re June 13, lavender & vine ... I keep telling myself I don't get jet lag, but nodding off when trying to write tells me otherwise.

Wednesday is market day in St. Rémy. After market, we will go to Carrières de Lumières in Les Baux for a spectacular light display of Picasso's work on the giant walls of a limestone quarry.

But first we head into market crowds in St. Rémy. We briefly browse market stalls and shops, but Melissa is drawn to a church for some meditation and prayer. I shadow her, because I don't want to lose her in the crowd and risk missing lunch at with our group at a crêpe restaurant near the entrance to the old city.

I'm amazed at her choice of the church. All these years that I've visited St. Rémy, I've assumed these tall steps and giant columns belong to a courthouse. Melissa takes me inside to a most beautiful church. 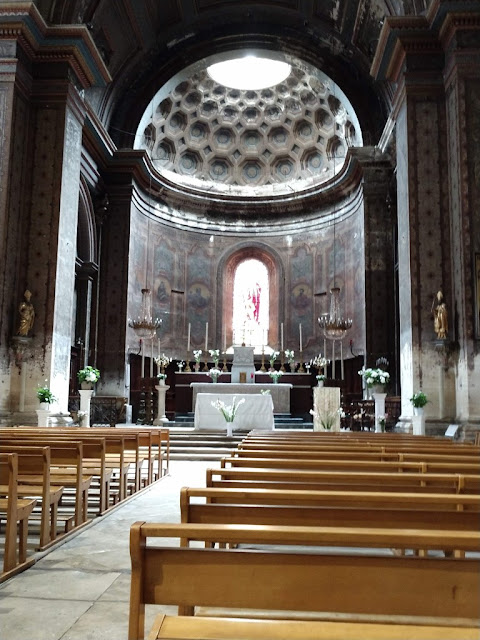 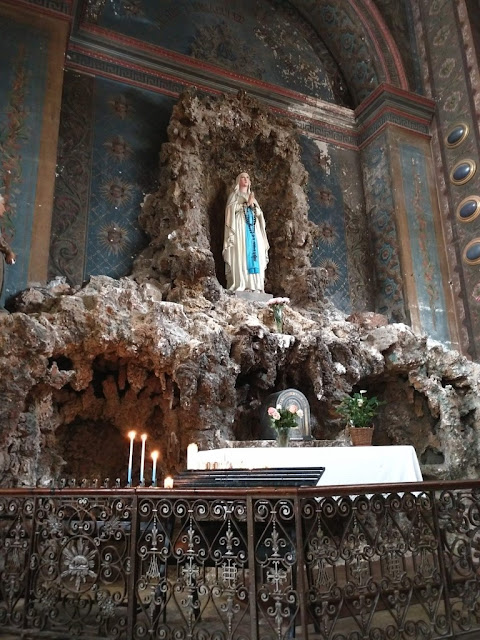 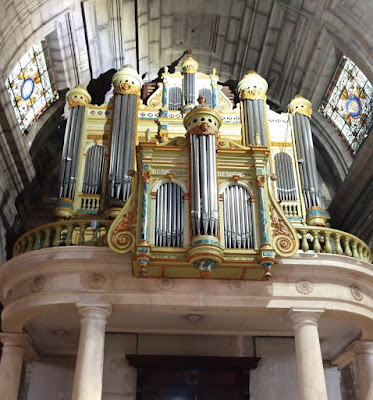 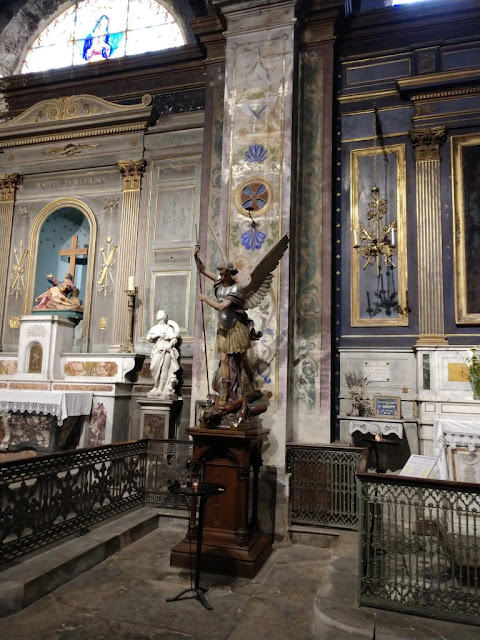 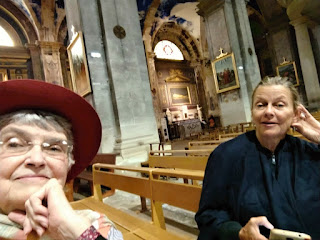 Well, we do take a break for a Café Liègeois at my most favorite restaurant, La Fontaine, before we carry on. It is made in the kitchen and delivered casually by a server. When personally delivered by a waiter, he pours the hot espresso over the ice cream, at the table, as a little ceremony. It tastes better that way. I should remember to ask . . . 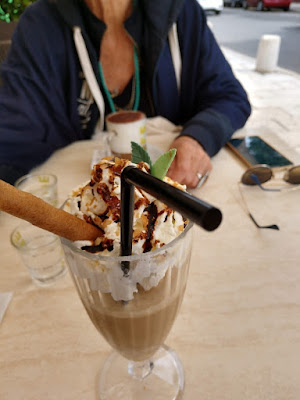 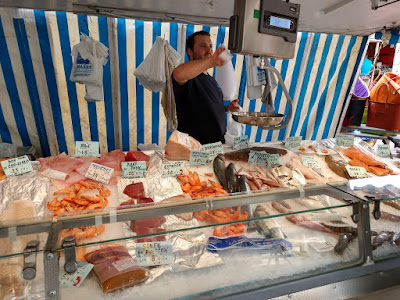 I have no pictures of the crêpes we consumed at the crêpes restaurant. We made reservations for seating outside in the patio along the entrance corridor when the weather was beautiful. Meanwhile, a mistral has come up and the wind rolls through the corridor like a gale. We cling to our plates and our crêpes and sit on our hats. With all our individual orders, no one is served at once. It's not a good photo op.


We've all been anticipating this afternoon's visit for a year, the show in lights, "Picasso and the Spanish Masters," at Les Carrières de Lumières, an old limestone quarry converted into a giant multidimensional light and sound theatre. I've seen exhibitions of several artists here over the years -- a compulsory visit if you're in Provence.

Hundreds of images move across rough limestone walls, ceilings and floors as viewers themselves move through the giant space, pausing as long as each likes on a convenient perch to watch the images glide or dash past.

The advent of digital cameras has really changed our ability to capture some of the grandeur. Even in the early days of digitals, you'd be lucky getting two or three pictures that are clear enough to make much sense.

I don't focus on individual art works. Rather I click my camera as I wander through, so you can get an idea of the mammoth scale of the production. I have a lot of pictures here. (Not all, by any means.) You needn't pause, just flash through to get the effect.

I steady myself with my cane (and Daughter hovers by my other side in case I tilt that way) as we step into darkness and I ease forward gradually, feeling my way forward on the rough tilting floor to get out of the way of those behind me in line. It starts here. 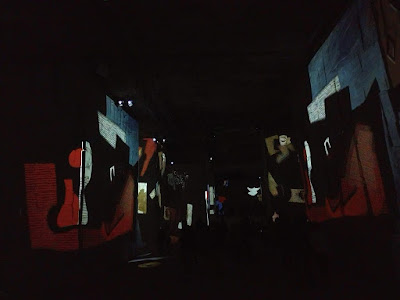 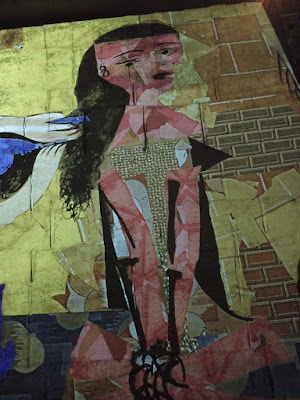 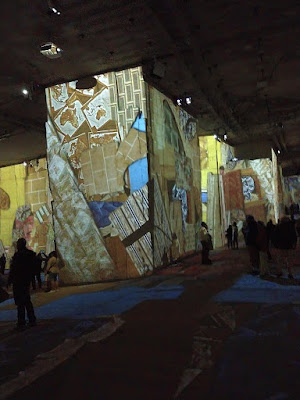 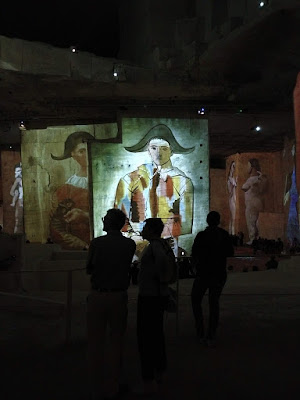 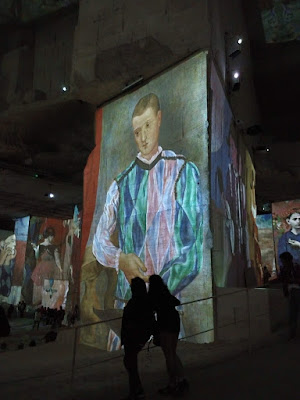 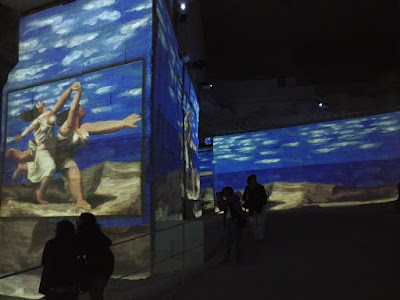 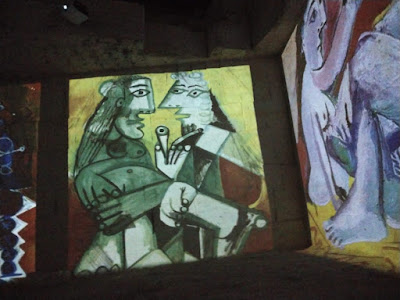 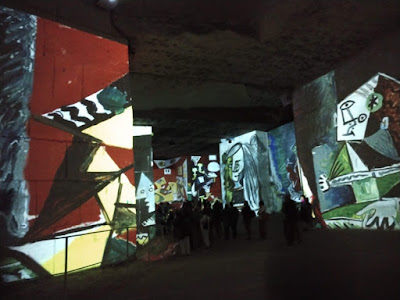 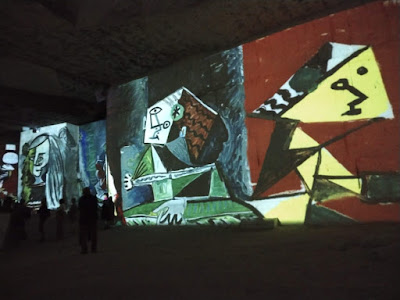 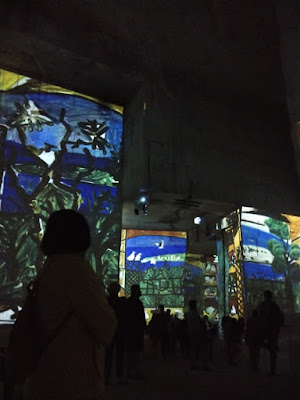 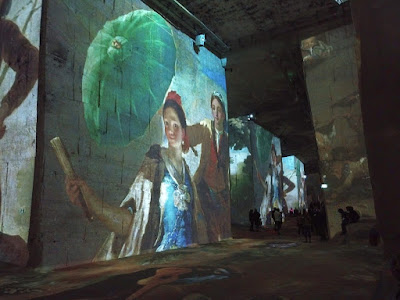 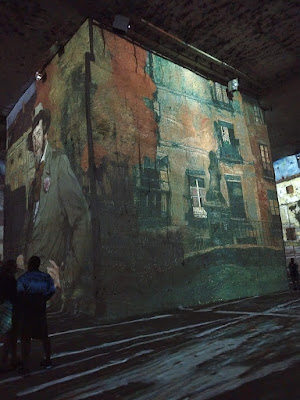 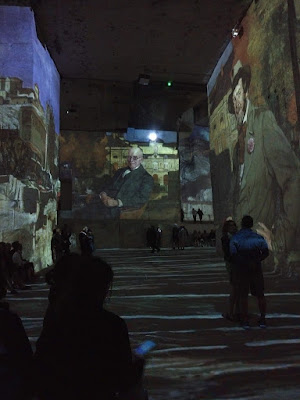 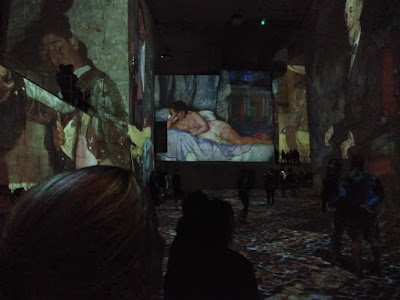 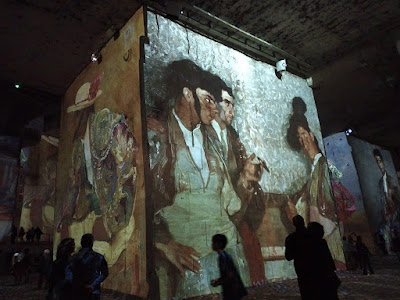 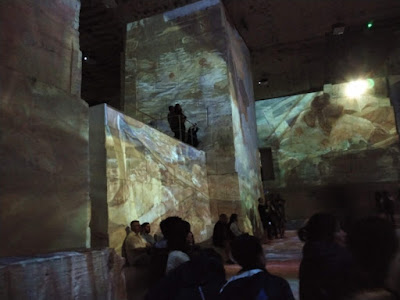 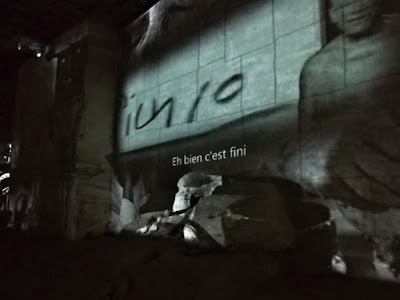 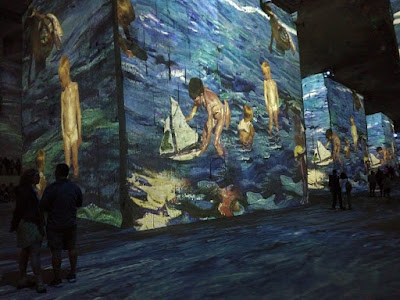 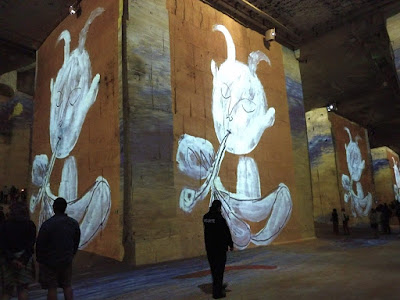 It's an interesting show, particularly for Picasso devotees, but I do believe that such uniformly angular art doesn't give the same experience as more flowing, varied styles and colors that other artists do.