Hot when we leave, hot when we arrive . . . And where is my suitcase?


There is a major San Francisco Bay area celebration on my Fly-to-France Day. The Golden State Warriors won the National Basketball Association Championship and there will be parades and partying during the day which multitudes will attend. Fans are urged to take Bay Area Rapid Transit (BART) trains to celebration venues to ease traffic and parking problems. It's a weekday, so this will add to the general commute crowding.

I'm accustomed to pulling my little "luggage train," a rolling backpack hitched to a rolling suitcase, through a crush of commuters, each lost in inner worlds of earbuds and screens, and even the very cool reading commuters, standing mid-car without tether, absorbed in a book. I have a hurry-up drill for boarding: a straight-ahead run into the train car so the wheels of the bags cross the threshold perpendicularly to avoid a tip-over.

Because of the expected crowds, Sister drops me off at the BART station earlier than normal. The airline already requests that I arrive at the airport three hours ahead of my scheduled flight. I pull my two bags smartly upright onto the station escalator.. All the benches are filled, so I wait in the blazing sun at the edge of the platform, ready to launch through a train door first.

I luck out getting a seat. I need one near the door where there's space in front of me for my bags. The train isn't completely crammed, but there's a goodly crowd of enthusiastic basketball fans, most of whom get off to transfer down the east side of San Francisco Bay to Oakland for the celebrations. (Yippee!)

As early as it is, passengers are already lining up at the check in counters at the airport. Some are at the do-it-yourself kiosks. I once printed my own luggage tag at home. It had precise instructions for folding and inserting the printout into the special holder. I don't have the special holder, and I'd rather wait in line and let them tag my bag and hand me my boarding pass than have to keep track of yet another special holder.

But, yes, I am one of those dorks who carries my ticket, passport and BART pass in one of those neck dangle things, and I let the little red PRIORITY logo on the corner of my online flight sign-in peek out visibly. It gets me steered into a short line.

I arrive plenty early. I kill some time finding lunch. I'm looking forward to one of the deli sandwiches or salads from the kiosk in the north lunchroom. Except that they've demolished that kiosk and the rest, and replaced them with a plethora of fast food take-out counters lining the walls. I hate it. I hate the food choices and the layout of the food places and the layout of the tables. I want a cool chef's salad, which would have already been prepared and iced at the old place. I order one at one of the stores. The salad is assembled piece by piece down the line and delivered in exact numerical order with people waiting for things that must be cooked. There are no instructions on what to do once you've handed over your money, so I wander back and forth on the line for 45 minutes before my one little salad is delivered. HELLO, SFO AIRPORT CONCESSIONS. I HATE THIS ARRANGEMENT.


There's lots of time to look at the various exhibits displayed in the connecting hallway between the gates in the International Terminal. Don't ask me what this is. I'm not even thinking about that. All I'm seeing is the shiny and reflections and the interplay of light and how to turn it into a sparkly photo.


Between one exhibit and the next, I pass the ladies' toilettes (it sounds so much fancier in French) and dodge in to get security-screening-ready. I wear a tourist vest, full of zippered pockets, in which I'll stash most of the stuff they'll want to scan: my watch, ring, change, neck dangle, my under-clothing money belt that has my euro change in it, and, don't forget, my little box of No-Jet-Lag, which once almost led to a strip search. Did you know that tablets packaged with little plastic bubbles, on a card that push through a shiny backing to be liberated, set off the scanner? We puzzled at length until the box in the lower pocket on my cargo pants was discovered.


I've finally earned enough travel miles that this is an Awards flight. My priority boarding pass gets me in a short line through security screening. But it doesn't seem like my special line is moving very fast. In fact, it's not moving at all. There's a big gap in the line and we're almost leaning forward into each other as if that will press us along.

Finally, a rope barrier across our aisle is removed and we race through several empty turns of the aisle and get stopped again just before we reach the conveyor belt. We've seen a security officer wandering around with his dog, but suddenly Man and Dog are all business, running up and down our line. The dog's tongue flops as he races happily back and forth, sniffing us. I'm normally afraid of dogs, but I have to restrain myself from reaching out to pat him with a "Hi, Doggy." I even have to resist making a smart remark to his handler.

And then they send us on, past the conveyor belt and baggage scanner, past the people x-ray, right on through.

"Aren't we going to be screened?" I ask one of the guards.

"You've been screened," he tells me.

(All that repacking myself into the vest ... unneeded.)

There's our plane! In all my earlier trips on this aircraft I had to walk to the end of the terminal to the final gates The big A-380s have multiple boarding entrances which need special gate configurations. This year its gate has been moved to the front end of the terminal. It saves a big walk. 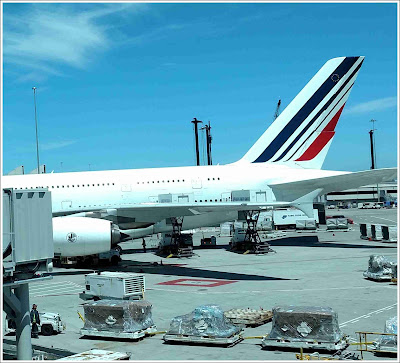 My requirements from the on board entertainment system are minimal. The A-380 has a forward facing tail camera, a forward facing nose camera, and a downward facing camera on the bottom of the plane, all available on-screen.  I love watching the tail camera as we move around on the ground and during take off. There are moving maps, showing our flight location. And flight stats. I eavesdrop on movies on other people's screens so I can keep track of where we are on my own screen.

Left to my own devices, I'll also stare out the window an entire trip, but over the years, there has been stronger and stronger pressure from cabin crew to keep the window shades down, even during daylight. Sure, people either want to try to sleep or look at their entertainment systems without glare. But I can't avoid a peek, and taking a few photos along the terminator. My phone camera doesn't do justice to the amazing clear colors. 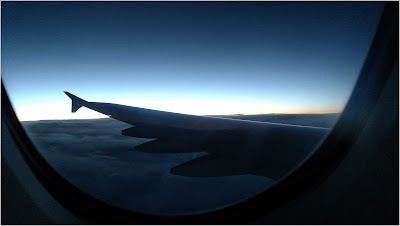 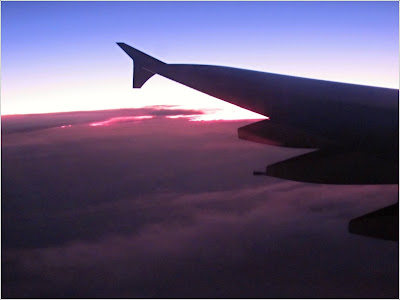 Our big plane is boarded and buttoned up in San Francisco on time. Then we sit, and sit, and sit. An excuse is announced.  Still fueling, I think they say at first. Then, we hear a passenger has fallen ill and awaits a medical evaluation. The ill passenger is removed. The passenger's luggage must be retrieved from the baggage hold.

With 500 or so people and their luggage aboard, we won't be leaving any time soon.  I start to calculate what this will do to my connection in Paris to Marseille. I need an hour moving at full speed (slow) to debark, clear customs/border control, go through a new security check, and walk a hundred miles to a gate in the domestic terminal (excluding a stop at a restroom).

By the time we're buttoned down in San Francisco, we are late leaving for Paris by an hour and a half. We arrive in Paris a little over an hour late, giving those of us transferring to the Marseille flight less than an hour to make it.

Subliminally, I guess, I incorrectly to assume that the dog security check, or something similar, will cover me here too. She who assumes ....  We line up by the conveyor belt for our new scan. I'm wearing my vest with many of the dingable items still in the pockets  and keep flunking the X-ray machine. I pull a suspicious item out of a pocket and toss it in a tray. Flunk again. I throw my ring loose into a tray. I worry that it will go astray. It's a ring my late husband gave me many years ago to wear instead of my engagement ring with a diamond that was mounted so high that was always hanging up on my clothing.

I race into the domestic terminal. It's big. It's Air France and this is France. I arrive before the huge lineup at the gate for my flight has started to board and I resign myself to being last to board. Until I  glimpse the red Priority sign, on the far side of the crowd. I push my way through, trailing my rolling back pack and dangling my too large red purse.

I wait at baggage collection in Marseille.  Suitcases appear on the belt, and are taken. Mine doesn't. The crowd dwindles. Did you come from San Francisco? I cast out to the lingerers. My guess is that the big plane arrived in Paris too late to make the luggage transfer for this short flight.

Someone shuts down the luggage belt, no longer producing the occasional lone suitcase. "Come with me," she says, delivering the lingerers to the lost baggage claim office. She starts helping a few with computer claims kiosks. There's a big line leading into the glass-enclosed office, waiting to talk to an agent. I start to join the line, see a red Priority sign at the back end of the office. I see a back door. I walk down uncertainly, getting the evil eye from my fellow luggageless passengers. Maybe I'm supposed to wait my turn at the front door. There's another passenger in there sitting at the desk with an agent. (The people at the other end of the counter are standing.) I poke my head in. The agent indicates I should wait outside until the customer is finished. It seems I am at least at the correct place.

"Your bag will be delivered to your hotel in two hours," he tells me after I provide him with my forwarding information.

I call my hotel to send its shuttle, and walk back and forth in the confusion of traffic (is construction still going on here?) between the two terminals that are being served here by buses, taxis and shuttles.  It's hot and I wander a while before we connect. The young woman who drives the van also checks me in at the desk. I have my rolling back pack, which she insists on carrying up the stairs to my room on the first floor. (The place we start at is called the ground floor.) She'll watch for the arrival of my suitcase.

How many hours have I been awake? My brain is too fuzzy to do the calculations and my phone resets its time automatically. The room is icy cold. I fiddle with the thermostat to make it less cold and flop face down onto the white duvet cover for a little nap.


**  For security reasons, these trip posts are being made after my return.