I don’t remember what initially happened that opened up the topic. It’s something that our generation – whose kid-hood was 70 years ago – never discussed or acknowledged. Not in our whole lives. I even hesitate to do it here. And now.

Maybe it was one of those Facebook posts that extol the carefree innocence of the good old days, when kids were sent out in the morning to play and didn’t come home until dark. 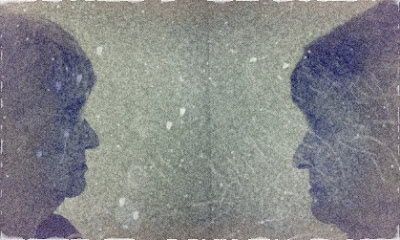 “It wasn’t all sunshine and roses,” she casually commented.

I only lifted an eyebrow.

“Well, not specifically. There are things I did as a kid that I wouldn’t want to tell my parents. But it’s not that so much ….  I do wonder about things that happened to me sometimes.”

She spoke first. “Did someone do something bad to you?”

“Well, I remember being at friends’ house with my husband one afternoon – he was a cop, you remember – and the couple were both social workers. They were discussing a case in the news about a child molestation, and I started to ask about something that happened to me when I was little. My husband shooshed me, I guess afraid I was going to make some embarrassing accusation against my parents. So I shut up and kept wondering. It wasn't at all about them. It was something else, so I still don't know what constitutes molestation but think it includes more than I thought.”

“I’m still in the dark." She shrugged. "Nobody ever talked to me about sex or molestation, although I sense that I've been warned about unknown bad things. I always thought molestation meant adults having actual sex with a child. But no one actually said that to me. That would be 'nasty talk.' These days everybody shares every intimate detail of their lives, but it just didn't happen in our generation. Still pretty much doesn't."

She smiled weakly and continued. “Okay, you tell me yours and I’ll tell you mine, Sounds like when we used to say 'if you'll show me yours, I’ll show you mine.'”

We both laughed. “You first,” we said in unison.

She started. “When I was four or five years old, I played with two little boys around my age who lived a couple of doors down the street. On hot summer days, we all, boys and girls, ran around in shorts or sunsuits all day long.

“Their grandpa lived in a little grandpa house in their back yard and he’d give the kids candy and cookies and invite us in to listen to his radio or Victrola.”

“Children these days would be warned about that,” I told her, anticipating that no good could come from this, given our conversation.

"Yeah. Well, we weren't. It was strangers we were supposed to look out for in case they might kidnap us."

"Yeah, my constant fear, even about the teenage boys in the neighborhood."

“One day I went looking for the boys and knocked on the grandpa's door. The boys weren’t there, but he asked me in for a cookie and to listen to the radio while we waited for them to come. I didn’t like that he hooked the screen door higher than I could reach, but I didn’t say anything. He sat down in his chair by the radio and coaxed me over to sit in his lap.

“I was eating my cookie when I felt his fingers touching my sunsuit, down there. Then he snuck a finger into the sunsuit and wiggled them on my little bare pussy. I'm not sure now, but that may not have been the only time that happened.”

I could feel heat rising in my face. “What did you do?”

“I ran to the screen door and yelled for his granddaughter, the boys' big sister.”

She took a deep breath, then released it explosively “I’ve never told that to anyone in the world, but awhile later my Mom told me I could never play with the boys again. She must have heard something from someone.” She teared up, with both relief and apprehension. “Is that molestation?”

I leaned across to give her a hug. “Damned if I know for sure, but I think it might be.”

“Mine was a neighbor, too, a young army guy. He and his 17-year-old wife and new baby, lived in a granny apartment next door. The owner of the house, a  blind old lady, lived in the main part of the house.”

“The old lady part sounds like us,” she said with a crooked smile.

“She probably wasn’t as old as us, but what does a little squirt know...."

“I liked to visit the old lady to ask her about what it was like to be blind, and I liked to visit the very young bride to see the baby, because I didn't understand how someone so young could be a mother. The husband was usually away doing whatever young army guys do in the daytime when they aren’t fighting the war."

My friend was waiting for the reveal.

“One day when I went over, the ladies and baby were away. The cute young army guy invited me in – I don’t remember why – but I went in and perched on the edge of the bed, which practically filled the tiny room.

“I launched into asking my usual questions about the war.”

“The war was on full blast. Papa was a block warden at home and worked at a defense plant a long ways away. My grandpa was an air raid warden. Somewhere I've got the greatest photo of a neighbor woman -- built like an opera diva -- lying on the lawn, and grandpa standing behind her decked out in his helmet and gas mask.  My uncles were in the navy and marines, and my youngest aunt was a hostess at the USO. We had black tar paper over our windows so enemy bombers couldn't see light from the houses at night.  We'd follow the war in newsreels at the movies and read about it in our papers and hear about it on the radio. Fifteen minute radio serials (along with the soaps) featured war plots. And there were the air raid blackouts. Mom made me a little Marine outfit and I tried to dig a foxhole in the garden. (Alas, I would never win the war that way.) Everybody was heavily involved with wartime.”

“Hmm,” she pondered. “I don’t think I ever gave it much thought. So what happened there with the cute Army guy'?”

“After awhile, he went into the bathroom, and I thought he forgot to close the door, because I could see him standing in front of the toilet and hear the clatter of his pee into the water.

“I was soooo embarrassed. I went over to the exit door and developed a major fascination looking out the window at all the activity -- none-- on the old lady’s back terrace.”

Her face reflected my embarrassment. “Jeez, did you leave?”

“No, I just thought he was forgetful until he came up behind me and I could feel this big hard lump pressing into my back. He took my hand and led me around to the other side of the bed, away from the door, and sat me down. He stood there displaying all his glory.

“’Have you ever seen one of these?’ he asked me. I said ‘Of course. My Dad.’ Dad had never presented a display like this, but he neither did he do the embarrassed cover-up if I walked in on him either.”

“Oh, you poor thing,” she exclaimed, “I mean about your neighbor, not your dad.”

“Yeah, then he asked if I wanted to play with it. No way! I made a cautious retreat, past him, not turning my back on him, and out the door. I had no idea why he thought I might want to play with it. I wonder if young bride wondered why I never came back, and I only visited the old lady when they weren’t home. Like you, I have never told anyone at all.”

This time, I received the hug.

“So I’ve wondered, too, whether that’s considered molestation.”

“Ah, for the good old days, where you could stay out all day and seek refuge with a caring neighbor if you’re in trouble.”

1.  Original blog post concept noted 6/21/15: no content. Title idea: She Never Told A Soul
2.  A number of women made accusations of sexual impropriety against Trump.
"Why didn't she report it twelve years ago?" (or twenty. or thirty)
3. 1st draft 10/17/15, 2nd day at Essoyes, Writing from the Heart
Consider "Ice breaker" as title or part of title
4.  Fleshed it out when a class assignment was to write freely; read aloud in class in 10/20/15.

The real reveal: Both sides of conversation are me. I finally have explained to myself, admitted to myself, that some things that happened to me that shouldn't have. Yes. That was molestation. Did it affect me? Hard to say but it's too late to be relevant.

Email ThisBlogThis!Share to TwitterShare to FacebookShare to Pinterest
Labels: Misconduct