Emerging from the isolation booth: A slice of summer


No. Not really. I've hardly been isolated ... just so distracted by a solid series of events that I haven't come up for a blogging breathe for several weeks. [It has now dragged out into several months, but I'll take you part of the way back.]

I have managed to chronicle a few happenings from my Provence sojourn in July/August, and reflect on the act of terrorism in beautiful Nice. I still may go back for a few chunks from the trip (I always intend to do that when I get behind), but I'll move on for now with a couple of photos from the last day in Provence.

A wine tasting at Domaine de Banneret in Châteauneuf-du-Pape is on our itinerary. It's a frequent stop for the tour, but our leaders have been unable contact the owners to set it up. Another activity is substituted, but on our way past Domaine de Banneret's neighborhood, we decide to stop in to see what's up. What's up is a major remodel.

The daughter of the family is applying blue paint to the large doors of the cave. She opens one door a bit wider so we can slide inside without brushing our clothes up against the paint. The interior of the cave has been enlarged. New wine barrels have been placed. Two men arrive with another one, rolling it inside. The father arrives and the daughter goes off to fetch bottles of wine. Before all is done, more people squeeze their way into the small lobby. The daughter puts up the paint brush, and an impromptu wine tasting gets under way. Our group buys wine, more people enter, and then more. More wine is tasted and purchased, and we make our exit and head for home. We'll be having our farewell dinner tonight on the terrasse. 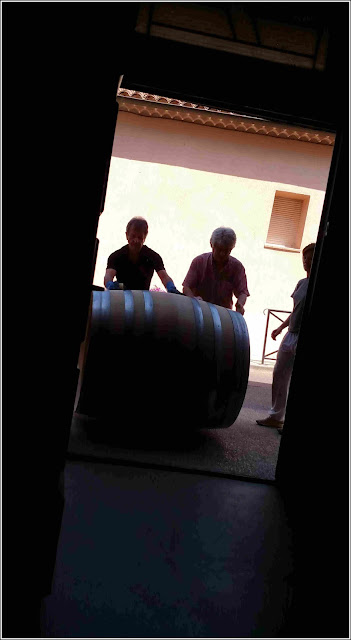 But we have one more stop on our way to the villa. My traveling companions buy wine. I buy bonbons at the chocolaterie: Pralines, Rochers and Verveine candy drops. (Sorry. I sampled one before I took the picture, disturbing the symmetry.) 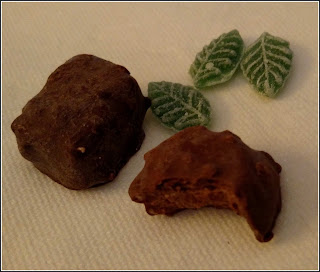 A couple of days later, I arrive home from my month-long absence to happy kitties and cat hair everywhere.

My former house cleaner gave notice before the trip, and I arranged for a new one to arrive after I get home. She appears at my door on Saturday, a bucket of cleaning supplies in hand, and digs into the chore. Now, I walk on clean carpets barefoot, taking pleasure from the scritch of berber on the soles of my feet. Baseboards and window sills sparkle. Windows don't, because I have neglected them for years. A crew with tall ladders will arrive next week to clean them inside and out, and wash the screens.

But before that, I get sucked in by a time vampire: the Republican Convention. Oh, not 24/7, just some of the keynote events, but still.

It finishes in a splurge of red, choosing The Donald as their presidential nominee. 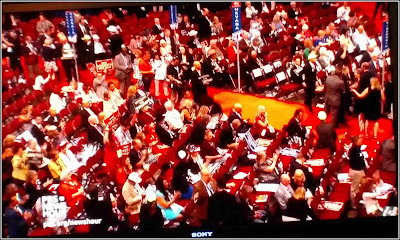 The crew of window-washers arrives on Friday and proceeds around my house with buckets and squeegees and towels and ladders. I am so excited to see clearly through every one of my windows that I take a picture of each. I can see through bay windows and see myself reflected in the big mirrored closet doors. Sparkle sparkle for the moment. Before cat nose-prints are redeposited and paw prints from fights through the glass with the cats outdoors streak lower panes. Some complex events take place over the next few days that are jumbled in my memory. Daughter makes two trips here (or more?) for a variety of tasks. A major one is to store some of her household goods and clothes in my basement, since she has sold her house in the city where she works and doesn't know exactly where she will live. She puts a bed in my former study to use when she visits, instead of sleeping on the couch. This will also provide more comfortable accommodations for friends who will be coming to visit in a few days.

We put up a few paintings in the new bedroom and in the living room. They've been wrapped and stashed since they were evacuated for the Rim Fire.

There is something to do with repairing her little motor home at a mechanic nearish me which requires pick up and delivery.

There is something to do with replacing the tailgate which was stolen from my truck while it was at her house in the city. This is a mini-fiasco, since the tailgate was not replaced with one with a step, which was what was ordered.

Daughter delivers her two cats to live with me while her housing arrangements are uncertain. This is Henley and Jean-Luc looking skeptical about the new arrivals. 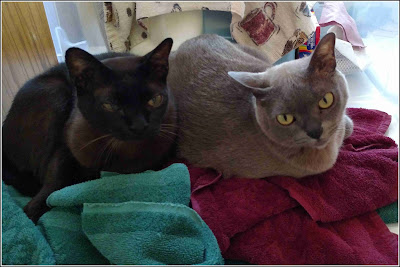 An amazed Camino and Pacha spot their first deer. As same-sized as they look, Camino is a big rangy boy and Pacha is a little fluff ball. Pacha was actually born here, one of the ferals, and required major surgery in conjunction with her spaying. She and Mama cat went to live with Daughter when Pacha was quite young. There are still feral cats outside, so I'm reluctant to let the new insiders go out. They are wise to the ways of the city, but not to the threats from other wildlife around here. 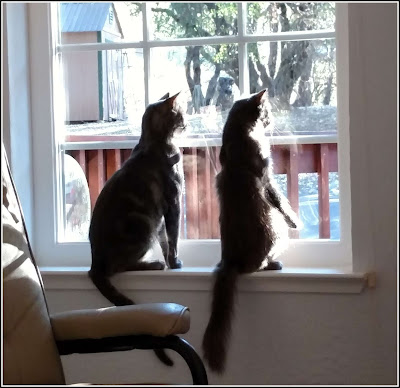 Here's Pacha in her Halloween cat pose, just because I love her shadow. 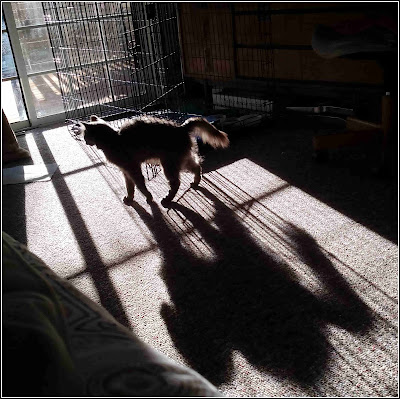 Here's the big boy, relaxing. He is used to being the kingpin. Jean-Luc considers himself top cat. Henley is mellow. Pacha hisses when anyone gets too near. Everyone has recently been put on an anti-stress diet. Sometimes I cry when the kitties don't get along. 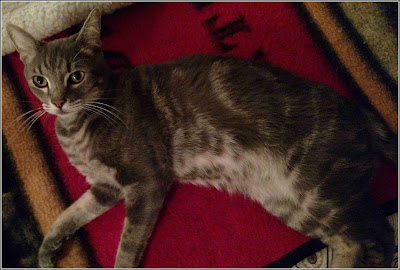 We are into the Democratic Convention. I've been a convention junky since I was a kid. I was home alone on the final day of the Republican Convention that nominated Eisenhower in 1952. (I had  just turned 15, the first convention I'd watched on television instead of listening to on the radio.) Ike beat out the more conservative Taft sometime in the afternoon after a long process of voting among delegates. I was overjoyed and raced outside. Whooping and barefoot, I ran down the middle of the street, searching for anyone I could share my joy with. At the intersection, I ran into the vice-principal of my school. He greeted my news with a dour expression. I was in Taft territory. My memory is a bit hazy, but some time-checking suggests this was my last election rooting for a Republican.

Now, after a few days of C-Span, I celebrate that Hillary has won the Democratic nomination for President. 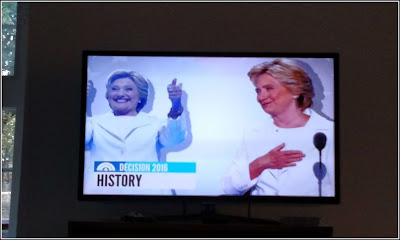 Sister, thrilled that Daughter and I had started mounting paintings on the walls after all this time, arrives prepared to hang more. Lots more. Here's one wall of my bathroom, for example. The color of the photo is off. The seashell painting has pinker tones to it. 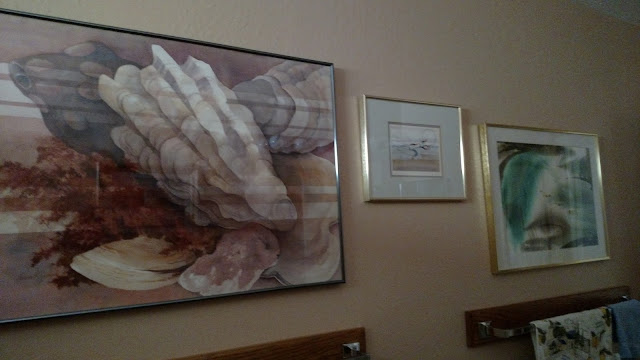 Papa made this stained glass art piece. It had been hanging in their house. Brother-in-Law gets credit for hanging it from the window frame, which does not turn out to be an easy task. I believe Papa created the glass piece based on a painting, seen below. 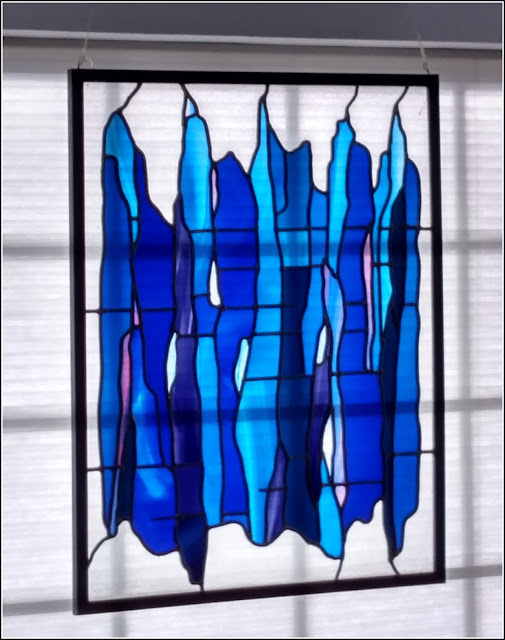 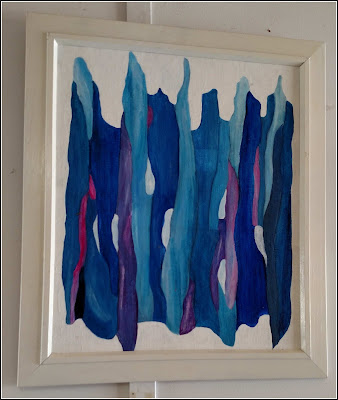 My friends Len and Shauna arrive in early August. They live in British Columbia and are touring the West Coast. I haven't seen them since we labored together in Saint-Victor-la-Coste, France, on castle and village restoration in 2004 at a project called La Sabranenque.

Uncertain about their arrival time, I've made late dinner reservations at The Grill, our development's eatery at the golf course. I ponder again my menu choice and select again the grilled salmon with an orange sauce. I love the crunchy tang of the sauce it's grilled im that I cannot duplicate at home. 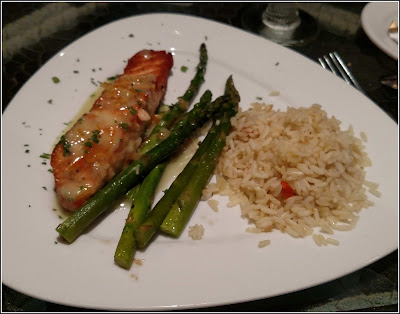 I persuade them that they have come this far and must visit Yosemite Valley, barely more than an hour away. It's a summer weekend;  traffic will be horrific and parking will be well nigh impossible. But I'm a local and I have a plan. To see the most of this beautiful area without getting bogged down in the traffic, I book seats for us on the Valley tourist tram and suggest an early departure from home.

It's hazy out there this morning and I ponder whether to take the time to stop for the traditional Half-Dome-in-the-distance-photo driving in. Here's Shauna with the familiar profile of Half Dome in the faraway notch. It looks tiny. 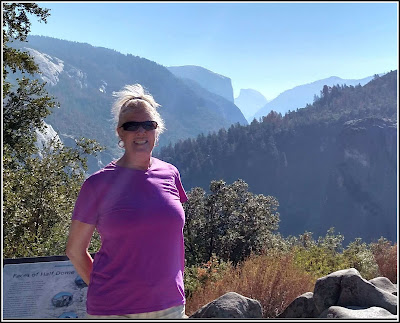 I ignore directional signs for parking areas and head for my favorite spot. I luck out, and from there we make our way to the Ahwahnee Hotel. (I refuse to use the phony names for classic Yosemite spots that have been slapped on them as a result of a lawsuit over trademarks, so Ahwahnee I call it.) It's an impressive starting point, and we can use the Valley shuttle system to Yosemite Lodge for the departure of our Tram tour. 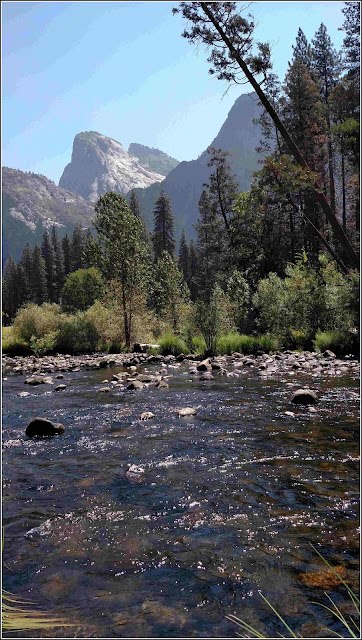 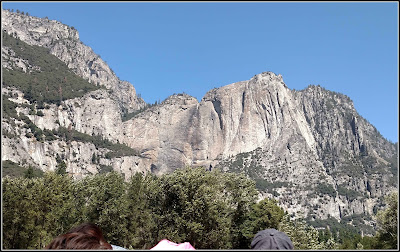 Alas, the haze renders many pictures less than stunning. For the full experience, you must come here to see for yourself. 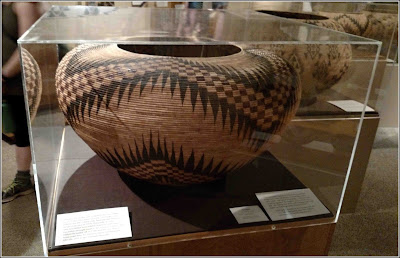 The next big time-sink is the Olympics. Over two weeks' worth of swimming, volleyball, gymnastics, rowing, horse jumping, and more.

Perhaps even during the Olympics, I transition to dishwasher tending. I wake up one morning and the bottom of the dishwasher is full of water. In fact, I find water on the floor of the adjacent cabinet under the sink. I empty out the cabinet and begin to bail water out of the dishwasher. 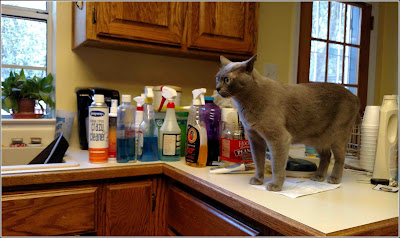 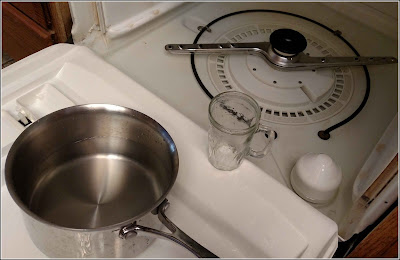 Bailing takes quite awhile and I have to keep getting up
and down from the floor to empty  the pan out into the sink.


I'm guessing the pump isn't pumping. I ponder. Do I spend a bunch of money for a plumber to try to fix my 27-year old dishwasher, with its mineral-crusted parts and rusting racks? Or do I go for a new one?

Easy choice. But meanwhile, the bottom of the dishwasher fills again within hours, even though I turn the valve off at the water intake. I figure out how to siphon the water out a bit faster than bailing, although it takes a practice not to spill half of it on the floor.

It takes a few days for the new dishwasher to get picked up by my plumber, to get modifications to the electrical, and to complete the installation. I like my old black appliances, but  ... I don't know. I think there is a prevaiing social pressure to choose stainless over black. It is very quiet in operation, though. 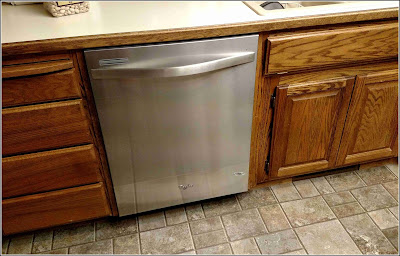 And then I find out the clothes dryer isn't drying.