Rallying 'round "We are Niçois"

I got interrupted by a couple of political conventions in the course of composing this. There have been subsequent acts of terrorism, but I stand by my conviction that we must not let those acts stop us from living our lives as we would. You've heard about the horror in Nice. You've seen bodies, discreetly covered with tablecloths from the restaurants that line the Promenade des Anglais, where 14th of July celebrants were mowed down by angry man with a huge refrigerated truck. He zigzagged to maximize the fatalities, he even is said to have shot from the truck window. Over 80 have been killed, others' lives are still hanging in the balance. The perpetrator of the carnage was killed by police.  I posted the following on Facebook the morning after.

I've visited Nice many times, walked on the Promenade, pressed through crowds at Market, taken pictures of the beautiful (but stony) beaches. I've just returned from nearly a month in France. Following other recent terrorist acts in France, I think we always remained alert to the possibilities, but we have to live our lives based on probabilities, or we'd never leave our houses.

People are questioning in social media what the modern world has become. But I recall just in my lifetime the wariness and vigilance we experienced in the past when traveling abroad. My first trip abroad was in 1959 and DH and I were in crowds shoved around by the Guardia Civil in Spain. The next trip wasn't until the early '80s, but a day or two after DH2 and I walked out of the beer gardens at Oktoberfest in Munich, a trash can which we had surely passed, was blown up, killing several.

I began my frequent visits to Europe, particularly France, in 1999, and have always been aware of the vulnerability of my surroundings.

Nine days ago friends and I were having dinner in an outdoor cafe in Orange, France, when a loud sound, a shot-like sound, rang out on one of the side streets leading into a square. Time stood still. The wait-staff paused, looking in the direction. I glimpsed under the small cafe table as a possible refuge. Wouldn't happen. I think I unconsciously counted, then took a breath when there was no repeat. Life resumed. But it sounded so much like a gunshot and not a firecracker or backfire.

Now with Nice, and the growing sense that things are out of our control, I began reaching back into my recollections, déjà vu, and began to Google. I don't know whether it's more settling, or unsettling, to know that:

"One common misconception is that terrorism is a new and unprecedented phenomenon. In actuality, terrorism is not an invention of modern times. Indeed, the very words we use to describe terrorists show what a timeless phenomenon it is."

This is an excerpt from a short course on terrorism, which can be read here.


I will not let the recent images of Nice take away my beautiful memories of a beautiful place. I will not let the haters of the world make me a hater. I don't know whether you've ever been to Nice, but I don't want your only images to be those horrific ones.

I blogged about Nice after my quilters' tour had a stay there in 2013. My son accompanied me on his first trip to Europe. That blog, here, has my most recent photos from Nice.

I sifted through photos from other trips. Not the first trip. (Those are old-fashioned paper prints on the scan-someday list.) Some of those are splendid, through the eyes of someone newly seeing a beautiful place.

Nice is at the eastern end of the French Riviera, or Côte d’Azur, which starts in the west at Marseille. That coast is an eclectic mix of rugged seaside beauty, maritime activities, smaller villages, and playgrounds for the rich and famous. Nice perhaps falls closest to this last. I took this June 2003 photo, looking westward from the rising coastal roadway. Nice proper lies within the arc with the lighthouse at the near end, westward to the left edge of the photo. There's misty coastal air, softening the view of this sparkling coastline. 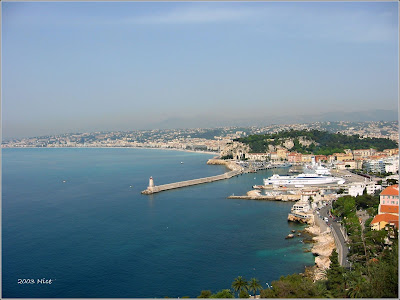 That's me, sitting on the rail of the Promenade des Anglais, just above one of the posh, rocky hotel beaches below. Those were the days when the travelers' uniform was the black pants, light top, and all-purpose tourist purse slung over your shoulder. I stuck with my Birkenstocks on my problematic feet, considered terribly casual at the time. 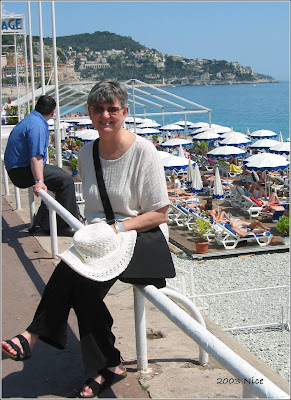 My next visit was in late September 2004. I'd signed up for two sessions at La Sabranenque volunteer historic restoration work projects in Provence. There was a week's break inbetween sessions, and I rented an apartment in Nice to spend my time off. It was at the late end of the summer season, too early for the winter season. It was calm and restful. No crowds, no hustle, no bustle, the beach concessionaires striking camp and packing up. I walked and sat for hours along the Promenade, taking pictures.


The Nice airport is not too far west of my apartment, and I can watch planes crossing over the water at what seems hardly higher than eye level. I'm not fast enough with the camera to get photos of them, but still have vivid memories of small private planes and midsized airliners silhouetted against a blood-red sun at sunset.


This guy stands outside of the Hotel Negresco, perhaps the most recognized landmark in Nice. If you saw any news conferences from Nice after the attack, they may have been held in front of the Negresco. (I saw at least one from there.) The criminal drove the truck from west to east right past the Negresco, right through the holiday revelers.

The Negresco has a large reception area inside with an extensive art collection. I picked this formal family portrait as just one representative. It must be a famous portrait, but I can't find it on the hotel's website, nor by Googling "portrait of three dogs." Perhaps it's a traveling exhibit. Some of the odd light on it is reflections of windows. I think what pulled my attention to this piece out of the lot is that the subjects of the portrait are each looking in a different direction, not what usually happens in a portrait. "She" looks like she thinks I'm eavesdropping on something personal. "Butt out." 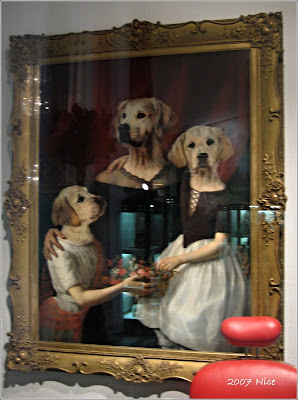 There's the ornate St. Nicolas Russian Orthodox Cathedral in Nice -- on which a two year restoration has been recently completed -- first completed in 1912 with acknowledgement of the financial contribution by Emperor Nicolas II toward its construction. As well as being an amazing place to visit, there's a fascinating history of legal wrangling between France and Russia over ownership of the edifice, with recent findings. Read about it here. 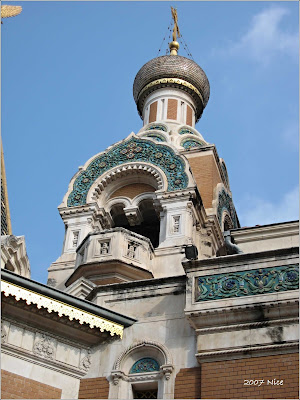 The Riviera near to Nice is dotted so many beautiful places to visit. I'll finish with a couple of views of the opulent Villa and Gardens Ephrussi de Rothschild in St-Jean-Cap-Ferrat. The villa is effectively a museum of antique furniture, paintings, statuary and other artworks. There are several theme gardens, with plants typical of different regions of the world. Google the Wikipedia entry for more information. The villa's operation is apparently under the operation of CultureSpace now, and its dynamic website is just too dynamic for my taste.


I'm so fortunate to have the opportunity to travel, to Nice, the Côte d’Azur, and other destinations, although I do admit to having a soft spot for France. As long as I can keep moving, I'll keep traveling and I don't intend to let those who threaten violence stop me.  And I damn well intend to enjoy myself.