High anxiety is turning to despair as Jean-Luc realizes that his worst fears are becoming reality. Mom really is going on vacation. There are the obvious things ...

... the selection of wardrobe, 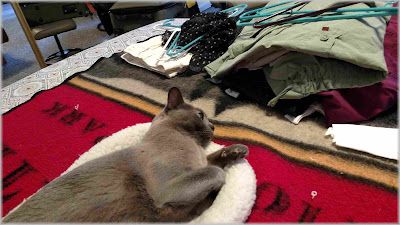 ... the coloring of toenails. 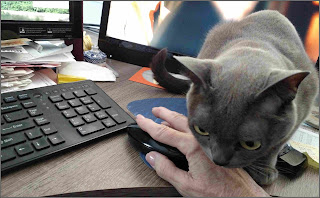 The printing of the boarding pass ... 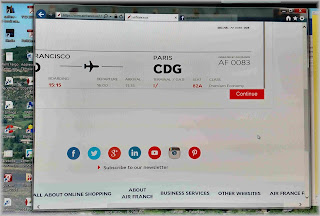 I cannot take a picture of Henley as he clings to me, front paws around my neck, and I gently pry him loose and put him down with a last skritch of the neck.

Sister and brother-in-law and I are on the BART, heading for the airport. Sister receives a phone call of some importance, and I can't believe she can hear anything as the wheels of the train shriek along the rails. 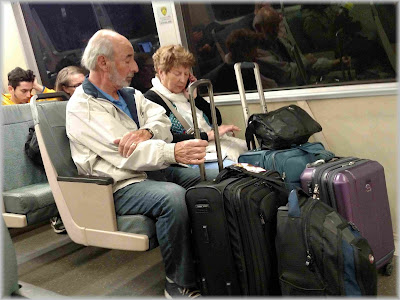 I'm sitting on a sideways bench seat, gripping my bags between my knees so the swaying won't topple them. 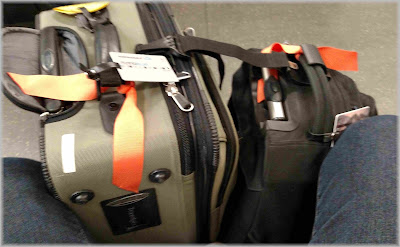 The good news is that this is the last day of the strike in France of the domestic flights within France. Our flight from Paris to Marseille will resume operation tomorrow when we arrive at Charles-de-Gaulle. We tend to shorten that to CDG, but I notice the French nearly always using the full name of the airport.

We're getting closer, only about 3½ hours to go. I no longer pay attention to how many hours there are in this flight across country and ocean. It is what it is. We only hope we'll get there in time time to make our connection. We have only about an hour and a quarter to taxi, deboard 500 or so people from the A380, take intra-airport transit to the customs arrival area, go through security screening once again, sprint from the international terminal to the domestic terminal, and board our new flight. We try to persuade ourselves that since we're Air France passengers, Air France will wait for us. 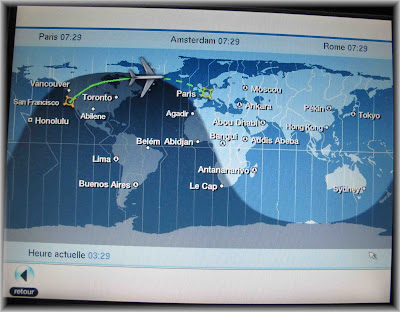 The crew likes to keep the window shades closed and the cabin darkened for most of the flight. I'd rather sit with my nose and camera pressed to the window the entire trip. I annoy everyone who's watching a movie or sleeping when I pop the shade up to catch this pic of the wing of the plane that seems to stretch to infinity. 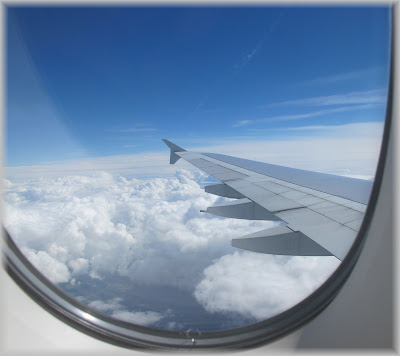 We land, almost on time. But then we taxi, and taxi, and taxi, passing over roadways and other busy-ness of a city. And we pull into the gate and all the accoutrements of egress must be unfurled. We collect our hand luggage and press into the aisle. On final arrival in Marseille, we'll kick back until all the other passengers have cleared out. We have no one meeting us at the gate and no urgency to get to our hotel. But now, anxiety has us in its grip.

It's the second security check that is so annoying. We're in a priority line, but it's the aggravation of taking off belts and watches and other bell ringers that's so, well, aggravating. I zip most of my "loose" stuff into the pockets of my travel vest and send them through the scanner. Laptop in its own tray. Somehow, it takes three or four bins to wrangle just my stuff through the line. At least I'm old enough now to leave my shoes on. But why do my knees and left wrist need extra scrutiny?

I'm regrouping on the other side of the inspection, slipping my belt through its loops, when swish, it pulls all the way through and out. My belt is reversible, so the buckle clamps on as part of the reversing mechanism. Only it's not there. It's not in any of my bins. It's not on the floor. It's nowhere to be seen. I join another frantic passenger who cannot locate his ticket in yammering at security personnel. I walk back toward the barrier between us and the Great Unscreened, querying every agent along the line. I'm oblivious to the queue of passengers slogging along between me and them, just wanting to get their business finished. My belt hangs slackly in the loops. I'm imagining my jeans slithering to the floor.

Suddenly there is a little flurry and the free-roaming agents direct me back to the guy on the bag x-ray machine, who is waving my buckle in the air.

Much relief, many thank yous. It's a little silly, looking back, that I'm so frantic over a belt buckle, but it's my belt buckle, it has seen me through many years, and the thought of its lostness, and what will I do, overcomes logical thought in the situation.

Saved by strangers, security agents, at that, who probably receive more complaints than praise, who are super to me.


I'm not a very fast walker these days, but it turns out we have plenty of time to make our flight. (Thank you moving sidewalks.) I get separated from Sister and BIL so push my way through the crowds in this wing of the domestic terminal, every boarding gate jammed with the pent up demand following the strike. I shove directly into the priority lane, a no-line line, race down the ramp into the plane, and find Sister and BIL already seated, possibly the only people on the plane so far.

The flight is completely full. We were able to choose seats when we printed our boarding passes, so we're near the front. I'm on the aisle by virtue of our order of arrival at our seats. Once underway, I'm warm and I take off my travel vest and stash it in the seatback pocket in front of me.

Time passes, I cannot recall how much.

A tap on the shoulder turns my attention to a man seated across the aisle and back a row. Wordlessly, he points to the floor of the aisle beside me. I look. I see a round gold band with the glitter of stones along one side. You'll have to imagine my flood of emotions and what ifs, as they're beyond words as I recognize my wedding ring there on the aircraft floor. Effusive thanks to the stranger who has saved something of sentimental and monetary value.

The problem arose because I'd stashed my watch and ring in a zipper pocket in my travel vest for their journey through the security scanner. I'd snatched my watch out after the scan and the zipper had stuck, unnoticed, crossing a seam, leaving an open gap that allowed the ring to fall out when I haphazardly stuffed the vest in the seatback pocket.

Saved for the second time by a stranger in mere hours.


We have booked two nights at our Marseille hotel, supposedly to ease jet lag, but inevitably, on our rest day, the what-shall-we-do-today question comes up. BIL needs to talk to Orange, the French telecom company about his phone arrangements. Research begins on nearby Orange stores when this message comes to BIL on his phone. 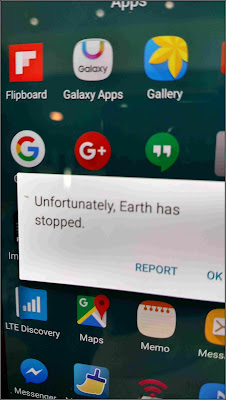 We look around. So far, other diners are still dining, as are we. Something has been greatly exaggerated.


On our day of rest, we head out by cab to the mall. Turns out that hotel shuttle service only takes us to and from transportation points (airports, for example) and not shopping. The cab drops us by one of the mall entrances. For our return, just call, right inside. We envision a kiosk, like the one at the airport that brought the hotel shuttle to pick us up.

After the encounter with Orange, after lunch, we lèche-vitrine, French for window shopping up and down the mall. We find an enormous appliance store, Boulanger, and marvel at a vast selection of refrigerators, in every imaginable height, width and capacity. Here Sister does her Vanna White impression of tall-skinny ones. 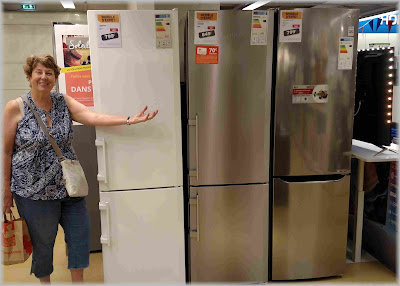 More, in varied dimensions. The same kind of variety goes for stoves, dishwashers, washers and dryers. It's amazing. We contemplate sneaking some home but there's the whole issue of the 220 wiring. 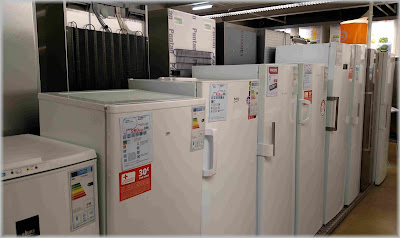 Finally, our feet give out and we head back to our port of entry to call up a cab. No kiosk. No clue. We wander the length of the mall again, checking each port of exit, searching for an info kiosk. Anything. Nothing. We go outside and survey the roadways that run in front of the mall. Cars rushing, no particular area for stopping. We read the glass etchings on the glass beside an entrance of things the mall offers. There it is: taxi services. But this is only a list.

I approach a mall security guy standing on the sidewalk with my most polite "I'm about to interrupt you" speech in French, and ask how we find the taxi promised on the list. This may be his first inquiry ever on the subject. He calls into HQ. I think I hear that we might have to go back to the Orange port we originally came in through, but this doesn't solve the problem of contacting a cab.

He uses his phone to call the cab. It is the busy hour. There are no cabs. None. Nada.  Rien. He calls our hotel to find out where it is, since we, although we have the address, do not have a description of how to get there. More phone conversations ensue. He tells me that if we can wait a few minutes (maybe he says five, maybe he says 15, maybe he says when he gets off work), "I will drive you there, without charge," this last in English. We talk more, to make sure we completely understand.

He goes off to get his car, and a short while later, arrives, blocking the single lane of roadway in front of us. We dash to the car, BIL, having to get out again to lift the front door up to get past a hitch in its git-a-long, to close it..

Heading back into our hotel zone, he takes the wrong fork at a Y and we're wandering through airport roadways. He tries again and we get lost in another hotel's traffic pattern. He phones again, then heads back, again taking the wrong fork, and drops us off at the airport. This may have been intentional, since he points us in the direction of the hotel shuttle pickup spot a short hike away, where BIL makes the call to the hotel. We are all rescued this time by the kindness of a stranger.


I cannot resist a photo of this sign in a construction area in front of the airport that we walk past, given the name of this blog.  "It is the sardine that blocked the airport."  It's a modern play on an ancient play on words.  I make guesses as to its meaning in the current context, but it's subtle beyond my French history and language capabilities. Perhaps an environmental vs. development concern? 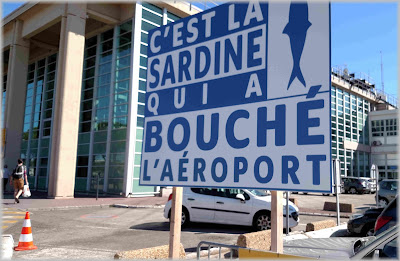 Back at the hotel bar, with its lovely floral arrangements . . . . We wind down. 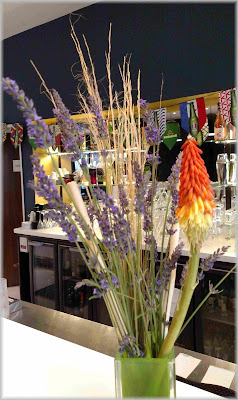 And here's my ultra modern hotel shower (with me reflected in the shininess). Even with a shower door, it still does not solve the flooding problem I experience with French shower arrangements. I do love the mechanics of these showers with an easy on/off arrangement that delivers your perfect water temperature each time. The bathroom has a blue light, for night use, I presume, but it lights up the entire hotel room if you leave the bathroom door open. 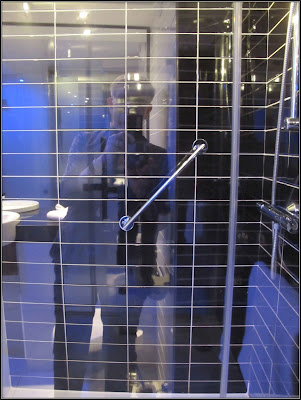