The Bed, the Woodpile, and the Oversight


My last blog was Number 500. I'd been looking at my tally, waiting for that number for quite awhile, what with my slower pace of blogging. It seems a bit of a milestone, deserving a little celebration. Too late. 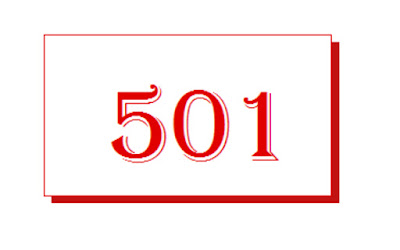 Okay, the crummy paper plates and drink cups are out of the way now. Time to try to put something orderly down about a period of nonlinear time. Or so it seemed.

If I want to put bookends around it, it's getting the deck re-stained. I'd had it done several years ago. It was a fabulous job and the product shed water like a duck's back. Shortly thereafter, my pest control folks found termite damage, including in the deck. Out went the affected boards, in went replacements. I requested that the same product be used on the new boards, but I don't believe it was. Because, while the original refinishing still shed water like a duck's back, the new planks never did, and they became an ugly dry patchwork. I went back to the original company and product for this job.

Here it is, after re-staining, waiting to cure. All the deck furniture -- a raggedy wooden bench, a patio table and chairs with a tattered cover that provided a hideout for the feral cats, a Rubbermaid shed with firewood, a gas BBQ, a couple of smaller Webers, a really good cat igloo and a couple of carriers for shelter. In other words, stuff, all now piled in the driveway. 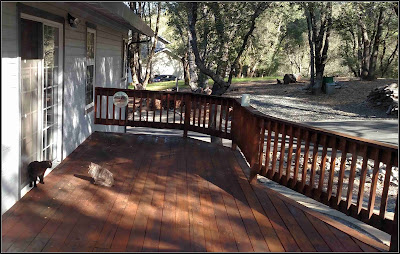 Time passes. Life goes on. There are the regular things. Except the part where I discover my occasional French teacher is offering an advanced intermediate, or advanced beginner, or maybe intermediate beginner, weekly French class at the community college. It's quite a drive to get there, so I have to get up early that day. My intention is to tune up my French for my trip this summer to Provence (surprise surprise). I've discovered the entire course, which has been going on several classes worth, is to tune up for a class trip to France next summer. I didn't intend to go, but then I signed up . . .

Flowers are springing up in the planter boxes out front. This may be a weed, but it makes pretty fluff balls. 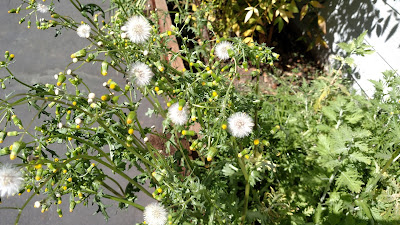 The iris is intentional and I like the shadow on the wall. 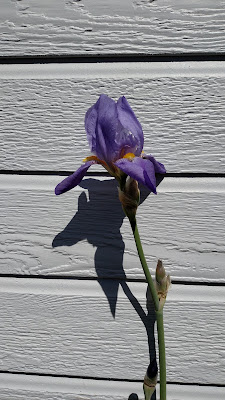 An encouraging milestone occurred. Ever since I fell on my head last fall, I've had a problem with walking. A lot has to do with a crisis of confidence, some to do with pain in a leg and hip, all leading to a lack of exercise and resultant weakness. Oddly, chronic back pain for which I've been getting shots for years, has eased. I'm doing safe walking in the levelness of the house, building up leg strength.

It doesn't sound like a major accomplishment, but enough that I came back to take a photo of the steps. They're not very tall ones, but I had walked up without holding onto the side of the deck and without falling on my face. I did a fist pump. 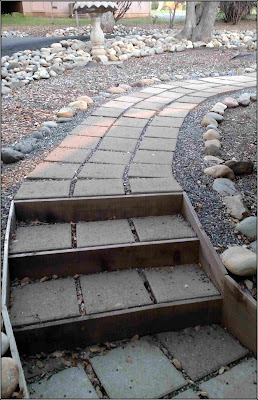 The drought over the past several years is killing the forests around us and among us. Cedars and pines have been hit with bark beetles and once beetles kill a tree, they move on to continue the killing. Quite by surprise, heavy logging machinery appeared in the thickly forested area between the pizza parlor and the grocery store, and began taking down trees and hauling them off on big logging trucks.

All around us, we're starting to see through filtered forests that were as dense as walls. 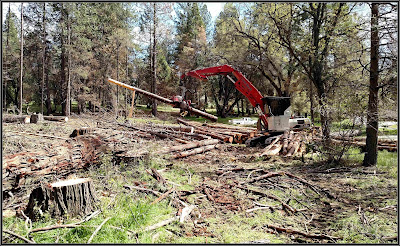 Almost more mail than I could carry one day at the post office . . . 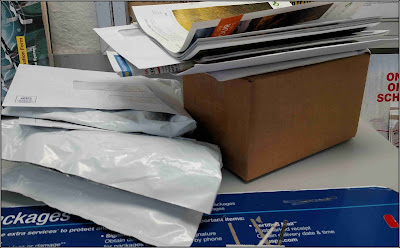 A lupine bush at the community college when I go to French class . . . 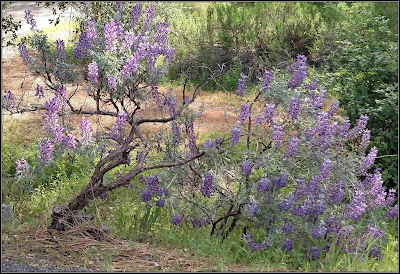 One cat is a bad boy. Jean-Luc (who shall be nameless) has a problem with inappropriate peeing. I despair. I've tried a lot of things. Mostly I fall back on a pretty good spray for cleanup. Sparing you all the gory details of his preferences, I discover that the little scent that drifts up when I go to bed is a good soaking of urine in the back corner of my memory foam mattress. I soak it with my pretty good spray and press clean white washcloths and paper towels repeatedly on the wet area and move myself to the other side of the bed.

At last I decide it's a hopeless battle. The mattress is very heavy. I can't move it around to work on it. I doubt I can ever remove the urine with my spray and press method. I order a similar model from Costco and arrange for the strong guys who do my garden service to take the old one to the dump and and put the new one on my bed when it arrives.

You can see on the steps to my front deck how the water beads up after being treated with the new stain. I'm happy with that part. I'm not too happy that a guy in training on the pressure washer did the pre-wash on the front deck. Pressure washing is strong stuff. 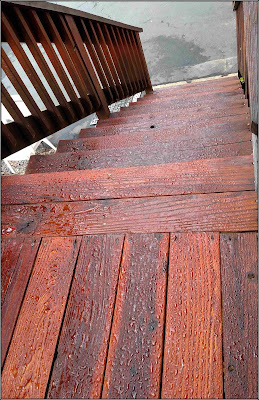 We are happy to be interrupted by rain. 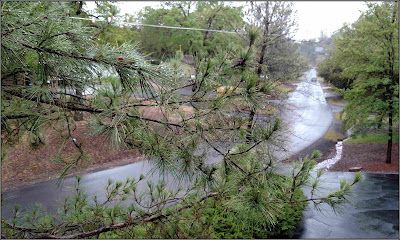 On my trip to the community college . . . enlarge by clicking, because it's the little purple flowers amongst the fresh green of the field that I try to capture, along with the brooding skies. 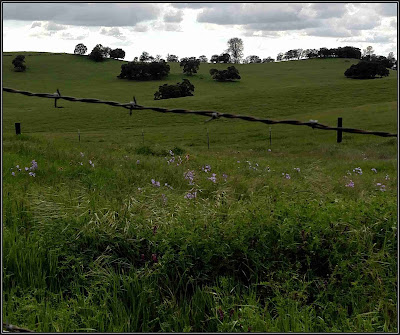 On the way home, I see sunlight on the penstock, bringing water from Hetch Hetchy reservoir in the east, bound for San Francisco, and generating power. I seldom notice the penstock lit up like this. 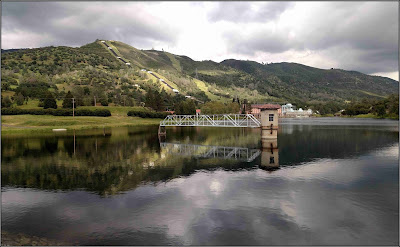 See? Like a spotlight emerging from the clouds, lighting the penstocks and the face of the powerhouse . . . 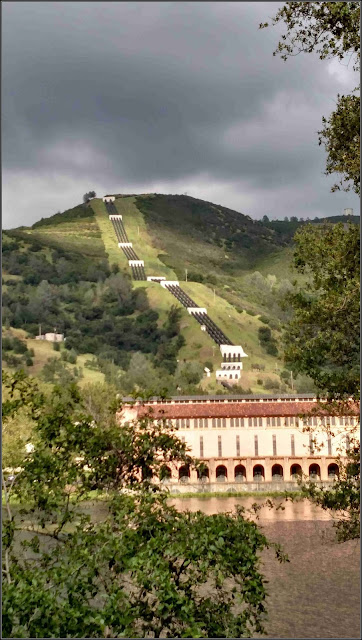 It doesn't take long for the mattress-in-a-box to appear on my back deck. With the iffy weather we're having, I hope I can get it inside the house. At first, I can't even budge it enough to get the nose plate under the box. When I get it under the box, I can't tip it up to roll it. I get my very best rope and tie the box to the cart and still can't tip it.

Well, one thing I can do is drag it across the deck and into the bedroom through the slider. Wheels help a little. 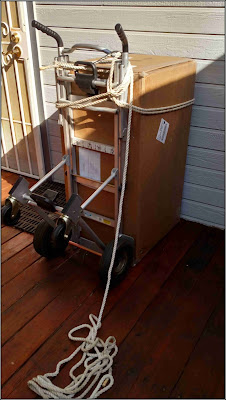 There it is.  (Someone queried whether I thought it was trying to run away.) 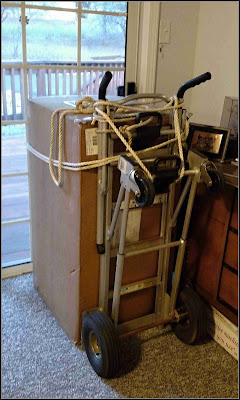 The strong guys are scheduled to come help, and to take the rest of my trash to the dump along with the old mattress. While I wait for their arrival, I move the small things still piled in the driveway since the deck staining back onto the deck, because I've hatched the plot to ask them to do more heavy lifting of the big stuff back onto the deck.

They take out the old mattress. They pull the new mattress out of the box and cut open the plastic bag it's in and it unfolds neatly on the bed platform. I've been in a panic about opening the plastic. My last mattress emerged explosively when I cut into the plastic; and flipped onto its wrong side. I'd had to call someone to upright it.


I am instructed to let this air for 72 hours, to off-gas and reach its full plumpness. I open a window and lock the cats (and myself) out of the room. It takes one of those tiny tools, a bit like a screwdriver, that must be inserted in a microscopic hole, wiggled until the blade finds the notch, then turned, all with no leverage and at a slanty angle, to pop the button on the other side. I developed a facility at this. 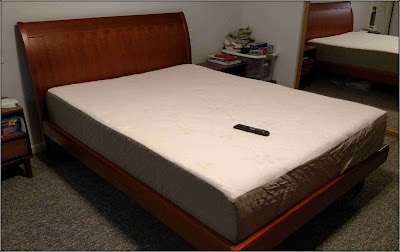 When the deck guys took the wood shed into the driveway, I thought I saw them skooching or carrying it with the wood in it. That must be a false memory, because the shed begins to buckle when the strong guys try to move it. They move it without the wood. I transfer the woodpile myself, wheeling in my little firewood carrier a load at a time, to sort it and stack it in the shed. This is a mammoth project for wimpy me and I'm rather pleased with myself for sticking with it until I put it all away, as I usually manage not to do.


So it's the sleeping bag in the living room again, rather like when my room addition was under construction. It's a step up, though. I'm on the couch, rather than on a mat on the floor. I wake up in the morning with my little cuddle buddy. He's lucky I love him! 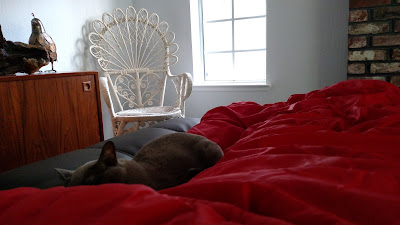 Here's Henley, the big boy, with me. It looks like he's posed against a water color background. 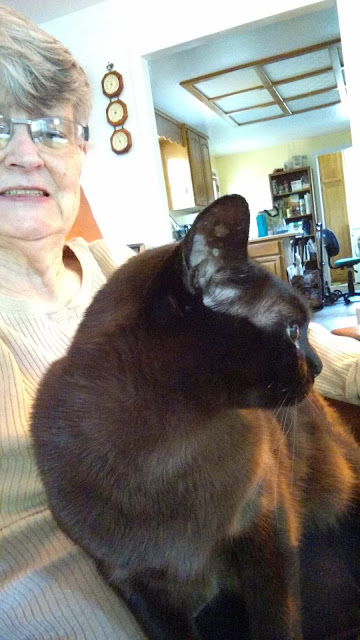 And here's Jean-Luc in stealth mode. He believes he is sneaking up on me. He's moving toward me in half inch increments, with long pauses between steps. If my laptop is on my lap, he pokes his nose under a corner of it to tip it off so he can claim my lap. I must put it on the arm of the chair to do work on it. 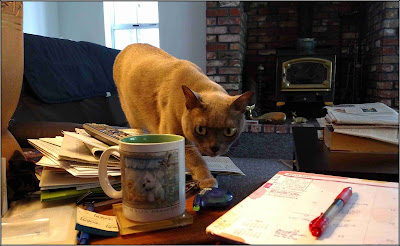 Sometime during this period, in a distraction from the story for one of those nonlinear threads, the cable guy appears one day with a box to attach to my TV. The cable company is in the process of going all digital, and we've known for awhile that my living room TV mangles sound on the digital channels. The box sits between the cable coming through the wall and the signal input into my TV. My entertainment setup refuses let it be that easy. How does my DVR get a signal? How does my surround sound system fit into this? Channels are scanned on the box. Channels are scanned on the DVR. These scans each take a long time. The box skips the whole series of channels in the HGTV range. I must have HGTV. The cable guy calls in for additional advice and the big boss shows up. He's the ultimate cable techie. Since the cable guy is also the Internet guy, I tell him that my router and my portable phones don't play well together and I insist that my old portable phone is the only one for me, for a number of reasons. Blah blah blah. And my laptop is getting a poor signal in the living room and loses its connection to the Internet every few minutes.

Cable guy emails me a link to Amazon.com for a wi-fi extender. It took me two or three tries to make it extend. Back to cable, it takes three remotes if I want to watch TV with surround sound. HGTV is back, and after a few days I'm down to one remote for plain old TV that doesn't require the good sound. 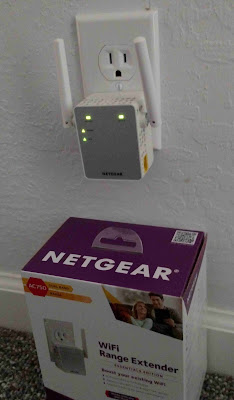 The day arrives that the mattress is ready for prime time. 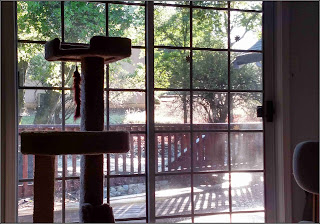 The feral kitties are delighted. They have their places to hide on the fenced in deck. 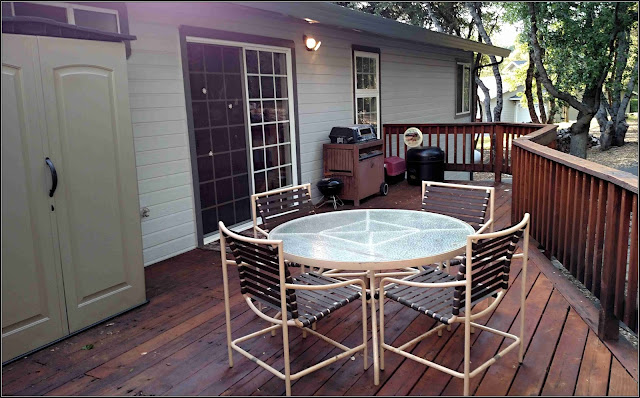 And here's the new bed, with lots of moisture-proof coverings in it. 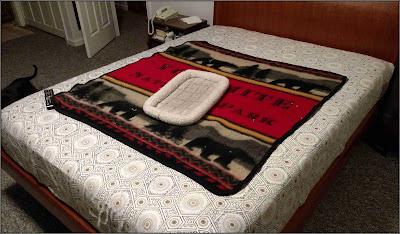