The time of day when sun flames treetops


I've been more or less cooped up in the house for a few days.  It's time to pick up the mail and take some pictures. My photo groups must be tired of cat pictures, odd angles on deck views, and other things that I conjure up around the house.

The sun really blinds me on at least one curve on the way into town. It's tree-tip level when I pull into the parking lot at the post office. Cedars have been taking a beating from the drought. That and bark beetle. Many have been taken down during fall and winter. A lot of pines are turning to rust now, too. The sun illuminates them above the buildings, enhancing how red some have become. It's more pronounced to my eyes than shows up in the photo. Nevertheless . . . 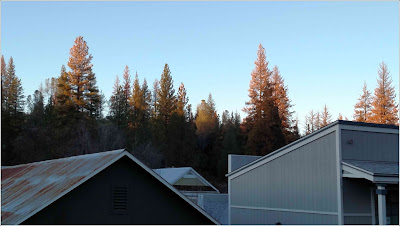 I turn right 90°, looking across the post office parking lot. That tree is very tall and looks like a pruned up bush. I never noticed its unusual shape until I see it in that sunlight. I don't see how anyone could actually prune or why they would. 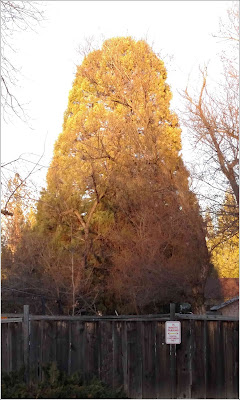 Turn a smidgen more to the right and the tall trees -- birch? -- look as golden as they did in their leafy fall. 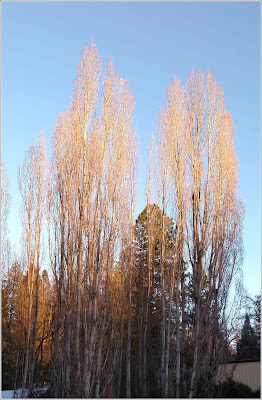 On the way home, I decide to swing by the lake for more pictures. There are three beaches and I stop by the one I visit least. The lake has risen almost to spilling over the dam in the recent storms and I haven't seen its new full self. I'm walking along the beach to the right, toward the main part of the lake, when I hear a strange sound. I look back and see a goose motoring through the water, V-shaped wake widening behind it. I fumble for my camera and before I can lift it for a photo, the goose makes a quick turn to the left and rises rapidly, flapping and splashing up out of range of the lens. It's departure leaves a T-shaped disturbance of roiling water that divides the reflections from across the inlet into darkness and gold. 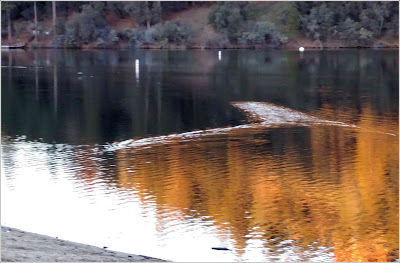 Black shadow creeps up the hill as the lowering sun strikes russet trees and a hilltop house, also reflected in the lake. 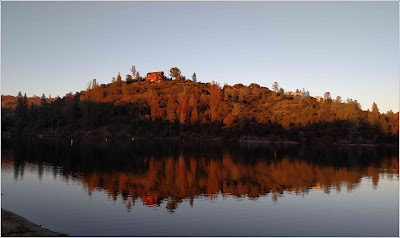 I'm heading for a golden house that has beckoned me from the parking lot, but I've fiddle-faddled around getting to a spot across from it and it has lost most of the glow. It looks smaller now. 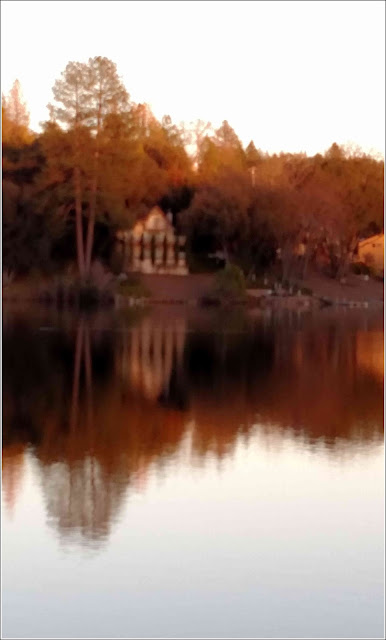 The beach and parking area are divided from a private residence and its lakefront property by a rail fence that extends into the lake. I expect that end was high and dry until a few days ago. 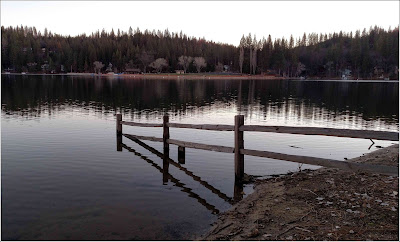 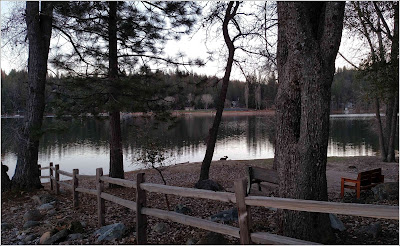 I continue to look along the lake shore to my right on the other side of the fence. 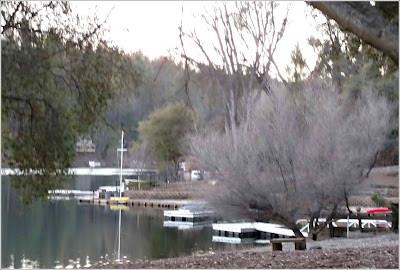 I zoom in a bit on that, along the shore, wondering if it's a live animal or a a carving. It doesn't move. It hasn't moved, so I can't tell. 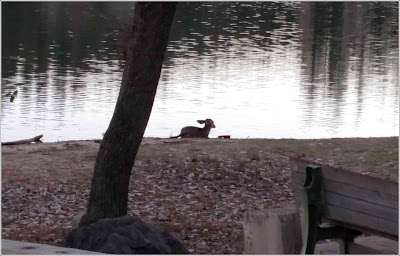 I walk to water's edge along the fence to see whether I can see more of it. I make giddyap noises and other clicks with my mouth. The animal doesn't budge. It looks like it might be partially in the water, but I can't see for sure. Do I see a slight flutter of an ear in the breeze which is getting more and more brisk? 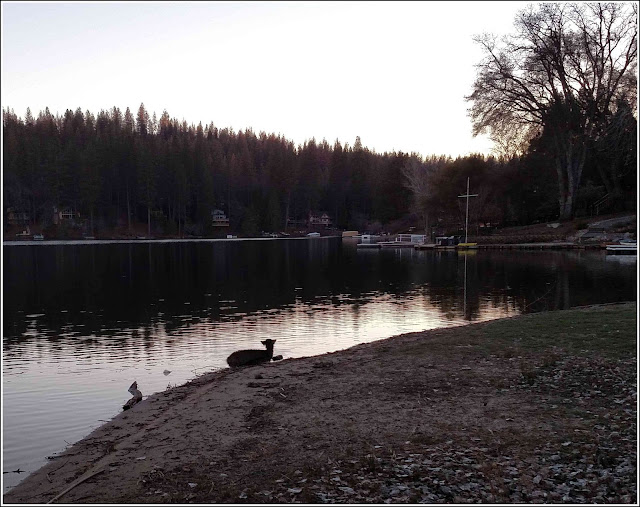 A log extends into the water just beside me. It's glistening, almost polished looking. Interesting. I can crop it into a closeup to make that show up. I look at it on the laptop screen, unzoomed, with a giggle. If I didn't know how large it really is, it would look like a cadaver foot in a scary movie. I assure you, it's not. (Maybe the fossil remains of Big Foot?) 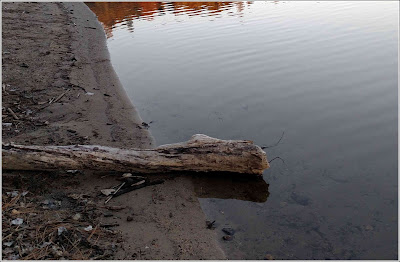 I zoom in on the apparent deer very closely. It does look like deer ears now, tips flopped over. The hair is rough and spiky, perhaps wet? I make more noises. I call to her. No movement whatsoever. 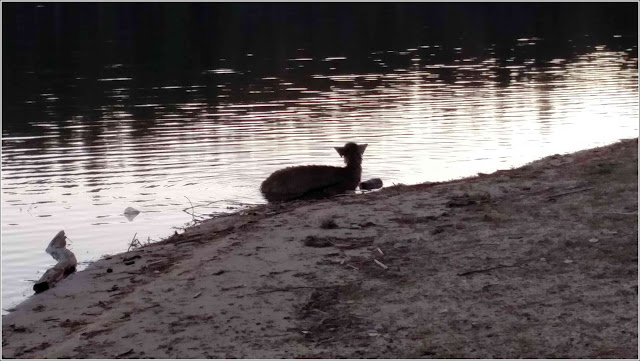 I'm too chicken to go through the fence, given my penchant for falling, with its even rougher terrain on the other side. I'm unsteady enough on the marginally smoother public side. Also, a pissed off deer can hurt you. There is no one around to summon for help should I run into a problem and it's a cell phone dead zone.

I leave her, full of concern for her. Whatever her state, I have to convince myself is a part of nature. It will be what would be had I not happened by. I leave the lake with evening fast descending. Peace to you, girl. 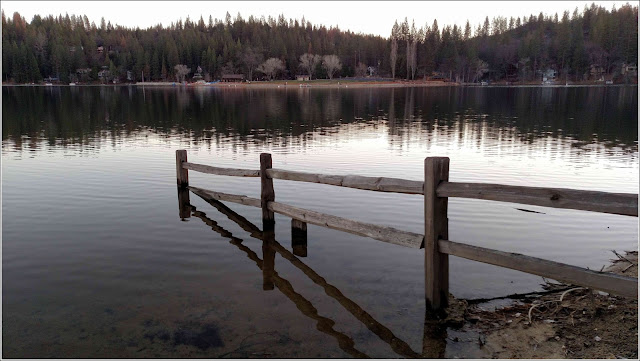