It's on my calendar for Spring and Fall. It's my quilt guild's twice-yearly camp. It's practically the only time I see guild members since the nighttime drive to the Little City Down the Hill for its regular evening meetings became scary. Cataracts were the initial problem. Those were fixed (although one of them needs a touch-up), but the prospect of anything at all happening that would close the shortcut road up the hill and force me onto the "main" road after dark strikes terror in my heart.

There was a forest fire in September in the area of the camp. The camp was evacuated, along with two other nearby facilities. News reports sounded touch and go. One residence and some outbuildings were the only structures lost in the fire. It's a long drive up to camp, and I kept wondering when I'd see signs of fire damage. Then I hit it and it had come soooo close to camp. I took a walk for pictures near the end of camp. They are posted toward the end of this blog.

This is the first time at quilt camp that I had specific quilting goals and met them. None of these projects is finished, like some of the ladies did, but I'm tickled with my progress, so I'm showing my own stuff first.

This first quilt is a kit I bought at Patchwork Europe in France a year ago. I thought it was a French pattern, but it's German, with Google-translated instructions. The translation is puzzling. I had cut all strips for this part of the quilt top at an earlier camp and pieced 13 of the 30 blocks. I finished piecing the other 17 blocks this time. Here they are on my quilt wall at home. They may still be rearranged. I have at least six or seven photos in other arrangements. Then there will be borders. The instructions for those are completely incomprehensible.

The second quilt is from Australian quilter Jenny Bowker's seminar on Shimmering Quilts. I machine quilted all the verticals, horizontals and diagonals to stabilize the quilt to try my hand at fancy machine quilting at home where I can swear aloud.

The third quilt is a Keepsake Quilting kit, Heat Wave. There are 34 blocks and I pieced them all this time. I can't even remember how I managed to cut and sort them at an earlier camp. It was like shuffling decks of colored cards. 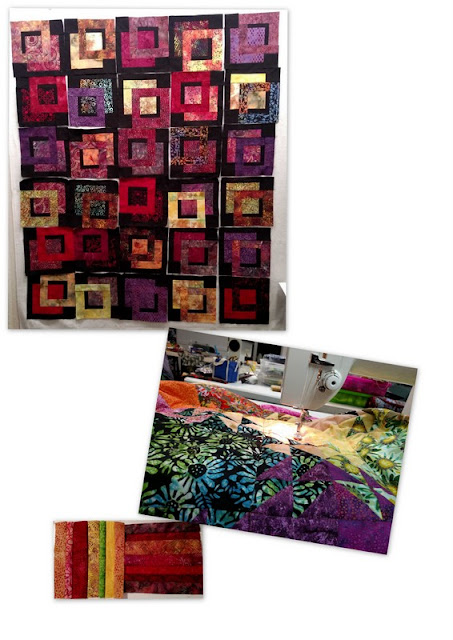 Our group this session is smaller than usual. I thought I was arriving late, but people trickle in for most of the first day. There are no Leopard Ladies. We announced two years ago that they'd achieved their goal, the Worldwide Leopard Revival, but I don't think that accounts for their absence this time. And our masseuse has a hand injury that precludes her fans' massages. Of all things, she gets to quilt this time.

This Christmas-y Log Cabin was hanging when I arrived, so there was no ta-da when I was around. 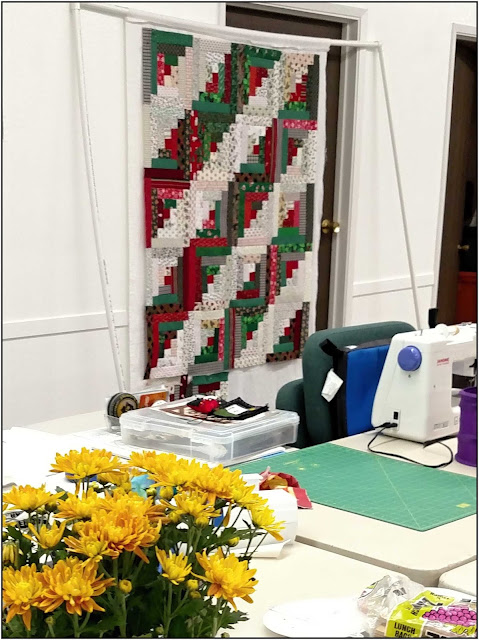 An 88th birthday cake is presented to Jeri, still making beautiful quilts. I love her subtle color choices. In fact, there are a couple of other 88-year olds and an 87 at camp. It gives me hope. And such good cake. 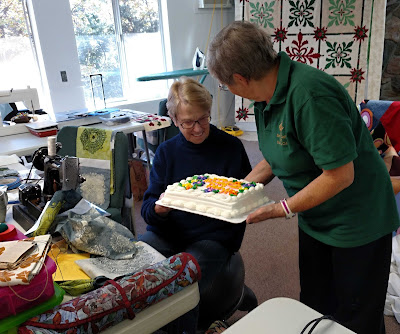 This is Ann's precision work, a combination of machine piecing and exquisite hand appliqué. She has several more blocks to go.

Jeri is working on a Christmas placemat. I love the sheep under construction. 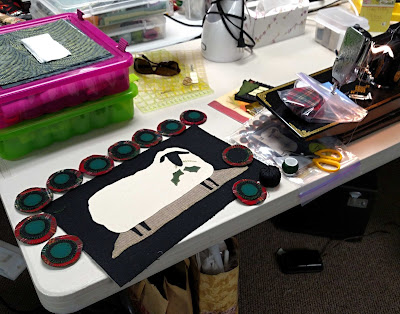 She's making a tote bag with lots of pockets, outside and in. Love the color combos. 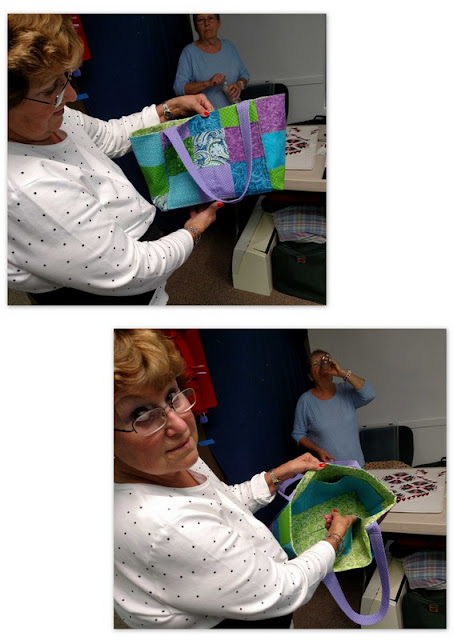 This little quilt top is lying alone on the cutting mat. I don't know who belongs to it. 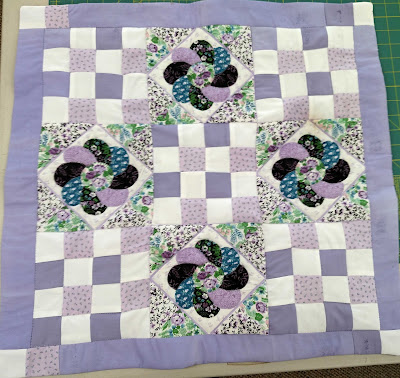 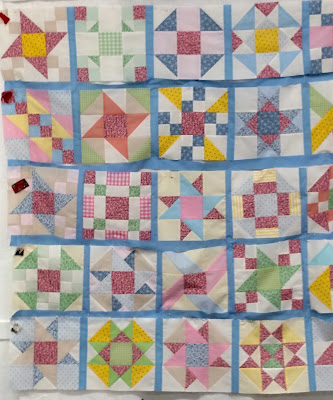 Quilts at rest for the night. 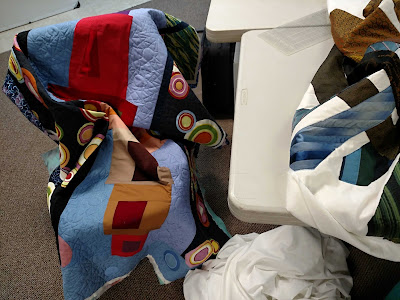 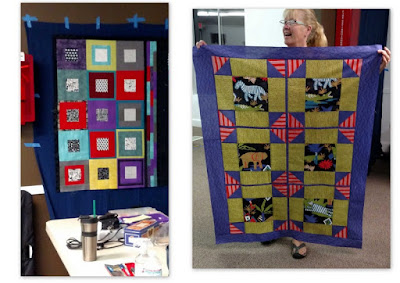 This beauty is all hand appliquéd. 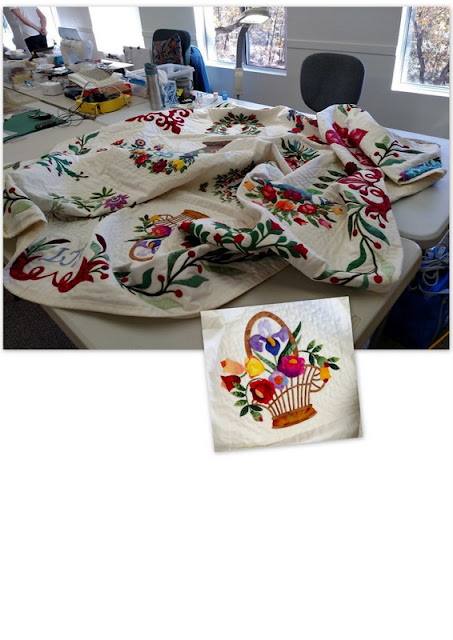 After and before. Lots of pieces involved in this quilt. 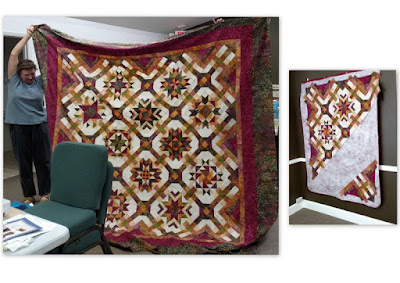 Someone noted a similarity between Julia's quilt pattern and mine. At first I didn't see it, but on closer look, this reverses the relationship between the square and the frame, but is conceptually similar. She has Flying Geese and Yo-Yos for the borders. 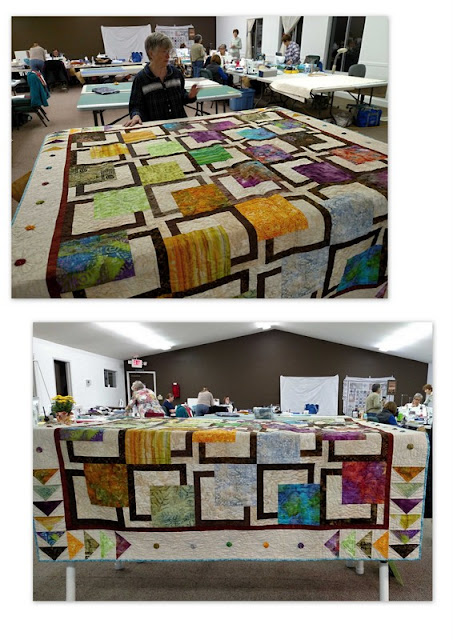 Bedtime at quilt camp: There is usually a contingent that stays up sewing late into the night. This time, most of us are off to bed before midnight. This is my walk along the deck to my room. The lights burn all night, so I have to close the curtains. But I like to have natural light coming into my room while waking up. (I love that in my bedroom at home. I finally figure out that I can open the camp's curtains in the morning when my alarm goes off and do my waking up looking at the trees. I'm happy to have my very packable slippers from Le Grand Balcon hotel in Toulouse. Someone accused me of stealing them. Would you want to be served previously used slippers in a nice hotel? I rest my case. 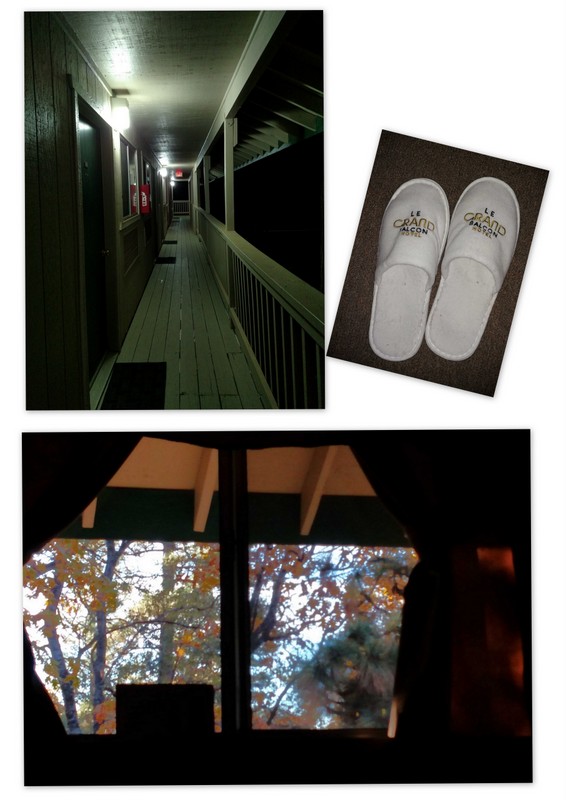 Linda is assembling these appliquéd quilt blocks, but I may have overheard her say the individual blocks were a group project. 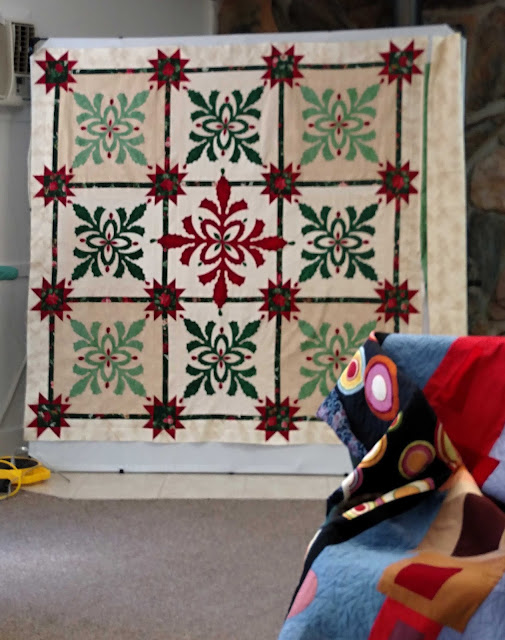 Julia also finished quilting a dinosaur quilt. You can see a sample of the quilting on the brown insert. The prehistoric, um, rhinoceros (?) will be a label on the back, as he was too big to fit in the blocks on the front. 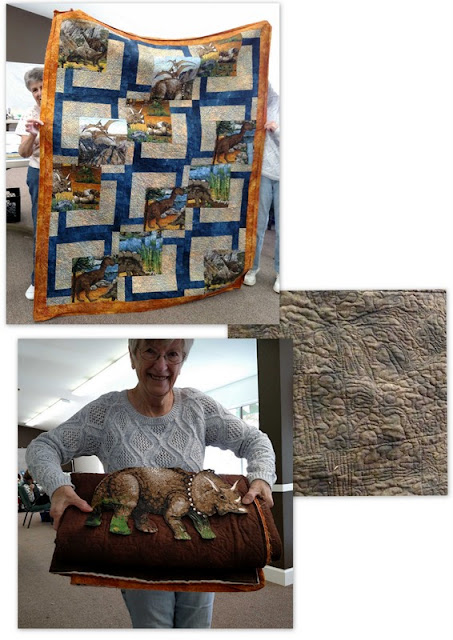 Some quilters just whip their completed quilt tops out for the ta-da and whirl around to display it quicker than I can pick up my phone camera, let alone the regular camera which is slower to put into action. Sorry, ladies. The fully opened version of the quilt is blurred. I'm sad, because I love the fabric and block (another block with a frame that looks like a shadow). 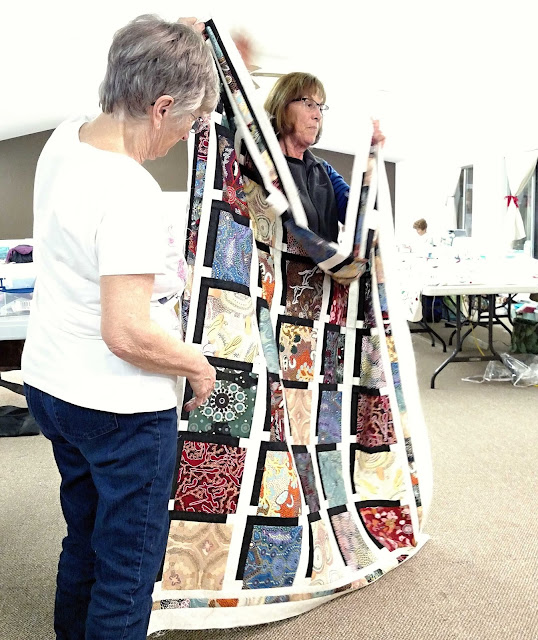 Far and near. This block, inset at the front, made completely with triangles and rectangles, creates an overall wavy look. Click picture to enlarge the far off view of that quilt on the back wall. 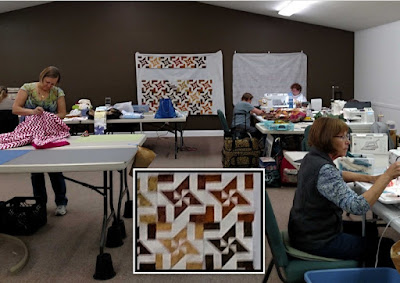 Charleen finishes the border. It took longer than she expected. The bottom view is "almost done." The border, still to go. I would never have thought of using these colors, but they look so refined and delicate that it's very charming. 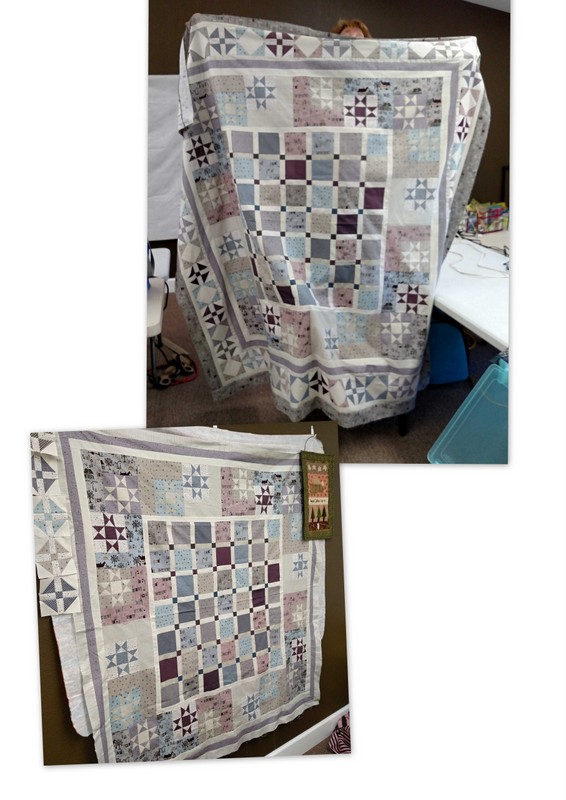 Linda is doing this appliqué herself, I believe. There's still more to go. 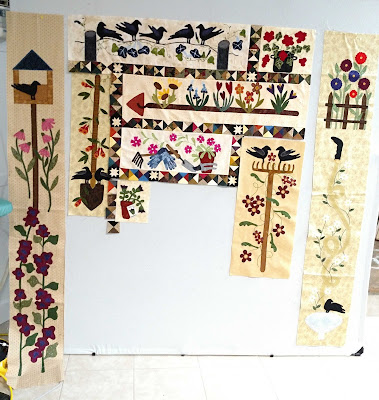 Debbi has completed a top she is entering in a Courthouse Steps competition. It's sideways her in the completed version, because that's how tall she is. I've included the partially complete version in the lower photo so you can see it right-side-up. 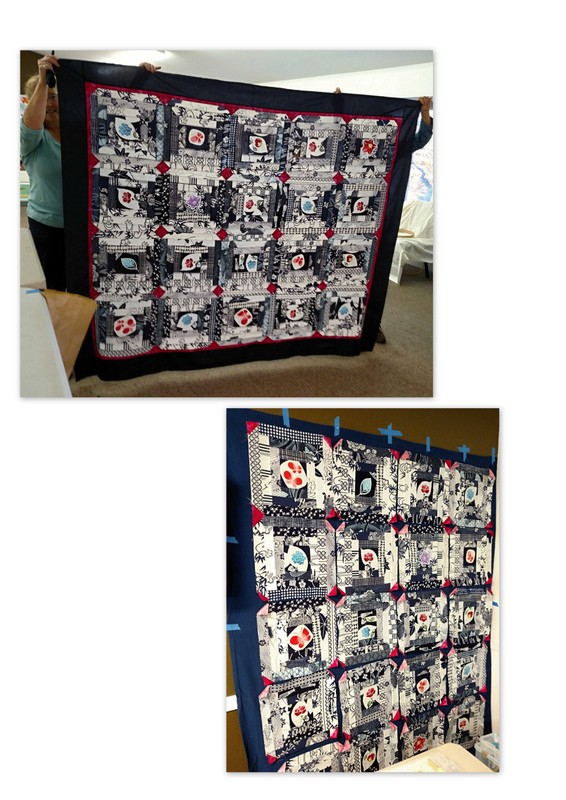 This is an intersection at camp, with the road on the left leading down to the dining room, more housing areas, and lots of facilities for group sports and other activities. The road up the hill to the right goes to the housing and workrooms we use. 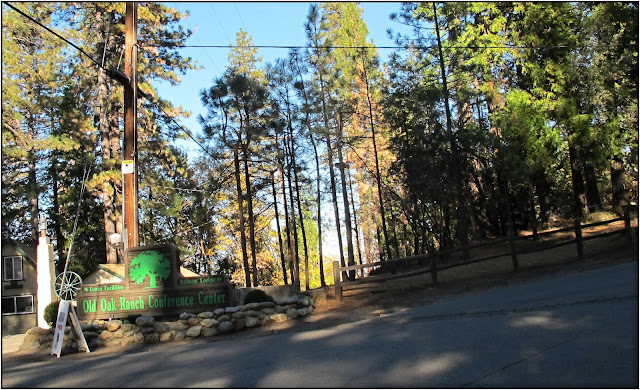 Just turning around from the previous view, this is what you see. The white slash at the bottom is the sun reflecting off water in the ditch that carries water down the hill. It is also referred to as a canal. Those low trees and bushes are singed. That close to camp, just through one stand of trees. That's how close the fire came. 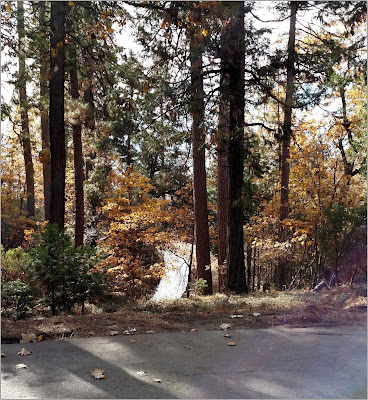 I walk along the road. The spots are glare off my lens, not smoke. You an see a longer stretch of the ditch, flowing downward. 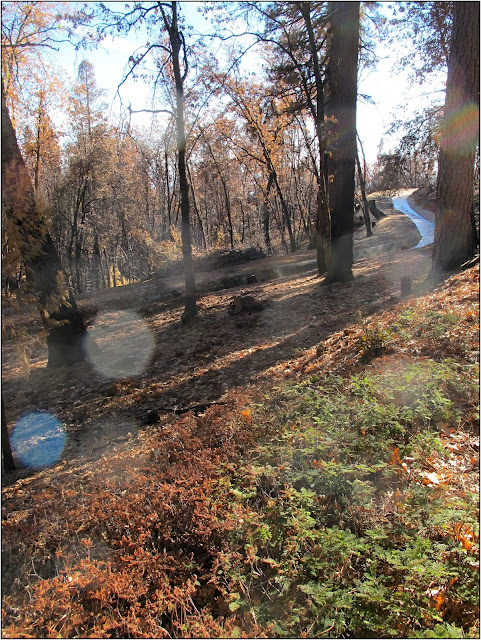 You know I don't walk very far, so you know how shortly the stark landscape comes into view. 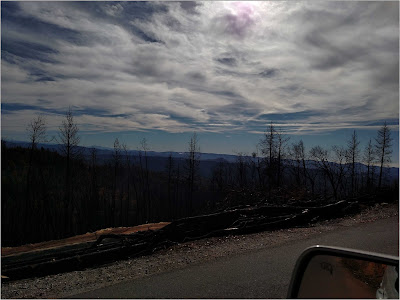 The ditch once more, and charred trunks of trees which have been felled. I don't know whether they're too far gone to salvage for lumber. Kinda looks like they might be. There are stacks of logs scattered in the area that are cut to mill length. I presume they're for salvage. 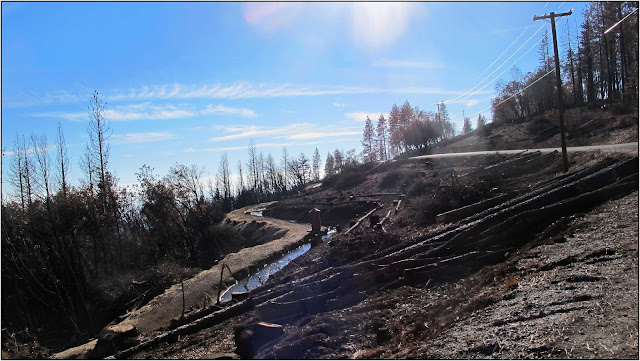