I emerge into bright sunlight after debarking from a cramped, rush hour rapid transit train from the airport. It only takes an exchanged glance with the cabby – the only cab in the queue – for him to rescue me from my heavy, awkward luggage arrangement. Settled in the cab’s back seat, I start to give him directions in French!

Was it just this morning that I was sitting in Charles de Gaulle airport, the big one for Paris, waiting for the trip home?  My airport shuttle gets me there in plenty of time, so after check-in, the ever-joyful search for non-compliant items, a short hike, a train ride, and a longer hike, I arrive at Hall M, Gate 50 in the International Departures Terminal 2E. Followed by the long wait.

A few early arrivals like me scatter themselves around the large room’s seating area. Avid smokers cram into a tiny atrium off to the side.  I listen to a pleasant blend of French voices, the occasional English and a smattering of less familiar languages, and smile.

I love France. If there’s any deep reason accounting for it, it may hark back to the trip First Husband and I took abroad in our college years, intending to bicycle. That went by the wayside in short order. But not before we rode the bicycles through the multi lanes of traffic around the Arch of Triumph. We started in England and made our way, by a variety of means, around Western Europe. Paris, and our favorite Hotel des Deux Continents (very low end in those days), became our refuge when we were stressed or short of funds. Remember the American Express in Paris? The place where you received manna from home when spirits and money sagged? Paris has always felt like a port in the storm. Home.

I’ve been back to France many times since. Other countries, as well. (Have you visited the Principality of Seborga?)  I was as excited about this trip as ever, full of joy and anticipation. It would encompass a variety of companions and places. A mishap part way through poked a hole in some of that joy, but I don’t think anything could have brought me all the way down.

I’ve been among French voices daily for almost a month. I sit in the airport with the sound of French in my ears, misty eyes, and a smile on my face. Nostalgia? Wistfulness? What if this is the last time?

The cabby has some kind of accent, but it’s not French. When I tell him I almost spoke to him in French, he laughs. “French. Like ‘merci beaucoup?’” he asks.

We arrive at Sister’s house, where I am lavished with love by happy kitties, obviously believing it’s Mommy and Daddy arriving home from their vacation.

“Very soon, kitties,” I assure them. 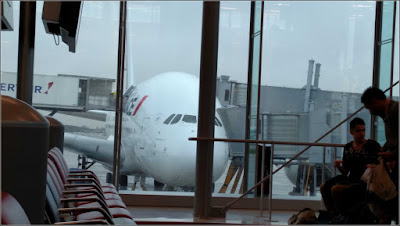 There's a flurry of activity now, after a service container is lifted to a door
on the upper deck. A steady flow of carts streams
from the container into the plane. 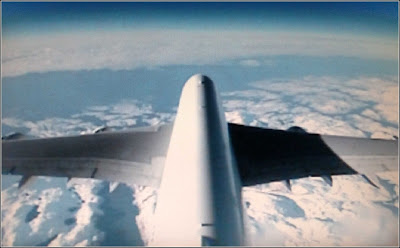 All the window shades are closed in my cabin on the upper deck. I take peeks
at the feed from the tail camera periodically to see what there is to see.
I make a special point to look out as we travel over the South tip of Greenland.
This is a better view than looking out the window. I can watch the flight without
cricking my neck. I have three very similar photos of Greenland here.
They are not identical! The view of the plane is constant. It's Greenland that's changing. 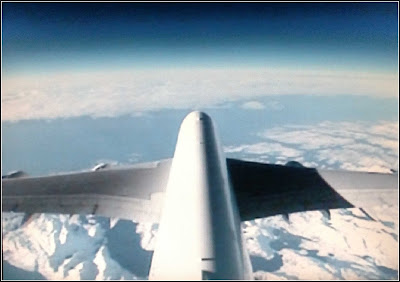 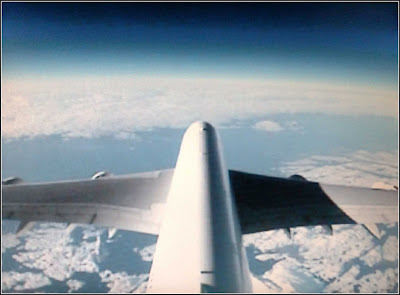 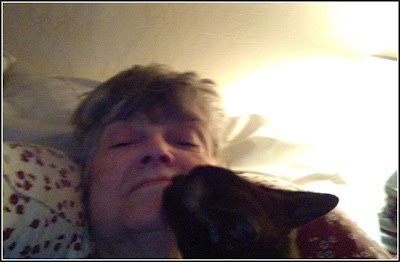 I'm staying at my Sister's house for the night on my arrival, rather than driving home to
the mountains completely jet lagged. I'm awakened in the morning by Bentley-cat,
who believes my chin needs a good licking. 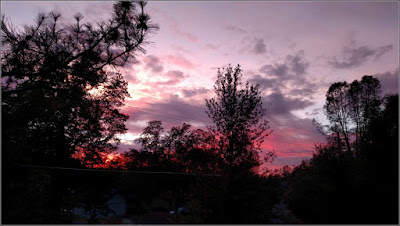 I'm home, and there's a beautiful sunset to remind me how beautiful home is, 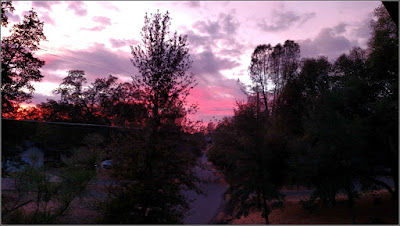 I'm blogging about my month (almost) in France now, after the fact, as I was cautioned that announcing one's absence during that absence is not a good idea.