The weekend before I left on my trip to France was busy with all the things you have to do just before a departure: making sure tickets and itineraries are in order, sorting enough pills into daily packs to last the duration, pack, stock up on cat food and litter. It was also a big weekend for community events that I wanted to poke my nose in on. Saturday was the big annual parade in Our Little Town, followed by a festival and chili cookoff. It had nearly been canceled, then rescued by a community effort. The annual quilt show in the Little City Down the Hill was on Saturday and Sunday.

I gave up on the parade. I don't have the stamina to stand for it, and last time, when I had a front row seat, some Rude Dude thought he had a right to stand directly in front of me, in the street. I wanted to kick him in the rear end, but I just steamed instead. So I made a quick visit to the festival on Saturday afternoon, and ran down to the quilt show on Sunday.

It was a quick trip and I took photos of quilts that particularly caught my eye, not even very many of them. When I first started shooting, I didn't think to take clear pictures of the labels so I could provide information about the quilt. I'd welcome any of my fellow quilters contributing missing info in the Comments below.

I don't know who made this quilt or its name, but I love the richness, and , , , 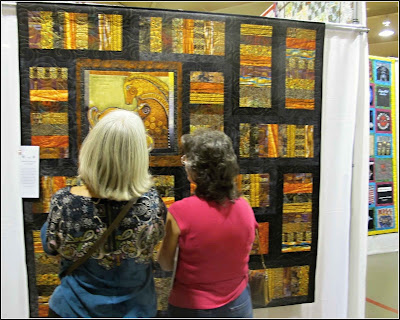 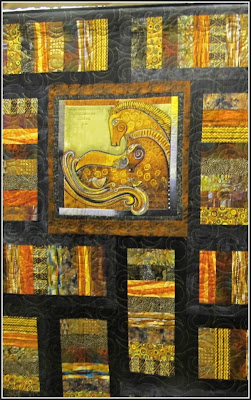 This is "Split Personality," by Marilyn Scheller, the Featured Quilter at the show. I've been looking at a book with this technique illustrated, and I'm interested that giant red flowers were used as a background fabric. I'm a red poppy fan and plan to do some work with a panel I bought. 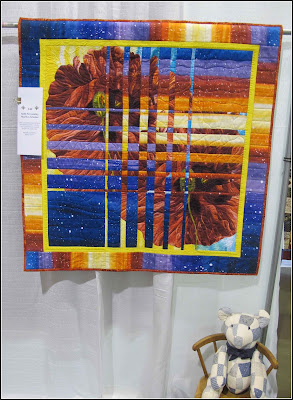 This is "Movement with Drunkards Path" by Barbara Walker. Love the colors, batiks. I used to want to do a Drunkards Path and this execution takes it out of the traditional mode. 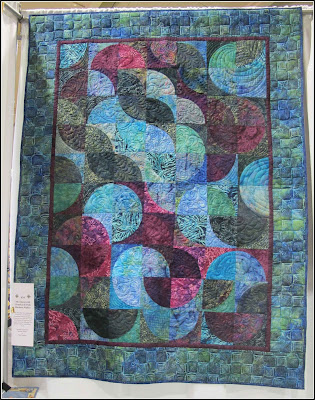 This is "My Colorful Dark Side" by Ginger Dugan. It's in the appliqué category. I like its off-center center in a traditional pattern that's not usually this bright; it's slipping a symmetrical pattern "down down the page," off-centering it. 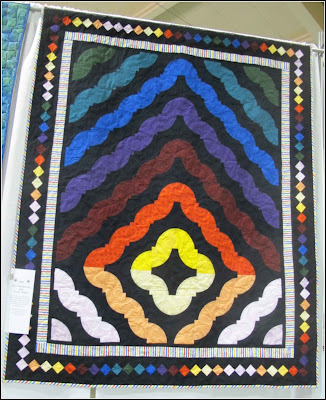 Dragonflies in delicate colors and shapes ... light airy quilt.  "Dance of the Dragonflies," by Kim Garro. Zoom in on this. It's lightness is lovely. 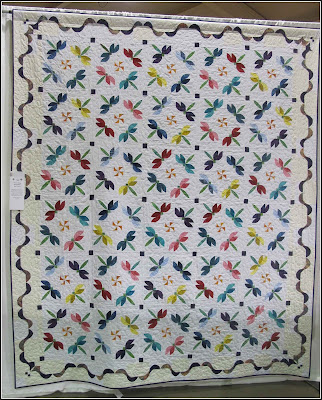 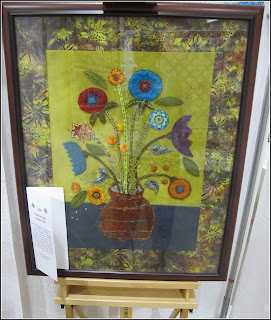 I think it's "Got Blocks" by Barbara Barrieau.  An awesome way to showcase blocks and fabrics. I wonder, does she had some bigger works using these fabrics? 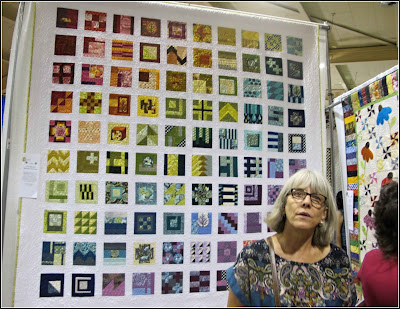 "Coneflowers," also by Susan List. I've had a recent fascination with coneflowers. I'm almost thinking it came after I saw this quilt. 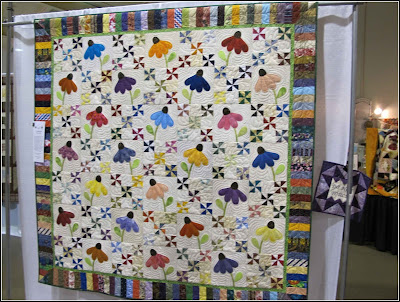 Two quilts in the same pattern made at a spring quilt camp. On the left is "Splashed," by Cheryl Ferreira, and "Ocean Waves" by Sharon Heimlich on the right, It's a neat pattern looks like a damned lot of work! I like the similar but different colors. 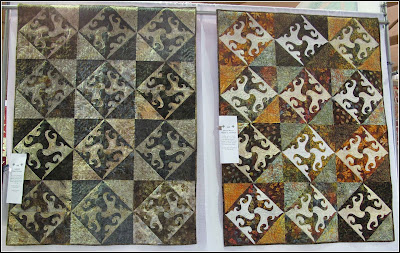 I have always wanted to make a "Storm at Sea, with my own unique angle to it. Betsy Main has done this with "Rainbow at Sea." Very cool, Betsy. 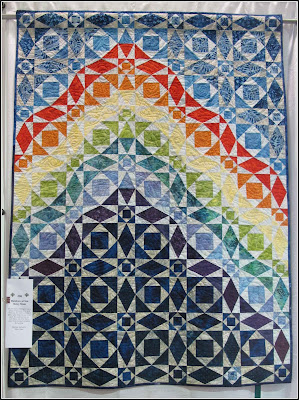 "Yin Yang" by Louise Nelson. I believe this handsome guy has been done with thread painting. See the photo after this to see his surroundings. Enlarge the photo to see the subtle blue shade shifts in the Yin Yangs. 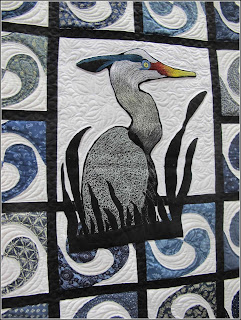 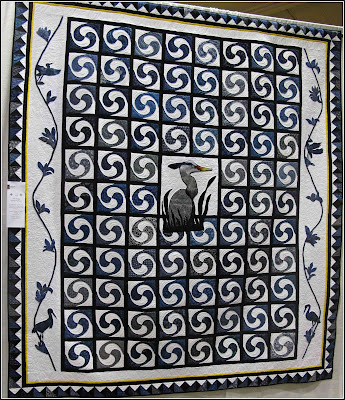 "Maryjane," by Barbara Barrieau, is made from scraps of Daiwabo fabric from Japan. The pattern is by Maria Taomako. Paper pieced and machine appliquéd. 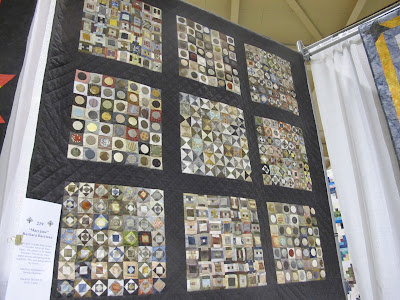 CATS!  Of course I'd give  you a photo of cats! On a quilt! "Cat's Meow," by Patricia Fleischman. My photo of the label isn't clear enough to read her story. 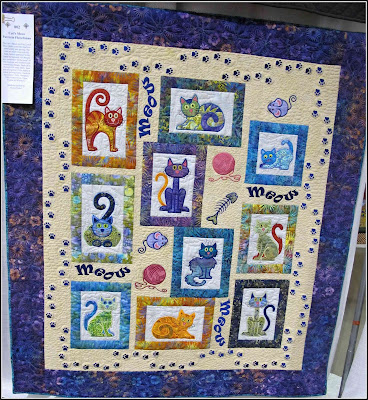 "Long Fall Sally," Sara Henry. A collage quilt, with many Kaffe Fassett fabrics. "The hard part is knowing when to call it finished," said Sara. It's adorable. (Smiley.) 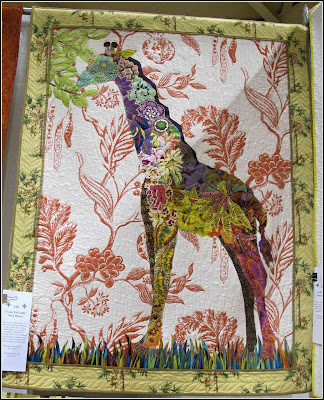 I like yellow, black and white together. I once made a quilt in those colors. This is "A Kiss of Klimt," by Barbara Hardwick. I've had a previous encounter with Klimt  here. 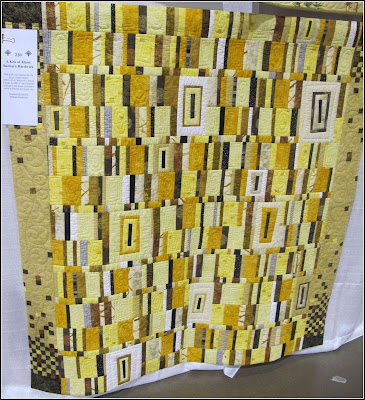 This quilt was too big to capture on my camera in the space available. Here, I'm showing the upper left corner and the lower right out of six photos. Best done this way to show details of the animal embroidery. It's "Animals in the Wild," by Ken and Liana Mahn. Embroidery designs by Anita Goodesign, machine pieced by Liana, machine embroidered by Ken, and machine quilted by Susan List. 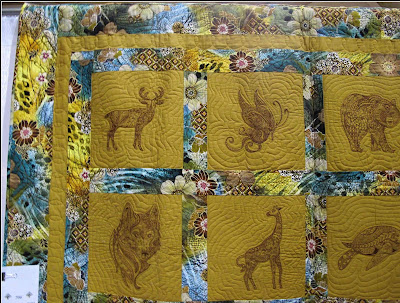 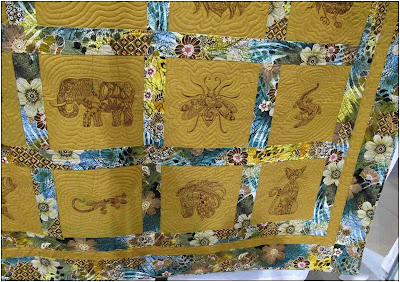 "Out of the Box," by Barbara Hardwick. It hangs in her quilting studio as a reminder to be creative and think outside the box. That's exactly what I thought when I first saw it, before reading her description. It's a splendid piece. 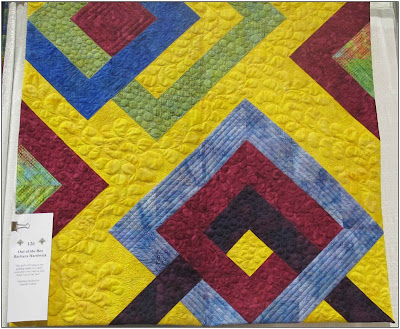 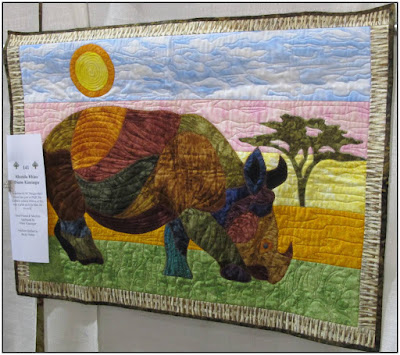 I call this "Colorful Corner." I don't have details on the quilts -- shot early on and quickly, Eclectic little works, smiling at each other. 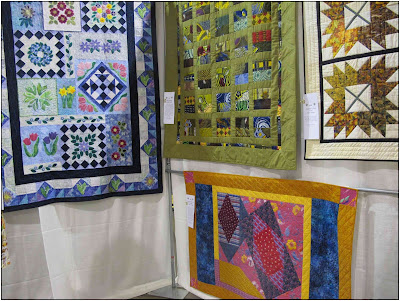 Charleen Beam's "Yolanda."  Charleen fell in love with this guy, used her Kaffe Fassett fabrics and did her first machine quilting on anything larger than a table runner. 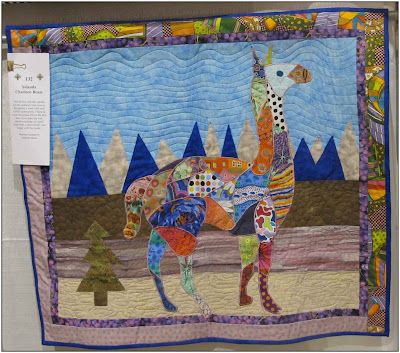 I had to rush home for more of getting ready for travel. I wanted to pick up a sandwich at the show snack bar but it was too late for food. I got a soda of some sort and sat down to drink it.

These beautiful little bouquets waited on the tables to be cleared away at the end of the show. Sunlight shone in from high windows in the concrete walls of the fairgrounds building, lighting up the blooms. I couldn't resist taking their pictures. 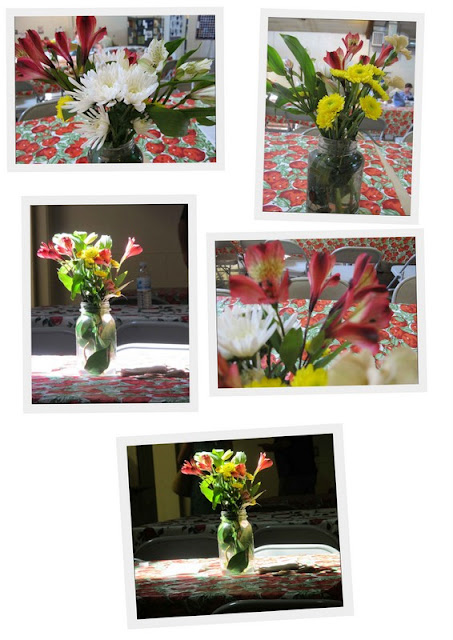