(Not) On the Dance Floor Again

That's getting to be My Song.

There really wasn't a weekend of rest and relaxation between the Wedding Event and the Quilt Stroll. So how could I almost forget that Our Little Town got its annual visit from Travelin' Band, a Creedence Clearwater Revival tribute band with lead vocalist Michael Furlong? It's time to want again to dance - but still can't.  I won't recite the reasons, again. Foot-stomping, head-bobbing, clapping and finger-snapping are not precluded.

I arrive early-ish at the Groveland Hotel's Yosemite Courtyard Cabaret.  I seat myself, center, second row. The instruments are ready and waiting. Other patrons trickle in, filling in the seats on the main patio floor and at the garden  tables above and behind it. A couple I know well sits behind me and we chat during quiet moments. There's another couple next to them and they watch me as I chat with my friends. They look familiar somehow, maybe from sometime in the past? I puzzle.

No one takes the seat directly in front of me. I won't have to hold my camera overhead for photos. 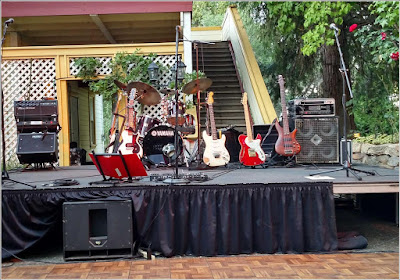 Dusk. It has been a warm day and I bring only a bright floral scarf/shawl that I can pull down over my shoulders and twist around my arms if it gets chilly. 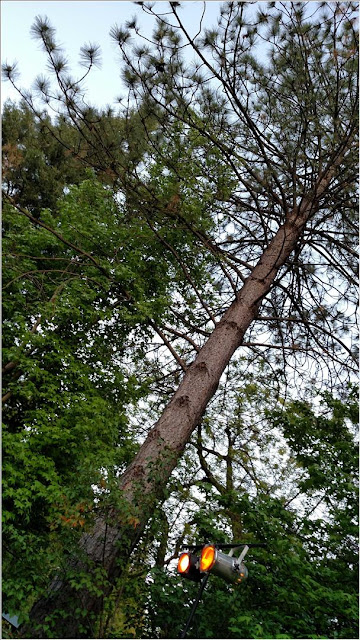 The musicians wander onto the stage. Whether it's by design or omission, there is no M/C to introduce them. No programs and no introductions. They just play.

I don't write down the song titles as they play. But I Google a CCR Top Ten list. They play all of them and more, and some of them more than once. 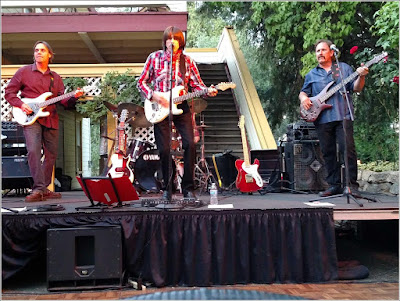 Dancing always starts a little slowly. A bolder woman finally makes a move toward the dance floor and several more quickly join her. The lady in the reddish top and white pants dances every single dance. 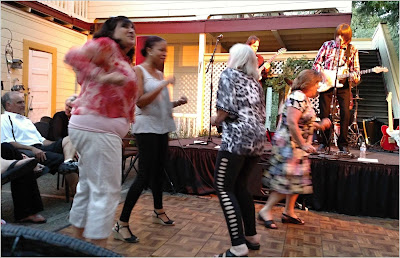 Have You Ever Seen the Rain?
Proud Mary
Fortunate Son

As the sky darkens, the dance pace picks up and the dance floor gets crowded. Some men join in but most of them not with the intensity of the women. 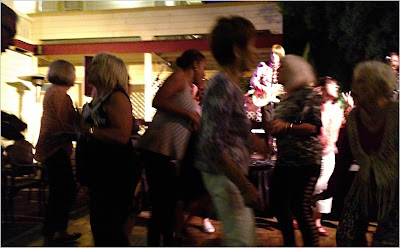 Born on the Bayou

Down on the Corner
Up Around the Bend


The puzzling-people-from-the-past, seeing me take so many photos, ask me to take theirs on their camera phone. I can't keep their phone "awake" long enough to snap their picture, so I take one on my own, offering to email it to them.

I finally ask them whether we've known each other in the past. We exchange queries and finally figure out that they're Sister's part-time Neighbors-Next-Door. We'd met at a big party at Sister's house a year or two ago. ("Past" is relative.) 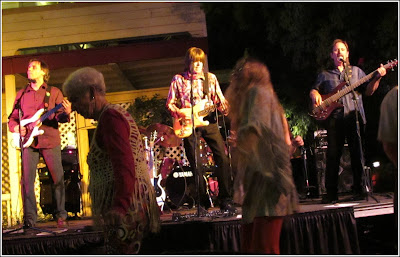 Green River
Lookin' Out My Back Door
Bad Moon Rising

The men have finally been lured out of their chairs in greater numbers and participate with enthusiasm.  (I don't think they have as much endurance as the women do.) 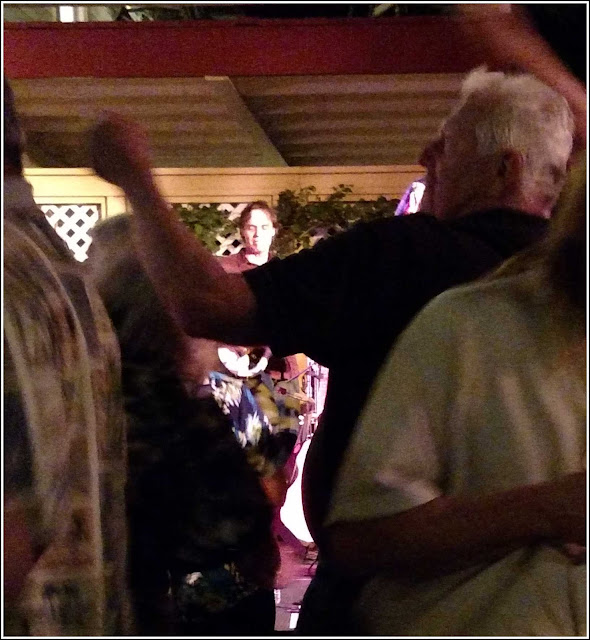 I take a video of the dancing. I'm a total novice at videoing but it comes out pretty well. When I review it, I see it has several seconds of the Neighbors-Next-Door dancing but when I go to email it to them, the file is too large to send. I try to post it here, but it's too large for blogger software too. 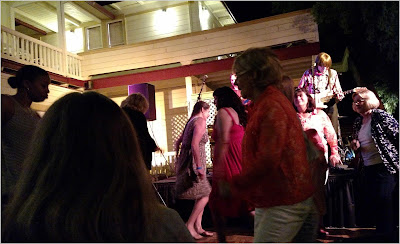 Lodi (Stuck In)
I Put a Spell on You
Cotton Fields 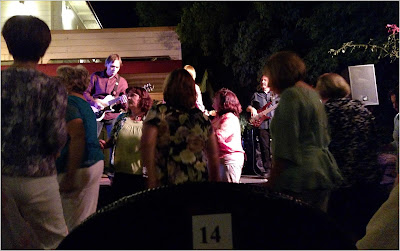 Run Through the Jungle
Midnight Special 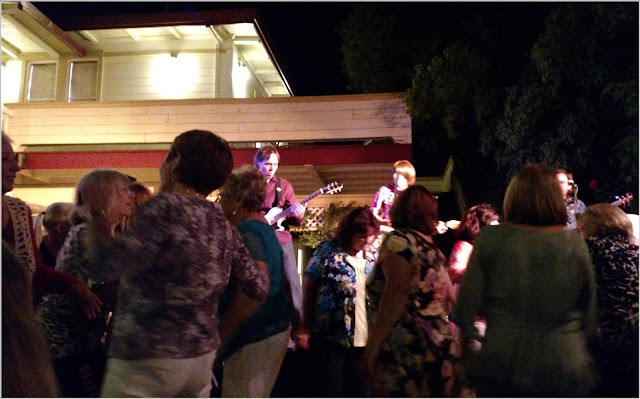 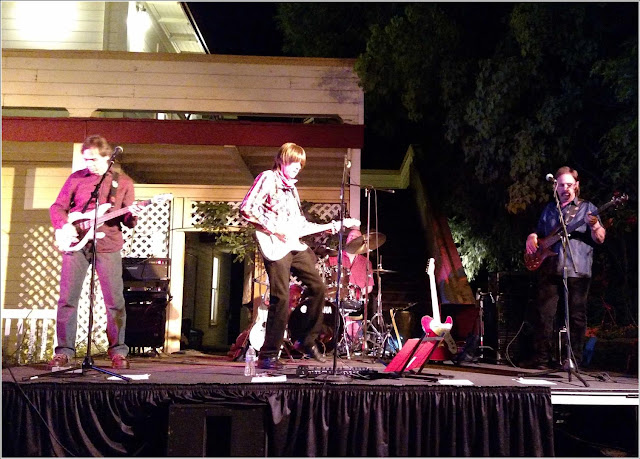 The songs wash through me, songs so familiar to my generation and those bracketing it. Just one more encore. Another.  I sing them at the top of my lungs, even though I don't really know the words, just maybe the end of a refrain. It's visceral. The heavy beat aligns every cell in my body, making them pulse in harmony. It's euphoric. I'm smiling, again and again. Smiling as the last notes fade away and applause replaces them. Smiling as people finally realize there are no more encores and begin drifting out to their cars or up to their hotel rooms. Shivering -- it has cooled down --  but still smiling as I head for my car. Smiling as I park at the post office to go in to check my mail. Smiling at the cats when I get home. 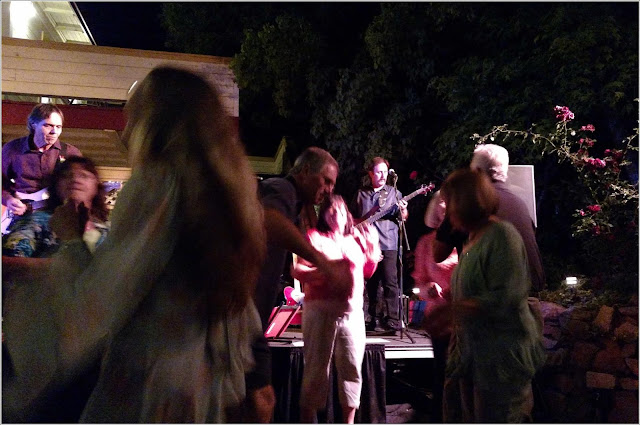 Dancing in my living room where if I fall the carpet is soft or a chair will provide a landing spot.

The music makes me smile. Coming up later this summer, another favorite, an Eagles tribute band. I have my ticket.