Beep. Beep. Beep. Beep. Beep. A fast, high-pitched cadence. I fade deeper into the dream. My dreams have been vivid, and odd, yet still I don't remember them once I'm awake. It takes a few moments to realize it's the alarm on my cell phone. It's the only timepiece I have in my bedroom. I must have a doctor's appointment today. Whatever the dream
was . . .

It's the story of life, isn't it? Patterns that repeat. Breakfast. Because I always wake up hungry. Lunch. Maybe, if I think of it. Snacks. It's easy to snack the afternoon away. Then dinner. It's nine p.m. as I start the text for this blog and I haven't had dinner yet. That means I won't cook anything more complicated than a Lean Cuisine in the microwave. I think I have some green salad and a little fruit left over from the senior lunch on Thursday and I can toss the remnants of the cottage cheese into the mix. Henley has settled on my lap now, so supper will wait until he starts his annoying leaps across me that expresses his displeasure with my current occupation.

Jean-Luc has his morning routine. He sleeps on top of me all night. Once I get out of bed he hides under the sleeping bag (or in this case, his kitty blanket) until I roll it up and toss it in the closet. 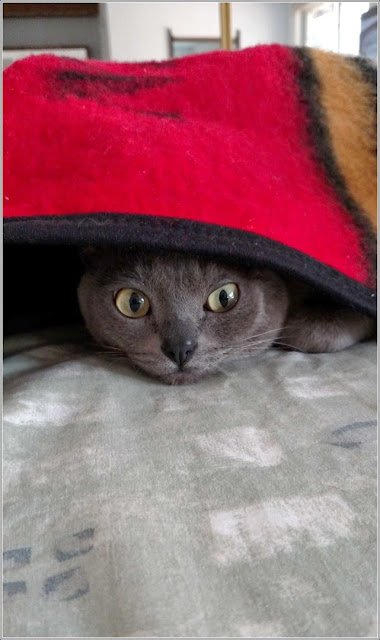 For most of the years I've lived up in the foothills, I took the main highways to the Little City Down the Hill. It's longer but it can be faster. There are many proponents of a shorter, more sinuous back road. But I don't like it. It has no passing all the way to the Little City and I get all annoyed when I'm behind someone who drives too slow (like 15 mph below the speed limit).

Then a friend drives me into town on a ridiculously long and winding route. I can't remember what prompted me to take it myself one day and now I love the narrow, bumpy, winding road through farm, ranches, orchards and wild country. Less traffic, hardly any, and it ends up closer to most of my usual destinations. 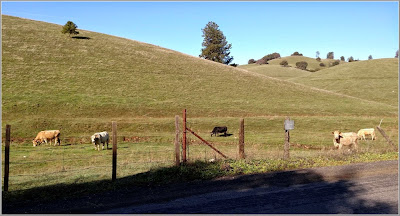 I feel like I've already used this man's photo, in a blog or maybe on Facebook. He was in the waiting room at the doctor's office and I ask him if I can take his picture in his wonderful hat. In addition to being rather unusual as an around-town hat, there is a wonderful incongruity with the wall art he's sitting in front of. He tells me he has a whole repertoire of hats from working in the theatre. I wonder if I've seen him in a local production at some time. Sir, if you see yourself here, would you mind sharing your name with me in the Comments below?

I'm making this a day on the town. I have a chocolate croissant and a triple latté as a snack at Starbucks after the doctor because I will have popcorn at the movies for lunch. I'm going to try for a double header. Does anyone remember when we always had a double-feature at the movies for our 25¢?  Instead, I get to pay the senior daytime $7.50.  Twice.  It's an action-filled afternoon: Kingsman, and American Sniper. 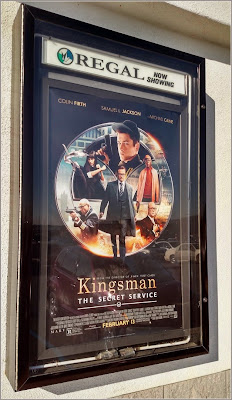 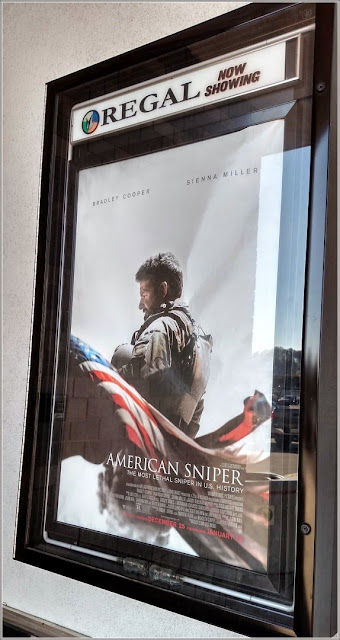 I take a picture of the poster for The Imitation Man so I'll remember the title for a future movie opportunity. 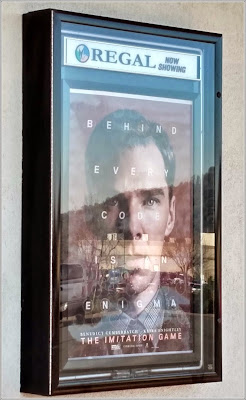 No matter that deer roam through our area every day, we never tire of looking out a window at them, or taking pictures. This is only about half of a morning gathering along the road. Many wander away when I stop the car to take pictures, 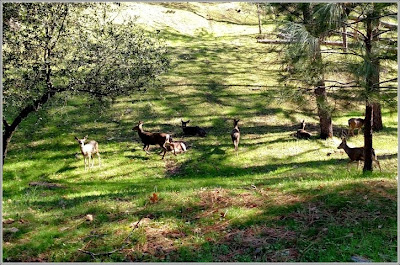 I make an impulse online purchase of this tee-shirt. At that moment I thought it an apt description of me.

I find a yellow iris in my planter box. Was it there last year? I don't remember it. Perhaps the garden crew put it in. I have purple iris with a long history, but it's not blooming yet. 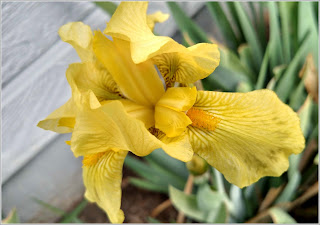 I actually cooked here: soup. I bought some spelt, because I read somewhere that that is another name for the French grain épeautre, which we had enjoyed last summer in Provence in a nice soup. There's a nice discussion, in French, of épeautre in French Wikipedia, found with google.fr. {Smile} My soup is good. 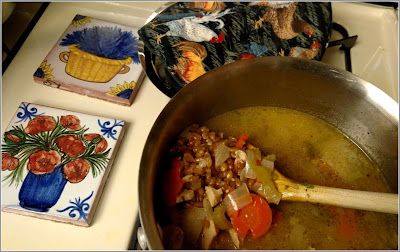 The usual beautiful Spring trips to the Little City Down the Hill (or returning home in this case). 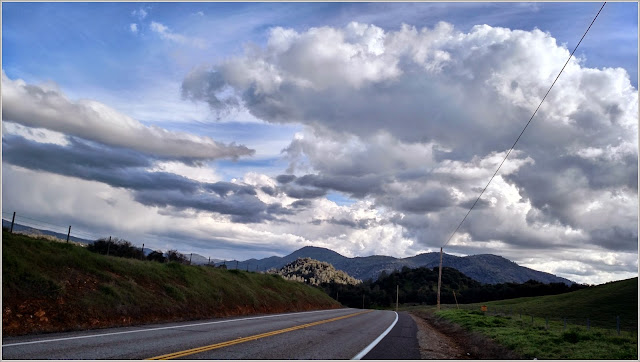 Each week our knitters and crocheters of NeedleCrafts produce pretty new items. They gift them to their expanding numbers of family members and offspring through the generations, or sell them at Our Little Town's many craft fairs and faires. 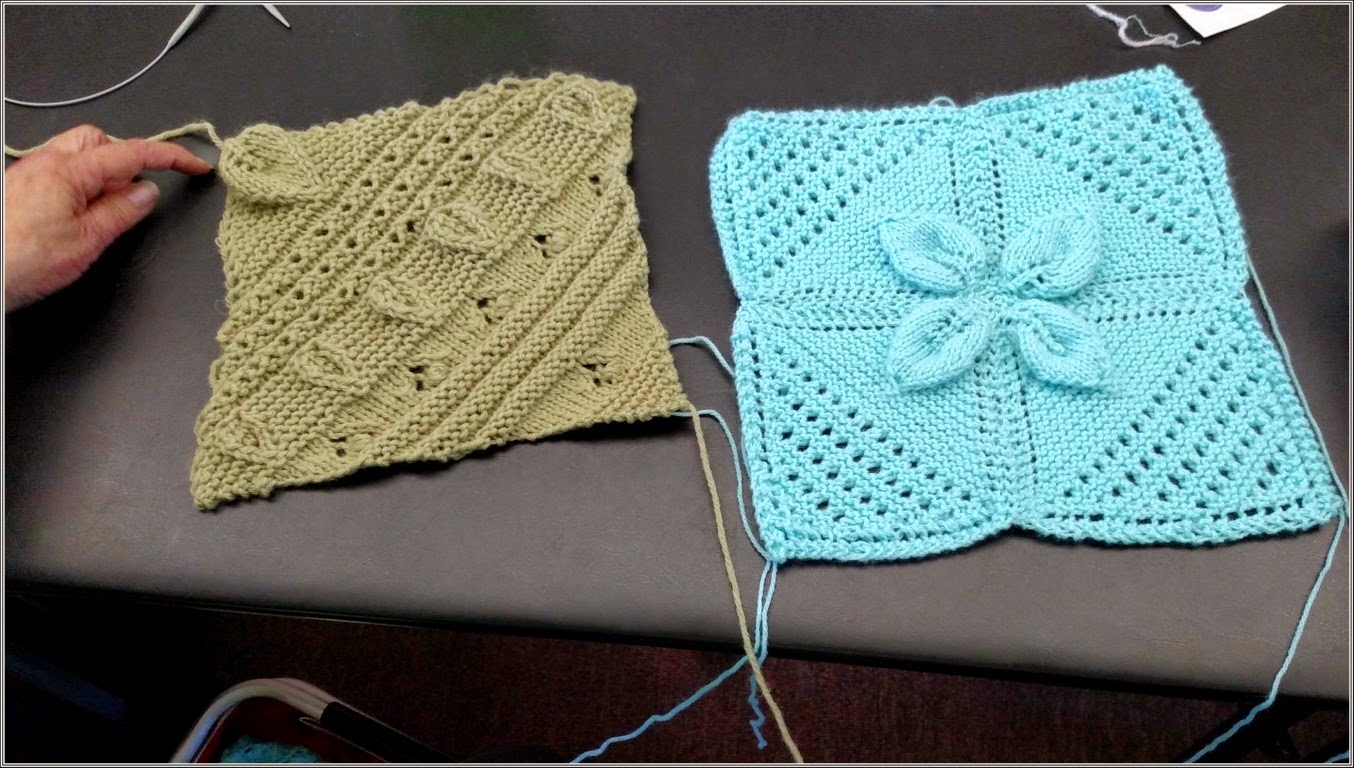 Teddy  Bear models a little sweater, cap and scarf which can be used by other Teddy Bears or by little humans. 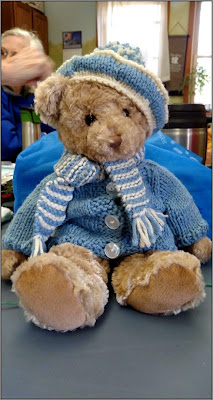 Day after day, there is the regular rhythm, punctuated with quilt camps and airplane trips. The next high note is: