Several days of dense fog in the mornings have blanketed the Central Valley with visibilities as low as a quarter of a mile in the area I will travel through. It is forecast again for the day I'll be flying out of San Francisco, so I head out in the afternoon on the day before the flight and make it across the Valley to Sister and Brother-in-Law's house under high clouds.

I would have arrived there before dark except that I somehow miss the north-bound freeway and continue west into the hills and toward setting sun, until I figure out that nothing looks right for the route to Sister's. I'm eventually able to reverse my direction. I swear the signage on the westbound freeway has been messed up somehow.

The flight is a make-up trip. Last summer, I planned to fly to San Diego for my friend Ann's 80th birthday party. It was to be a big celebration, with over 100 people invited. At the same time, I was also preparing for another lavender tour in Provence shortly afterwards. I wanted to think the San Diego trip was doable.

As the plan came together, I would return to San Francisco from San Diego, and drive home to the mountains in one day, repack for Provence the second day, head back to the the Bay Area the next, and catch the plane for Paris and on to Marseilles early the next morning. The closer the time got to leave for San Diego, the more I panicked over the logistics of it all.

I cancel my reservation to the birthday party. Funds from the cancelled flight can be used for a future flight. I remember the deadline for use as January 15. As January 15 approaches, I book for the 13th and head for Sister's on the 12th to be ready for the flight the next morning.

After my brain freeze and course correction, I arrive at my turnoff to Sister's place with the sun down below the horizon. I'm never quite sure which lane I'm supposed to be in for my exit, as several of them peel off in the space of about a mile. The bus doesn't help me read the lane signs!

Sister is taking me to BART the next morning about 45 minutes earlier than I thought, so I scurry to get dressed, repack and eat. There is a huge crowd of commuters up on the platform for the train as I drag my little luggage train up the escalator. They jam all the train cars before I get anywhere near the doors. I back off. I bet on less of a crowd for the next train (6 minutes) and I win the bet.

I have a little story about my lovely suitcase. It's been taped and retaped for several years. I bought a new one years ago, but I decided to keep going with this one as long as it holds together. For one thing, does this suitcase look like it contains anything of value? (It doesn't, actually, but that is beside the point.)

But I discover a new reason to stick with it for a few more years. When we land, I wait in my seat until most passengers have debarked so I won't kill anyone extracting my carry-on bag from the overhead. Meanwhile, I am watching a baggage handler transferring suitcases off the conveyor belt from the hold to the baggage cart. He tosses them, not abusively but definitely a toss, so they land on their topsides in a neat row. Then he double-stacks them. (Yeah, don't put your breakables in that little front compartment of your suitcase.) He skips a beat when he sees my suitcase, picks it up on either side with two hands, and softly drops it on the baggage cart, like a fragile little flower. Nice!

My steed, a rental car. I ascertain which side the gas filler is on and where something to open it is located before I even start the engine. That from painful experience.

Ann lives in the foothills east of San Diego. When I originally lived in the area, a trip to her place from the airport probably probably took an hour. It's much reduced now, what with freeways all the way up. I start by using the GPS, but don't want to go by the route it wants to send me. It recalculates at every freeway off-ramp for several miles, beeping a three note tune when it tells me to go right, a different three note tune for turning left, and three same notes for straight ahead. I giggle. Audio guidance for blind drivers?

I pull up in front of Ann's house around 3:15. She has two gates to go through, to keep her two dogs from escaping when people come in. The dogs are barking at me fiercely. They're friendly with me in her presence, but dogs tend to bite me when their owners aren't there to remind them not to, so I don't venture far from the car. Ann's car is in her garage, but no sign of her in response to the barking. I phone. She answers. She'll be right out.

She comes out in a bathrobe and jammies and gestures for me to stay in the car. "I have some terrible news."

Oh, gosh. Has someone died?  I wonder.

She pulls a long face. "You can't come in the house. I'm very sick and very contagious."

She's been fine in the days before; she even had plans for this morning before I arrived. But she awoke coughing miserably and feeling awful. I'm familiar with that cough. I had that one when I flew home from France last time, medicated with a highly effective French anti-cough pill. I am not eager to revisit the cough.

Ann offers several names of old friends she can call, but I'm not really comfortable with the thought of staying with any of them. She retreats into house and bed, and I delve into my sluggish brain to try to pull up other options. Brain freeze. There's always a motel as a fallback, but I have this vision that I'd be perfectly happy holed up in the room writing and watching television. I explain to myself that I didn't fly to San Diego to lock myself up in a motel room.

My step-daughter has asked me to come stay with her in the past, but right now her house is jammed, it turns out, but we arrange to take a deli sandwich to the beach for lunch on Saturday. I call a neighbor in my old neighborhood. Ellen is thrilled to hear from me. I always drop by when I'm down south, but it has been quite a while.

When I get there, she greets me at the door in her jammies, her bandaged forearm held in an upright position. She has just returned from carpal tunnel surgery. She is well-medicated and quite chipper and hostessly. Our kids (her four, my two) of overlapping ages, played together in the neighborhood as children. Her son lives with her, as does a granddaughter.

I stay with Ellen for two nights and she still offers more when I propose to go to a motel, but that morning Ann calls, saying that she's better, to come on up. Meanwhile, I've set up a couple "dates." I meet Second Husband's Cousin for lunch on Friday. I've stayed in touch with him and his wife after SH died. Cousin has recently lost his wife, and want to see how he is doing. It's rough going for him and he's not inclined to talk about it. I've been touched by death so often in recent years that maybe it's too easy for me to talk about, but not for him.. 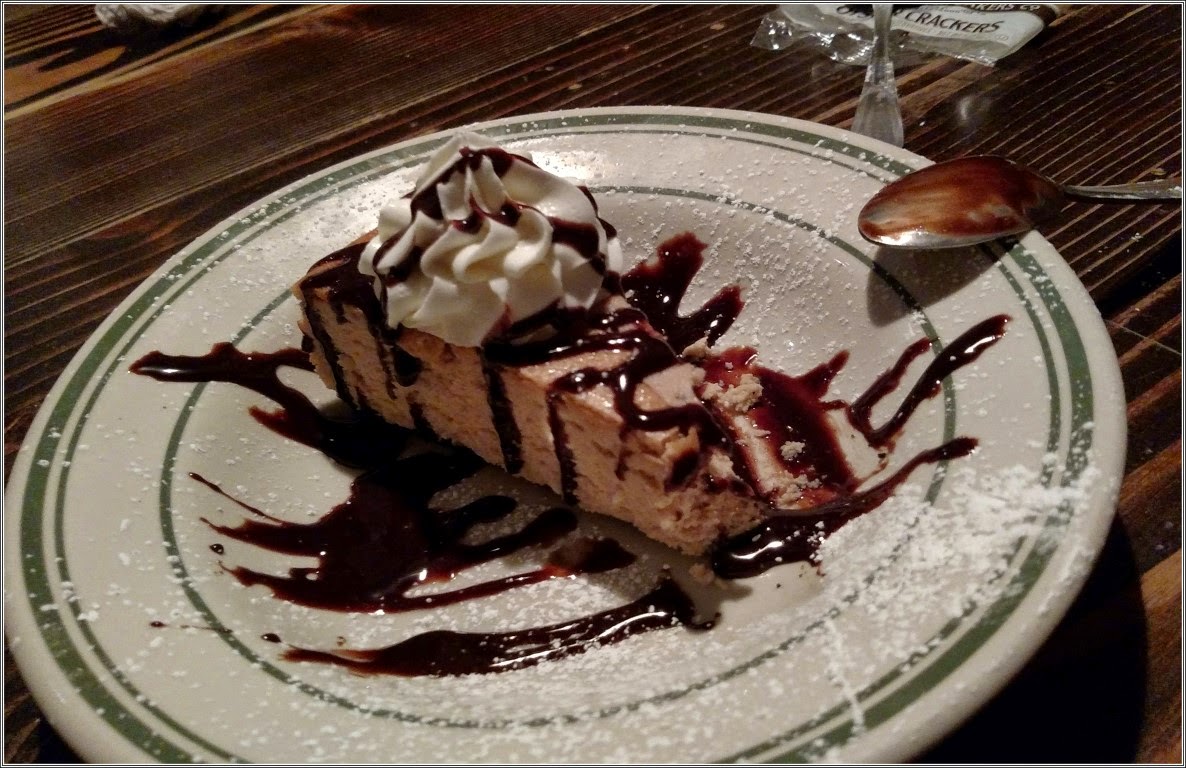 That evening at Ann's, I glance out the window and notice that the sky looks like fire. I grab my phone and start shooting pictures. I go back inside after a bit -- it's chilly outside, until Ann notices new color. 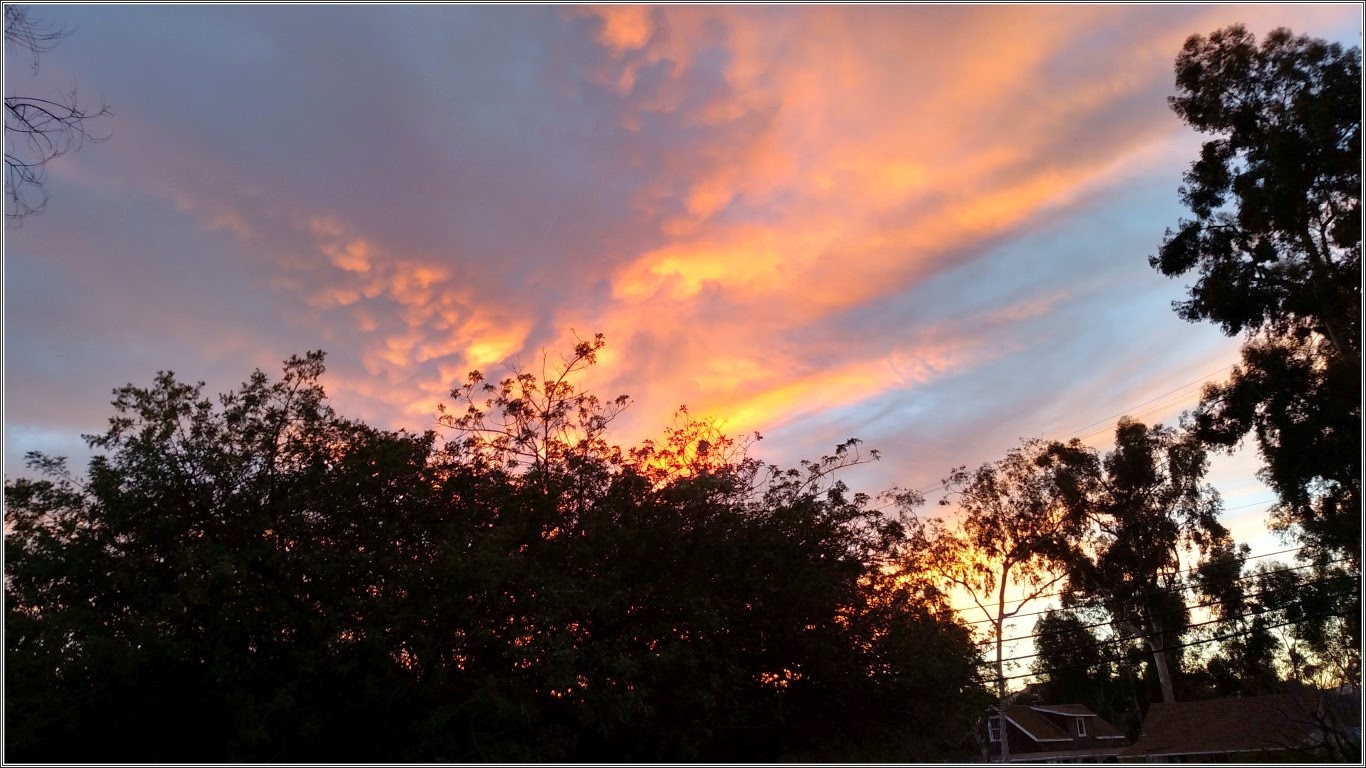 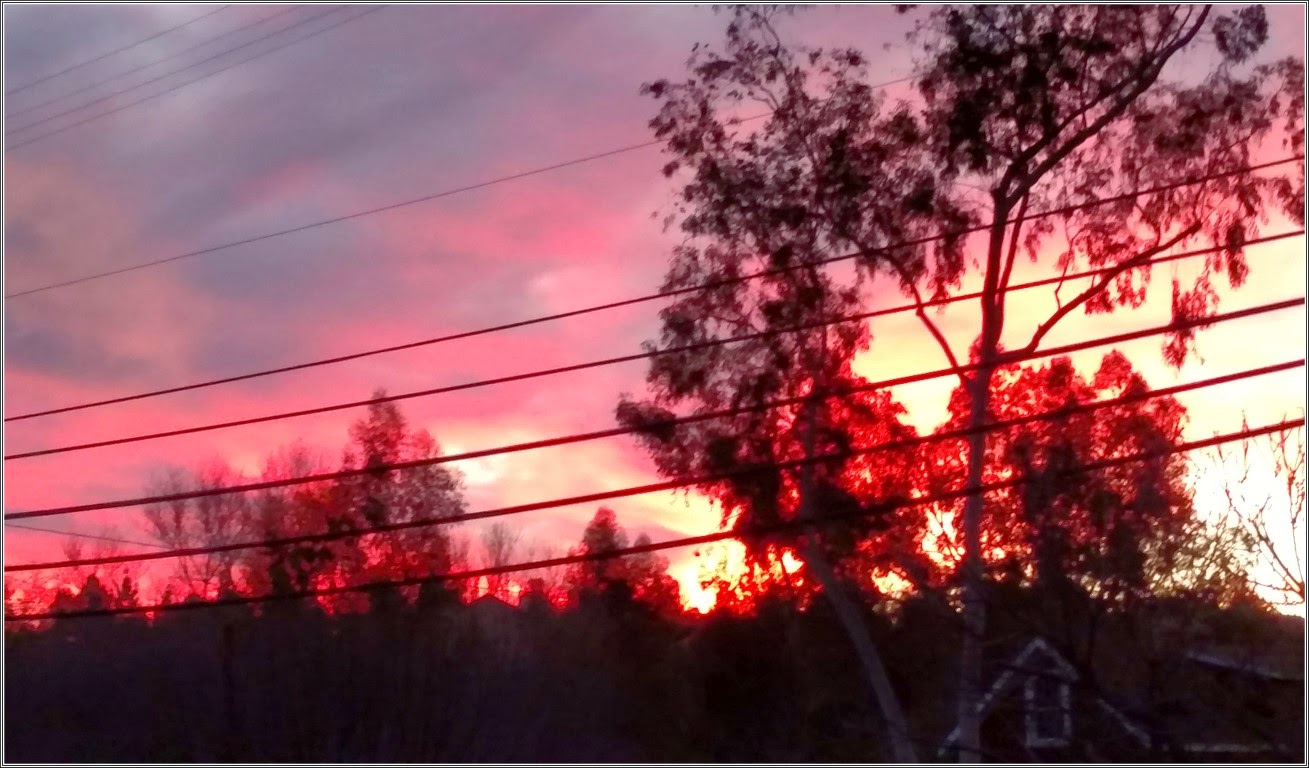 The funny thing is that another cousin posted the exact same views in Facebook as these -- cloud formations and colors -- taken right at the coast, and by TV stations from various places in San Diego County. That's the first time that I realized how massive the cloud formations that form sunsets are, how far they stretch and still form the same picture to who-knows how many viewers. Awesome.

Ann had her hair done this morning and, as she gets ready for bed, models a frilly night cap that a friend had given her. To keep the coif neat. This is her Internet debut. 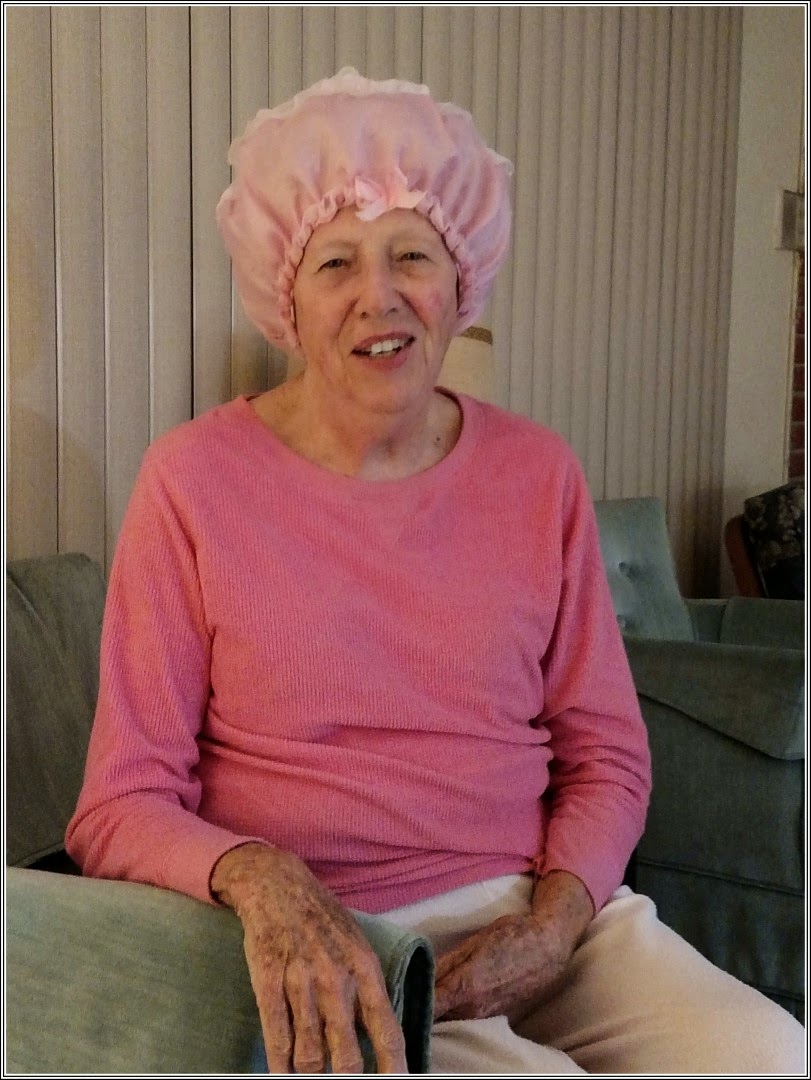 Saturday I meet my Step-Daughter at her house in one of San Diego's beach communities. We swing by a deli where I pick up the tastiest roast beef sandwich ever and she picks out her favorite for our picnic on the beach. To my eternal gratitude, this beach resident carries sand chairs in her car. Since we made our date,  I've been worrying about sitting on a towel on the sand and wondering how the heck I will ever get up. We are quite comfy and the day couldn't be more perfect.. 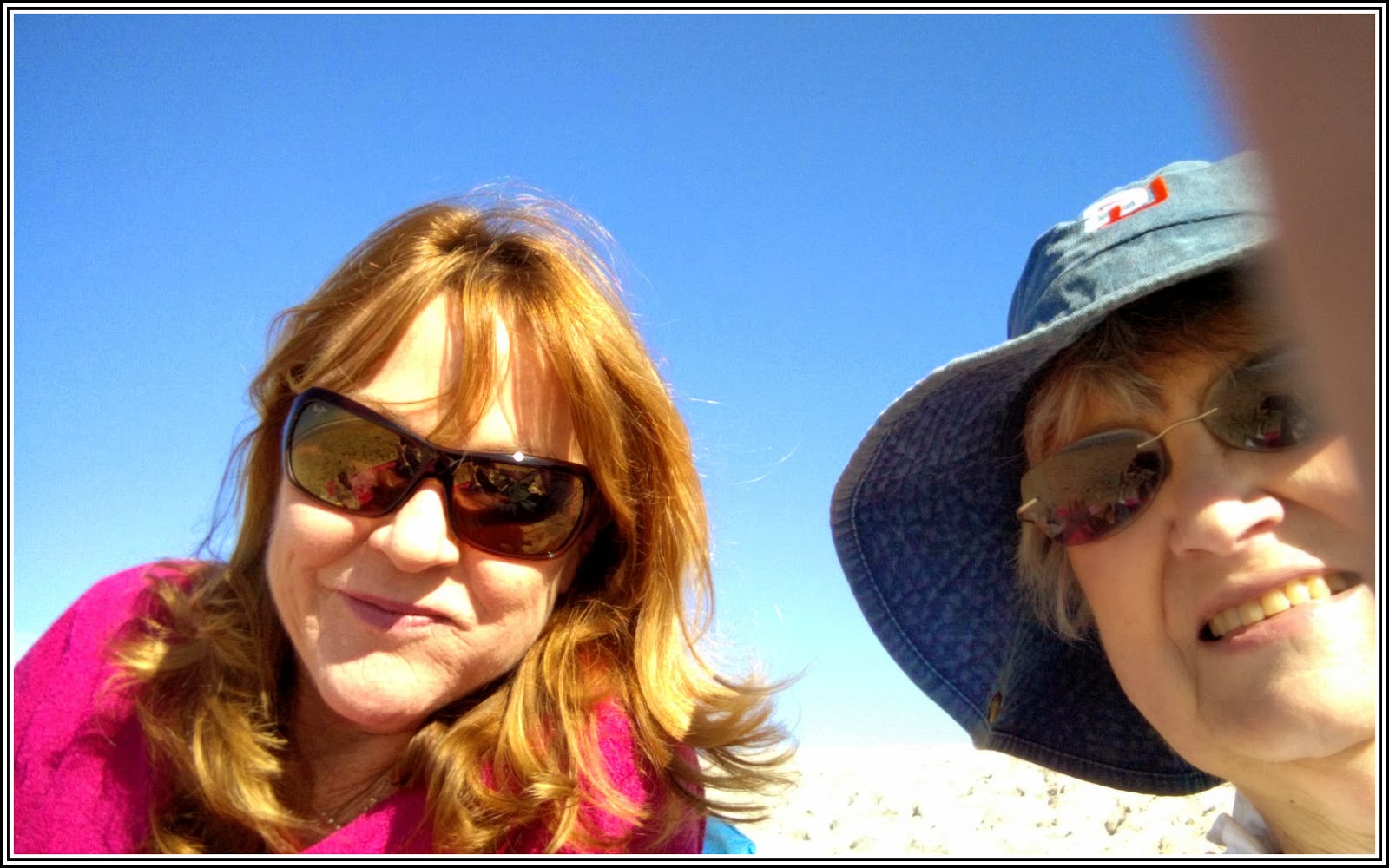 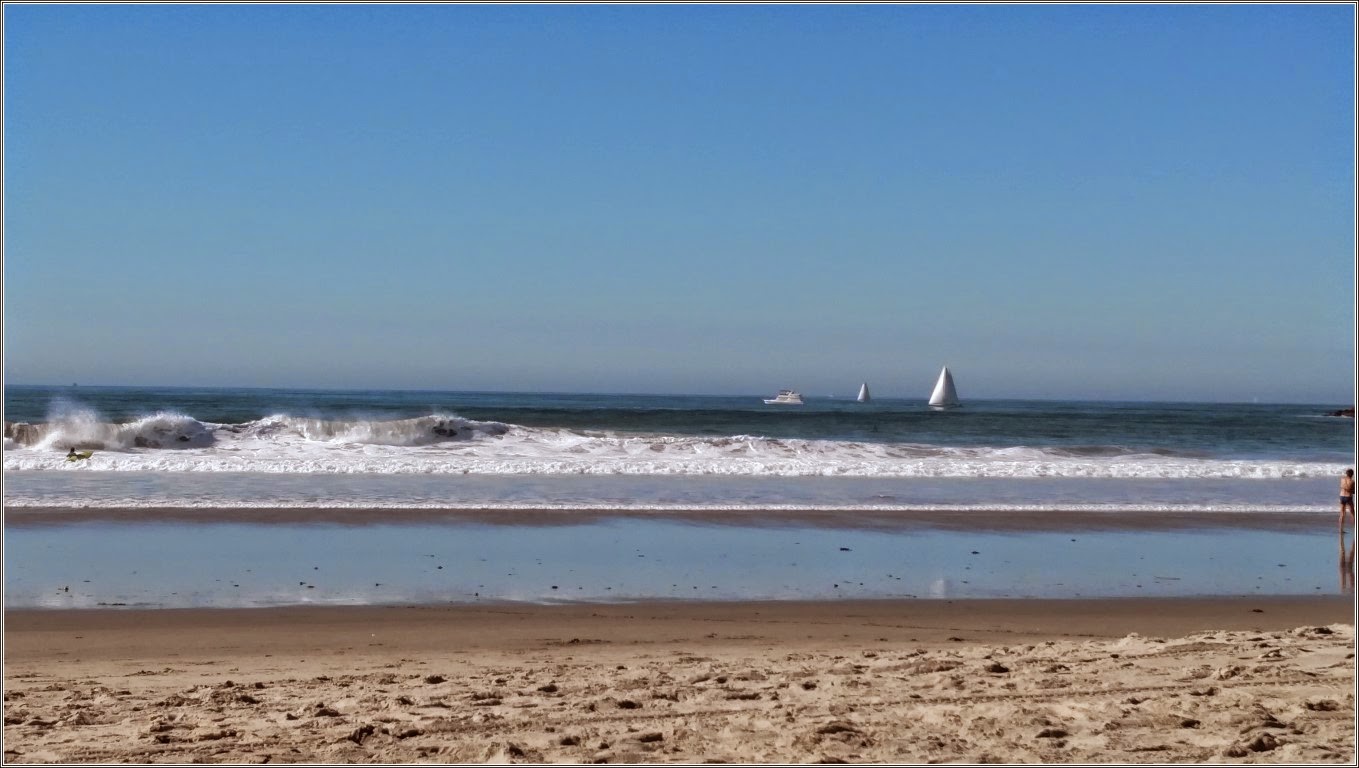 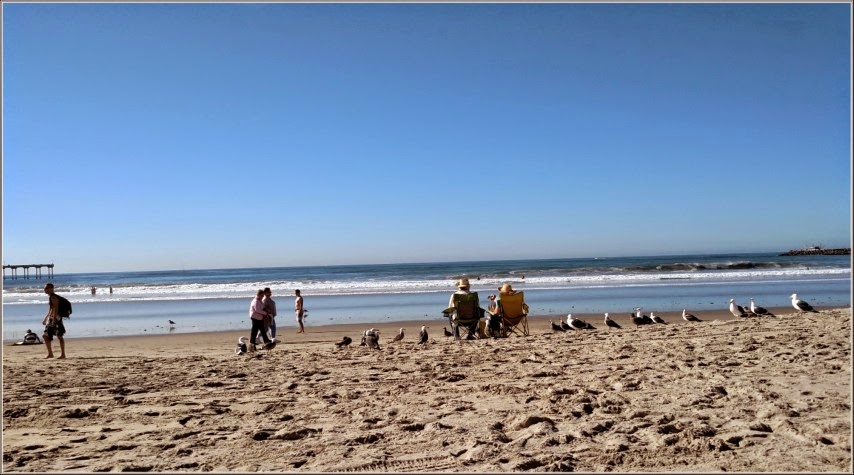 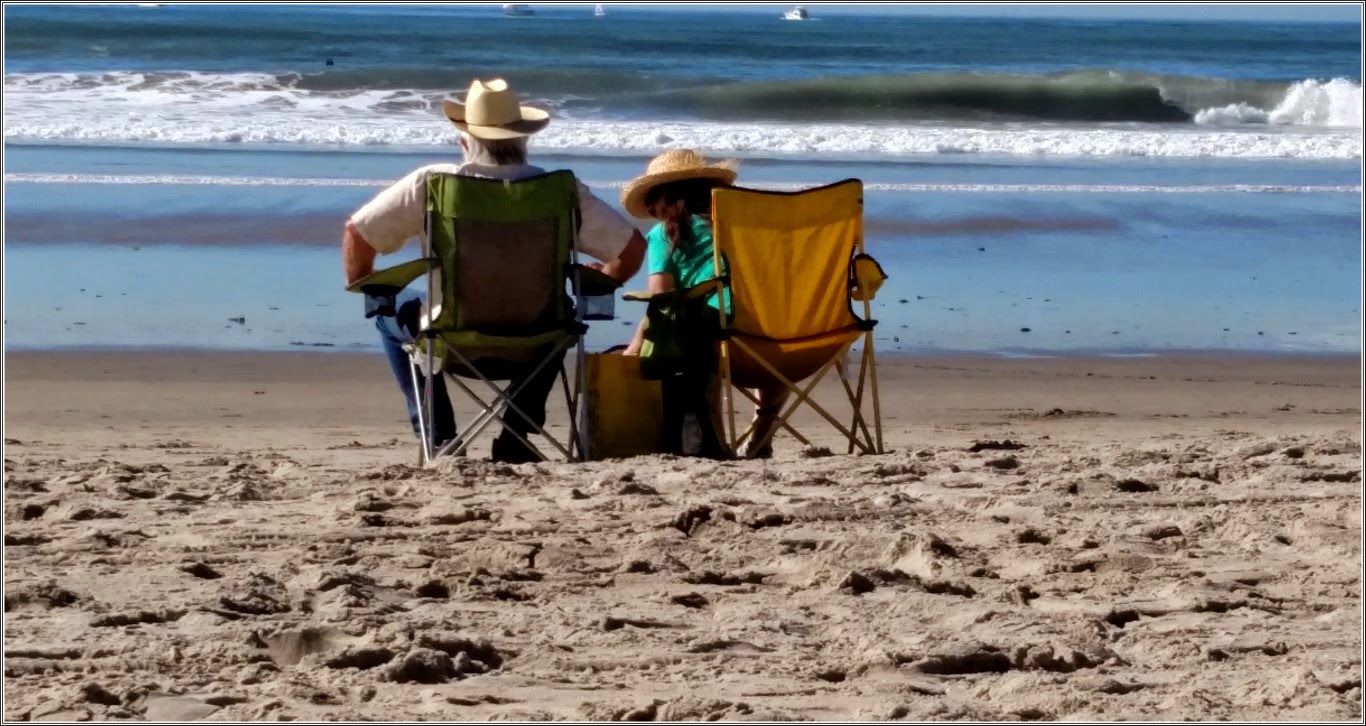 With sun enough, we fold our chairs and our towels and head back to her house. I have a dinner date for later with San Diego Sister-in-Law, and my local Sister-in-Law who is also visiting down south, SDSIL's husband, and their children. (By "local" Sister-in-Law, I mean the one who lives in My Little Town.) They are in the midst of preparing dinner for quite a few people when I arrive. My local SIL made this lemon meringue pie.  After dinner, we pitch in with supplying missing names and identities for family photos which SDSIL's son and his wife are scanning and cataloging. The kids are doing a great job, and it's so nice someone is taking on the time-consuming task. 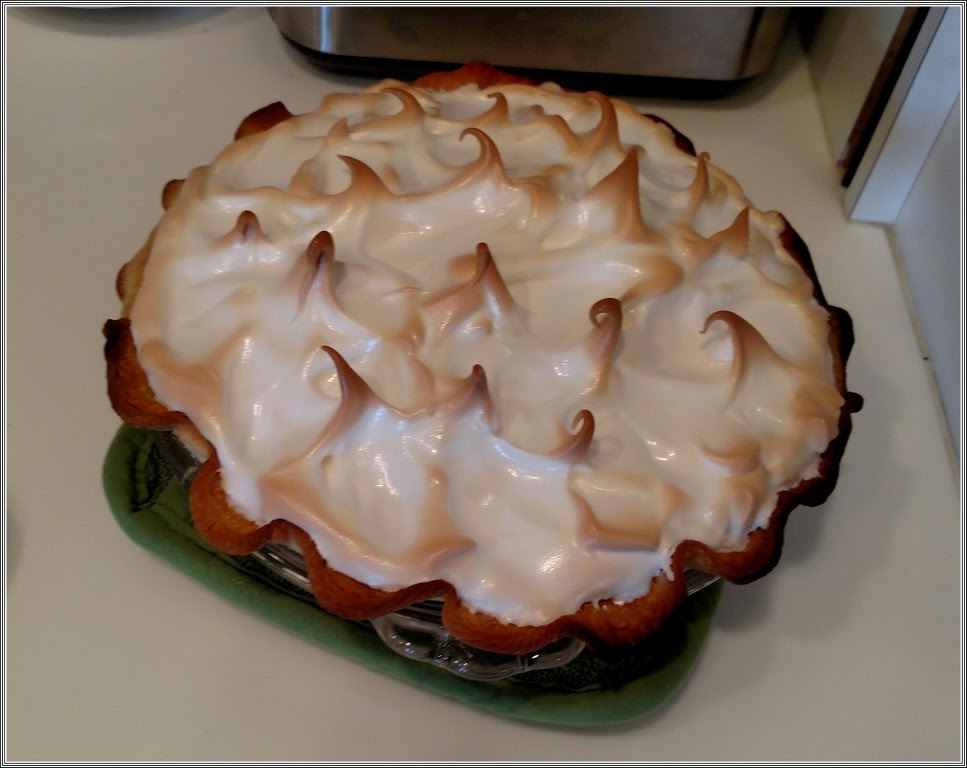 It's cold when I go out to the car and realize I left my jacket in Step-Daughter's car this afternoon. I'll have to go by her house in the morning on the way to the airport. I also realize I have no idea how to turn on the heat. It's fortunate traffic is light as I wander around the road  fiddling with the controls and eventually get the right combo to produce blessed heat rather than refrigeration..


The getaway from Ann's goes smoothly. I allow plenty of time for buying gas and stopping by Step-Daughter's for my jacket. I find the car rental return without too much trouble and find out just how close SD lives to the airport. I should have guessed over the years by the low-flying planes passing over her neighborhood. My plane is delayed. This time of year, weather can delay take offs and landings, so schedules can be affected at either end. That's what happens, but our flight crew is on it to get us in the air and underway at the first opportunity.

It's dark by the time I take BART back to Sister's city from the airport, then catch a cab to her house. She's not there. She and BIL have gone back up to their mountain house.

This visit began early with lemons, but things do have a way of working out, even if not as planned. I guess there's the same underlying thought between "if life gives you lemons, make lemonade" and my blog motto, "A journey that goes exactly according to plan makes for a dull story." Kind of.