Rattling around in my unfocused brain . . .


I'll have a random thought. I want to blog about it, it's partially formed, but I don't get it down before the next random thought that seems like a possibility replaces it. Random thoughts are hanging out there in space.

Reluctance - For example, it's October, Breast Cancer Awareness Month. It's a month of Think Pink. Women (and men) who are cancer free five years after treatment celebrate with marches and pictures. They are Survivors. The man I knew with breast cancer did not survive, although he went through the surgeries and chemo and all that. 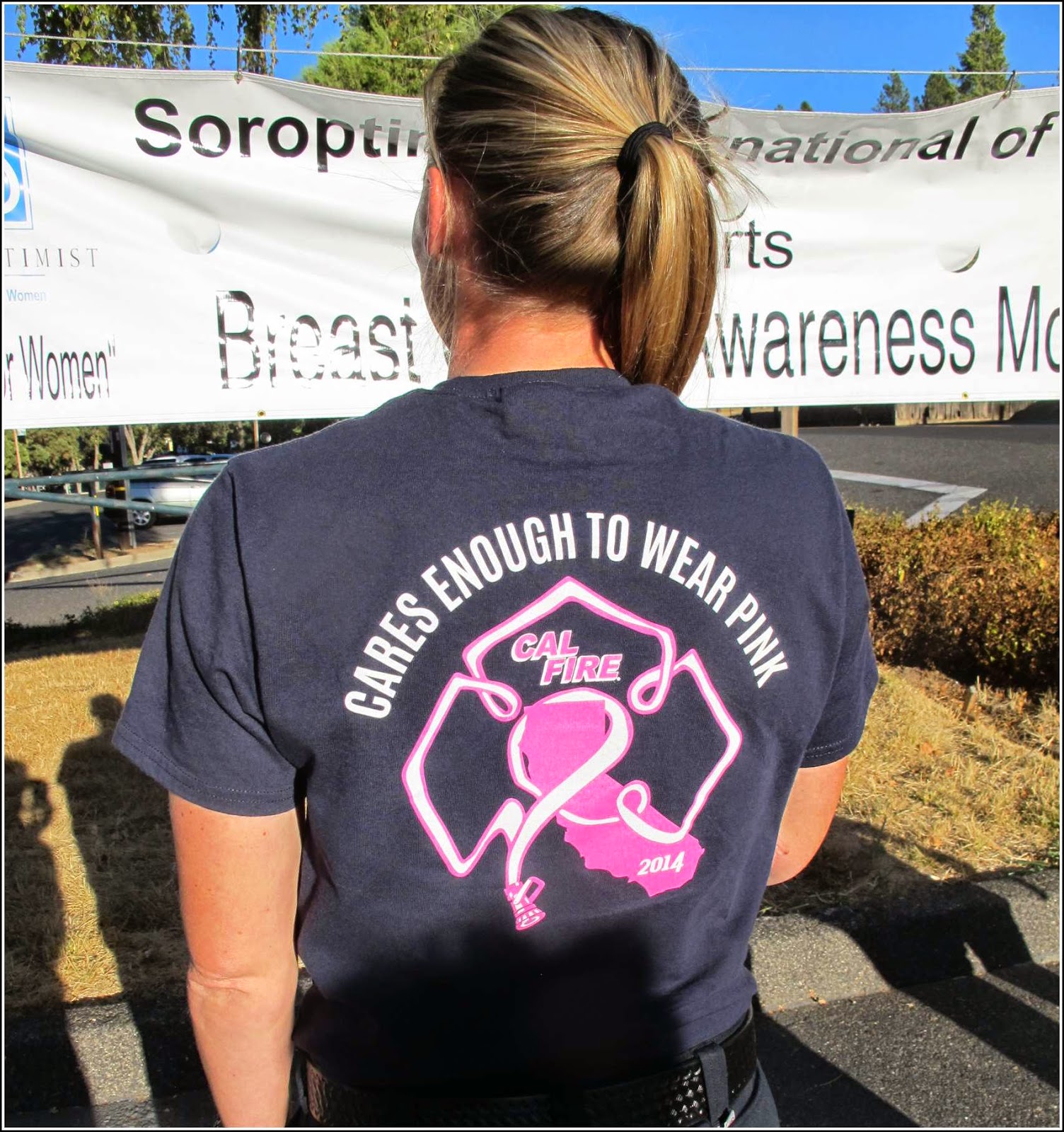 My son refers to me as a Survivor. I'm not sure whether that's a correct calculation. Earlier this year it was 5 years since surgery and radiation, but it was just the end of five years of pills that are somehow called chemo. That aside, I'm reluctant to refer to myself as a Survivor. The bullet point version:

Upshot, I'm grateful that it's gone so well for me and hope it lasts.

TAXES - Yes, all caps for shouting, for the annoying chunk this took out of my week when I wanted to get to other things. Like preparing for Fall Quilt Camp.

I had to leave off filing my 2013 income taxes about a week before April 15 because I went out of town somewhere, like Spring Quilt Camp. I was missing an important piece of data for the taxes, so filed for an extension. The information to that date indicated that I would owe no taxes (a combo of withholding and estimated taxes covered it). The new due date became October 15.

I expected that my income for 2013 would be the same or less than 2012, since I'd finally finished paying taxes on an annuity inherited from my parents. (Warning people: annuities aren't all free money.)  That one little piece of missing data gave me a big income surprise: capital gain on stock sold for my room addition. Entering this little piece of data in Turbo Tax wasn't easy, either. I've used it for many years and they've "improved" it to the point of creating a disconnect, a gulf, more like it, between the language in the Step-By-Step method and that in the Forms method. In endeavoring to enter that capital gains stuff in the right place, TT managed to generate a form for each effort, tripling my capital gains tax. Sheesh. I may have to go back to having an accountant. Soooo . . . even with the correction, that means I should also have been paying estimated taxes for 2014 in April, June and September. I sent a good chunk now and may get a penalty as well. My checking account is way too close to zero at the moment.

I have no photo of this endeavor.


Cats - When I left on my trip in June/July, there was a coterie of feral cats visiting my back deck, and another for the front deck. I knew pretty much the relationships and lineage before I left, and the cat rescue ladies had a mission in my absence to catch, neuter and return as many of them as they were able to do. Hot weather was not in full bloom, so the cats still had remnants of winter coats. When I returned, there were many clipped ears (signifying success with a capture) and short coats (except for a couple of truly long-haired cats) and I had difficulty identifying a few of them. But they stuck with their back-deckness and front deckness habits.

Since I've returned from my September trip, except for three cats, they've mixed themselves all up. And I don't know who's who much of the time. There are a lot of striped cats, and I can't remember who has  facial markings, who has crop-sox or knee-highs or bare feet. On any day there may be only the loyal three out back and the rest swarm over to the lady's across the street. (Does she feed them canned food instead of Atta Cat kibble?)

Some feral kitties are missing, sadly I guess, although I try not to get too personally attached to them.


When I came home from the September trip, my "hot-house flowers" who live strictly indoors, came galloping to greet me when I came through the door. Chloe, my old girl, even galloped up beside her sworn enemy Jean-Luc, with nary an exchanged hiss between them.

I noticed, however, that Chloe was turning away from her canned food, in which I conceal her medication, after eating only a couple of bites. I learned she'd been doing that with the cat sitter as well. Mealtimes became a struggle, and I can't leave her medicated leftovers out within reach of the other cats. I gave up. I could not force her to eat the medication.

We've had a few extra years together due to her medication. She improved for a long time, but age is getting to her. She's 15 now and has declined rapidly since that cheerful greeting. I'm now awakening daily, wondering...


The Thursdays Out  NeedleCrafts ladies have been on a knitting tear. It may have started because Judy decided to de-stash her enormous collection of yarn. This apparently was not the first or the last time that she came in with big boxes of yarn to distribute to the knitters (practically everyone except me).


They've done knit hats to donate to cancer patients, preemies, the homeless, and their own grandkids for quite awhile. They decided to do items for sale at the pre-Christmas craft faires and gift shops. One shop asked for knit sets with hat, scarf and gloves. And now there are fancy scarves for the craft faires.

The non-knitter -- me -- is preparing fabric for a couple of quilt kits to get to work on. This fabric is from a kit called Heat Wave. 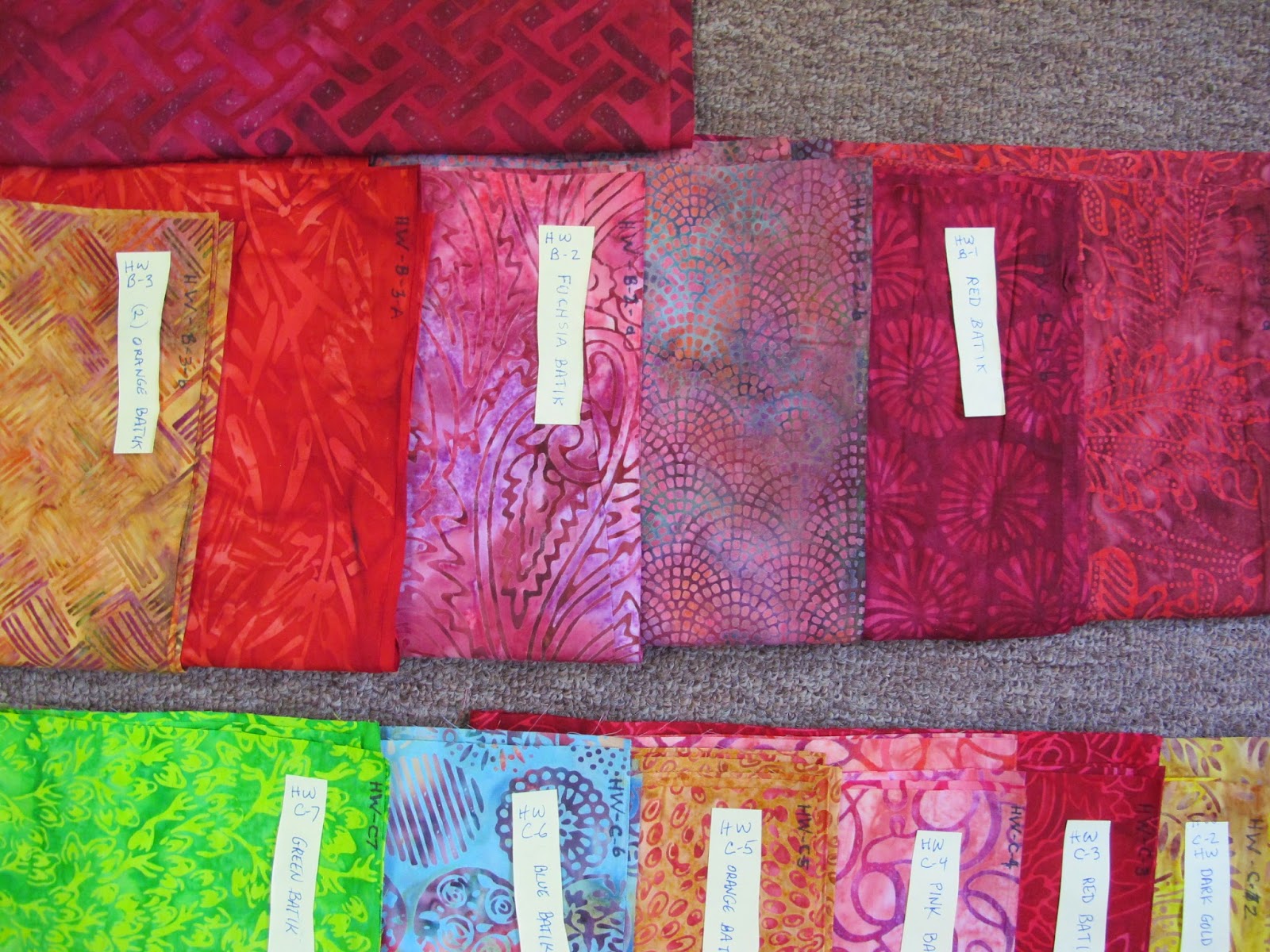 I got this fabric at Patchwork Europe. The pattern called Framework, and it's German. There are English instructions enclosed, translated from German, which are not altogether clear. I tried to get a better translation with Google Translate. It appears the translation I received IS by Google Translate. 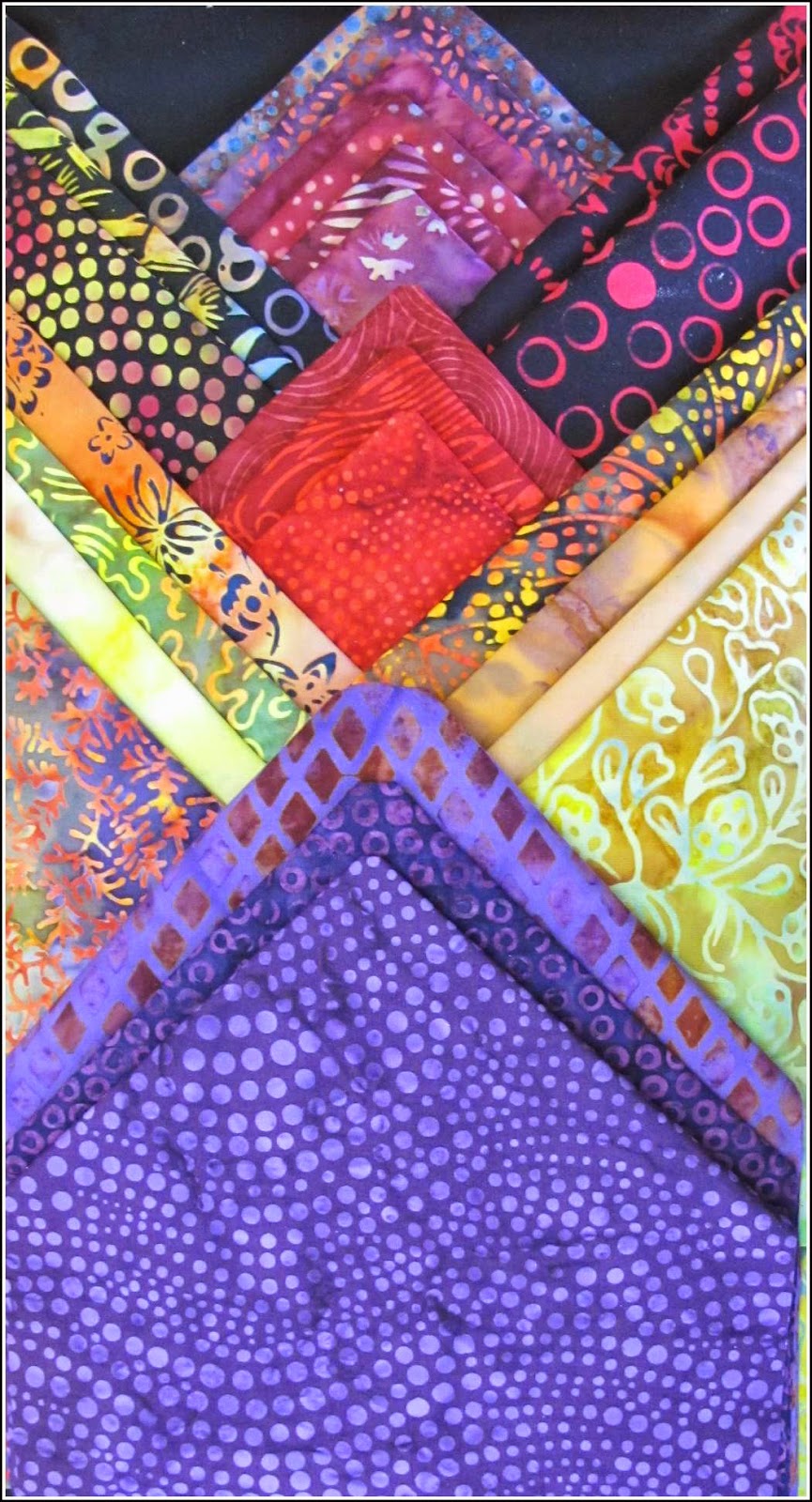 On Thursdays, in the room next to NeedleCrafts, there's a seniors' exercise group that meets at the same time we do. Their leader came over to have one of our people take photos of them at their Halloween party. I was not the official photographer, but it sounded like a good photo op nevertheless.


Be it known that that is definitely NOT the official photo. Their leader, the cowgirl on the right, was trying to organized them so they all looked at the same photographer at the same time for their picture. And she wanted to make sure the underpants on the gentleman were visible in the photo, a mystery to me. It took several tries. Reminded me of herding cats.

So I Googled Captain Hunter Spence, as written on the pad, which had references to Captain Underpants and something to do with baseball. My intent was to provide you a link to explain this reference. I learned while watching the World Series game last evening between San Francisco and Kansas City that I'm probably the last person in the world to have heard his name. (I haven't been paying that close attention to baseball in general these days. Not since the last time the Giants were in the World Series.)

There was another Halloween Party, for the RV club. I'm still a member, even though I haven't had an RV for quite some time. I miss it. A lot. Particularly not being able to camp in Yosemite Valley. I make up for that to a degree by hoteling it there, but it's not the same.

Costumes were optional, and few opted in. There were at least decorations in the spirit of Halloween. 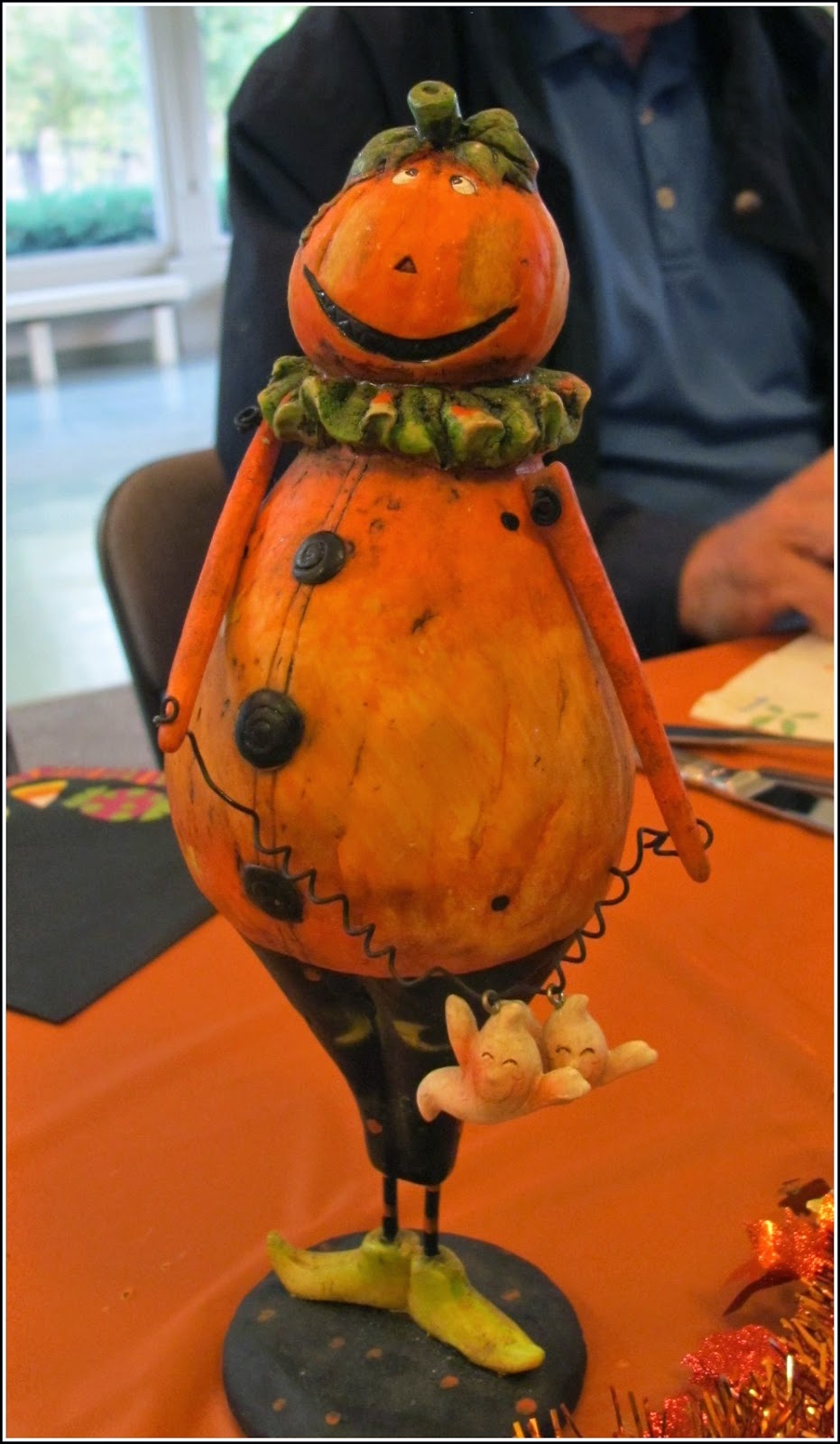 Living History and Community Airport Days - These are annual events, held on the same day in October. They're a fine opportunity for taking pictures of fun community events. So sister and I sped off to the park in town where a flea market was underway along one perimeter of the parking lot (perused but didn't buy), then strolled to the adjacent library parking lot to visit Living History Day. 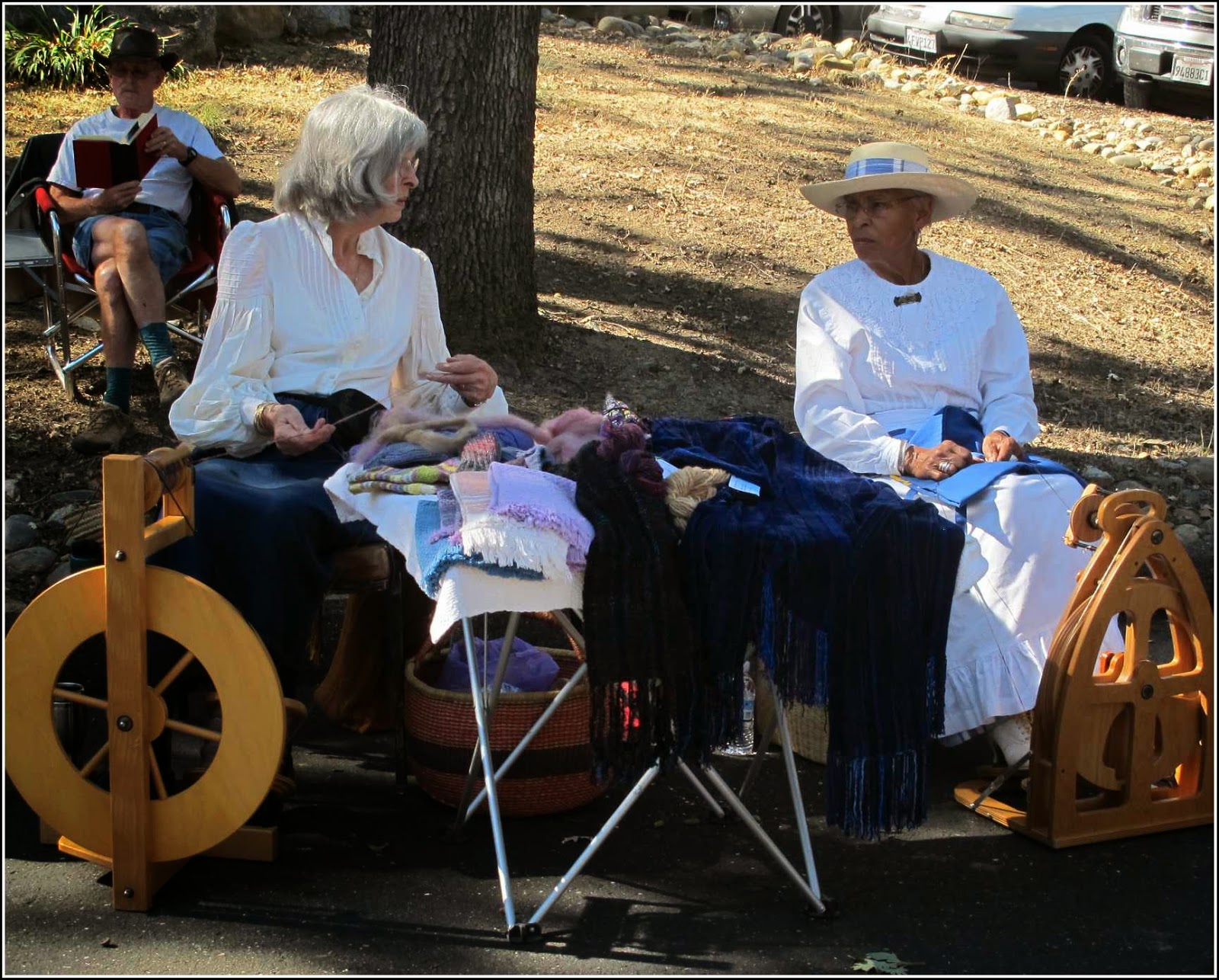 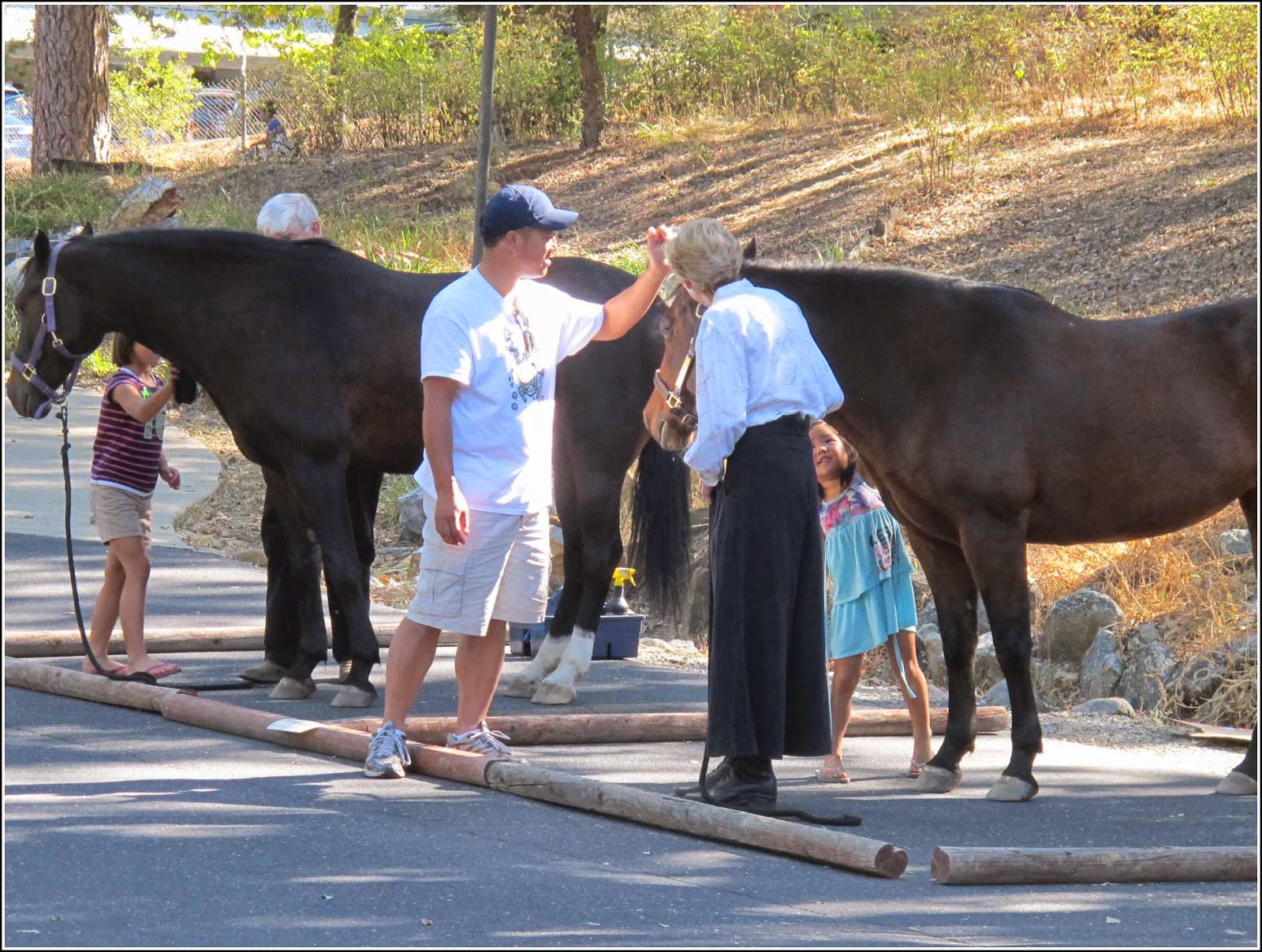 Sister and I took lunch home for Brother-in-Law and us, after which we headed for the airport. We had to park a long way away, with a bit of an uphill climb, to get to the action along the runway. We got our chairs set up in the shade of the hangers and I reached into my purse for my camera.

No camera. I'd left it in the car and didn't feel like making the trek to get it.
Ergo, no airplane pictures this year.


There was a nice quilt show at the church yesterday. Lots of pictures, but I'll show those later.