Honest to Pete, when I told you about the flashback/premonition about a collision between face and pavement, I wrote it "before." Turns out, it was premonition.

I know myself, even without Sister reiterating it, that I need to use my walking stick -- or, more sportively, one trekking pole -- whenever I'm out in the world walking, that I must pay attention to every step. That's hard for me. I chronically operate with several simultaneous thought streams -- you can call it multitasking or scatterbrained, take your choice -- and focusing on just one of those doesn't come easily.

When it comes to towing my little luggage train (rolling backpack hitched to rolling suitcase), I cannot also handle the stick. It's more of a hazard than a help, and the train itself gives me a certain amount of balance. Sister's Friend was giving me a ride to the BART train to the airport. I put my stick in my suitcase because I've had it rejected by security screening, put my luggage on the front porch which Sister's Friend loaded into her car, locked the front door of the house from the inside, went out the back door to walk around the house, and as I rounded the corner, that tilt-tilt-tilt that you just can't recover from led to my left cheek colliding with the gravel, and skin getting scruffed up on all my pointy parts. At least I did not scrape another stripe down the middle of my face, nor inflict bruises visible outside my clothes. But I did tear a little hole in the knee of my pants -- first thought of a woman who has fallen, one of two pair I'm taking on the trip.

On the plus side, Sister's Friend had a couple of band-aids that I slapped on the worst scruffs, and when we got to the station, I just missed the elevator up to the platform, so took the escalator and walked right onto the arriving train. I would have missed the train had I waited for the elevator to come back.


At the airport, I met five other tour participants, including the trip leader and her assistant, all of us traveling on the same plane from San Francisco to Paris to Lyon aboard my most favorite intercontinental aircraft, the Airbus A380. It's Air France's big one and doesn't fly all the time from SFO. I've previously confessed that I've, um, strayed from Sardine Class (or, as the airlines fudge the reality, "Economy") to a step up into Premium Economy, which gives a few perks in-between Economy and Business classes.  I had a seat upstairs by a window and it's dark at night now, unlike the twilight of a midsummer crossing, so the cabin crew did not make me close the shade; thus, the many photos. Unfortunately the perspective out the window doesn't change much during the course of the flight.

When I finally decided to watch a movie, I found out my headphones weren't working properly. Last trip my entertainment system didn't work at all. At least the screen worked this time so I could watch the maps and tail-mounted camera view.


Hey, any of you meteorology-savvy folks out there know what they call these clouds that are lined up like strings of pearls across the sky?


An otherwise perfect flight lands with a bit of a thunk, when the left wheels hit first and hard and the wing dips. 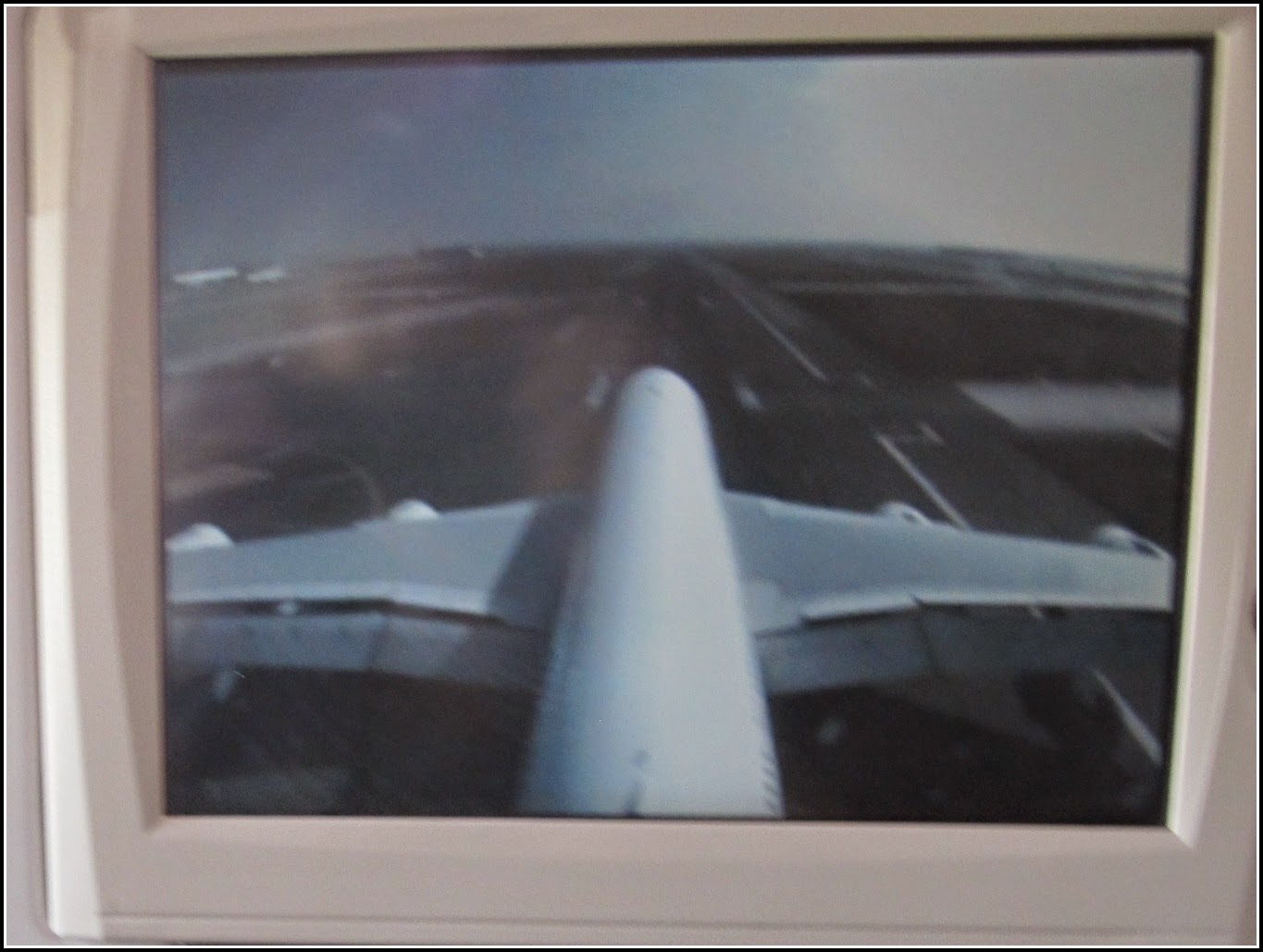 I sit back to wait for the usual 20-minute -- more or less -- taxi to the terminal. But I guess we did our taxi quota back there on take-off in San Francisco because we make a short turn off a short trip on a taxi-way and come to a halt. My screen showed us parked on a taxi-way even as everyone starts to stand, but a reboot of the entertainment system revealed we were nose to nose with a terminal building.

All's well that ends well and we're now in Paris. But Lyon is our destination, so there's a bit more travel involved. The taxi may have been short but the walk to the appropriate domestic terminal is long and convoluted. I will be sent through a different gate for my security check for a French domestic flight. New and surprising was a shuttle train and my puzzlement from failure to mentally untangle the terminal designation and the gate designation and get myself to the right place.

That flight on an A318/319 was crammed to the eyeballs. There are no photos of routes or aircraft, as there wasn't enough room to pull my camera out and point it toward anything, let alone anything of note to shoot. A cab that the trip leader had hired in advance loaded up all our luggage and drove us into town. 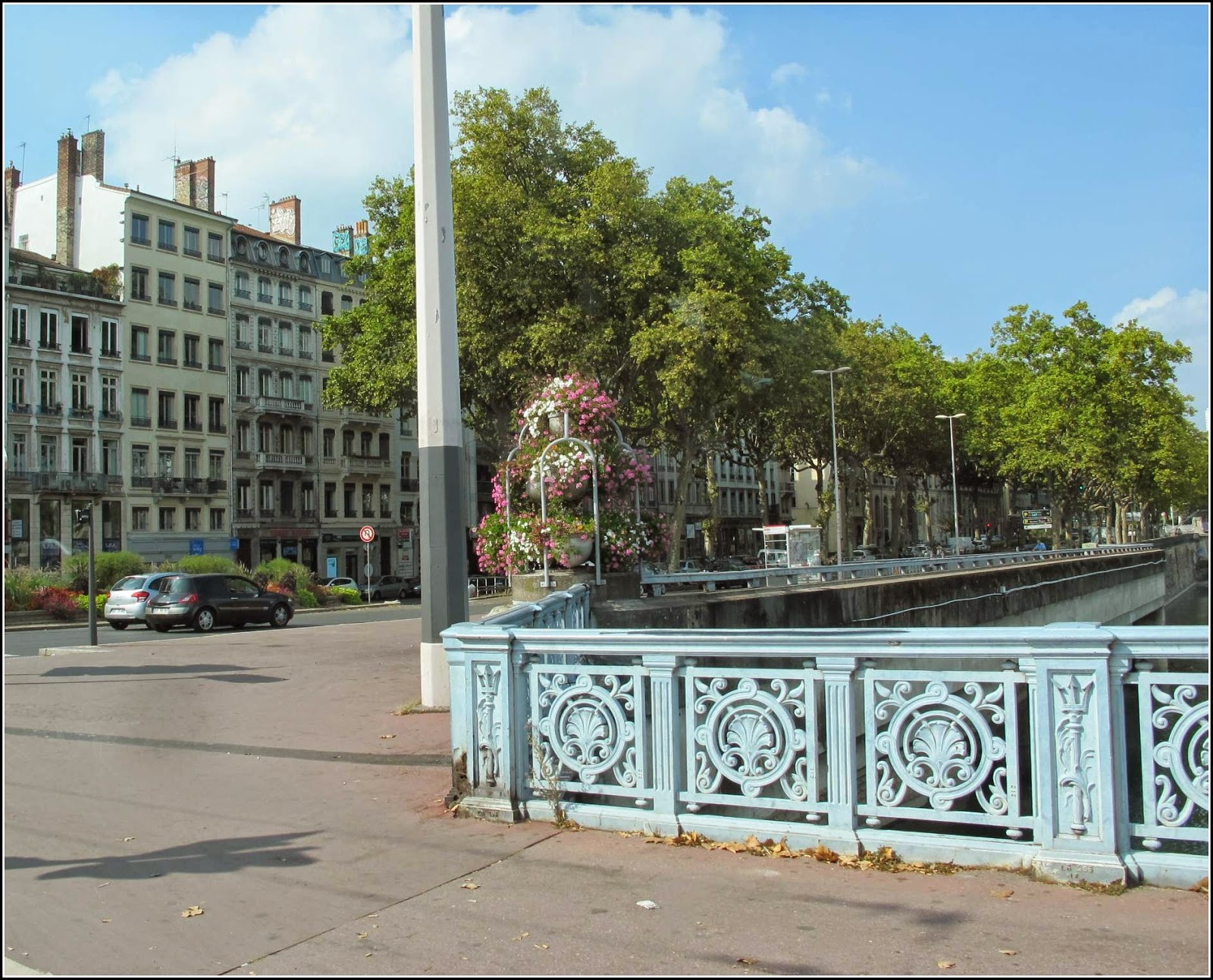 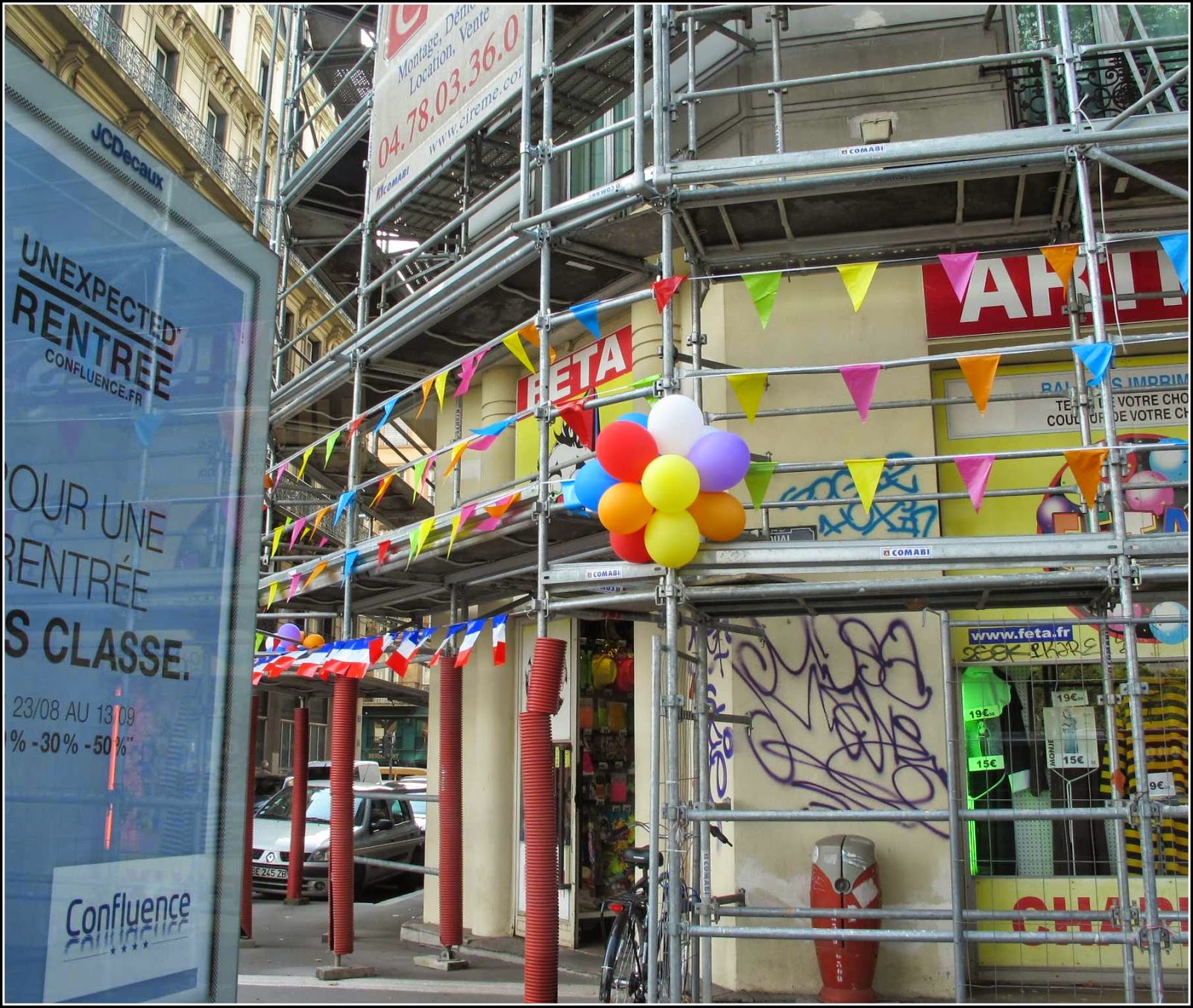 My room is small, and seemed really small at first, but now it just feels cozy. 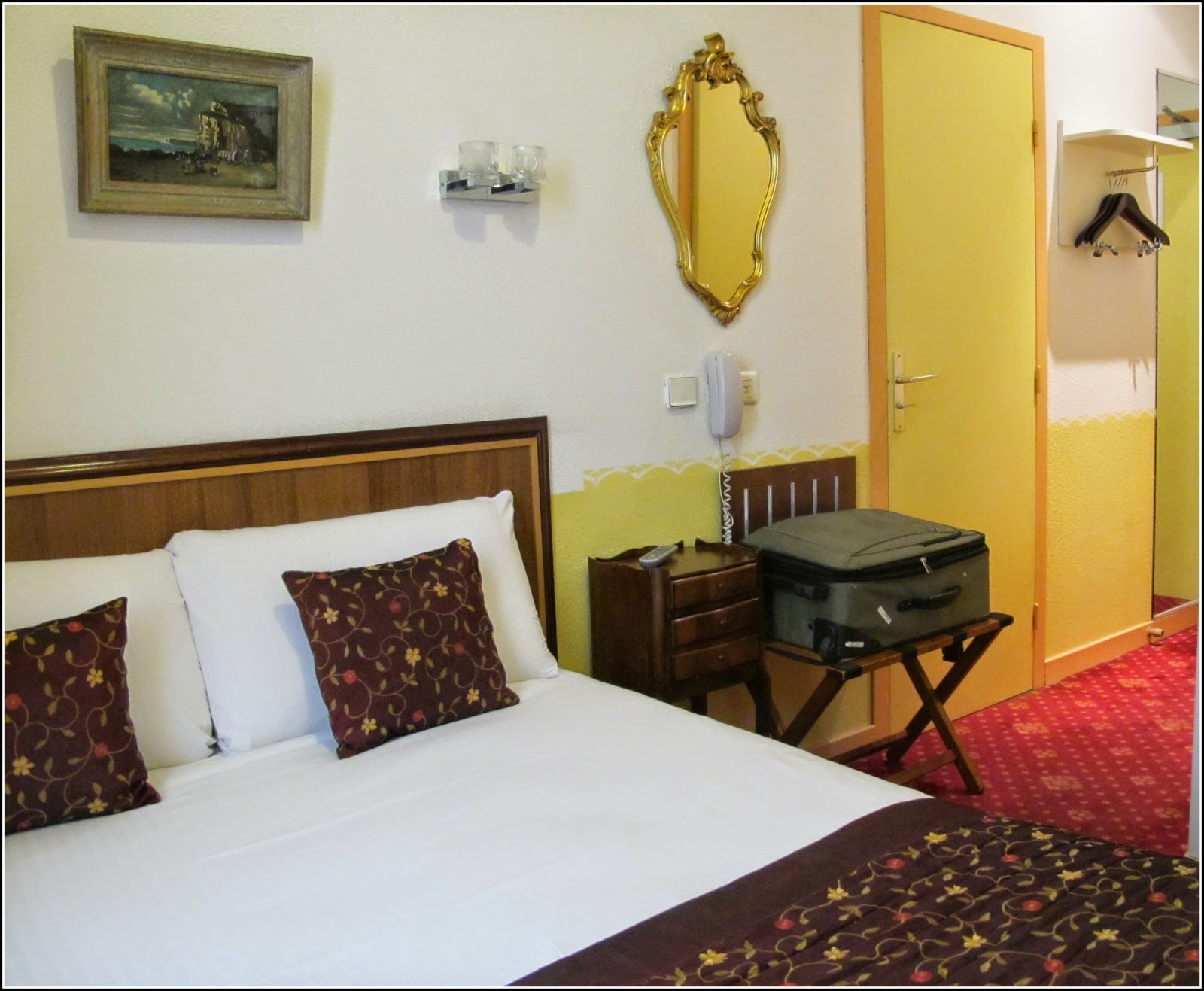 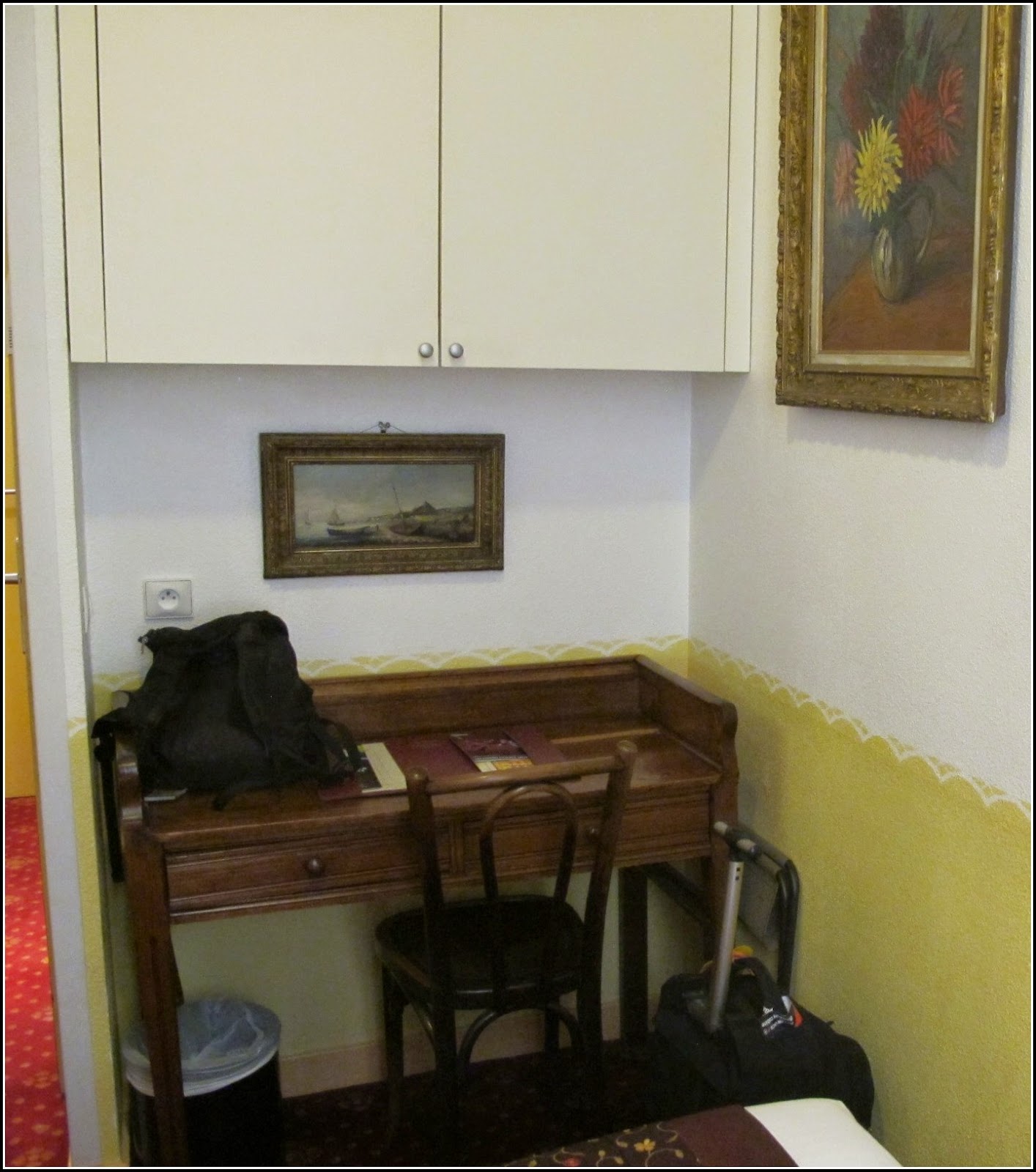 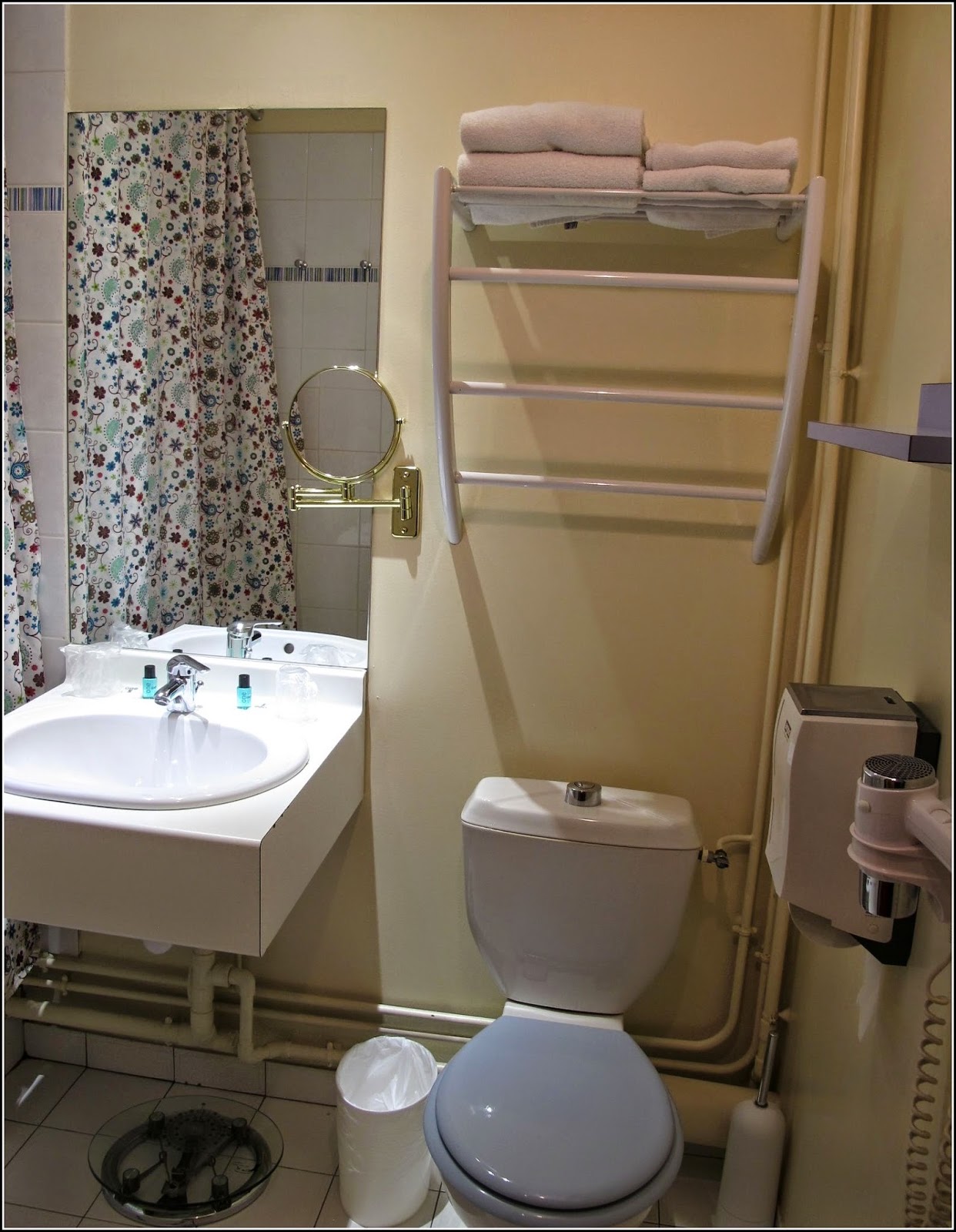 Why is it when you wake up after the first night in France, you feel like it was yesterday that you left home?