After the big mural, we pile back into the taxis to visit the live silk-weavers in the Croix-Rousse quartier of Lyon. We head for the workshop of Monsieur Georges Mattelon. M. Mattelon died in 2004 at 91, but we'd met him the first time I went to the workshop on a quilters' tour. I might even have been  there one more time before his death. Silk fabric was being woven at that time, although it may have been for demonstration purposes, rather than production.

We were warned when we came in that the workshop was a mess. I get the impression that they are not usually receiving visitors, but there is a core of people who want to clean it up for more of a museum-type use. 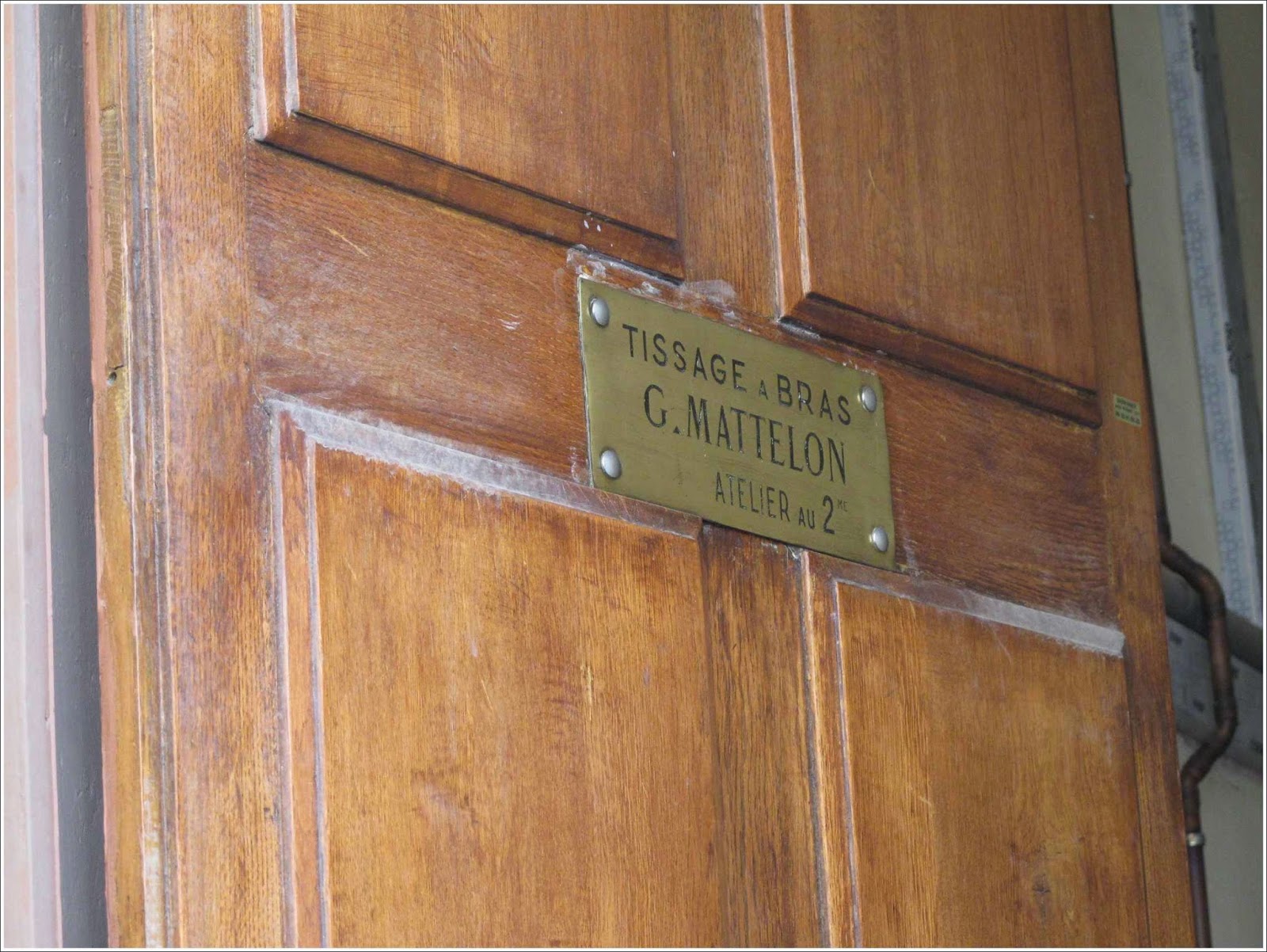 Our group troops up two tall floors of narrow stairs to the workshop. 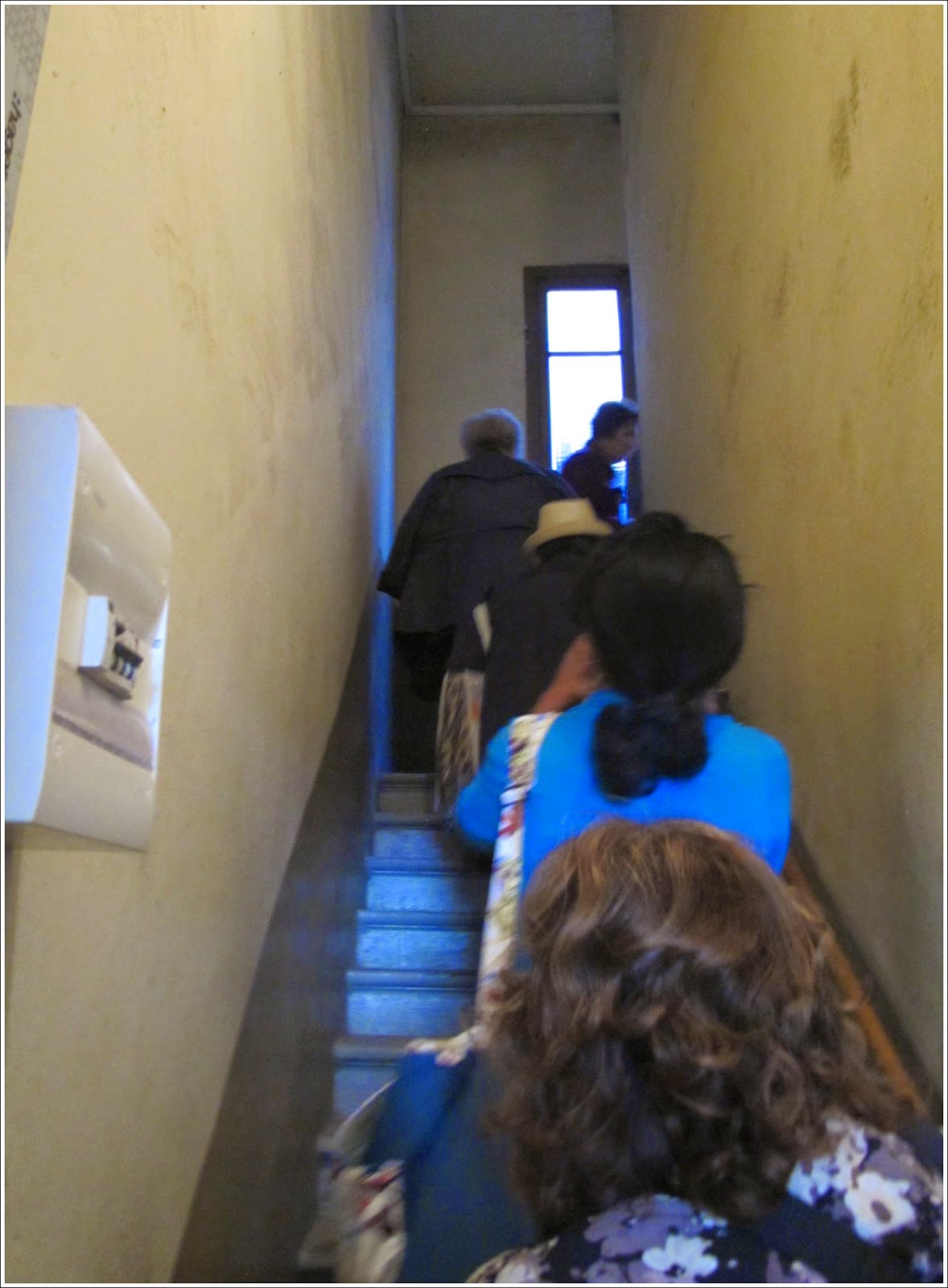 We are greeted by one of the four main silk-weaving machines in the room. We are a little cramped for space with so many people, so I really can't tell you which machine does which weaving process. 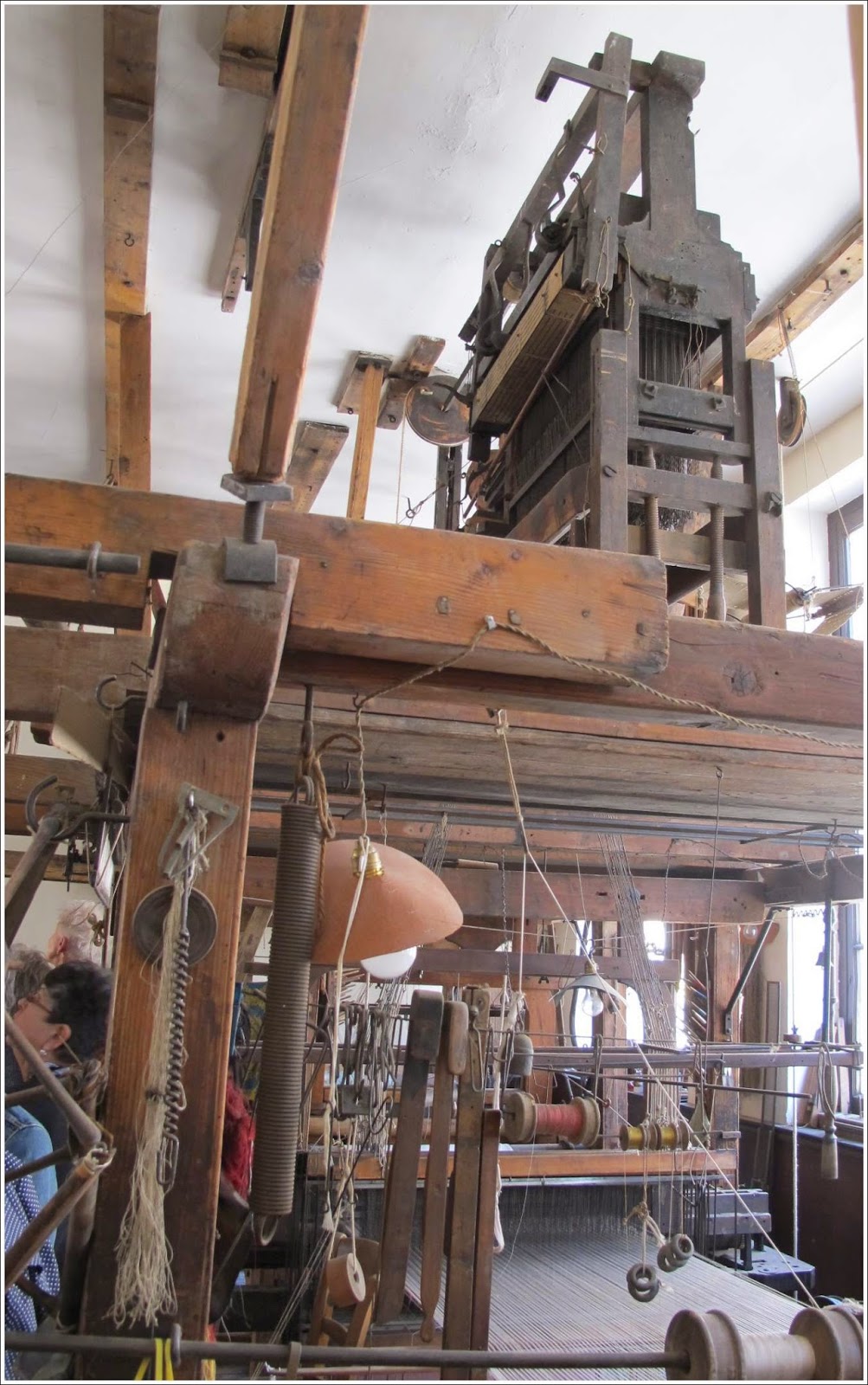 Here's the little critter at the heart of the whole thing. Think of those green tomato worms that can chaw down your tomato plants overnight. These remind me of those. Imagine discovering that you can pull a strand, a very long, lightweight, very strong strand out of the cocoon it comes from (actually, I don't know what tomato worms hatch out of) and twist several of these long strands together to create a soft, silky, weavable thread that can be made into fabric. A Chinese guy did that nearly three thousand years B.C. (Historical stuff very roughly translated from French from this.) 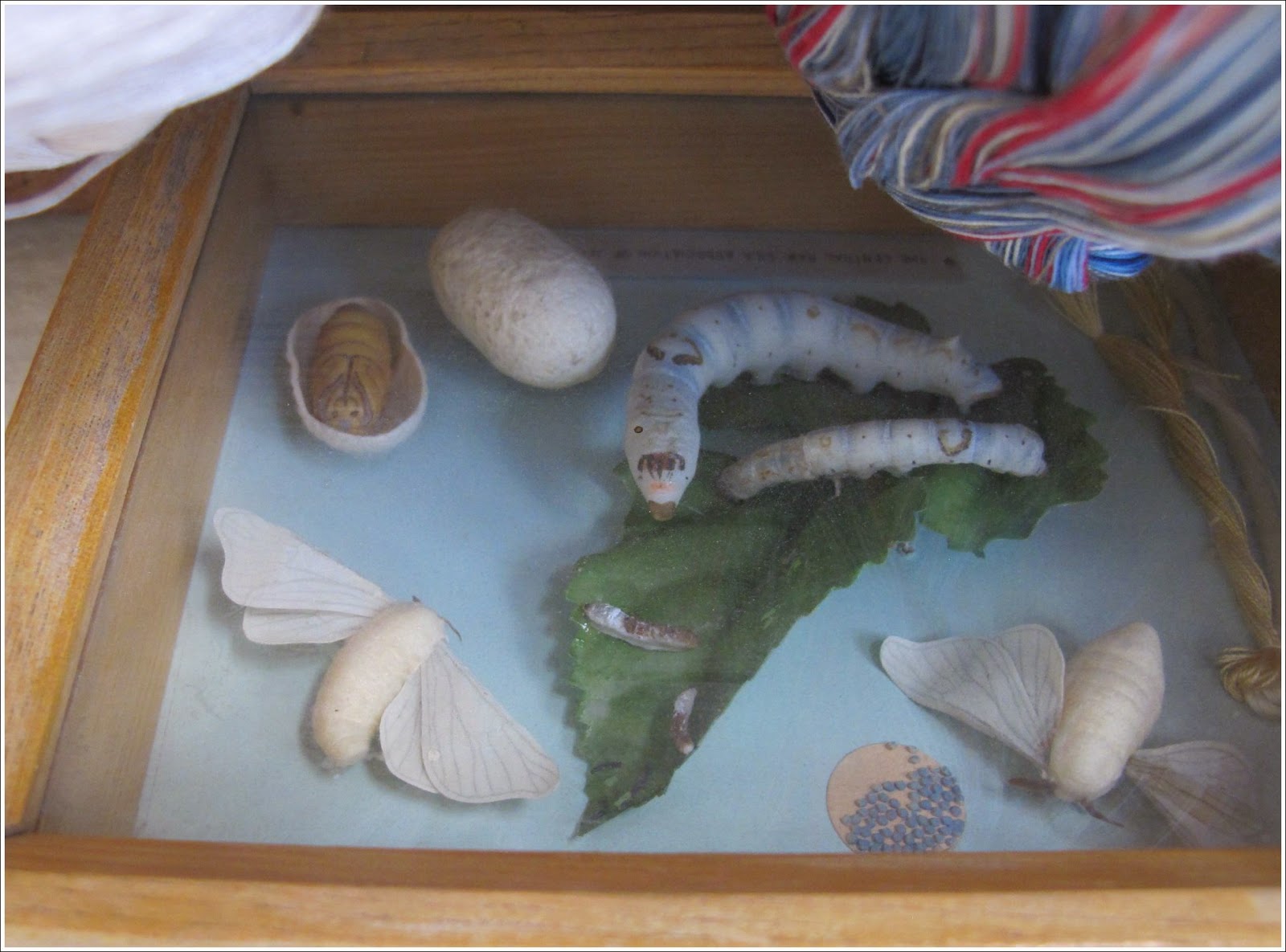 The Greeks and Romans knew about silk fabric, which arrived from Asia via the "route de la soie," but without knowing how it was obtained.

About the 6th Century A.D., the Byzantines brought cocoons to Europe, and the secret evolved into commerce, particularly in Spain and Italy. Later, silk production made its way into the South of France. It was the 16th Century when the Italians, very prominent in Lyon, brought in the knowledge to produce fabrics of gold, silver and silk locally.

From the 18th Century, Lyon became the "capital of silk." It's position at the crossroads and fairs made it easy for the fabrics to reach the grandest families of Europe.

At this point, my translation falls a bit apart, as I can't follow the French sentence construction. I think it says that Croix-Rousse became the major fabric district in the 19th Century. Jacquard weaving was invented by Joseph Marie Charles. This technique allowed for intricate designs, notably the "N" mounted on a laurel crown that was the Emperor Napoleon's symbol, which gave a lot of cachet to the production method.

As a new quarter, the Croix-Rousse was built for myriad silk weaving shops, with very high ceilings to accommodate the tall weaving machines, and many windows to make the most of available natural light for a home-based weaving industry.  Small loft quarters might be included for the family. The entire Croix-Rousse district thumped with the clickity-clack of the weaving machines. (There's an even more onomatopoeic word that the French use, but I'm unable to relocate where I read it.) 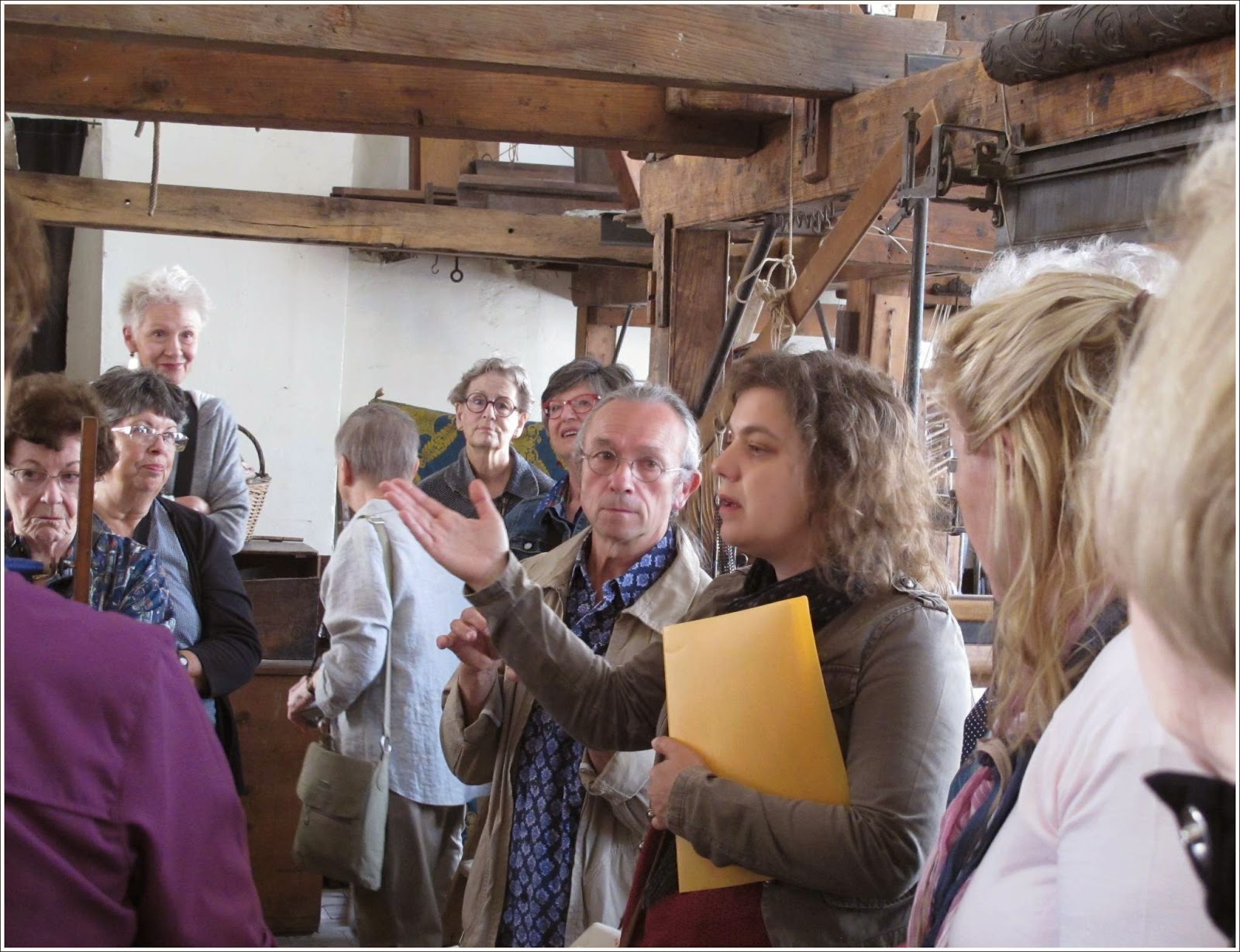 
Our personal guide, Sandrine, translates for the gentleman who seems to have been enlisted at the last moment to tell us about some of the history and artifacts in M. Mattelon's workshop, while we wander about and look at them. 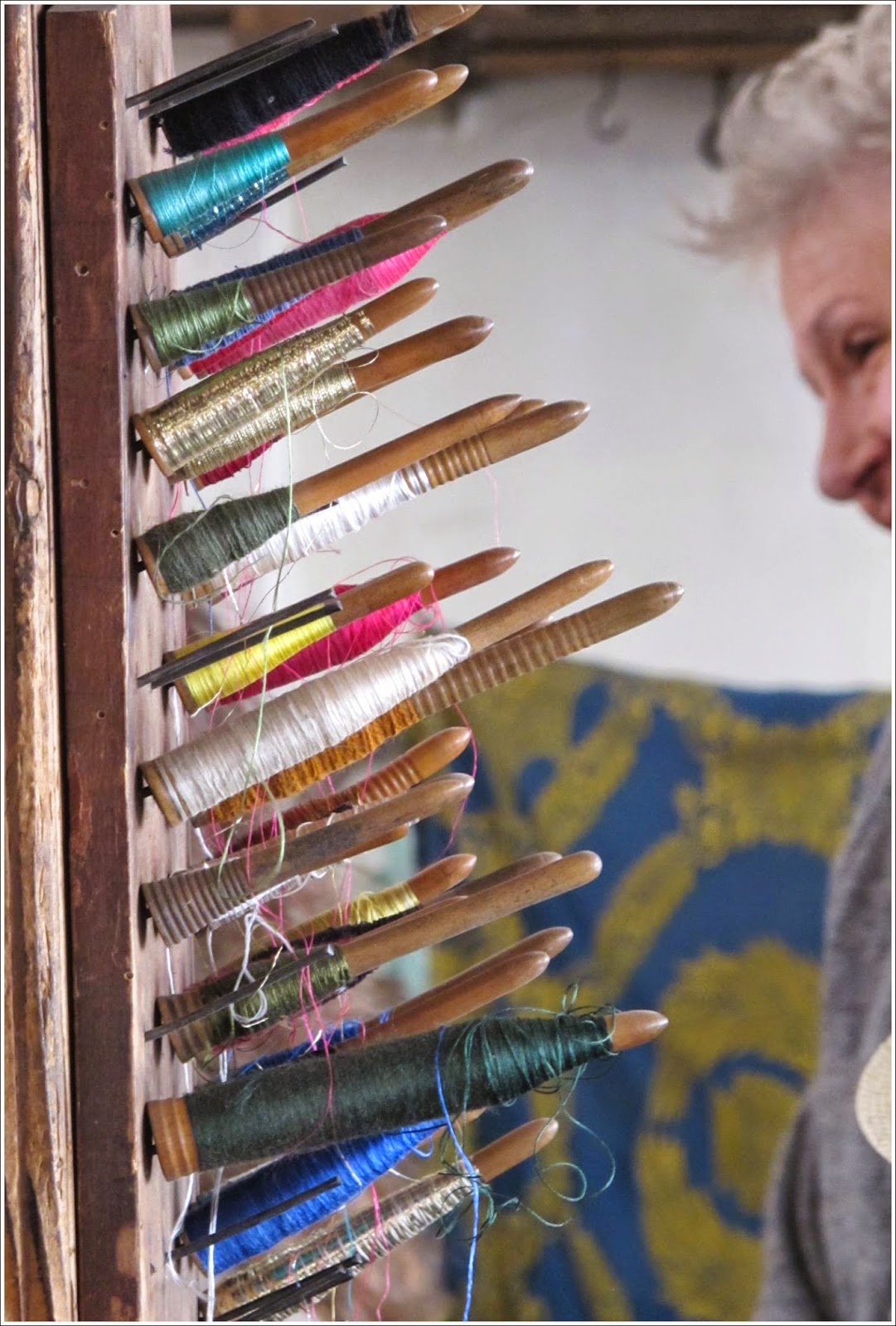 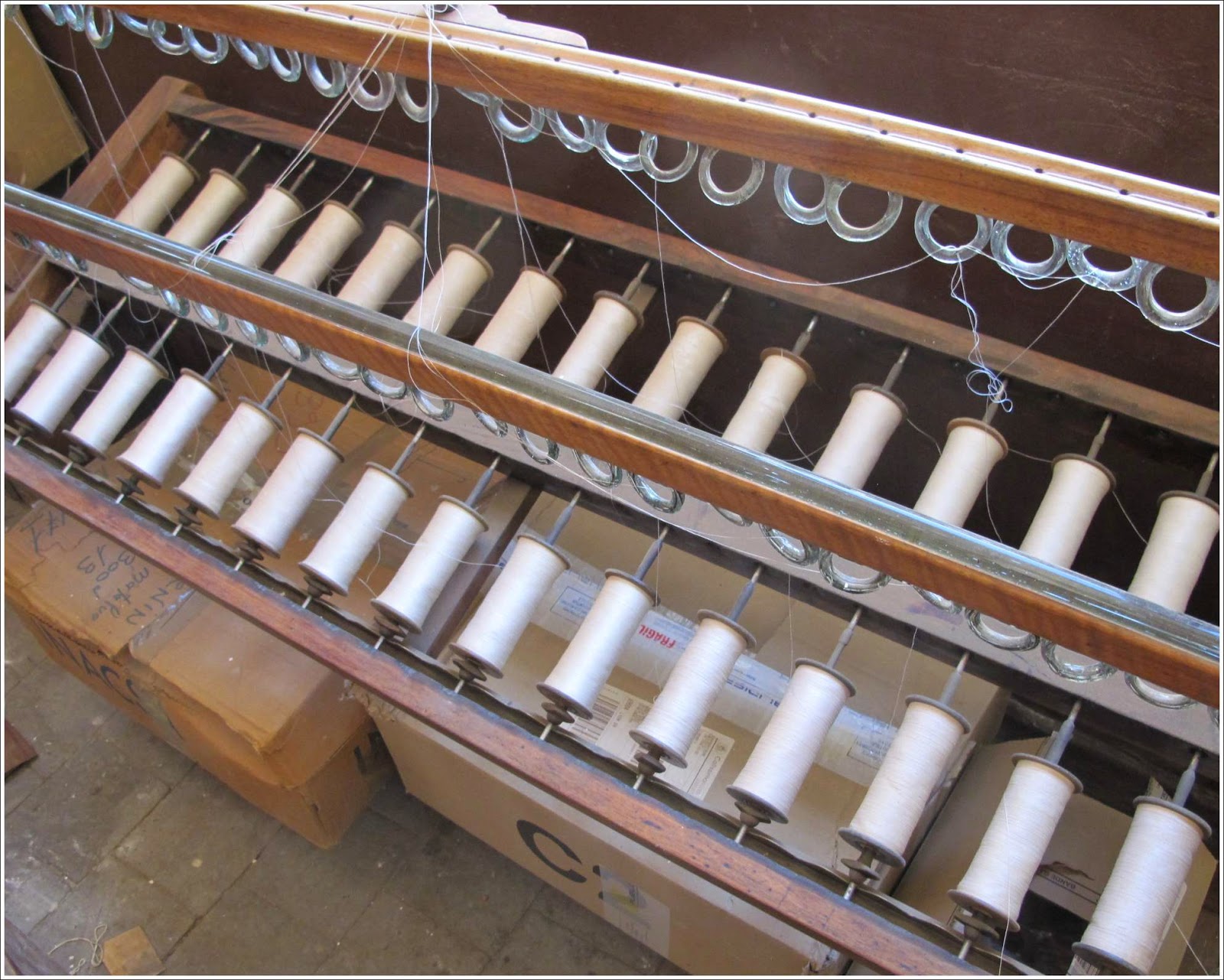 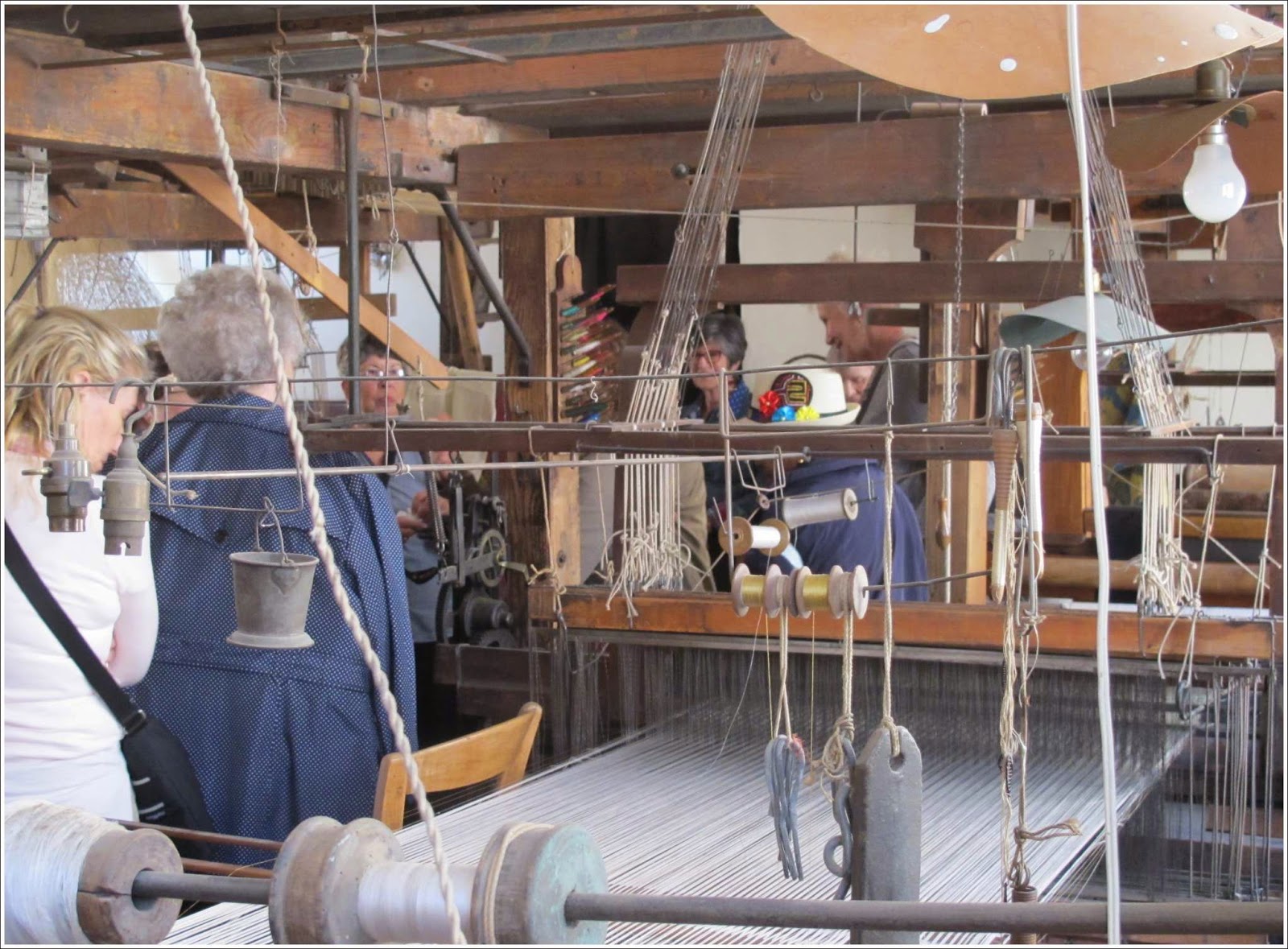 Here's the brains of the jacquard weaving system, and a precursor to modern computers. Just like the old punch cards in our early computer days, each hole  or non-hole is a yes or no for a needle to drop down and pick up a particular warp thread, allowing the weft thread that crosses it to show or not. Each horizontal line of coding creates the pathway for one weft thread, and the cards advance one line at a time. 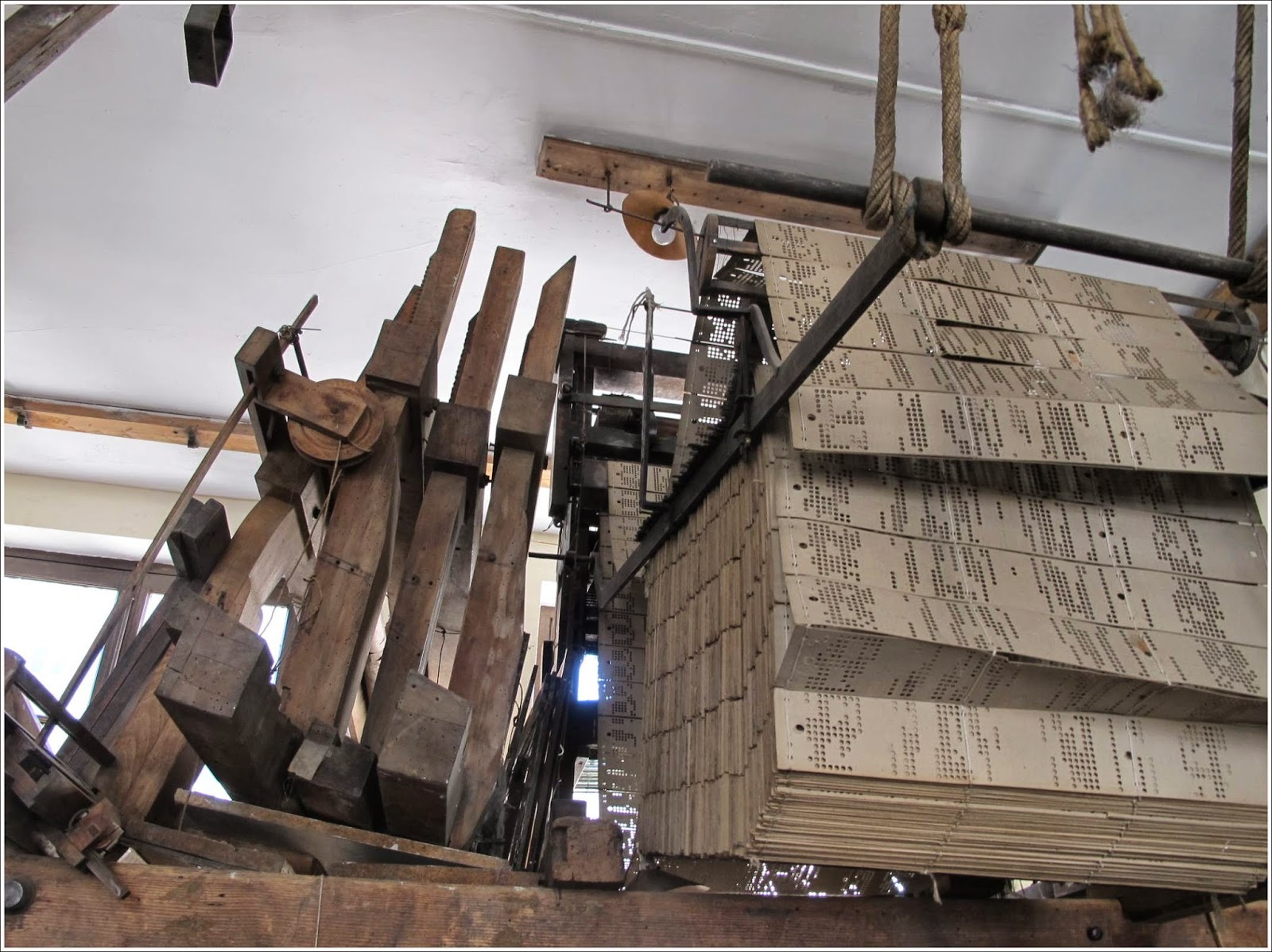 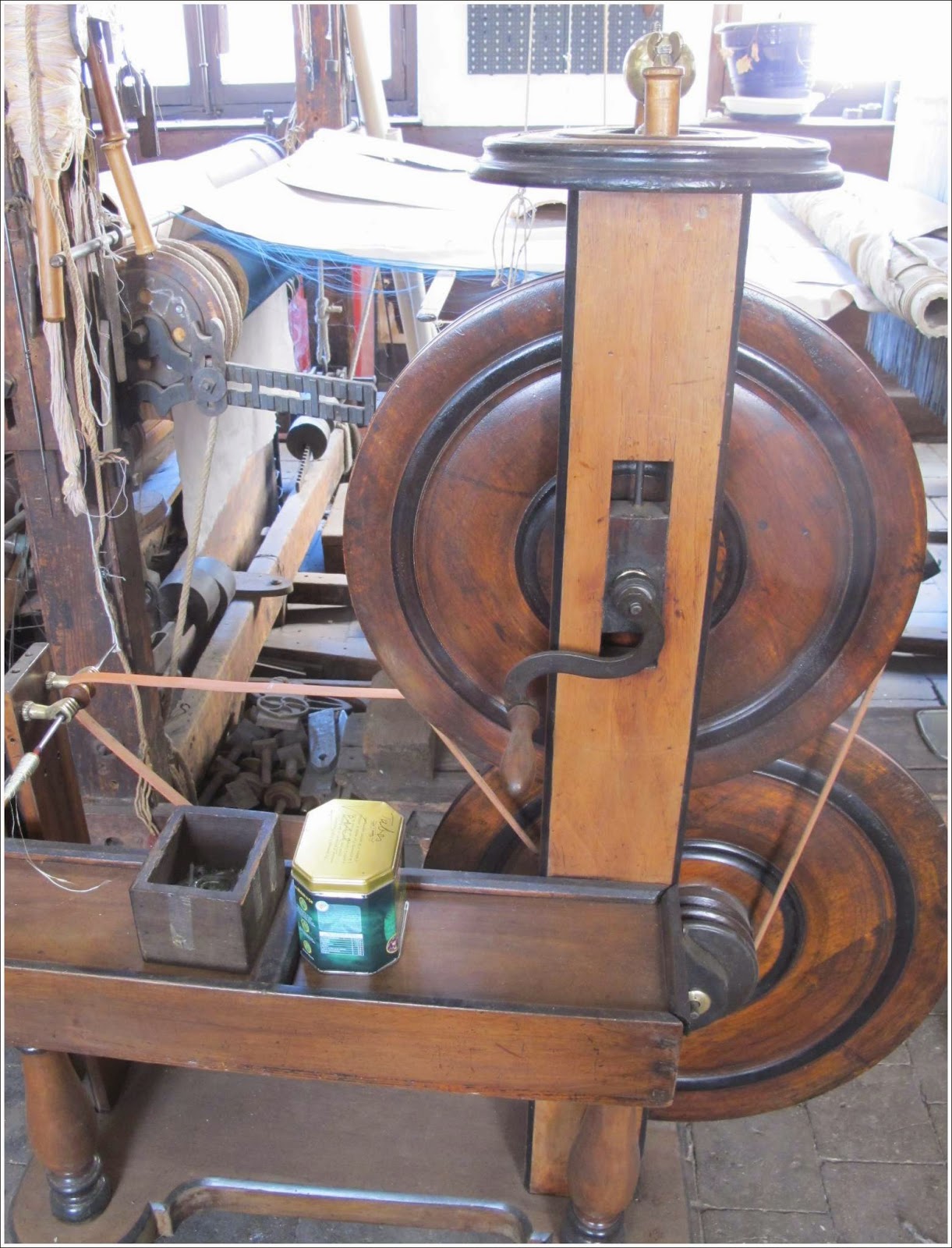 A roll of fabric, spread out on a dusty table. 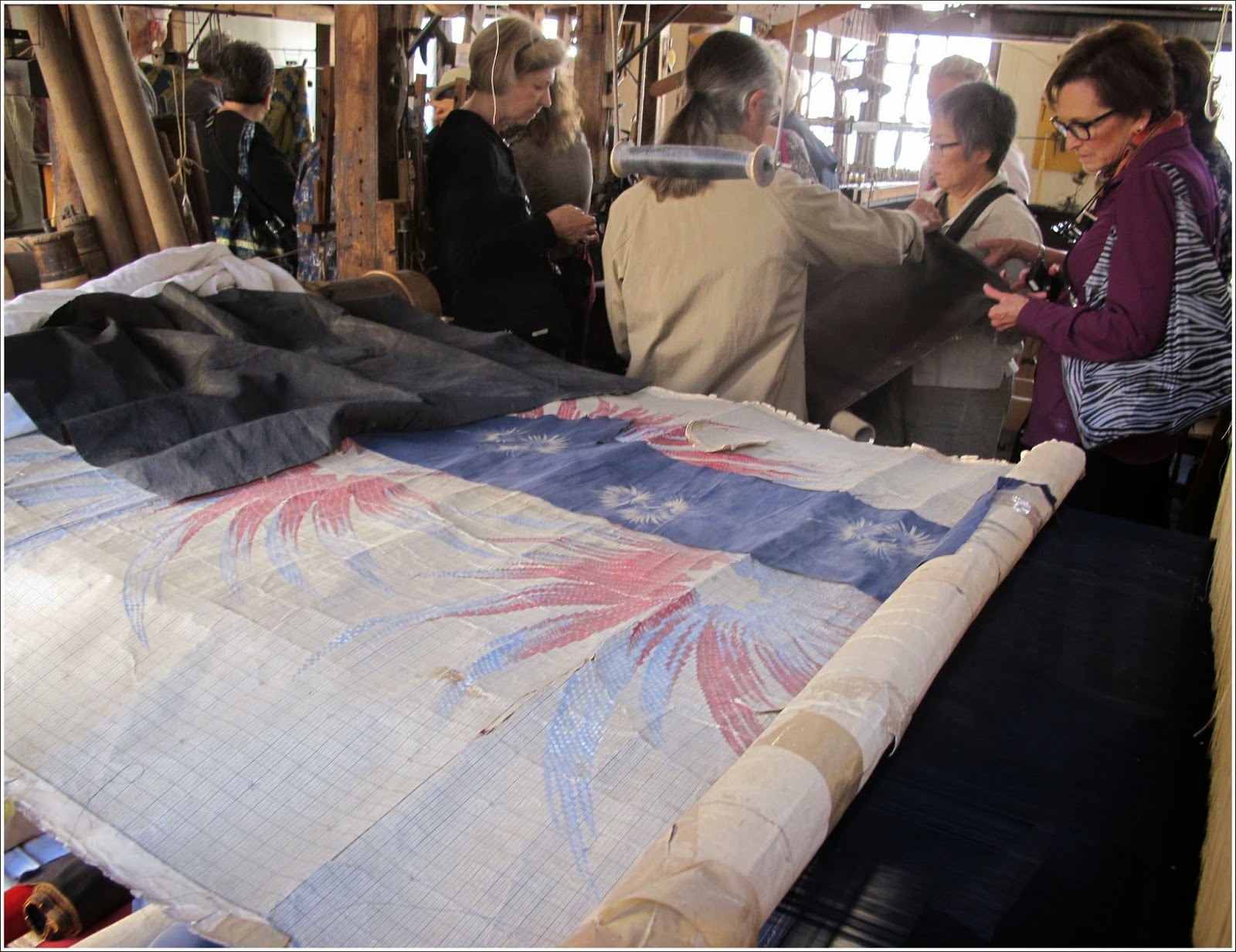 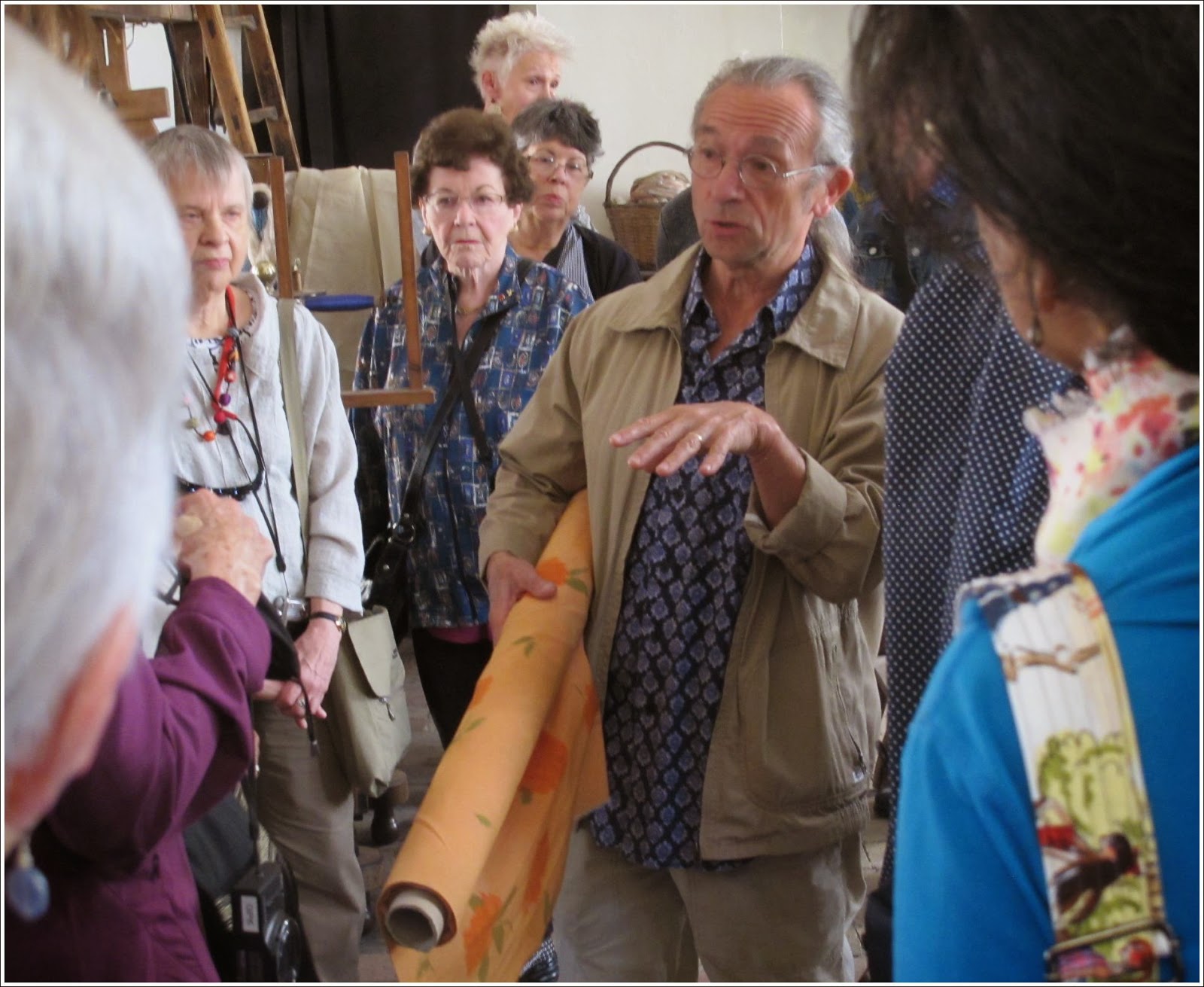 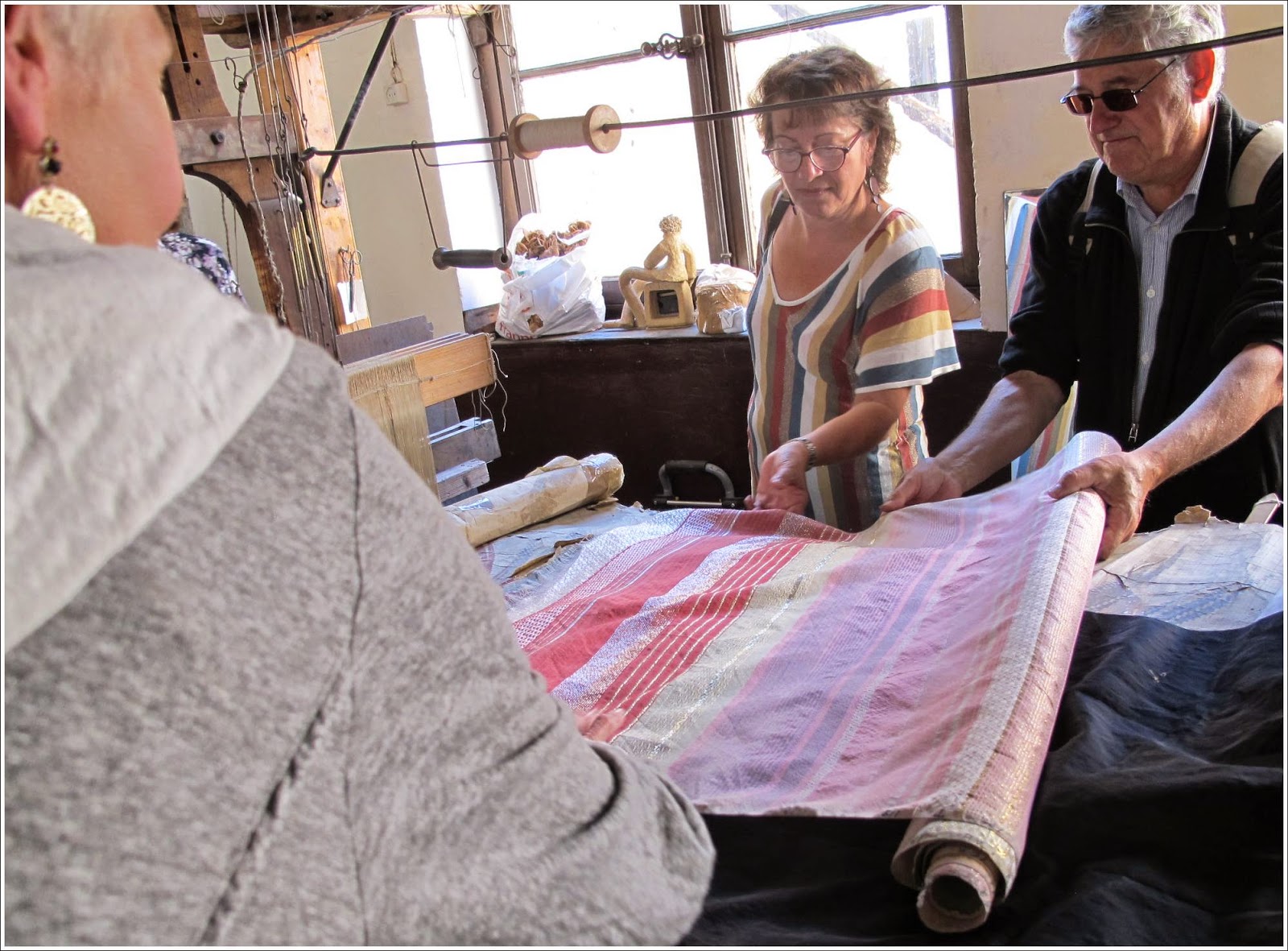 A quilter must touch the fabric! 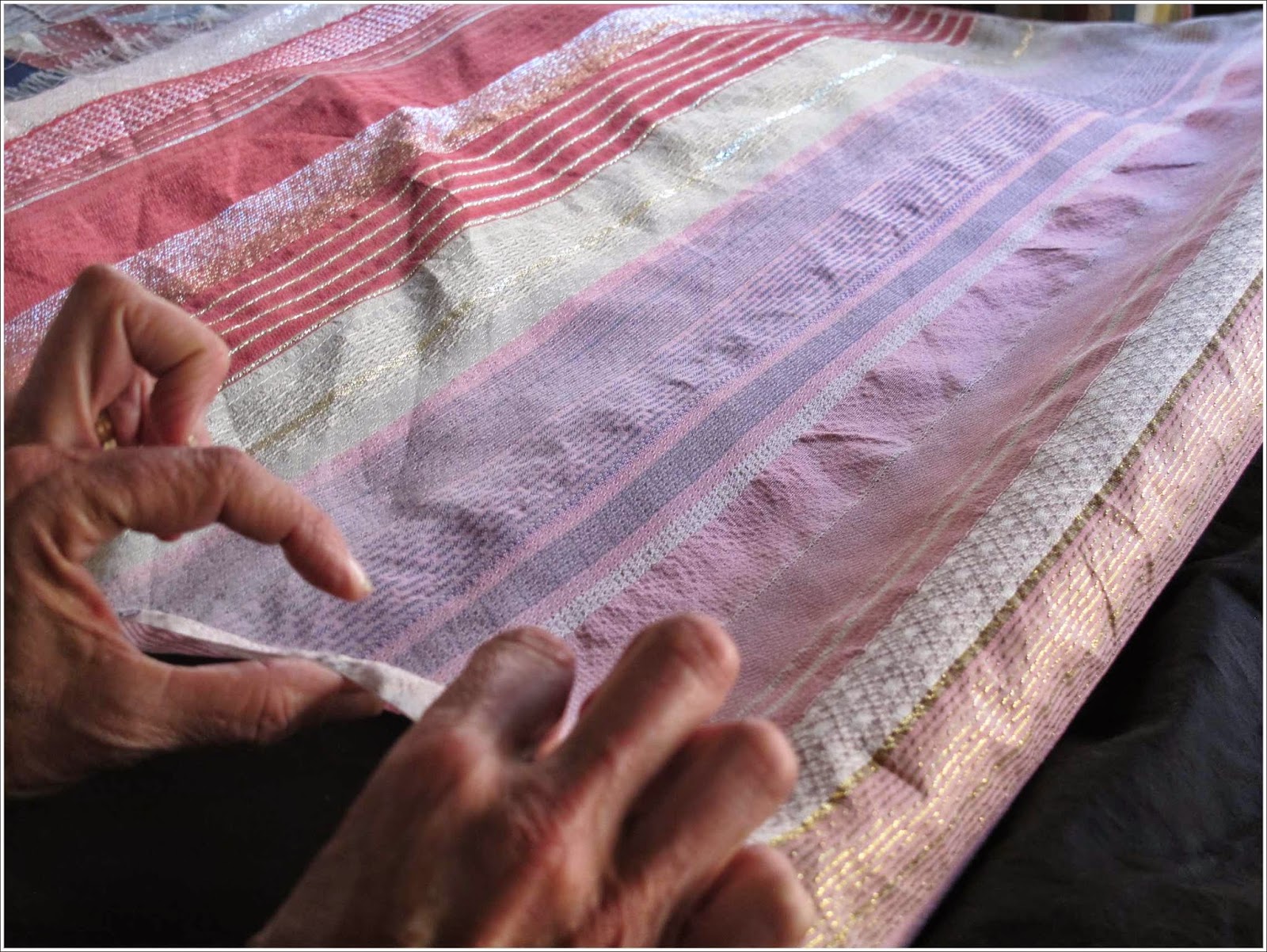 This is a special treasure of M. Mattelon's. He had it hanging from a flagpole on the wall when we met him and he pointed to it proudly. He had made it in secret during WWII, and had flown it out the window when Paris was liberated and French Resistance and Allied troops marched in victory through the streets. 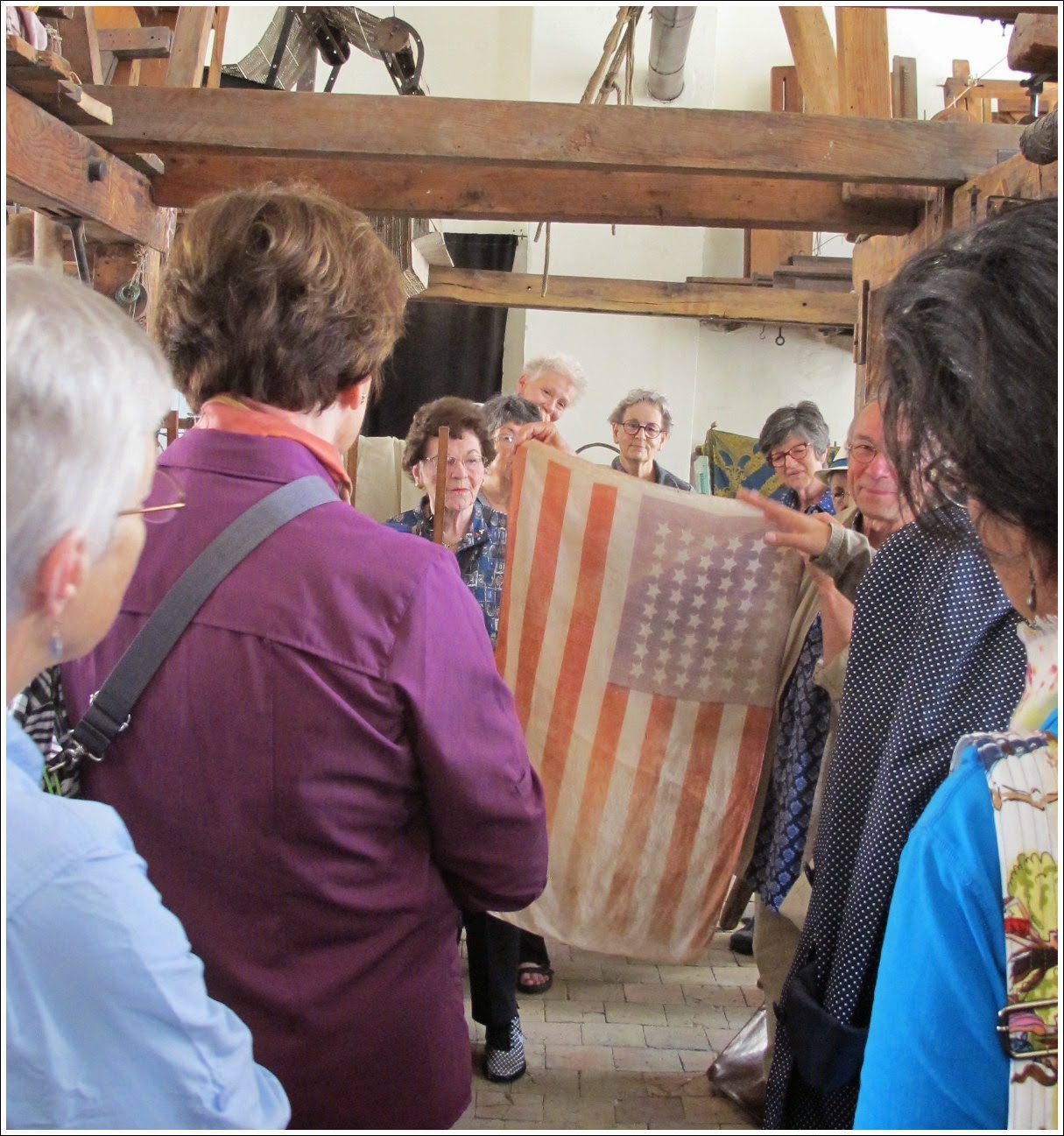 
Then we go to the Soierie Vivante.  It is  the only association which exists to protect Lyon's silk-making heritage. It welcomes the public, operates the protected looms and ensures that ancient techniques and know-how are kept alive.There are guided tours and demonstrations. See the link for information on days and times.

Here is a display of samples of braids and ribbons made in this workshop, 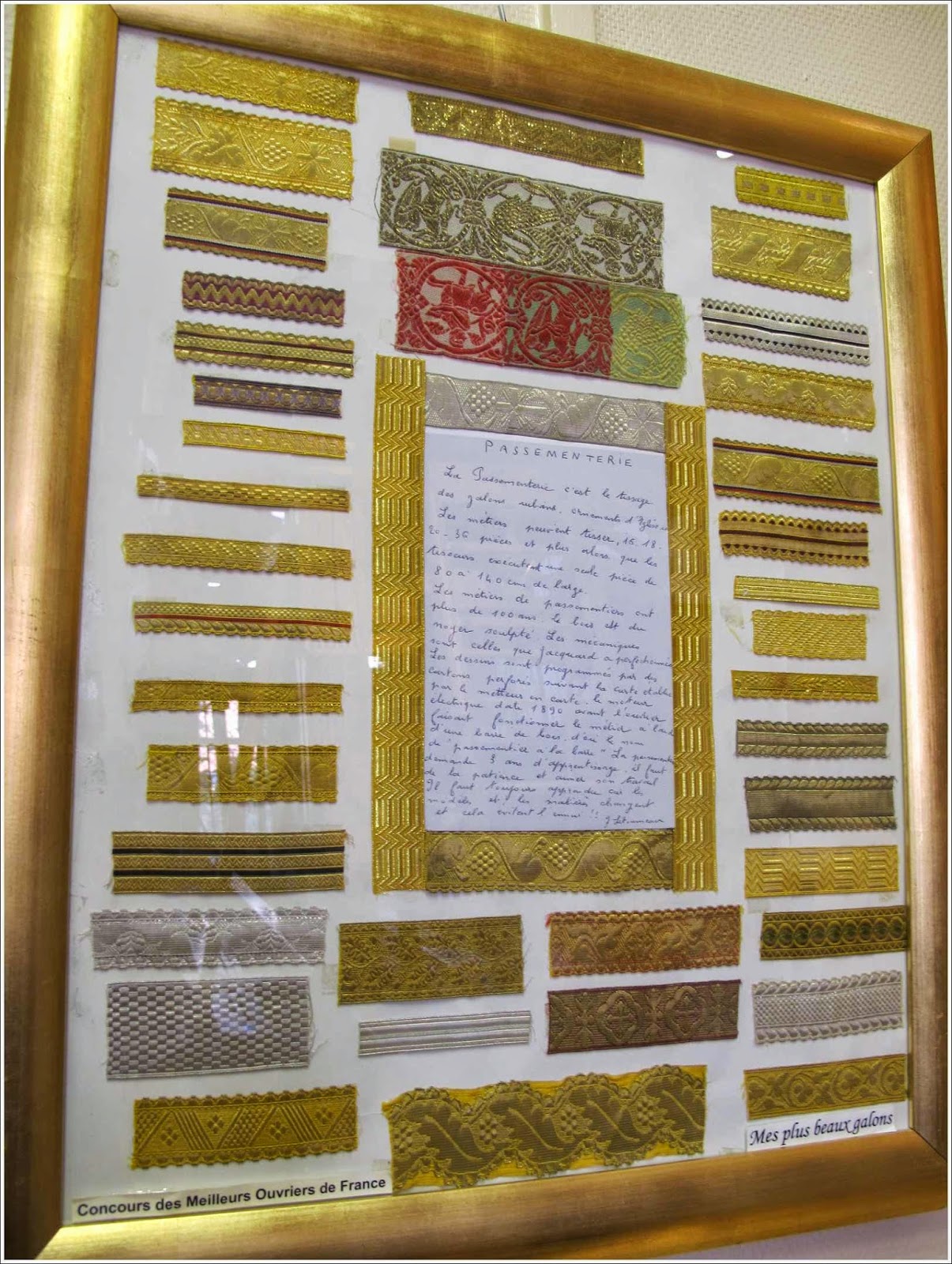 Electricity came to the workshop in the late 19th Century and that revolutionized how the fabric was made. The electric jacquard machine can operate many times faster than a hand weaver can throw the shuttle. The museum docent explains this machine to the group. And then turns it on. 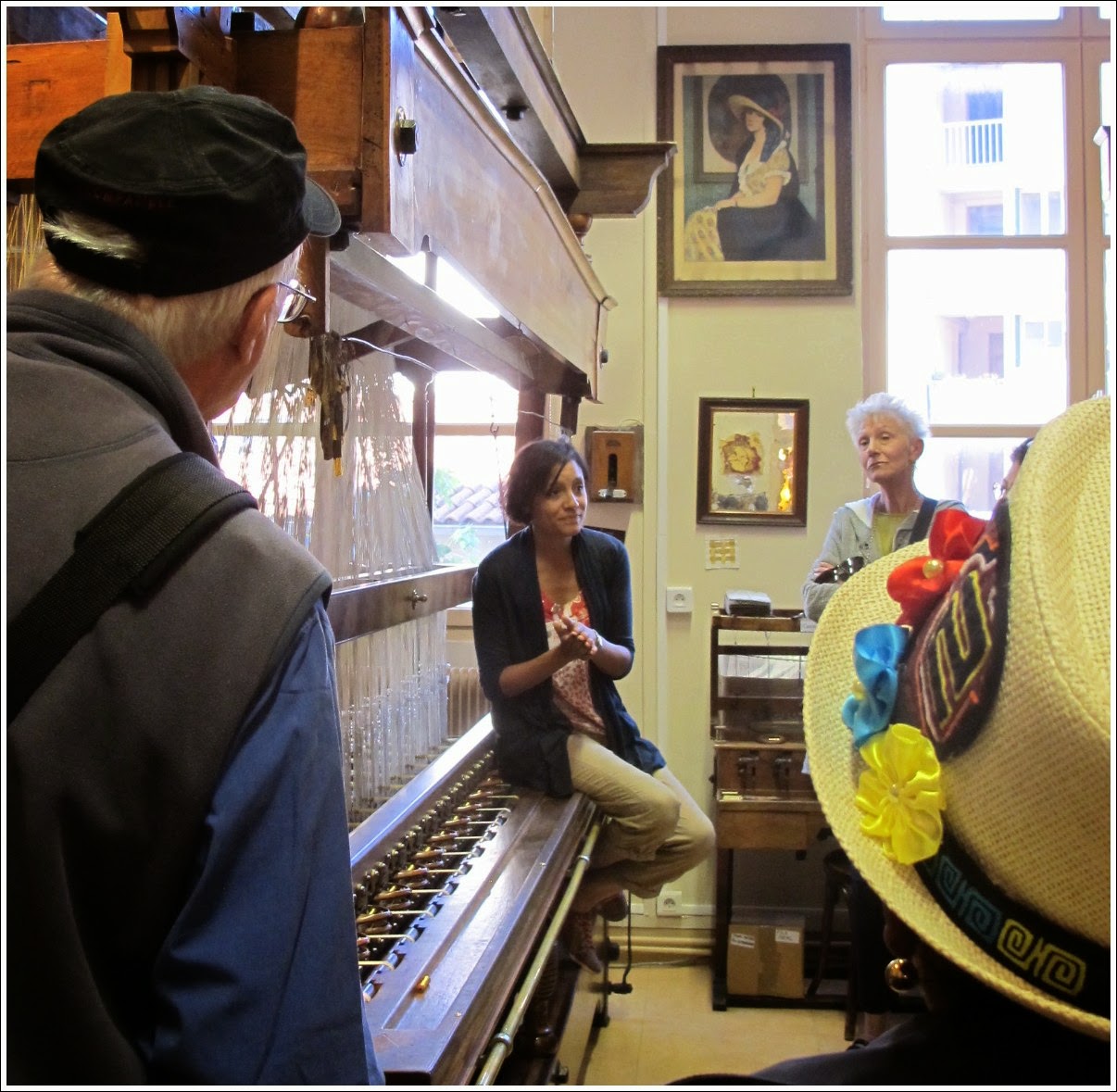 The punch cards of the jacquard machine control the designs to many rolls of braid. 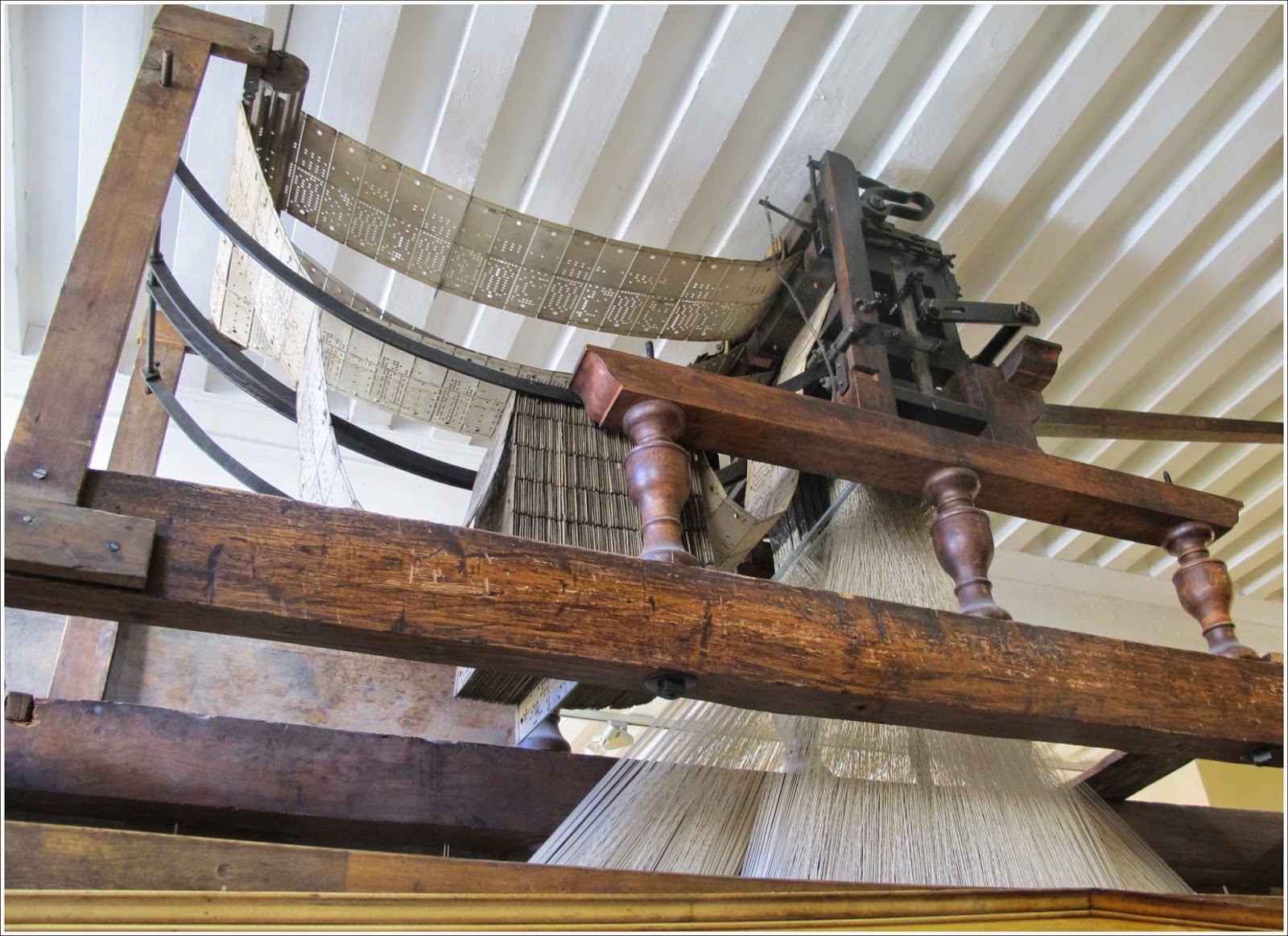 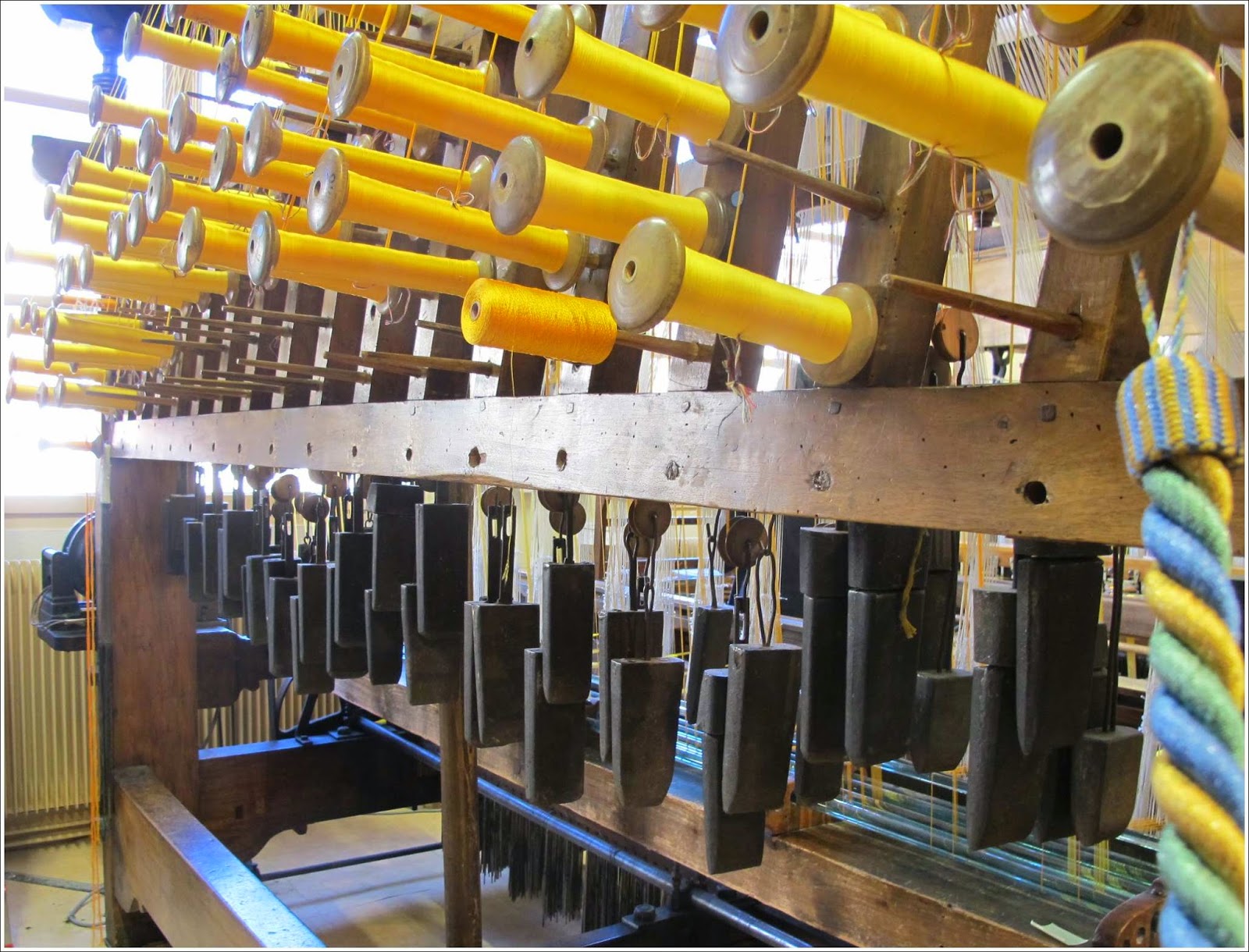 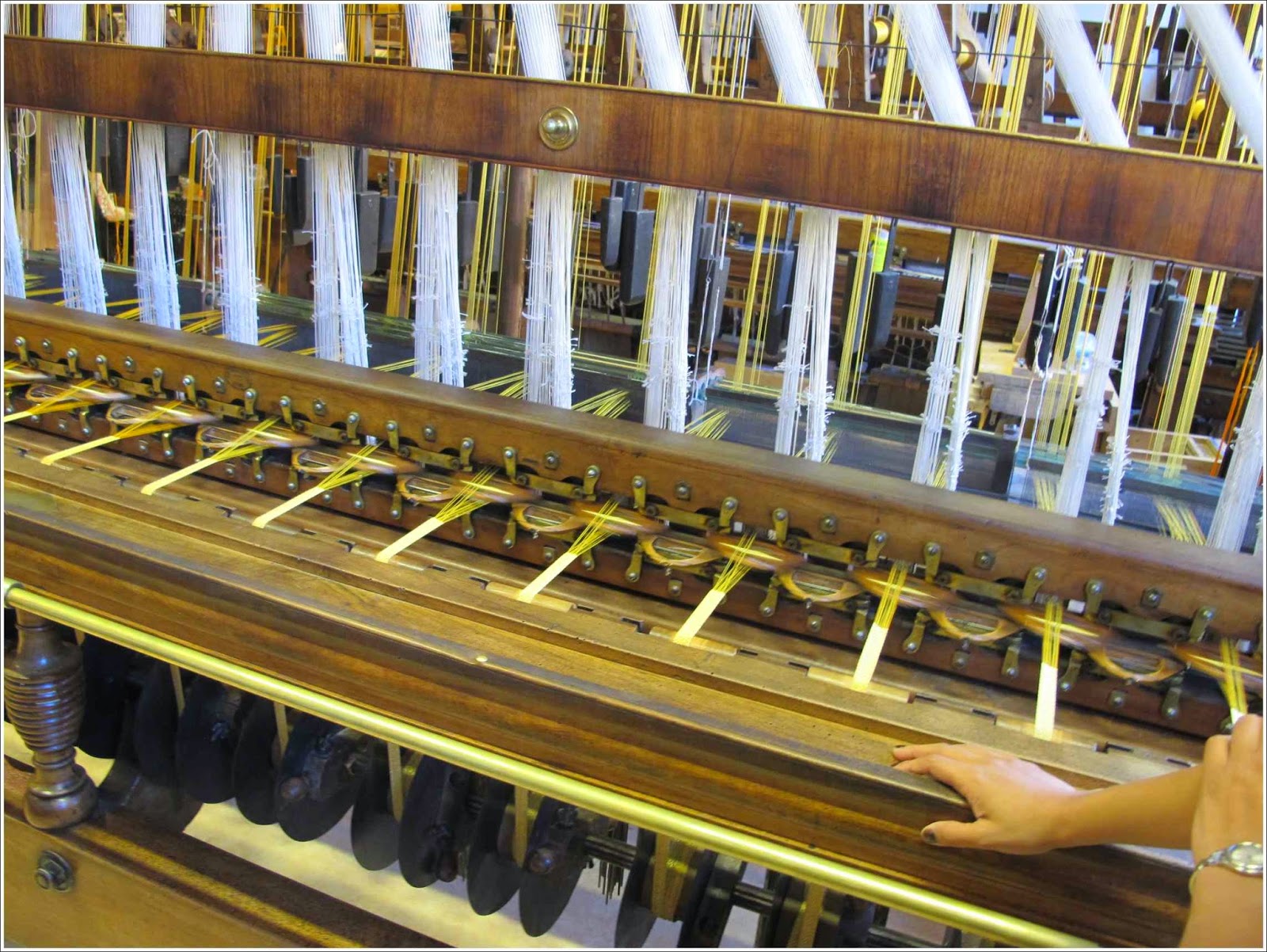 The docent turns on the machine and the clickity-clack speeds on, sounding like the wheels of a trains on a track. You can see the many narrow gold ribbons emerging from the machine. 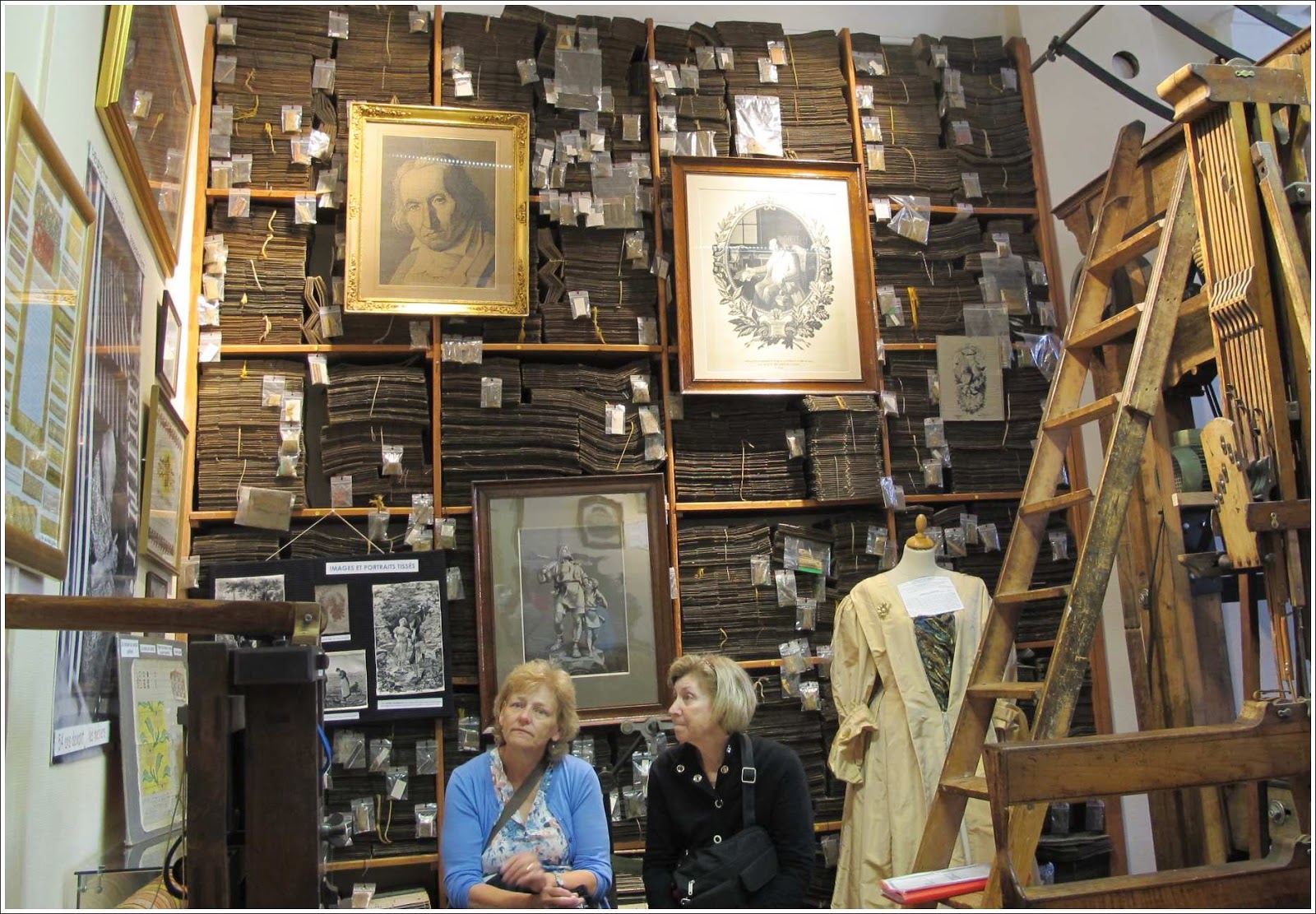 Two of our group take a little rest in front of the tall archives of jacquard patterns and pictures of people with a connection to silk-weaving.

It takes a ladder to get up top to change out the sets of cards and thread them. 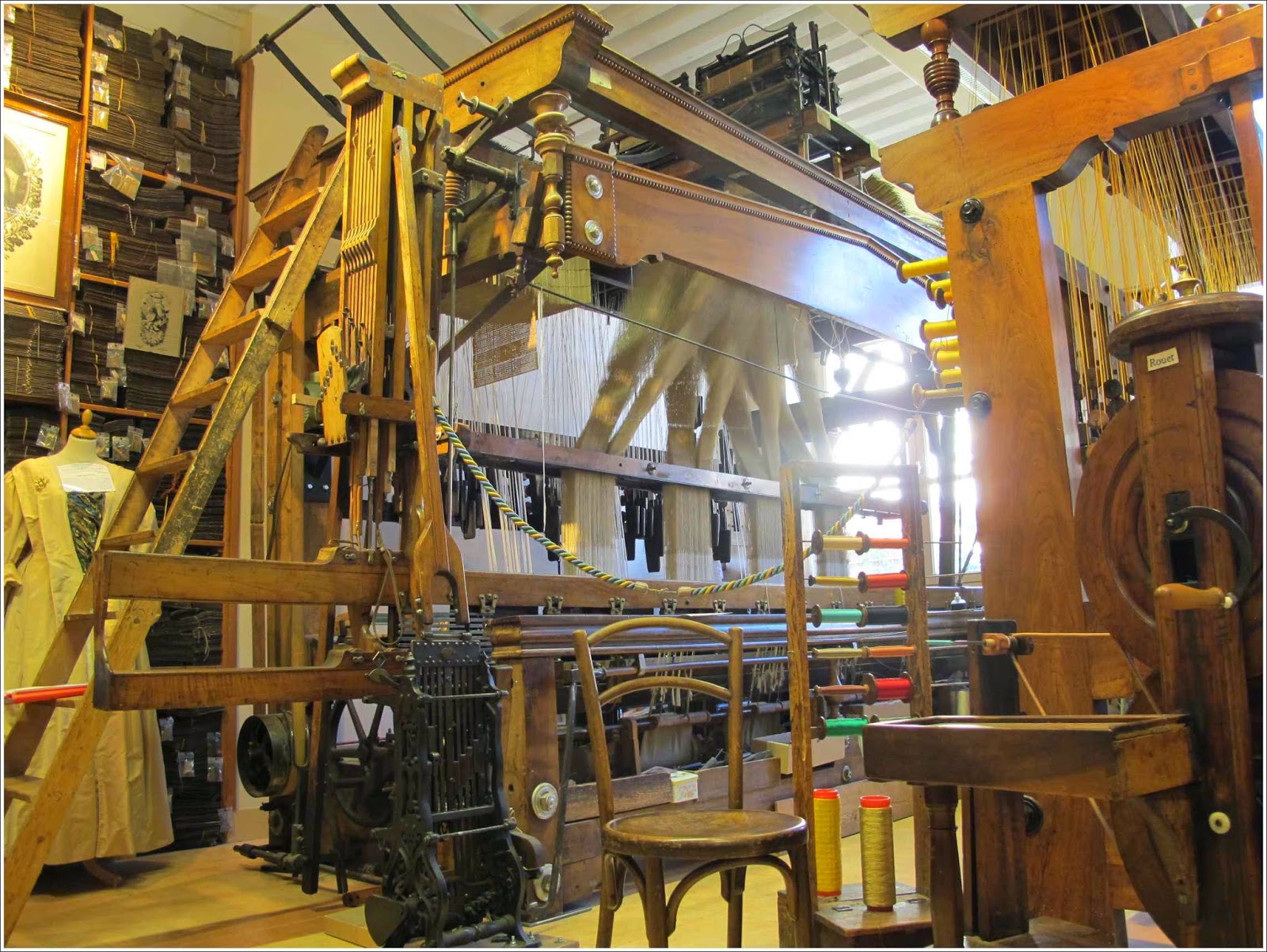 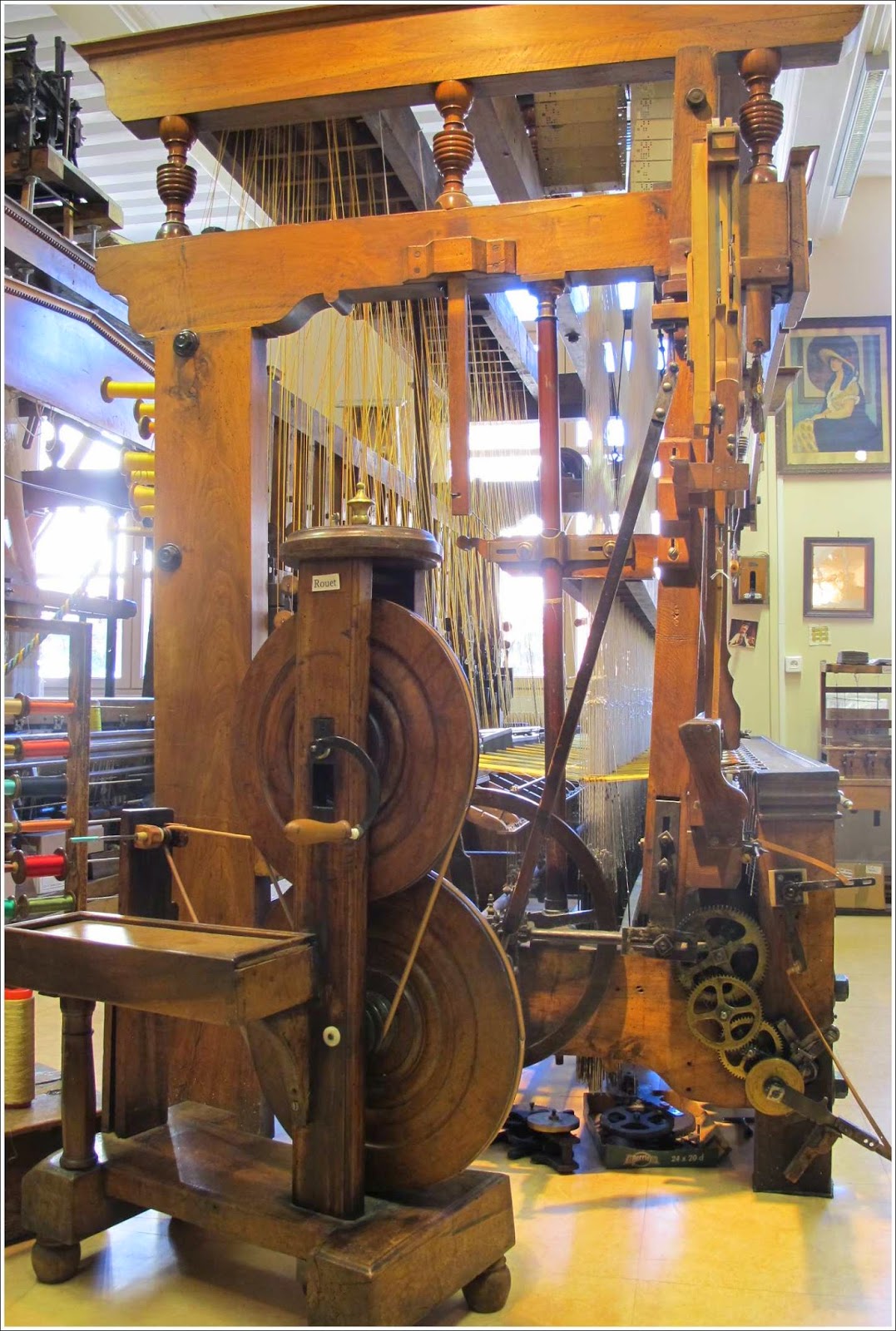 M. Mattelon (1913-2004) was a master weaver who also created the Rue Richan workshop and was awarded the title of Meilleur Ouvrier de France (Best Craftsman of France).

Our group gathers to hear Sandrine describe what we'll do next as we descend the Croix-Rousse plateau through traboules while returning to our hotel or other pursuits. But we'll leave that until later. 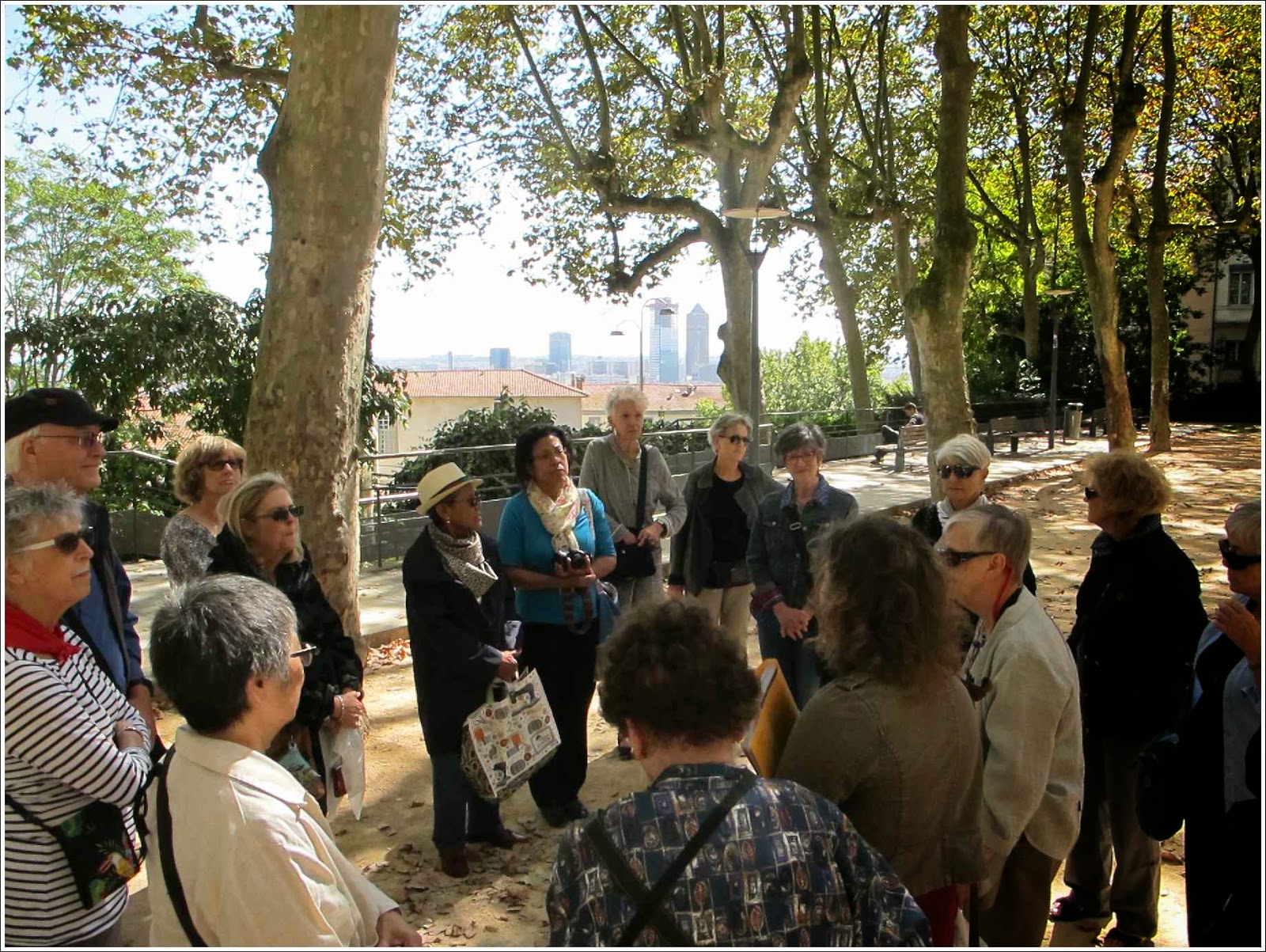 PS: Disclaimer: Don't use this blog as a research source! I don't do research beyond trying to avoid gross inaccuracies, but this is solely my interpretation of what I've read or heard and that's no guarantee.