Two faces of a mountain

I was terrified the first time I went up Mont Ventoux. That was in 2011. The road has a reputation as a steep curvy drive, with long drop-offs. I was not a fan of scary roads. Most people coming to My Little Town for the first time (and often, subsequently) are similarly daunted by the grades on their approach to my home. With experience, I conquered my own scary hill, so Sister and I talked ourselves into making that optional Mont Ventoux visit.

That first drive up was not quite the horror I'd feared. It's a normal mountain drive through the wooded areas at the base, except for the plethora of bicyclists of all stripes pedaling upward. The road is fairly wide and smooth, as are the berms. Let's face it, trees shelter you from views of drop-offs. But the top of Mont Ventoux is just plain naked. I've read that it was denuded by logging activity in support of shipbuilding over several centuries, not a natural phenomenon such as being above the timberline. Neither is it snow-capped year around! The view from the top is unobstructed, a long slope that looks on the one hand so gentle, so wide, so seemingly protective against falling off the roadway. On the other hand, if you perchance started rolling on the crumbled limestone incline, not much would stop you.

Always, you hope for a clear day where you can see the countryside forever. After all, you can see the mountain from everywhere in the countryside, its peak often clad in clouds. That first-time view and views on subsequent visits never quite reached the hoped-for clarity. It's generally been cool up there, made even chillier by brisk winds that require a windbreaker, but we discovered it's great photo-hunting for the surprising variety of tiny flowers that eke out life in that austere environment.

There's a gift shop and crowds big or small, a myriad of events for bicycles (most noted, the Tour de France), motorcycles, sports cars, that include summiting or crossing over Mont Ventoux. The summit is 1912 meters (6273 feet) and winds there exceed 56+ miles per hour 240 days a year.

But this day, this year late in June in the first session of the lavender tour, is almost balmy on Mont Ventoux. It's almost clear.

I'm in Beth's car. She knows of a stop with good  toilettes. That particular facility at the summit is not good. She turns off on a side road and drives past ski resorts and shops. Very resort-y. We see Lisa's car follow us initially, then turn around to go back to the main road. They've assumed Beth has made an error. Sister and Brother-in-Law's Morgan doesn't follow, nor does G's car.

A table in the sun, hot and cold beverages, a snack, a clean, comfortable restroom, way more reminiscent of the cozy old mountain resorts. We linger. 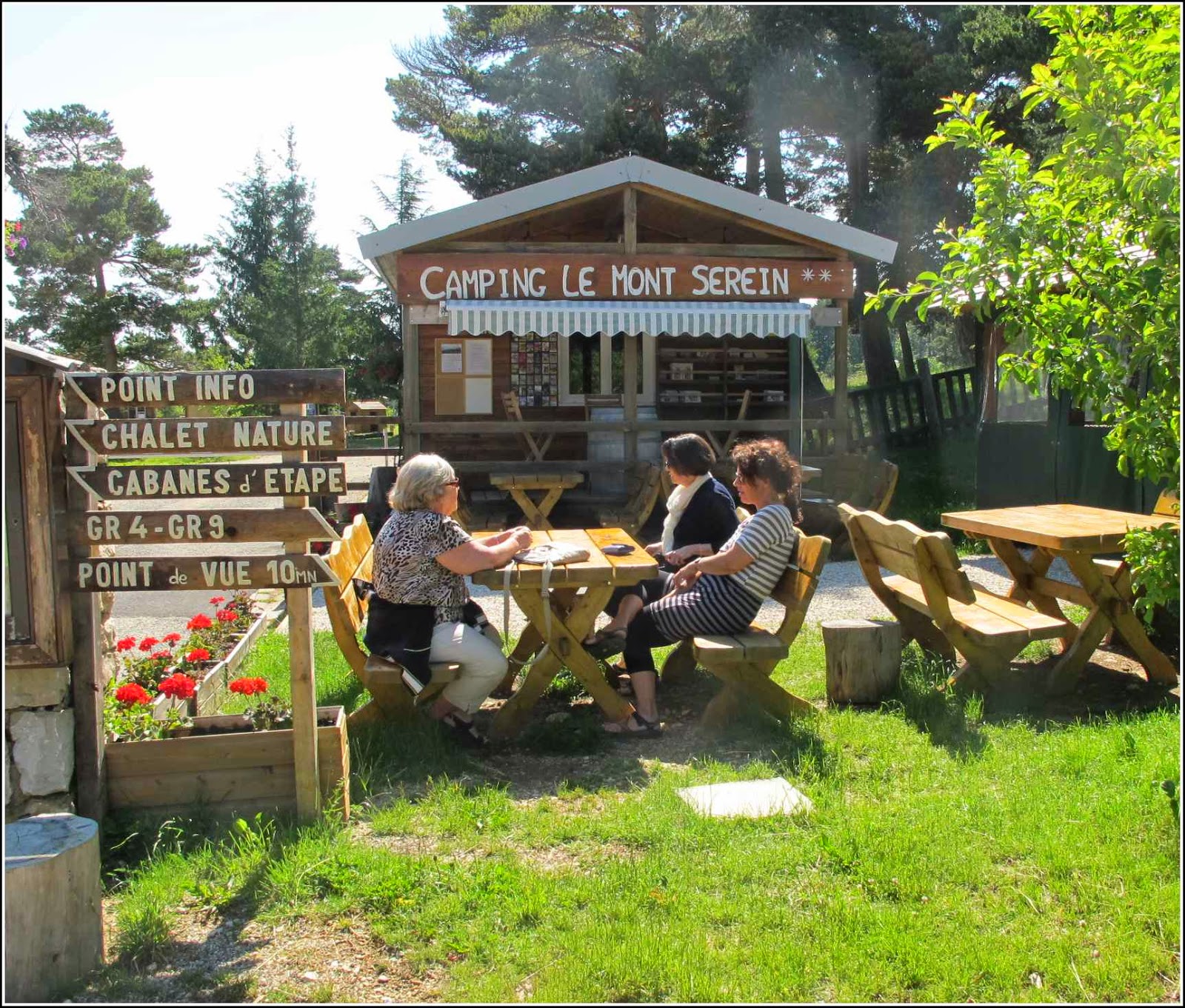 By the time we get to the top, our other cars are almost ready to leave. I want to linger at the top, too, for a bit. The crowds at the elevation marker rule out the traditional photo there, but I want to look for some flowers to photograph. For the first time ever I take off my jacket at the summit. 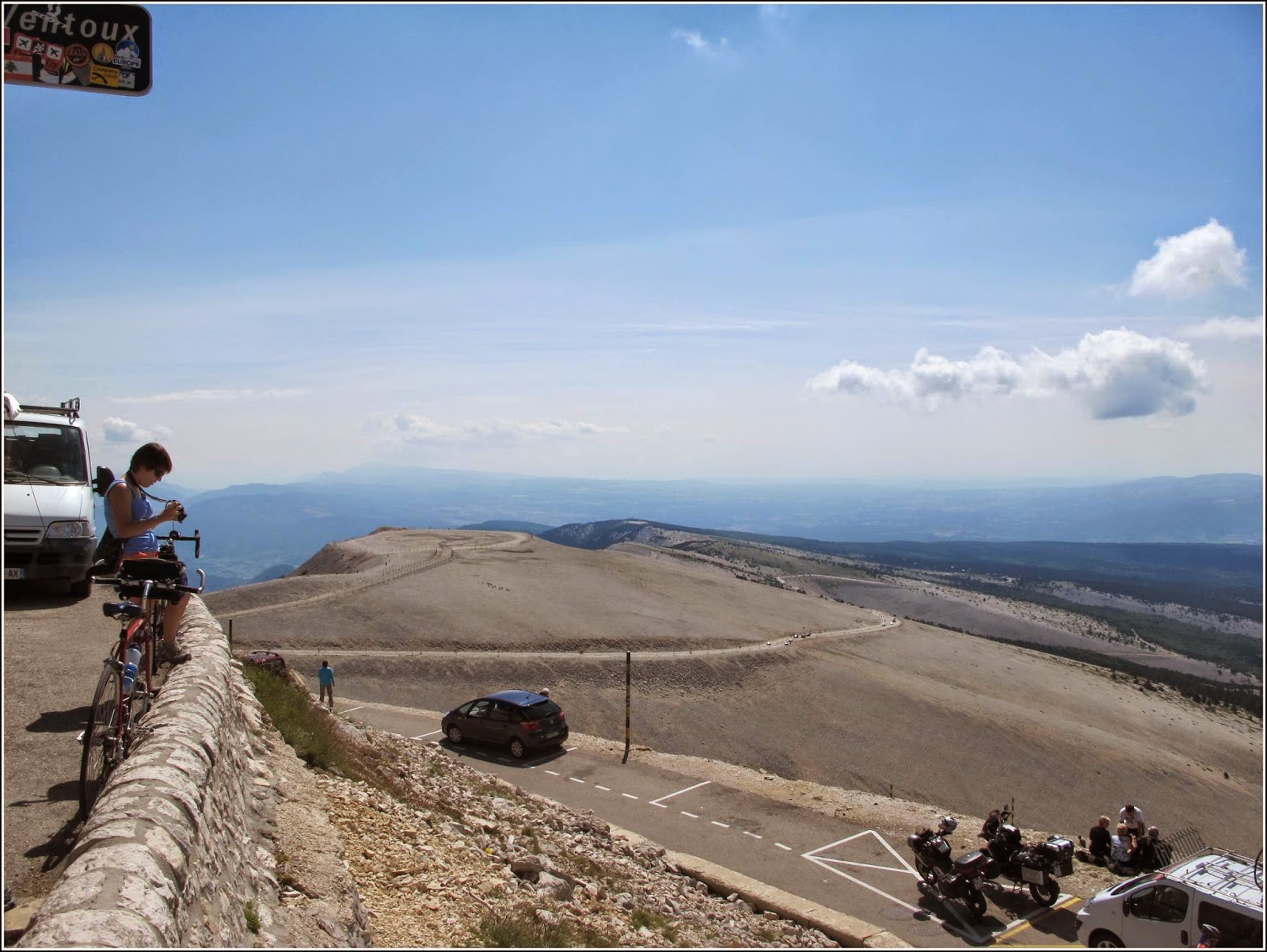 This guy on his recumbent bike was really huffing and puffing. This might be nice mode of transport on level terrain, but can any of you cyclists tell me how well this works going up something like an 8%+ grade? 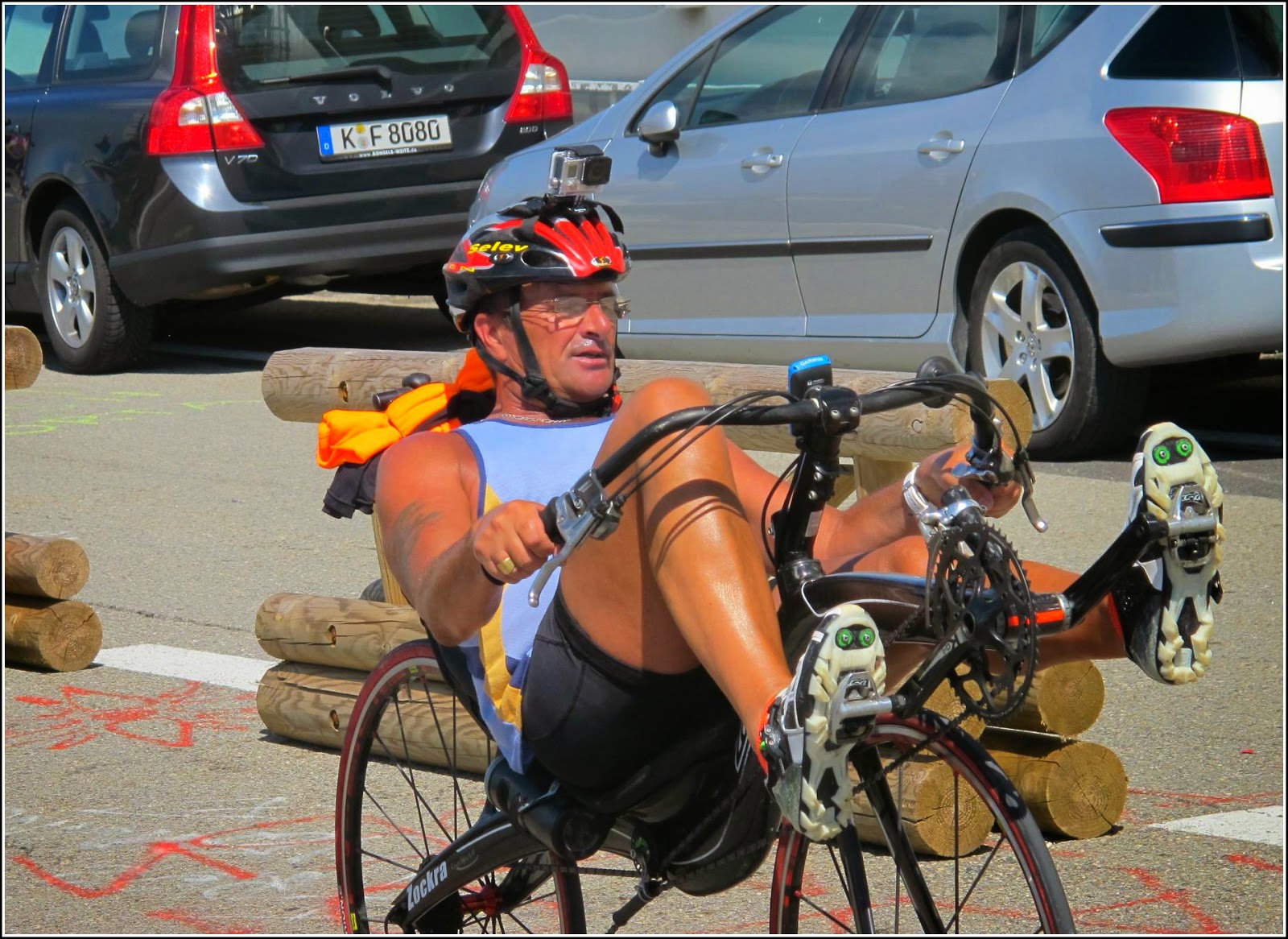 Stage 15 of the 2013 Tour de France ended on Mont Ventoux. This is a publicity photo for le 2013 Tour, not actual photos from that race.


Perhaps you'll recognize some of this road from the TV coverage of the Tour de France last year? 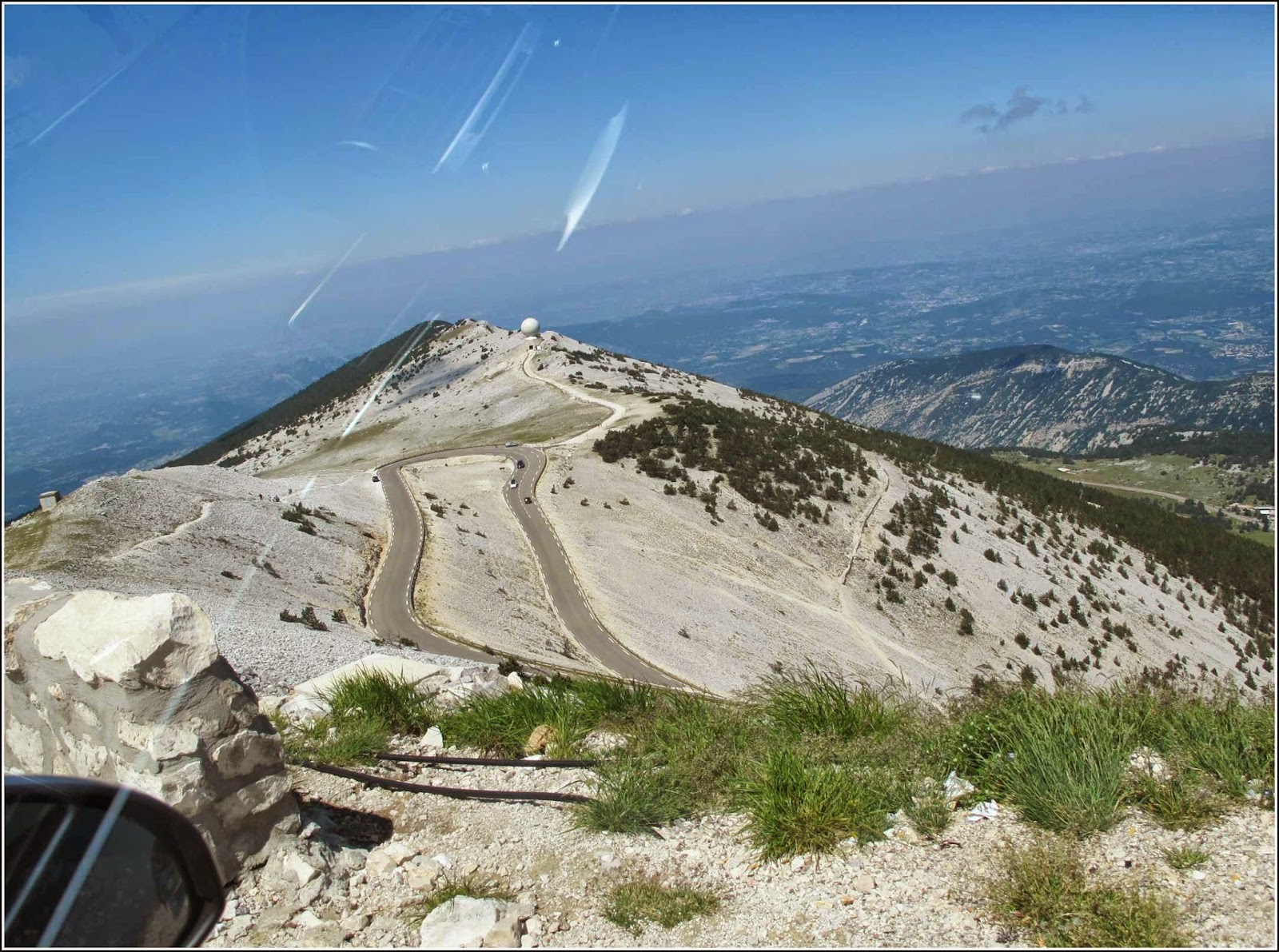 It's almost clear enough to see forever, the gentle face of Mont Ventoux. 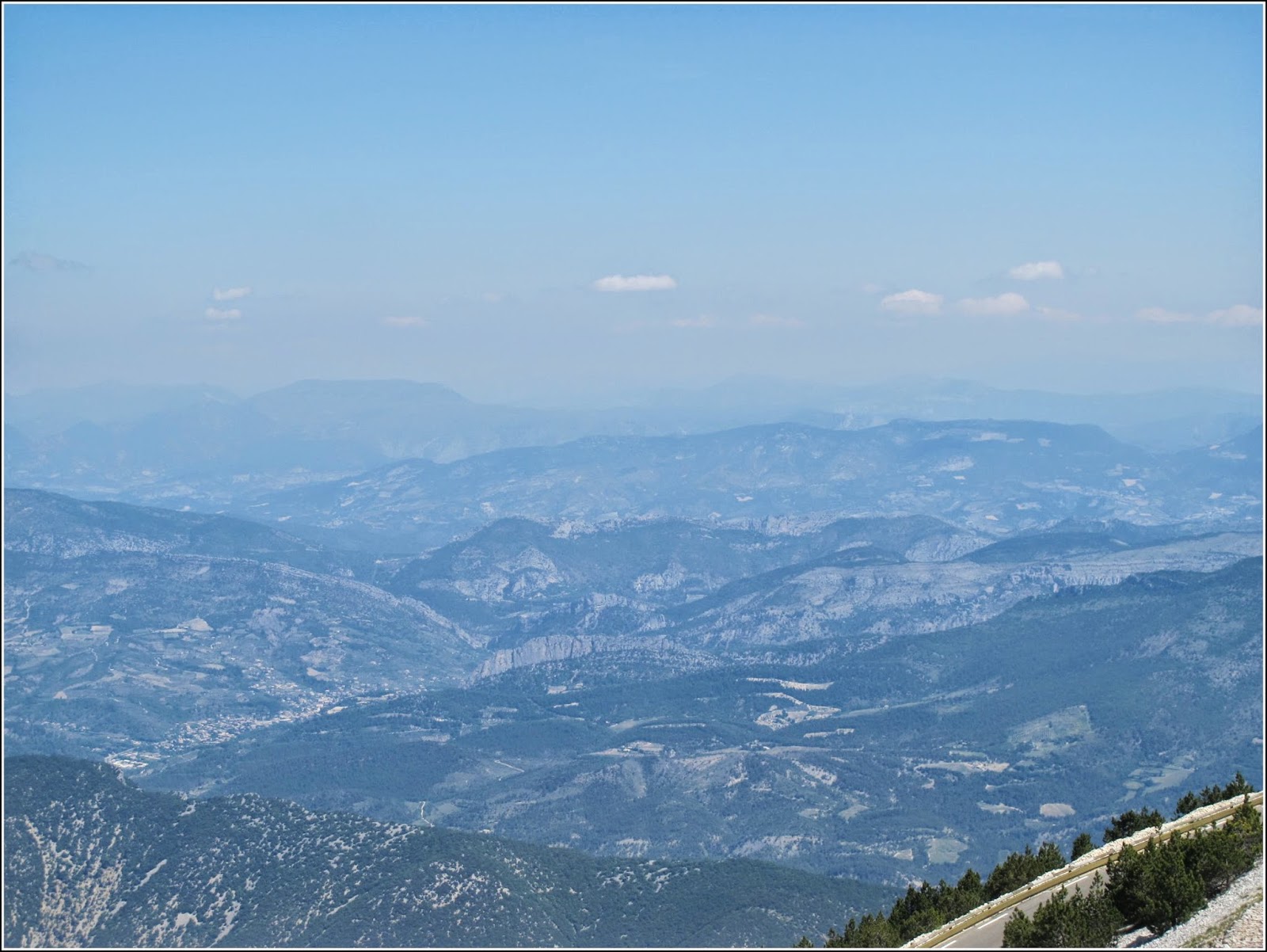 Sister and Brother-in Law had left the lavender tour after the first session to go to a sports car event in Le Mans at the speedway, as did all the other participants. The second session with its new group of participants heads up Mont Ventoux in almost mid-July, two days after my faceplant. We've had periodic rainstorms during the past week, and have been assured a mistral would follow and the rain would be over. Winds had been blowing. But "Is this a mistral or isn't it?" we wondered as rainstorms continued to blow through. Down below, where we live, there are blue skies and occasional big billowy clouds. Amanda has replaced G as the third driver for the second session and I'm riding in her car.

She has driven up Mont Ventoux before, but she is acutely uncomfortable with heights.

The beginning of the road from Malaucène looks much as usual. We've briefed all three drivers about the stopping place at Camping le Mont Serein and I point out the turnoff to Amanda. We pile out of the cars and head to the outdoor table for beverages. It doesn't take much longer for us to go back to the cars for jackets, and then move our imbibing inside the tiny dining room, along with people who were still breakfasting. Hmmm. Is this a clue to the day? 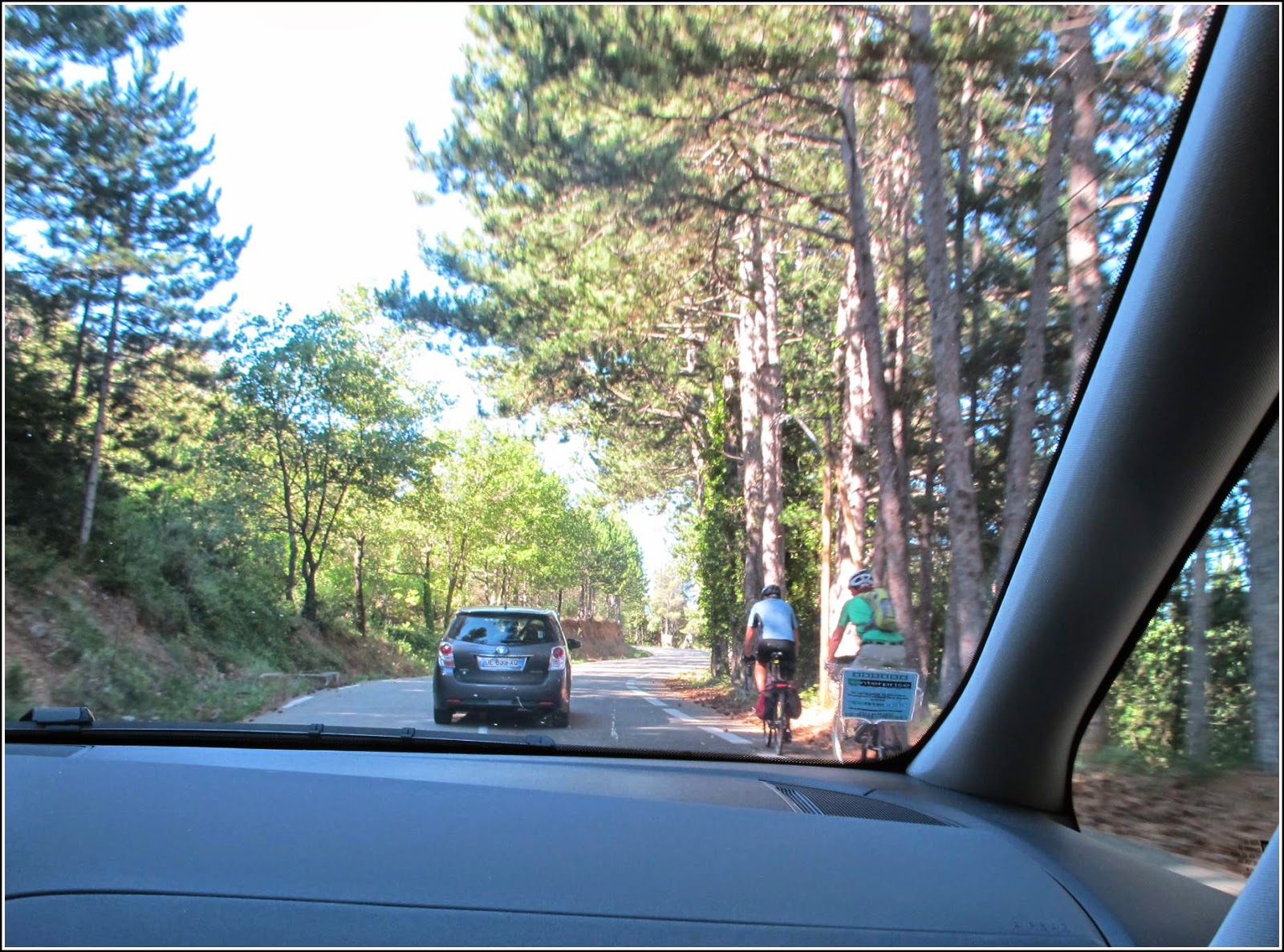 Yes, a clue as we climb up into the fog that whips by us at mountain's edge. See the grasses, practically laid over by the wind? 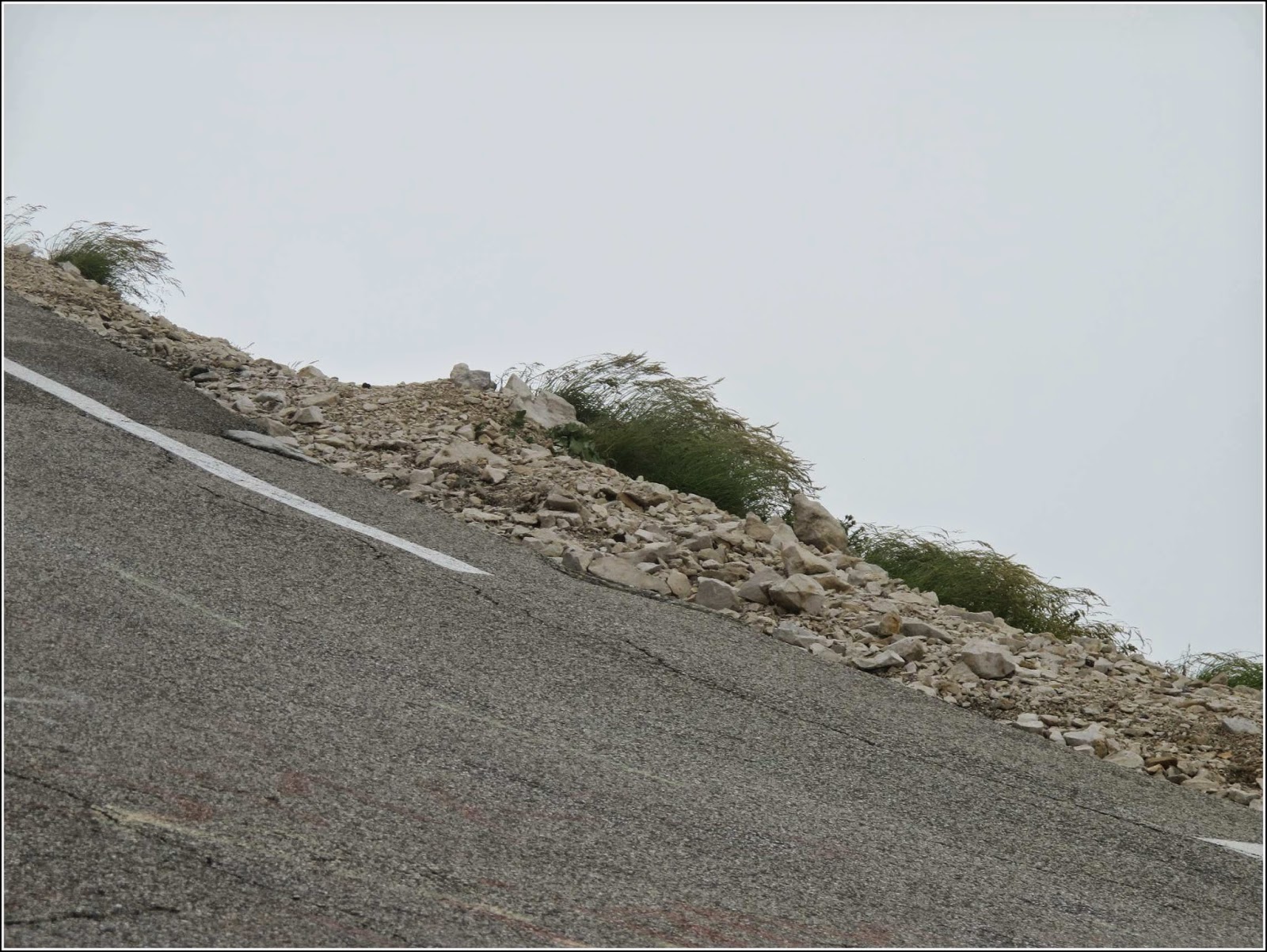 Here's the view without the road in the foreground. 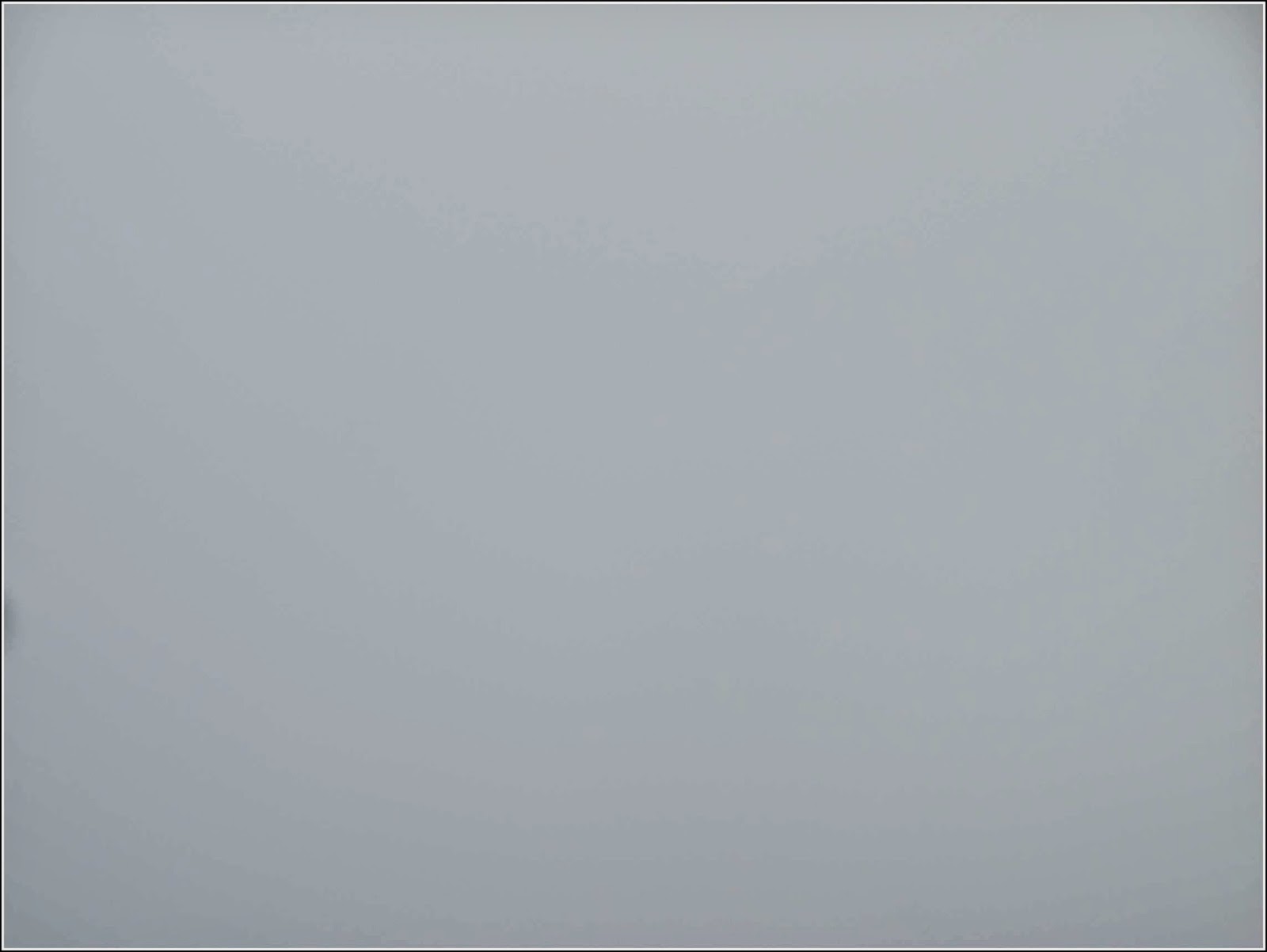 Amanda is white-knuckling the steering wheel. I keep reminding her to keep her eyes on the rear wheels of the car ahead, so she won't be tempted to look down. At the summit we score parking places.

I want to feel the wind. I'm striking terror in my fellow passengers at that thought. Someone hops out to help me control the door which the wind is going to whip away from me as soon as I open it. The car is between me and the wind, but I inch around, holding onto the car. Blue skies show through between tumbling clouds racing by the mountain. 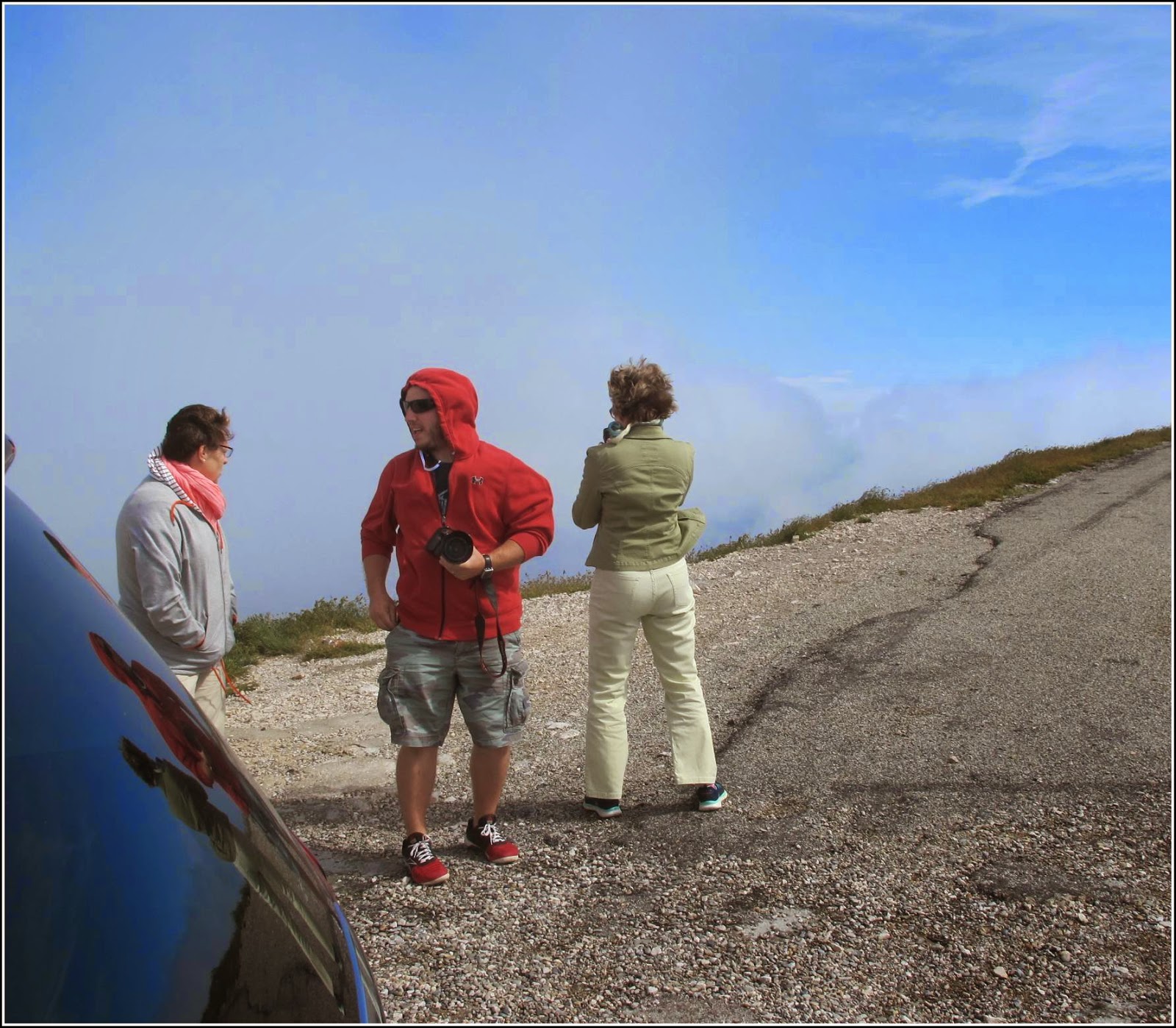 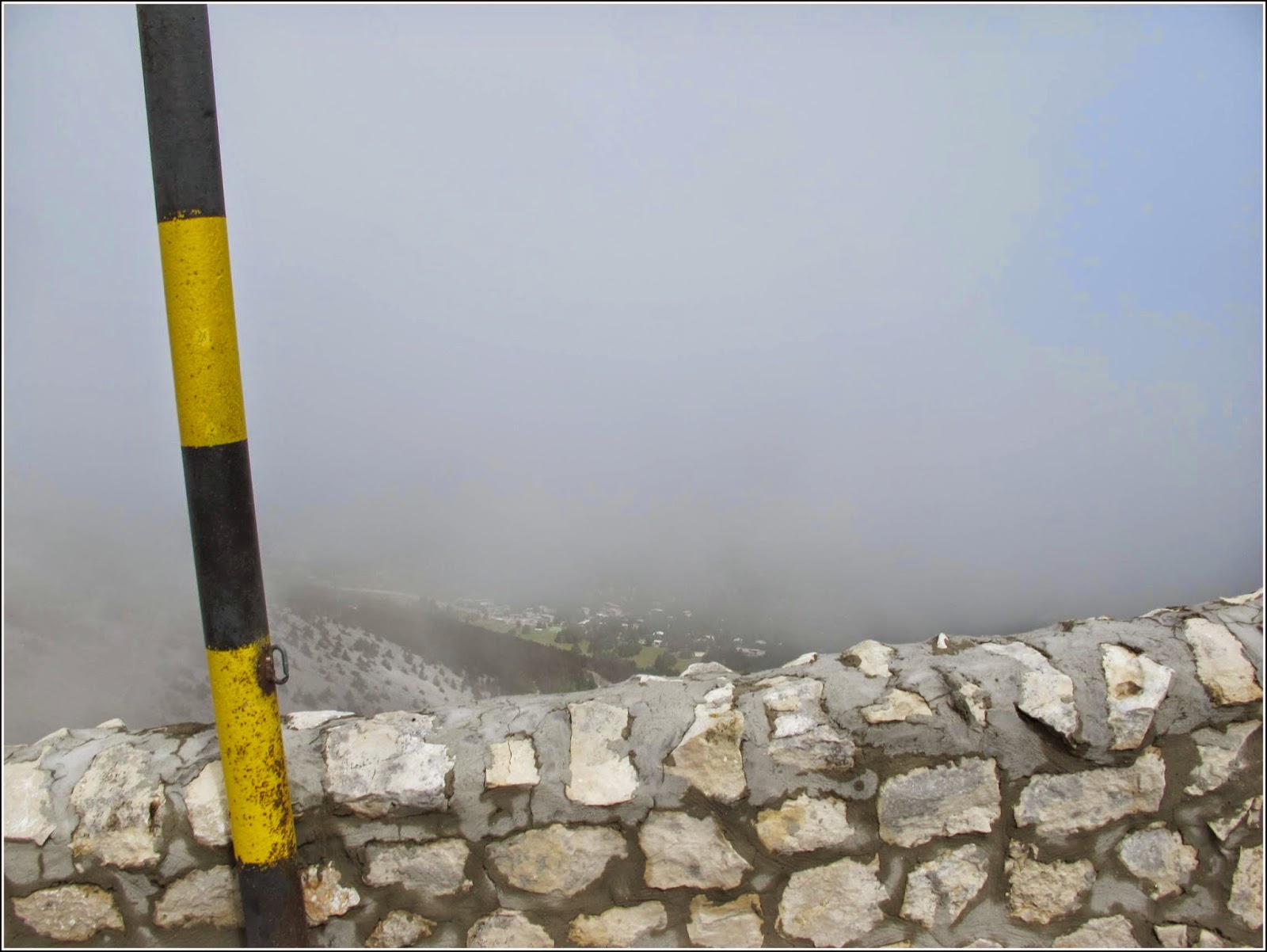 The guys brace against the wind and take photos off the edge. I don't dare move away from the car. I cannot forget getting blown away once when I was a little kid. 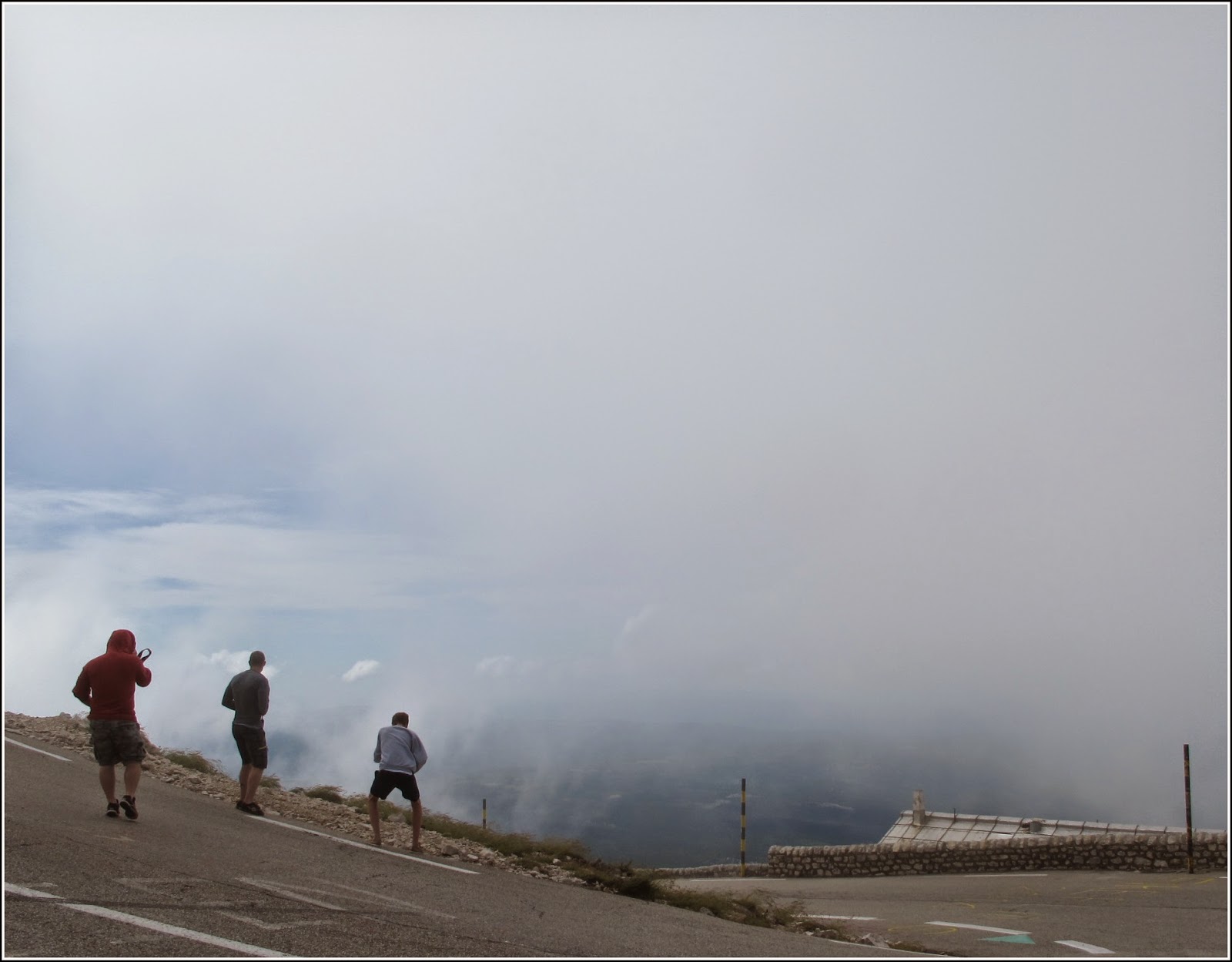 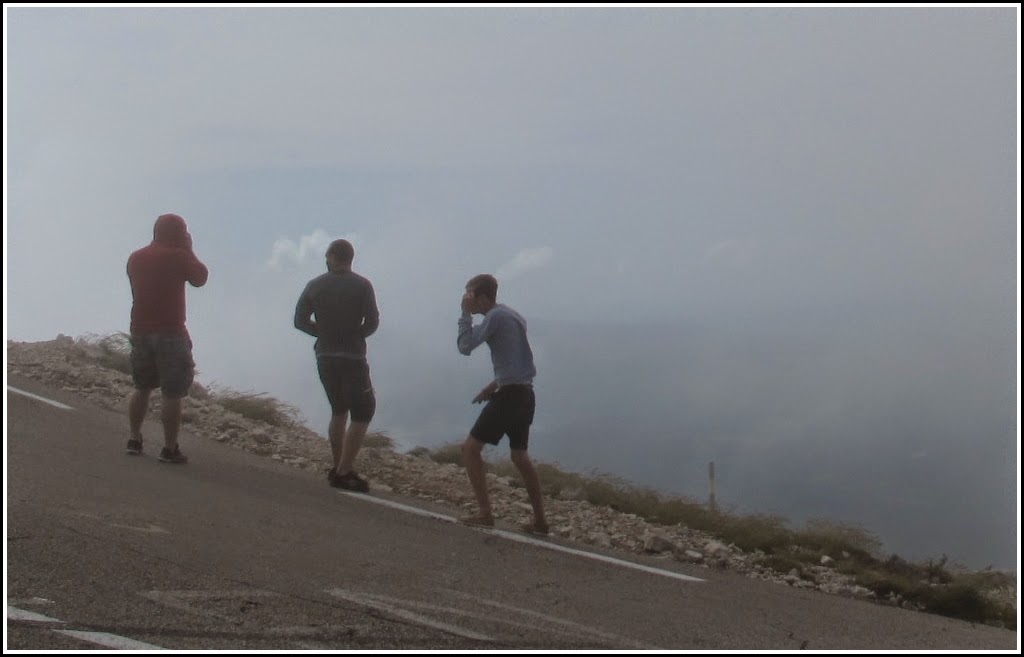 We're heading farther east to the lavender fields in Sault, after which we have a luncheon date at a friend's house so we need to hit the road. We are heading down the road to Bédoin which will branch off to Sault with Amanda resolutely keeping her eyes on the road. 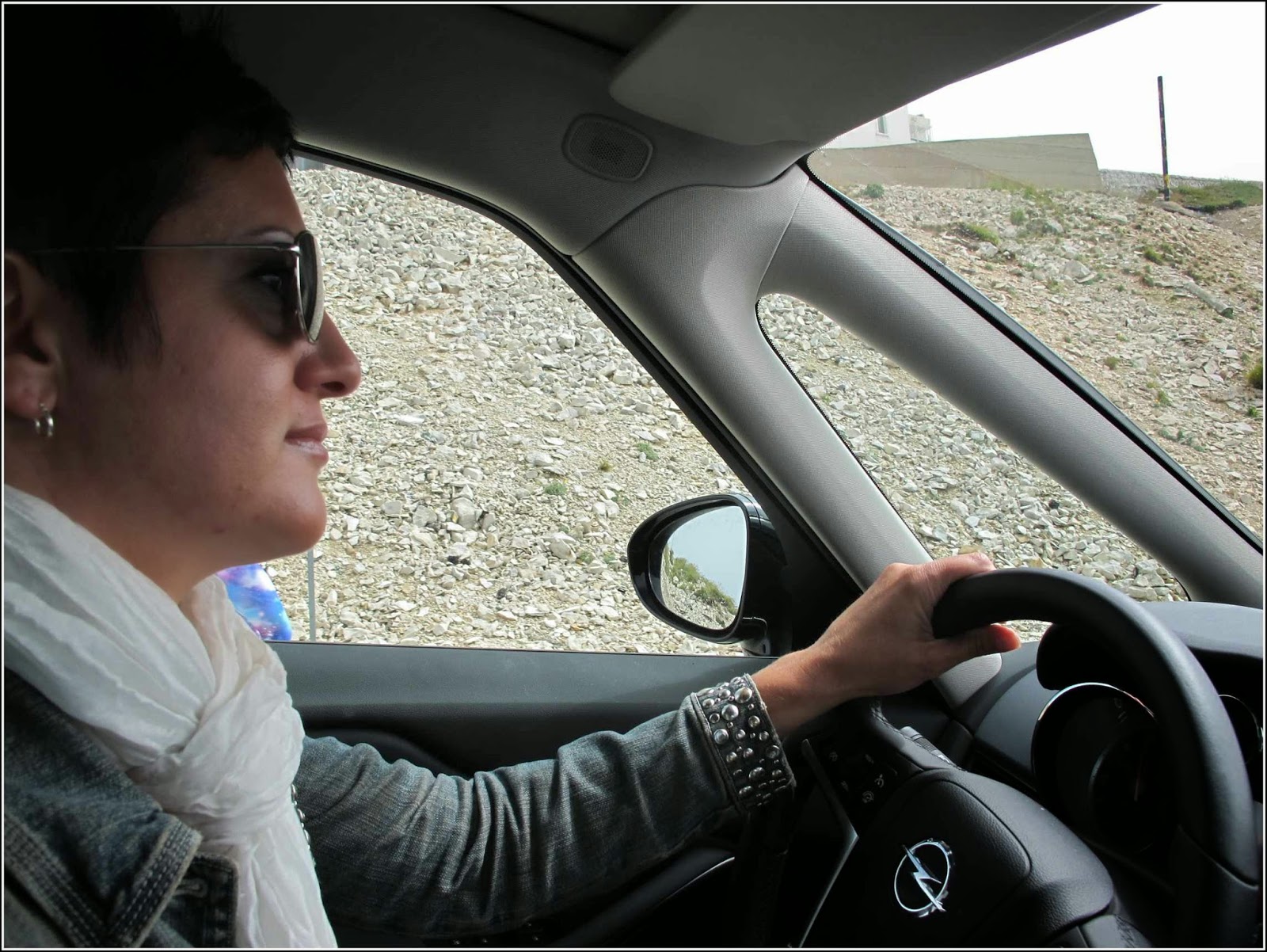 This is probably the scariest part of the road if heights are not your friend. 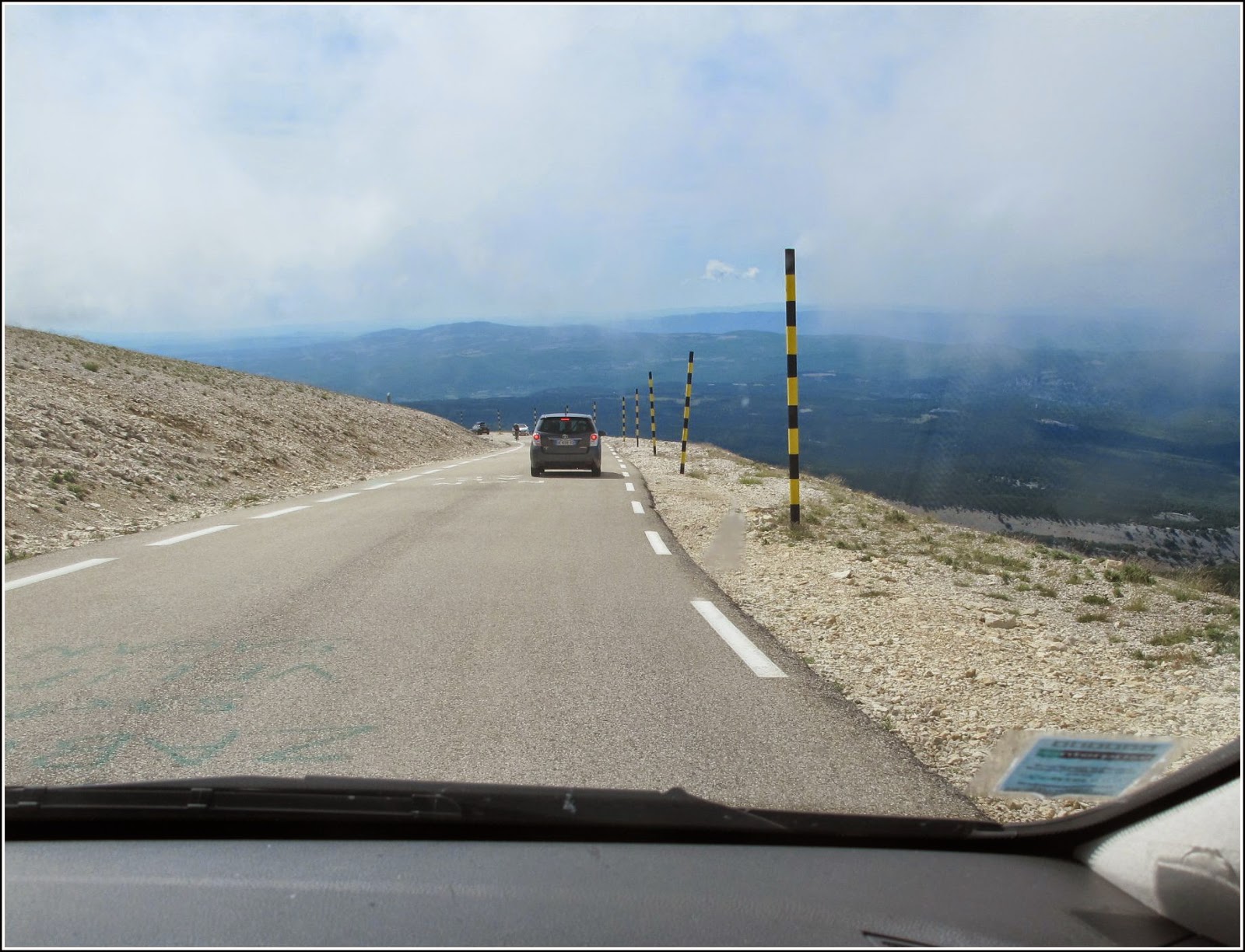 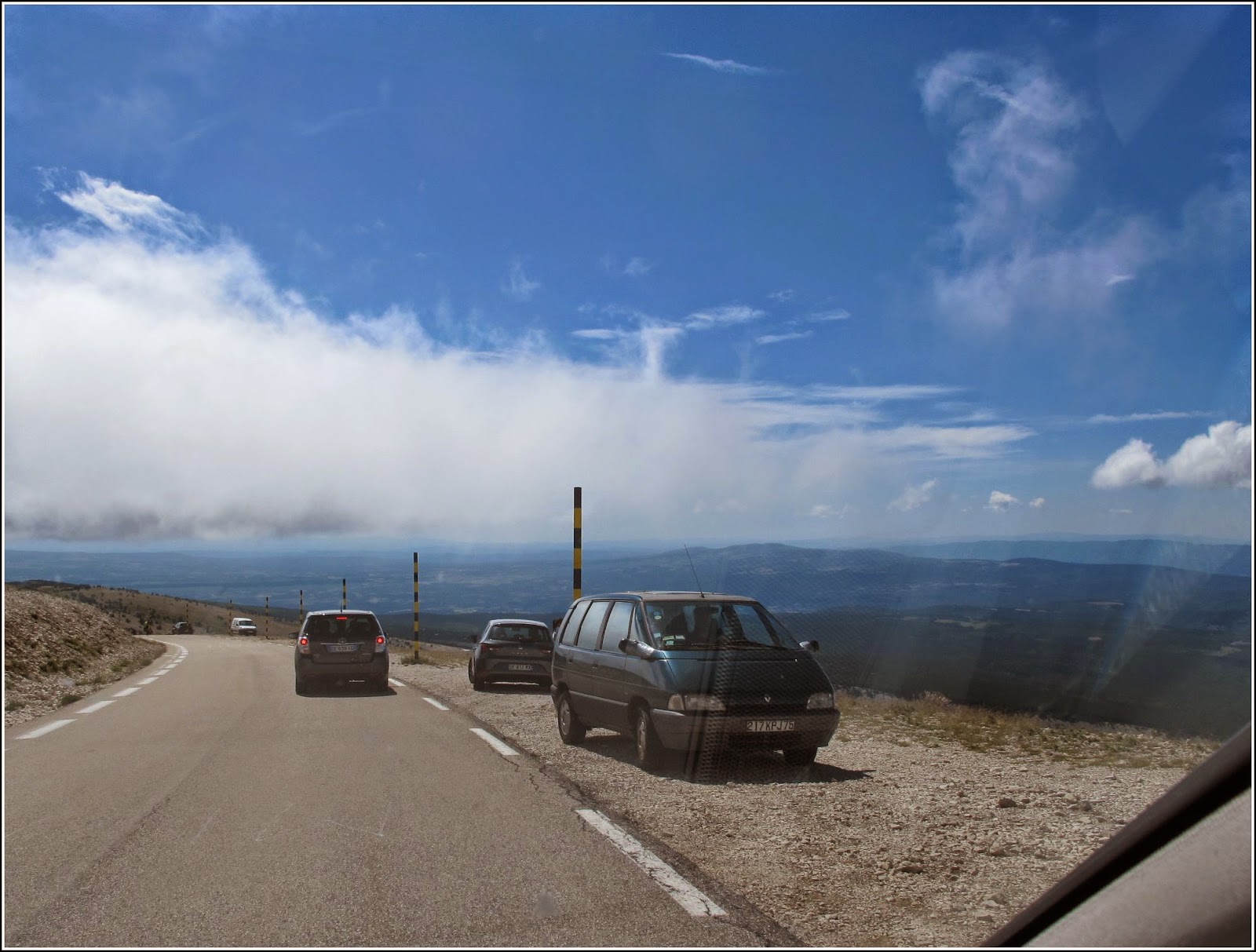 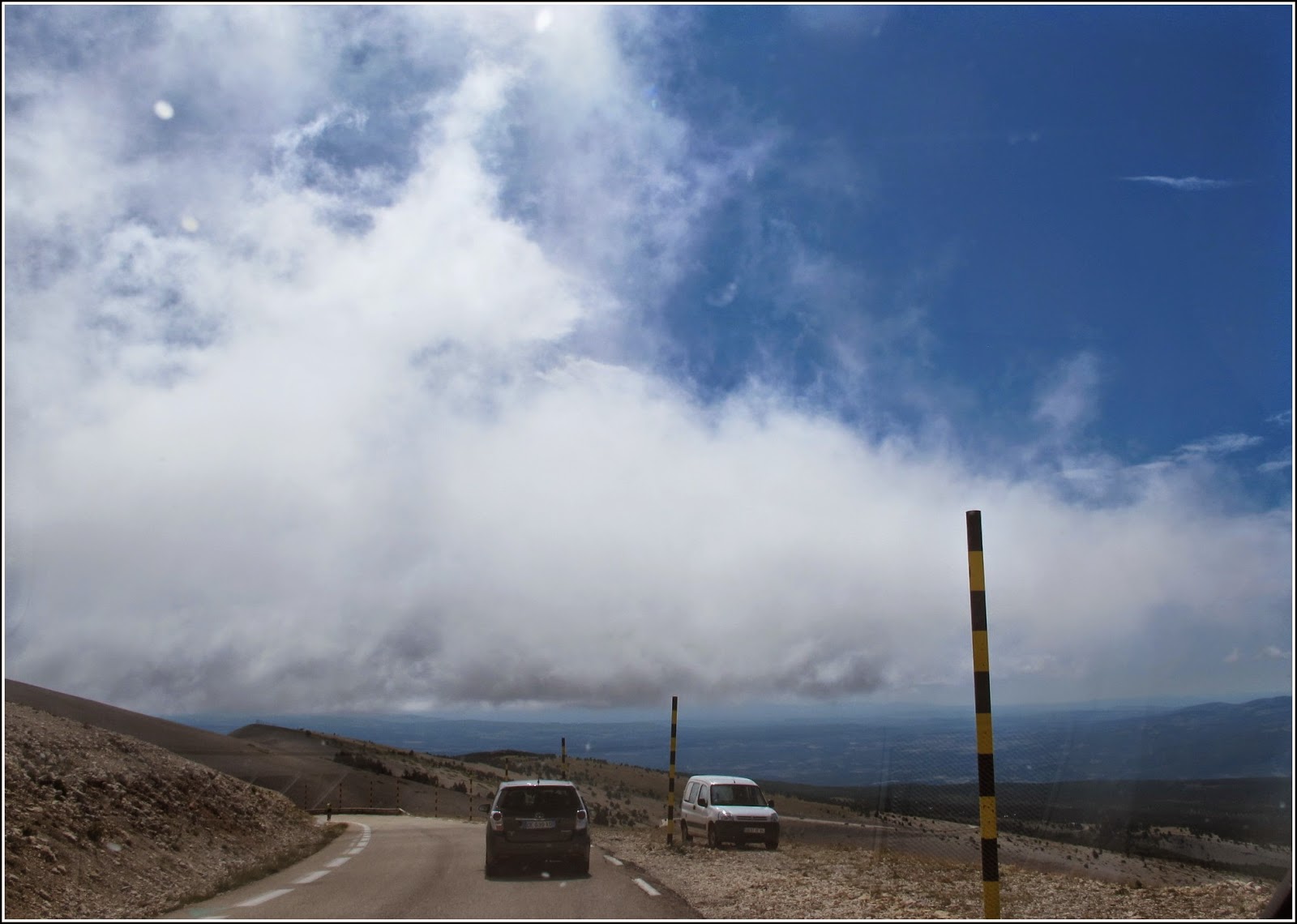 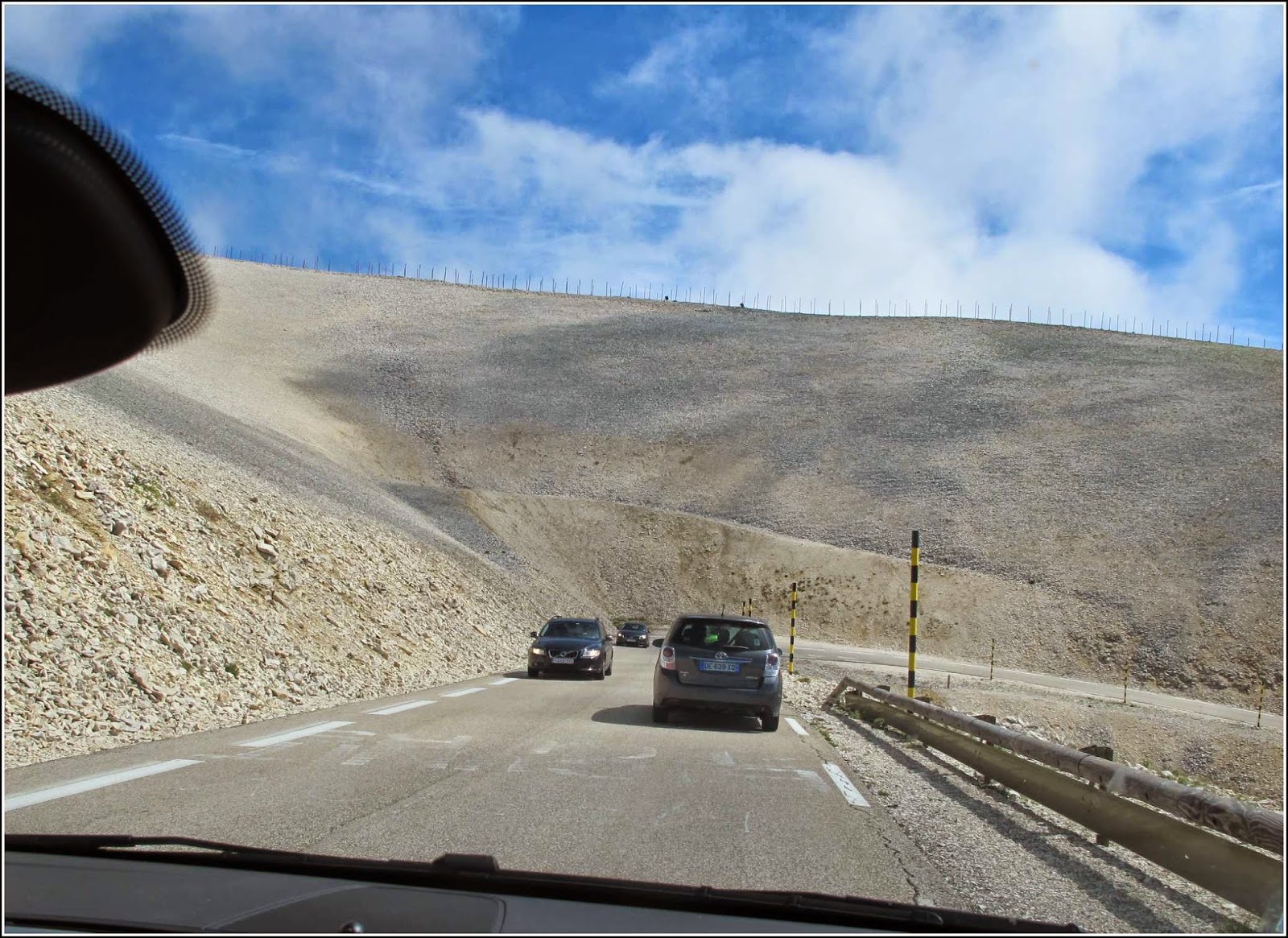 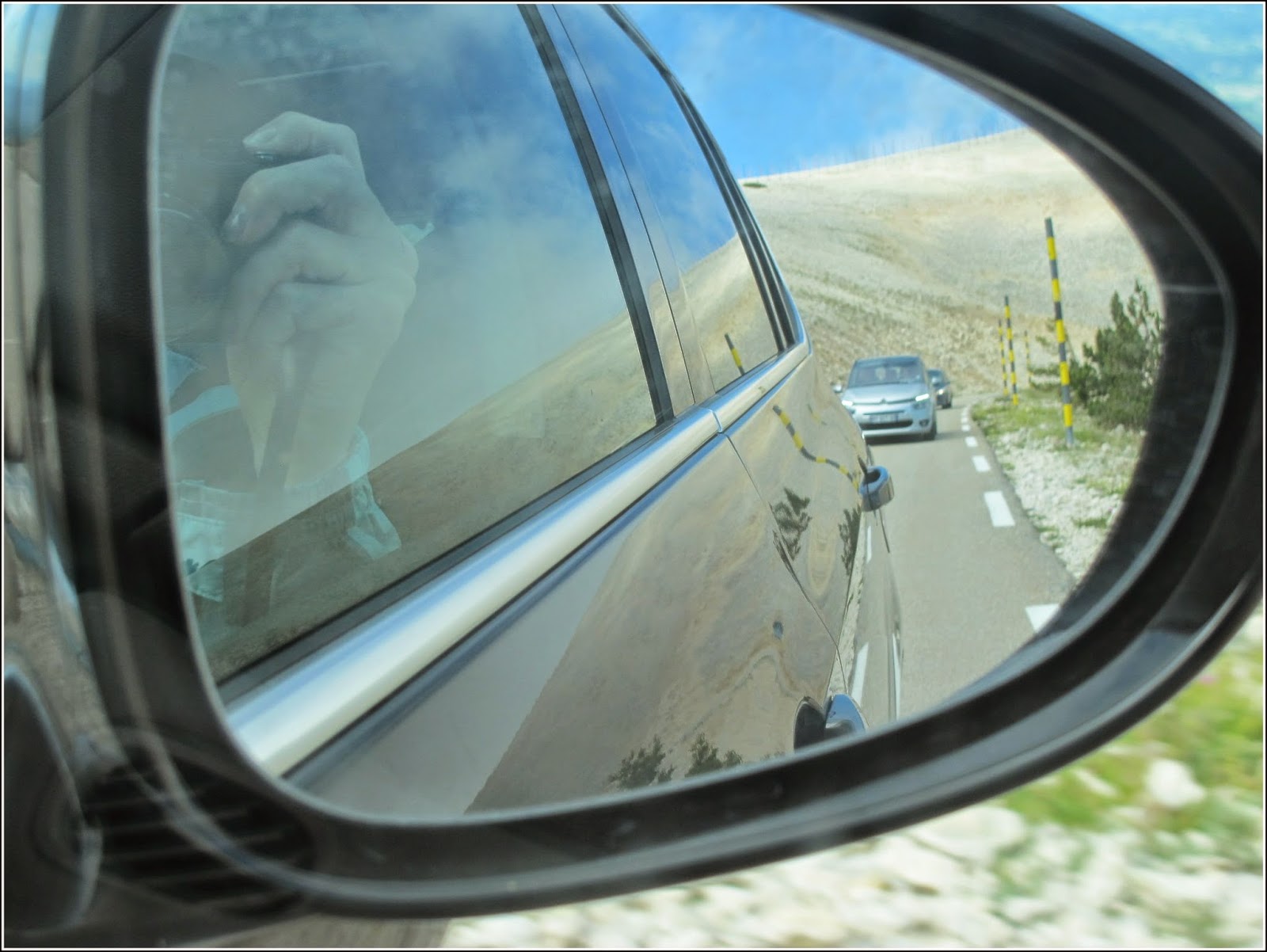 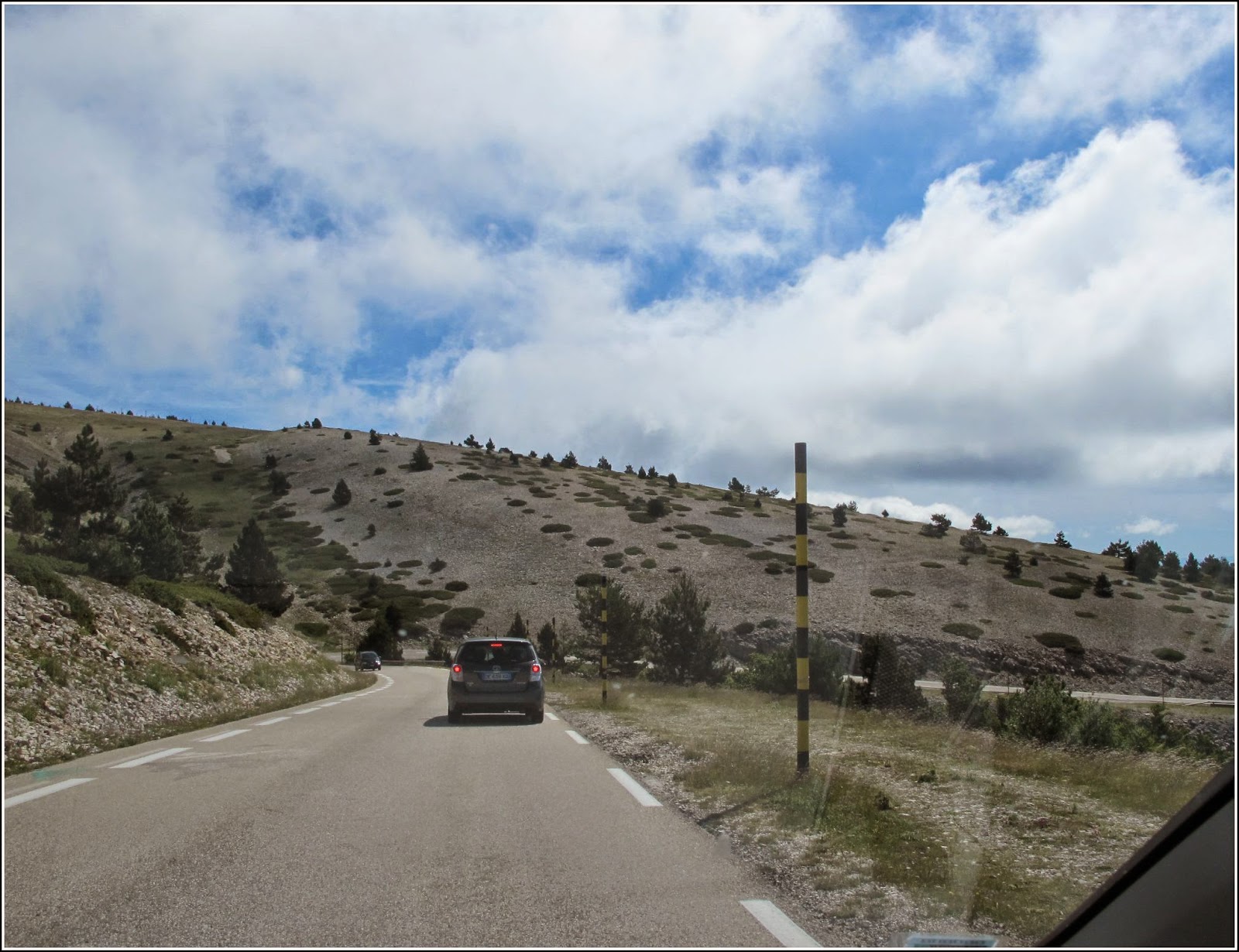 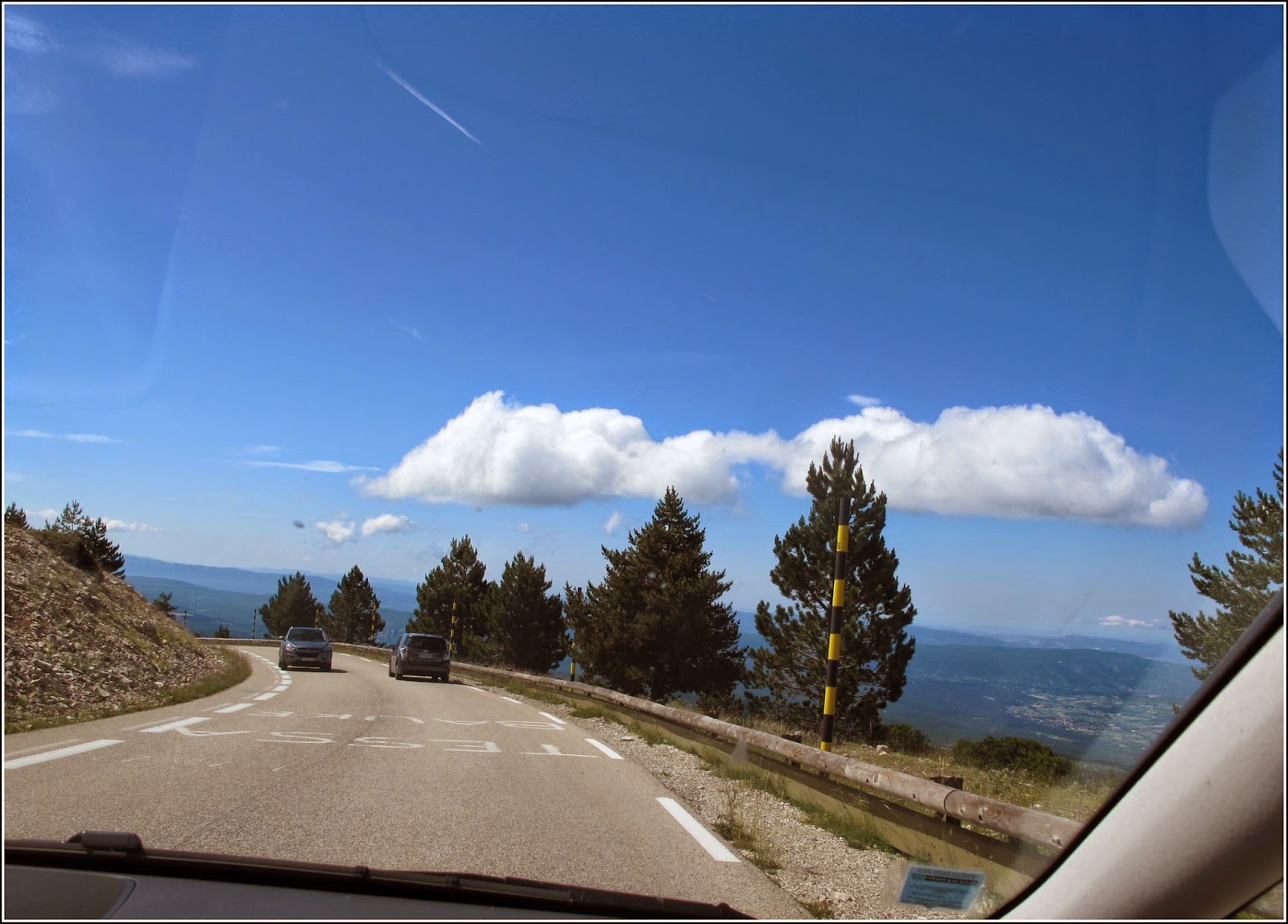 On the level at last! It's not very wide for the bicyclists. 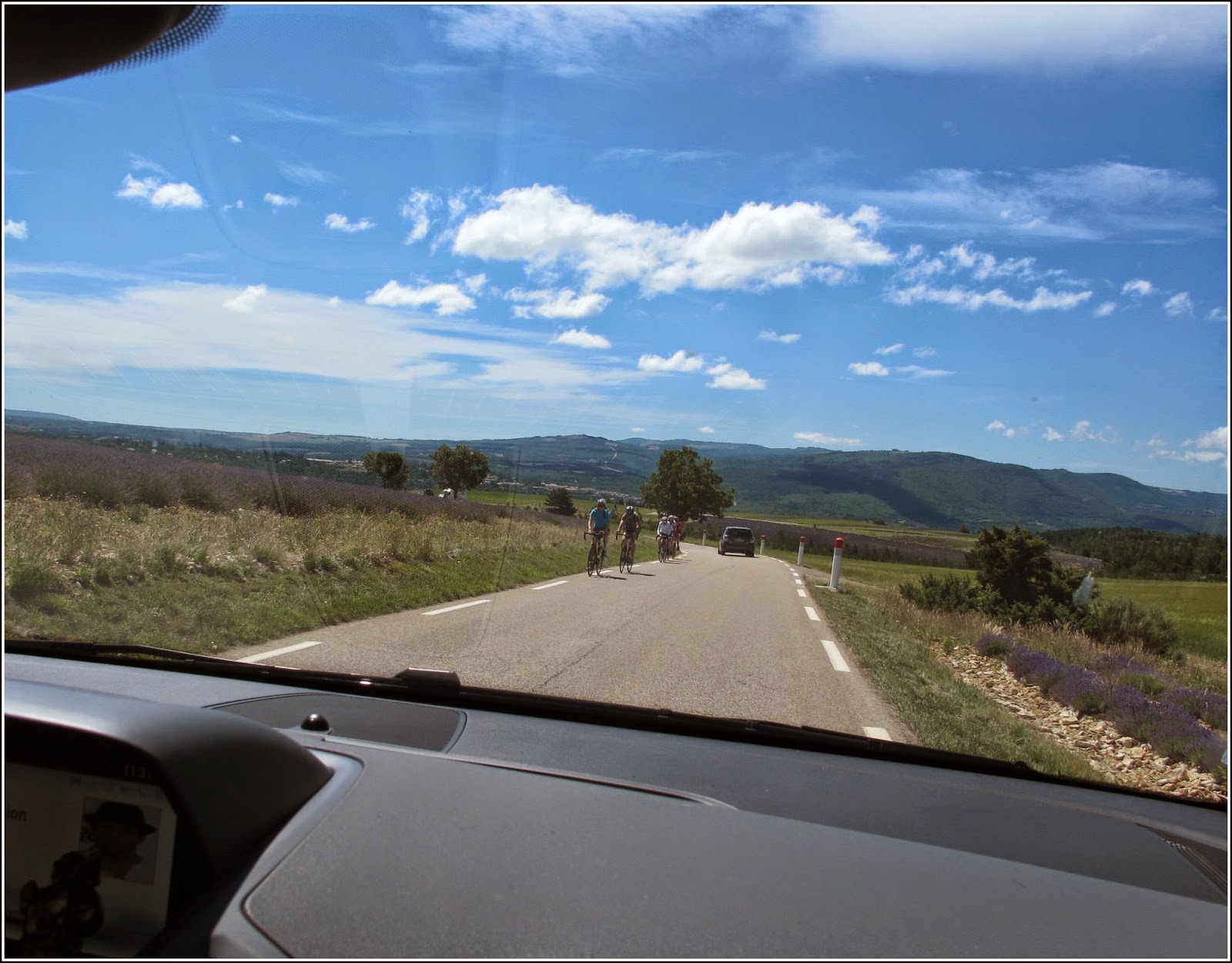