The phrase "lazy days of summer" comes to mind. It describes my current mood and actions. Nothing noteworthy for day after day, nothing rising to the level of blog worthiness. Teetering stacks of papers await me, unsorted, unfiled. My customized itinerary for the next trip needs to be completed.

Oh, the usual: Needle Crafts. I have photos somewhere. There has been a flurry of baby hats and socks created in sizes from preemie to bigger babies to be donated to nurseries in hospitals. 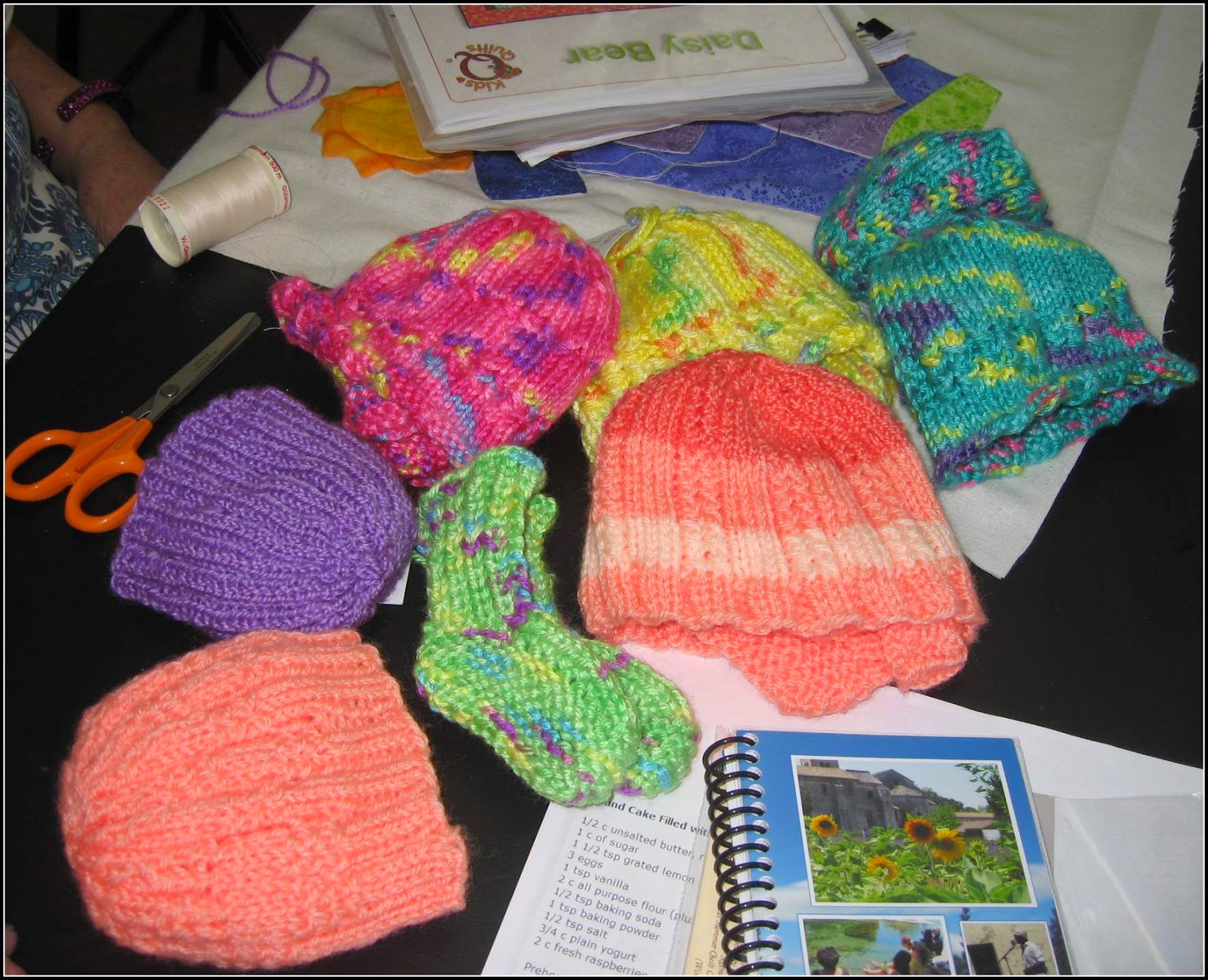 And movies were seen. Have I mentioned that?  My car needed an oil change and new brakes, so courtesy service dropped me off at the Regal 10 and I watched Hercules in 3-D and Sex Tape in lots of nudity. (Who brings their pre-teen to Sex Tape? Doesn't the title alone give pause?) I went to a Stage 3 Theatre performance of On Golden Pond. I attended an out-of-town orientation for the next trip I'm going on and delivered pocket itineraries to the other participants. Then Sister and I went to see 3-D Guardians of the Galaxy. 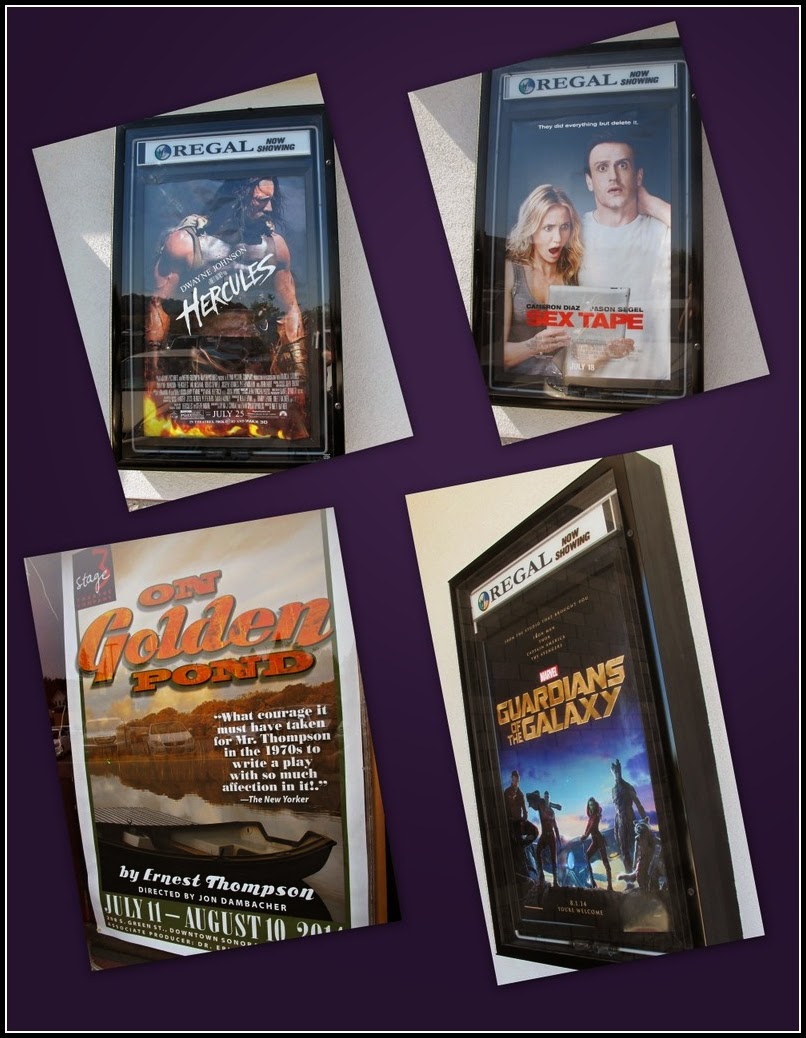 I haven't seen that many movies in so short a period since my radiation vacation five years ago, when I took in at least one movie between twice-daily radiation treatments for a week.

Sister and I got word through the grapevine at NeedleCrafts that one of our small local eateries was shutting their doors after Sunday breakfast so the owners could help out their elderly mother who lives to the north. It's been a go-to place for hearty sandwiches and scrumptious home made pies, and big breakfasts, including Sunday blueberry pancakes that rival the best blueberry pancakes in these parts. Sister and I went to that last Sunday breakfast for blueberry pancakes. The place had a steady stream of locals who regularly eat there, many of us who came for the last hurrah, and random tourists who dropped in and sometimes dropped out because service was leisurely under the circumstance. I overate, because I didn't intend to leave a single bite of blueberry pancakes behind. (Alas, no pictures. Why did I not memorialize?)

Later that day that I got a call from Sister asking whether I had the phone number of the new-in-town podiatrist. She'd jammed her little toe into a door and thought it was broken. Funny, I had just looked up his number a day or two earlier because I have a tender spot on the ball of my foot that I want looked at before my next trip. She called me the next morning, having gotten an order for an X-ray from him and an appointment on Thursday with him, so we had another outing to the Little City Down the Hill where they keep the X-ray machines. I called him not long after she had to get my own appointment for Thursday.

Tuesday morning, I had occasion to post these words on Facebook:  "I guess those darn doors into the garage are out to get me, too (see my sister's encounter on Sunday). As I opened the door a little while ago, it scraped across my little toe. Ow. I leaned down to see whether it had messed up my toe nail. There is blood. I'll pull the Kleenex off in a little while to see what happened. It's not nearly as serious as sister's injury, I'm sure, but a bit ironic." That hurt-y part of the door was weatherstripping.

This was the chain of events that led up to Sister's a.m. appointment with the podiatrist. He confirmed that her toe is indeed broken. Treatment is to continue with pretty much what she has been doing, buddy-taping it. At my appointment in the afternoon, he discovered that the nail on the pinkie toe had been split vertically, so he took half of it off.  There was infection on the tip of the toe, so my prescription is to soak it in Epsom salts twice daily for several days. I need to get gel insoles for the original problem of the bump on my foot I made the appointment for.

Saturday was a big day in our Little Town. We -- Sister, Brother-in-Law and I -- had anticipated that a couple of overlapping events might strain downtown parking, but there were more events than we knew. We were heading for a return performance of the Life in the Fast Lane Eagles Tribute Band. They'd played at the hotel two years ago and were back by popular demand.

Our crowd strategy was to get to town early to get the car parked, then go to the Mexican restaurant for dinner. There had been the strong temptation to the All You Can Eat Shrimp and Sausage BBQ put on by the Rotary at the other end of town, but it didn't serve until two hours before the concert and it just felt like it cut too close. We thought the crowd going to the historical society would clear out the restaurant by about 6:30. They didn't. We were wait-listed at 45 minutes. To be on the safe side, we went to the tea shop for dessert first, while we waited. Me, slow eater, was panicking when we didn't get seated in the restaurant until 7:20. Order, wait, eat, pay, walk back over to the hotel in 40 minutes? My bowl of cereal and cup of coffee for breakfast takes me 40 minutes.

We picked up a solo diner and ate as a foursome, thus making one table available for the next party on the list. As I was sitting there, I realized I'd forgotten my camera. My camera! My way of remembering, reliving the concert, putting it here, in my "diary."  I would lose my parking space if I made a run for home. Sister volunteered BIL's camera, since I have a front row seat and they're in the fourth row. So the following photos  of are made with an unfamiliar camera. 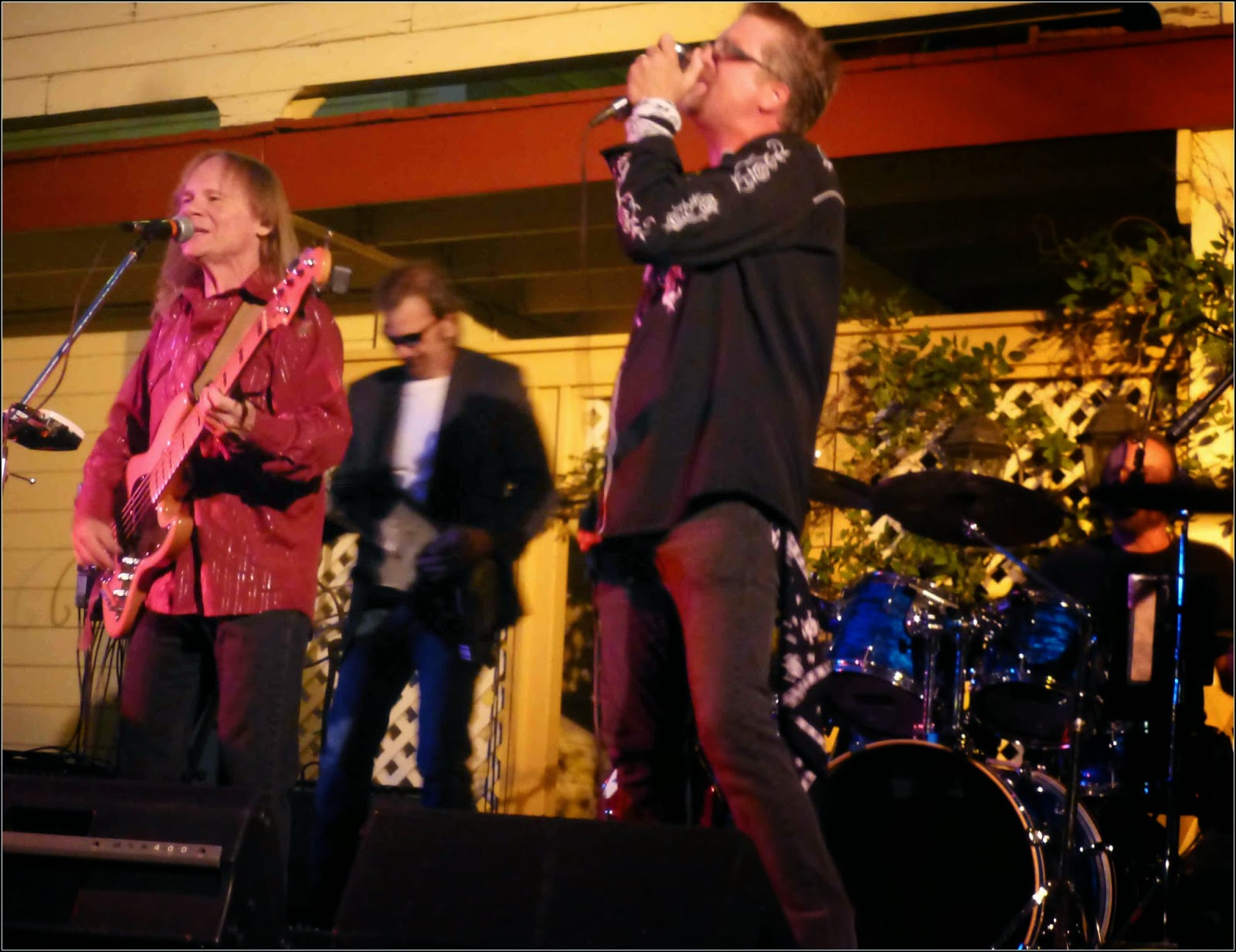 The dance ladies were up from the get-go, and the small dance floor was crowded all night long, with a significant proportion of the crowd with white hair. Well, let's face it, we're still the rock and roll generation. No one said we had to age into our own grannies' music. I can't remember lyrics to the songs, which most of the people could, but I sing along anyway.

I so wanted to get up and dance, but I worried that the wide-ranging perpetual motion ladies, or a couple of men swinging their partners enthusiastically would step on my toe. One lady coaxed me up and I cautiously moved around at the edges of the dance floor for a bit. Later on, Sister made her way up from the fourth row and we danced to Hotel California, her knowing I'd be missing my husband and lover (one and the same, thank you) when I heard that song, a favorite. You can read more about the playlist and the band and my husband here when I blogged about it after Life in the Fast Lane was here two years ago .

Don't wait another two years to come back, guys.

In the course of writing this, I have managed to tie up a couple of the loose ends that had been bogging me down. But that's another story.