A 5-Point Landing … and the Advantages of Small Group Travel

(This was drafted on July 13 near the end of my trip to France while I was Internet-deprived and semi-reclusive. It provides a bit of context for my big gap in blog coverage.)

I’m on the second session of the lavender tour. Gotta tell you, as usual, I’ve fallen behind on blogging, so my strategy will shift from the daily record format (such as it is) more to dealing topically with the similar destinations of the two groups. The first group left on June 30 and the new group arrived on July 5. I’m doing the double tour, because last year I came with the 1st group and a cool season had delayed the lavender crop.

The second session that year saw a beautiful crop.

Taking no chances of missing the lavender again, I signed up for both. I’m also staying over for several days, because -- catch this one --  it saves on airfare. Double the pleasure, double the fun.  One of my favorite towns in Provence is Sault, which is in higher country and grows the true lavender. On my only visit there, I fell in love with it and thought that if I ever moved to France, that would be the place. For practical reasons, that will never happen, but I was really happy that a return to Sault was on the itinerary this year.

But something happened to the first session's trip to Sault. Originally scheduled to have lunch with French friends of the group in Sault, we learned the husband of the couple had a medical problem, so the day was changed so the lunch could be provided by another French friend in a different town. We began the day’s Mont Ventoux/Sault schedule, but we ran behind too much to visit Sault and get to lunch on time back in Bedoin. It was a disappointment assuaged by the promise of going to Sault during the second session.

Flash forward to a few days ago. It was an ordinary day, a simple schedule of visiting the Luberon: the Abbaye de Senanque, Roussillon and Gordes.  Roussillon and Gordes have been on the itineraries of every tour or class I’ve been on in Provence. They never fail to excite. I’ve also been to Senanque several times.  It takes an early start to do them all.

Here’s me at noonish in Roussillon, where I’d wandered around the old cemetery while the rest of the group was on a walk along the rim (and some steep ups and downs) of the hilltop the village sits on. 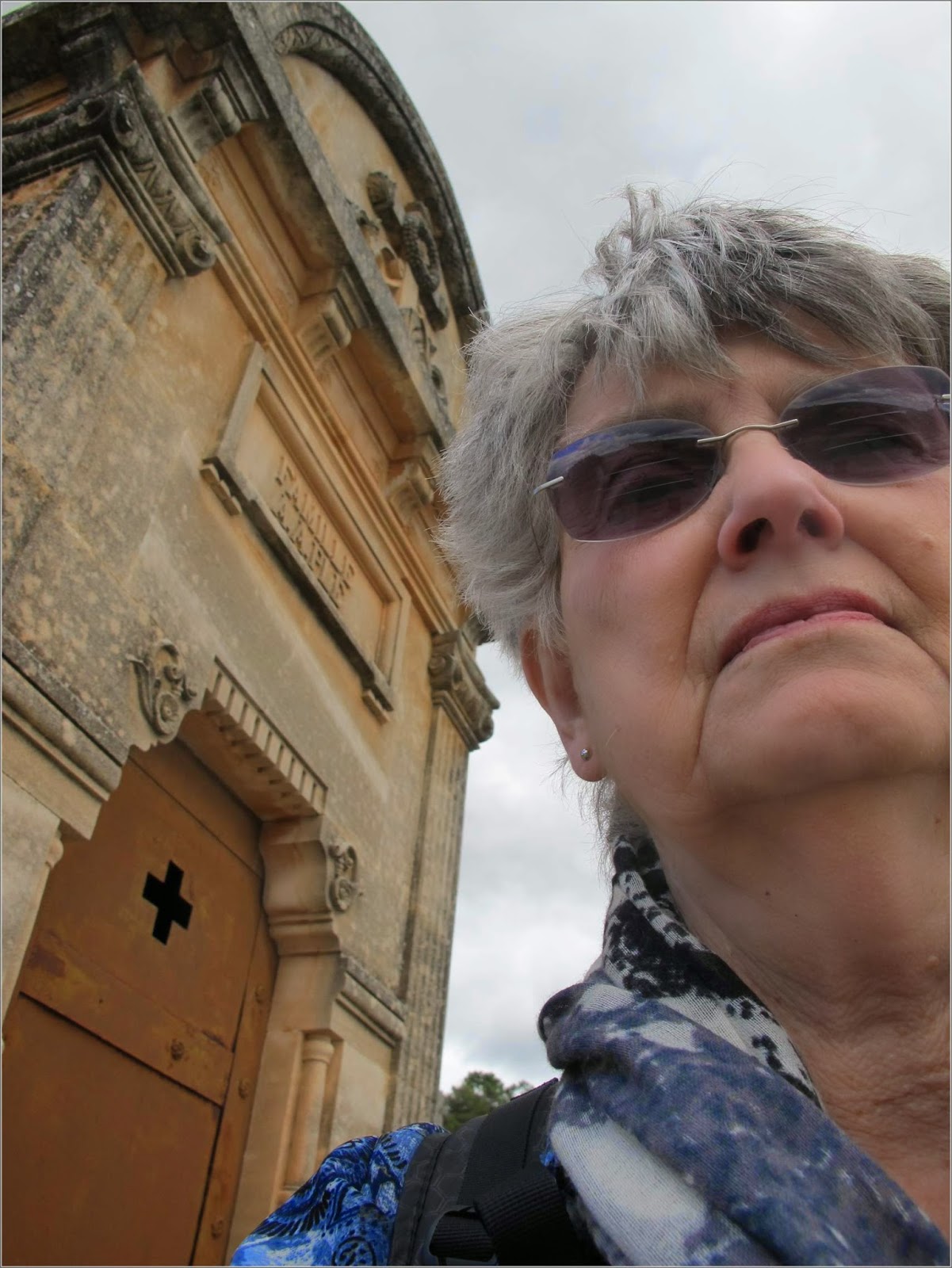 It was a beautiful day, photo-wise, with billowy clouds racing across the blue sky and a cold Mistral blowing. We ate lunch together, at the usual place. More on that in another blog.

When we got back to the villa, I went to put some laundry in the washing machine. It’s tiny and takes forever to run, and I was down to my last duds, several times over. Someone generously let me skip to the front of the line. I forgot exactly where the dryer was located and stepped back to look in the door to the laundry room, which is under some portion of the house. It was there, right next to the washer, so I turned back to the big table on the terrasse that we gather around for relaxation, snacks, a meal, web surfing, or whatever.

Have you ever taken a step, felt the bump of a toe, and found yourself flying? You know that unless you get a good grip on something, your feet will not come under you on time? There was a slender plant with several branches growing beside the big cypress tree. I grabbed for one of the slim leafy branches.

I have been walking ever so gingerly on this trip, giving thought to every step’s placement on the cobblestones and other uneven surfaces, often using my trekking pole for major roughness. My Little Old Lady mode.  It’s a caution that I adopted two or three years ago (whenever it was) when I landed on the side of my face on the sidewalk of Our Little Town, in full view of most of the town.

In just an instant, I neglected that caution, and turned, looking at my pack and trekking stick on the table and thinking of them, instead of my footing. That’s how it always happens, thinking around a corner and neglecting the ground in front of me.  I caught my toe on an uneven paver stone, grabbed for the twig, and couldn’t even get my hands out front of me. I landed full on my face (mentally reviewing a few censored thoughts as I hit) and the two nurses in the group were at my side, with ice and wet towels to sop up the blood coming from my mouth.

Well, that’s enough detail. Abrasions on a knee and my wrists, a pending bruise on the other knee. My glasses did not break or bend, although they are scratched, no holes in the knees of my pants (last time the fall made a hole right through the knee of my new, not cheap NYDJ . . . I don’t think they still call them . . . pedal pushers.

The doctor, owner of the house, appeared.  He wanted me to go next morning to the clinic for an x-ray of the nose (discussion was had about whether it looked deviated), without food or drink after midnight in case I had to have something done that required anesthetic.

“But I want to go to Sault tomorrow!” I reminded Lisa.

I first saw what myself looks like on this selfie. I took it to send to Sister, who had left with Brother-in-Law at the end of the first session for a classic car event at Le Mans. I tried to Private Message it to her on Facebook, but FB wasn’t having it. Eventually, I just posted it so she’d get the message. 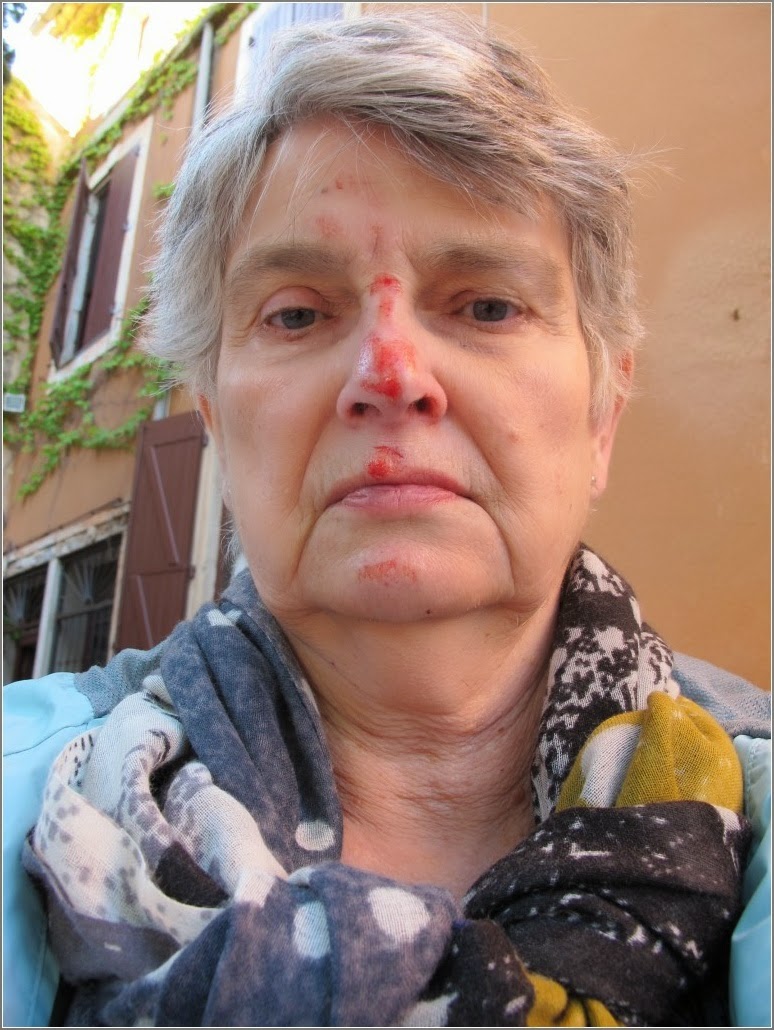 Phone call a couple of hours later: “WHAT DID YOU DO!”

Lisa whispered to me, “We’ve switched the trip to Sault to Friday so you can go, and the Friday trip to tomorrow. Works okay for the luncheon, too." I didn’t cry for the fall, but I teared up at how sweet and accommodating they all were and are.

So they all headed out for Avignon in the morning, for Bernard Castelain Chocolatier and Chateauneuf de Pape in the afternoon, while I hung out in my room most of the day.

Except for the “Men at Work” project partially visible out the tiny windows at the back of the house. I hear machinery. I must go peek. This thing is extending with a pallet-load of stuff going up on the roof right behind us. 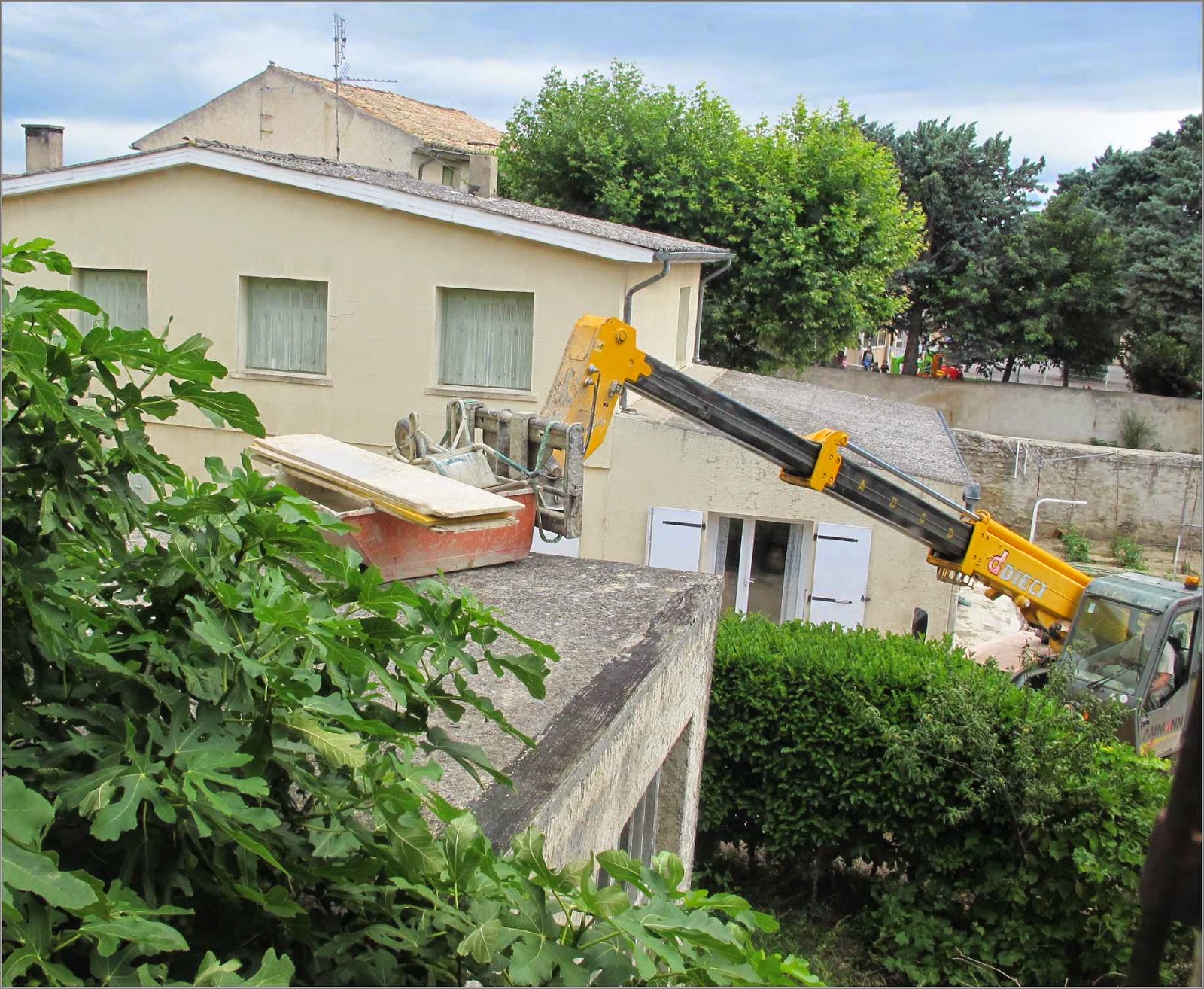 I also find the source of the high-pitched squeals, one fence farther over. Preschoolers. 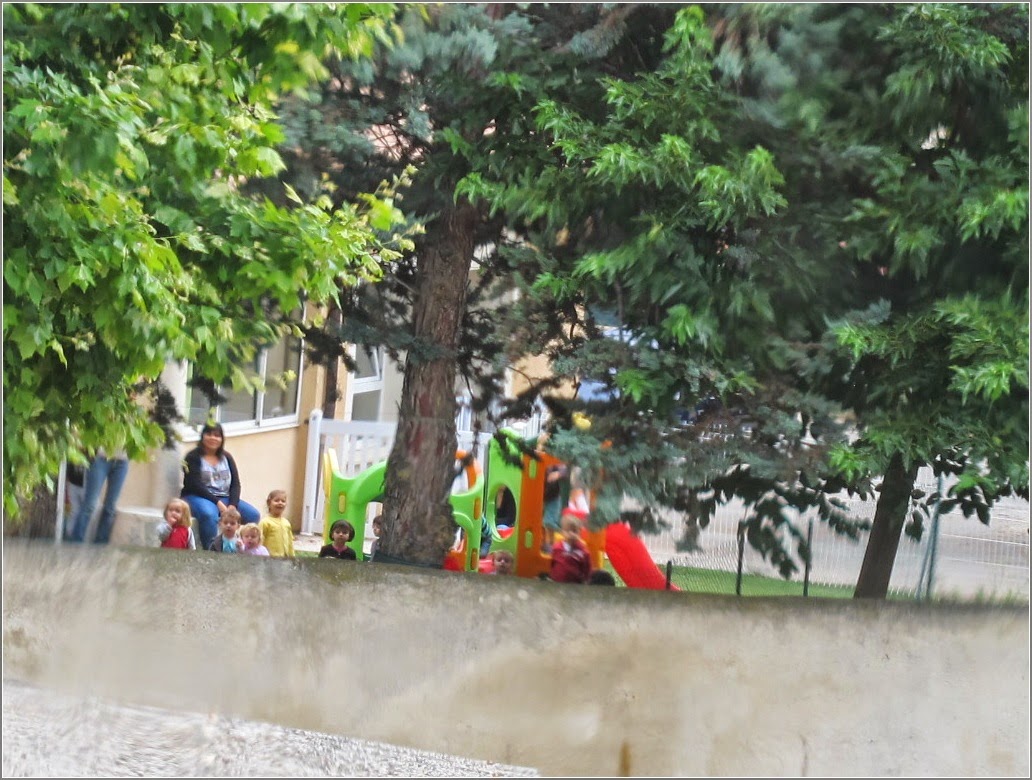 The machine driver is having a problem discharging the pallet. 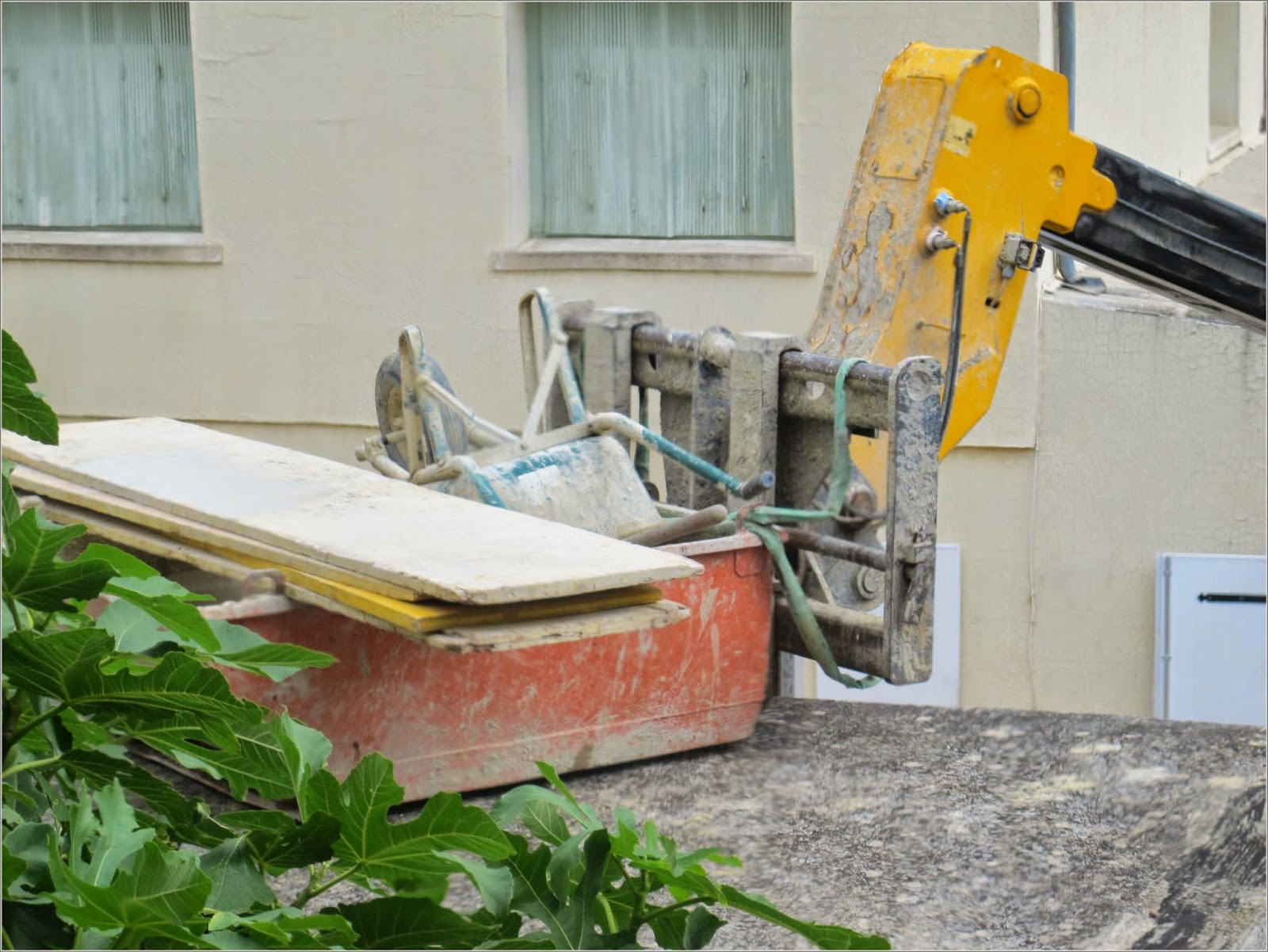 He sends up assistance. 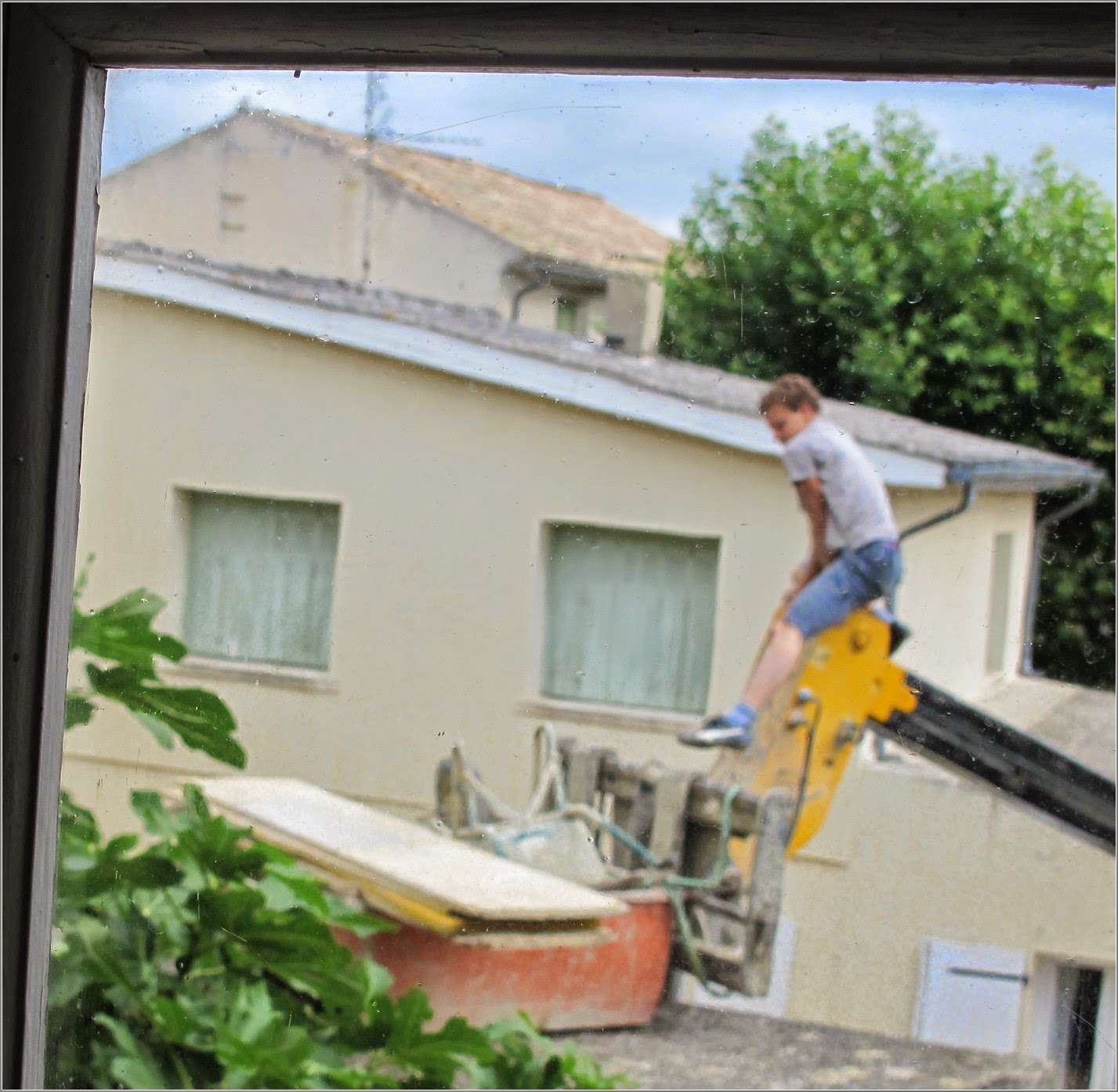 My interest wanes for a while, and when I come back, the machine is gone, bushes have been pruned, and a ladder extends to the roof. I’ll never know for sure what they were doing. 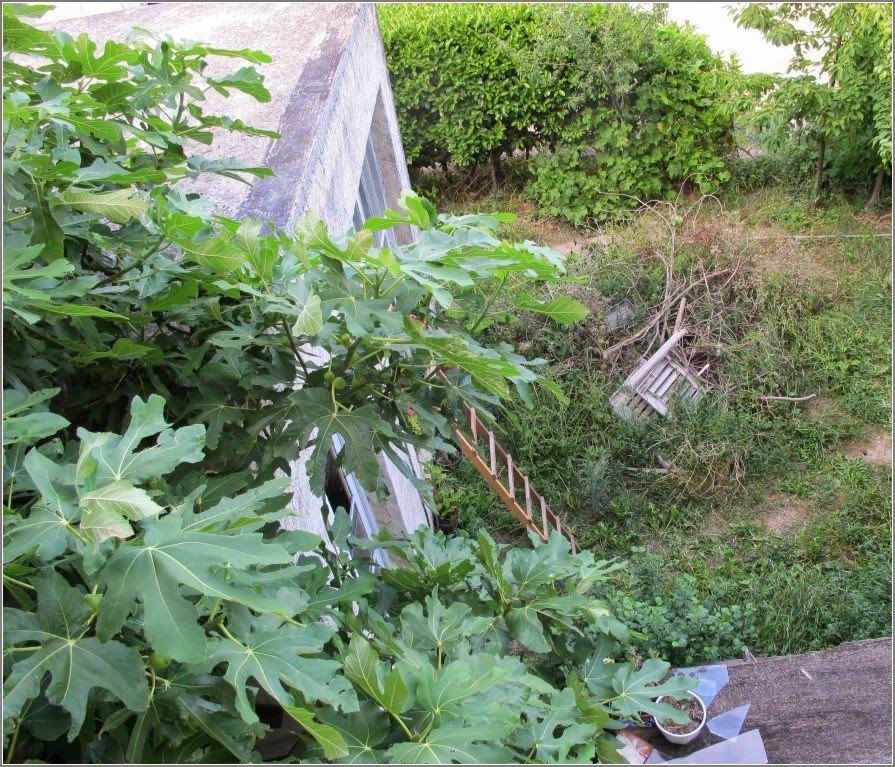 Because of the change in schedule, the “farewell dinner” will be this night, instead of the actual last night. The table is set in the play room, due to the cold and threatening weather. (This is Provence! What gives?) We have salmon with lemon caper sauce, épeautre , and grilled vegetables. The dessert is fruit cobbler, sort of, with ice cream and a sauce (lavender?). 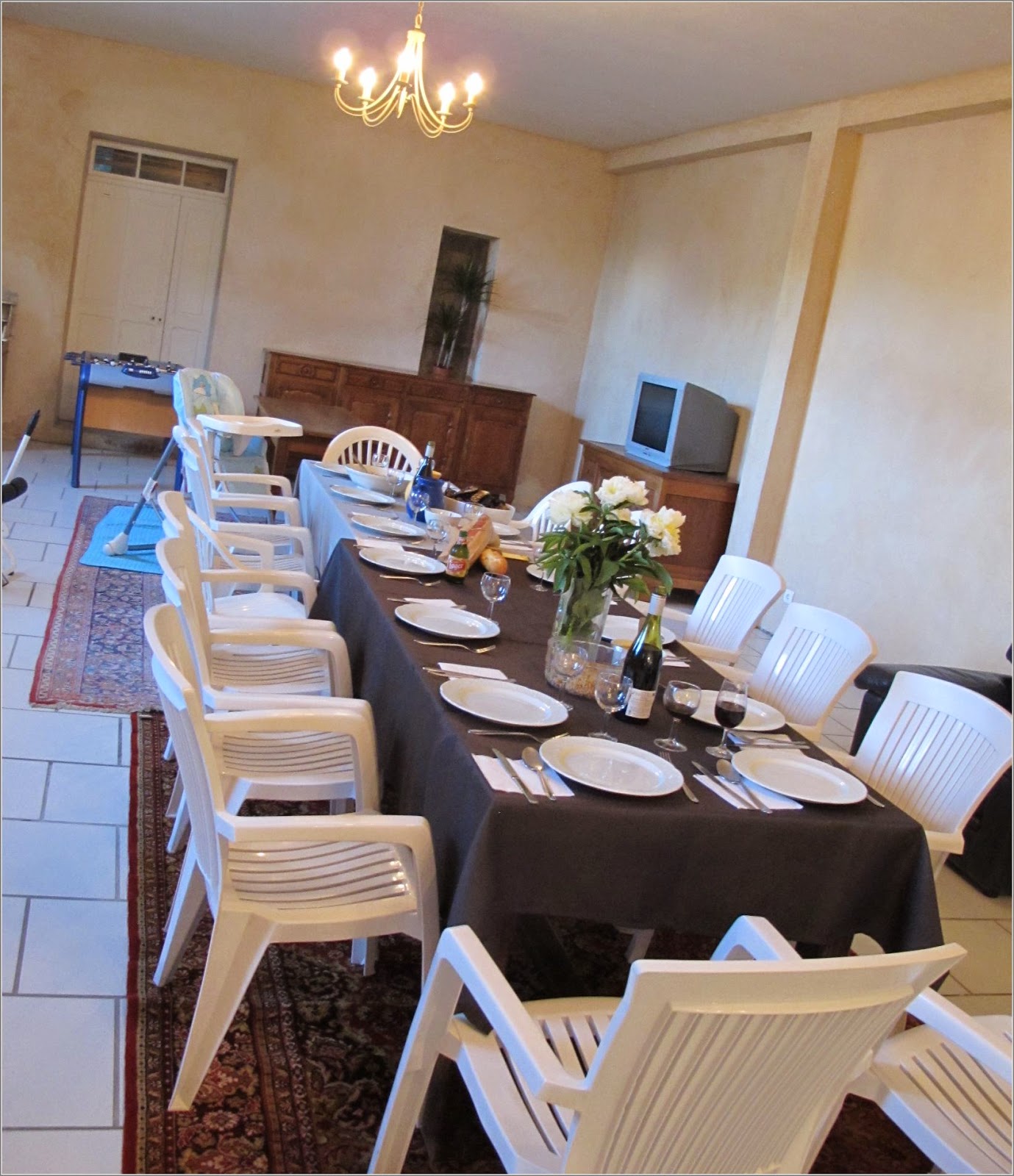 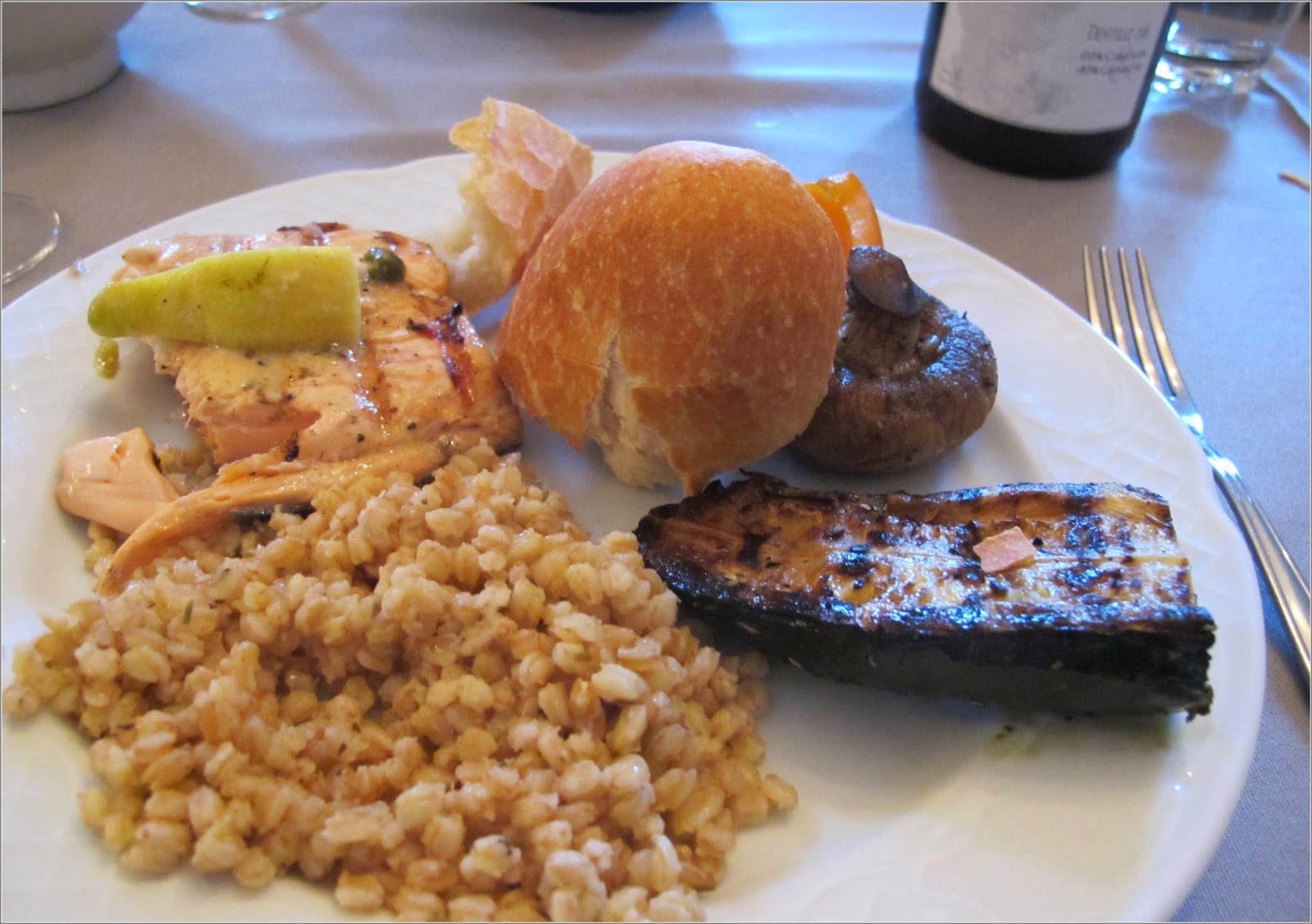 I’m pretty much hiding out in my hotel  room in Aix-en-Provence. The face is embarrassing.  I ventured out to the pharmacy at ten minutes before closing last night to see whether things are turning infected. On reflection, I think some of what looked so bad may have been sunscreen congealing on the wounds. They sold me something that’s supposed to get rid of scarring. Not sure whether it’s for fresh wounds or not. Then I got something to spray between lower lip and teeth, which may actually be the worst injury in the lot. There’s really an enormous bruise on my chin which I partially cover with make-up, since the skin is not broken. Today I went out for breakfast in the “salon,” and took a walk out to see whether the Office of Tourism was open (no). (I didn't mention, did I, that this is not only a holiday weekend in France . . . 14th of July . . . but the beginning of the exodus of the French people on vacation. Such traffic on the highways. Of course things are closed.) The hotel turned out to have a map that will probably get me to the bus station and I found the bus schedule to the airport on my laptop. Tomorrow I’ll make a trial run to the bus station and buy a ticket if I can in advance.

Kind of a woebegone selfie. 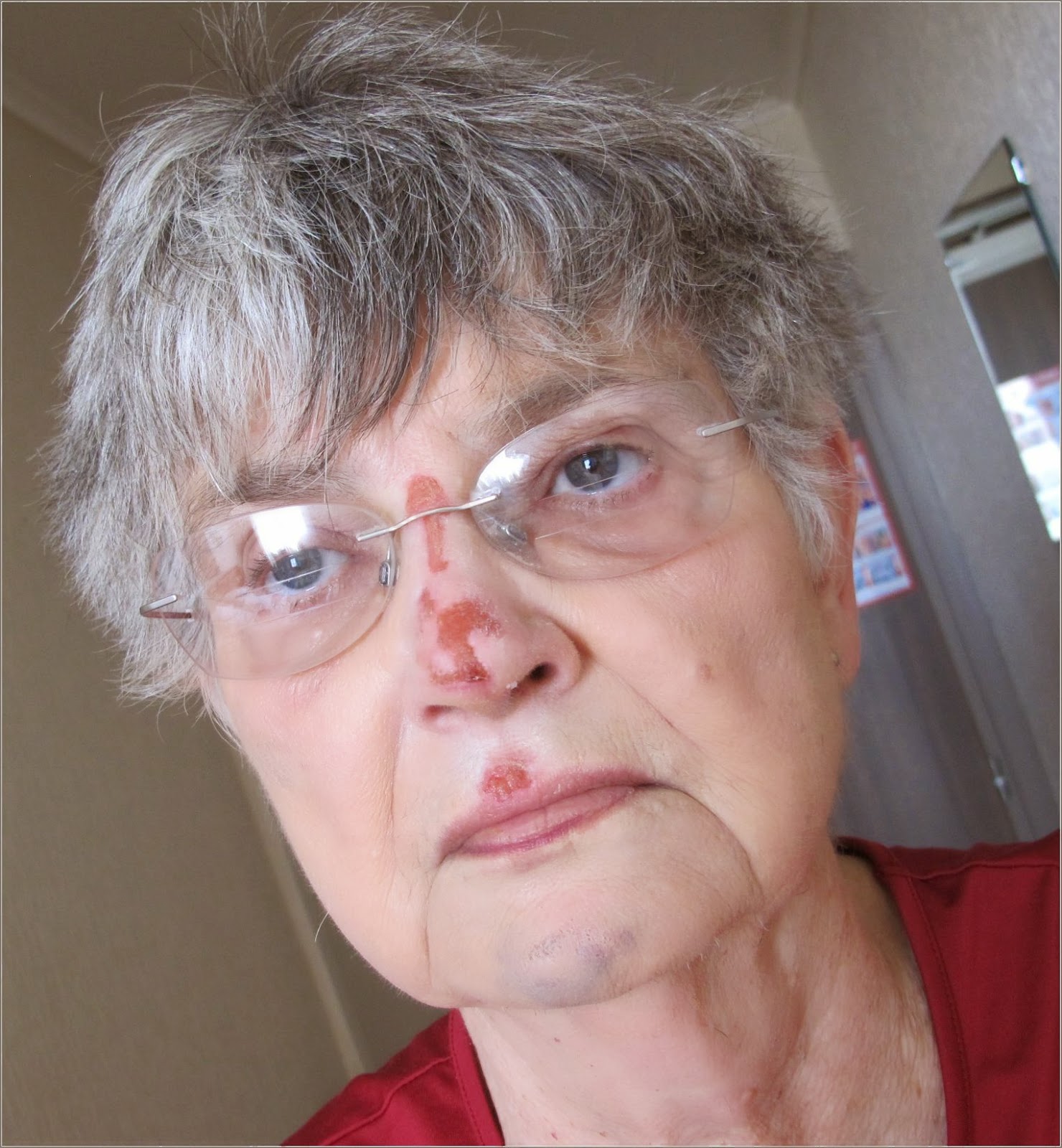 I fly out on Tuesday.

I’m home now, and will have more on the trip later. And I look
somewhat better, but I left my camera at Sister's, so no current photo.

Email ThisBlogThis!Share to TwitterShare to FacebookShare to Pinterest
Labels: falling down, France, Men at Work