No, what I'm referring to is what would happen to my head if it weren't screwed on. You have only to search "gremlins" in my blog search box to get a notion of how often things are lost or left behind and how I trust that the gremlins will bring them back to me.

Traveling does not relieve me of losing things. It's probably even worse while traveling. After all, there is that whole thing about living out of a couple of suitcases and a few drawers. Things get shuffled -- where did I put that thing I bought? -- especially little "valuables" that I don't want to carry around at all times and there is no safe in my room to stash them. (Is my money under my socks in the drawer or with the cables and cords in the backpack?) (Did I bring my trekking stick up to my room or is it still under the coffee table in the living room?) Socks, underwear (clean) and laundry (dirty) disappear daily.

When I fell on my face and had to go in to a clinic in the city to see about an x-ray of my nose the morning after, I didn't plan to take my trekking pole (or, in this situation, more properly referred to as a walking stick). "I'm afraid I'll forget it there," I told Beth. I have in  my travels left that walking stick behind somewhere several times. There have been miraculous returns, even before I put an address sticker on it. Yet the time when I most expected it to return, having left it hanging from the back of a chair in my room in Yosemite Lodge, it never reappeared in the lost and found.

Beth wanted the bunged-up me to bring it and use it, and she said she'd be responsible for remembering it. It's a good thing we took it, since there was massive remodeling taking place at the clinic and footing was treacherous. It's a good thing Beth promised to look out for the stick, because I did forget it after the great news that my nose wasn't broken and I could now go have coffee and croissant, having fasted overnight in prep for possible nose surgery.

The gremlins had spotty performance with returns of lost items on my recently completed trip.

On our last full day on the tour, we took our trip to Sault for the high country lavender. We browsed around town, so full of tourists compared to our trip here several years ago when it was a quiet little town. I'd wanted to see the lavender co-op, where lavender farmers have a shop to sell lavender and other locally grown products to tourists and locals.

I went in, and, in addition to lavender products, there were grains and cereals in transparent packages. I spotted épeautre; the grain the Lavender Ladies had prepared with our grand meals at the villa. You could think of it as kind of like rice, only more savory. I wanted some and wasn't sure I could buy it at home. And the price sounded good. I got a 500 gram package of that, and another of the delicious nougat that they make in France and costs an arm and a leg at market.

That evening, we were due to go back up to the lavender fields above Vinsobres for sunset lavender photos. The sunset photo shoot for the first session finished with a whimper, as a gathering storm swooped in at sunset and the rays of the setting sun were shrouded in stormy grey clouds. We were hoping for better conditions.

This day, we'd had a very busy day, lots of driving, and faced the prospect of packing for middle-of-the-night and very early departures to the airport. So we waffled. I -- the one with the bunged up face and stiffening body -- wanted to go, but I would not ask to be the only one, but quite a bit of enthusiasm was generated. Furthermore, the main real photographer, young patriarch of a young family who brought his wife, baby daughter, and all his relatives to this place he loved and where he proposed to his wife, he had photographed them all in the lavender fields in the daytime, and all his photos of the lavender fields had disappeared. He was eager to take the family out this last time to recreate some of those memories he'd captured and now couldn't find.

So I ran (er, pulled myself by the banister) upstairs to get my sneakers running shoes and changed out of my sandals in the car and away we all went again, up above Vinsobres. This time it was a fair success, not the very best sunset I've ever seen, but some nice light and shadows.

Packing. I wasn't leaving as early as the rest because I was going to Aix-en-Provence for a few days and I wasn't being delivered until later in the morning, so I was a little leisurely getting going, as in I was packing late at night after everyone else had already gone to bed.

First of all, where were my épeautre and nougat? When I looked in my carry-on bag where I thought I had packed it, it was something else: my chocolates from Bernard Castelain. Oh, and the pottery dish with two red poppies painted on it that I'd bought in Roussillon. All I could think was that I'd left it on the floor in the front seat of Amanda's car. I'd have to get up early and catch her before she took off with her crew for the airport.

Well, I missed waking up that early, since they departed not much after I went to bed. And they were soooo quiet for people who had to get downstairs and underway. Amanda wasn't coming back. She'd be turning in her rental car and flying out herself. But during that wakeful period of realizing that my good stuff was gone, I also realized that my Birkenstocks were not among the things I had packed. By the time I mentally backtracked their last use, the last two cars had left for the airport as well. The Birkies were in the car I'd ridden in to the sunset photo shoot. Probably tucked in somewhere on the floor of the front seat when I'd changed into the running shoes. Lisa would be exchanging her big car for a small car and heading on east in southern France, without coming back to the villa. Beth would be back to pick up G, to stay a few more days in Marseille, and me, to be dropped off in Aix on their way there.

How could I get hold of one of the ladies to retrieve my shoes? I ran around frantically looking for G, who would know how to call Beth's phone number. He was missing (bicycling or running, one of his daily pursuits). After more running around, I suddenly spotted the Birkies on the floor in the front hallway. Someone had discovered them in the car and left them there for me.

After an overnight stay at Sister's and Brother-in-Law's, I headed home to my kitties. It was later, when I wanted to take cute kitty photos of the critters on the deck, many of whom now had tipped ears -- the cat rescue ladies were having good success with the spay/neuter project for the ferals -- that I failed to find my camera in any of my bags. I mentally backtracked and had no recollection of seeing it out somewhere at Sister's house whence I would have picked it up. The last time I had an actual recollection was of its dangling around my neck on the BART trip from the airport to Sister's City.

Did she call me and ask me if I was missing my camera? Or did I call her and ask if she'd seen it? Even that part is fading in memory. But she did ask whether I was missing my passport. Well . . . I didn't know. Last I remember is it was in the dorky ticket/passport holder I dangle around my neck through airports and on the BART.

"On the floor of the front seat."

That's not the first time that has happened. I should know by now that it's the first place I should check for missing items.

I had to make a trip this last weekend to attend orientation for Jeanne Mills' quilters tour for later this year, and deliver the pocket itineraries I made for the participants. I swung by Sister's Saturday night to pick up my camera and passport. REUNITED!

I can get back to taking pictures again. I haven't been totally deprived. I've taken a few with my older camera. I had to note that Don Pedro Lake is probably the lowest I've ever seen it since I moved to the mountains 25 years ago. 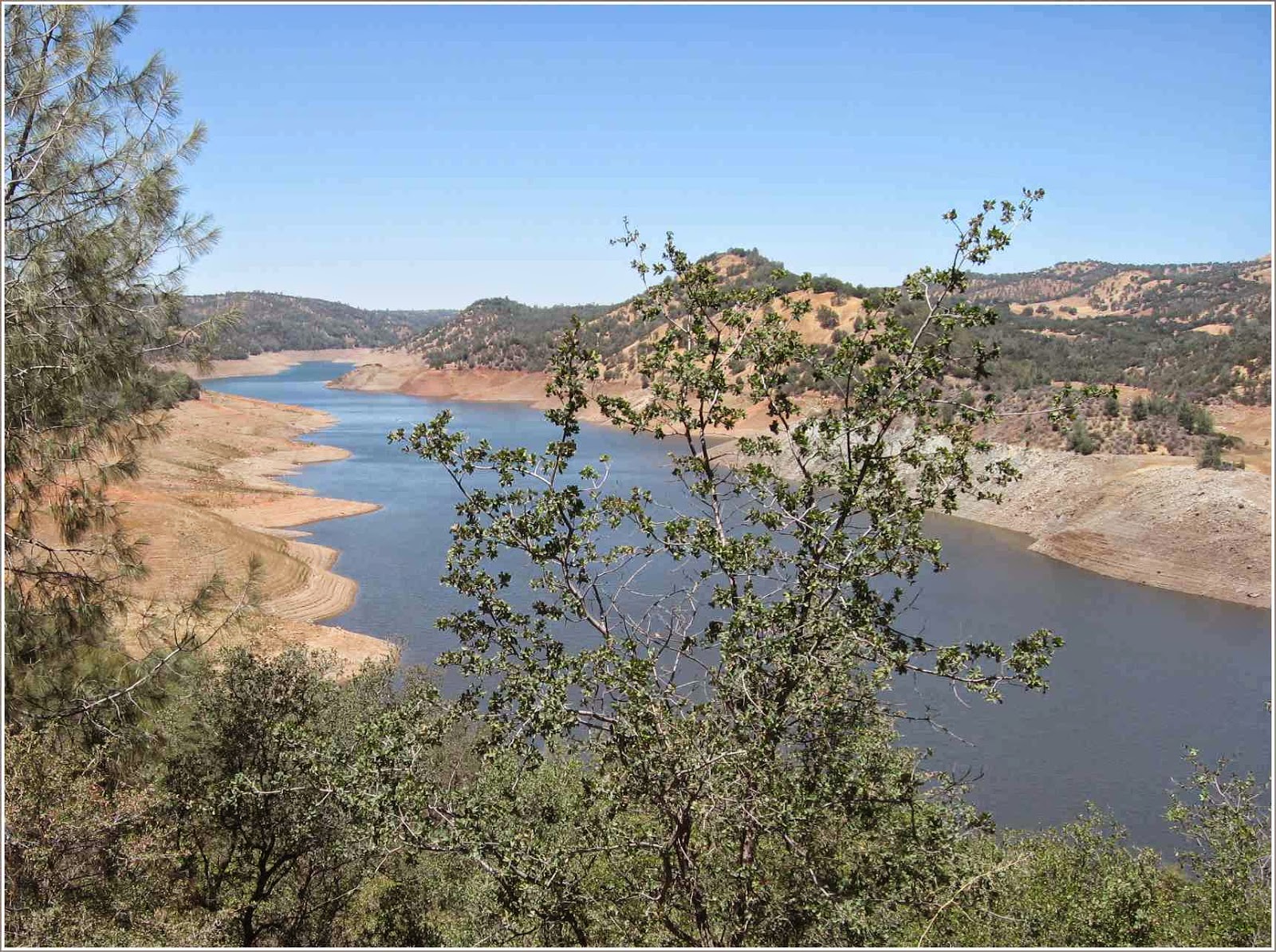 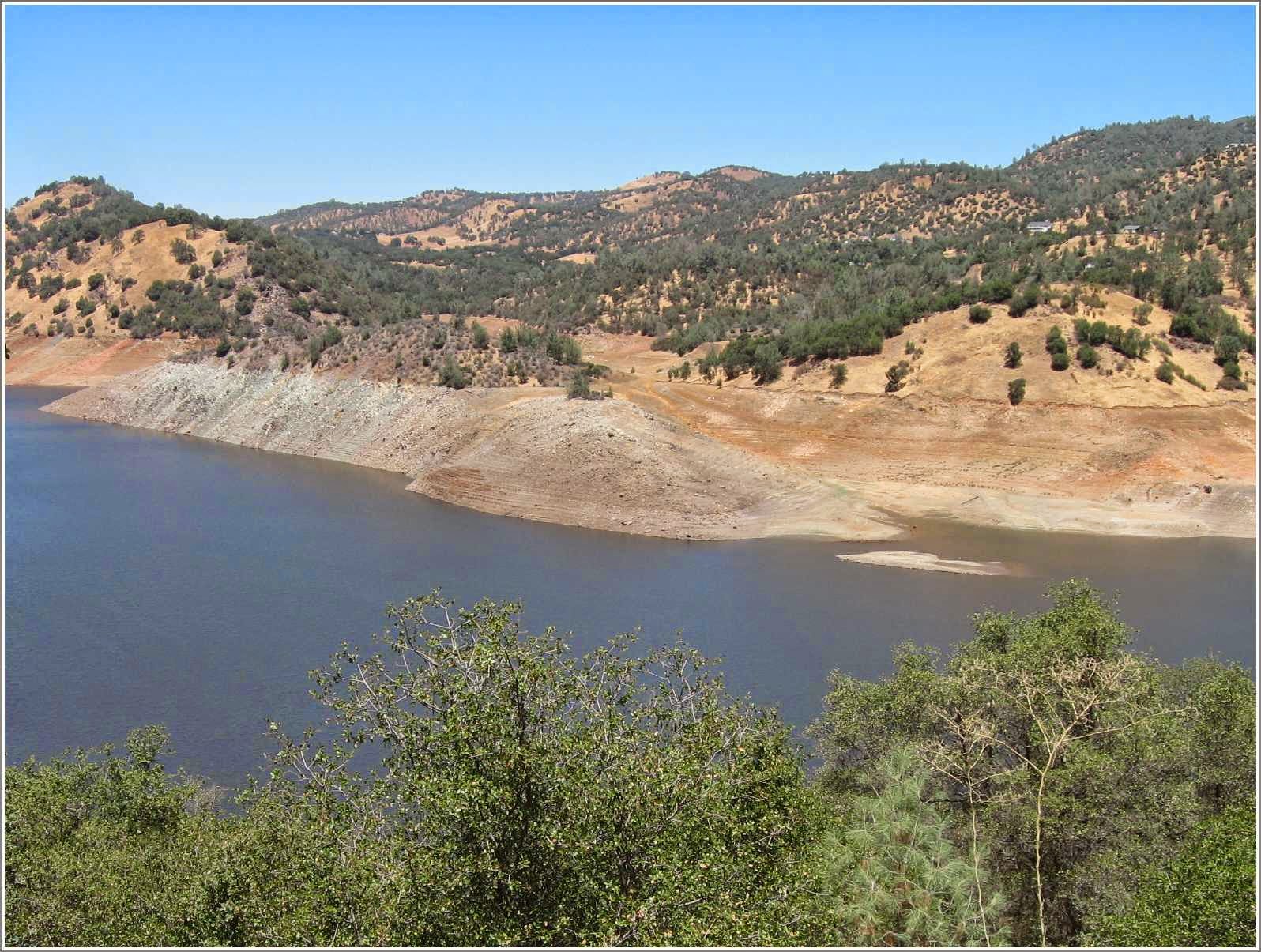 I'm hoping Amanda is chowing down on épeautre and nougat, instead of someone in the car rental agency chowing down on it. Or, that the suitcase that I have yet to unpack was where I really stashed them.