Well, technically it was still daylight, but the shutters had been shut against the storminess and it was dark but for a couple of overhead lights as everyone else walked out of the house and someone asked, "Will you be all right alone this evening?"

"Sure." I live alone and like it, so I don't mind some alone time after almost two weeks of togetherness.

It had been overcast all day. Do ya think it'll rain? we'd kept asking each other.  It was diffuse. A little high in the sky. Something lurking off somewhere.  I'd taken a nap in the afternoon and heard a constant rumbling noise. Testing jet engines? (It was a frequent happening near me during World War II, a sound not forgotten.) Black helicopters?  The echo of wind blowing across the chimneys? A fleet of Harleys starting their engines? Or simply thunder.

It proved to be the latter as my housemates stepped out the door into the deluge on their way to their evening engagement.

Nothing spooky. Not while it was booming. Did I mention? When I'm lying silently in my room I hear voices. Not really. I know it's not. I'm sure it's the sighs of wind through the shutters or something similar that sounds like the murmur of women's voices in endless conservation. I'm only aware of it when it's otherwise quiet.

But the clouds were not gone. 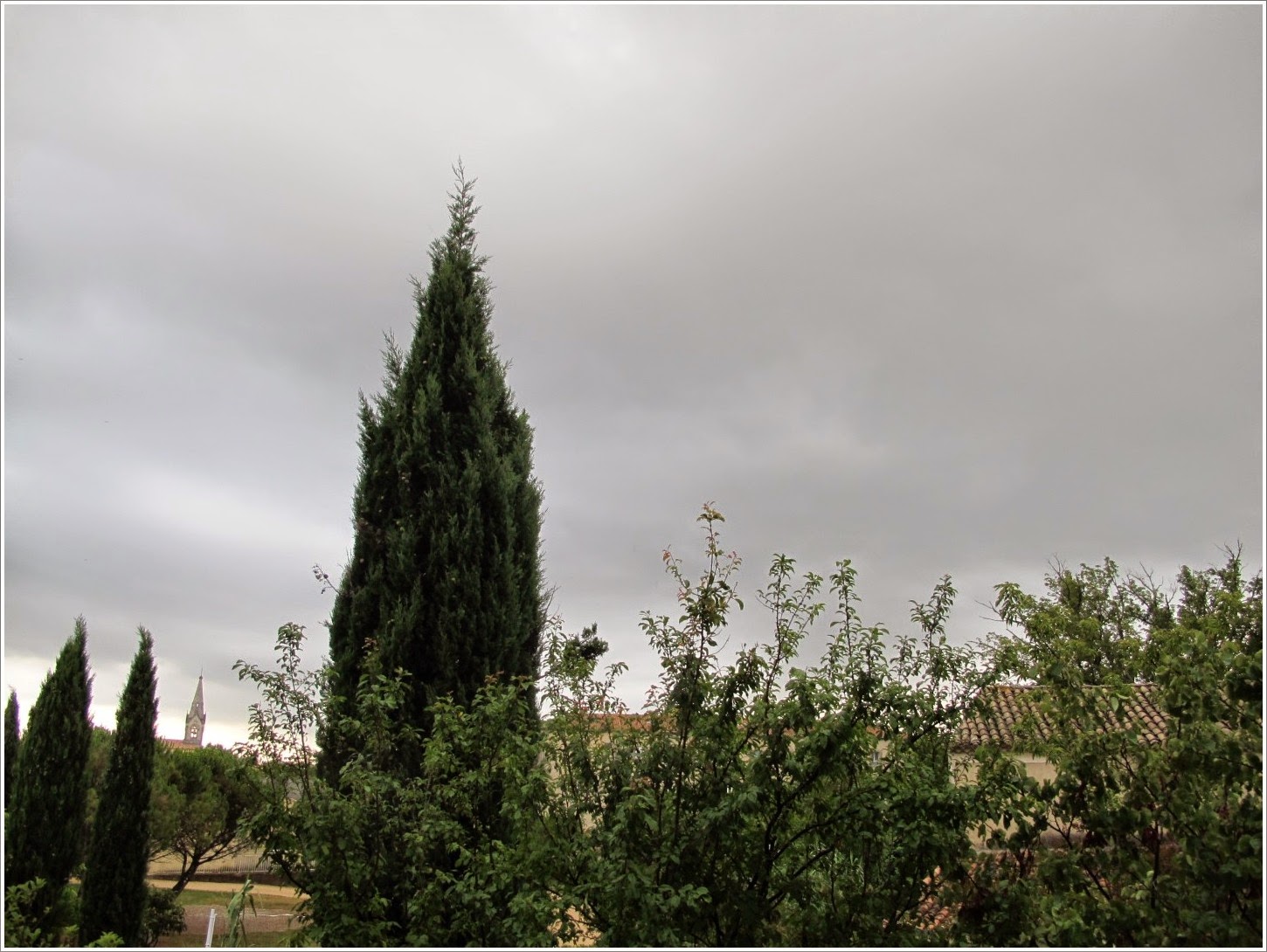 When the storm was over, when the World Cup game between France and Germany was over (sadly, France lost ... the team did not seem to have the fire), and the shouting of crowds was turned off, I heard the murmur. I hear it now, in the bright daylight, but it may be real, because there are people around to make the voices now.

But in the quiet night, there was another deeper, shorter noise that could be a footfall. Or a balky door moaning. Just every once in awhile, but it did bring a little frisson to my scalp.

There was one more big deluge later in the evening, sans thunder. It just swept in, clattered a few moments, then stopped as suddenly as it had begun.

Eventually I discovered that when I moved my rubber-soled shoe ever so slightly on the wood floor, it made the little moan. That settled, I decided it was safe to go to bed, so tromped upstairs with my stuff to go to bed. No rain had come in my open window and I sat down on the edge of my bed with my little trip itinerary, planning to enter how many steps I'd walked during the day. The next thing I knew, one of the housemates poked her head in my open door, catching me just awakening, on hearing noises outside, out of a sound sleep, still dressed, itinerary book and pen in hand, footsteps unentered.

"Boy, it must have really rained here," she said.