The Edge of Day and Night

The Earth's terminator
Quoting from Wikipedia:

The cats believe that if they lie on top of my stuff, they can keep me from packing, and, therefore, from leaving. Henley actively covers stuff with his body. Jean-Luc has turned his back on me and pouts from his little kitty nest. 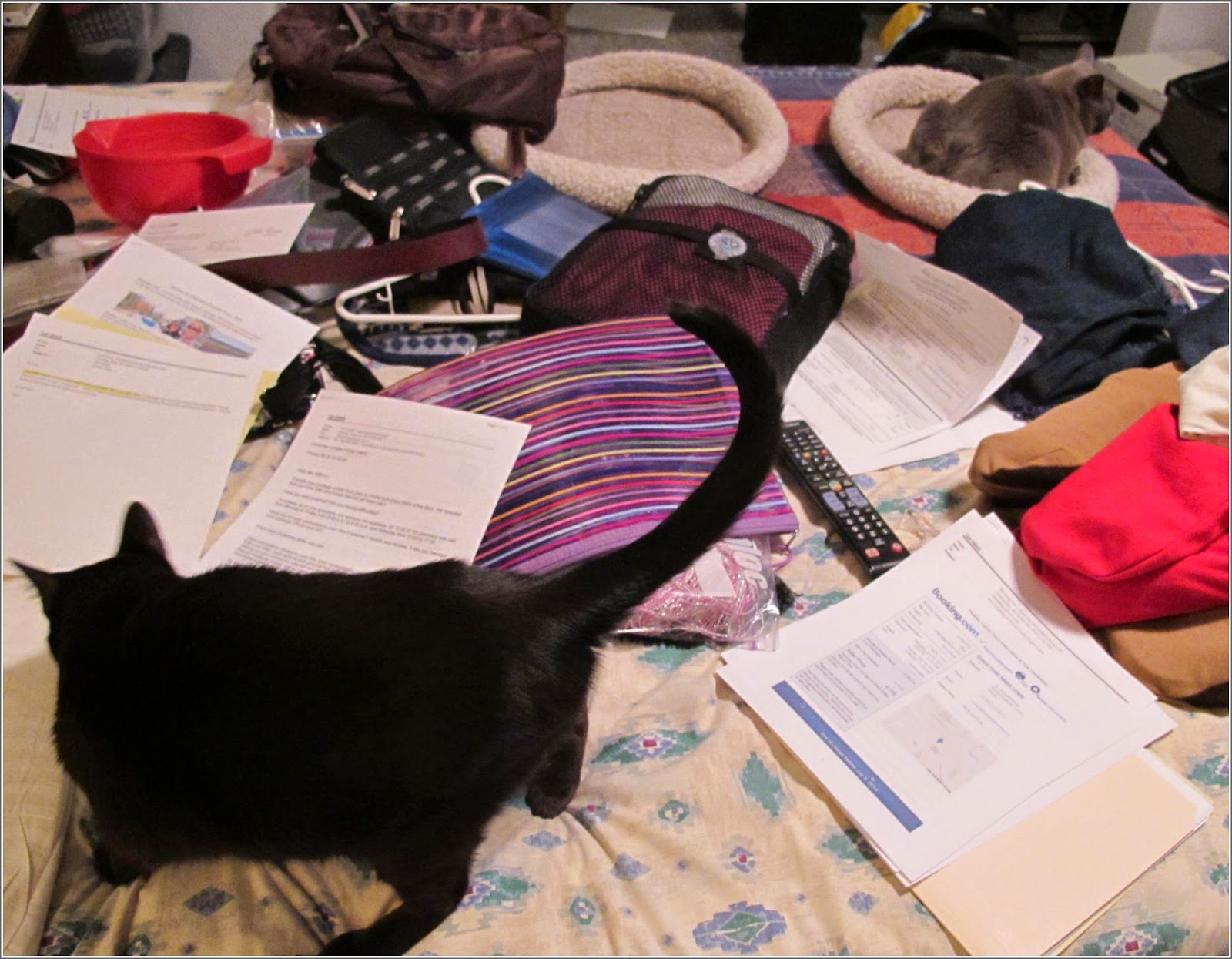 Despite their efforts, I'm ready to roll out the door with suitcase stuffed. To the gills. With the extension fully unzipped. This is unacceptable. There is no room to bring anything back from France. I'm not a very big touristic shopper, but, really? Nothing? 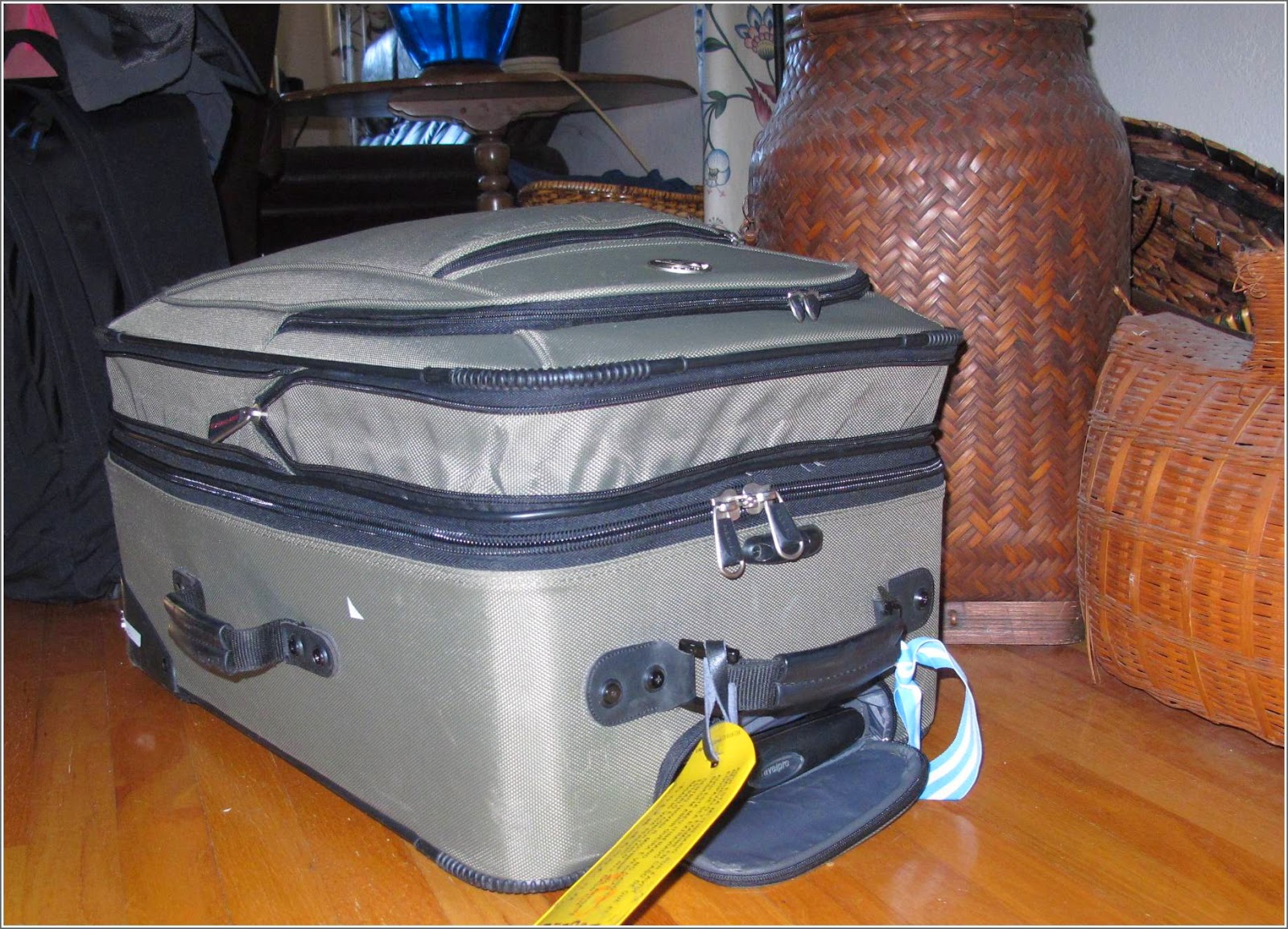 I take its stuffed-to-the-gills self down to Sister and Brother-in-Laws' house, where I will spend the pre-flight night to get a jump on the morning trip to the airport. In the scant moments before I leave their house, I pull out enough stuff to be able to zip up the extension. Ahhh, breathing room.

I get to SFO plenty early to have an easy check in (well, with the usual complete pat-down and seizure of my tiny Weatherman tool which I thought I had put in my packed baggage) and time for some lunch. I'm eating in the North Food Court in the International terminal while streams of passengers queue up for their security checks at the "other" terminal. I have traveled with friends who traveled to the same destination as I, except on a different airline, who went to this "other" terminal. 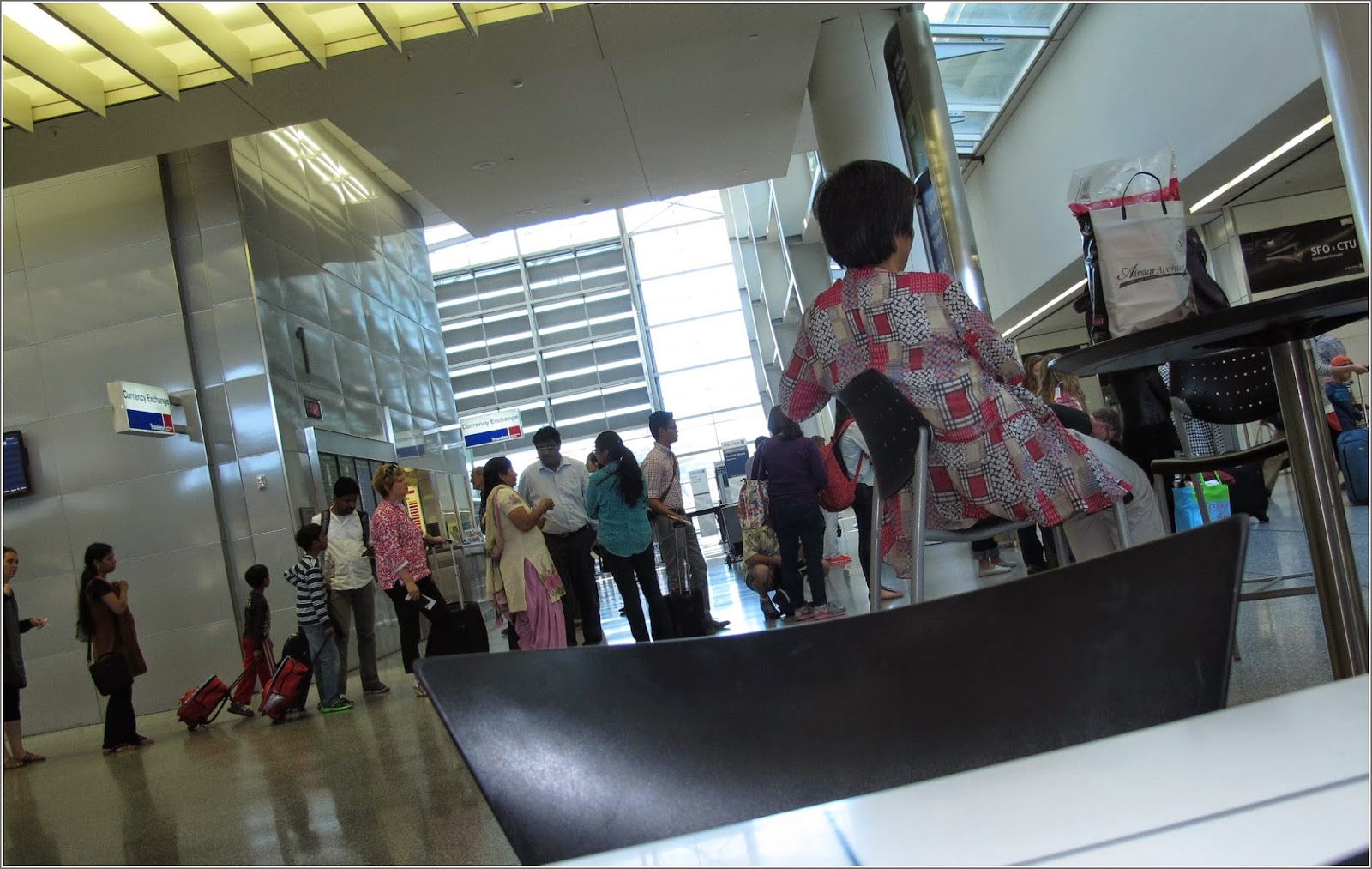 I have a Sky Priority ticket, which gets me into a shorter line for boarding. Despite the name of the blog, I have forsaken Sardine Class for Premium Economy, which at the very least gets me my own two armrests and knees not scrunched against the seat ahead of me.

The overhead space isn't all that different. 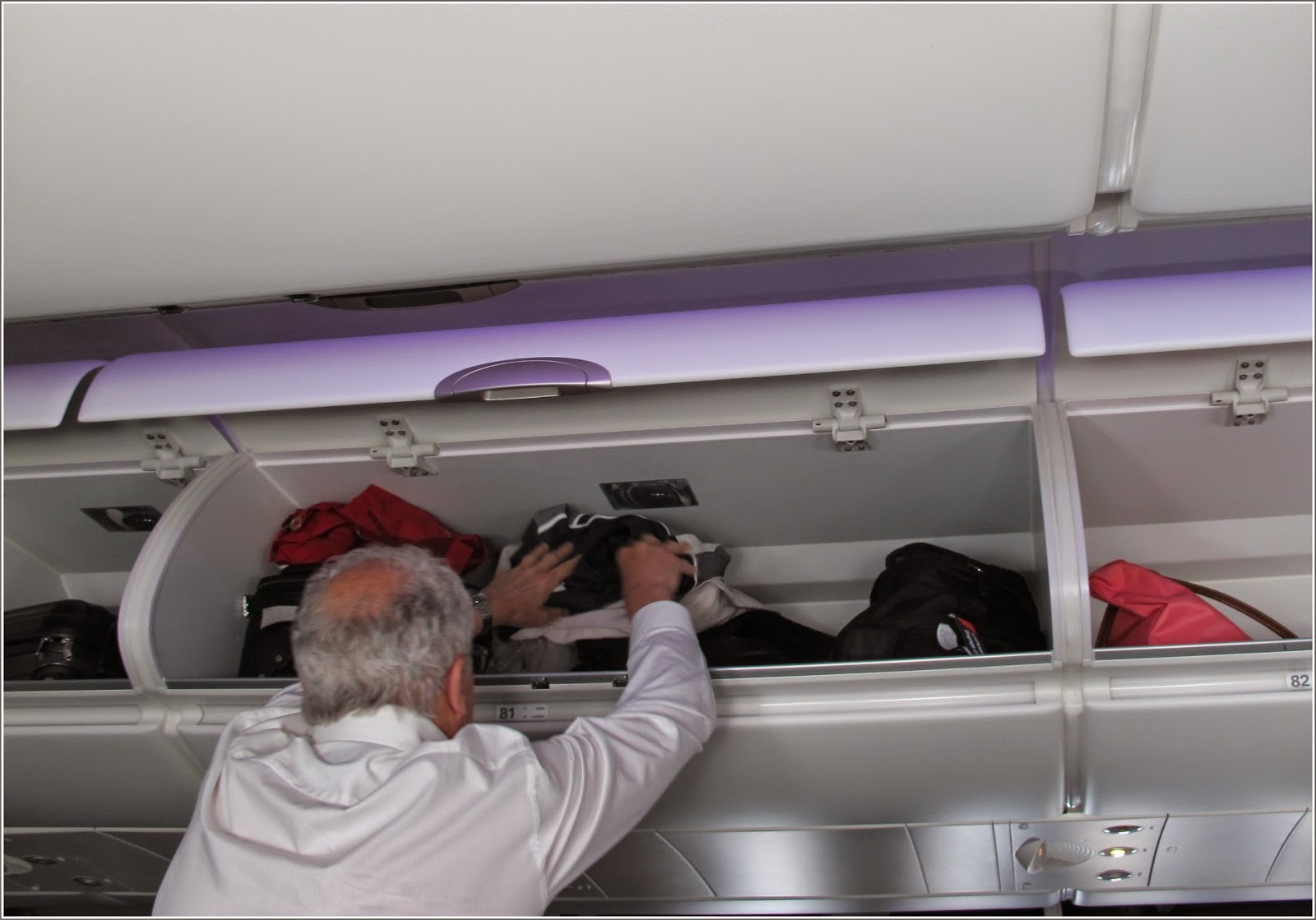 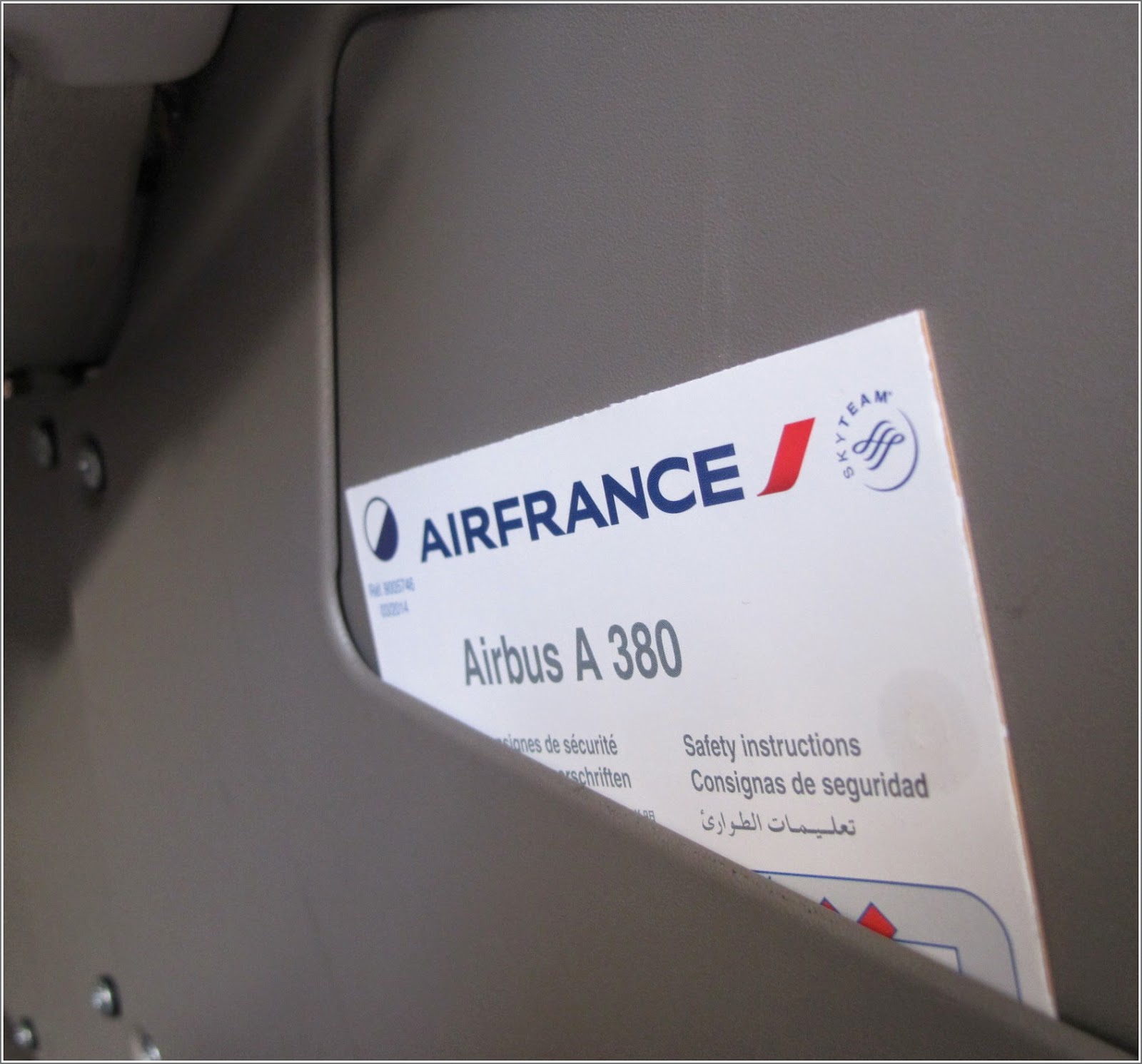 There's a tail-mounted camera that shows the top of the plane, the wings and what's ahead. This is a shot of the screen at the front of the cabin, but three feeds are available on the seat back entertainment center: tail, nose and out to the sides. 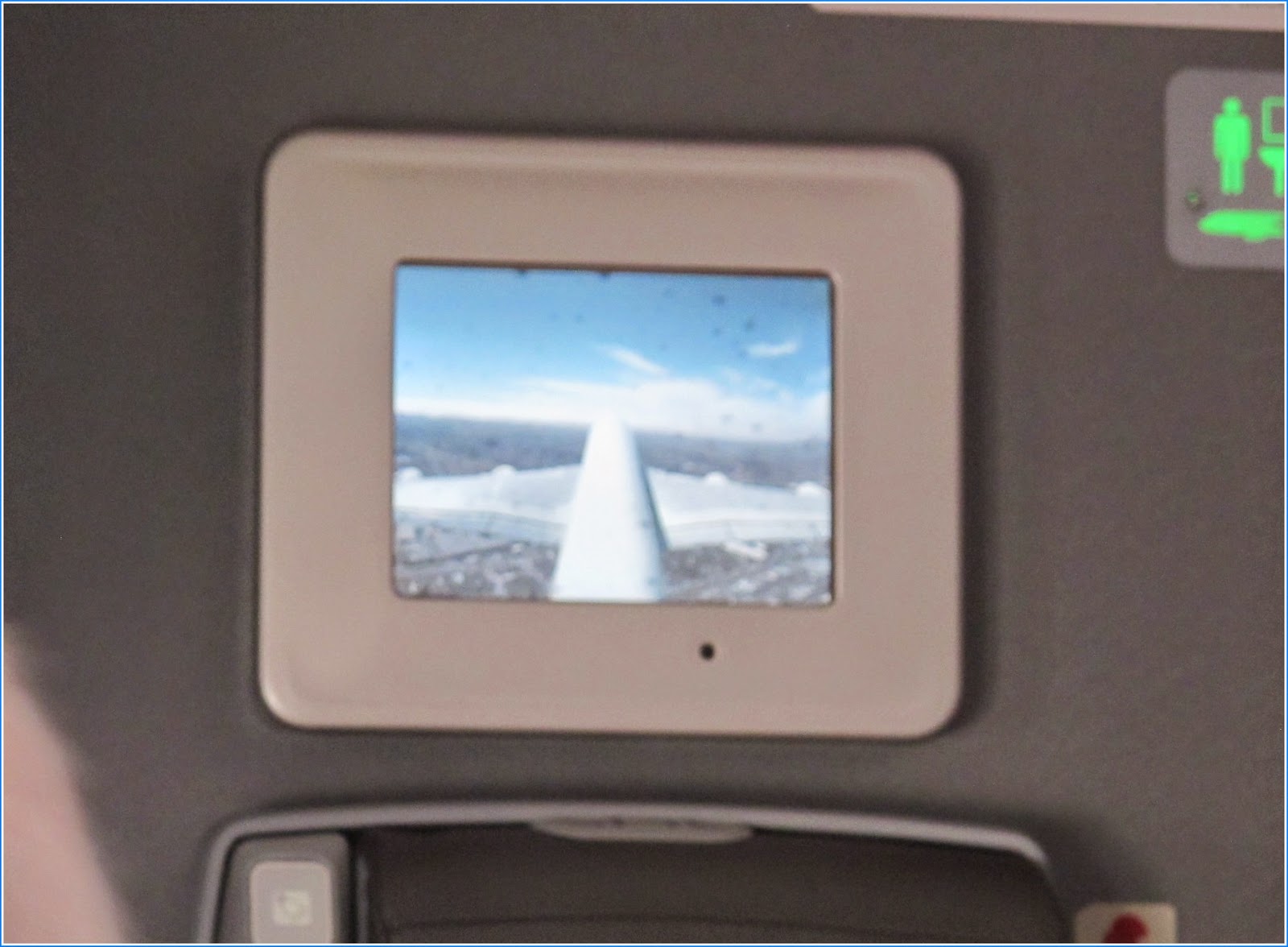 I have a window seat with a view out along the left wing. 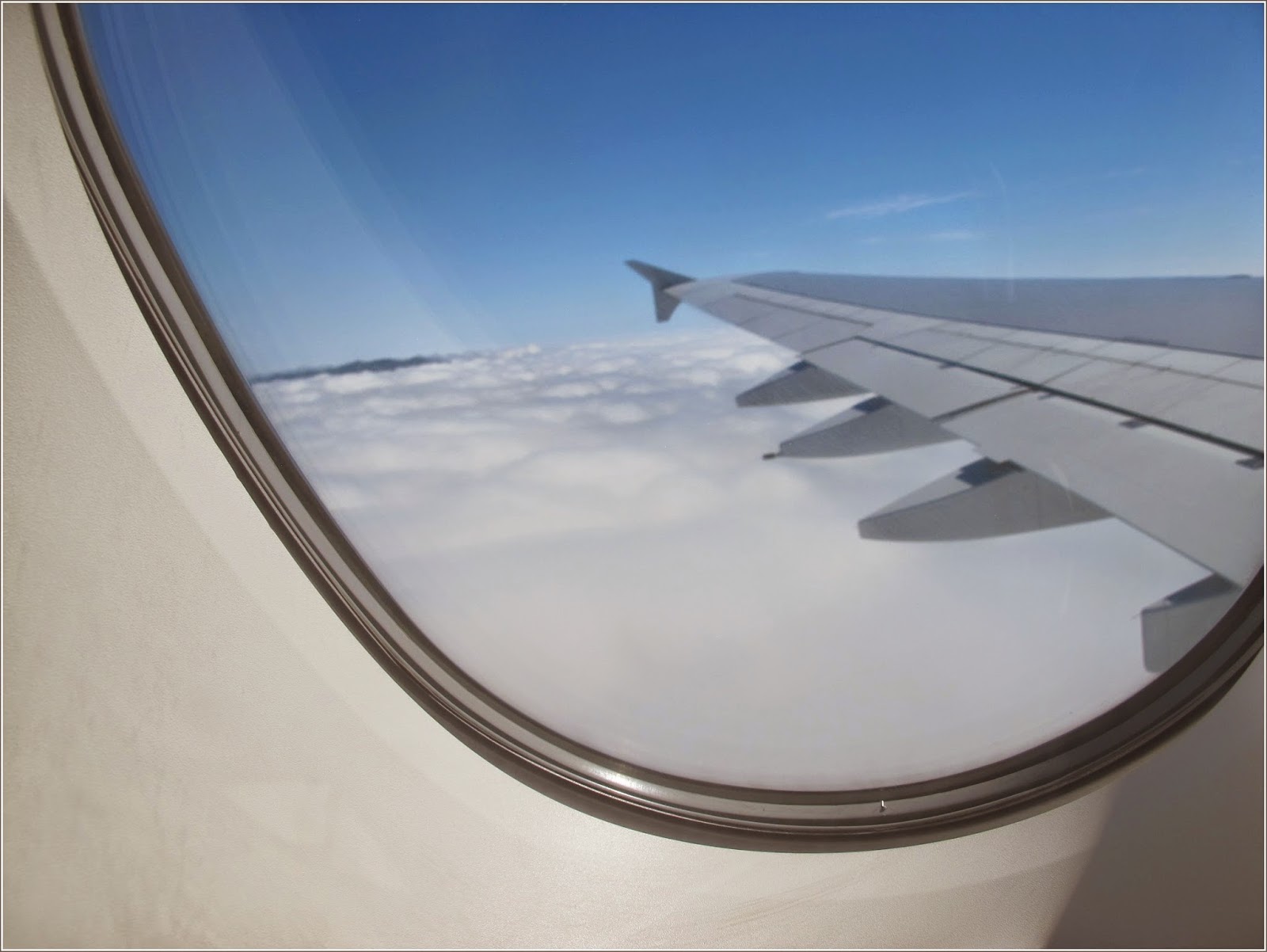 But more than watching the camera shots outside, I like to watch the graphic progress of the flight in a rotating set of maps, shown in various scales. This map shows the flight of the plane in relation to day and night. The time on the ground is approaching midnight on this map. Our giant aircraft's length is half the width of Canada and we're flying at the top of night. Or so my brain seems to think. But someone sitting ahead of me opens a window shade briefly and light flashes across the cabin. 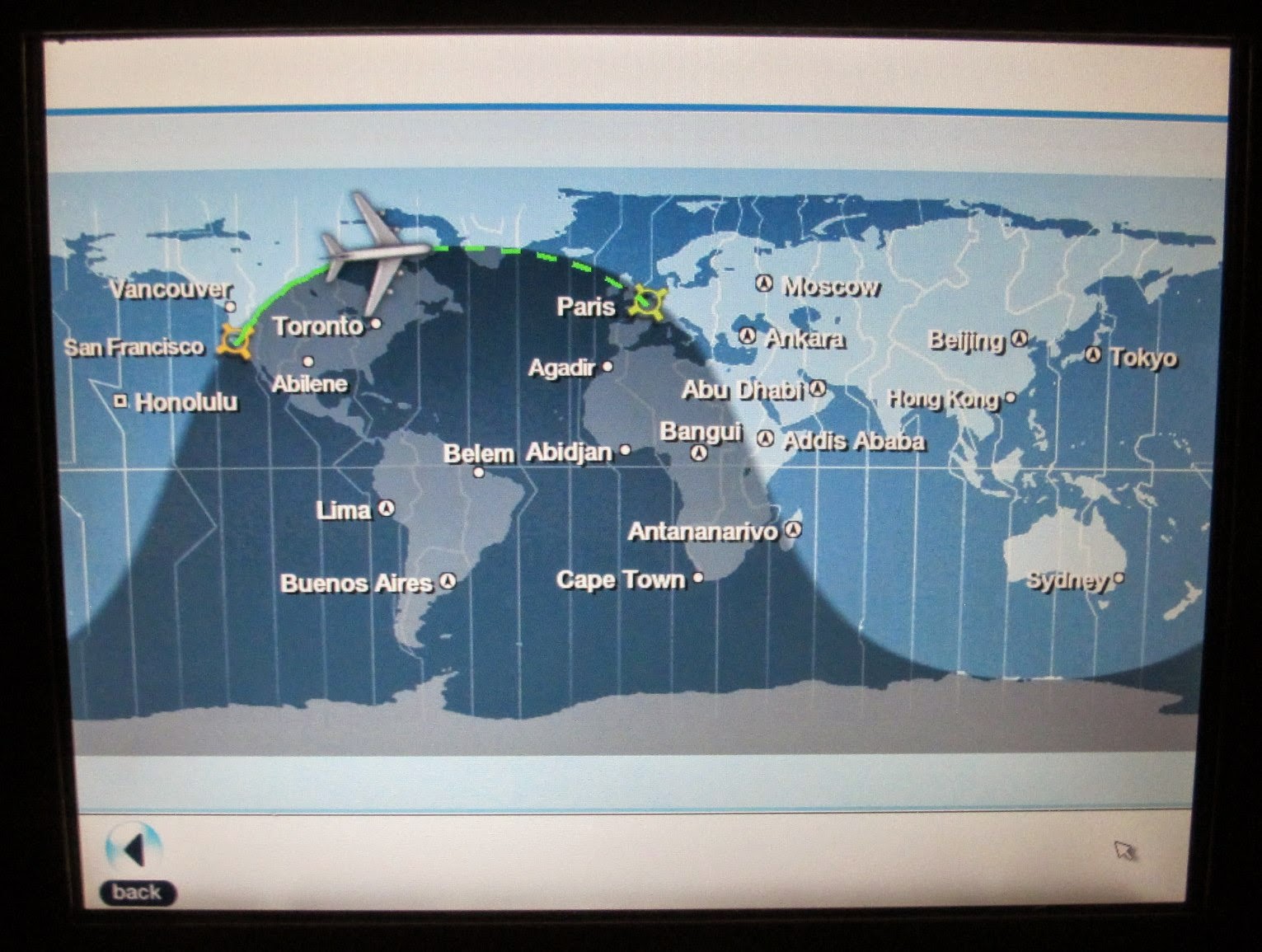 I peek out my window and I see sunshine on the land over to my left. It's more clearly light hitting land than it appears in the photo below. It continues like this, for each peek I take out of the window. I track a little longer on the map above and find we are tracking right along the Earth's terminator. It's the Summer Solstice and we're looking at land above the Arctic Circle. They've got some Midnight Sun going on up there. 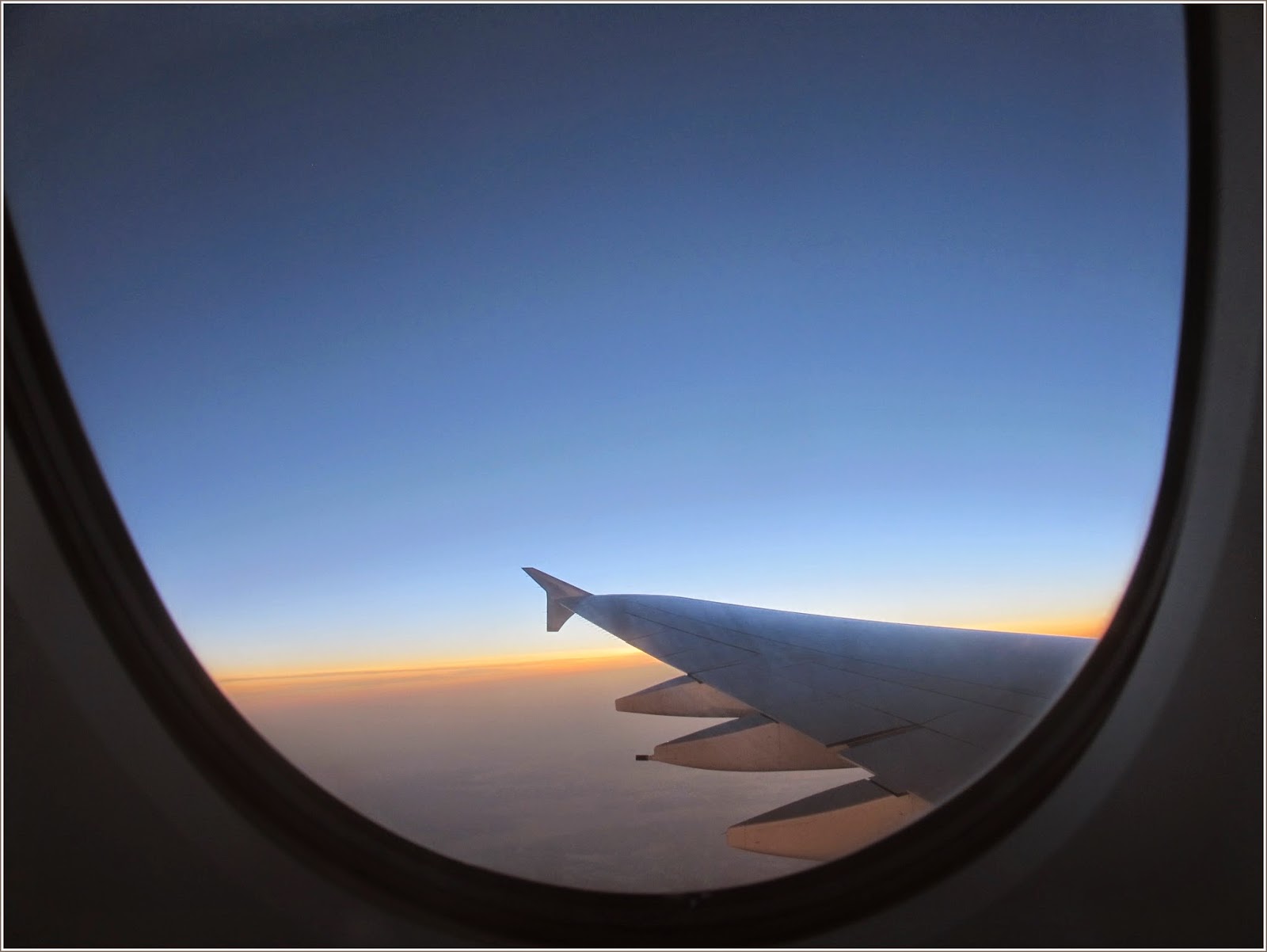 I check our tail camera and the aircraft is illuminated by the sun on one side, in darkness on the other. I don't know about you, but I found this way cool. Gosh, you can even see the curvature of the Earth. 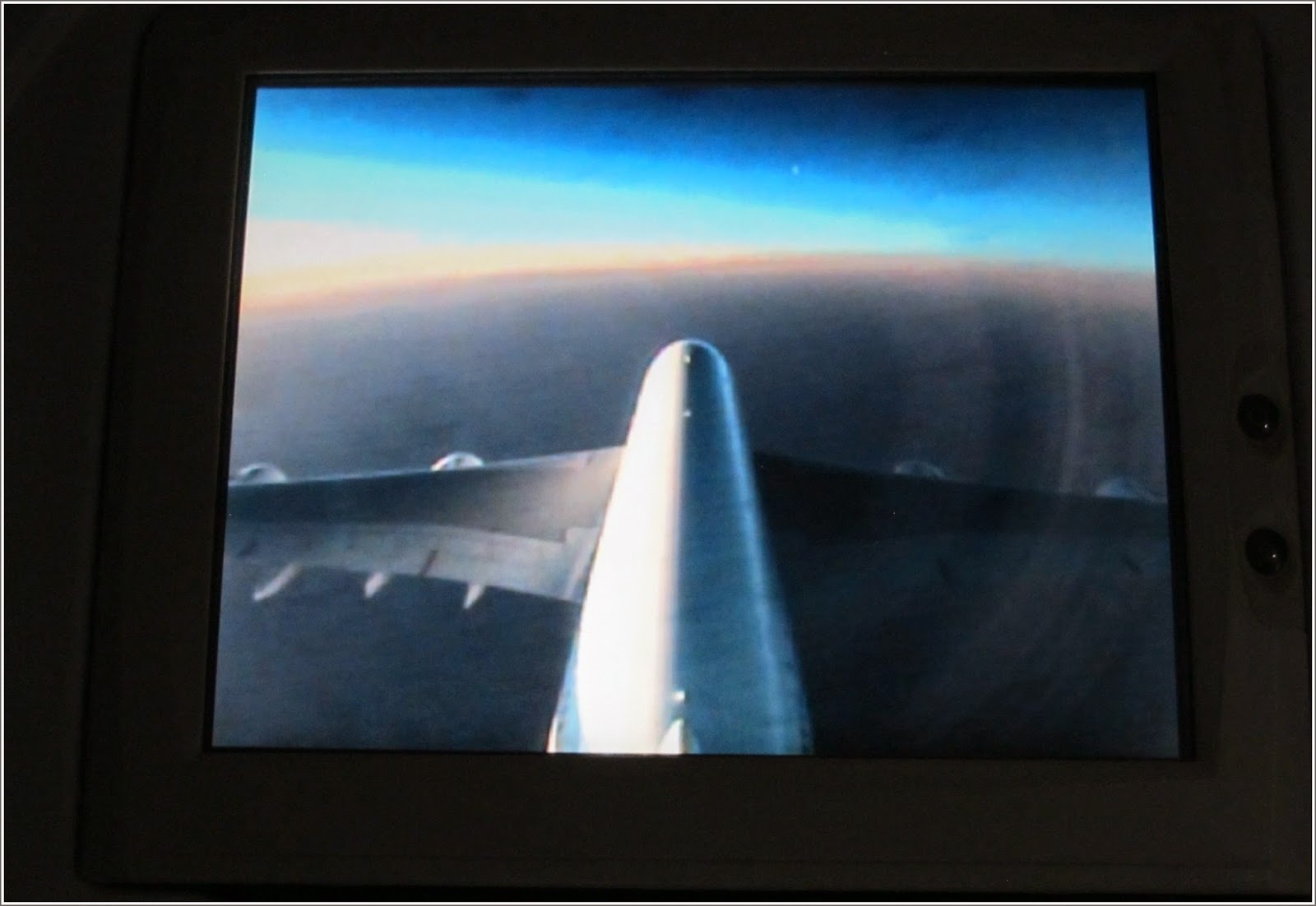 I get a little shut-eye, then wake up when the flight attendants start breakfast service as we approach Paris. I skipped dinner the night before -- the lovely sandwich at the airport before departure hadn't treated my stomach kindly, but now I'm starved. They never leave enough time to do anything but gobble down the food on the tray.

Meanwhile, I'm comparing the view out the window with the tail camera view. 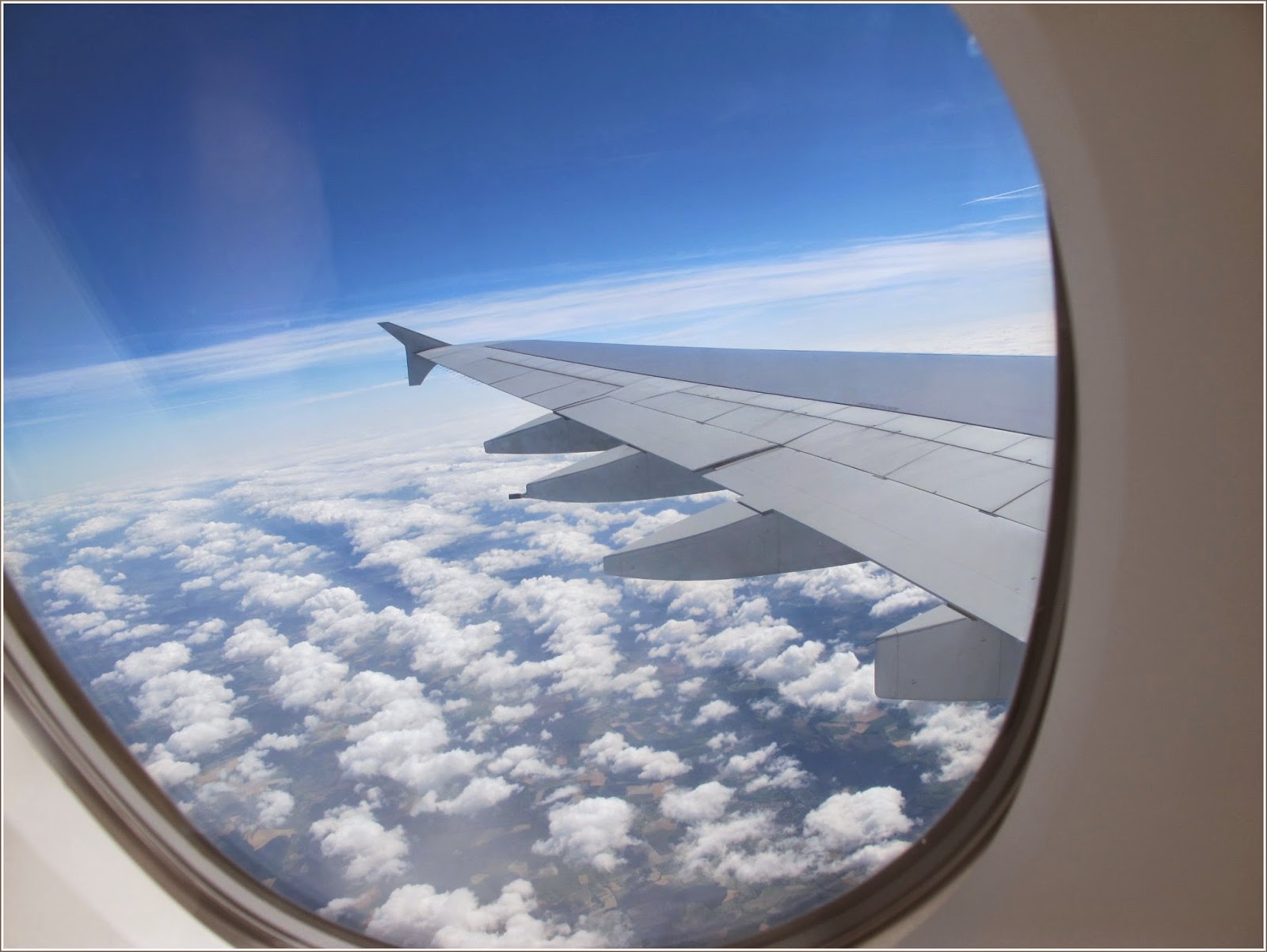 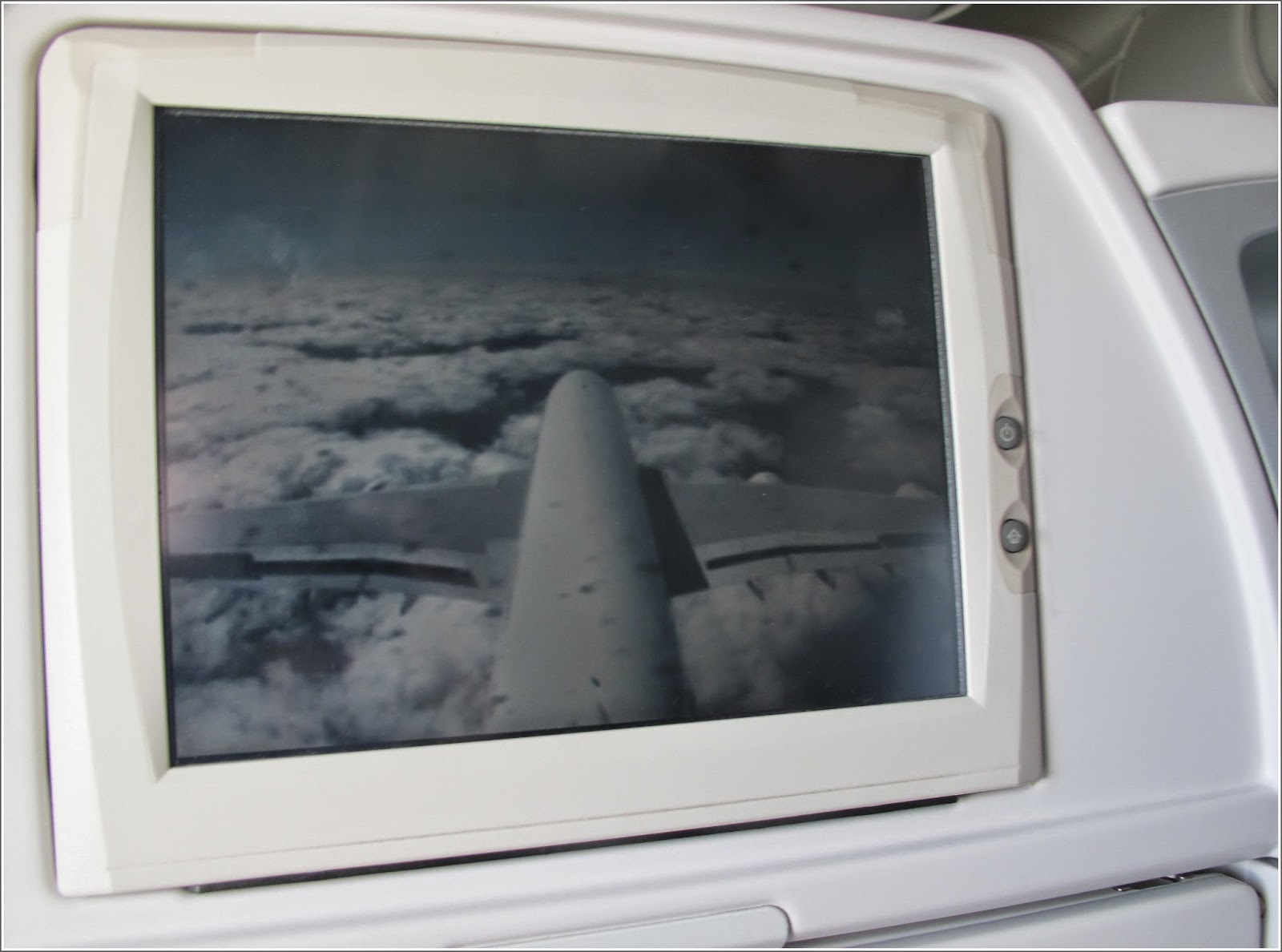 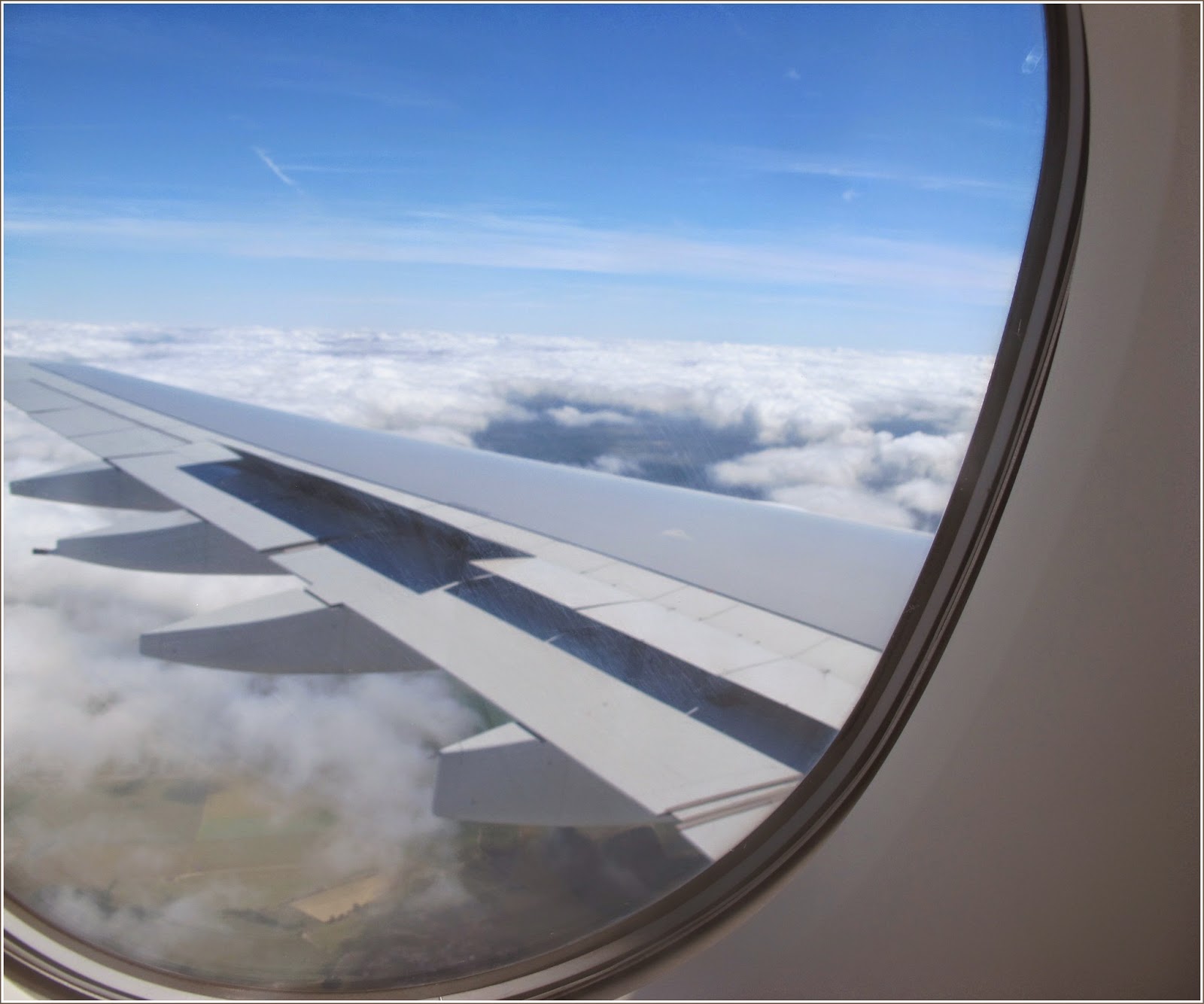 Almost in. I gather my stuff together for a sprint to the domestic terminal at Paris Charles de Gaulle airport for the flight to Marseille. 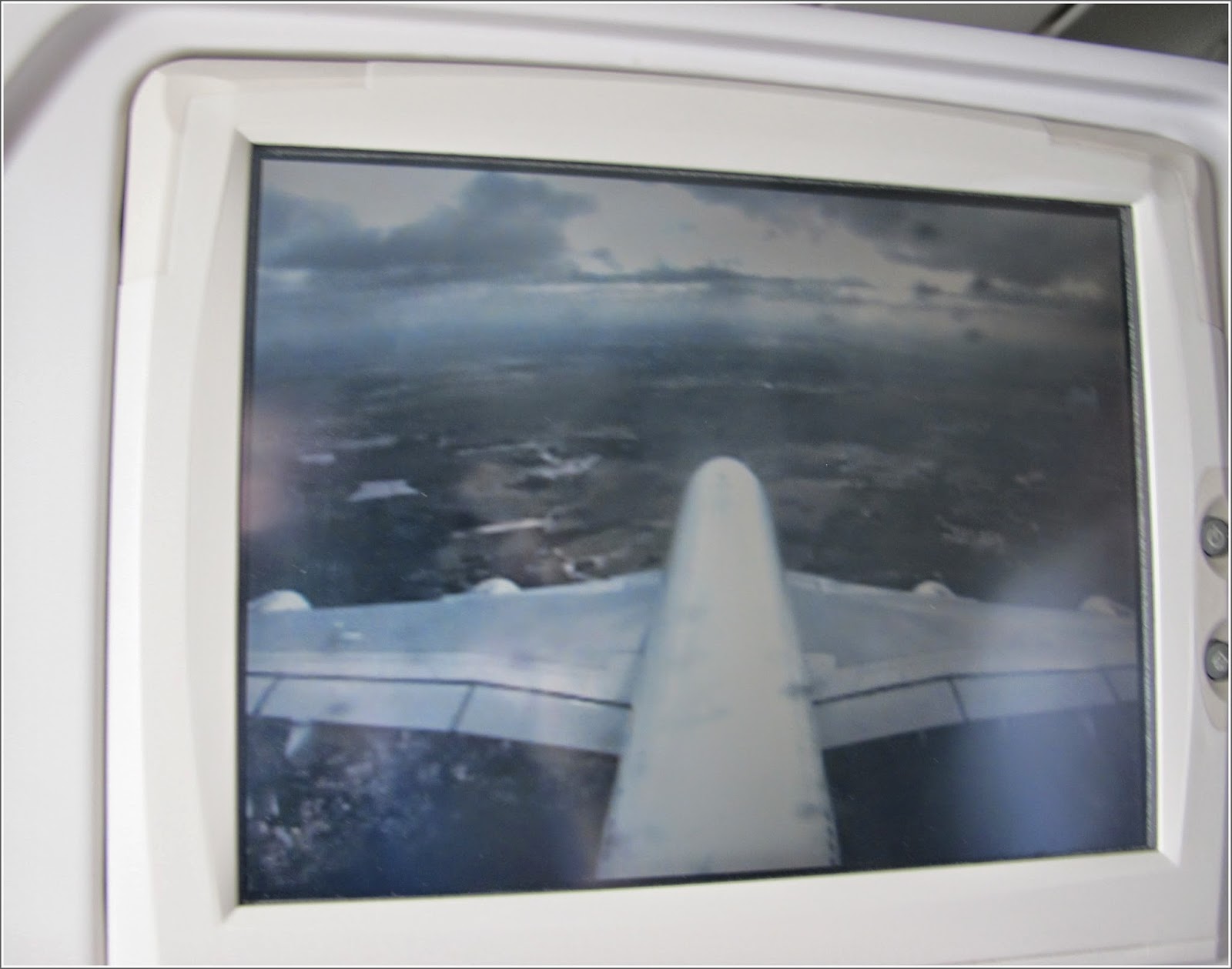 The connection is made smoothly and I'm on board a smaller aircraft, in a middle seat between two men.

Lisa, one of our Provence Experience tour leaders, meets me at the airport, and we go to a nearby airport hotel where we'll spend the night. The other leader and another driver will arrive later, and tomorrow, the rest of the group will be collected from planes, trains and automobiles for the start of the tour.