Saturday Night in Our Small Town

The early part of the week had been cool, cold even. And as the days got warmer during the week, the nights still were chilly. 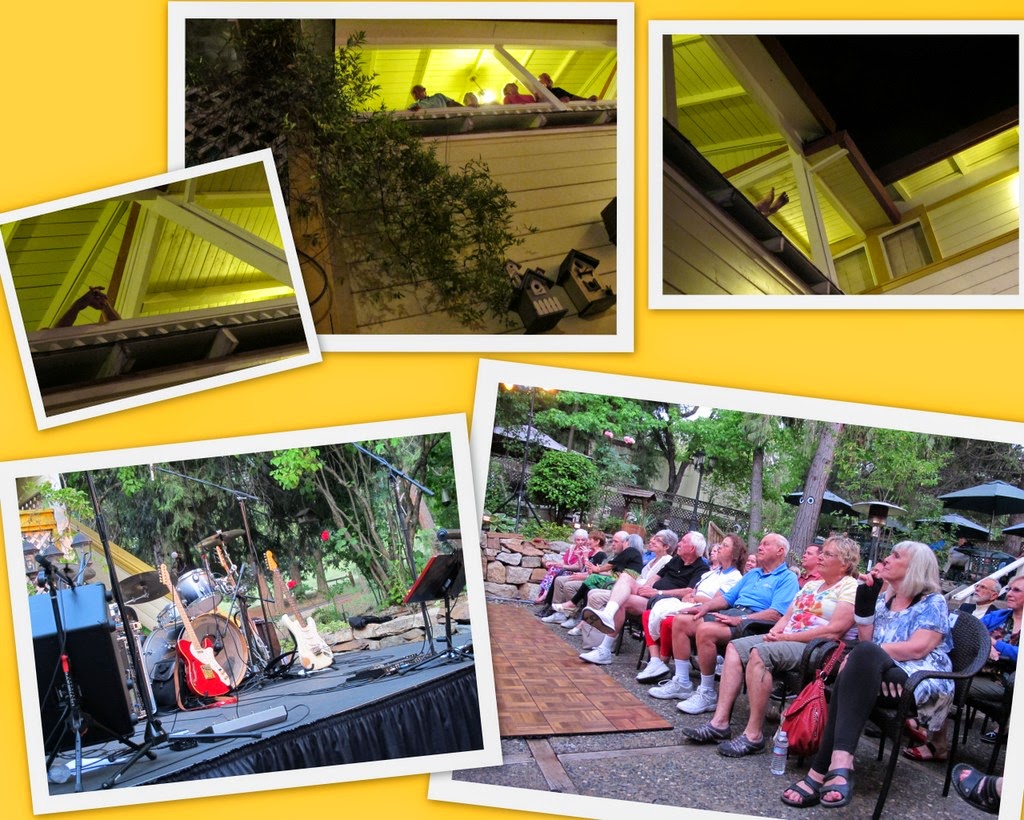 Friends and neighbors gather, a lot of optimists in shorts. Sister, Sister's Friend, Brother-in-Law and I are toting jackets, wary of the cold dampness that can settle on outdoor events, no matter the season. The instruments are tuned and waiting on the platform.  Tiny seat numbers affixed with zip-ties, the chairs are lined up in tight rows on the courtyard floor, even tighter than sardine-class on an airplane. Tables and bar stools on the terrace surround the courtyard, other seats on the hotel balconies overlook the venue. For the life of us, we look like our grandmas and grandpas.

But we're not here for elevator music. We're here for rock'n'roll. We're that demographic. 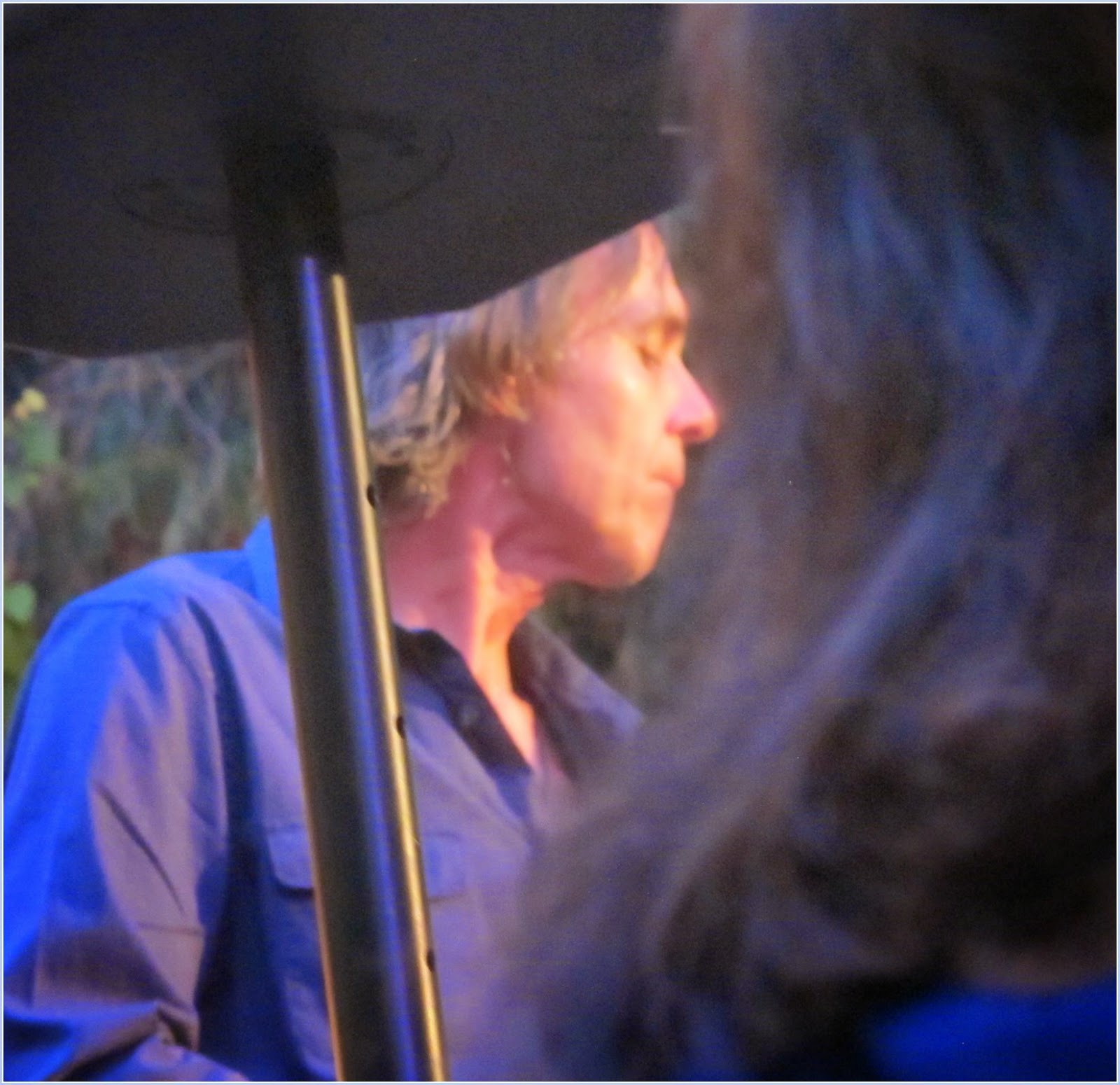 They start with a blast of sound, reverberating out over our little town. Feet are tapping, heads are nodding. I'm fascinated with the low rays of the setting sun turning the bassist's hair to golden fire. 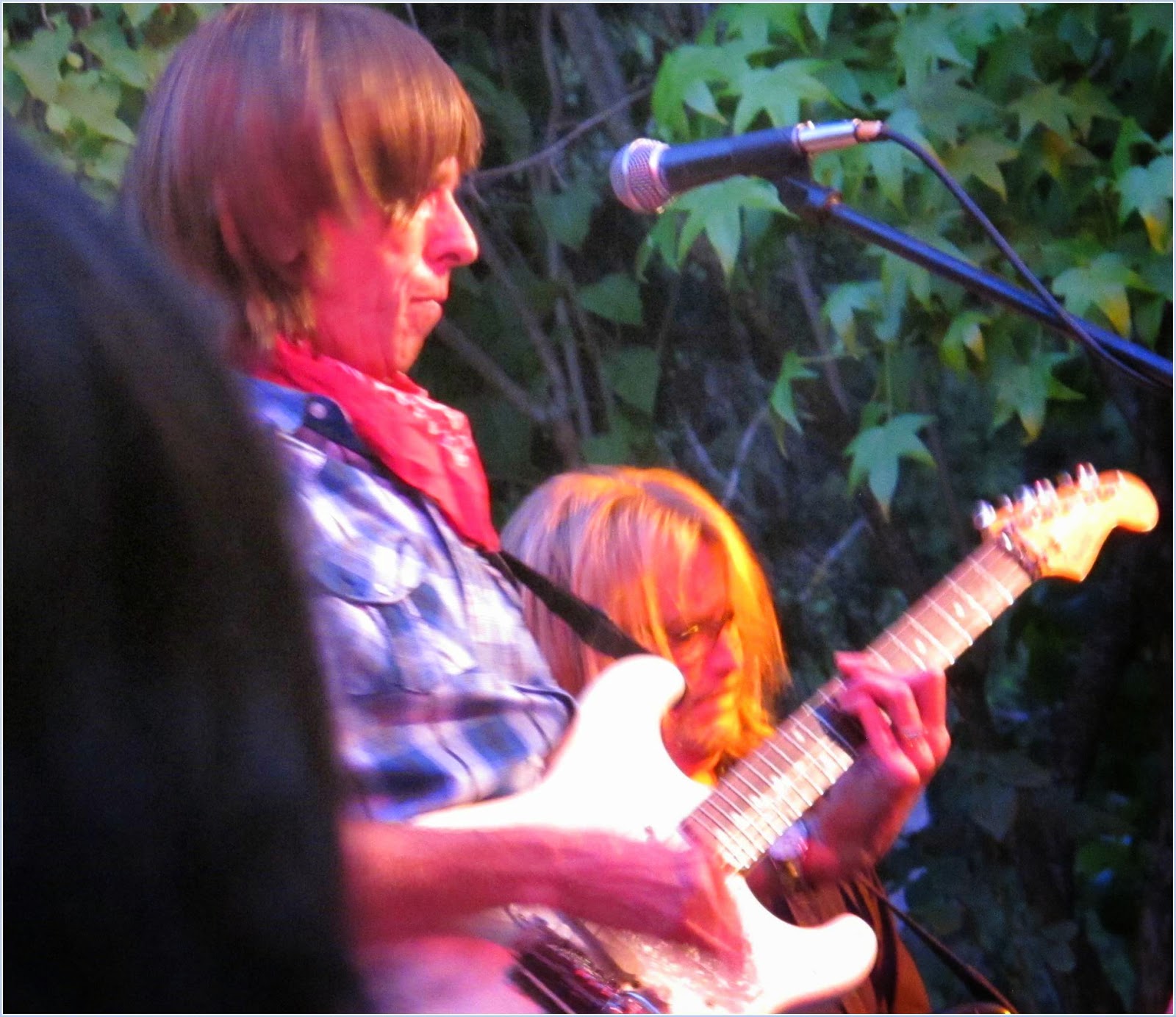 It's The Travelin' Band, rocking tunes by John Fogerty and Creedence Clearwater Revival. 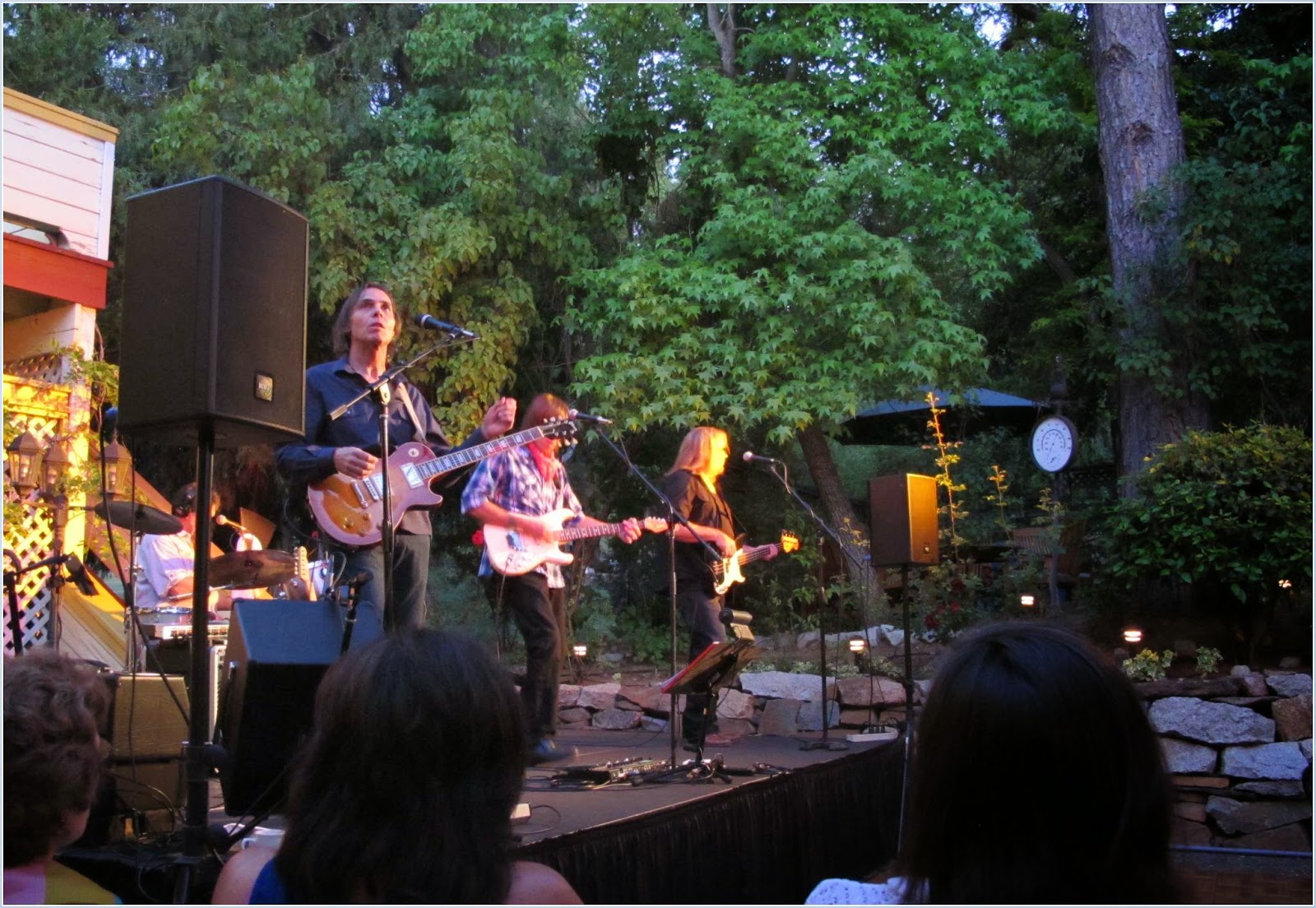 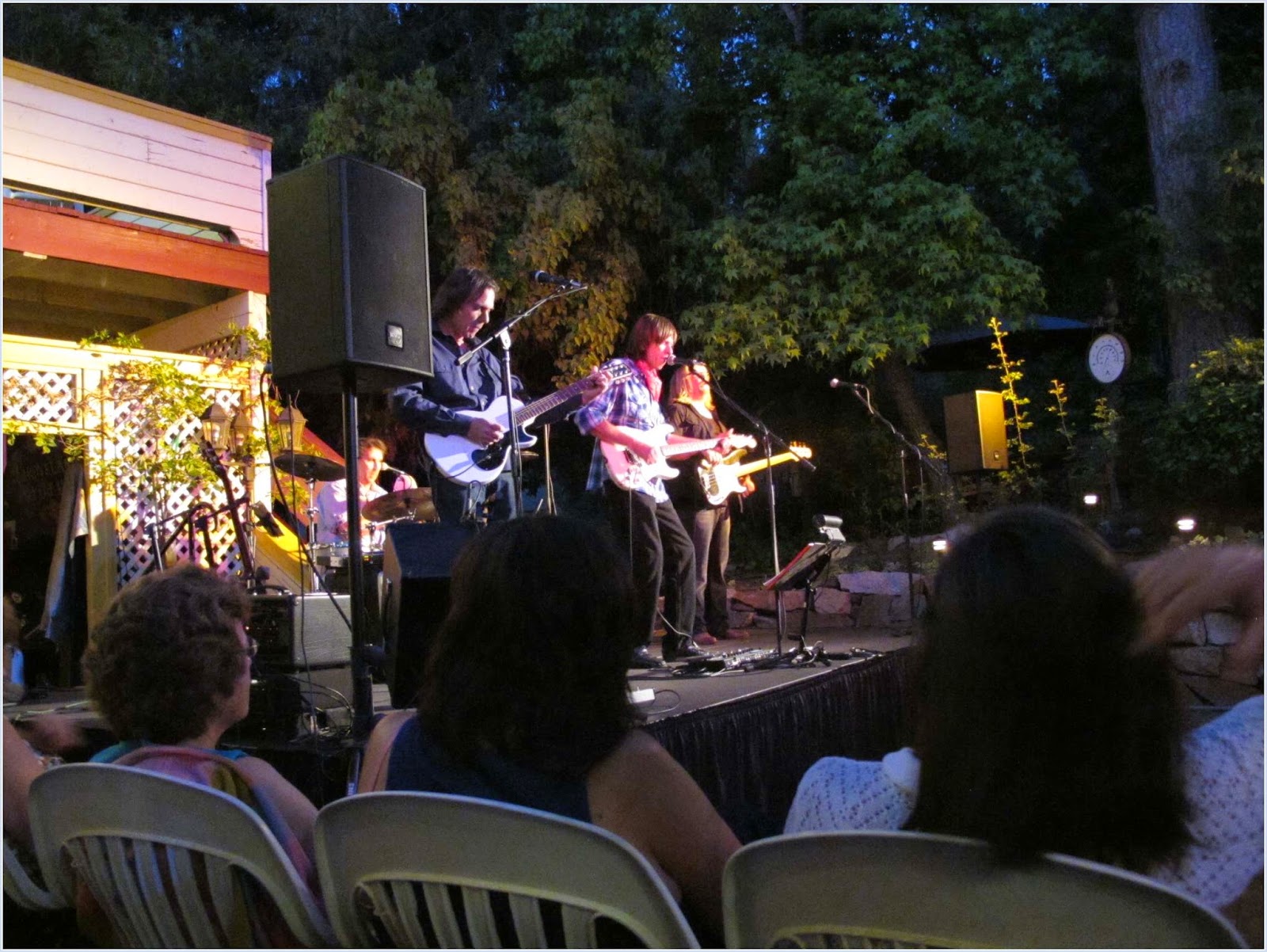 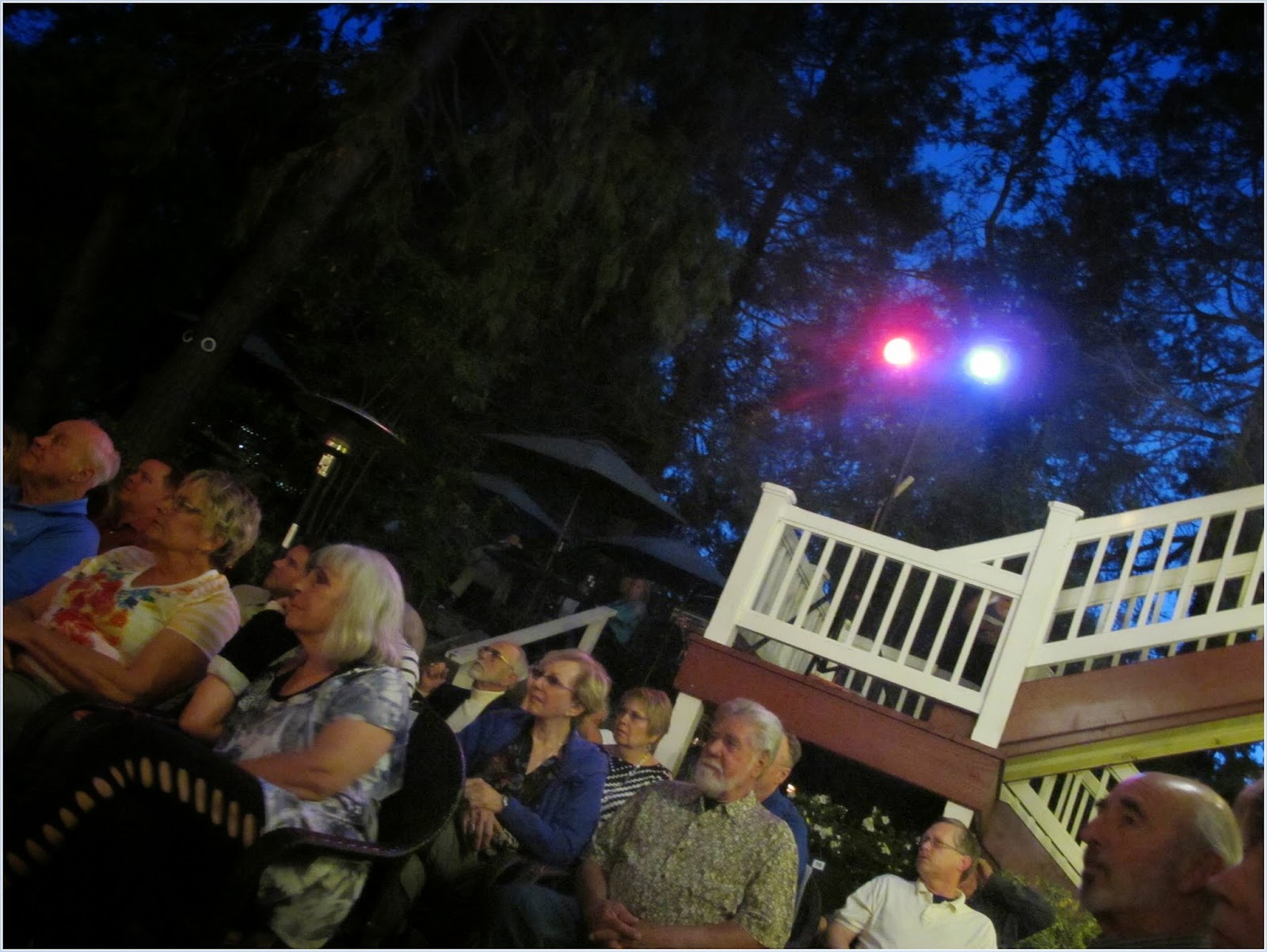 The evening starts out just before sunset. We're surrounded by pine trees silhouetted against pale blue skies. The temperature is still 70° at 8:30. The first star visible is now framed by the pine trees. By 10:00, there is a field of stars out there. (Click it. They may enlarge enough to discern.) 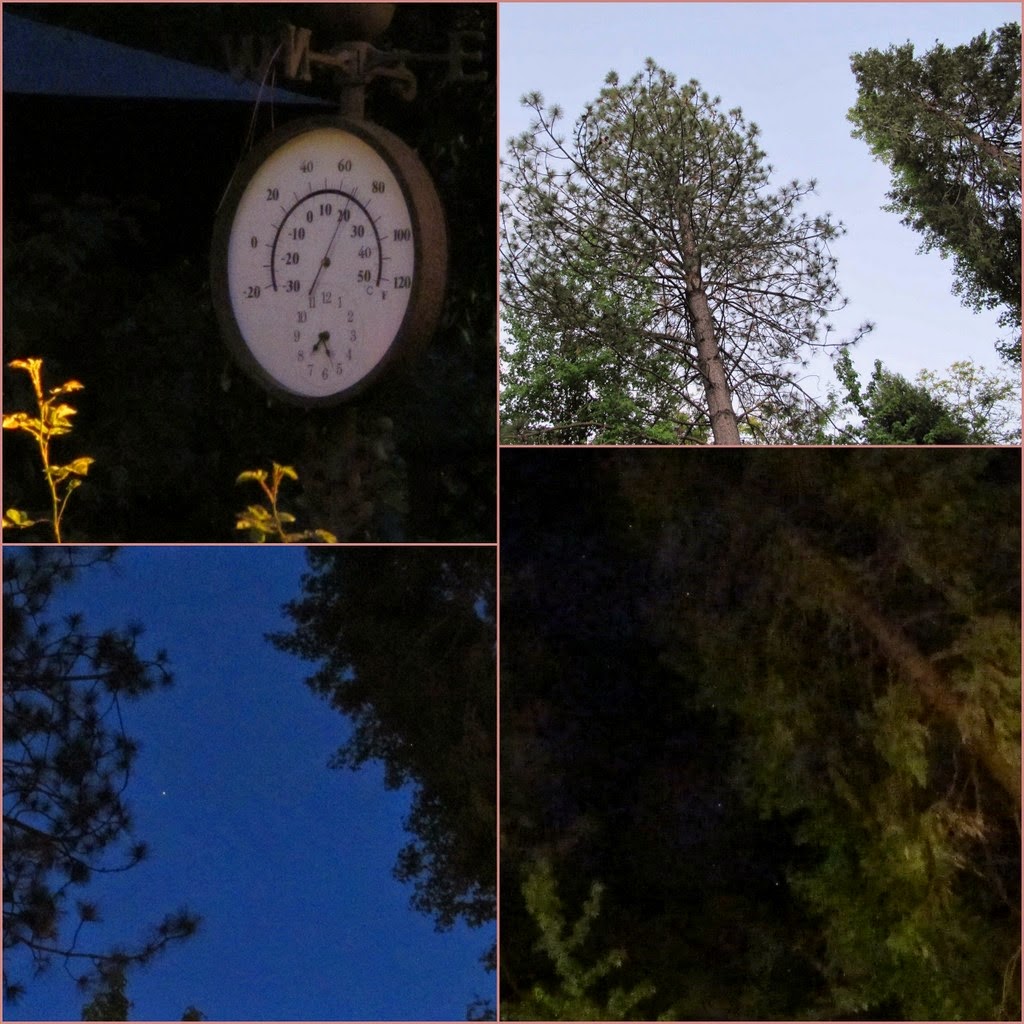 I could only catch occasional glimpses of the drummer from where I sat. 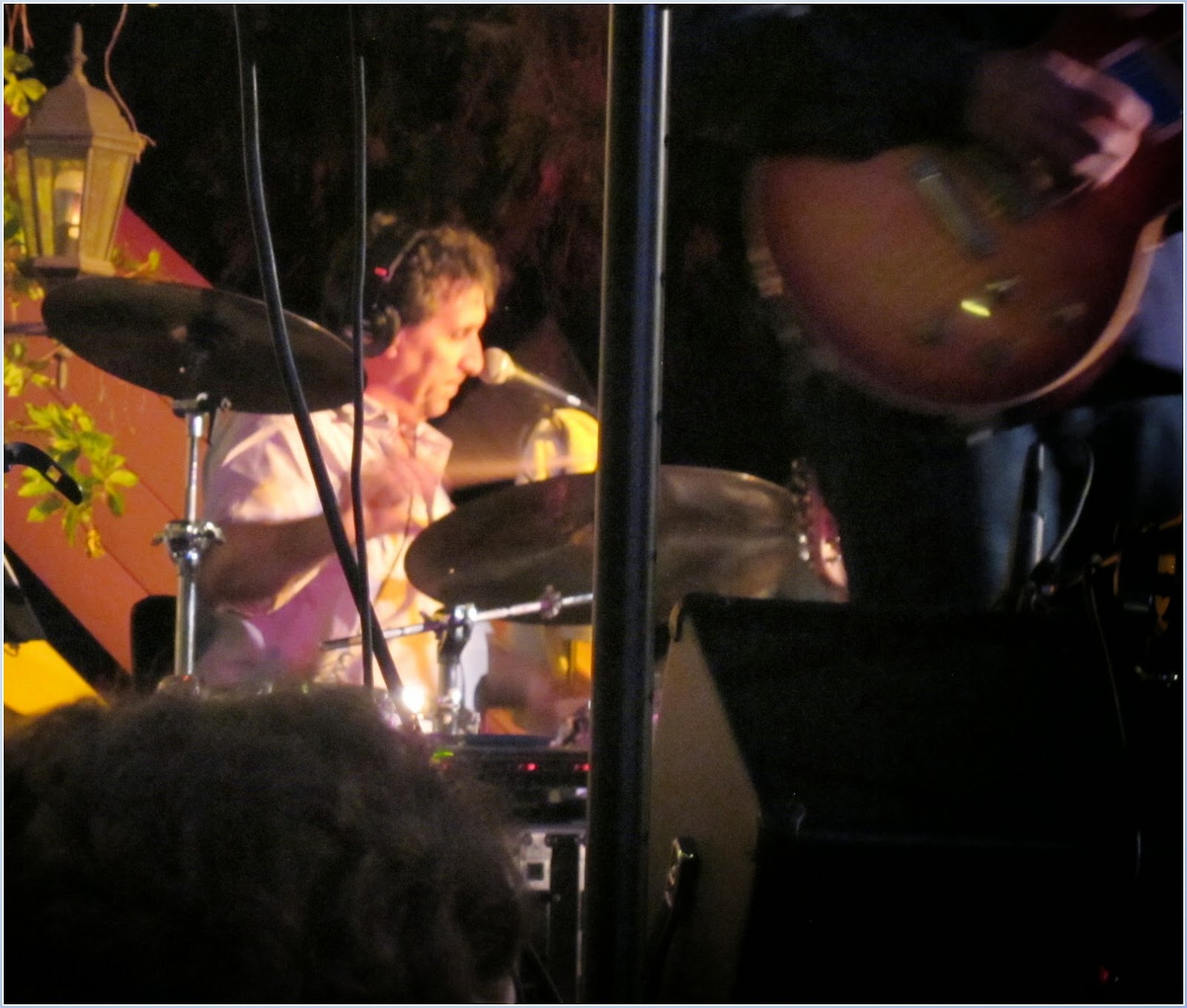 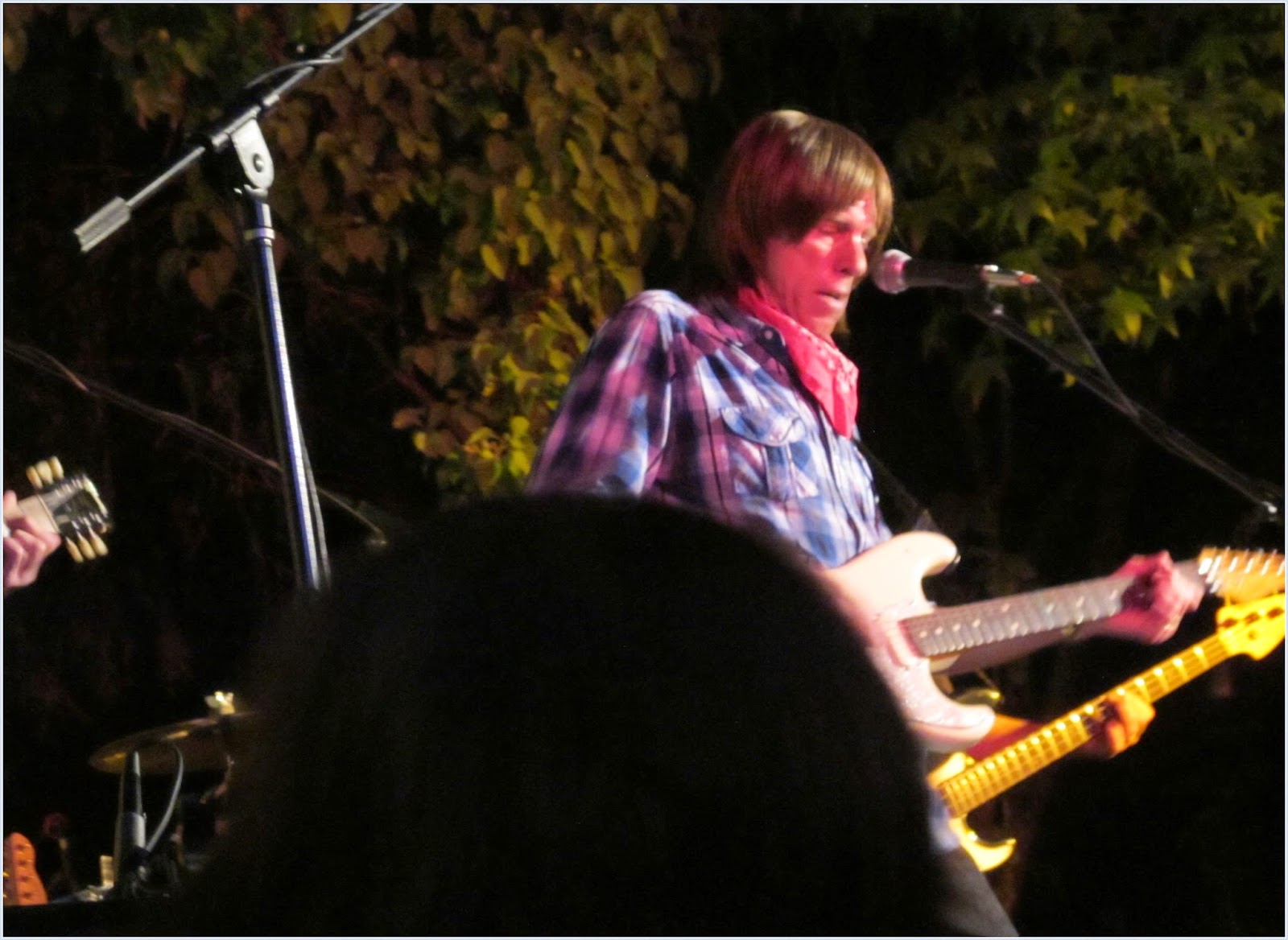 Finally, the first dancers can't hold it back any longer. They break the ice. I'd love to, but I'm kind of a dizzy type and my legs tend toward wobbliness and, thus, collapse. Not only that, I'd had a nice dose of anesthetic for a little procedure the day before, and who knows whether there were lingering effects. 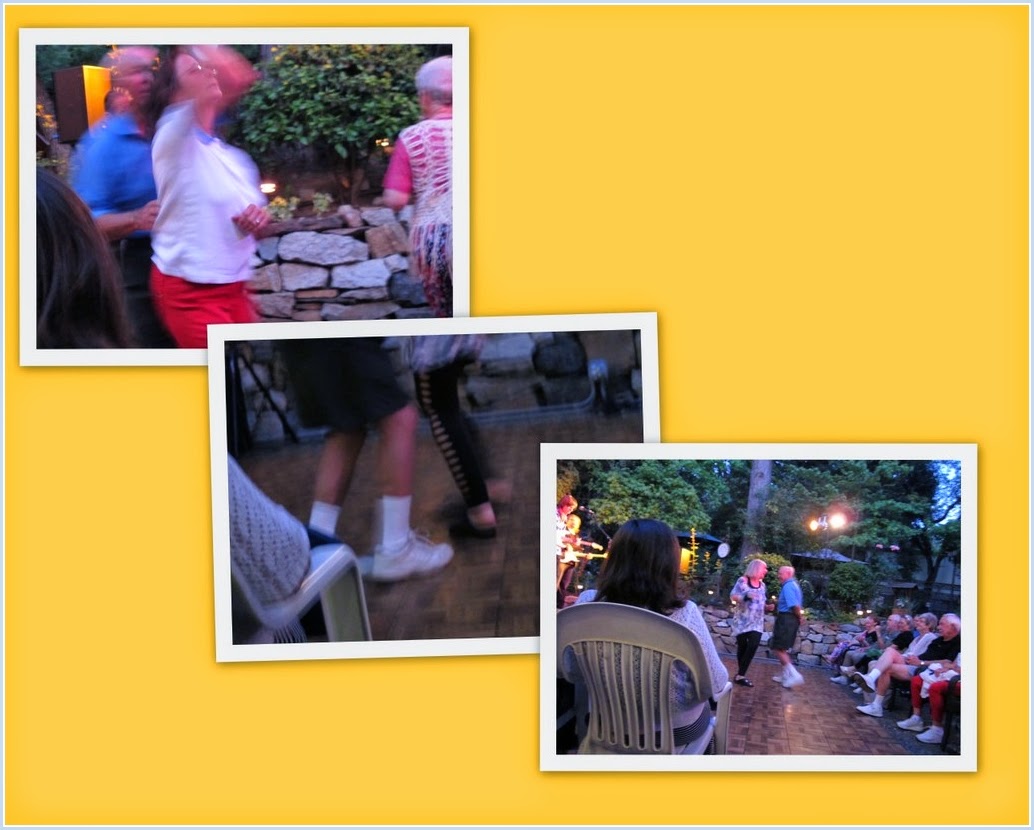 The "John Fogerty" guy almost smiles in this one. 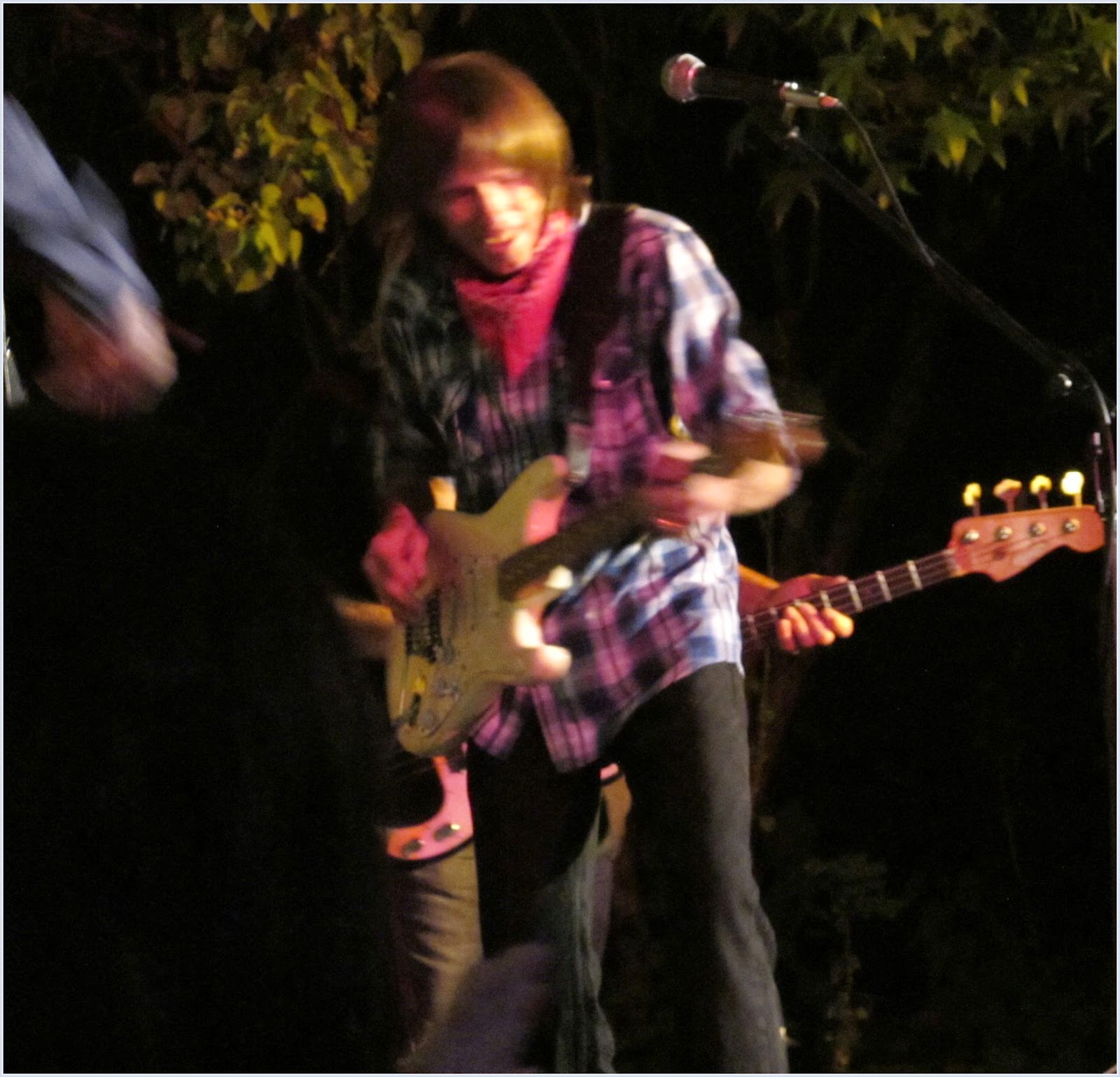 A few people sit impassive, as if dragged along by a spouse or friend against their will (none of these people, I might add . . . I didn't focus in on the sourpusses).  I'd be the sourpuss if I were sitting through a genre of music I'm not fond of. 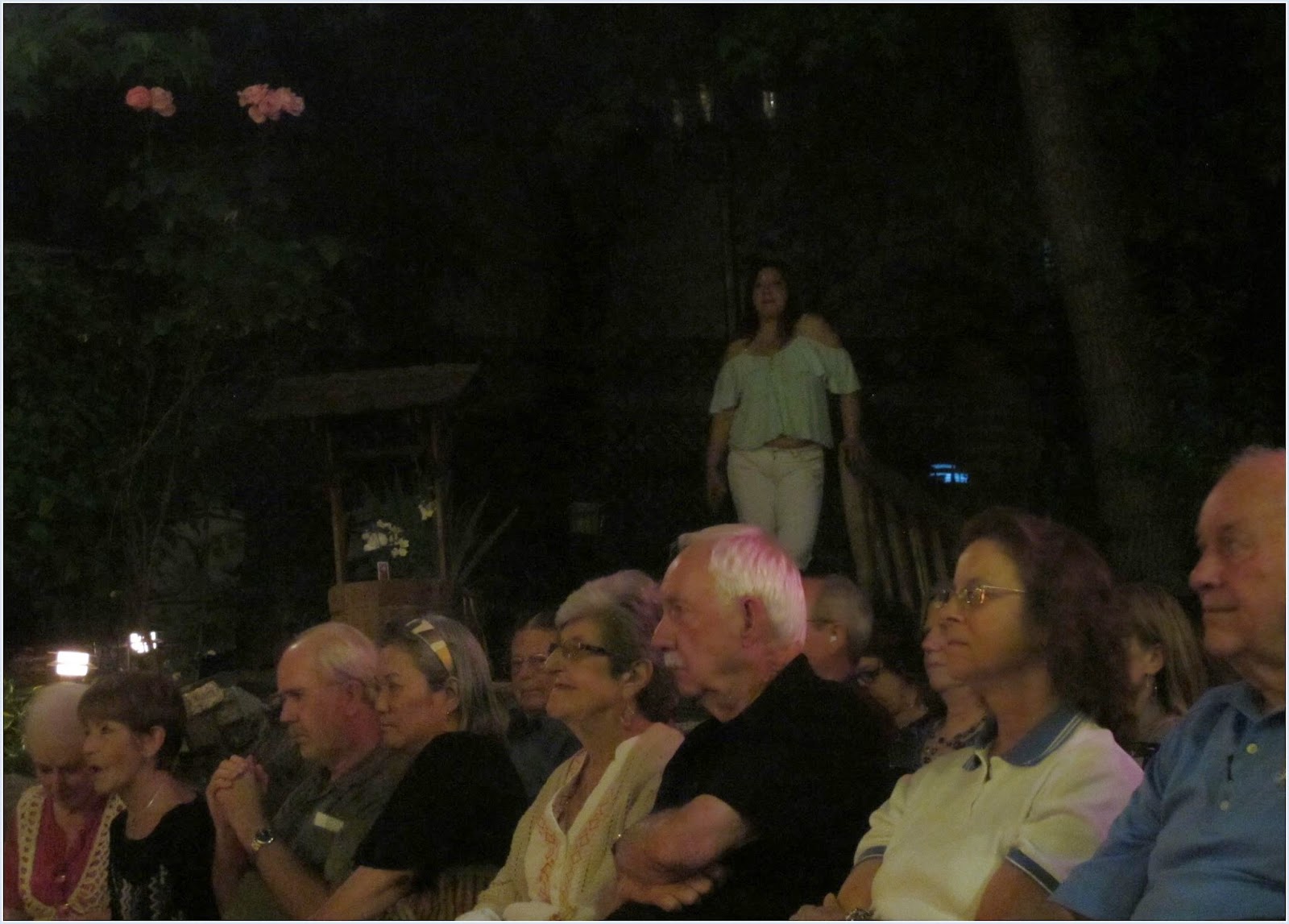 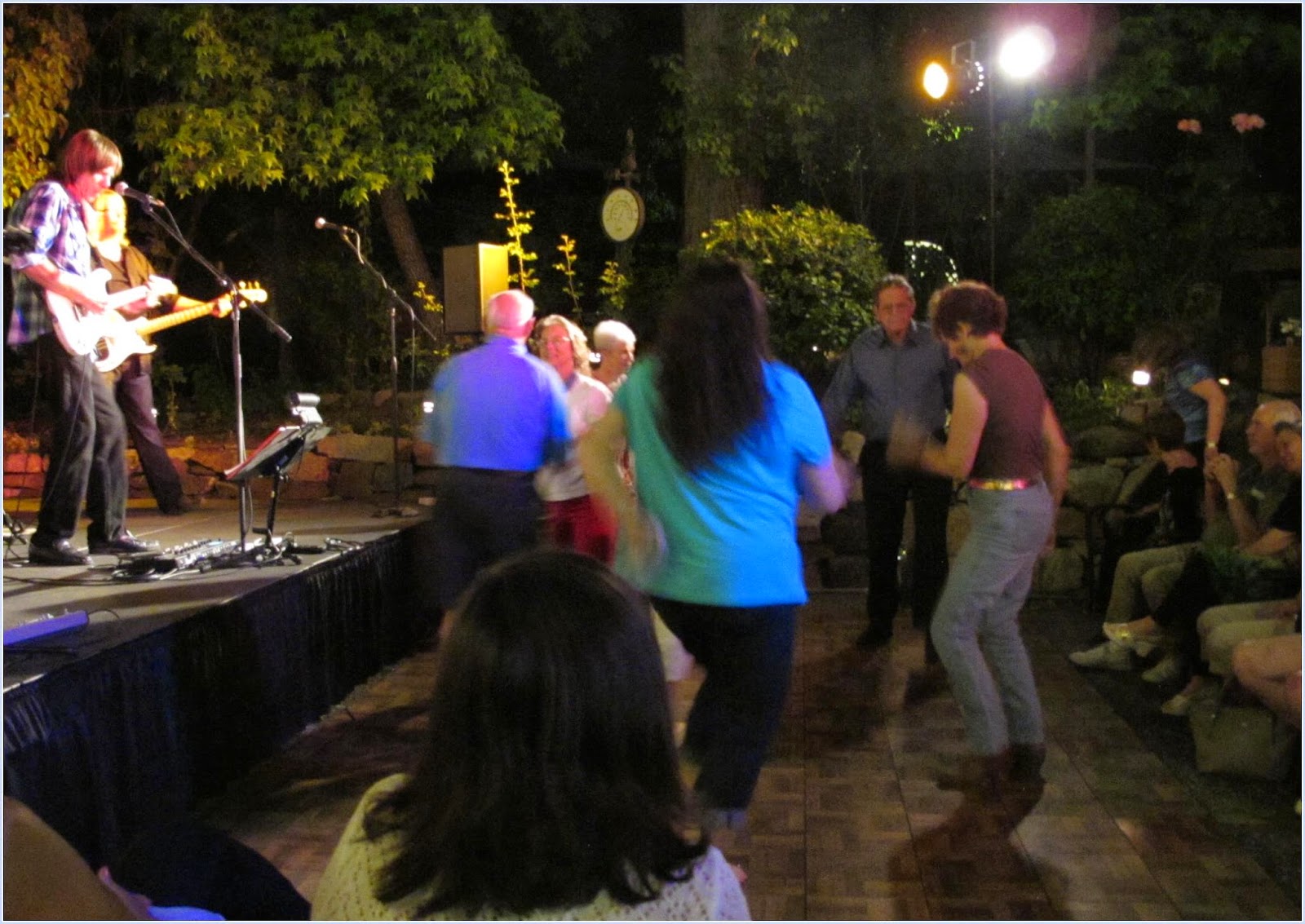 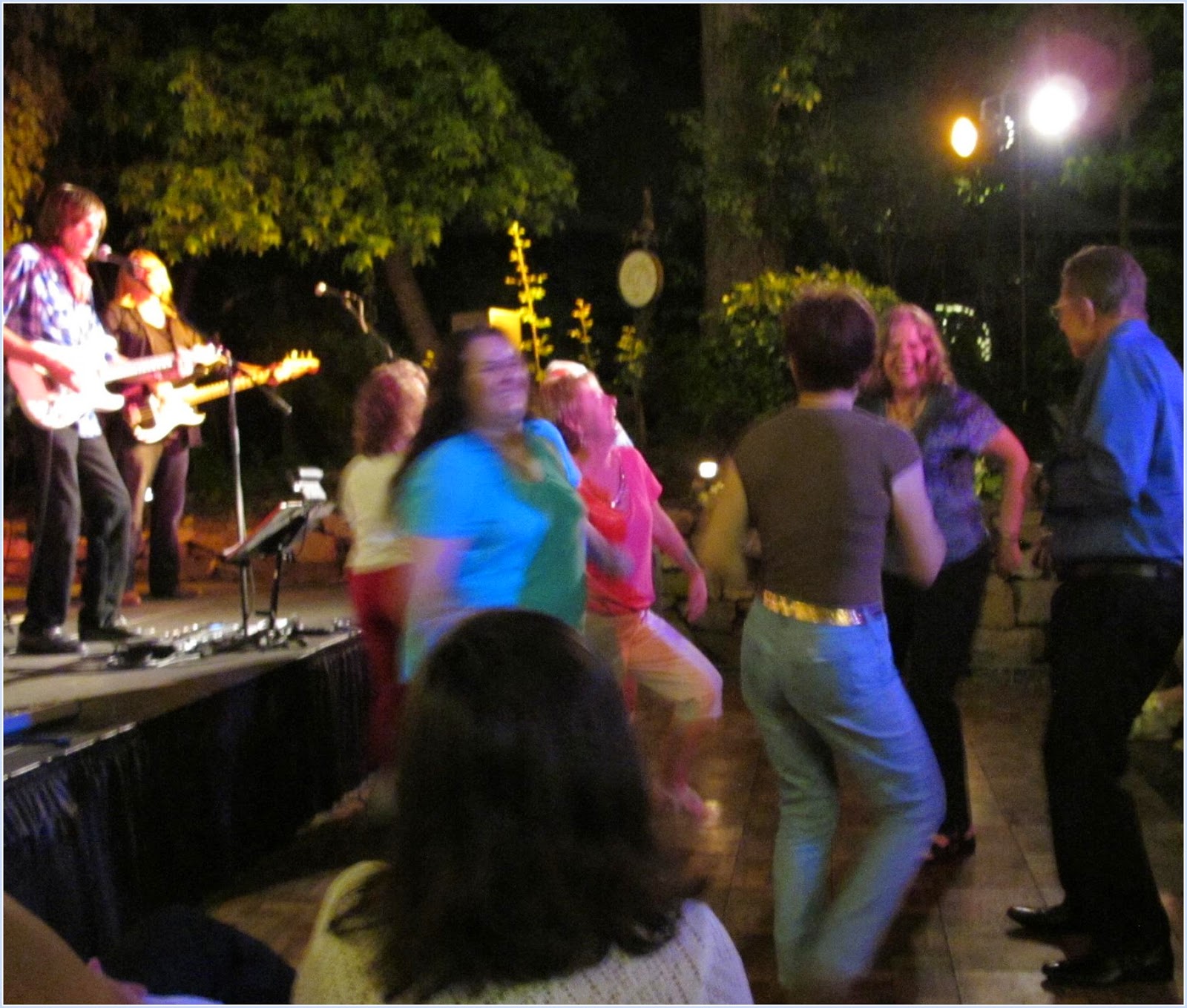 One of the men sweeps our hostess, the proprietor of the hotel, onto the dance floor. She lost her husband this past year, yet carries on with the summer concert series and other events throughout the year. She and other hoteliers took an enormous hit from the massive Rim Fire that came so near to us and interrupted the flow of Yosemite-bound tourists. The federal shutdown that completely closed Yosemite was the coup-de-grace for our local tourist economy which our little town depends on. 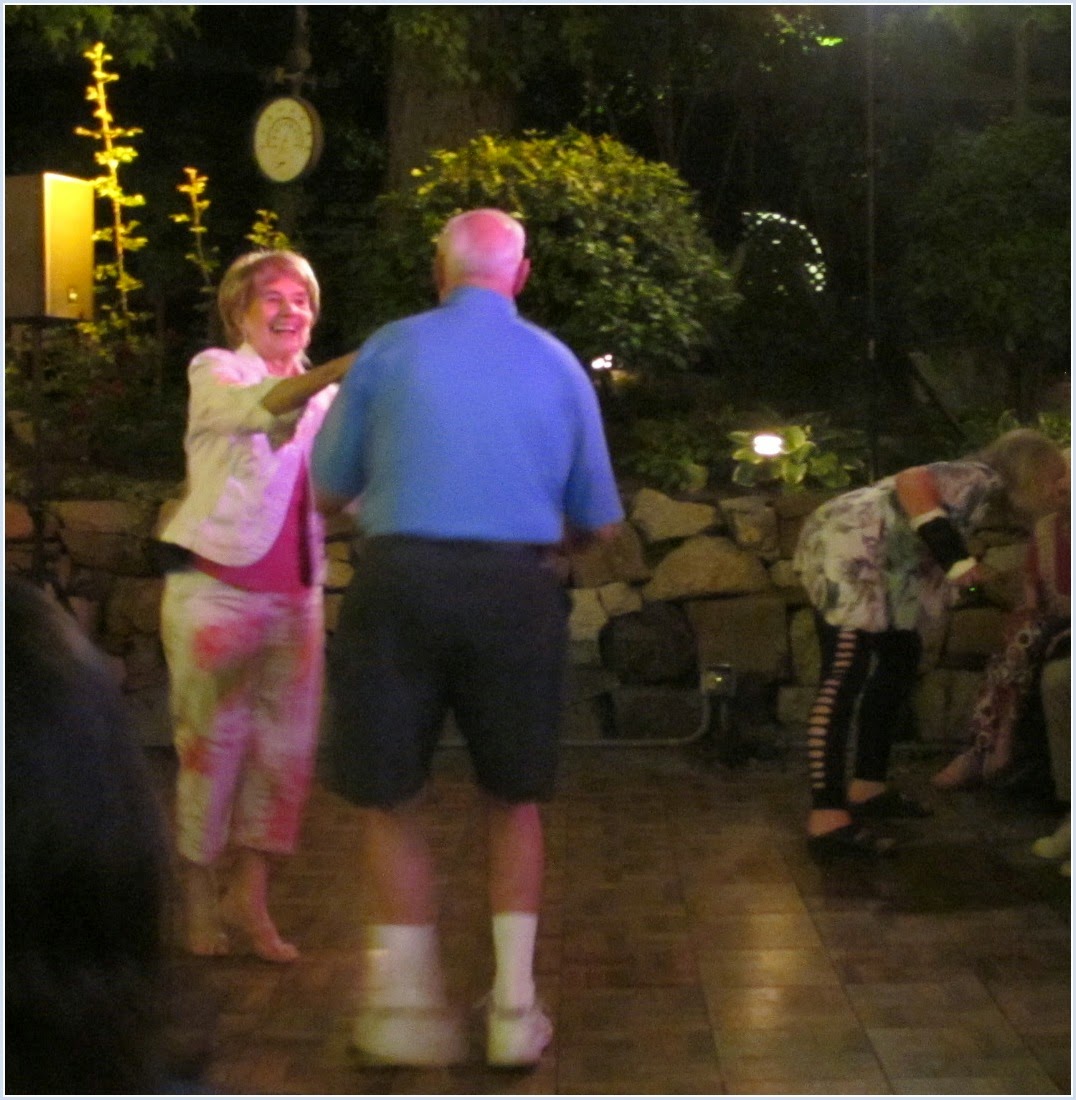 Sister keeps giving me the eye. She says she'll hold me up if I want to go out on the dance floor. I know she wants to dance. The women are the most enthusiastic dancers and finally someone beckons her onto the dance floor (sister in blue denim jacket). 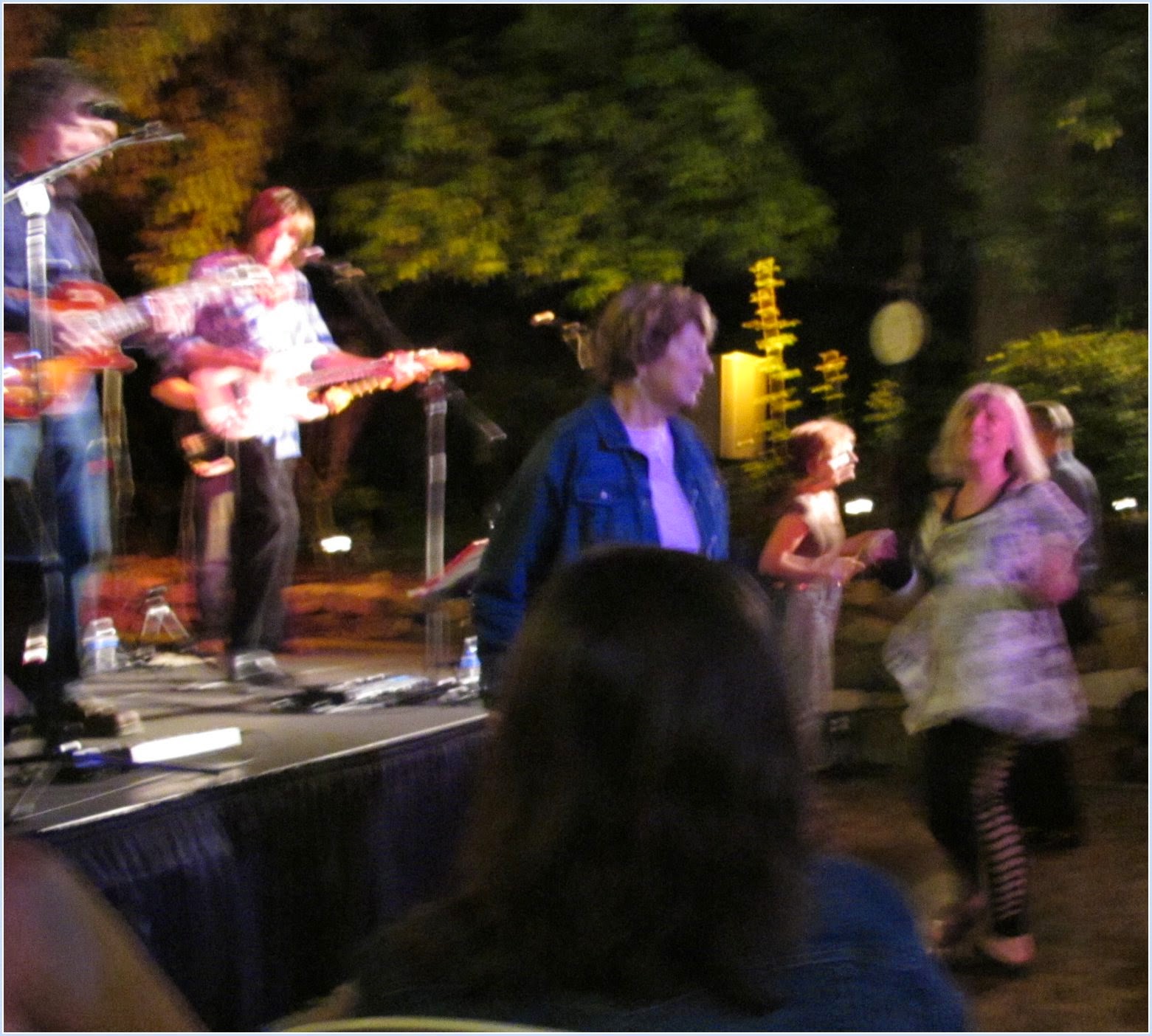 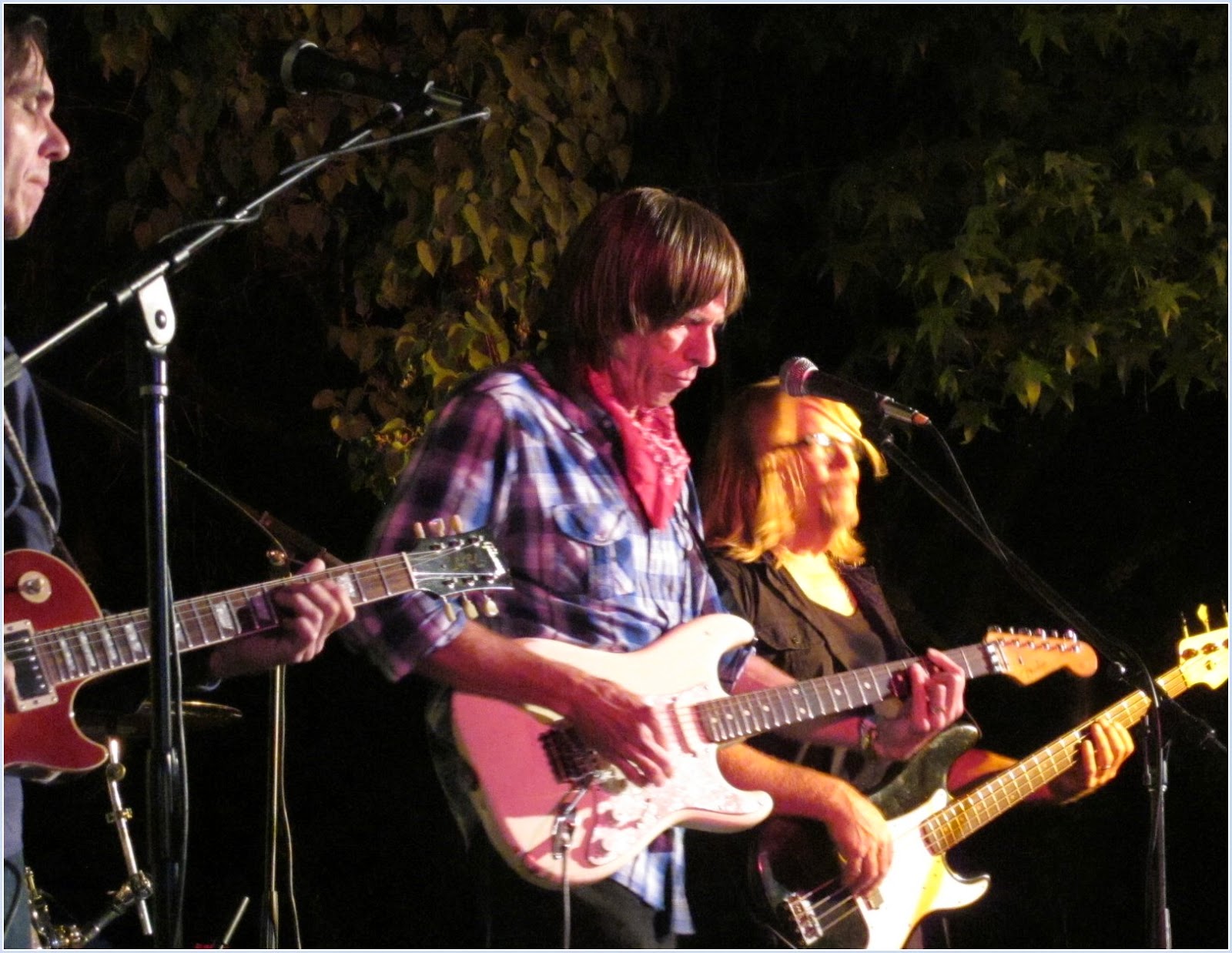 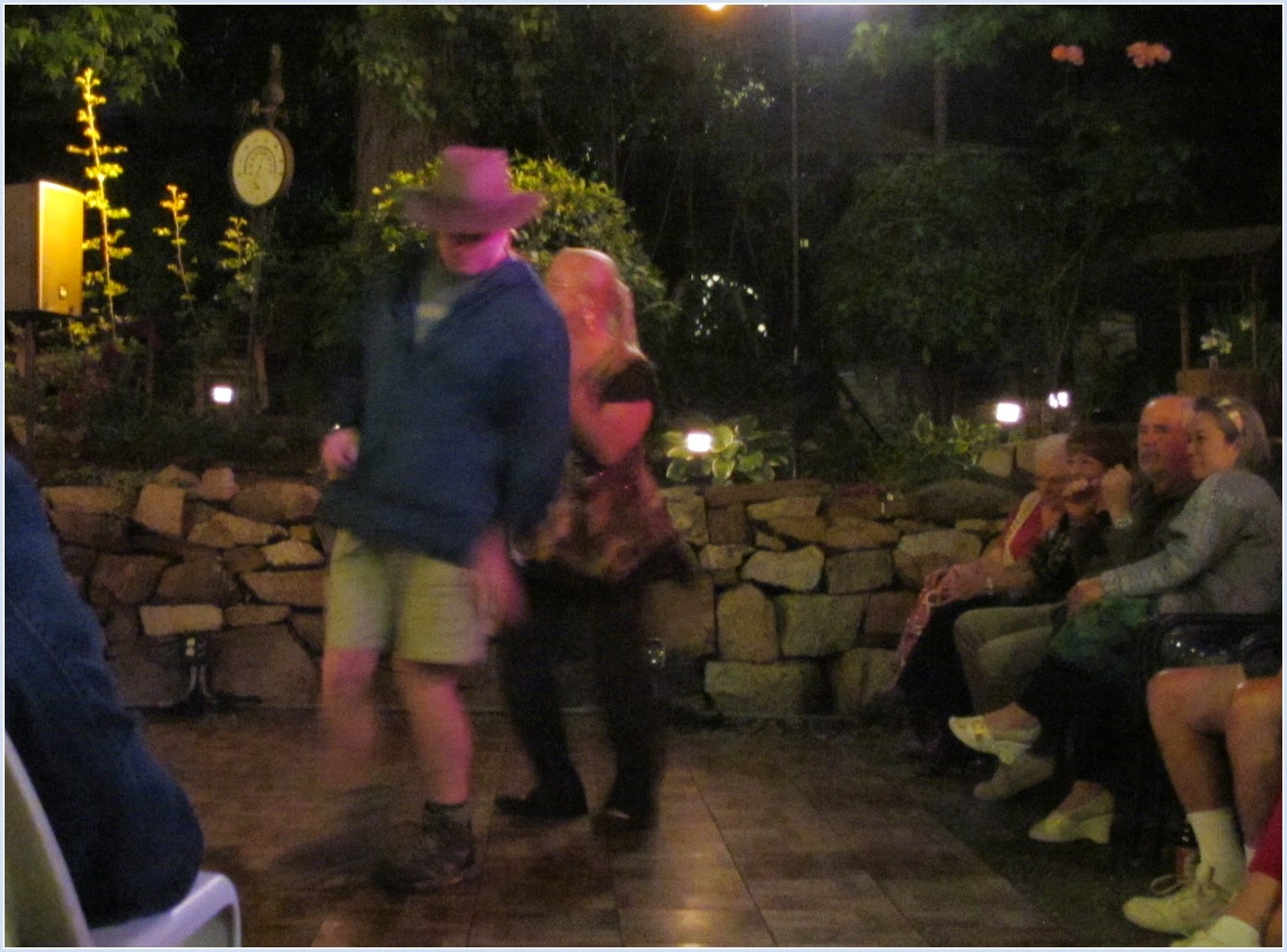 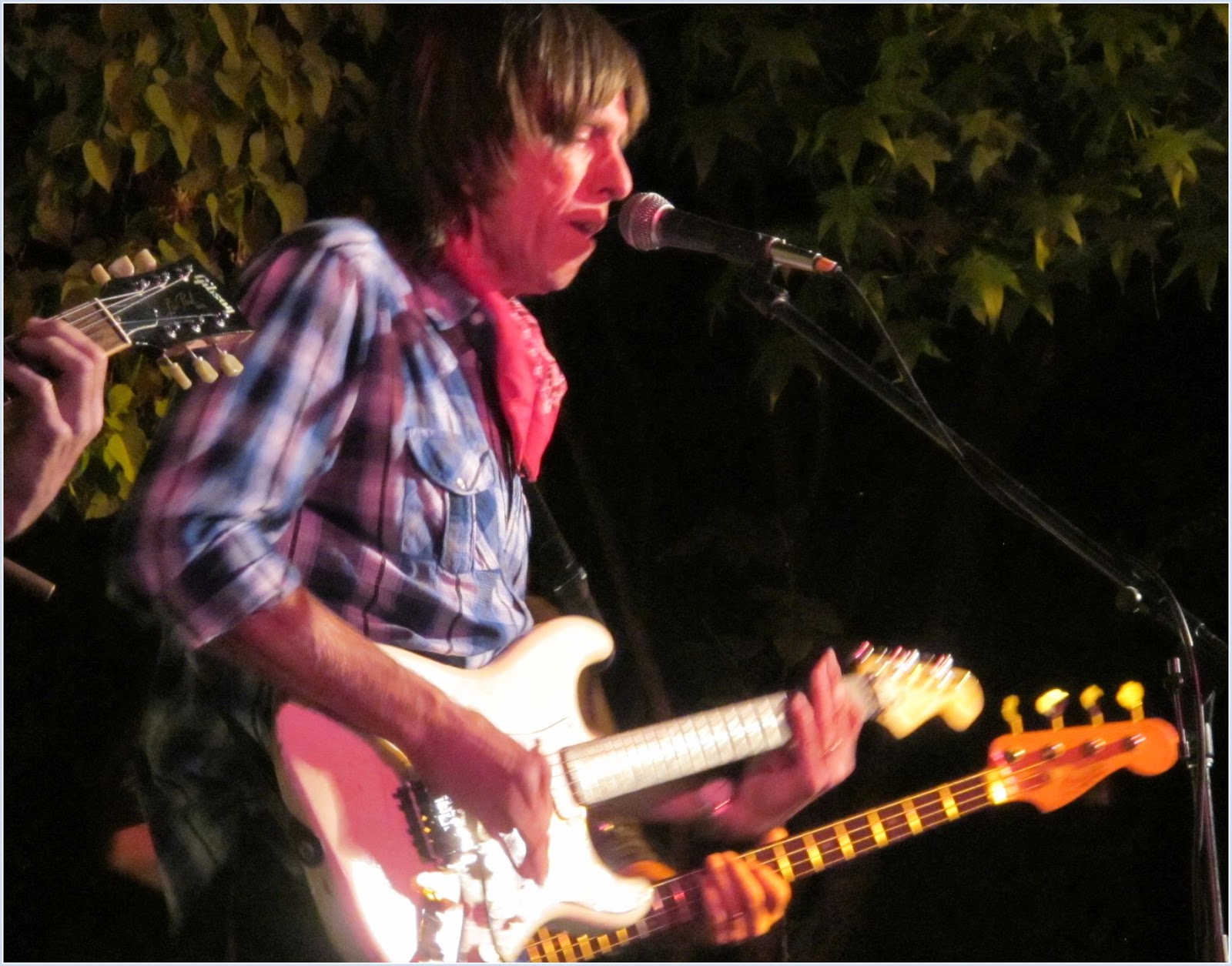 At some time along here, as I knew it would, the band strikes up "Proud Mary." I loved dancing with my husband (our first date included dancing), and I always called "Proud Mary" our favorite tune to dance to. To hell with dizzy, wobbly, recuperating. I tell Sister, I'm on. I take my glasses off so that flashing lights through trifocals won't further confuse me visually. She watches me closely, ready to grab if I tilt, but I stand up straight -- instead of the fatal looking-at-the-ground which tips me over -- and rock to the core, eyes misting at times in remembrance. It goes on and on and it's ecstasy. 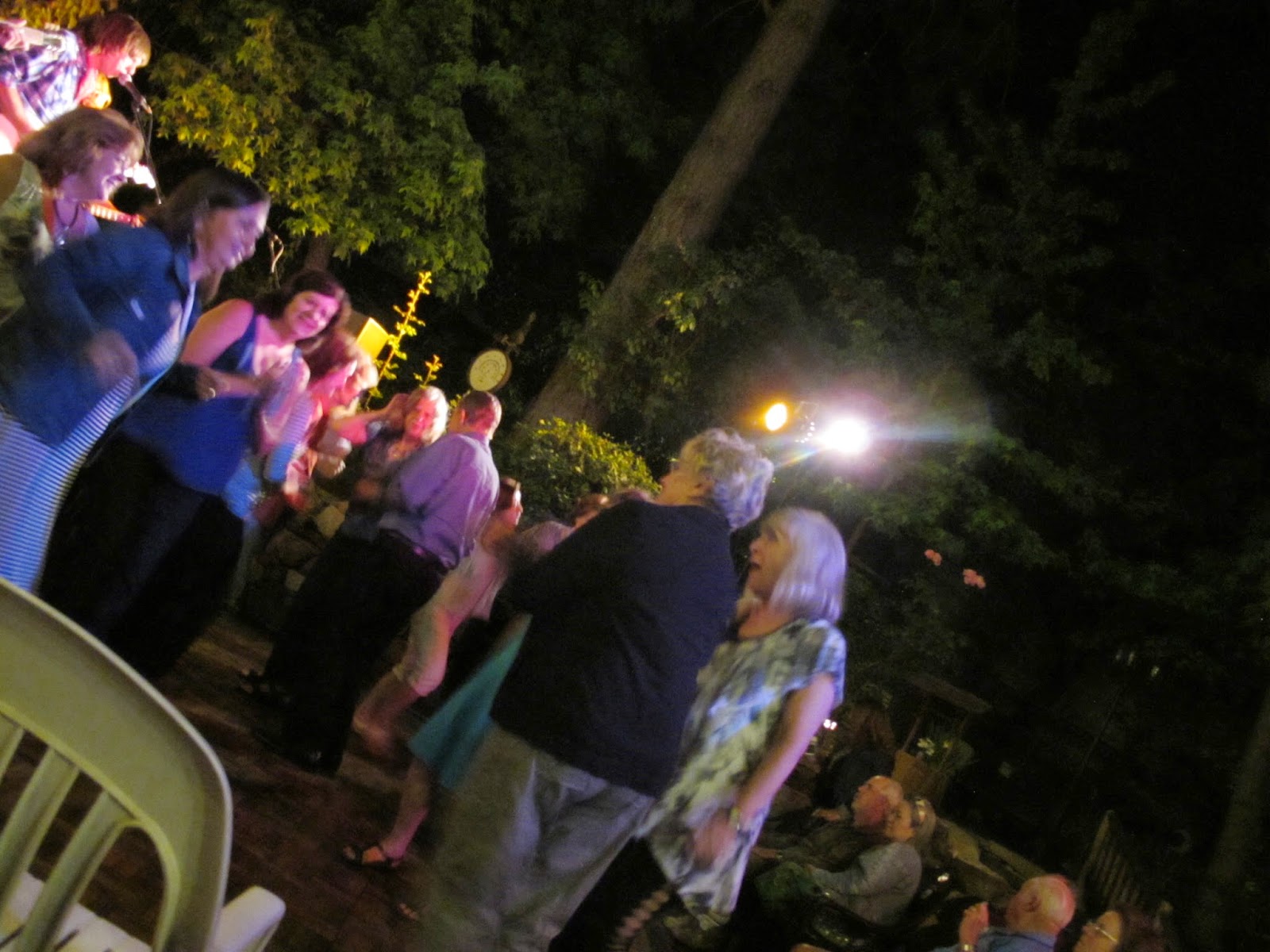 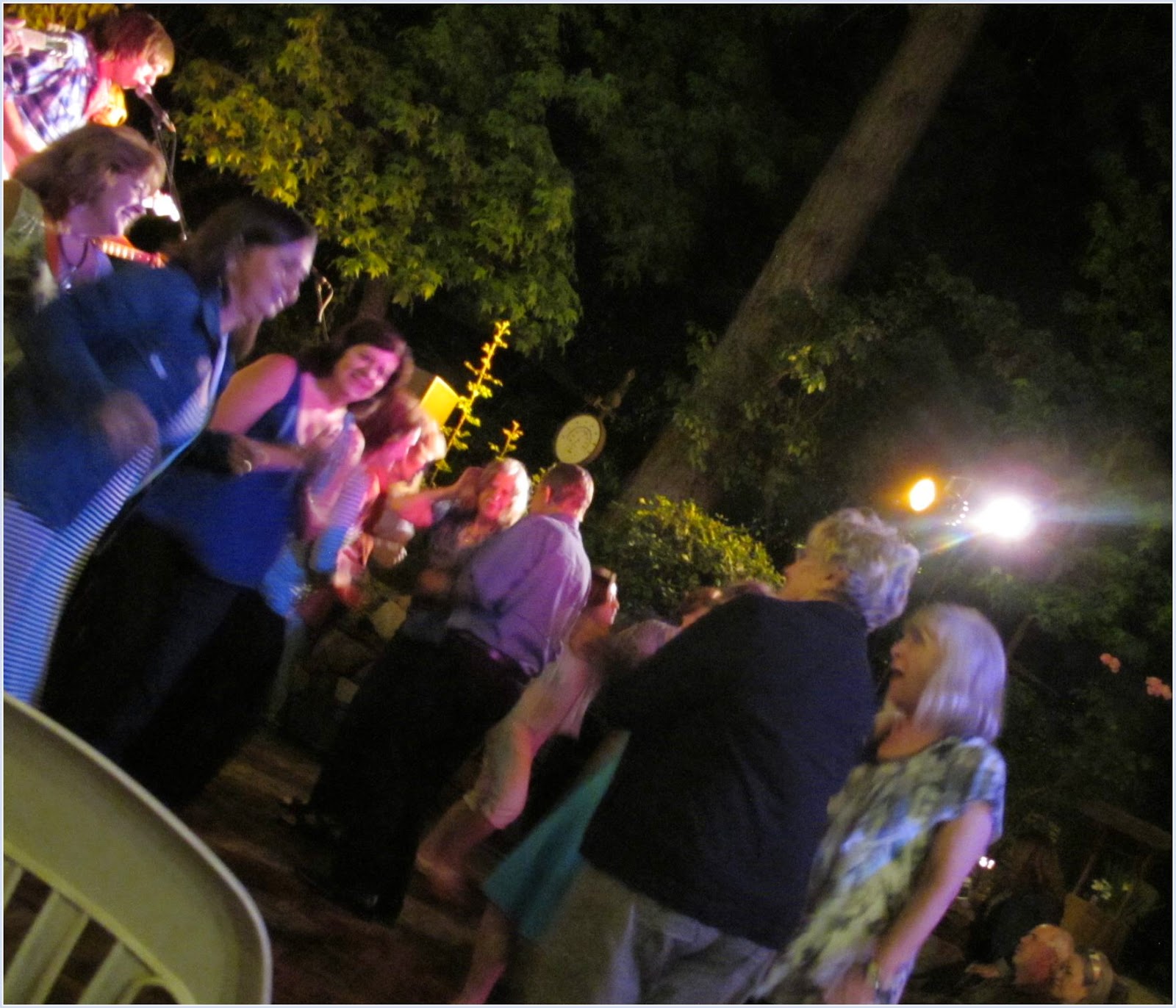 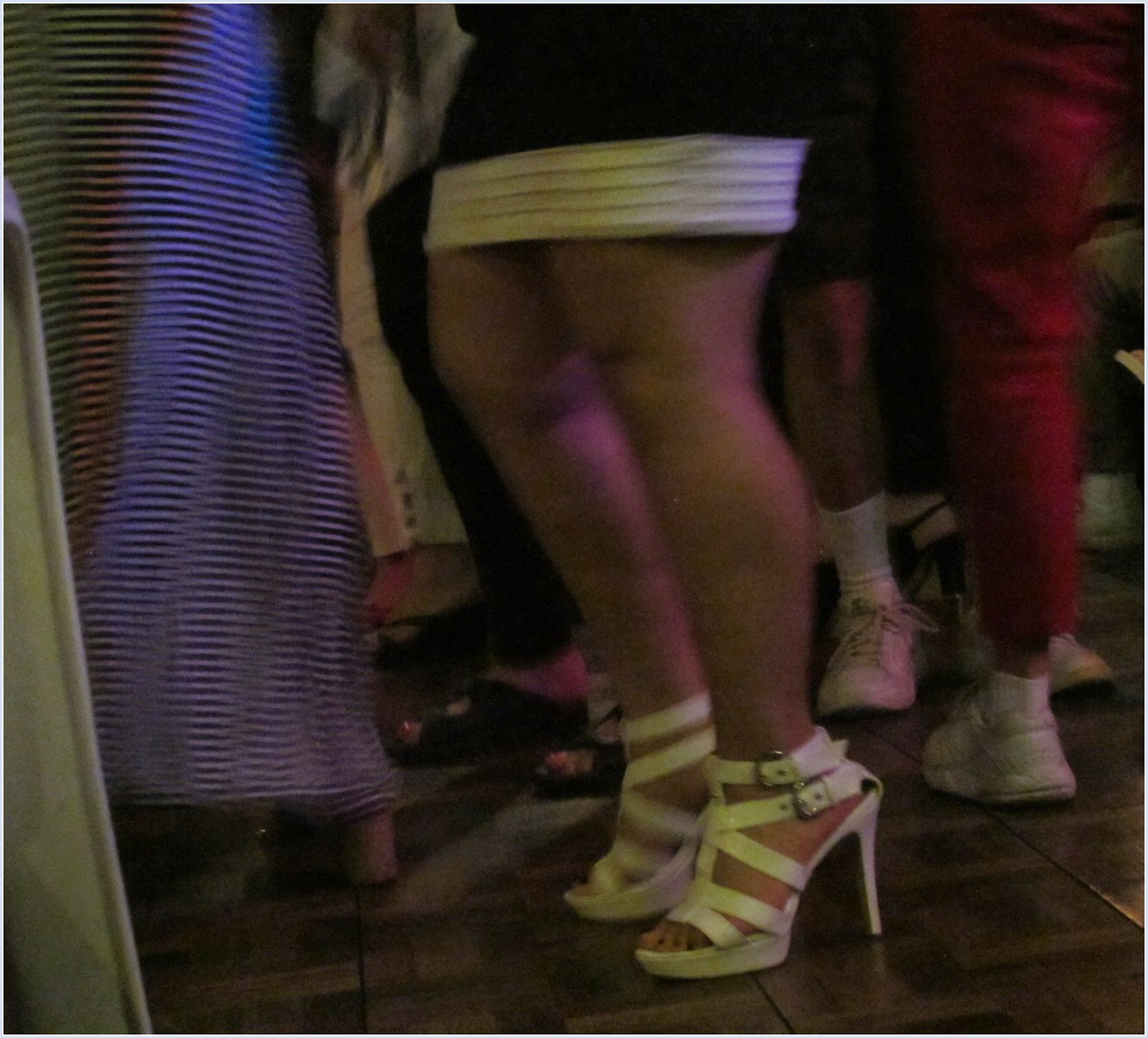 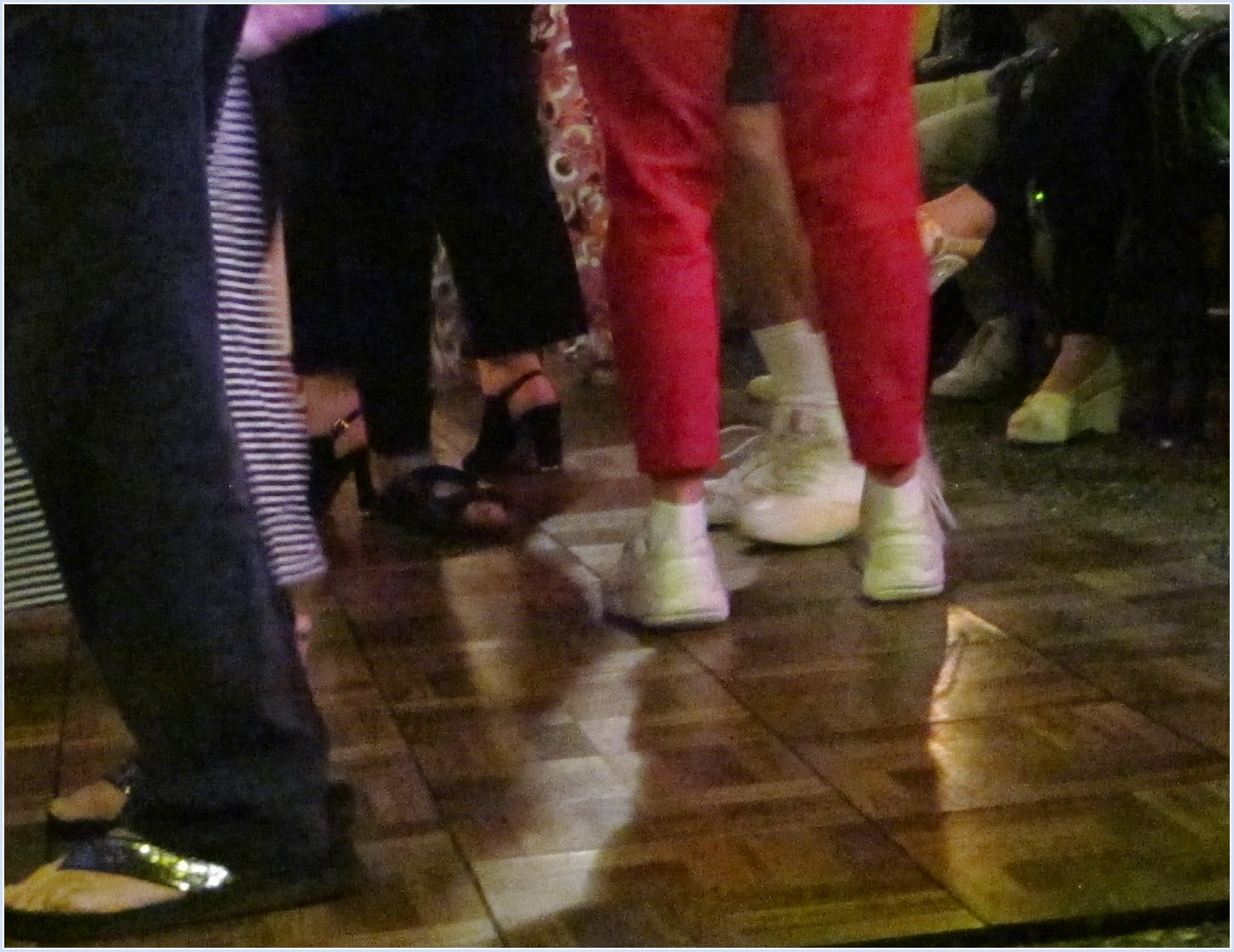 And crowds of dancers that feel the end is drawing near. 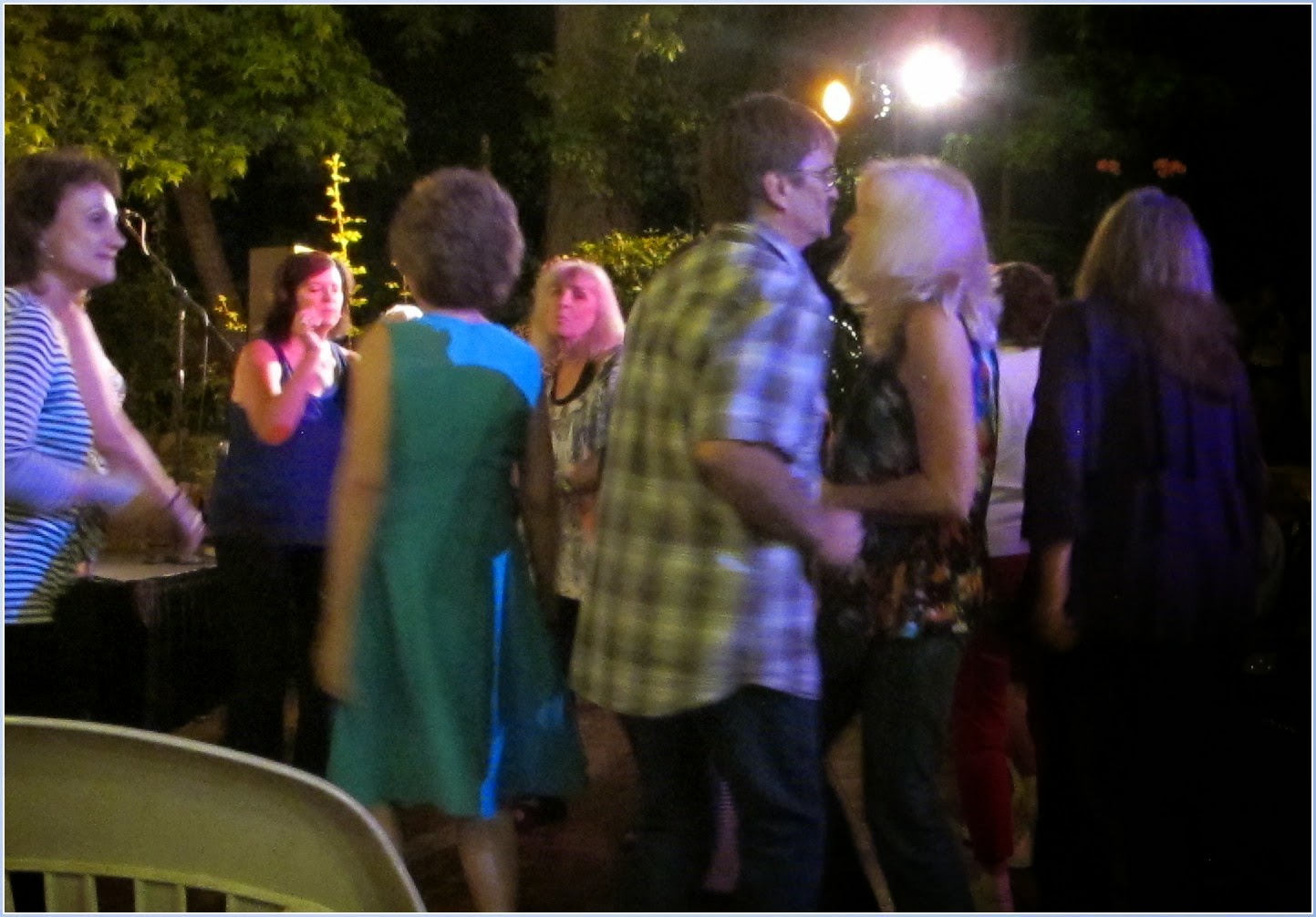 There's enough of a chill in the air now that I'm glad I brought a wrap. 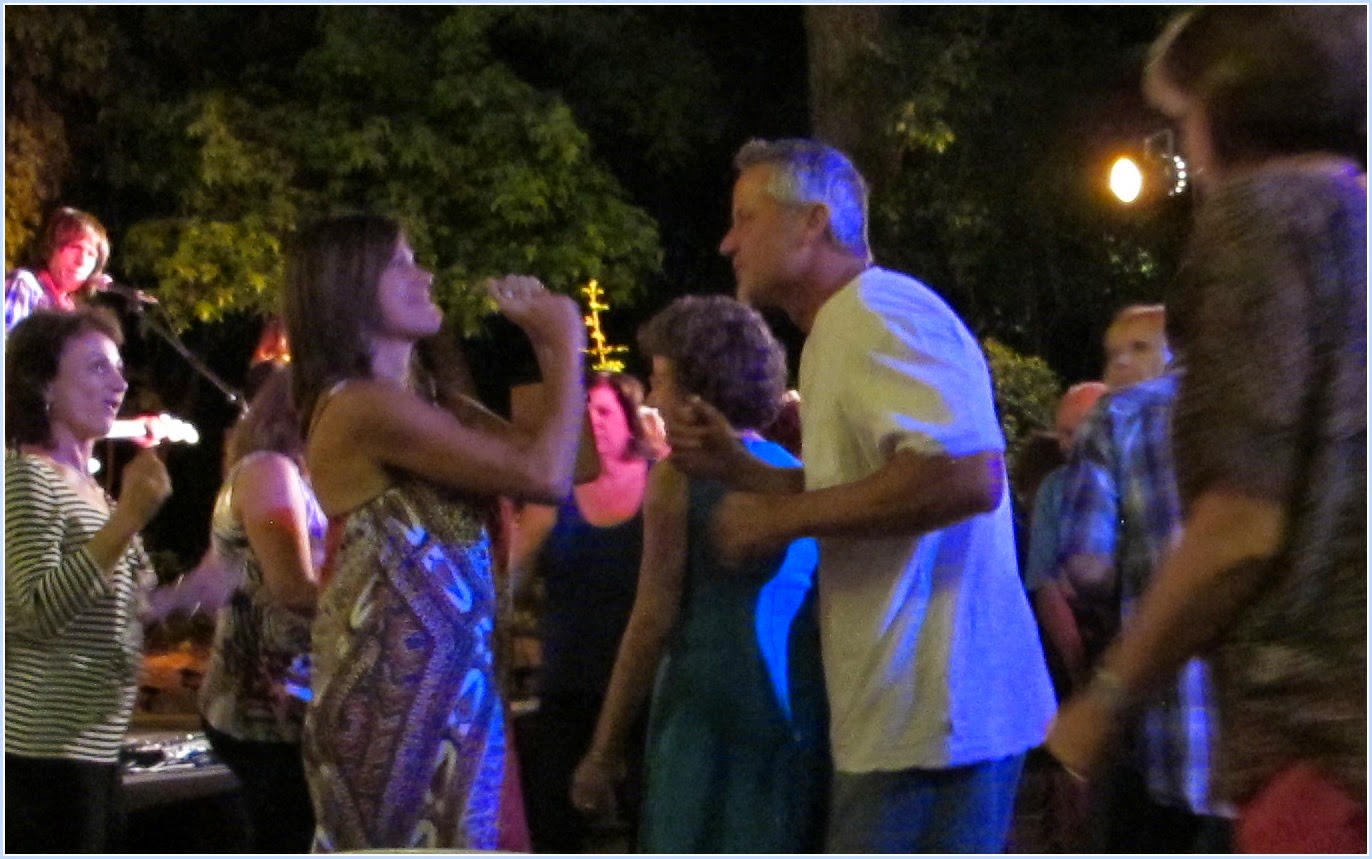 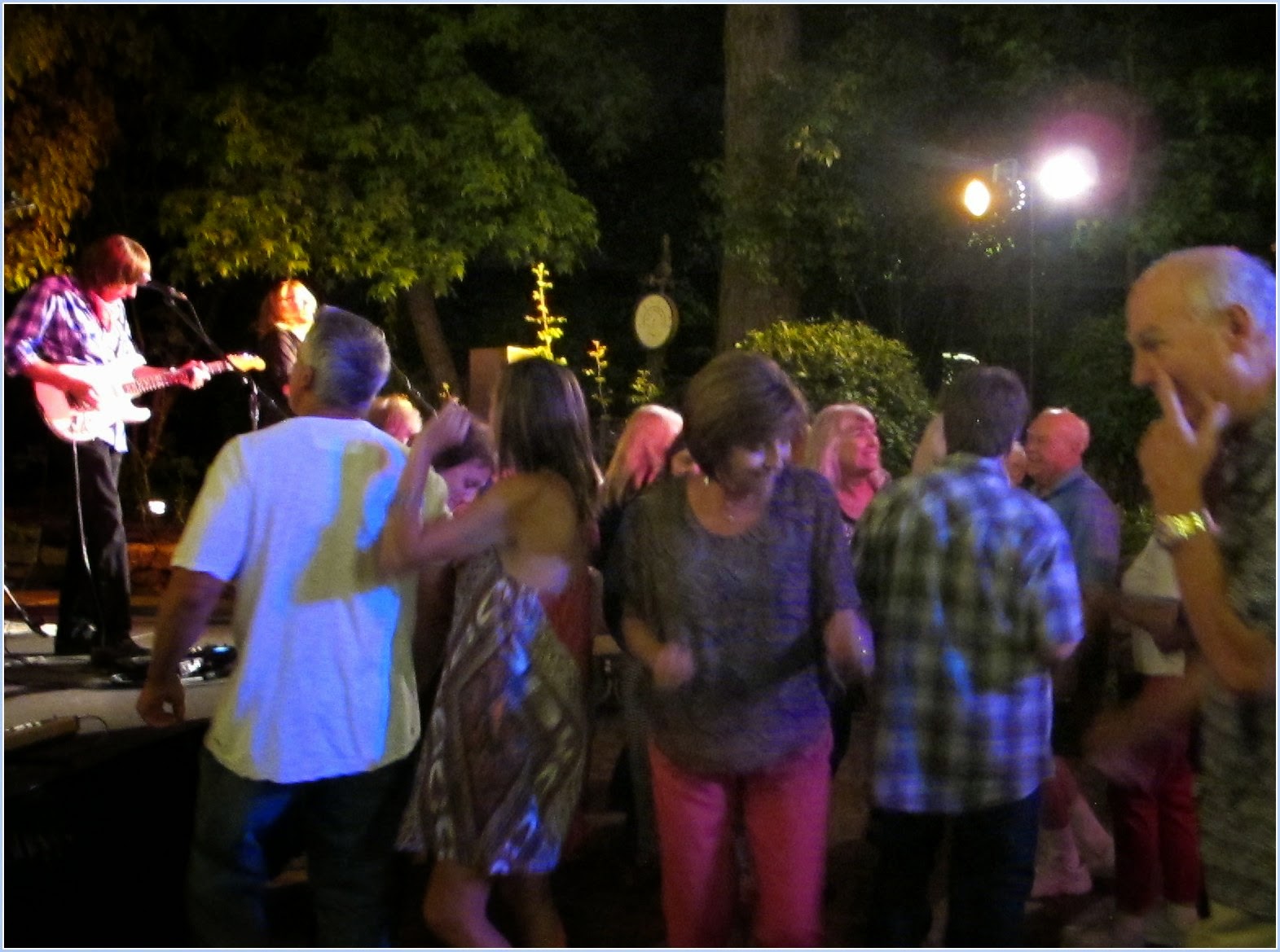 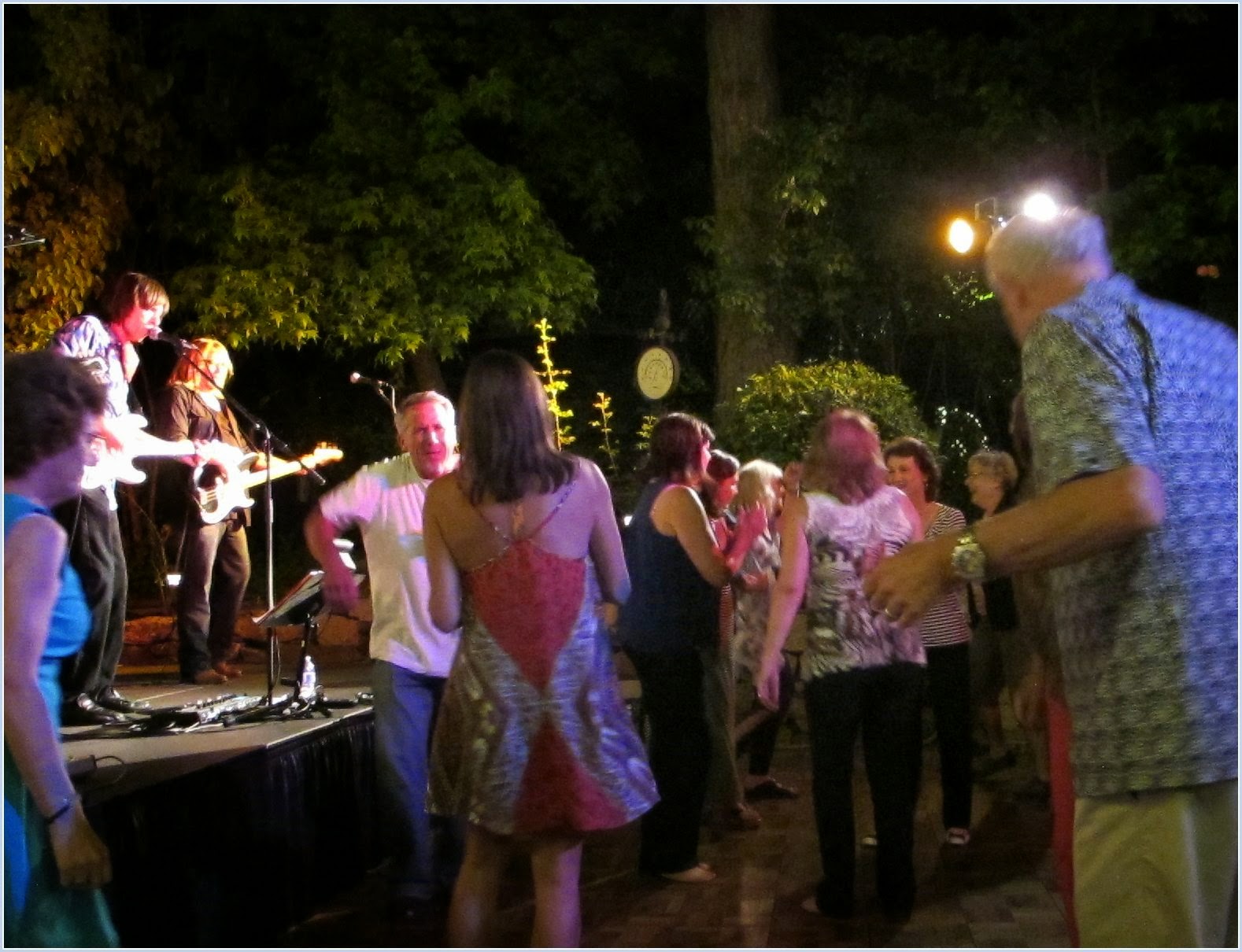 I'm sitting on something uncomfortable. I pull it out. It's my glasses that I tossed down to dance. They're kinda flat. When I bought them, not that long ago, our local optician demonstrated how they could be tied in a knot and spring back. They're not precisely springing back. But I do enough pushing and pulling to be able to see. I'll take them in later for tweaking.

Sister's Friend and I walk down the alley behind the main street businesses, hearing a band playing in the bar next door. I wonder if The Travelin' Band drowned them out. We're off to the post office to check my mail while Sister and BIL fetch the car. They arrive at the post office just as I've finished collecting my mail and that from the several boxes I'm responsible for.

I smile, thinking back on it, and I feel happy.