Puddles of Sunshine and Scatters of Rain

As the folks back east (back east to this Californian is anything beyond Colorado) can't wait for severe weather to just shut up, we keep our eyes skyward, hoping that puffy cloud drifting by would deign to drop us a few sprinkles. Or even rain.

The weather has toyed with us for a couple of weeks. Tiny blossoms crowd together to make beautiful flowers on the deerbrush that sparkle in the sunshine. 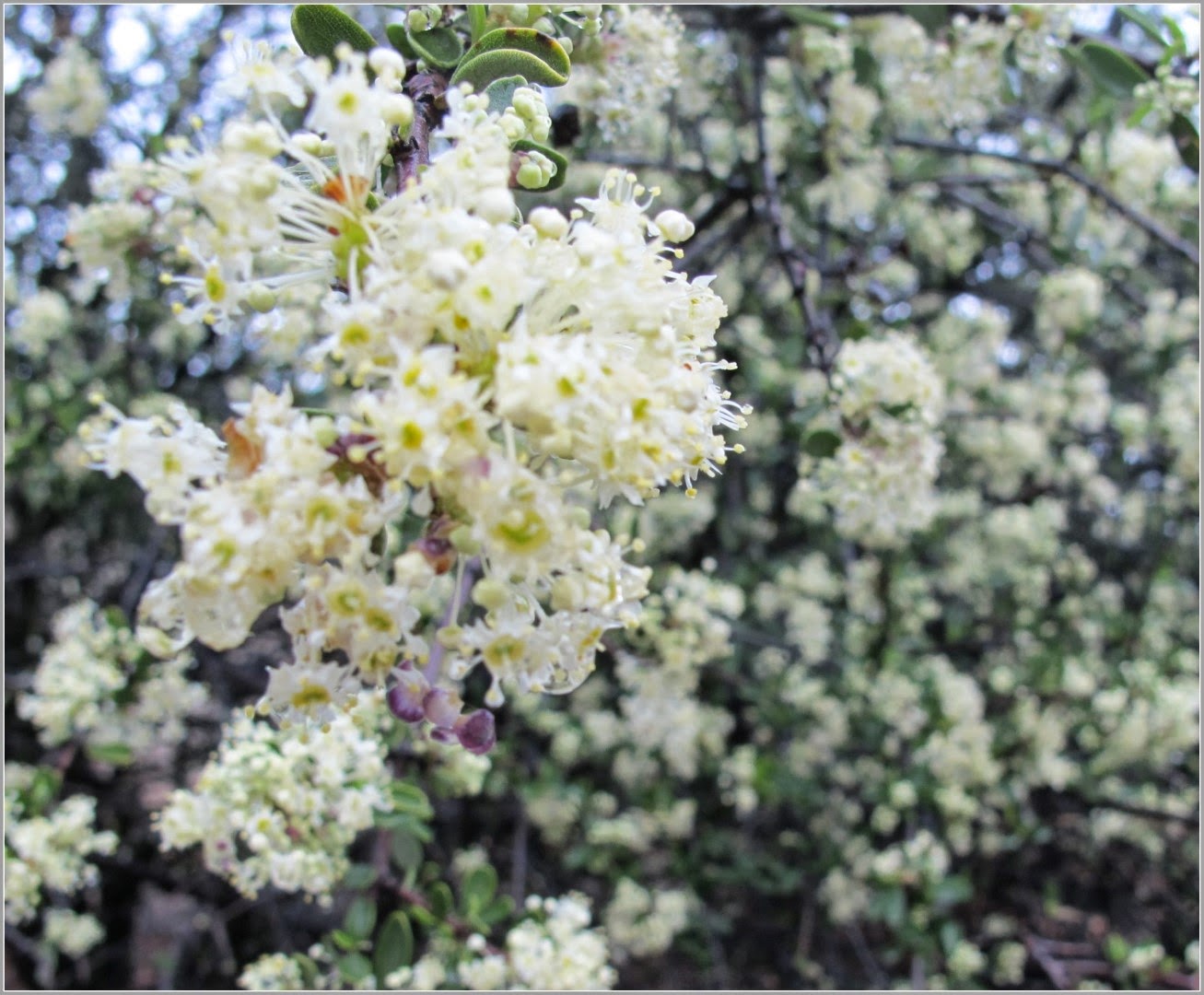 Underneath the changing skies, the rest of life goes along pretty much as normal: a Soroptimist newsletter that took me much too long to complete, partly owing to meetings, NeedleCrafts, doctors' appointments and a skosh of photography. Oh, and let us not forget participating in the Family Wellness Faire which is put on by Soroptimist. Waiting patiently in the wings, my taxes.

Last week tulips poked out their heads at the Little House where we hold NeedleCrafts. I ran out with my camera for a close shot, capturing pictures of raindrops on tulips and on my lens. 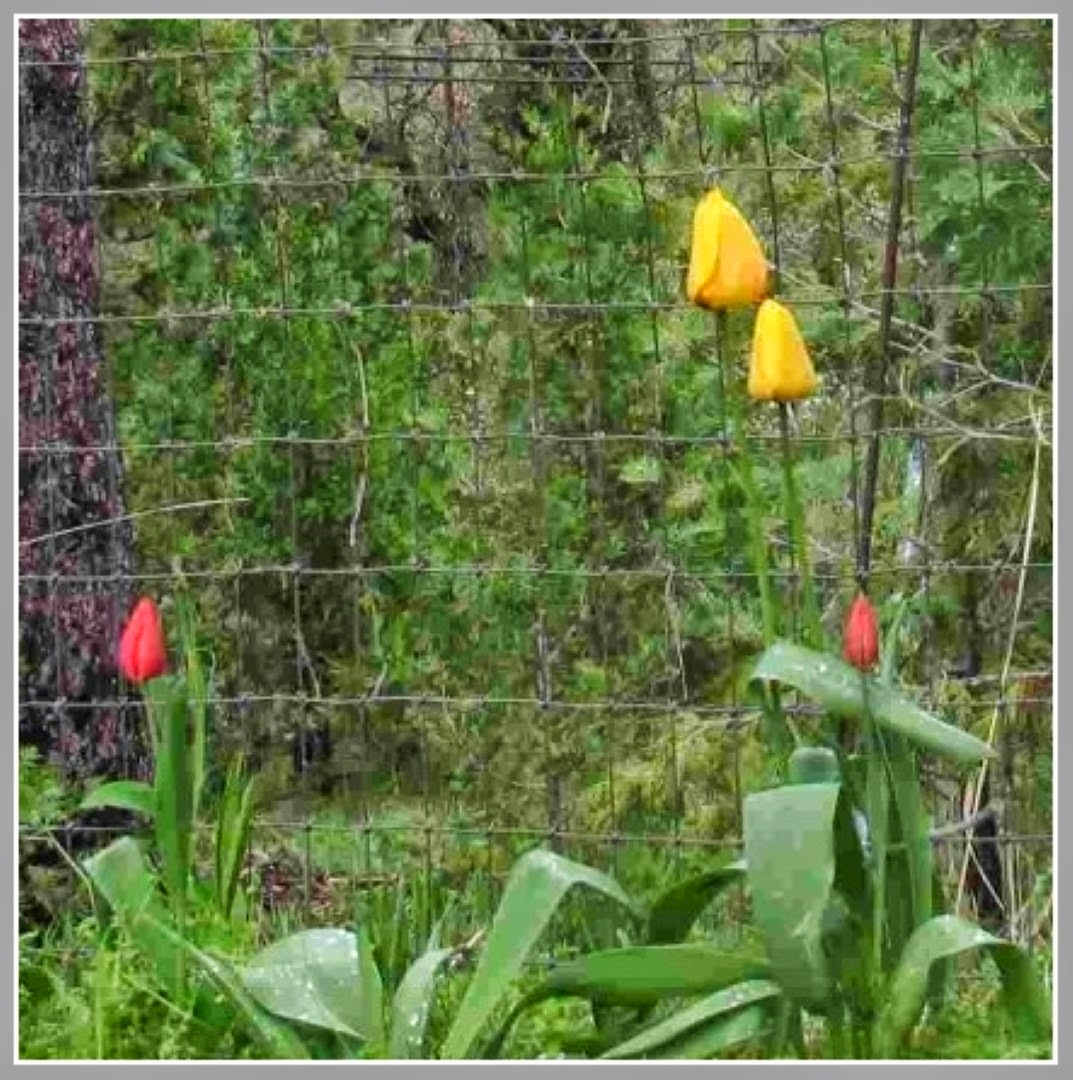 I come home to Chloe in a patch of sunlight, resting her chin on the toy banana. 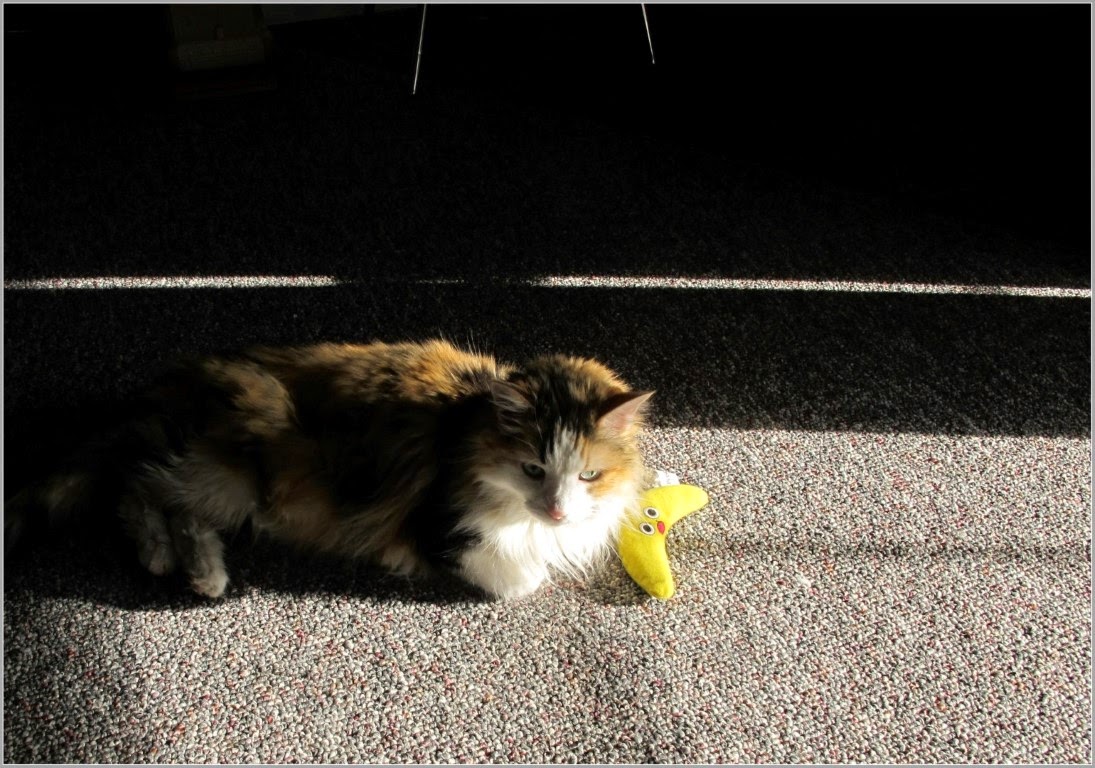 I see the sunshine outside, but rain is falling on us. I have never successfully photographed rain falling, but I take a stab at it. I don't see it here, despite a clattering rainfall. 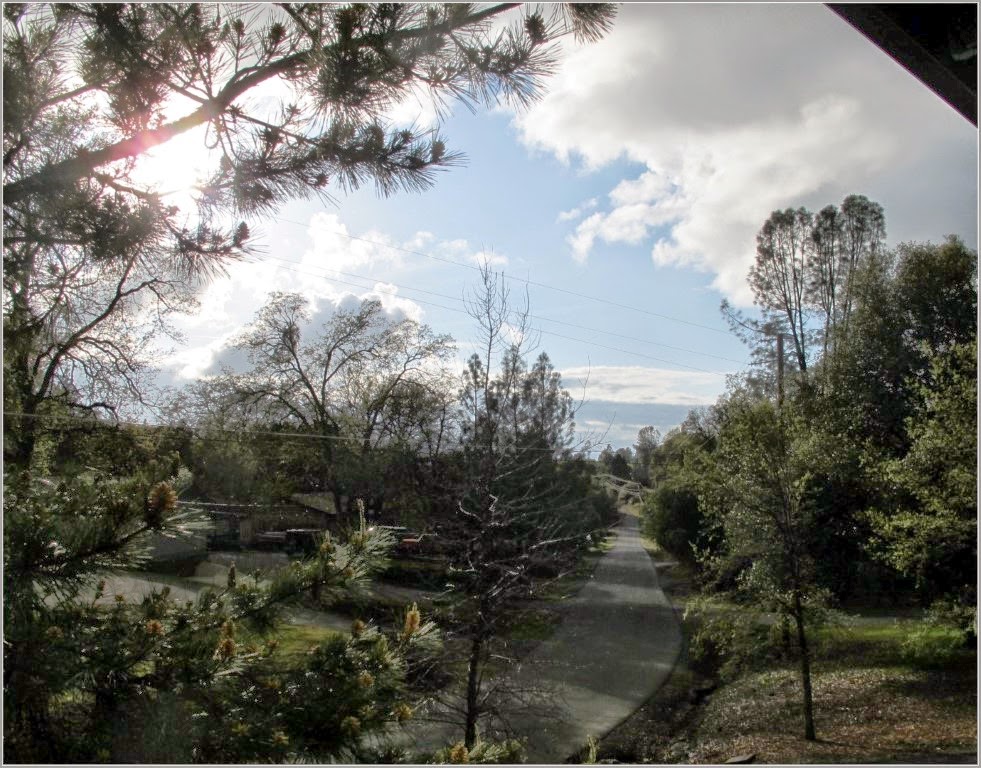 I look at the image below, excited that it's showing rain. Bear with me, I'm going to go wild with success. Rain and sunlight. 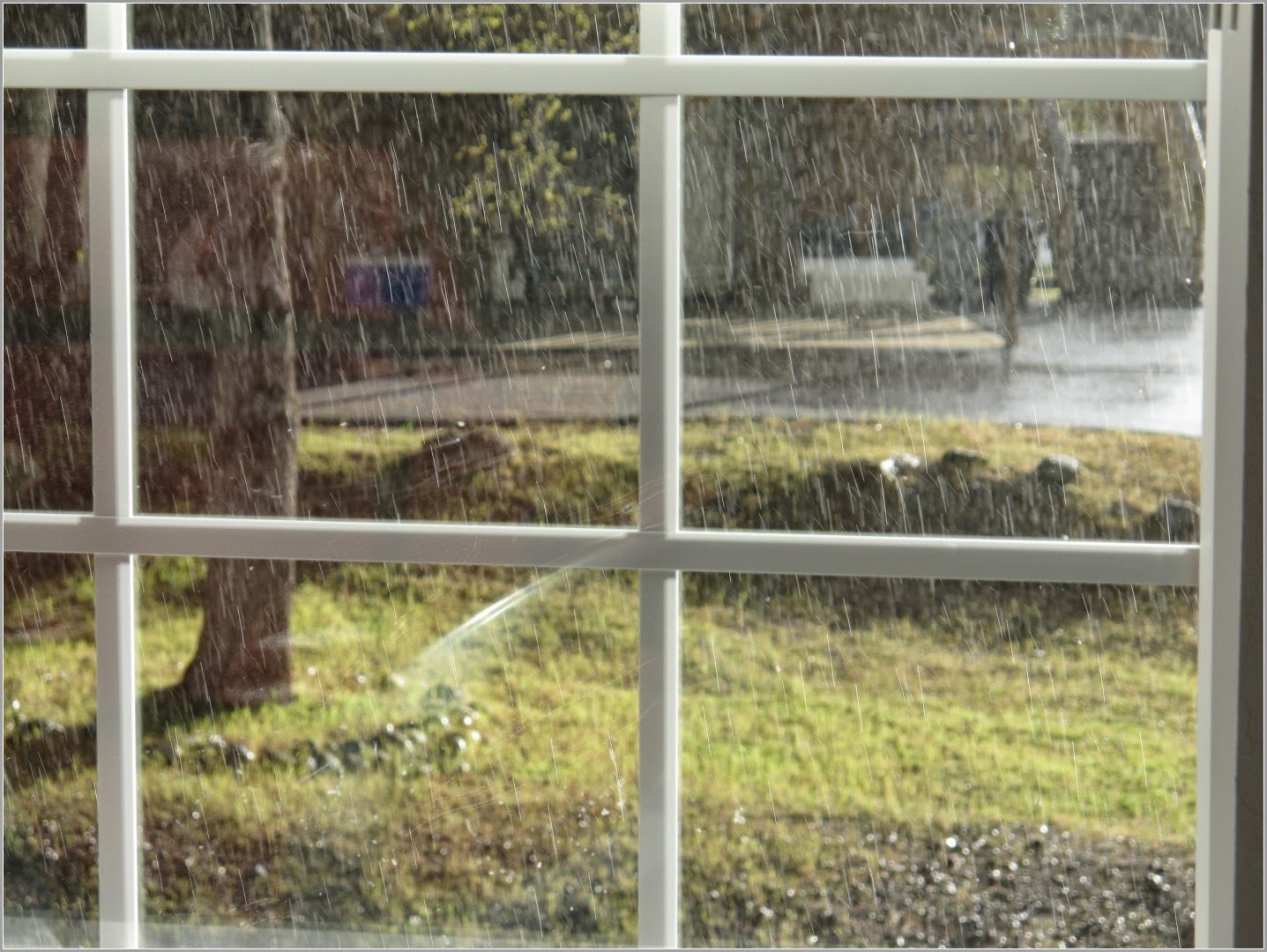 Sun and rain. There must be a rainbow somewhere. I race outside. The paper delivery guy has not put a raincoat on my paper. Wet splotches on the paper, shadows and reflections. 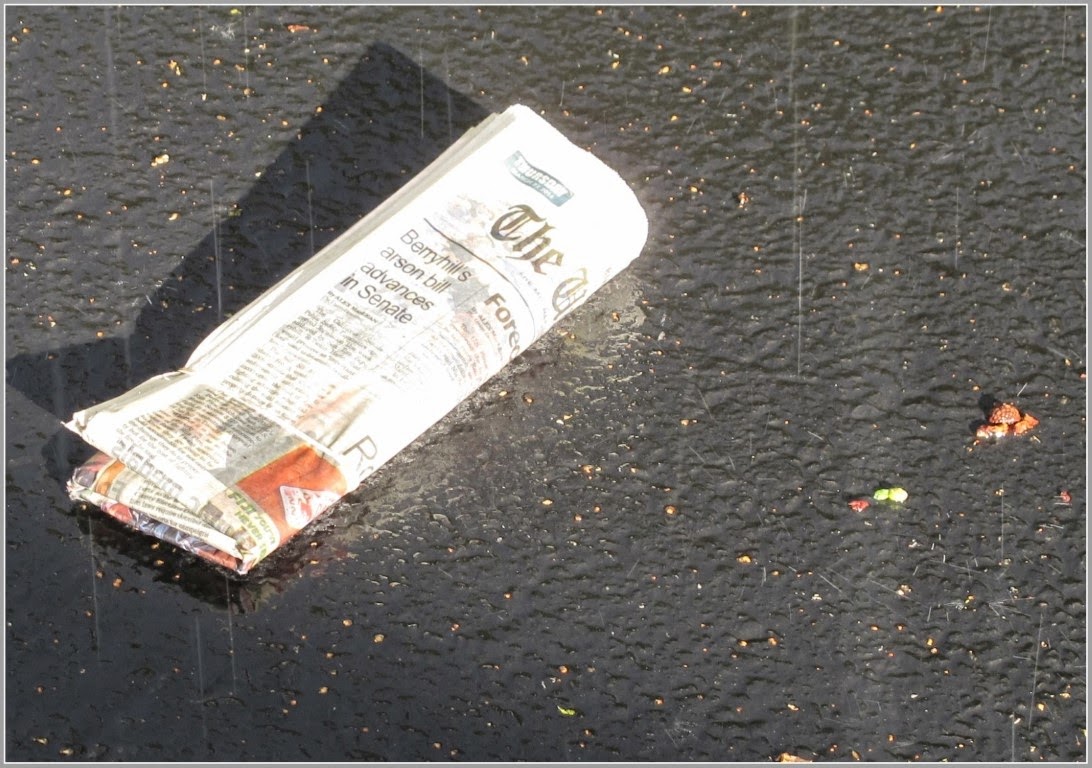 Rainbow. Exactly where I anticipated it would be. 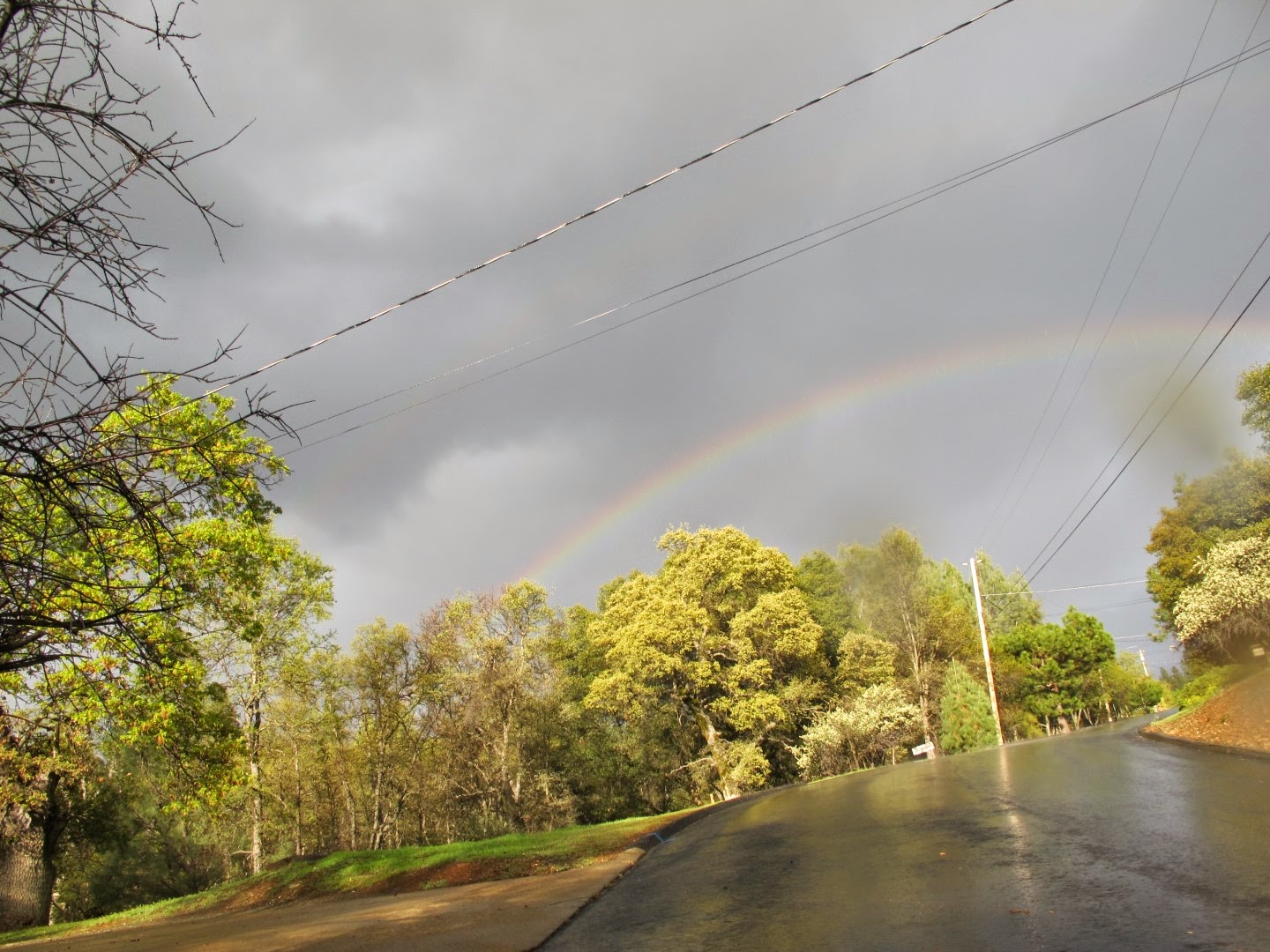 Water glistening on river rocks that border the driveway... 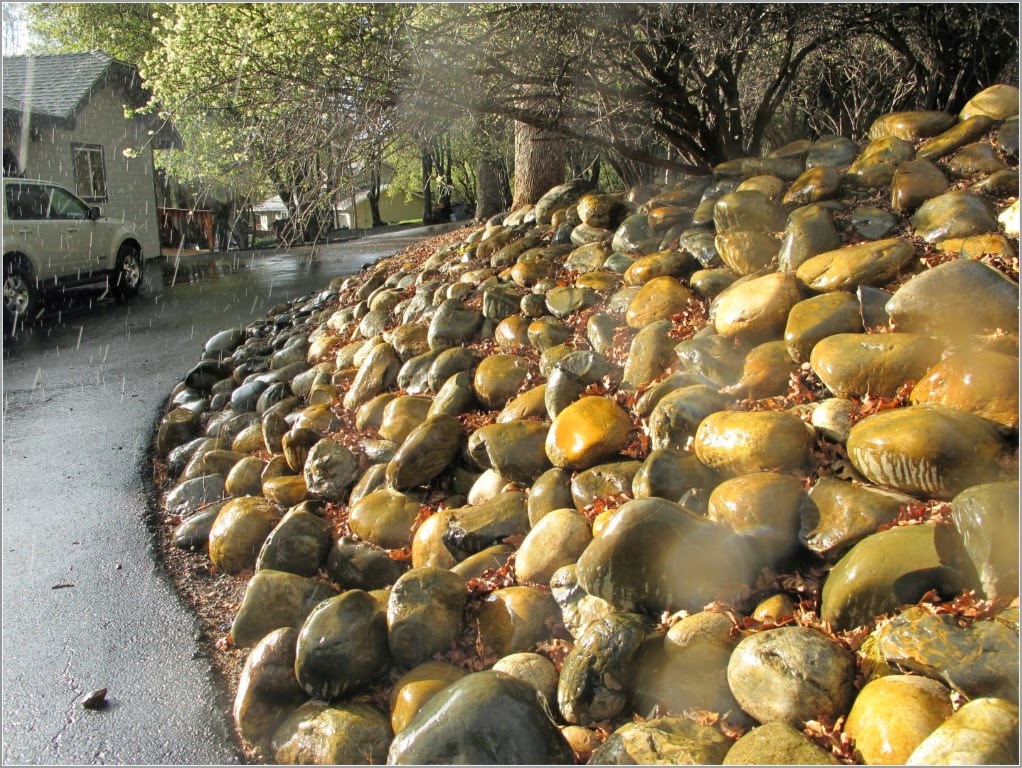 My damp paper, my sprinkled camera, and I sprint back into the house. 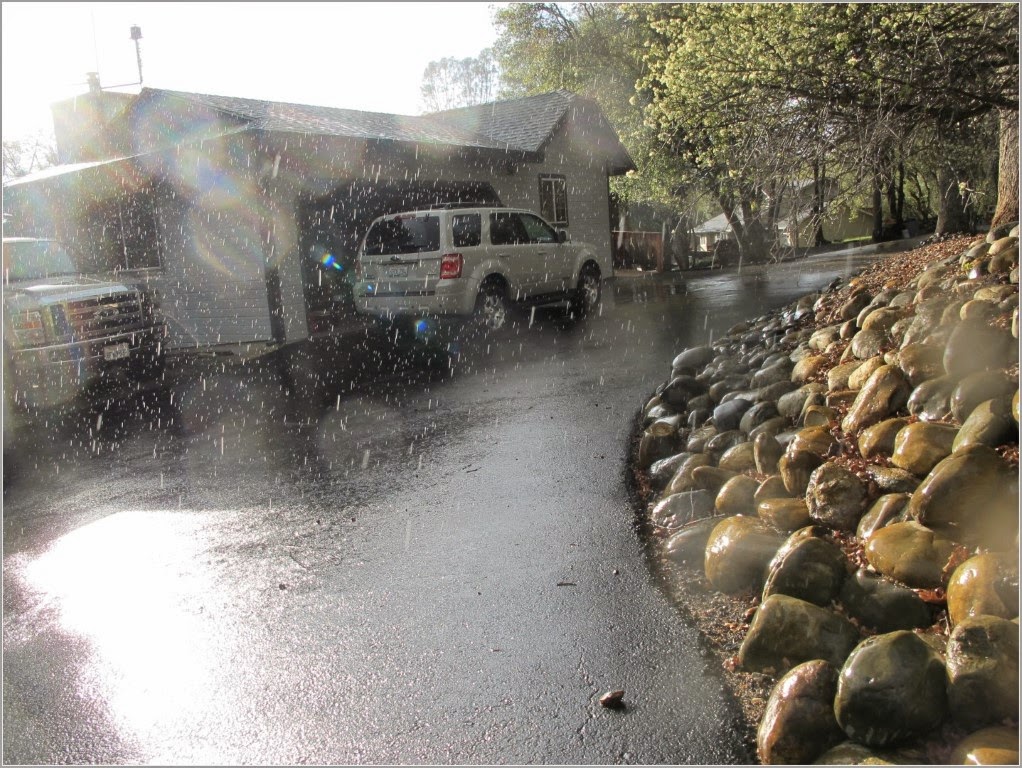 The next morning (perhaps it rained all night but I forget) I had to head to The Little City Down the Hill for a couple of noteworthy doctors' appointments. I've been waiting since the end of October for an appointment with a gastroenterologist to see what can be done for the killer acid reflux I frequently have. (Yes, I've taken just about anything you could suggest to quench that fire. I may be taking all of them simultaneously right now.) The nice young doctor introduced himself by his first name. Before suggesting any treatment he will do an endoscopy of my esophagus and stomach next week. It may sound strange, but I'm excited about it and the possibilities for fixing what ails me.

Later that morning I saw my oncologist (breast cancer) and I am done with treatment! Really, only a tiny pill every night for five years. So little compared to what many go through. Nevertheless, I blame the little pill for achy joints and fuzzy memory, so I'm hoping suppleness and genius will return. When I asked my previous oncologist about that, he said, "You will be five years older, you know." He said it with a twinkle in his eye, so don't anybody get offended on my behalf.

We -- Sister, Brother-in-Law and I -- went to a benefit taco bar dinner Saturday evening and passed this flowery tree, silhouetted against the gray evening sky. I figured it would be too dark when we came out for pictures. 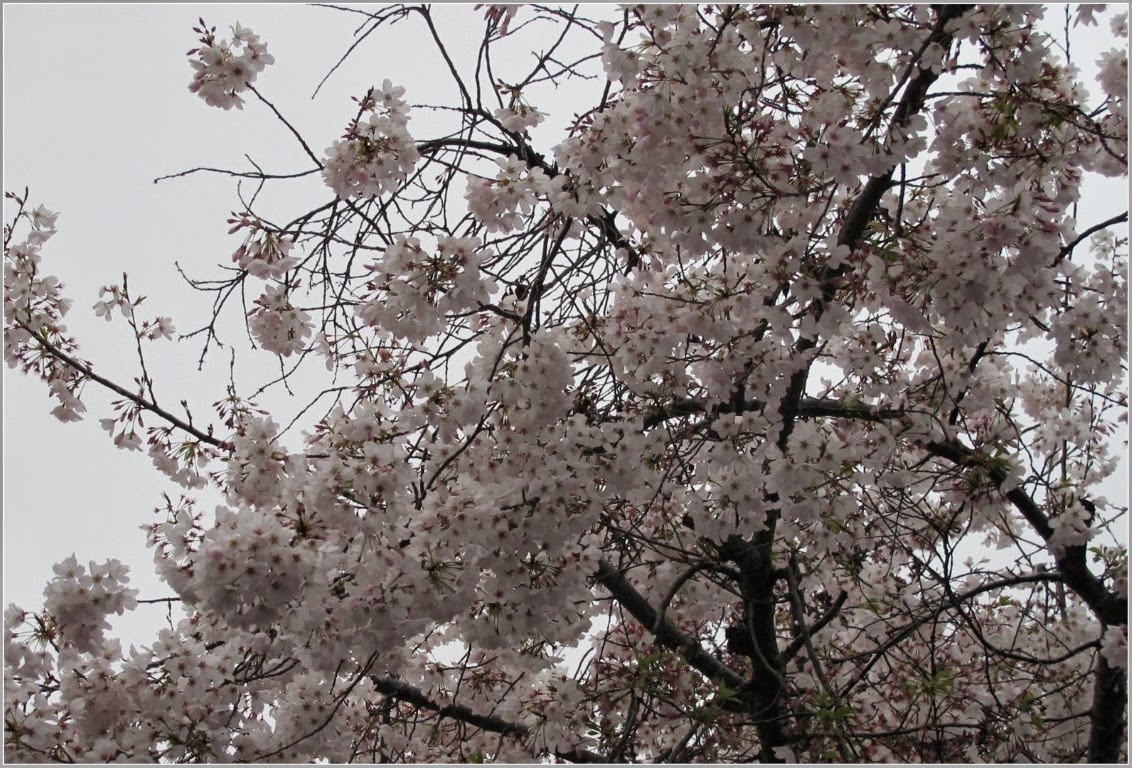 The problem wasn't with the darkness. It was pouring rain. I'd left my raincoat home.

The next morning, the feral cats follow the puddle of sun and huddle together. I'm shooting from a window, away from their food bowl or they would be swarming at the other door. Two of them are aware of my presence . . . 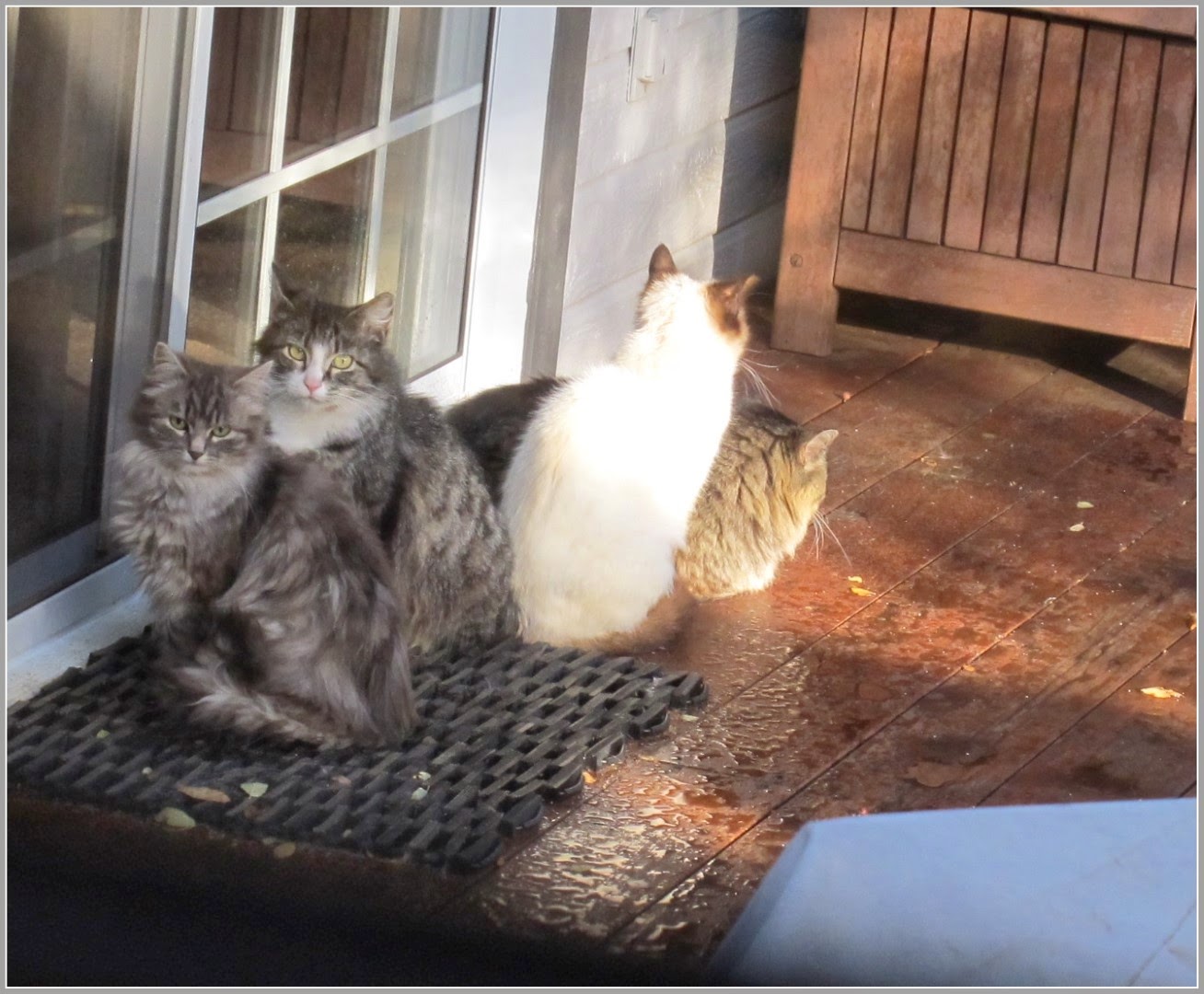 . . . But something attracts their attention in the opposite direction. 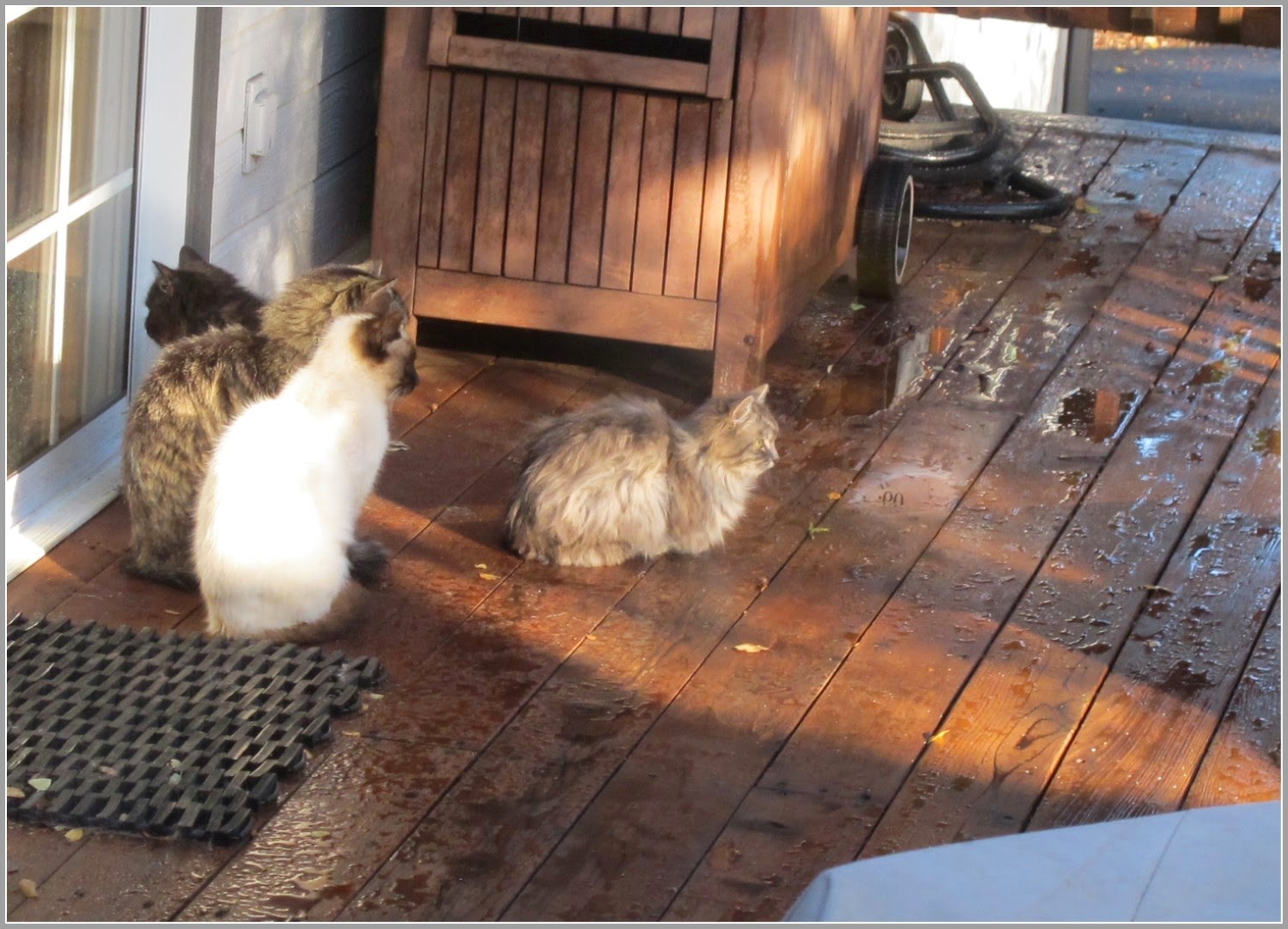 The black kitty is heading out as the others contemplate following. 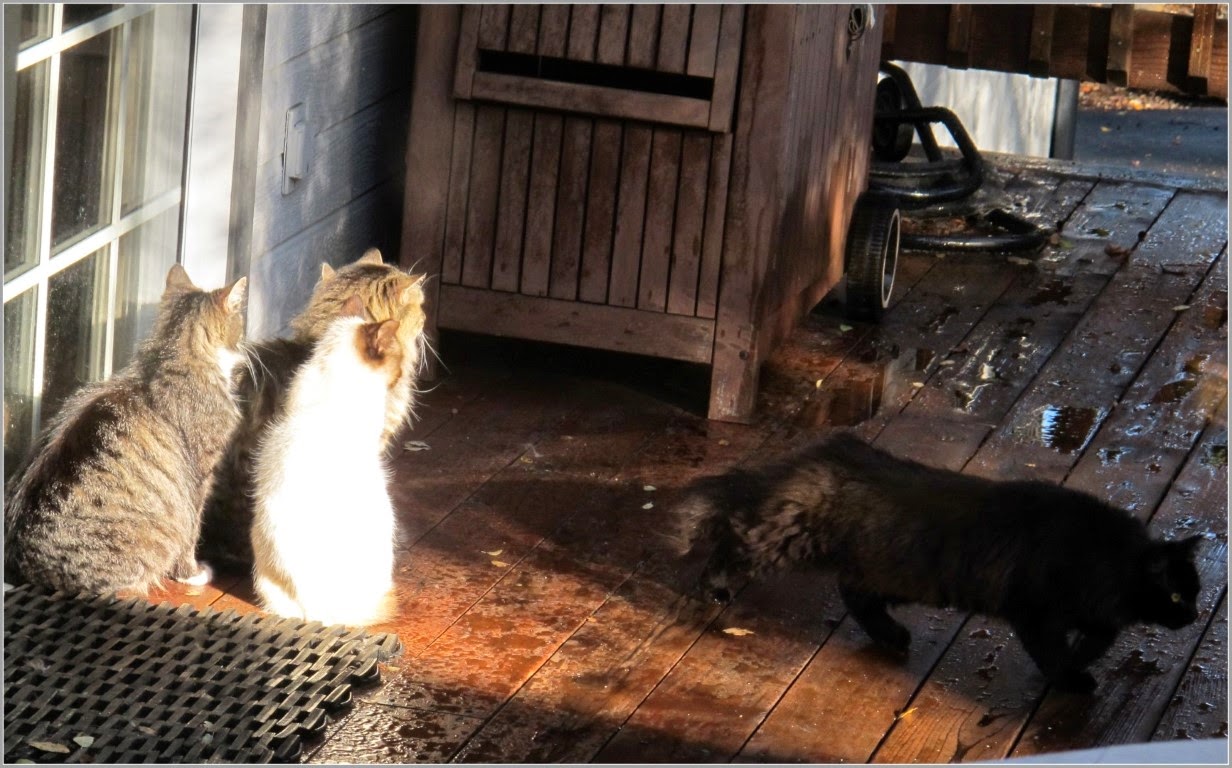 We were all tantalized Tuesday morning when giant snowflakes drifted down for about an hour but never stuck. It created quite a flurry of comments and sightings on Facebook. But we were promised a better storm for the next day and when I awoke Wednesday morning, little faces were peering in the slider with a backdrop of snow. 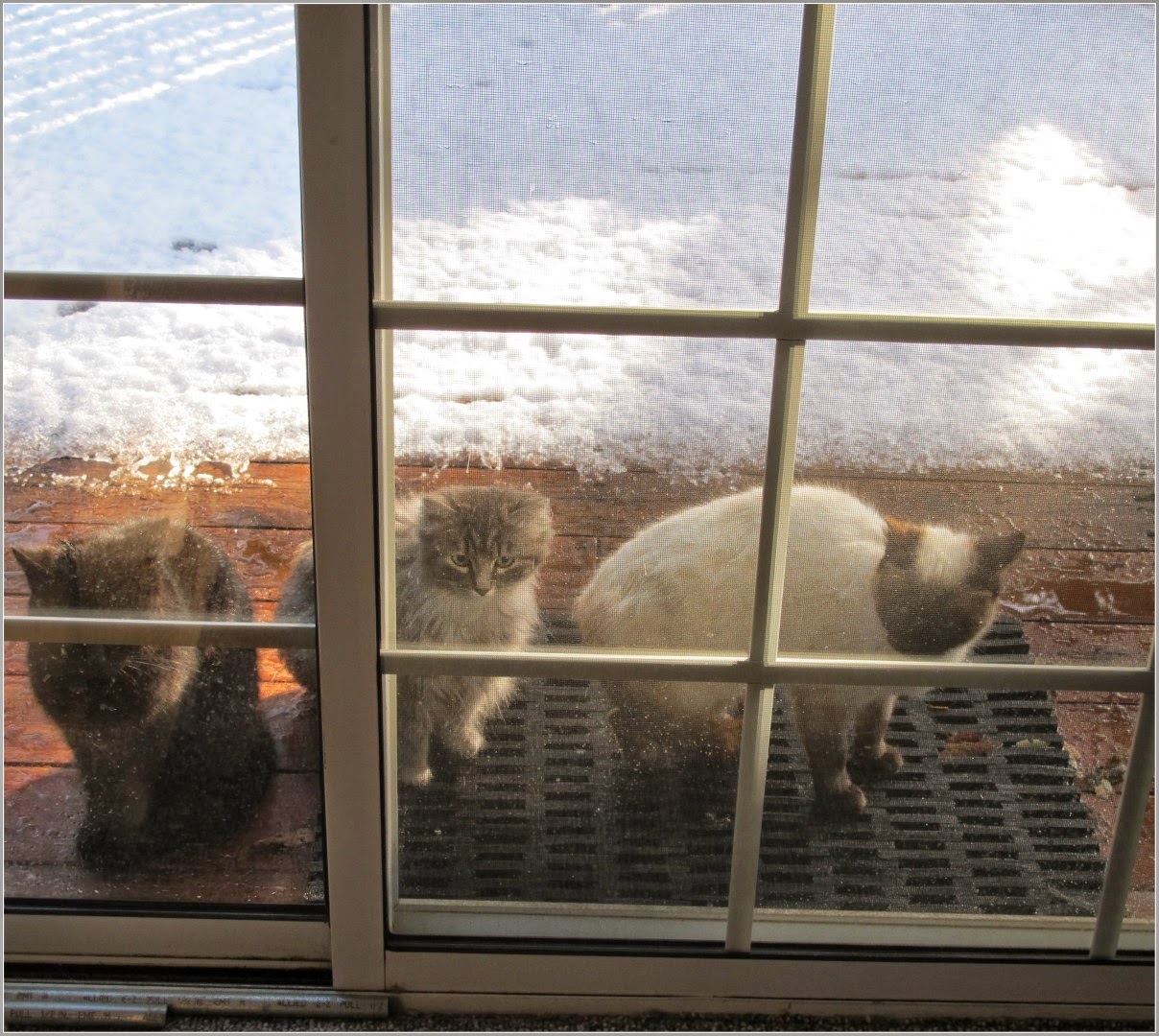 They were just hanging out for the day. It looks from the paw-prints in the snow that a raccoon raided their food plate this morning. 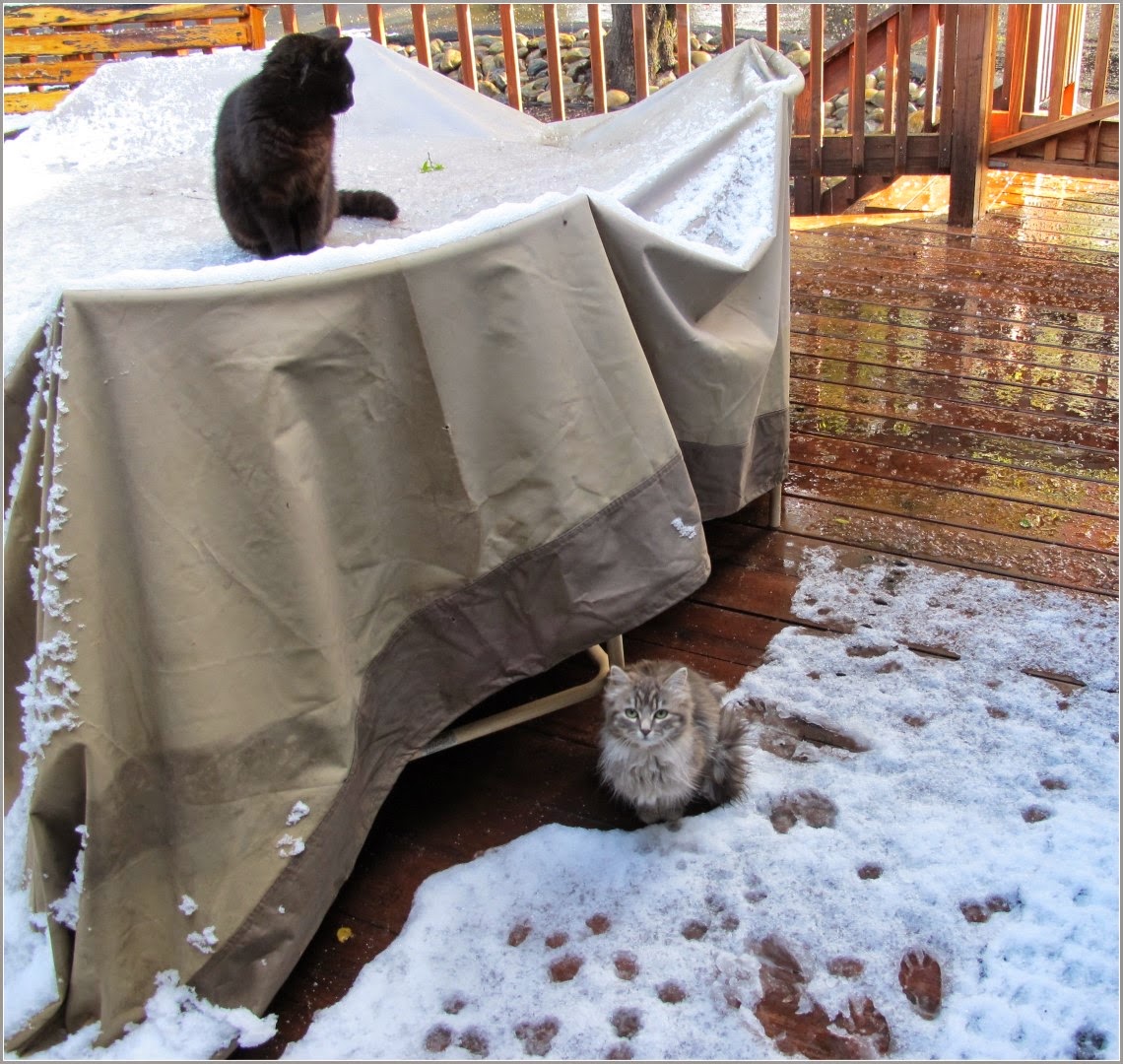 Henley looks out the front at the snow. 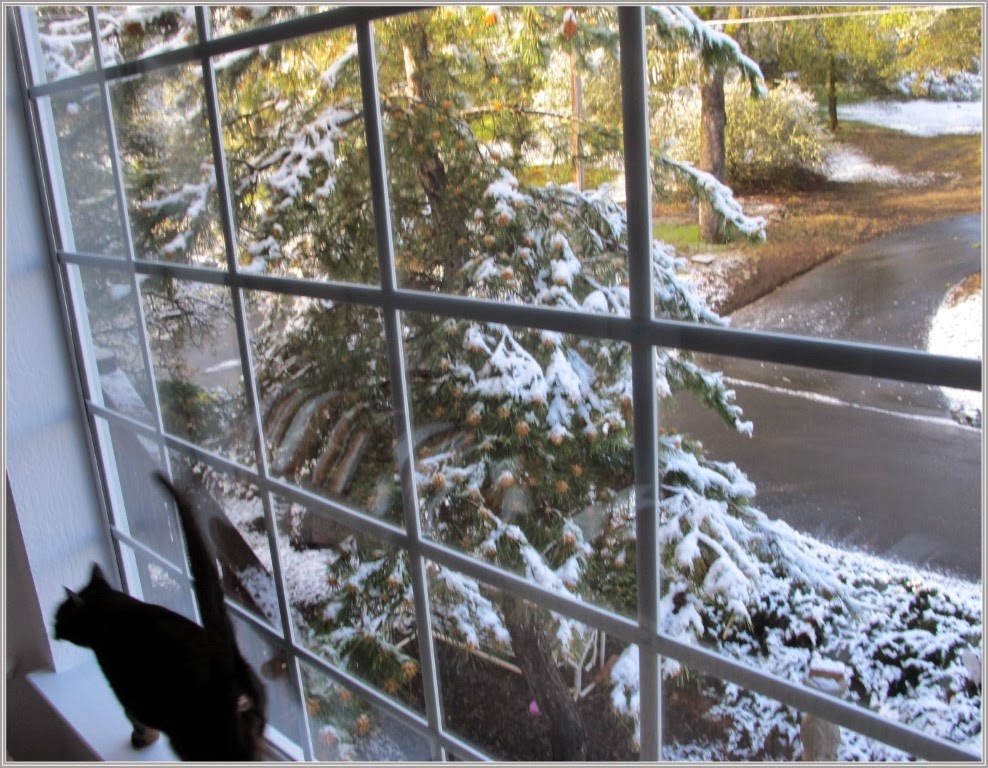 Sami suns. She runs toward me when I bring out the food now, instead of away, so perhaps I've been forgiven for all that capture-spay process. 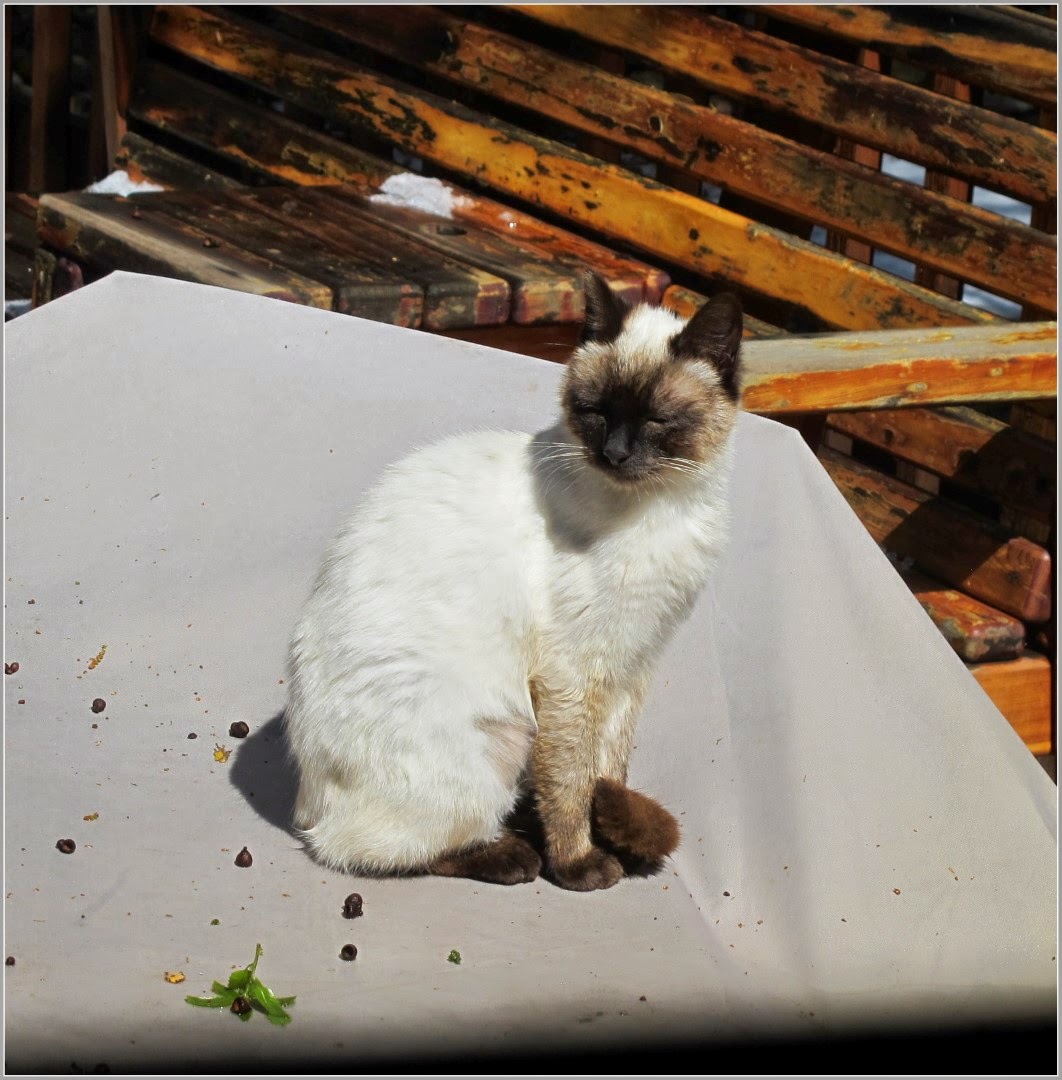 Things were clearing off by evening, not many remnants of our snow. 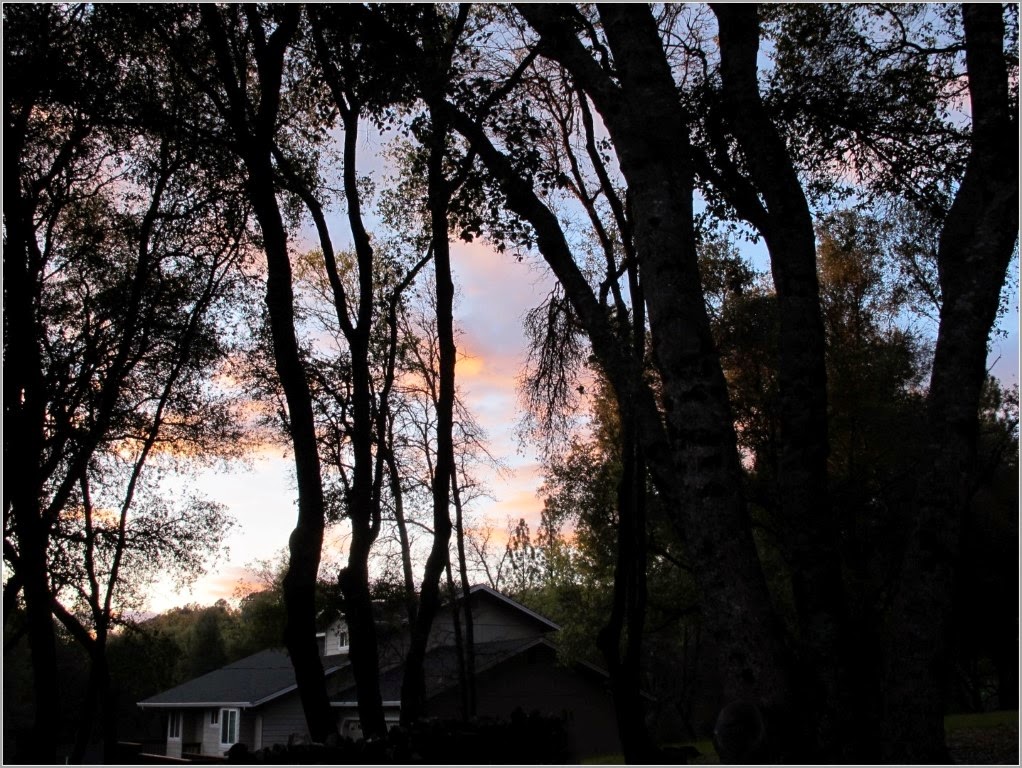 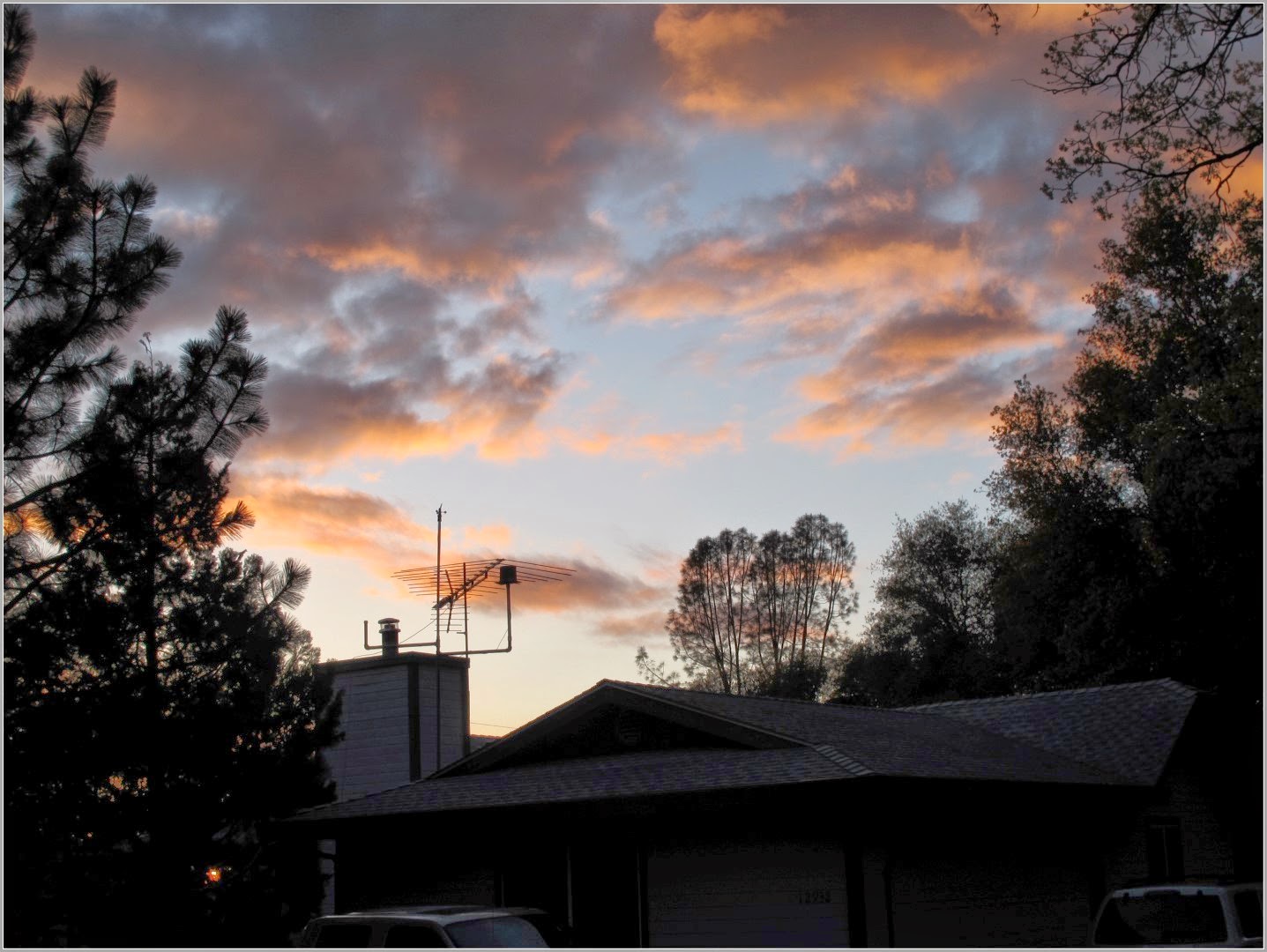 This week, the tulips at the Little House have opened. 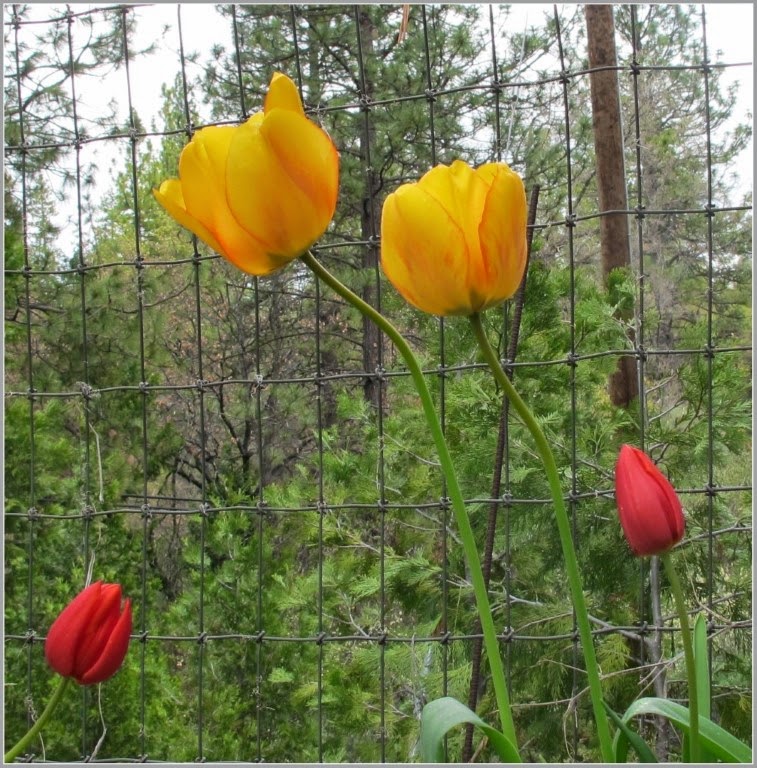 My taxes are underway. I had some hurdles at the start but it looks like there is a way clear, even if I have to file an extension to locate some missing information. And Spring Quilt Camp is coming up before long.

It's time to call it a night.