This little girl, known officially at Little Gray Kitty, will learn her future in the morning. Will she come home spayed and put together to go to her forever home with Daughter and get a real kitty name? Or will the bulging hernia near her groin be irremediable? 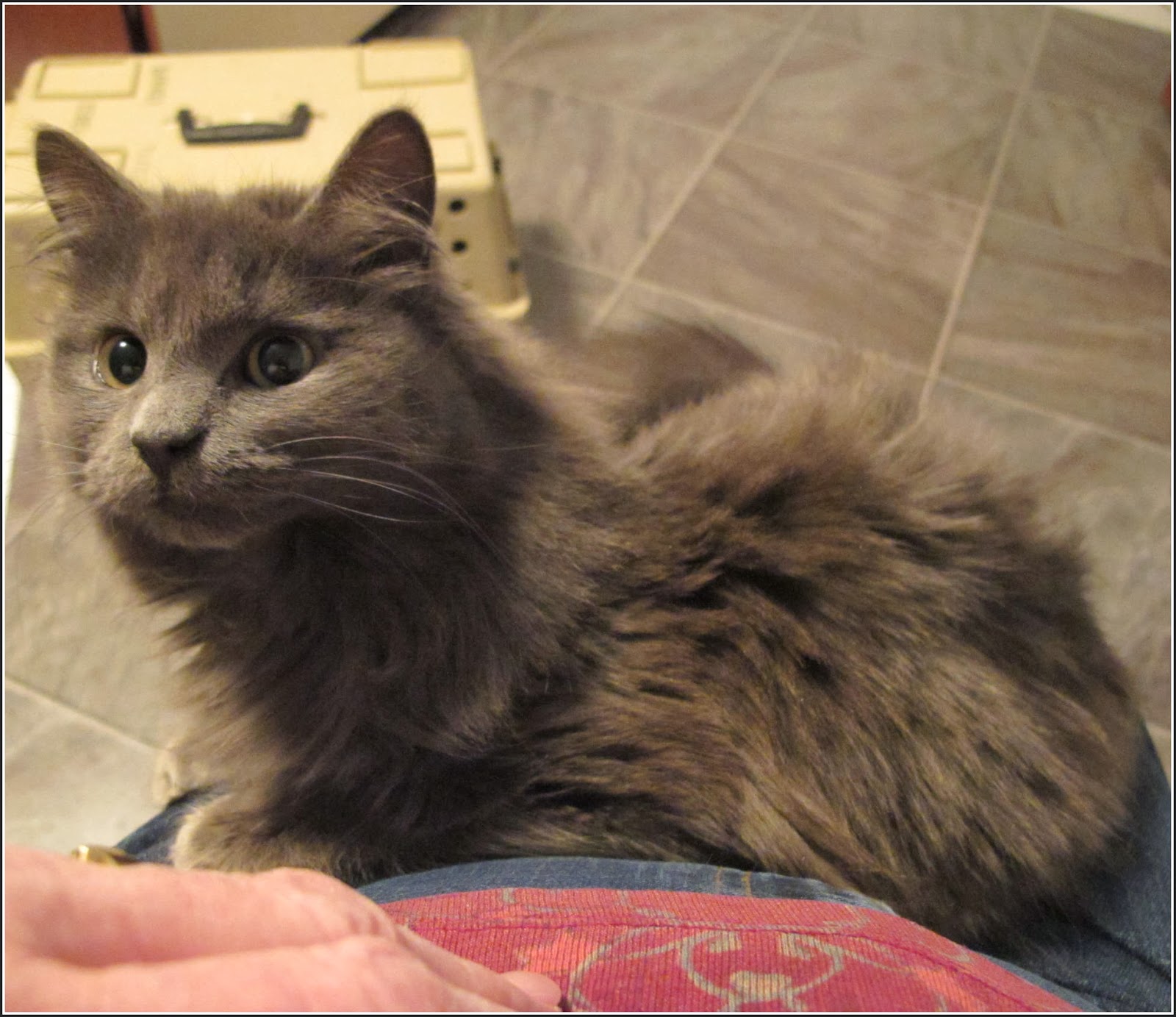 She got sent back home from her first visit to the vet hospital with antibiotics for an upper respiratory infection and instructions to get her eating, peeing and pooping. And it wouldn't hurt to tame her enough to be handled. She does all that, and she comes running and meowing when I go into her room. I hope she's well enough for all that is to come.

Our parade of rain storms fizzled, while I attended to Kitty and other tasks. After the first day, I let Kitty out of her carrier. I found her hiding place on three separate occasions. She eventually decided I was okay.

This little potted tree confuses February with spring and maybe it's right. 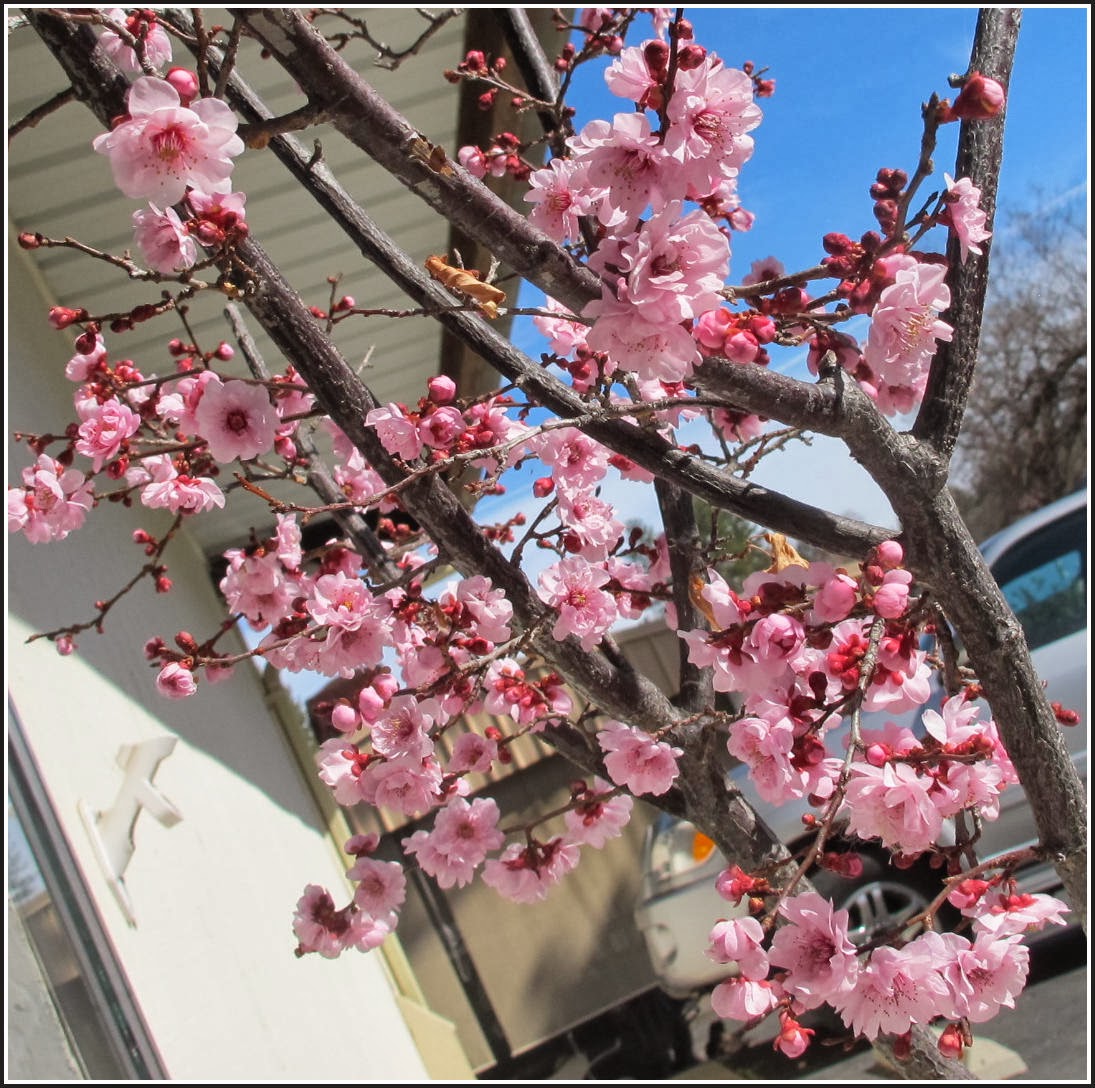 Tom tends to laying pavers and tamping pea gravel between them on the path that will be to somewhere. 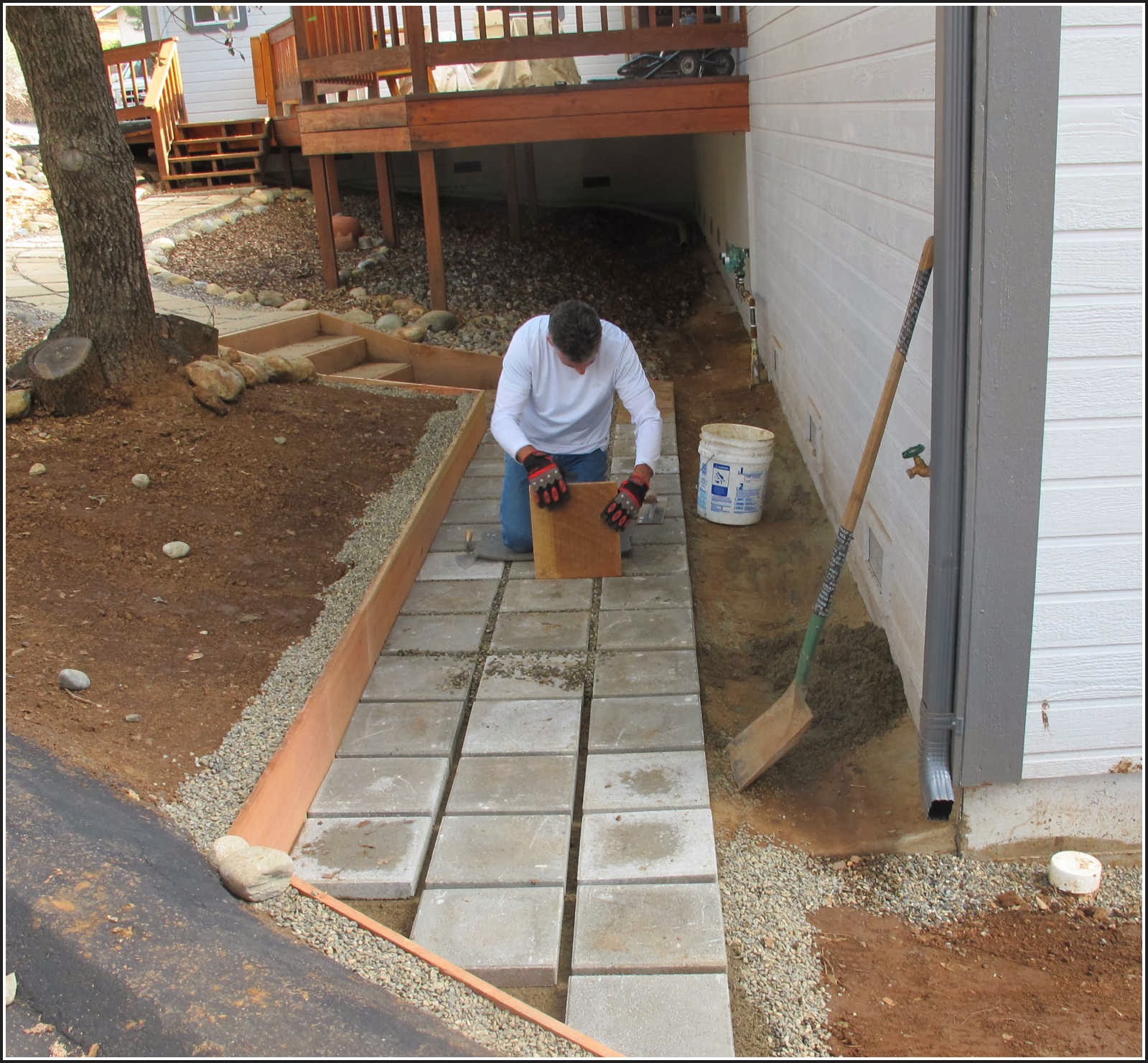 I needed to make a shopping run to the Little City down the Hill, so made it on the same day as French class. I raced through shopping and grabbed a Starbucks skinny triple grande latté and a bite to eat to keep me awake through the evening and for the drive up the hill after dark. The sun went down with spectacular color as I waited for fellow students and the prof to arrive. 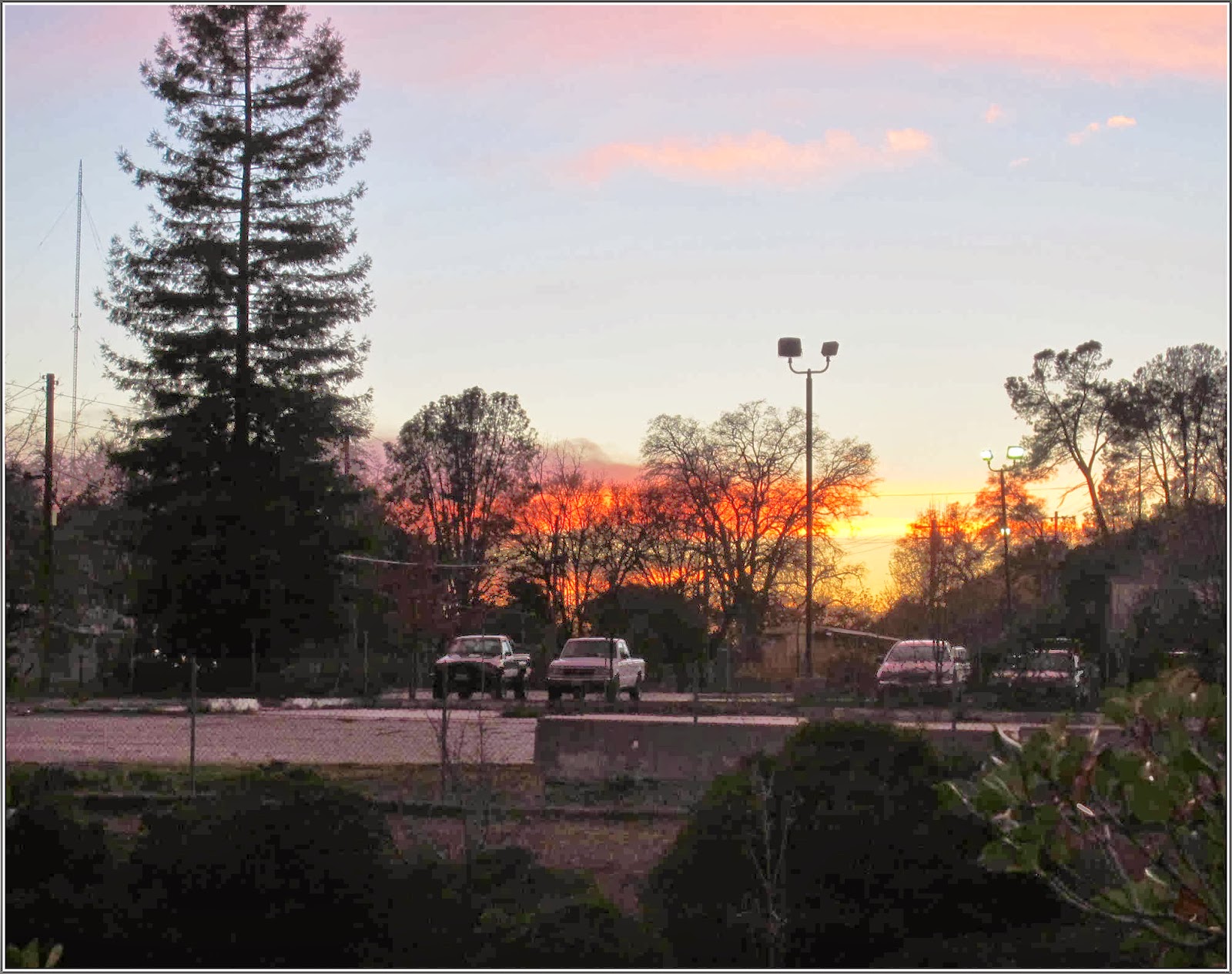 Clouds scudded across the nearly full moon on the trip home. Doesn't that moon look like a glowing eye beneath bushy brows, with a sharp nose reflecting a spot of light, and a goatee? 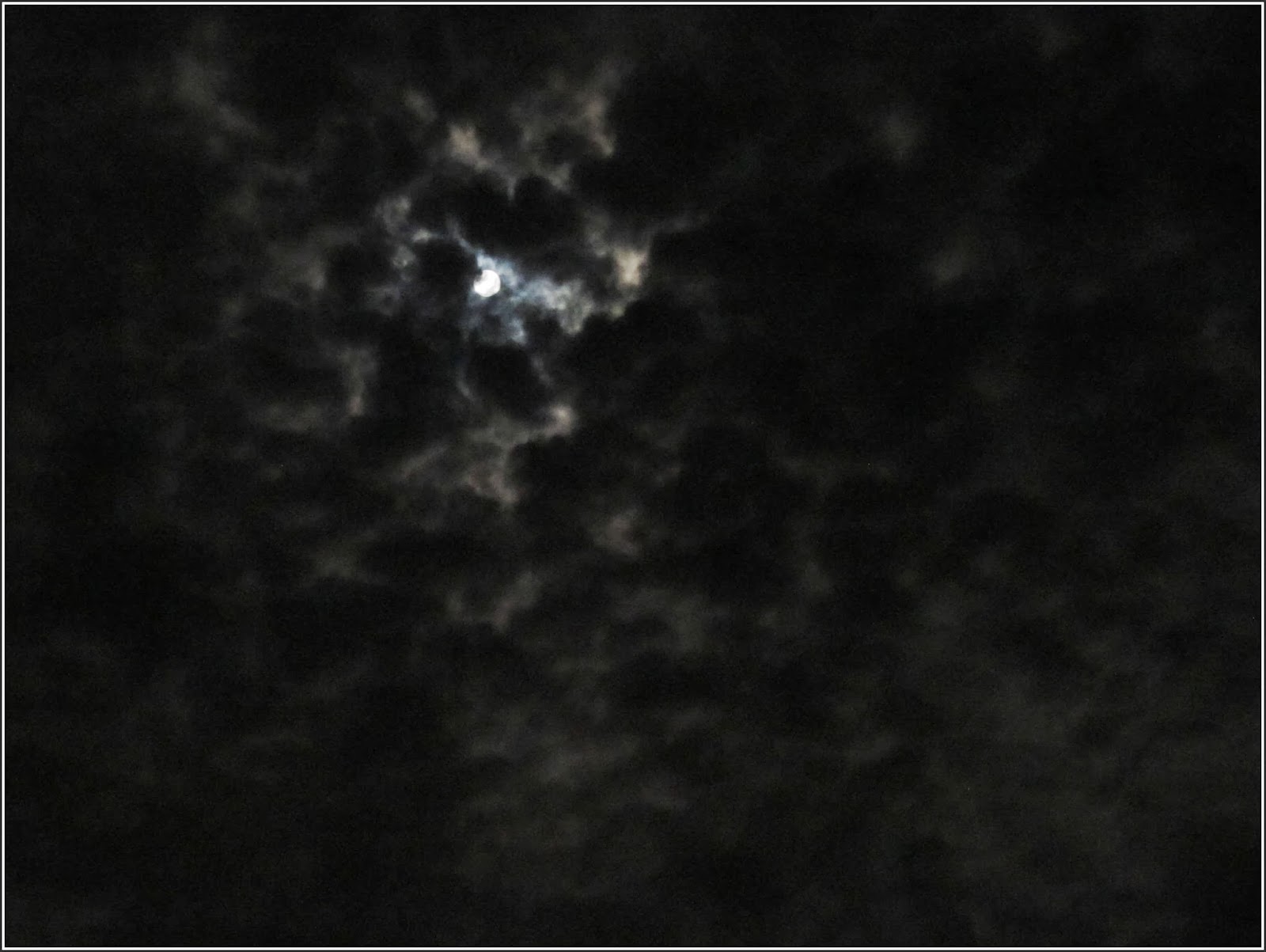 I lazed abed the next morning, waking gradually to morning TV and playing with email and Facebook on my laptop. Tom was scheduled to do some honey-dos in the house later in the day, but I didn't have to get up early for that. I'd told him and Craig earlier about how I captured Little Gray Kitty and mentioned a couple of other ferals I'd like to see captured for spaying, one that a friend would like to adopt, and the other for the Siamese, because as a former Siamese owner, he (I thought) just appeals to me. Since I saw the Siamese on the down side of an encounter with an unidentified cat, that has led me to call her her, thus making capture more urgent. I call it Sami, kinda related to Siamese, spelled in a unisex way.

Anyway, lazing in bed I suddenly saw Craig racing up the driveway with a flailing Sami held by the scruff of her neck. Tom came racing up behind him and they tell me it was a major struggle to get her locked in the cat carrier on the deck. She'd wandered into the basement (curiosity killed the cat), they closed the door, and it took a major effort to corral her. She's still so traumatized that I'm holding off taking her into the vet for another week in hopes I can gain a bit of her confidence. 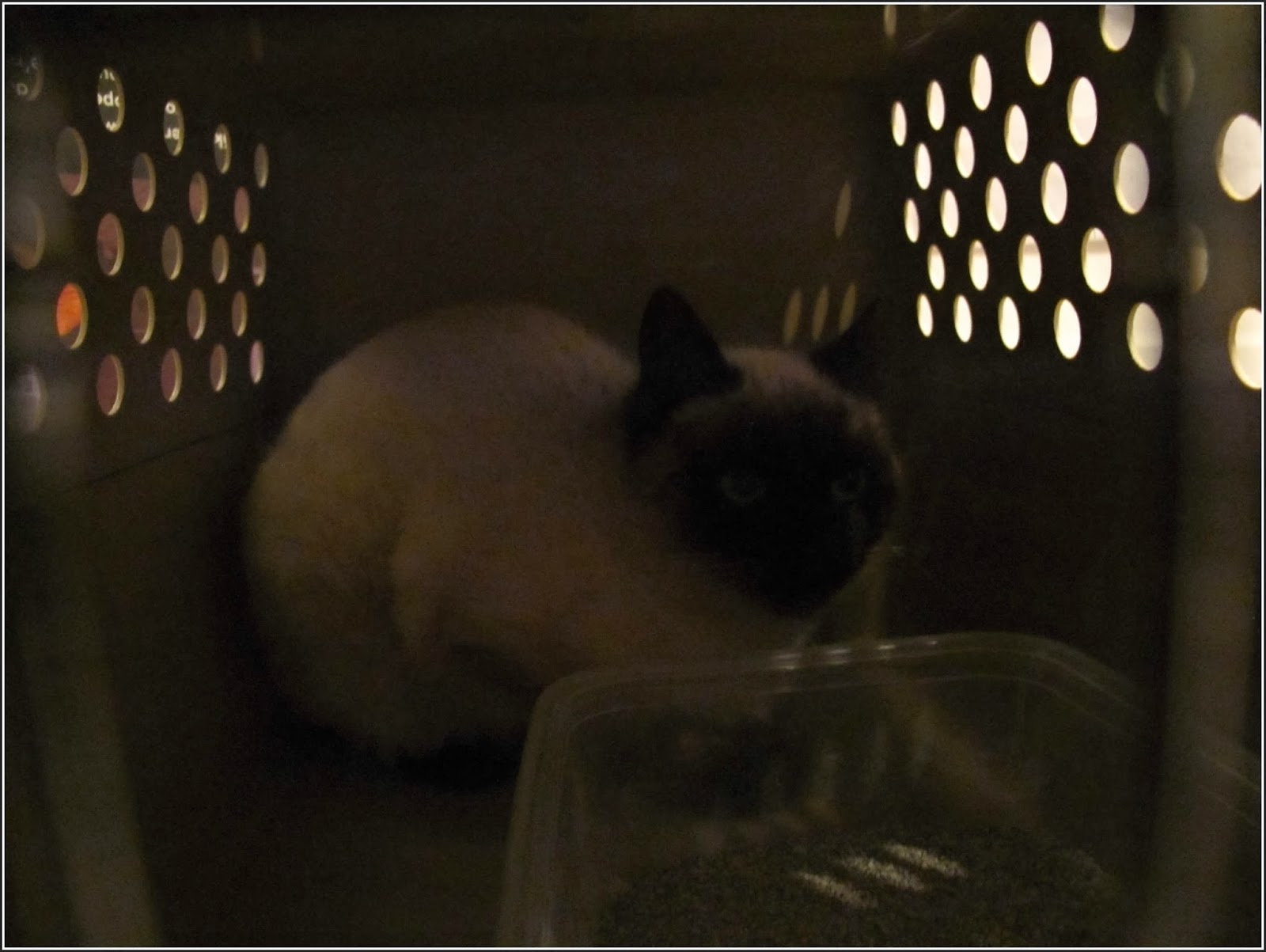 I left Sami's crate door open from the start. When she disappeared and a casual hunt didn't find her, I eventually discovered she had migrated into Little Gray Kitty's carrier, on which the open door faces away from the way I enter the room. She is coming out to use the litter boxes.

People helpfully suggest I get a humane cat trap and bait a feral with a can of tuna. How do I get the one I'm aiming for to be the one that goes into the trap? 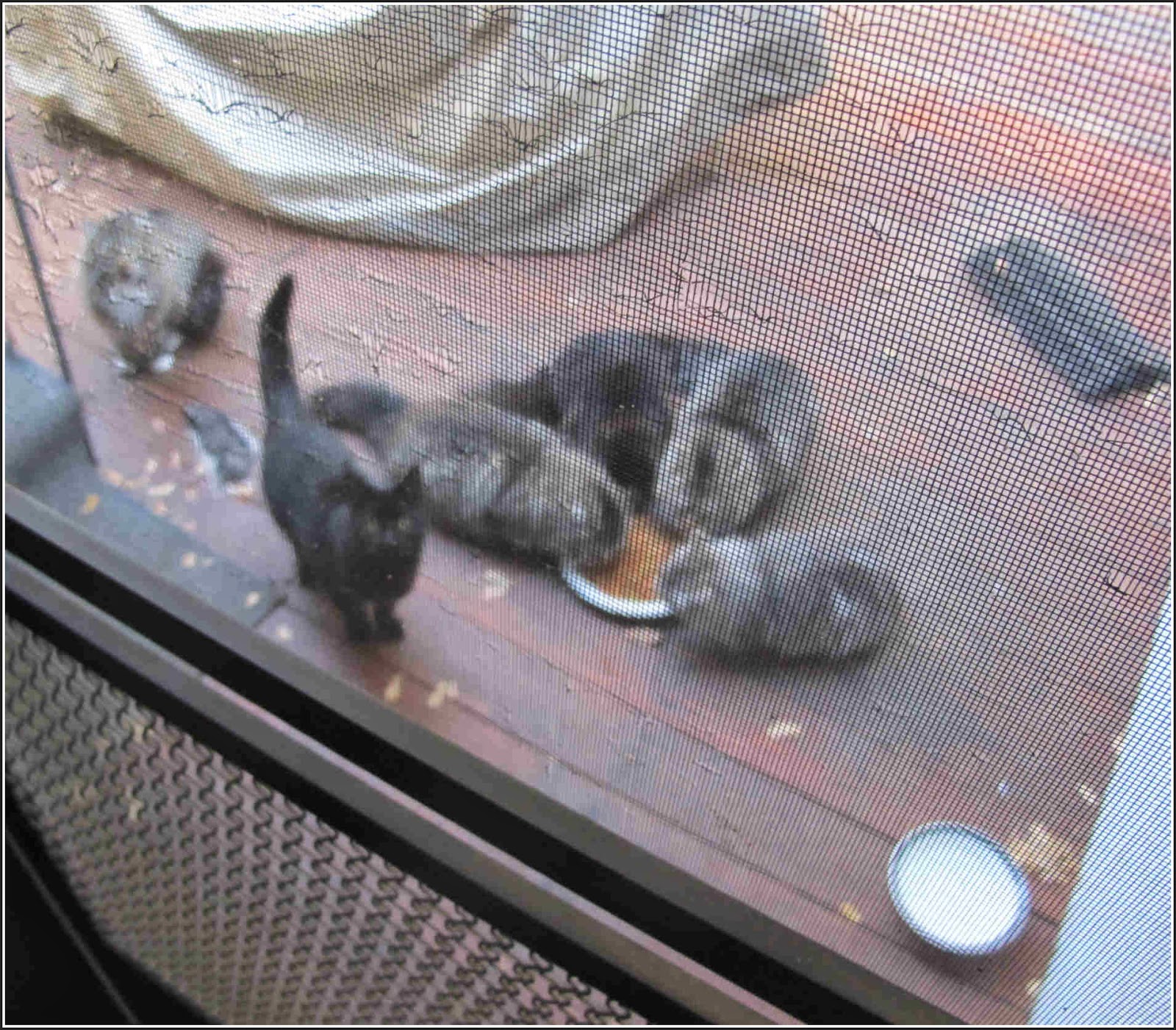 Tom has been placing pavers; Craig has been tossing stones. We're at a pause for delivery of some more pavers to Our Little Town. I finally took the new chairs out of their boxes and assembled them. It took about 20 minutes to get one out of the box and 10 minutes per to assemble. A lot more minutes to clean up the debris. 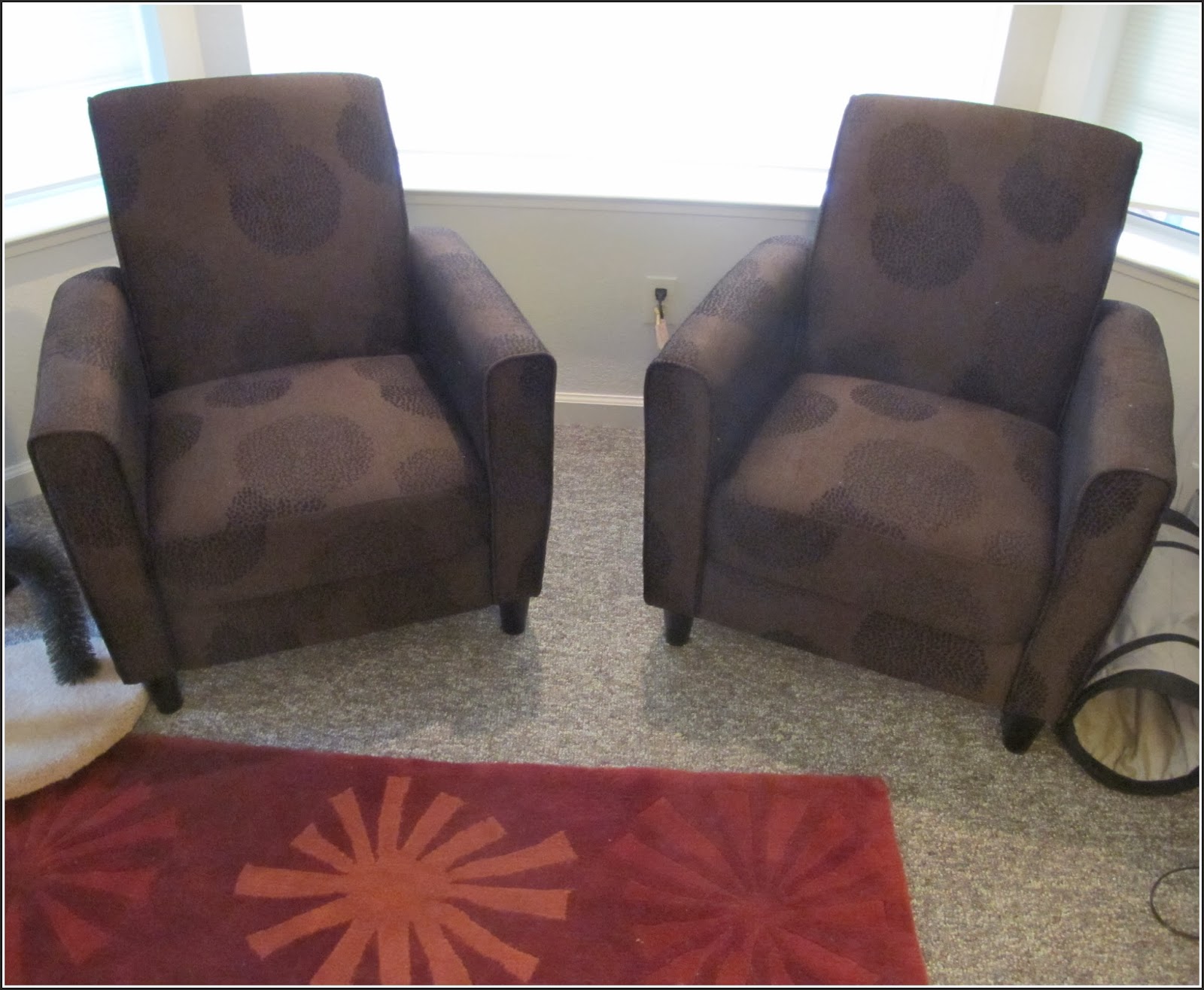 Here they are in their context. I need something between them for people to put a beverage on, but waited to see what size or style would fit. I bought this nice indoor fountain awhile ago, but how do you empty your indoor fountain? Or do the cats drink all the water? 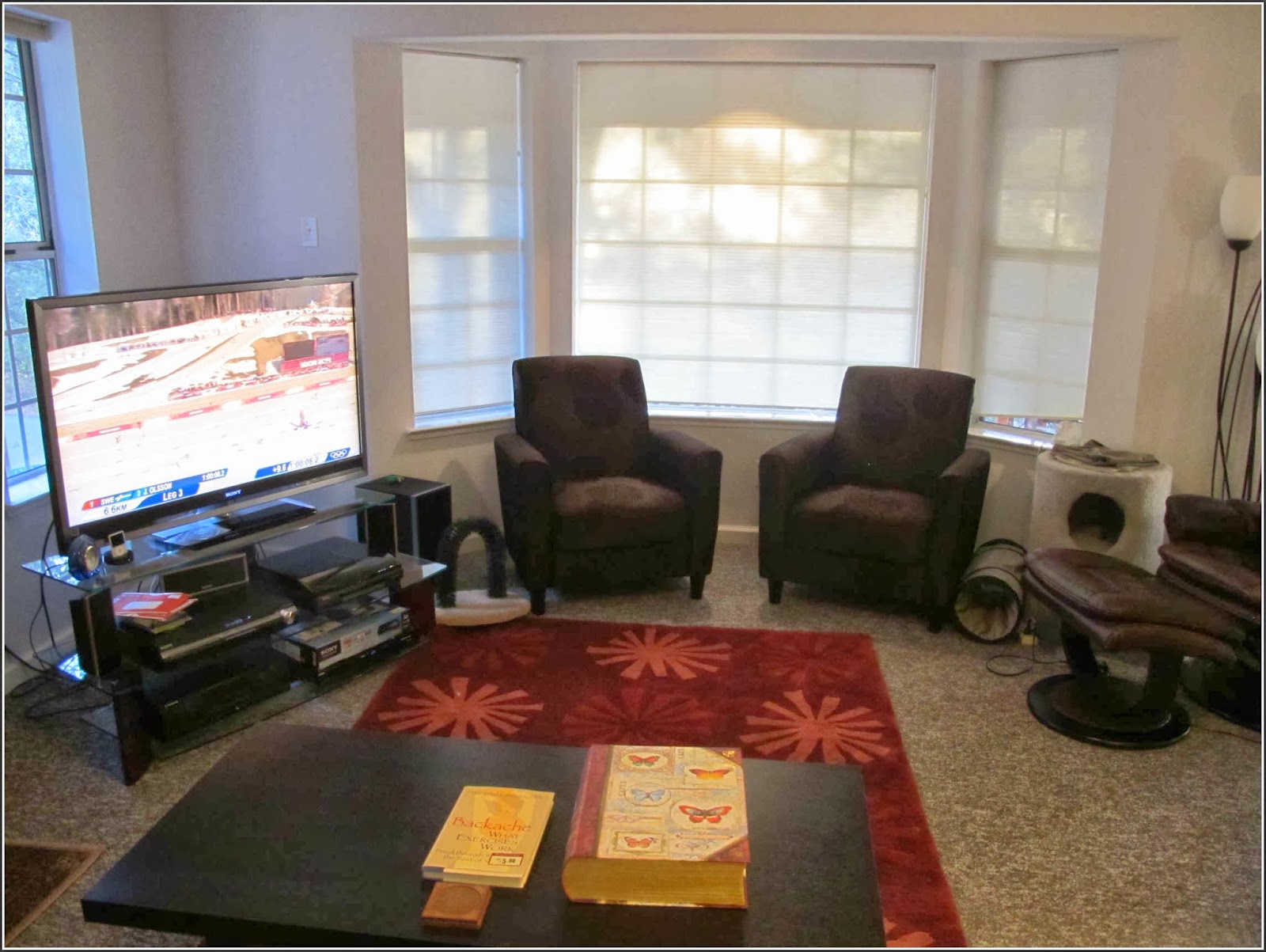 
One of Tom's tasks was putting appropriately spaced hooks in a thin board, then mounting it level on the wall, so I can hang a design wall on it. I didn't take it's picture, but the design wall is visible hanging down on the right of this photo. I fell for these paintings related to music in an exhibit at Stage 3 Theatre and planned to hang them with my guitar. The really bright abstract is actually something that was randomly on my TV, or ???  Something from the Olympics. 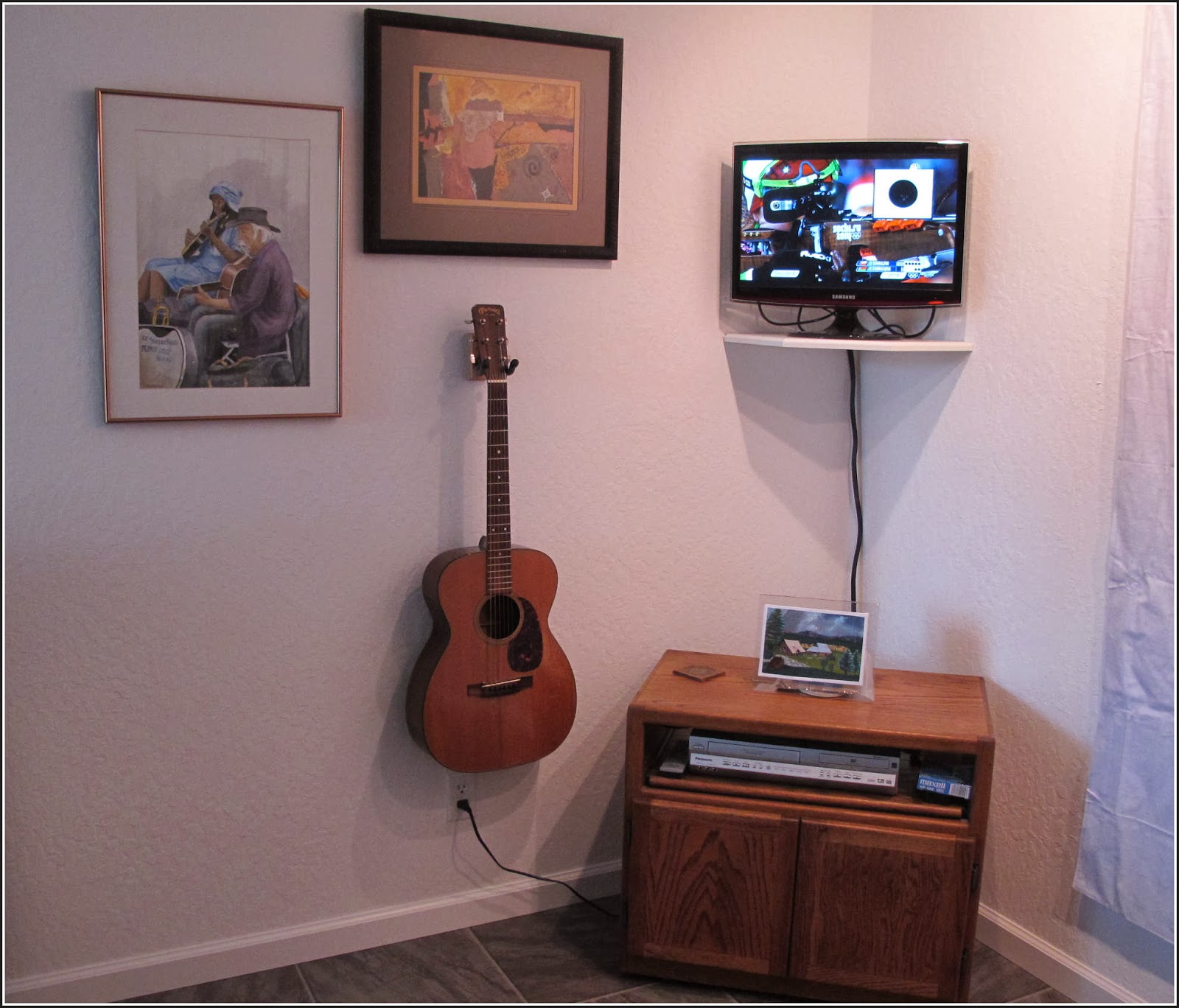 I cuddled her for awhile this evening. She has to fast after midnight. She has the cutest silver nose and paws. 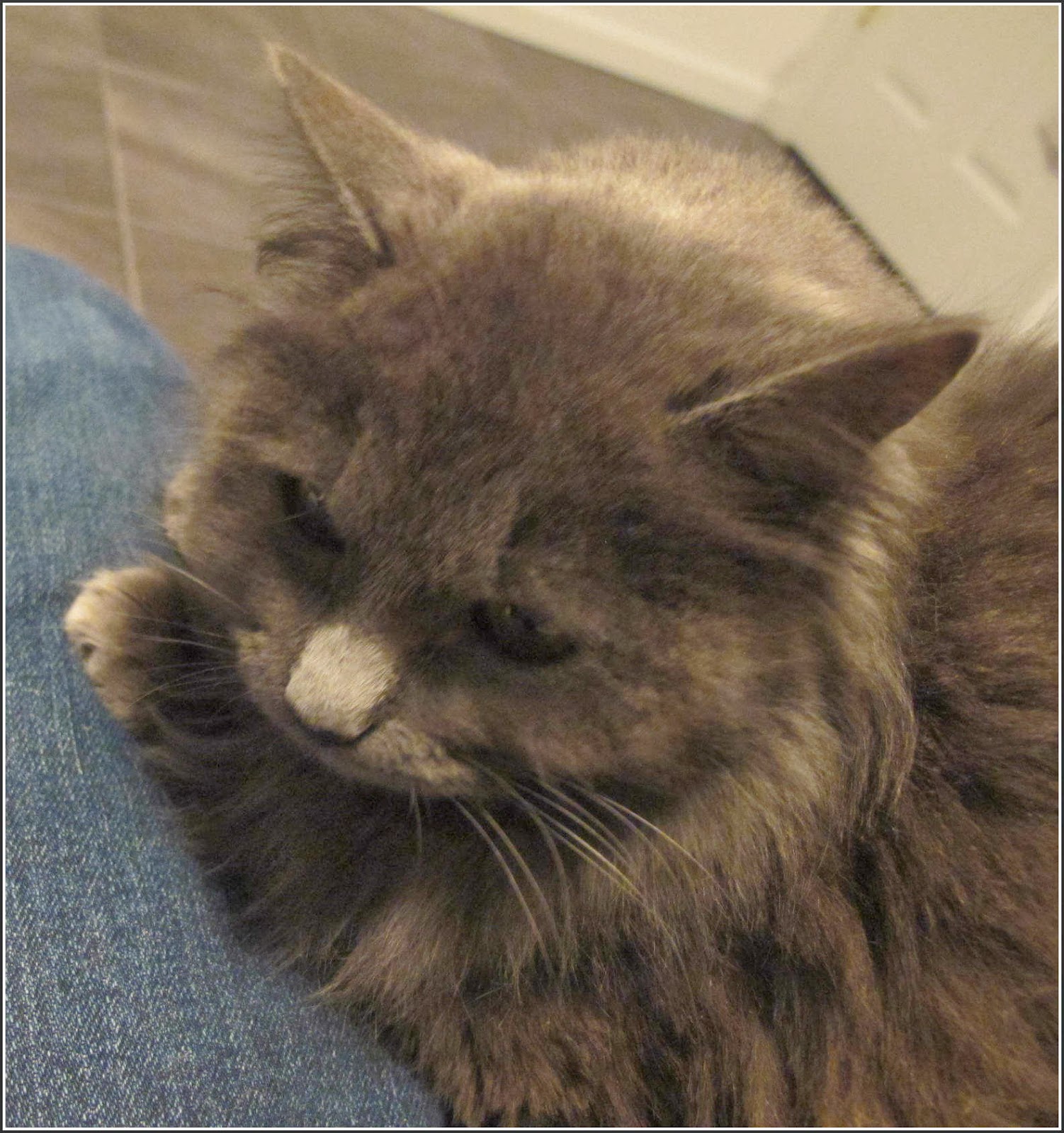 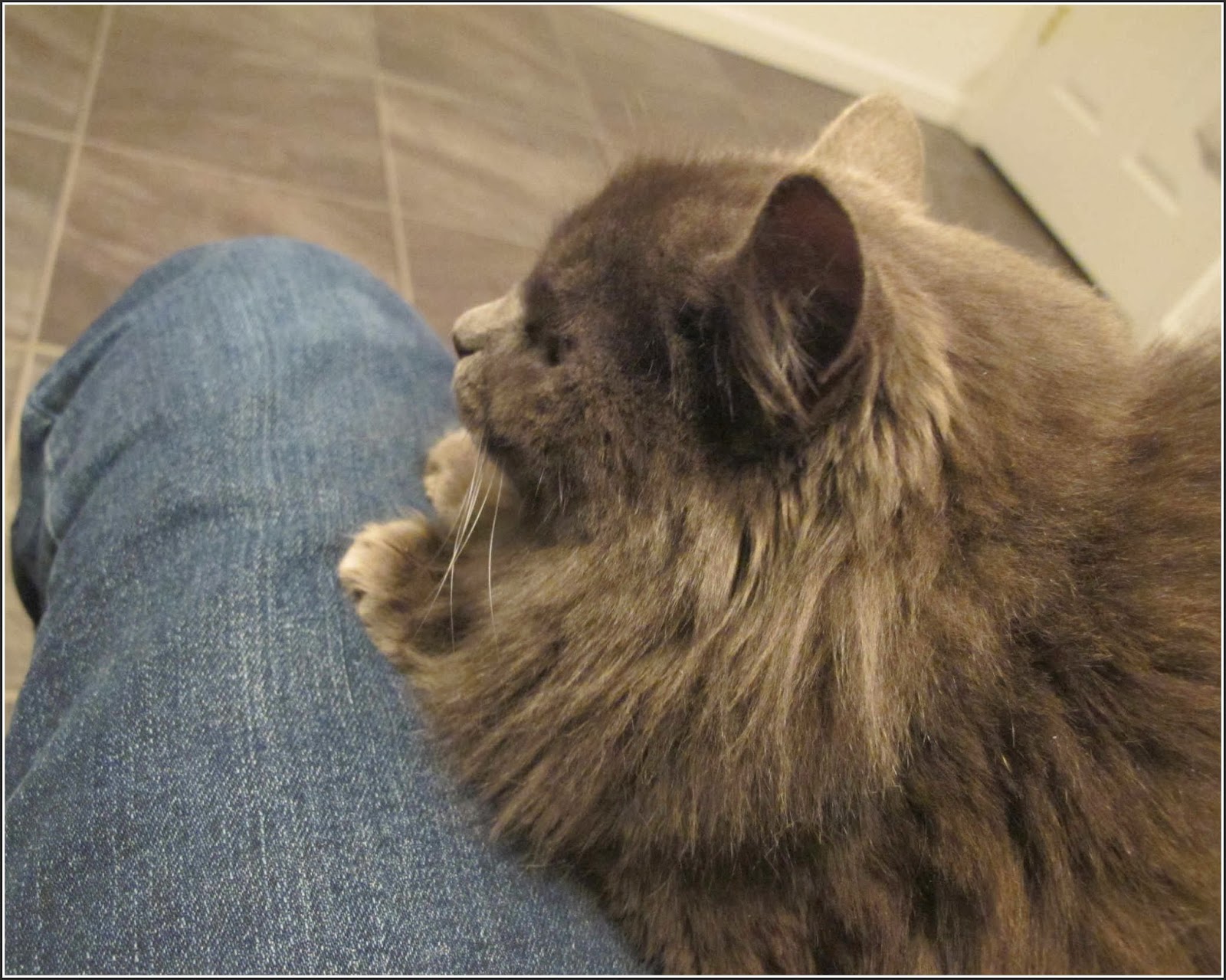 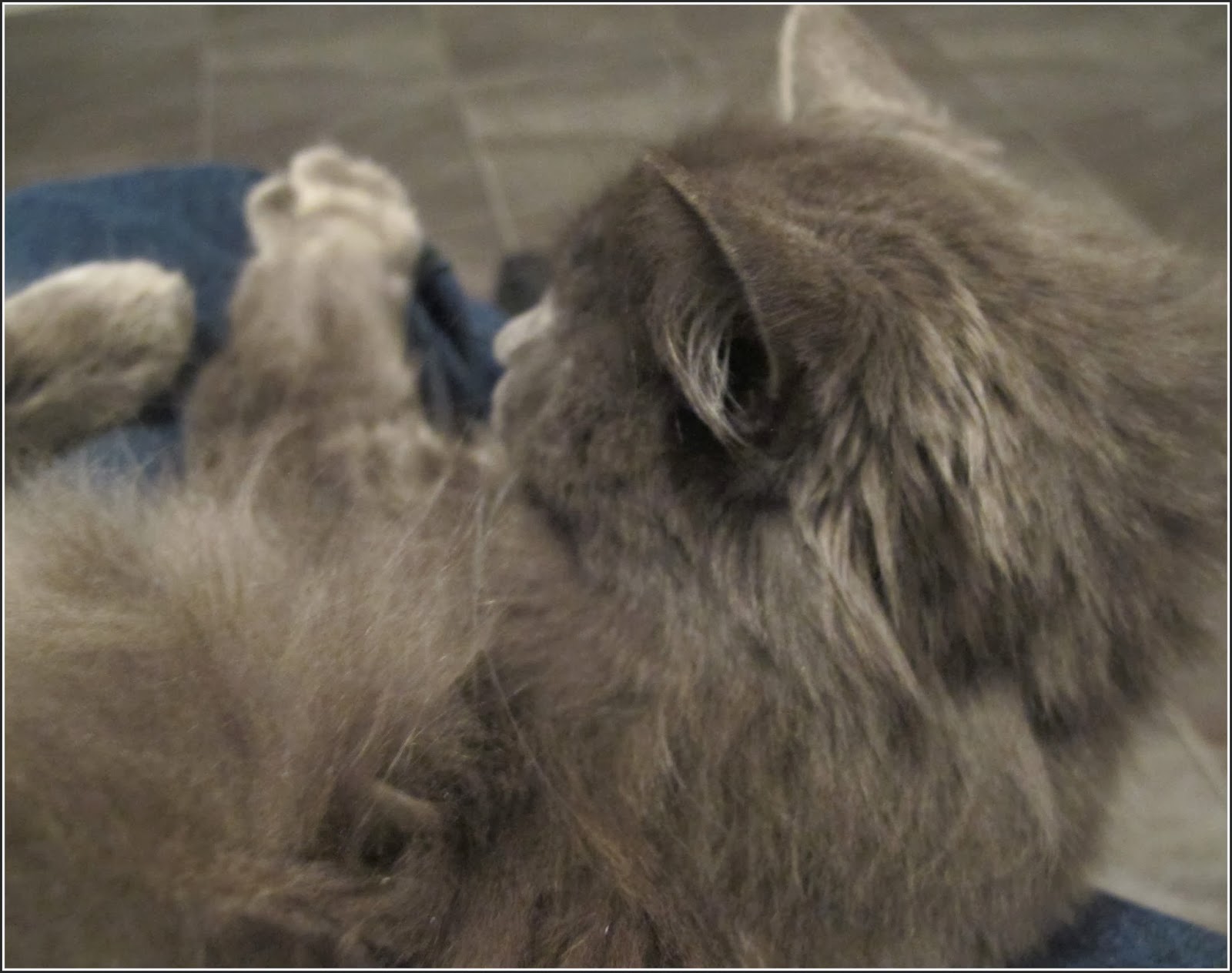 (Can you tell I might be a little worried about the baby?)

RIP Sue Rowland, author of the blog "My Incredibly Unremarkable Life," whose life had been quite the opposite. She was my original inspiration to blog.