Waiting for something to happen . . .

[Spoiler Alert: There will be cats and kittens.]

This was one of those gray days that seem suspended in time, waiting for something to happen. There are forecasts. For days they've said there was a chance of rain coming through the area on Saturday. As the weekend drew closer, more and more qualifications and parameters were applied to the forecast, until it shrunk into only snowfall in the Sierras at over 7,000 ft. elevation, with maybe some sprinkles in the foothills. That's us. The foothills. The thick air felt plump with rain.

On the other hand, a written weather forecast predicted heavy, possibly dangerous winds in the foothills from 10 a.m. Saturday until midnight.

We had that big snowfall back in early December that stayed on the ground for days. We had one good patch of rain early. At this point, I don't recall whether it was in the immediate run up to the snow, or earlier. I had the ominous feeling that this fabulous start to the wet season would just dry up on us, leaving us water-short for the rest of the season. So far, so bad. 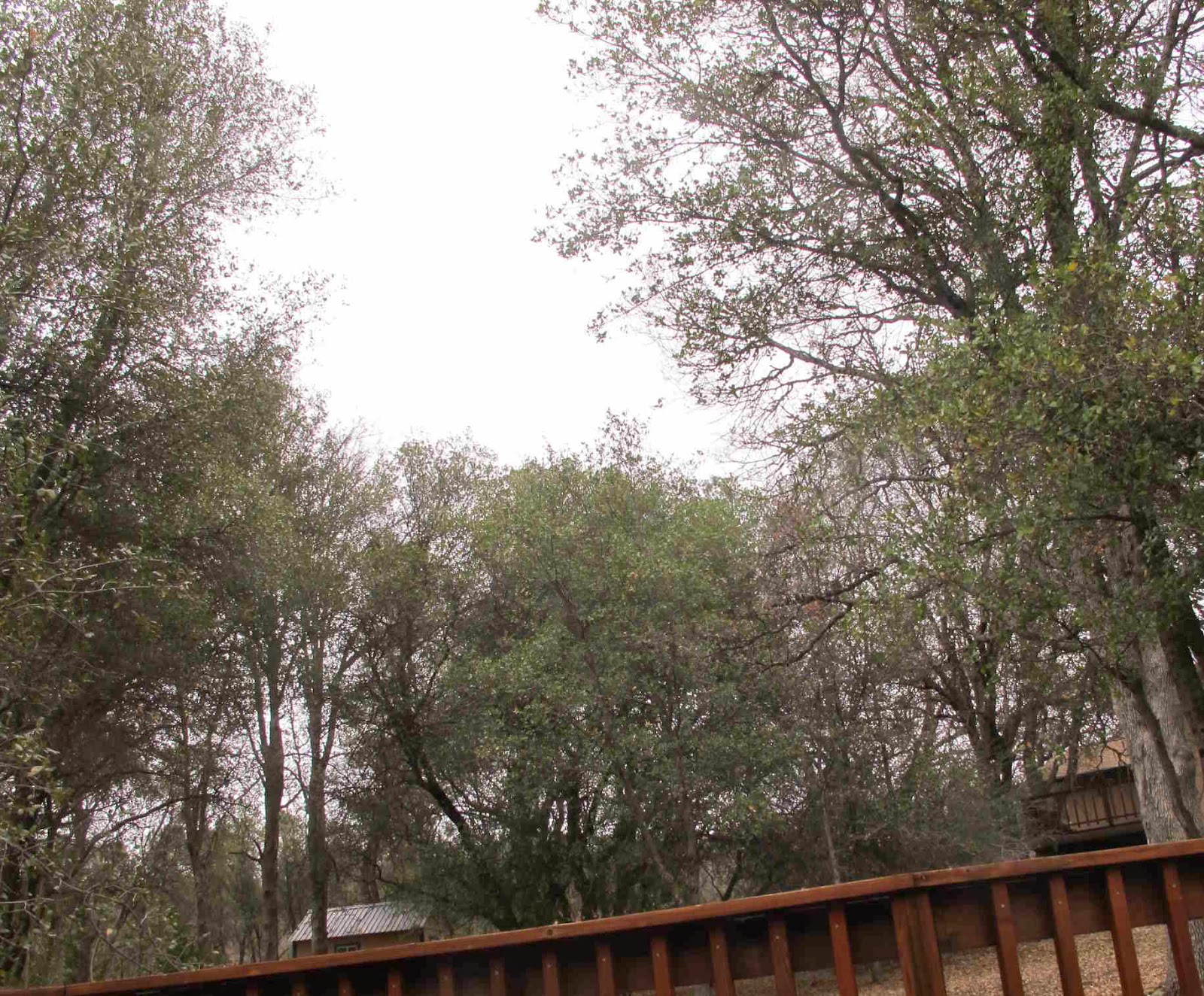 There are cats on the deck, waiting for something to happen. That's the littlest kitten on the rail, the fluffy black one on the table, and you can see a trace of gray ears and back nestled in the chair at the far side of the table. 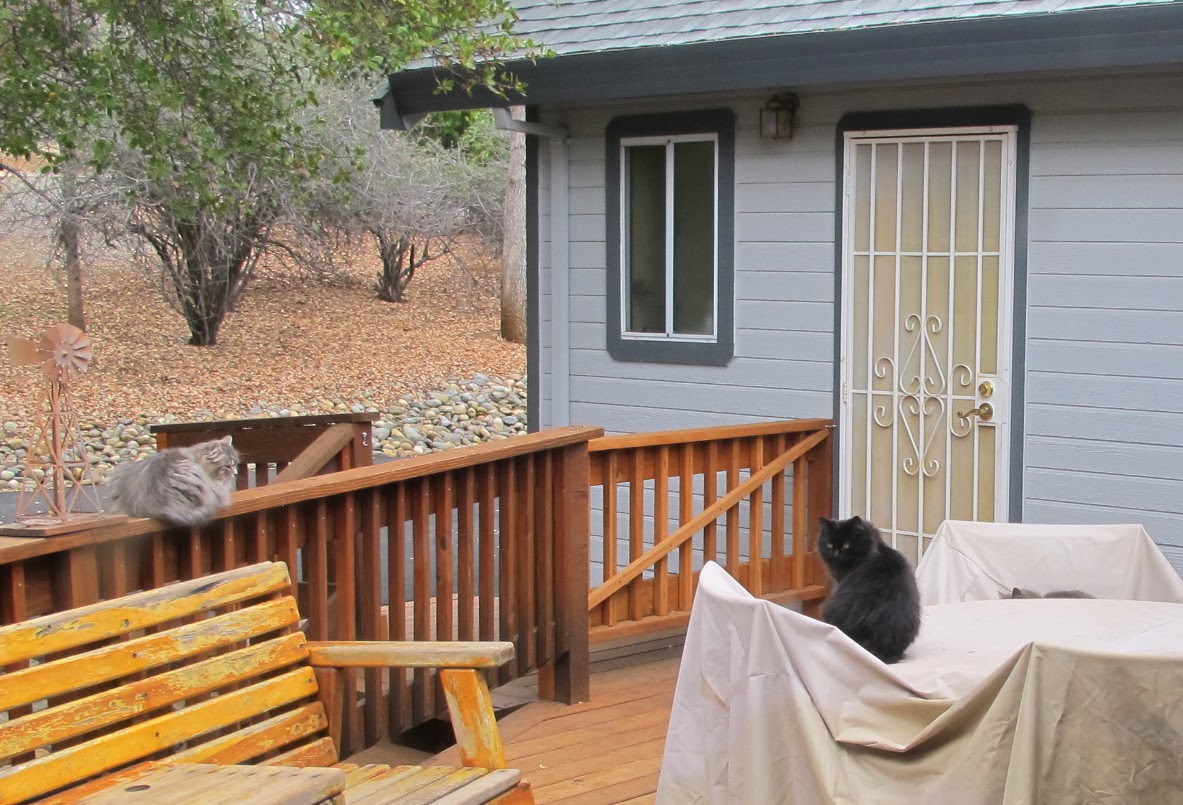 Inside, Henley and Jean-Luc are waiting for something to happen. I was trying to get them in their nest on the bed and their reflection in the mirror. I miscalculated as I hunkered down behind the bed: the real cats are pretty much blocking the reflected cats. I suppose I shouldn't be surprised at my own appearance in the picture, given the non-angle I was shooting from. 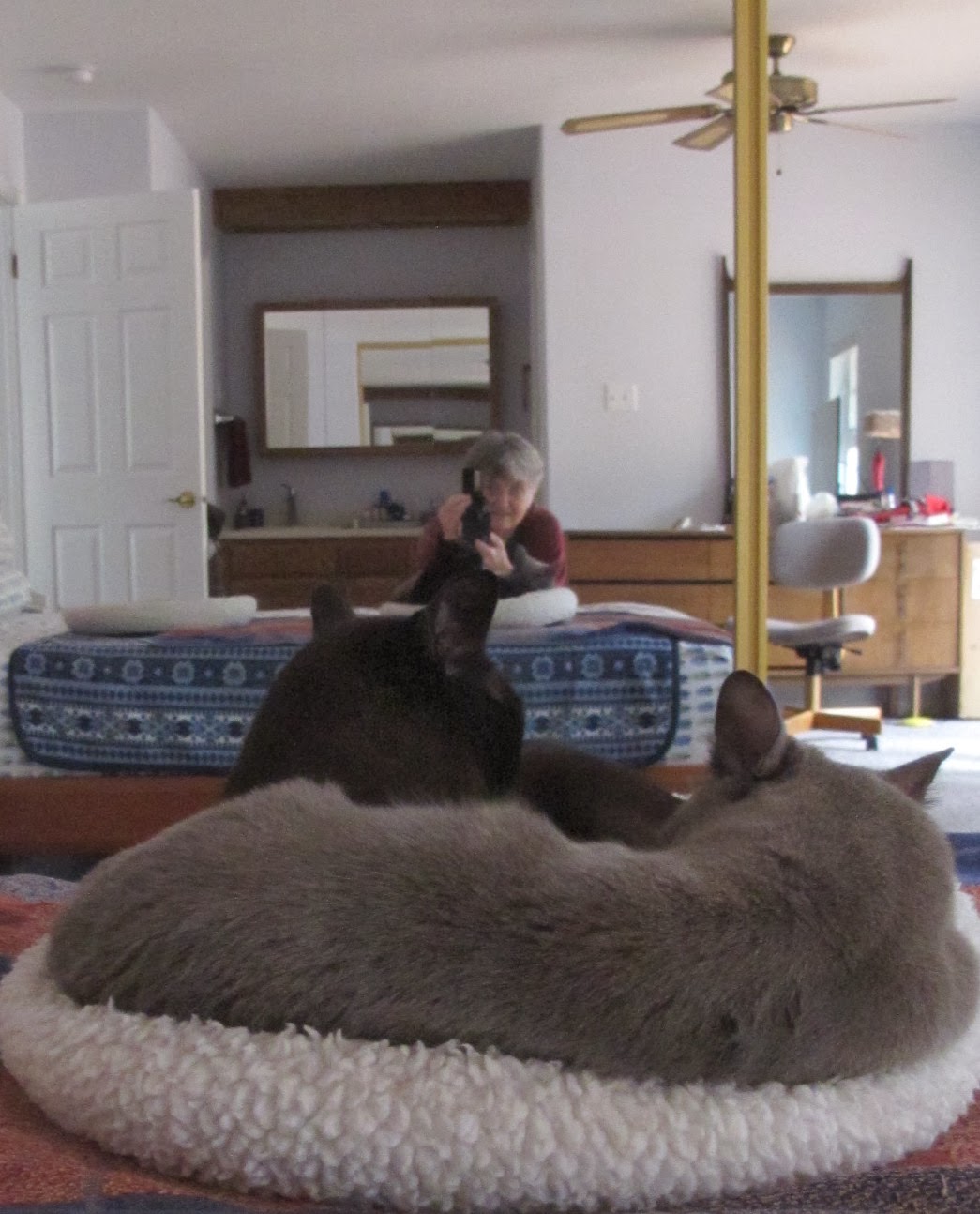 Deer are a little more animated. They walk and wait, catching a bite or two of deer brush as they saunter by . . . deer mode for waiting. 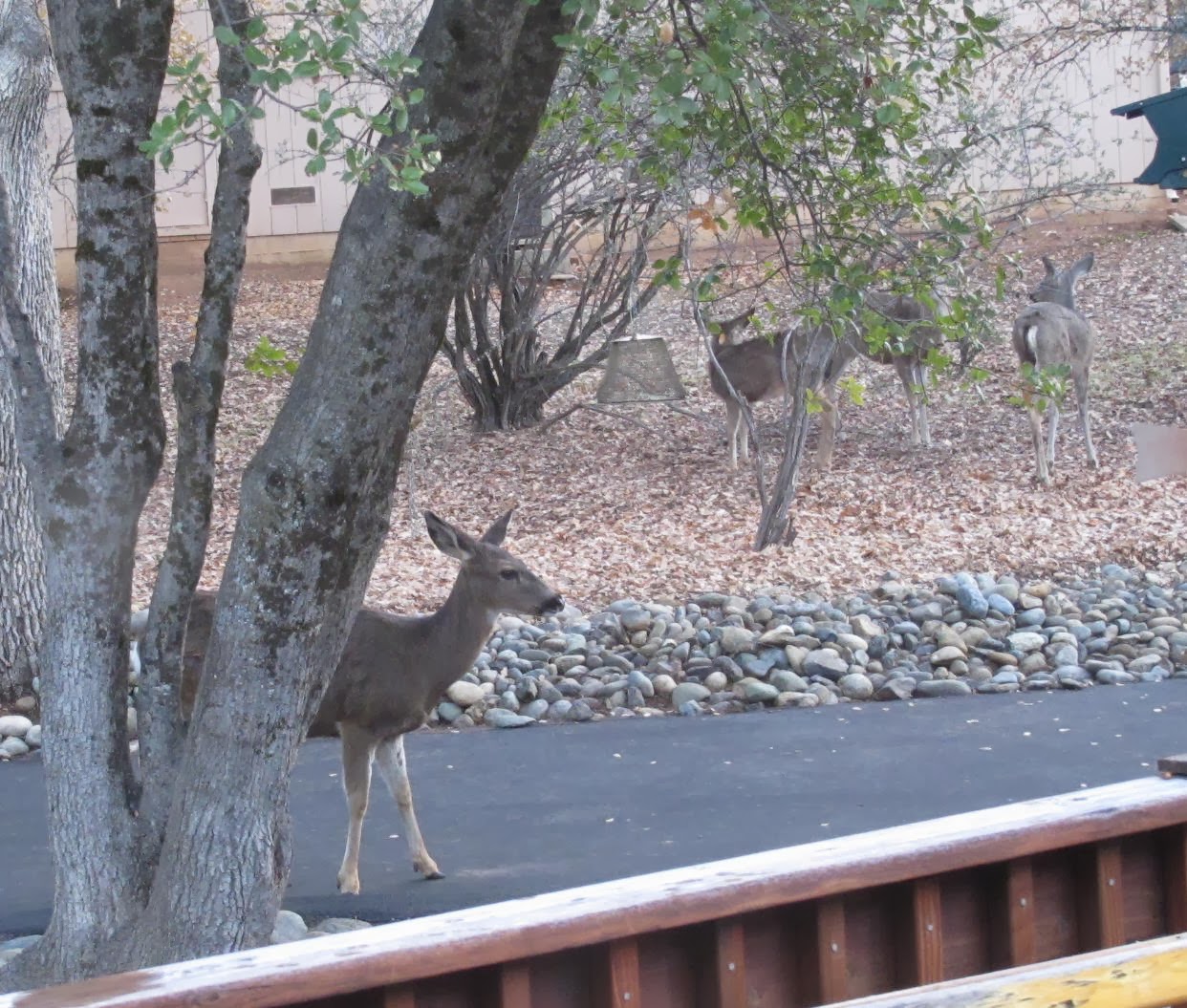 Three hours later, the kittens haven't traveled very far for their wait. Note in the lower right corner, a tiger cat is coming up the steps. They will notice . . . 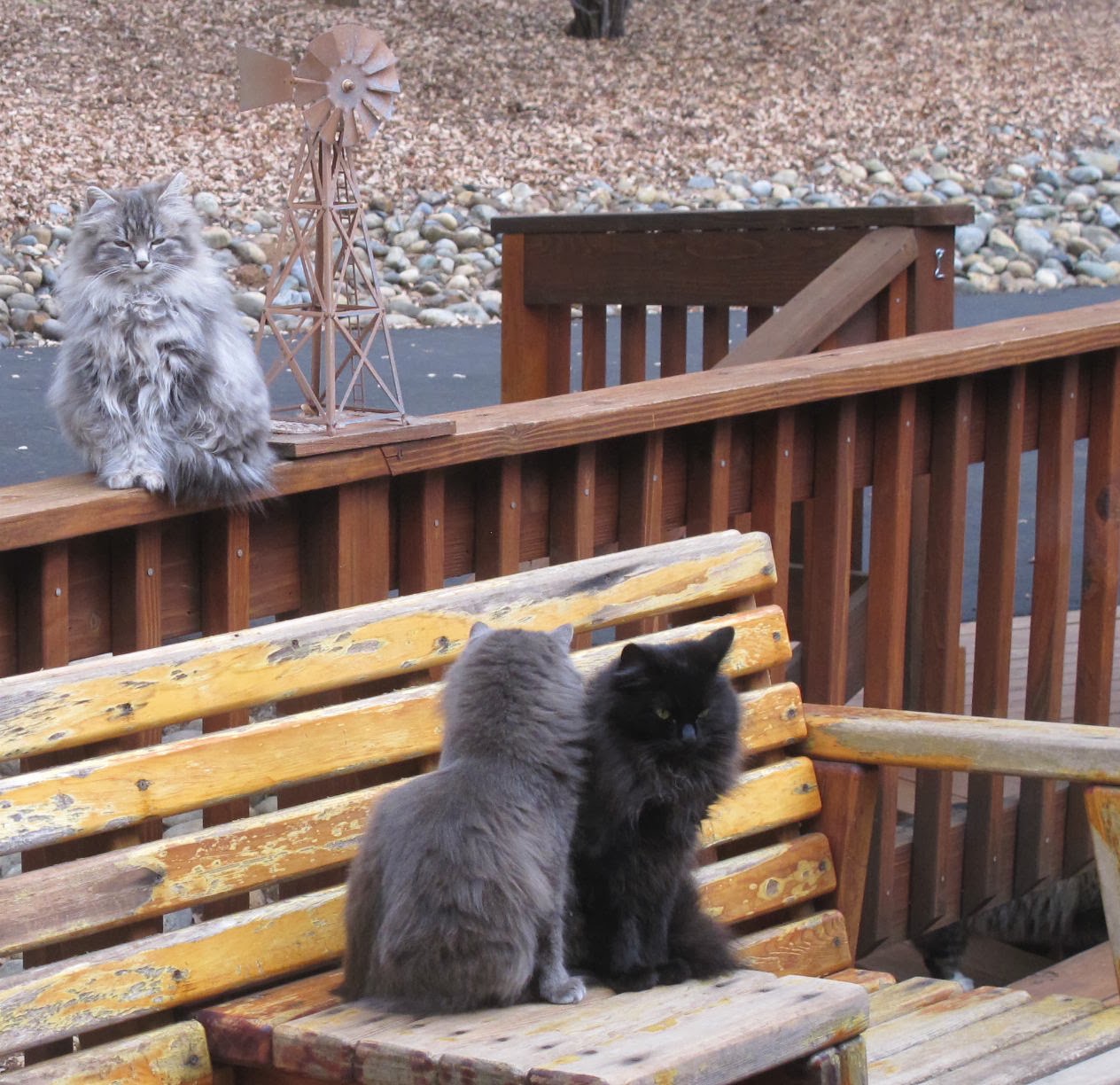 Heads swivel toward the newcomer, whom I can't spot from my angle in the house. 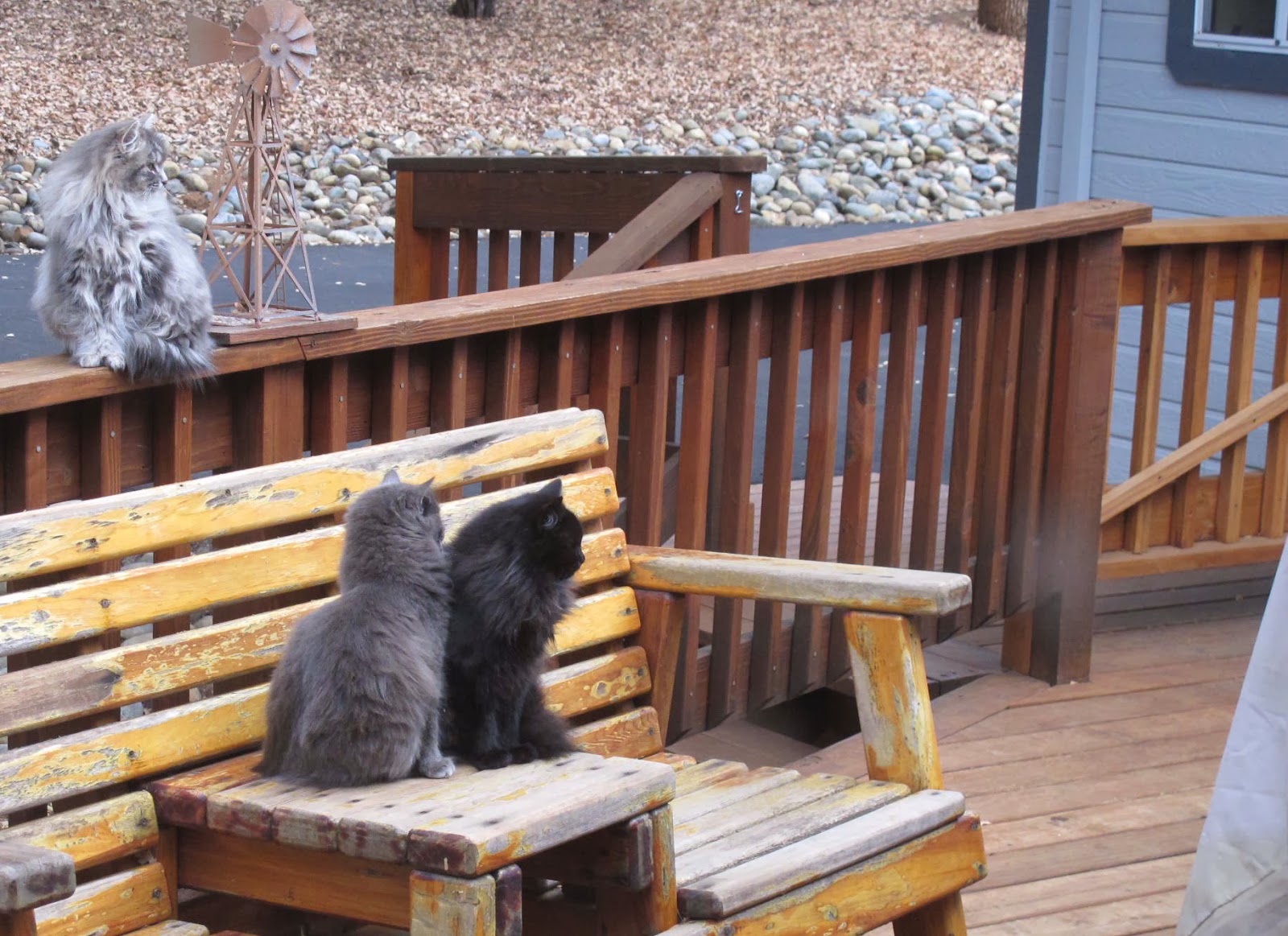 I had a request from Sister, traveling far from home, for cat pictures, so I'll continue with that theme. Henley is looking for something. This is when we arrived at the Man Cave at Sister and Brother-in-Law's where we stayed while carpeting and painting were being done in my house. 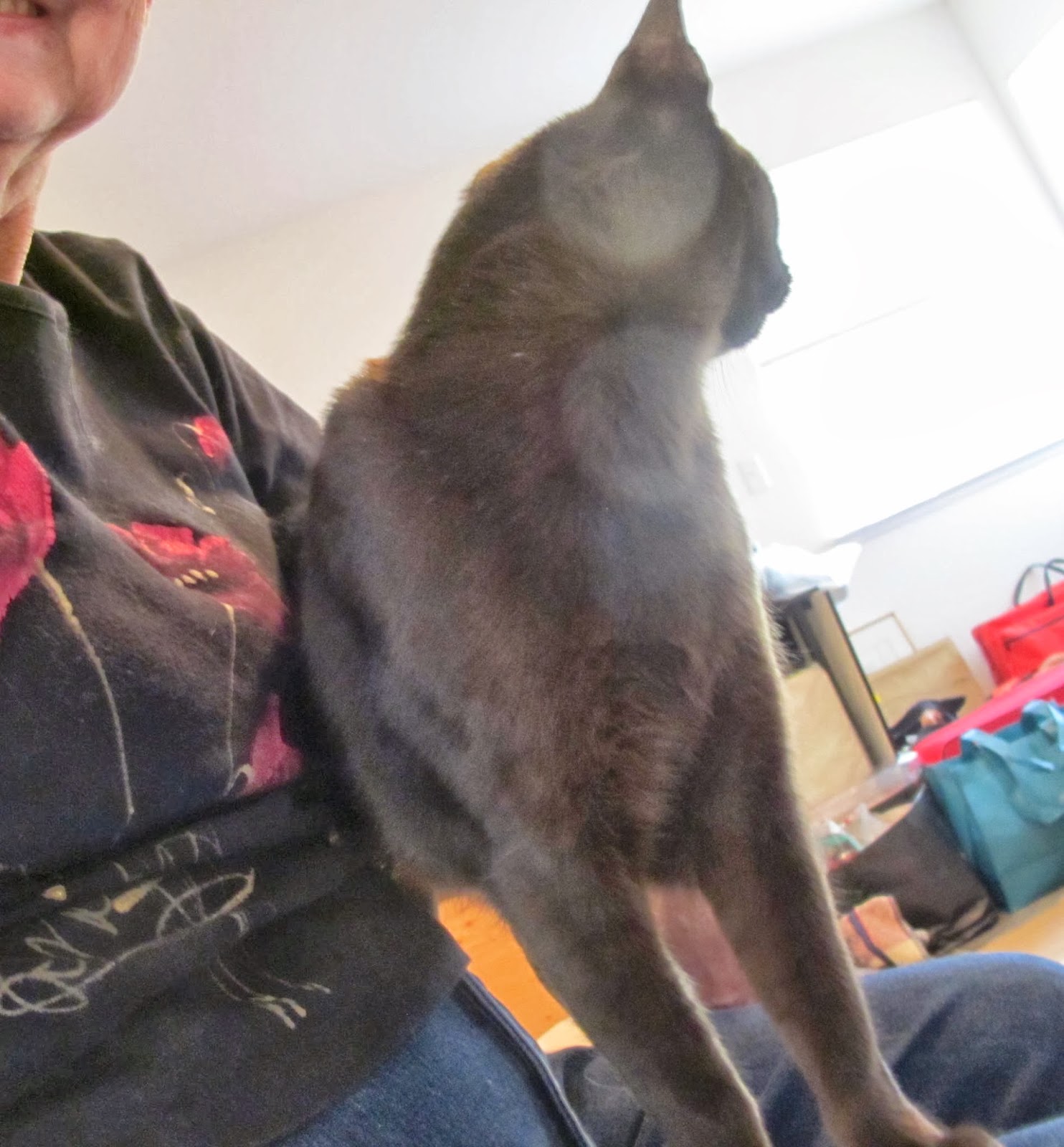 Jean-Luc generally looks surprised, or has a vacant stare. Hard to tell what's going on in that little brain. 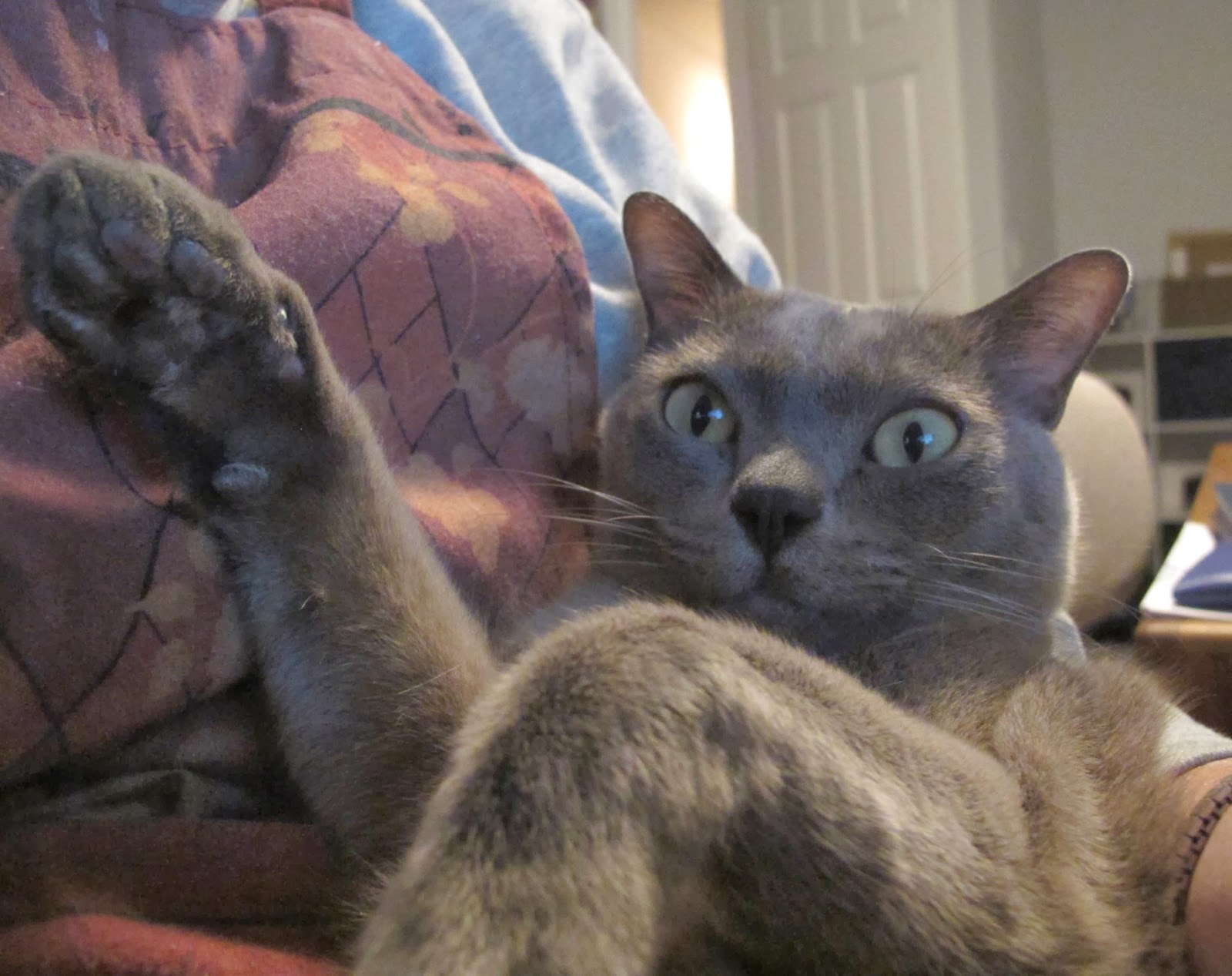 The kitten in the middle is the one that disappeared. It was turning into such a pretty cat. The black one I call Craig's kitten and the little stripey I call Nina's kitty. 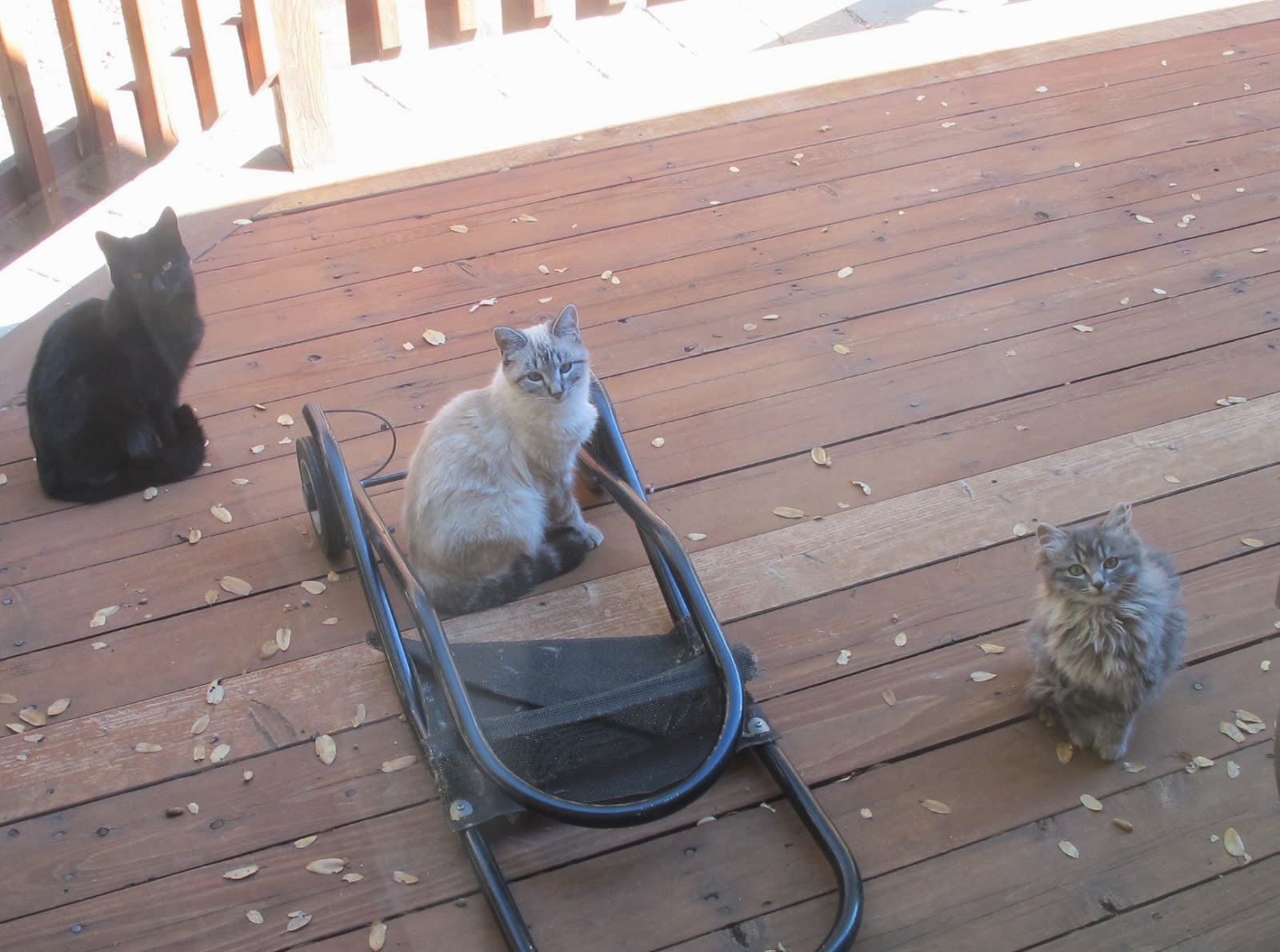 Fluffy black kitty appears to be waiting for a bird to trip and fall off the roof for its edification
. 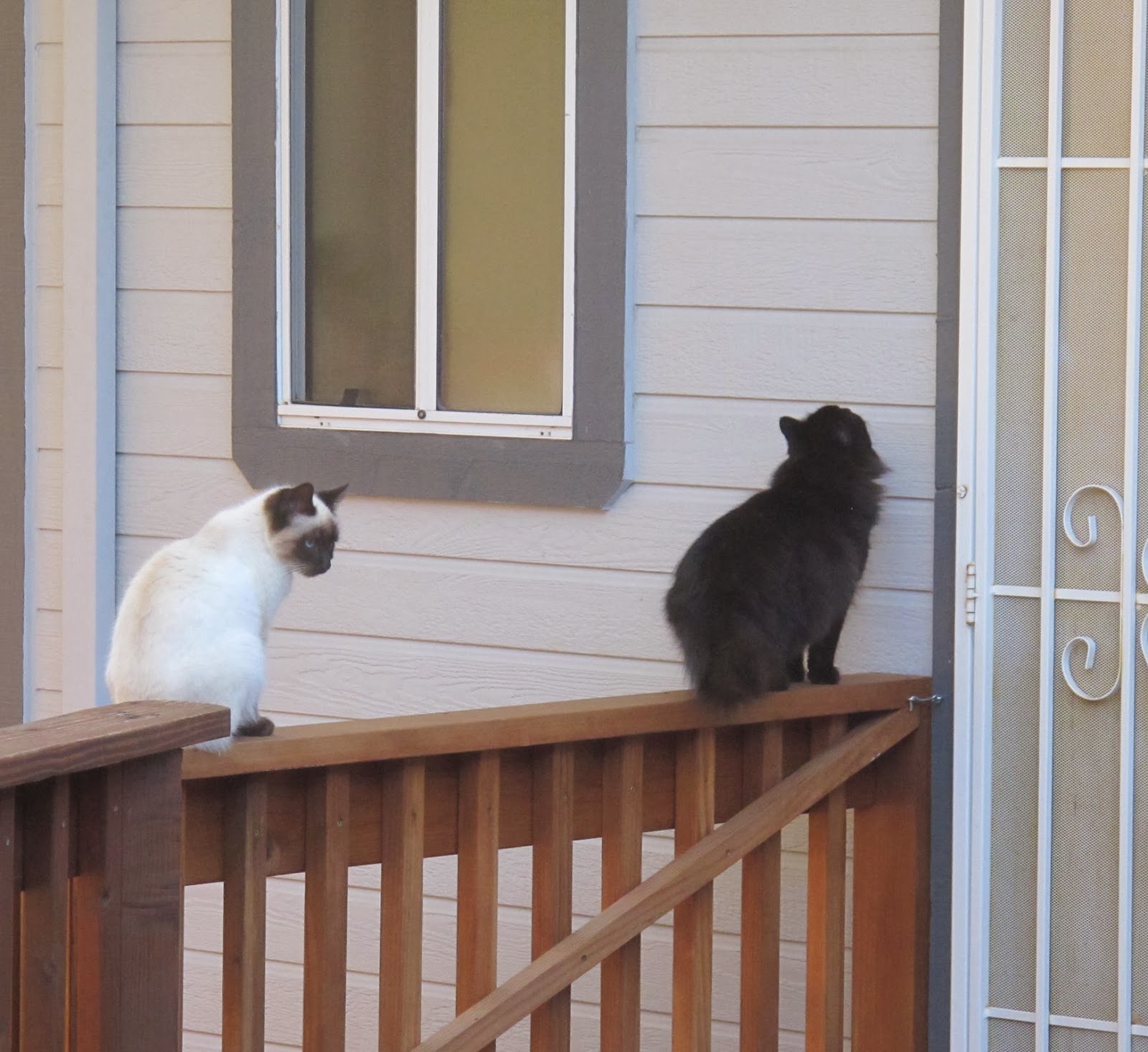 Henley at rest at home. 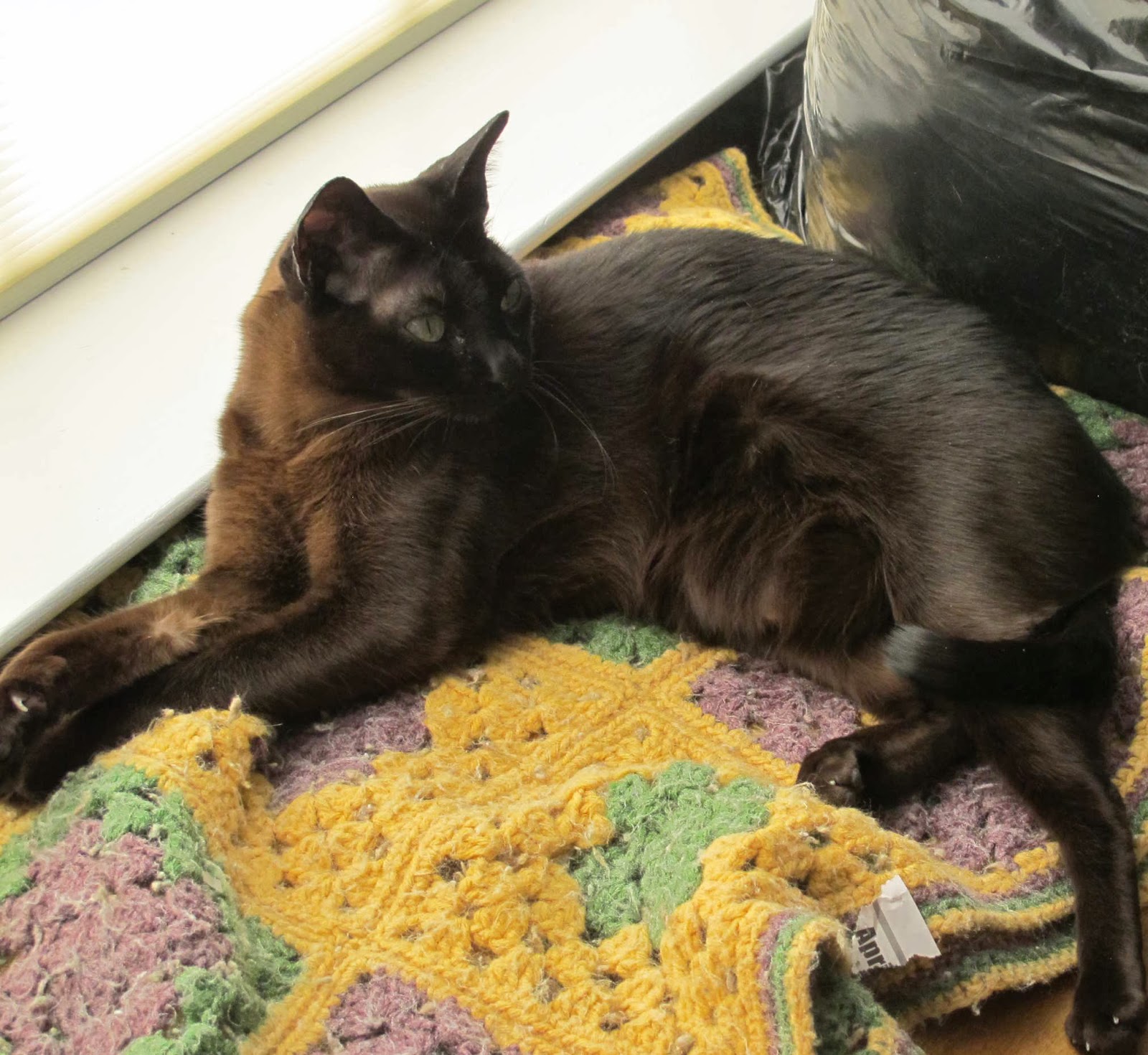 Jean-Luc feigning being at rest. He has found a matching background on the couch I got from Granddaughter. 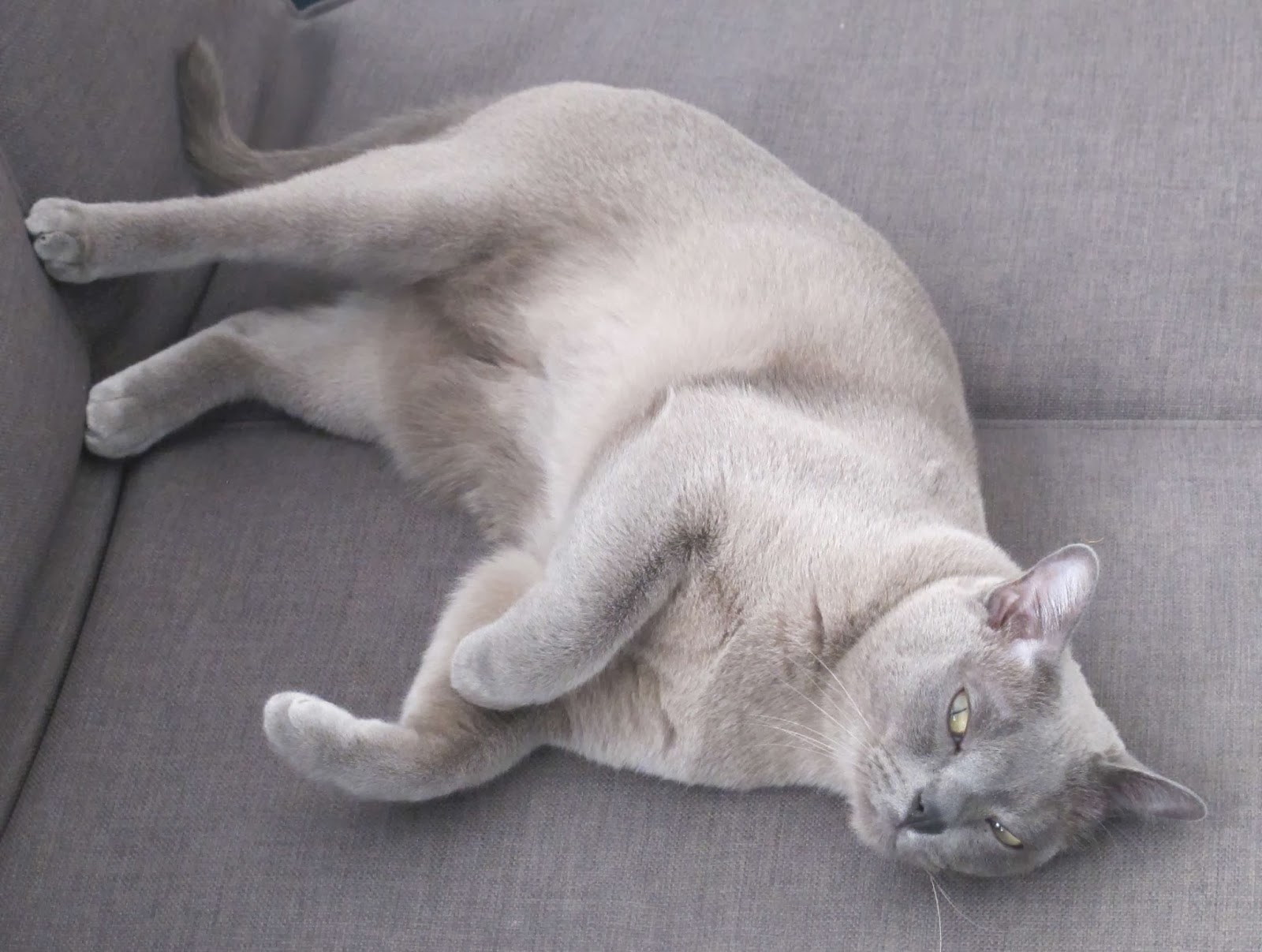 The outdoor kitties hang out in the collapsed wood-carrying cart. That stripey cat may be the mother of the Siamese. My theory is that fluffy black and fluffy gray are siblings from another mother. 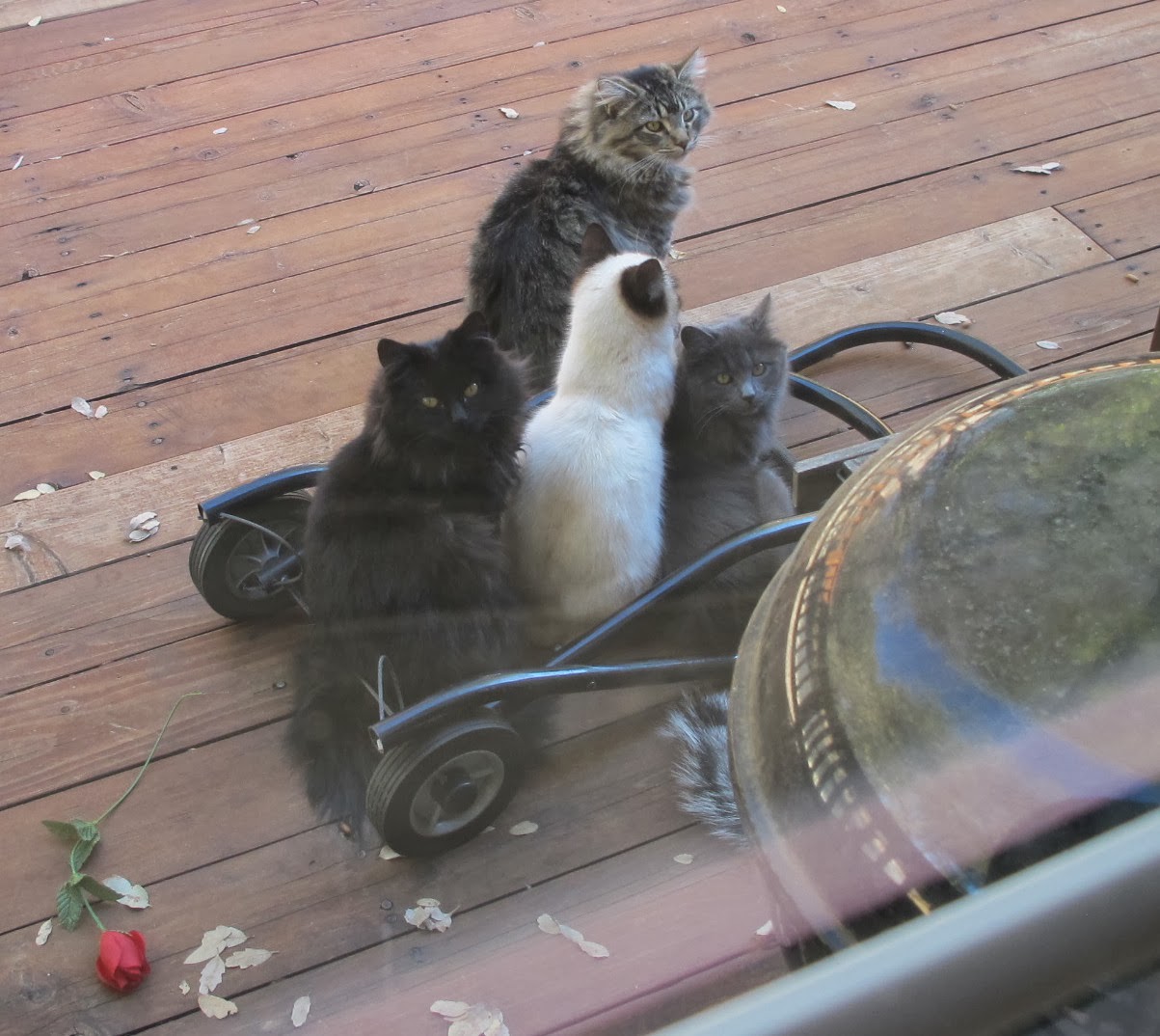 Again. They sure love cuddling in this thing. If I set it up, they knock it down, usually in the middle of the night, startling me awake. 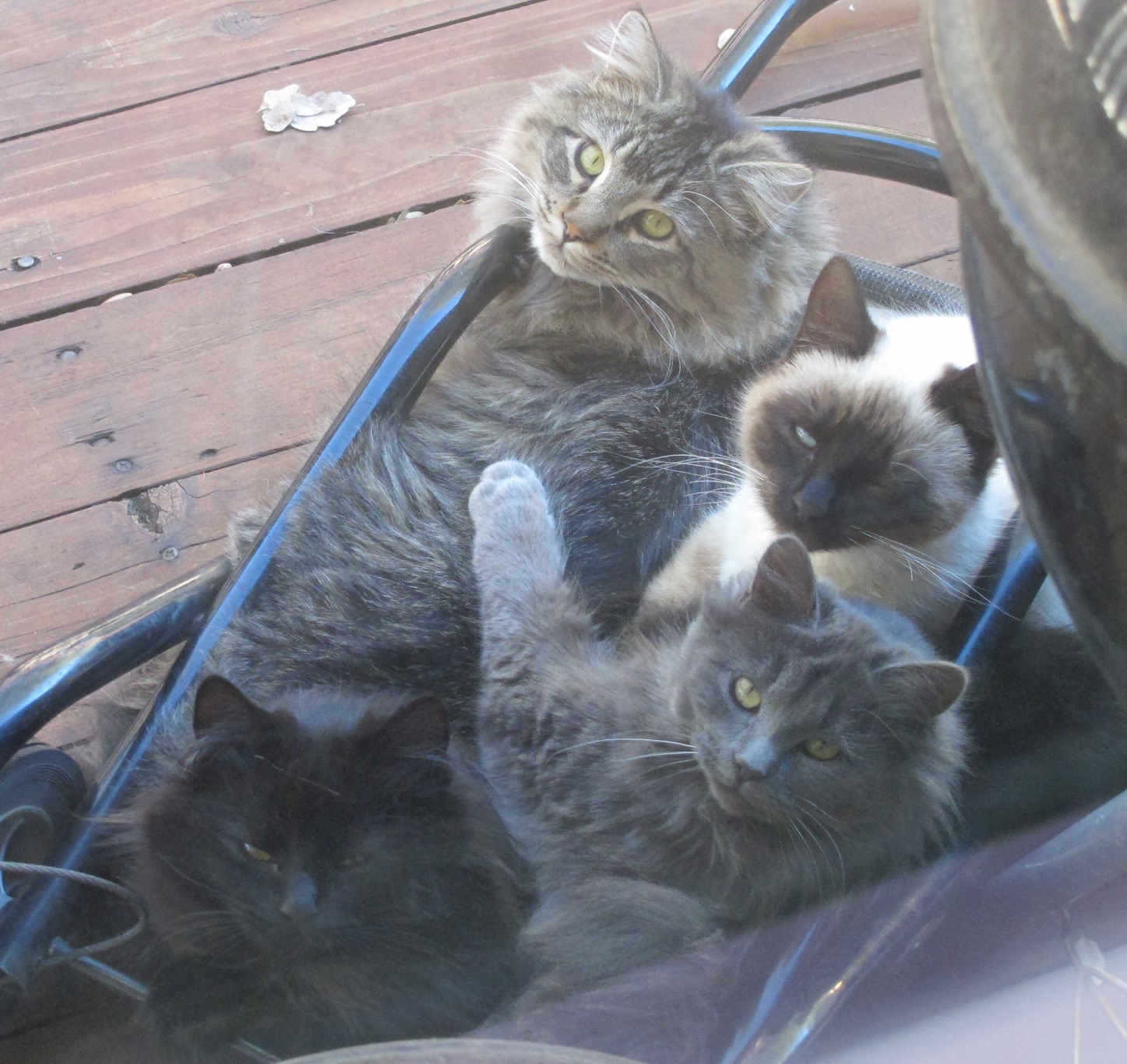 The day remained gray. I heard on the news that there were sprinkles in My Little Town today, but nothing measurable. Sometimes when I looked out the window, rain appeared to be falling, but it never wet the ground.

I don't think I saw a leaf stir. So much for the dangerous winds. We often don't receive the forecast winds. Makes me think we live in an area that's sheltered from those northeast winds.

We're all waiting for rain. (And you were forewarned about cats and kittens.)