Surely at some time I must have made earnest resolutions at the New Year. I can't even remember what they typically were over the years. That doesn't bode well for my having kept them. It's a lot like my twice-annual (more or less) strong resolve to exercise so I'll do better keeping up with the walkers on my trips to France. This past year, for example, I set my cell phone alarm to remind me daily to take a walk. I think I walked twice and after that, just turned the alarm off when it rang.

Last year -- well -- year before last now, I even started exercising to Jane Fonda tapes, the ones aimed at seniors. It lasted until some body part became so painful I couldn't continue.

I have also resolved to blog daily. Think of how much less wordy I might be if I didn't have to play catch up. I've sustained a few days in a row, and then failed.

As of New Year's Eve, nary a thought of a resolution crossed my mind. I was defiantly non-resolutionary. I was, or am, probably a little depressed. My aches and pains have aches and pains. I can't remember where I put anything. So many of the people in the obituaries were younger than I am. The state of the world could make me tear my hair out. Blech. No resolutions.

But sometime on New Year's Day, I had an inspiration. Well, maybe more like an infusion of interest that ran contrary to my moment of negativity, a damn-it, I'll-show-them-all. My "whatever" attitude about living for only as long as body and mind hold up blossomed into I want to live to be 100, despite my bad habits. I want to live with plastic cream in my coffee and fake sugar on my cereal and non organic eggs in my omelet; with flu shots and pesticides; with fluoride in my water and preservatives in my food; despite my mental allergy to exercise and my distaste for the list of "a" foods: avocado, artichoke, aubergine and to milk; despite my disinterest in cooking and good nutrition, and, in fact, in eating. I just don't want to be bothered worrying about peanut butter, except for its impact on the waistline. It would be living in a state of fear and suspicion of conspiracy. I've had my crusades in my life and some are still dear to me, but I'm not up to taking on these current ones. The kids and the grandkids can take up the torch for the causes of their generation. (It's weird to hear myself perhaps sounding like a conservative!)

I don't know where it came from, but somehow this came into my field of vision: 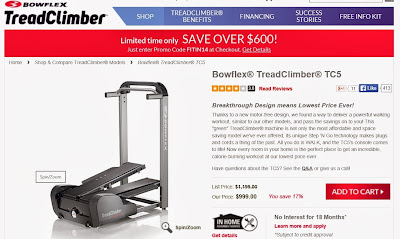 I look at it and wonder. Do I think I might possibly use one of these ? It's the smallest one they make and can somehow be rolled around. It combines the benefits of a treadmill, a stepper and an elliptical something or other. No electricity. It touts its greenness. It's so rigorous during the learning phase that you're pretty well exercised in five minutes. (One reviewer, an 84 year old man, found he learned to use it and love it.) Other virtues over walking: it isn't too hot out or too cold like it often is outside; you don't have to get dressed to do it. I thought at first that it isn't as hilly as my neighborhood, but perhaps it is.

I once had a Nordic Track ski thingamajig. It made black marks on the carpet. It was hard to get in and out of the closet, except that it tended to fall over. It followed me from San Diego to My Little Town in the mountains when we retired. It eventually moved to the thrift store.

I had Sister's recumbent exercise bike for awhile, but it was too big and heavy to keep in the house. We moved it to the front deck, where it also suffered the hot and cold problems, and was nowhere near a TV to watch through the boredom. It came back in the house when my deck  was being refinished and when I later tried using it, I could not cause it to pump. I gave it to the guy at the landfill for possible rehab.

Finally, the Jane Fonda tapes (do you still call DVDs "tapes" and recording a TV show on the DVR "taping" it?) has several exercises which involved lowering my head. I can't do that, so I was sitting out some of the moves.