No, it's Tuesday, not Wednesday


It had to happen some time. The couch is thrashed. Take a look. You can guess why.

My husband introduced the concept of declawing inside cats back with our first kitten together in 1979. This never happened to the furniture, and the cats were adept at defending themselves with the rabbit kick if push came to shove.

When I got Henley and Ferguson, my first Burmese, I had to pledge not to declaw them. Conceptually, I agree that declawing a cat is a pretty nasty thing to do, but then there's the couch. And the matching love seat. And the throw rugs. And the new carpet.  It really is nicer to live with a declawed cat.

Oh, I read the advice. Have a scratching post nearby and teach your cat to use it. Just to the left of the end of the couch there is a scratching post. On each side of the love seat, there are scratching apparatuses (apparati?), too. And in most of the other rooms. They use the scratching posts, but that doesn't lessen their glee at scratching furniture. It's Henley's joy in life to lie on his back and shred the couch, giving me his most impish innocent grin. They shred the back, too. They are oblivious to instruction. 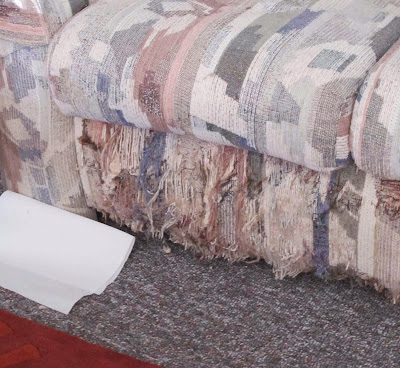 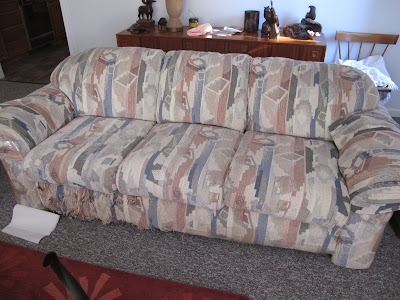 Ever since Christmas, there has been one sale after another online. I've been looking at couches. I've been looking for leather or microfiber, hoping they're less tempting to cat claws than the loose textured weave. I finally focused in on one and ordered it. It's being delivered by a freight company that introduced itself to me by email and promised to communicate with me to set up an appointment and send two guys to do "threshold delivery." That means they don't just drop it off the truck in front of the door. They will deliver inside a threshold. I'm hoping "threshold" extends into the living room to the same exact spot where the old couch stood so I can assemble the new one on location.

When I got an email that the couch was in the possession of the freight company, I called my gardening service to send some muscle to put the old couch in the back of my truck so I could take it to the dump transfer station. I confirmed with her yesterday to send them today. I almost didn't answer the call with the out-of-town caller ID last evening; I'm tired of fending off solicitations. Fortunately I did, because it was a freight guy, setting up an appointment for Thursday delivery. There goes my day at NeedleCrafts, and maybe even French lessons if they come at the late end of the delivery window.

I measured my truck this morning and I think I would not have been able to close the tailgate. Probably not a problem if it were a flat trip to the dump, but it involves a long climb up a steep winding road and I had visions of any rope I might secure it with stretching, and I'd find myself stuck, blocking the road with a couch I can't lift.

It wouldn't fit through the back door. (How did it get in the house in the first place? I can't remember.) About the only alternative is through the front door. At this point, I decided to take them up on an offer to take the couch to the dump transfer station in their truck. They've got better tie-downs than a stretchy rope, and the ability to pick it back up if it slides out on the road.

The front door is wider but the course is more difficult: one step down out the door and onto a small porch; turn left, down two steps onto the deck; turn 180 degrees to the right and down a stairway to the front driveway. Left to my own devices I would have stood it on end and cartwheeled it down the stairs, but the guys looked askance at the suggestion. (Not everyone catches my deadpan humor.) I demonstrated with the couch cushions. They went down beautifully, but I suppose their symmetry kept them on a course the couch might not have done.

Coincidentally, last night I was wondering why the cats didn't have any toys around to play with. I'm always buying them. When the couch was removed, I found of the answer. There are no doubt other toys under the stove. 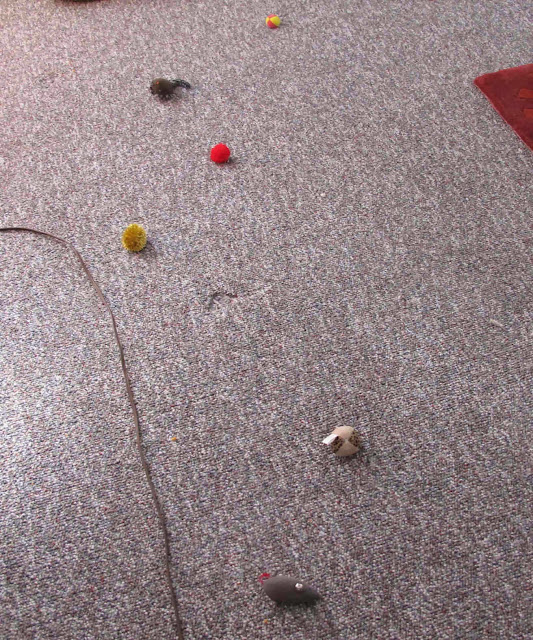 Once I let the cats out of the bedroom, they immediately found the missing toys.  Jean-Luc took possession of the toy that most realistically looked like a little animal. 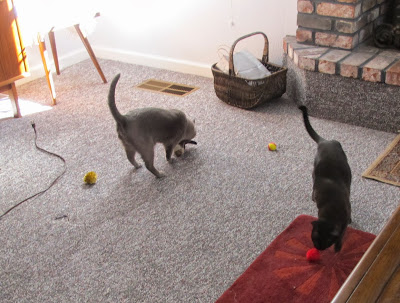 He distances himself with his prey from the other cats. 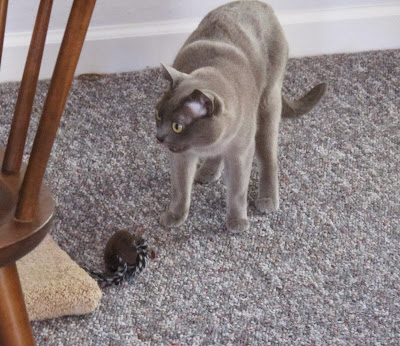 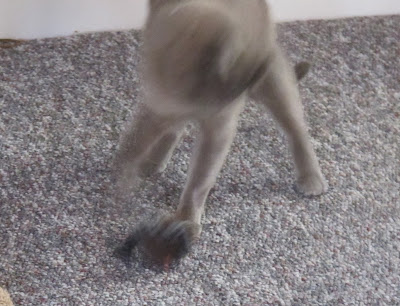 He bites it first, then puts it in a food bowl. He does this with other things: stuffed animals, knotted grocery bags, the lumbar cushion on my recliner . . . chews on them, feeds them, then eventually eats them. I have to take them away from him before he's able to ingest them. Toy animal stuffing is not good for the digestive track of a cat. 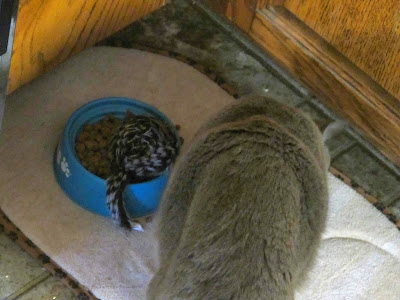 You can still see the predator in my hot house flower. 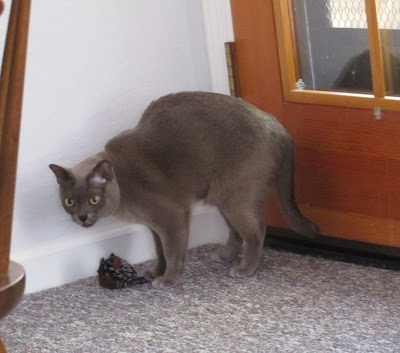 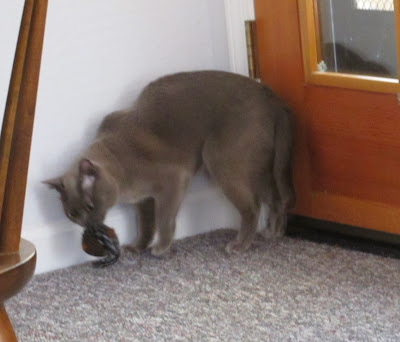 Chloe has been a cranky cat since Jean-Luc joined the family. She'd been friends with Henley and Ferguson, and a pal of Henley's after Ferguson died. But she has always hissed at Jean-Luc. He, on his part, took to laying in wait and attacking her. For most of this time, she has run from him, taking refuge up on a chair or under a table. Lately, she has been standing her ground, hissing and batting at him. Yesterday, to my amazement, I caught her and Henley frolicking and playing together. I'm always a little too late in picking up the camera to catch the action. Henley has galloped into the kitten room, but Chloe, knowing she's on camera, doesn't pursue. Her last blood test came out very well. She is clearly feeling perkier. 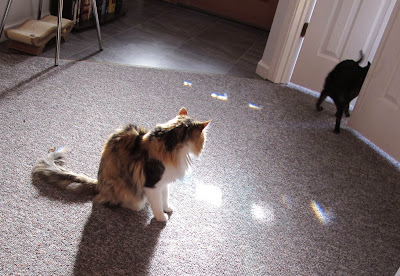 She's a pretty girl. She'll be 15 in April. We almost lost her before her thyroid condition was diagnosed a few years ago. 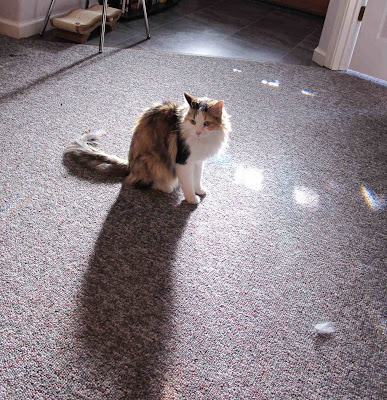 I told the guys who took the couch that they're arrival was very timely, as the new couch is scheduled to arrive tomorrow. Then I called the Little House to cancel my lunch reservation. A live person answered and I told her I couldn't stay for lunch at NeedleCrafts tomorrow because of a delivery.

"Tomorrow's not Thursday," she said. "It's Wednesday."  That brought me up short. I thought today was Wednesday, and probably would have trotted down to the Little House tomorrow to open up for the gals and do a quick hello before going home. Only they wouldn't have been there. If tomorrow is Wednesday, this must be Tuesday. (Does that remind you of a 1969 movie?)