I walked into the living room this morning and faced this. The far one needs flipping before I can even take on the assembly, and it weighs in at 150 pounds. I suppose I'll have to wait until Monday to get assistance and then proceed with "some assembly required." In addition, I still have two shelving units waiting in the basement to be assembled.

But I'm getting ahead of myself here. It's now the end of the week, so I'll go back to the beginning of it. 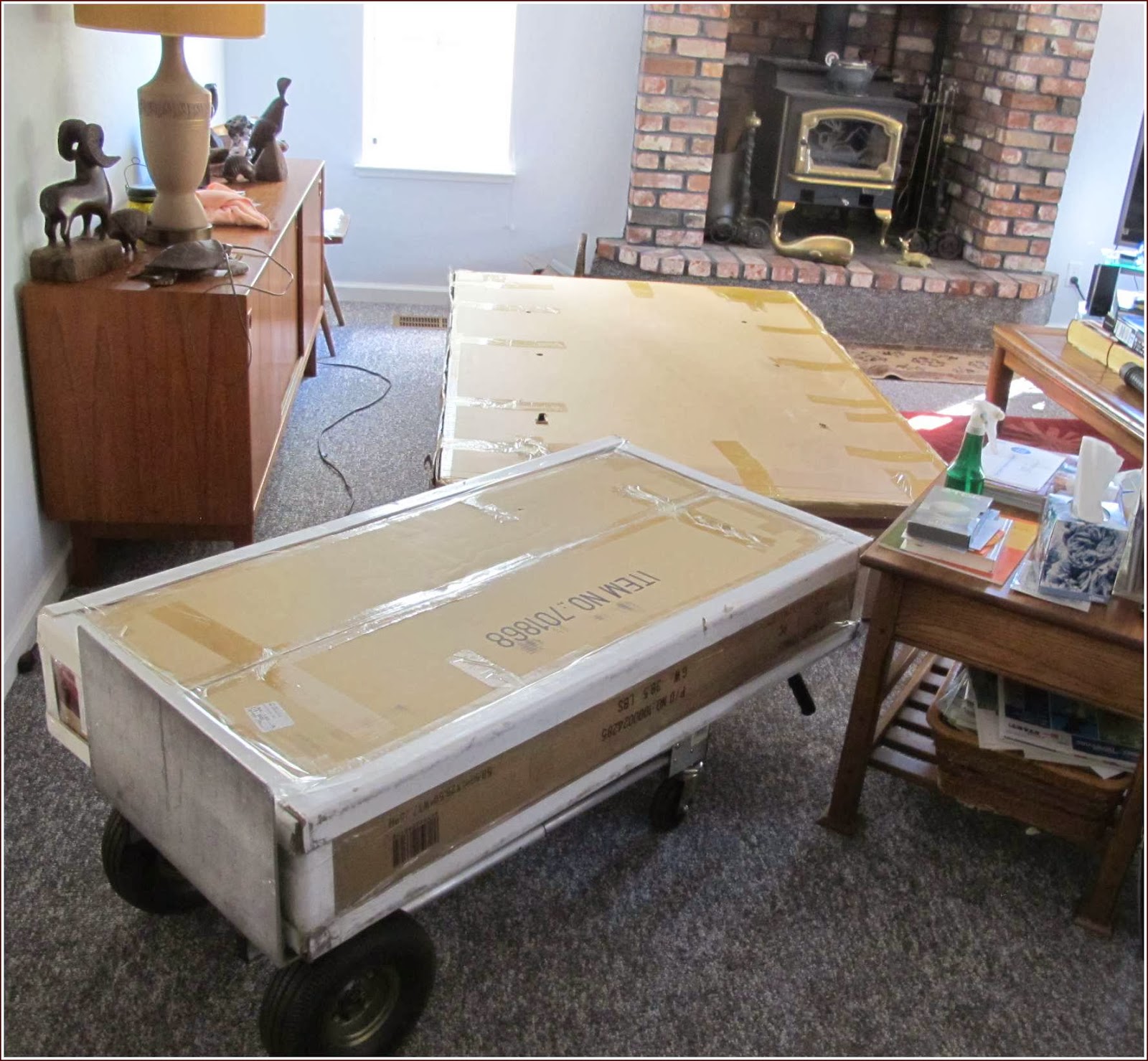 For the first time in forever, I managed to make an airline reservation that didn't turn into an adventure tale of its own. Except for a balky airline website (forever to load, forgetting my entries), my end of the transaction went well. Let's just say I remembered NOT to reserve on a weekend when there is no one to answer the phone at the airline if anything about the transaction goes amok.

Some projects don't lend themselves to a great sense of progress; opening and processing the mail, for example. It arrives so much faster than I can deal with it, so it piles up. I had fantasies of sorting it on the dining room table and being done with it. That's a dangerous tactic if I don't manage to finish it up in one day. I did get to paying bills, and one more concrete project: lining the drawers in the zinc dressers.

Yes, they're supposed to look mottled, like a zinc bar. It's real zinc. I didn't know about zinc's boho cachet in Parisian bars, which you can find if you Google "zinc bar." Daughter and Granddaughter thought it most appropriate that this Paris-lover should be the one to purchase these from Granddaughter when she downsized her living quarters. Sooo, I need to decorate in some way that goes with . . . 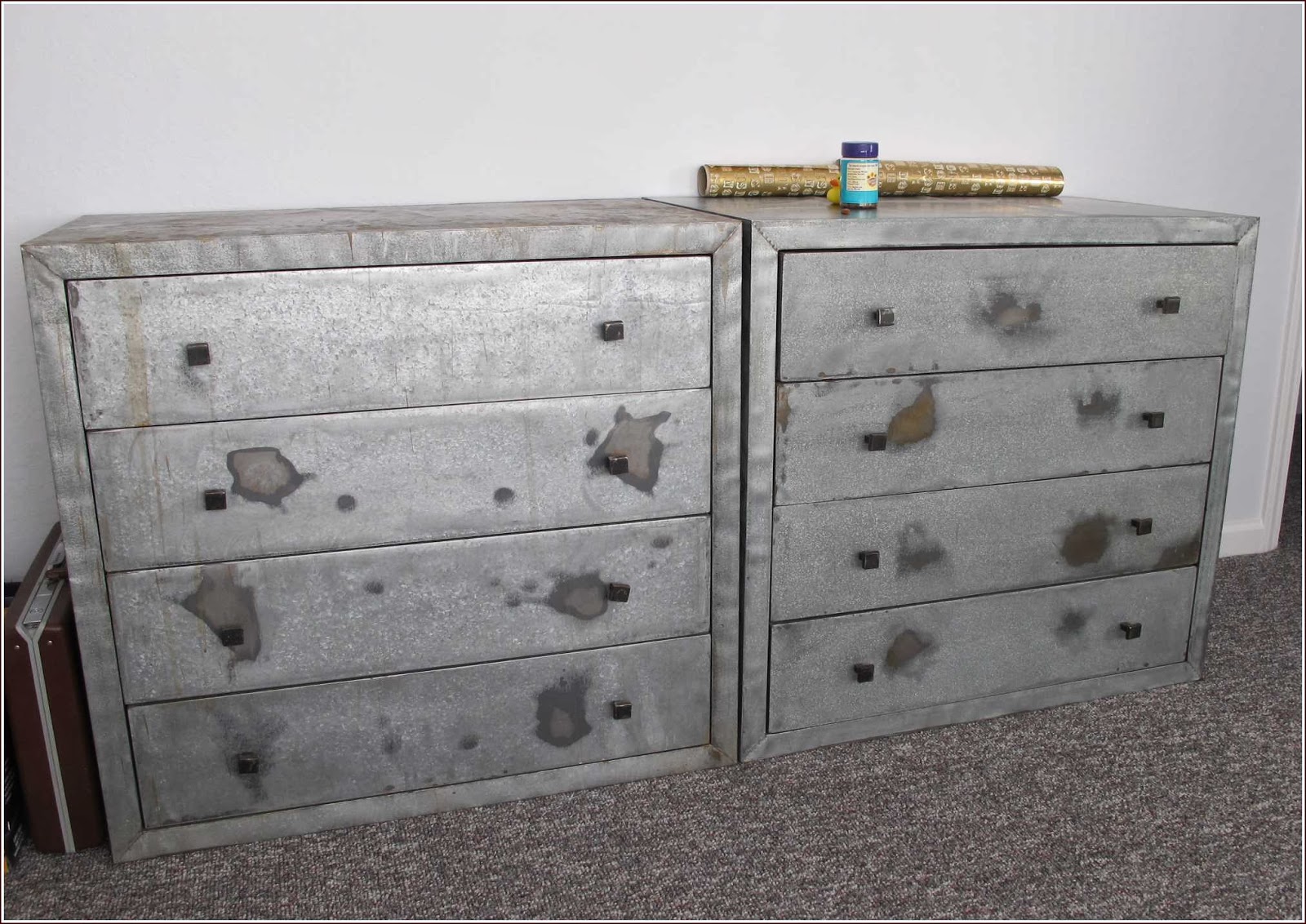 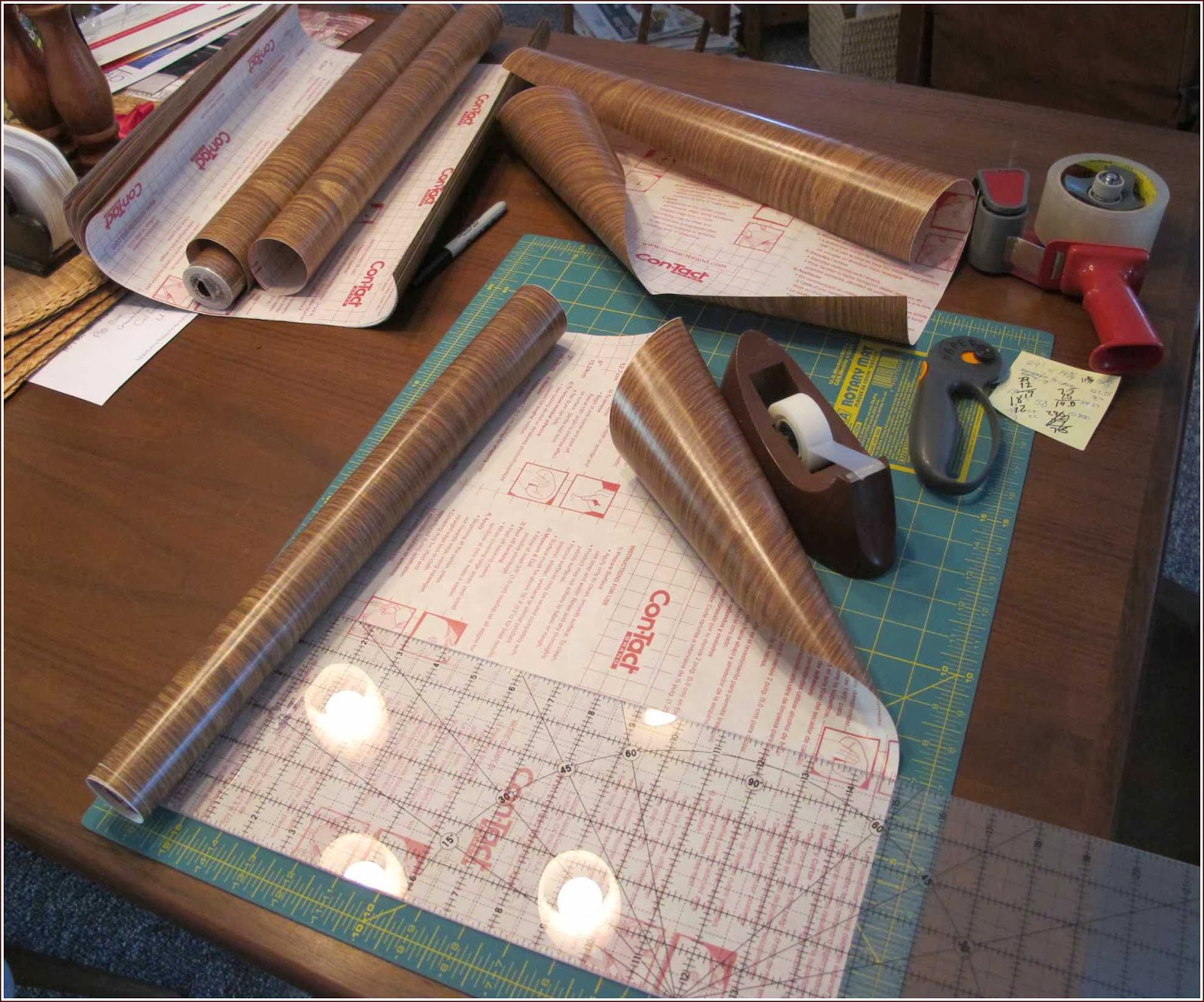 I don't know how old these are and what has been kept in them in their lifetime, so I like this smooth interior. And I got the liner on sale, which is what largely dictated the color and design! 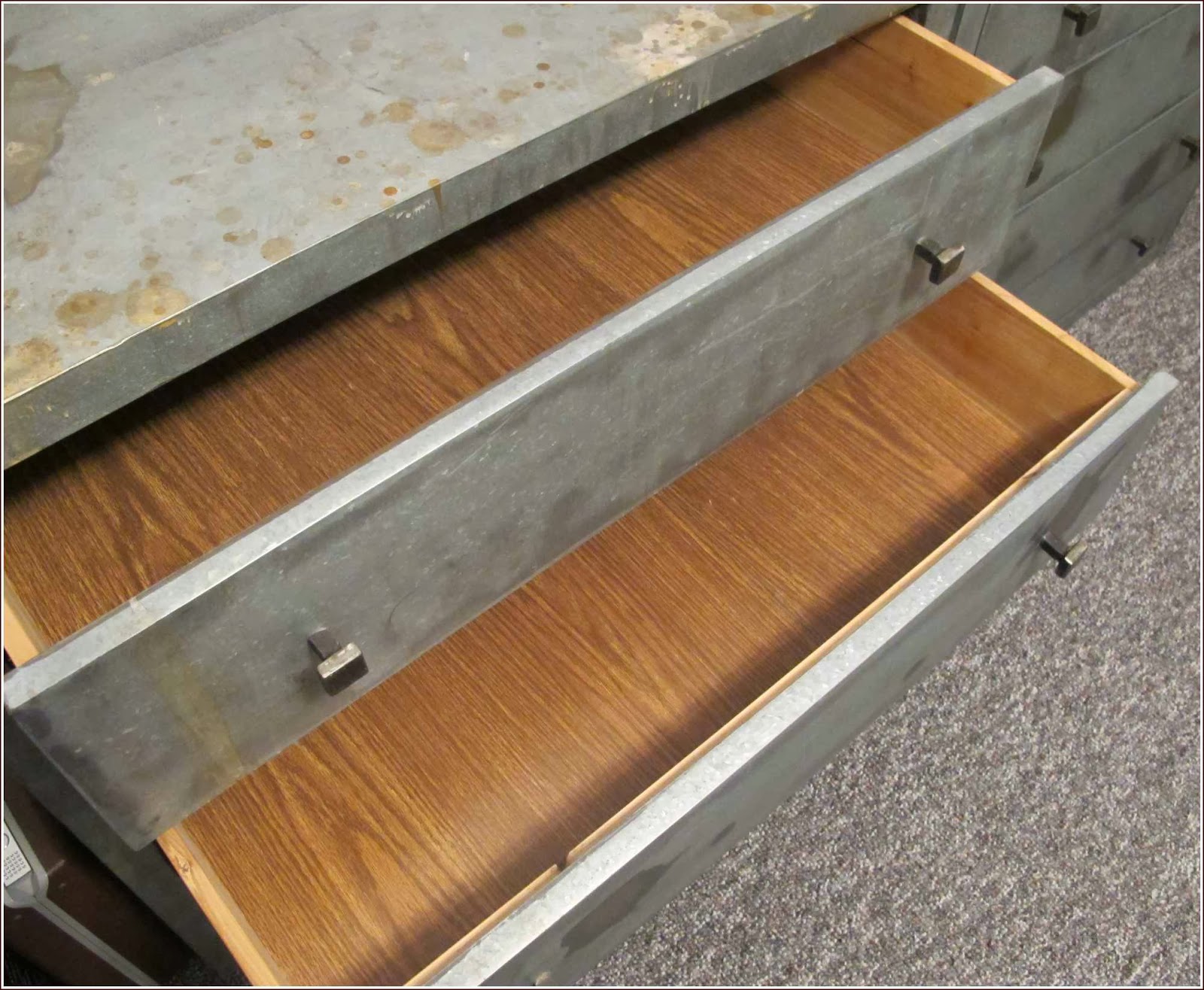 Early in the week I heard from the delivery company that my couch, AKA the Ravenna Pillow-Top Euro Lounger (convertible into five distinguishable configurations), was in their possession and they would be contacting me with a delivery time. This follow-up contact turned out to be more like an FYI that the delivery would be between noon and four on Thursday.

Thursdays out?  They couldn't come on some day besides Thursday? That wouldn't give me time to eat the noon lunch at NeedleCrafts should they arrive at the early end, and it would push the time too close for a trip to the Little City down the Hill for French class if they arrived at the late end of the interval. I cancelled my lunch reservation at The Little House.

The muscle guys from my landscape maintenance service had hauled away the ratty couch on Tuesday, so a space was ready for the new thing. When the two guys arrived to do the "Threshold delivery" I led them and the box through the house to this spot, hoping they wouldn't object to the distance from the threshold. They stood it on edge at first and it rocked gently. I could envision mashed cat.

Did I mention it weighs 150 pounds and that my luggage-tested lifting capacity is 37 pounds, and that's with a handle and a side grip? A discussion ensued. Assembly was described as pulling the legs out of a zippered pocket and screwing them in, making it seem most logical to lay it down on its top. Cool. Off they went in plenty of time for me to go to French class. 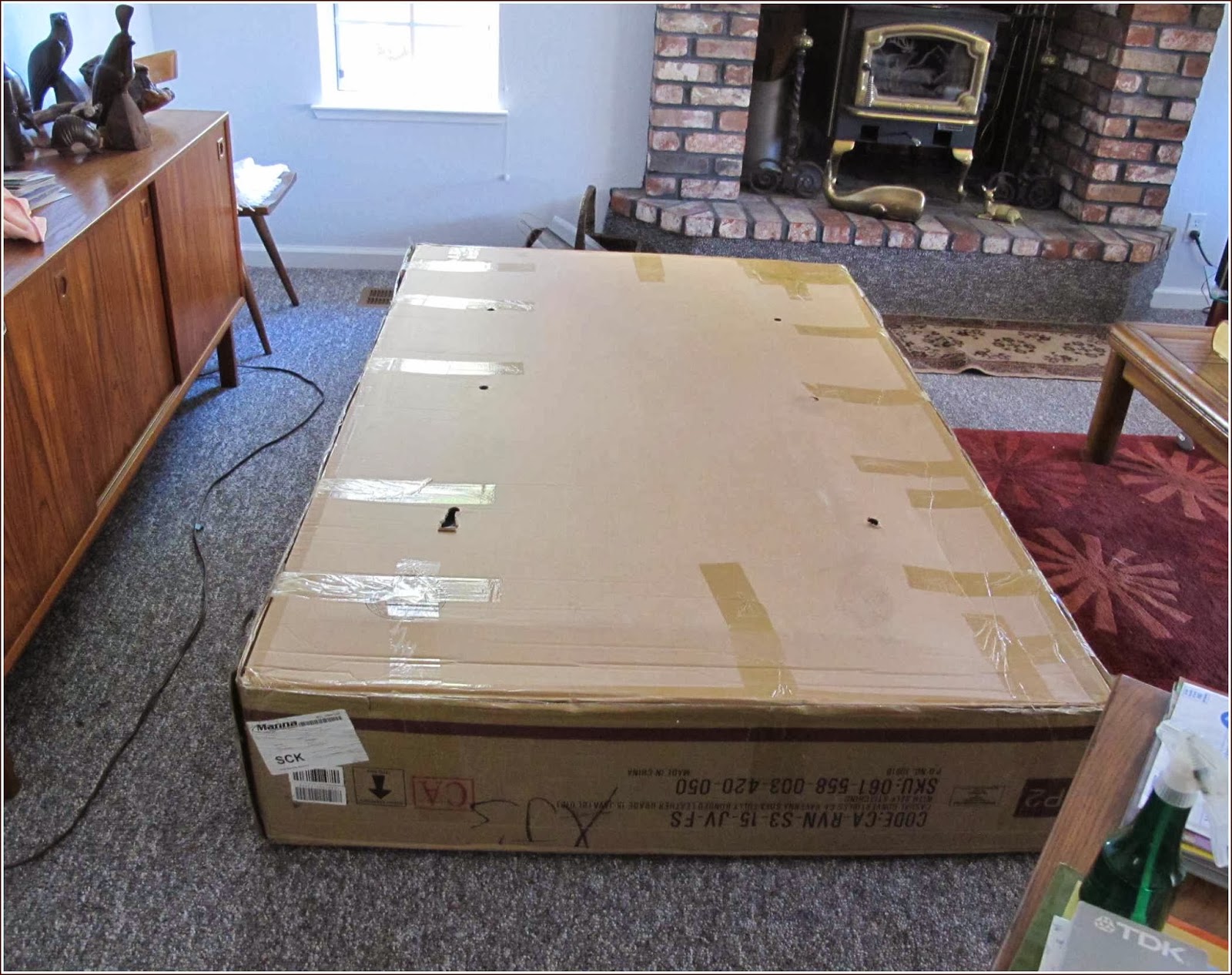 Henley and Jean-Luc watch from the comfort of the other room (obligatory cat picture). 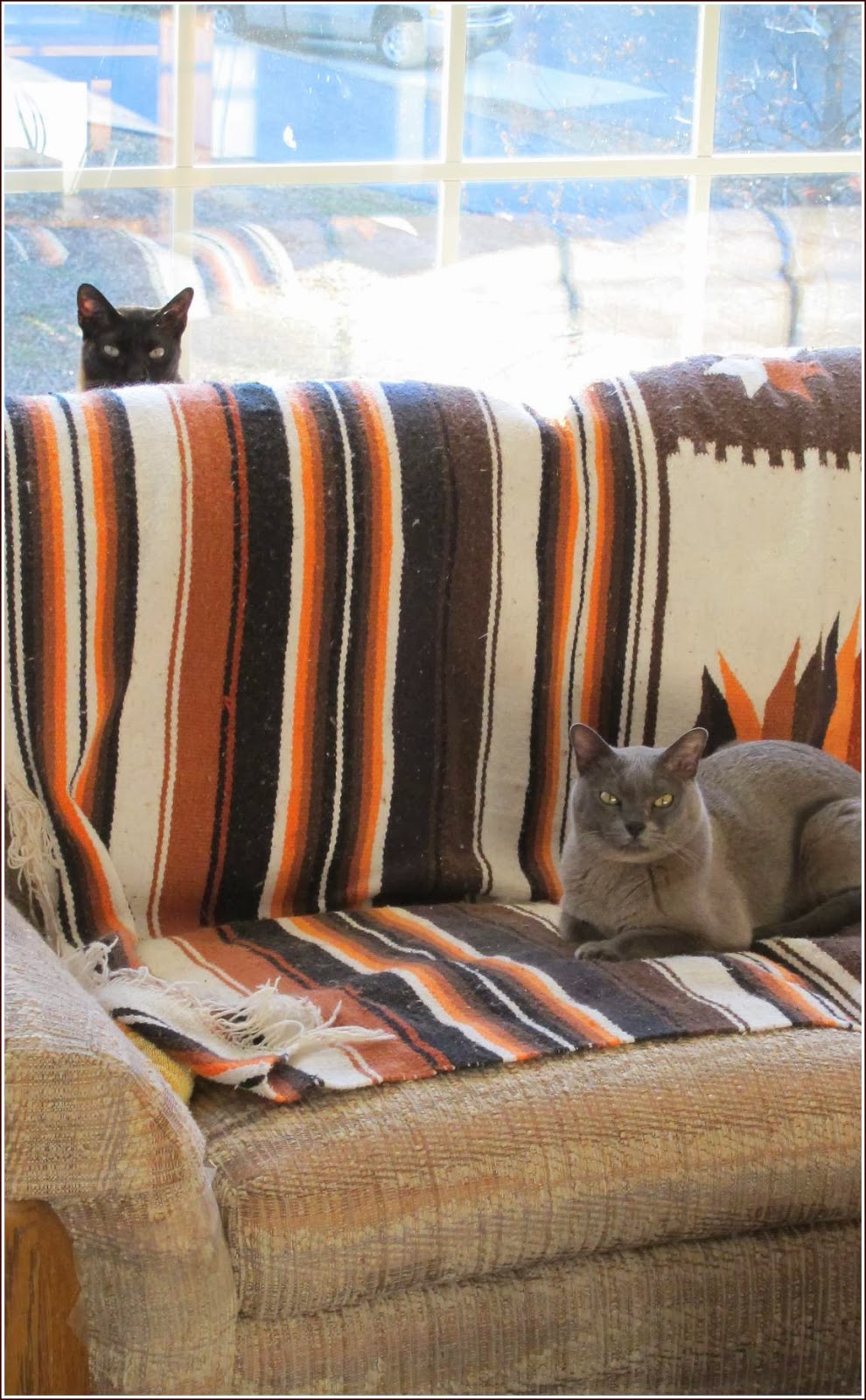 A buck and couple of does were in my driveway when I went out to the car.  Only these two were in view by the time I pulled my camera out. 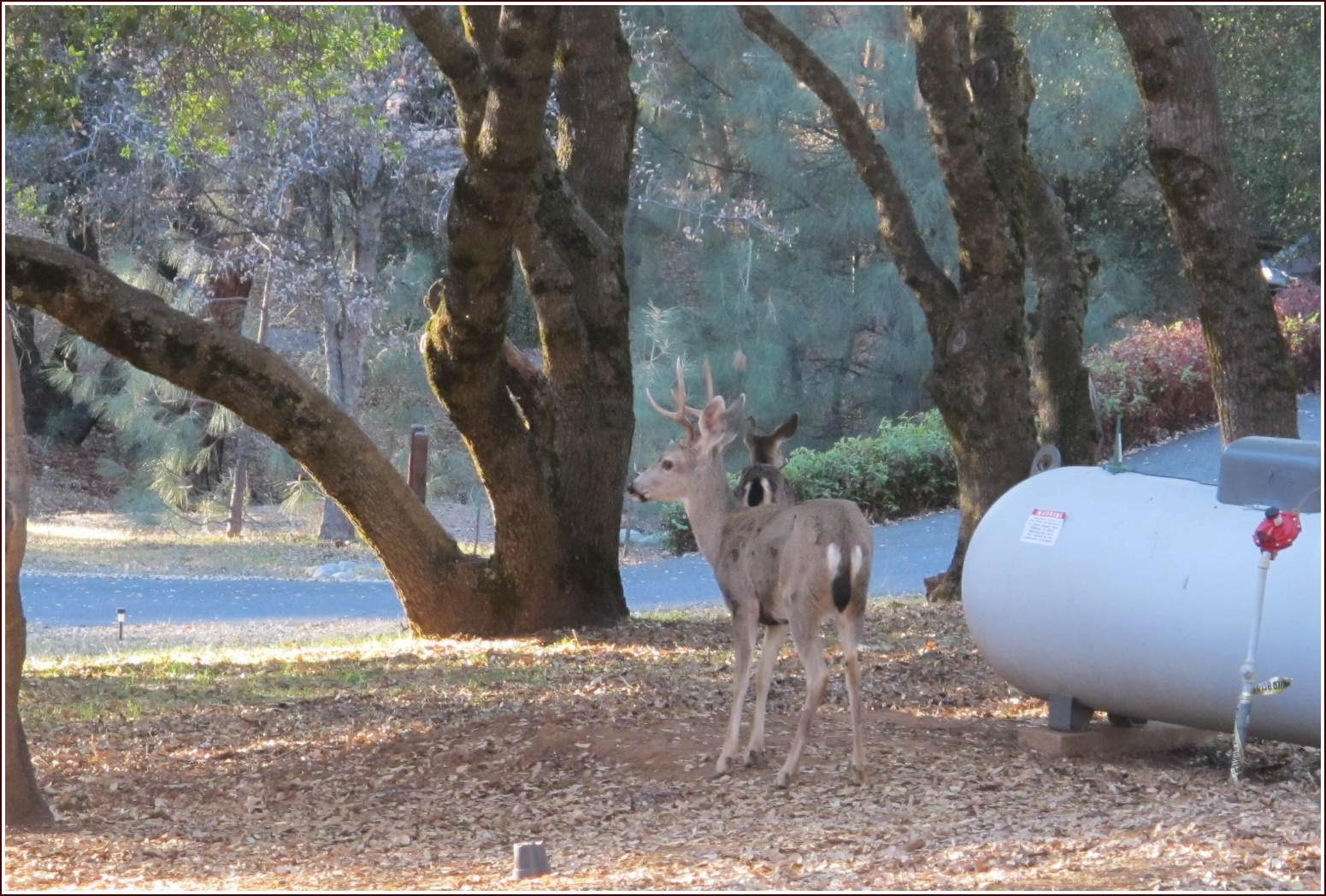 Although I could see the full moon out during my drive home, it was just coming over the hill behind my house as I pulled into the driveway. I've yet to get a good moon shot, but this was grabbed in an instant and not properly planned. Which is what usually happens. 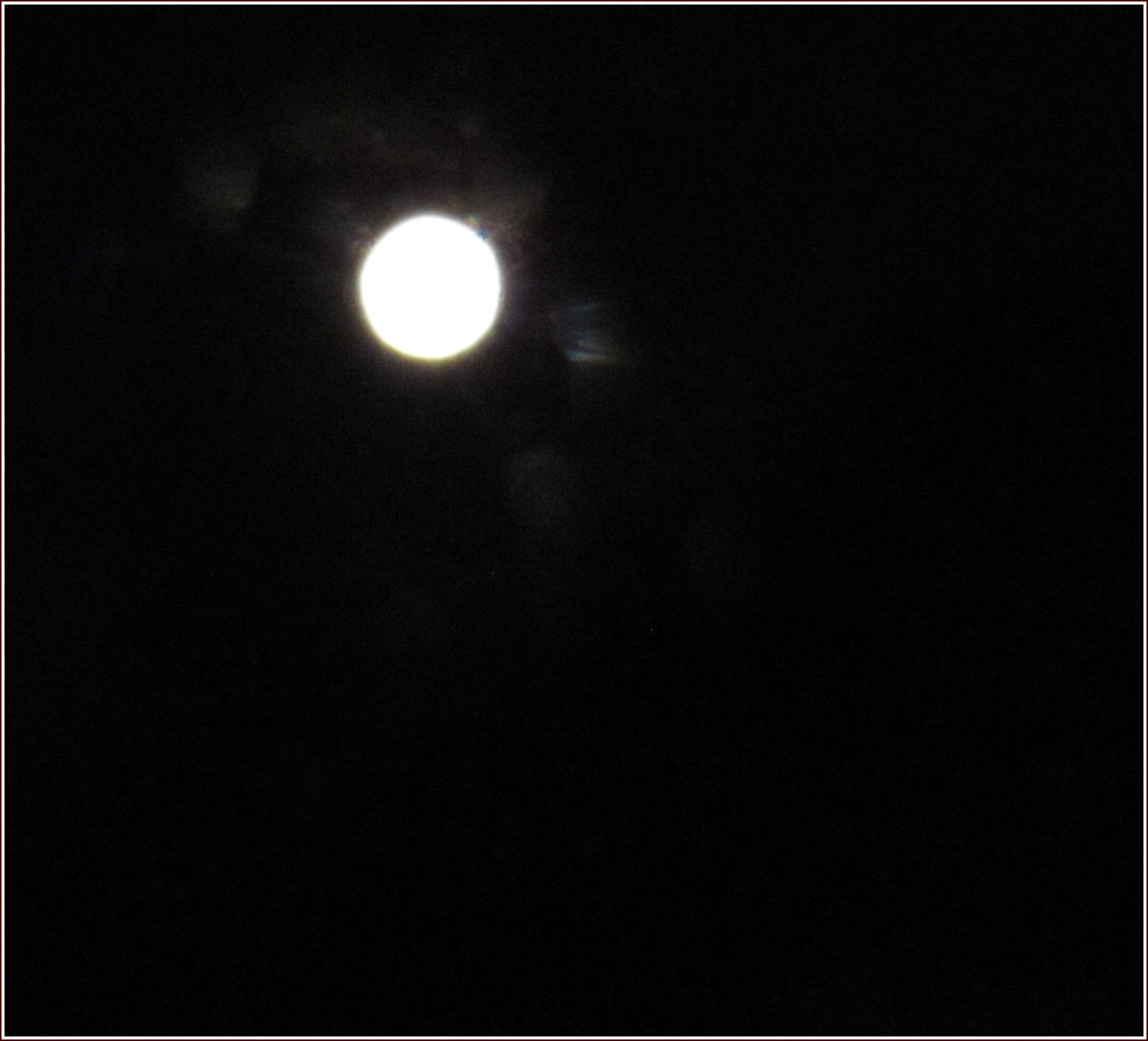 I had to get up early Friday morning to run back to the Little City down the Hill to have the ever-popular mammogram. I took the winding back road into town in sports car mode most of the way. Felt great. I used to do a whole lot more fast driving, but now I'll lolligag along sometimes as well, with attention to things around me, rather than on the nuances of the road. When I came out of the Imaging Center, I looked at my poor car, covered in dust and dirt, and decided to go crazy and go to the car wash.

As I sat in a parade of cars ahead of me taking turns getting churned up, I figured my poor car hadn't been washed since when I got back from my September trip to France. It sits during a trip in a very dusty spot, without even the benefit of a windshield washer being used, so I always get it some gas and a wash to drive home. Either I need to take more trips, or spring for these crazy no-occasion car washes more often.

In the city near the airport, the car wash handles the cars more than one at a time. This one doesn't. There's the car ahead of me in the mist. 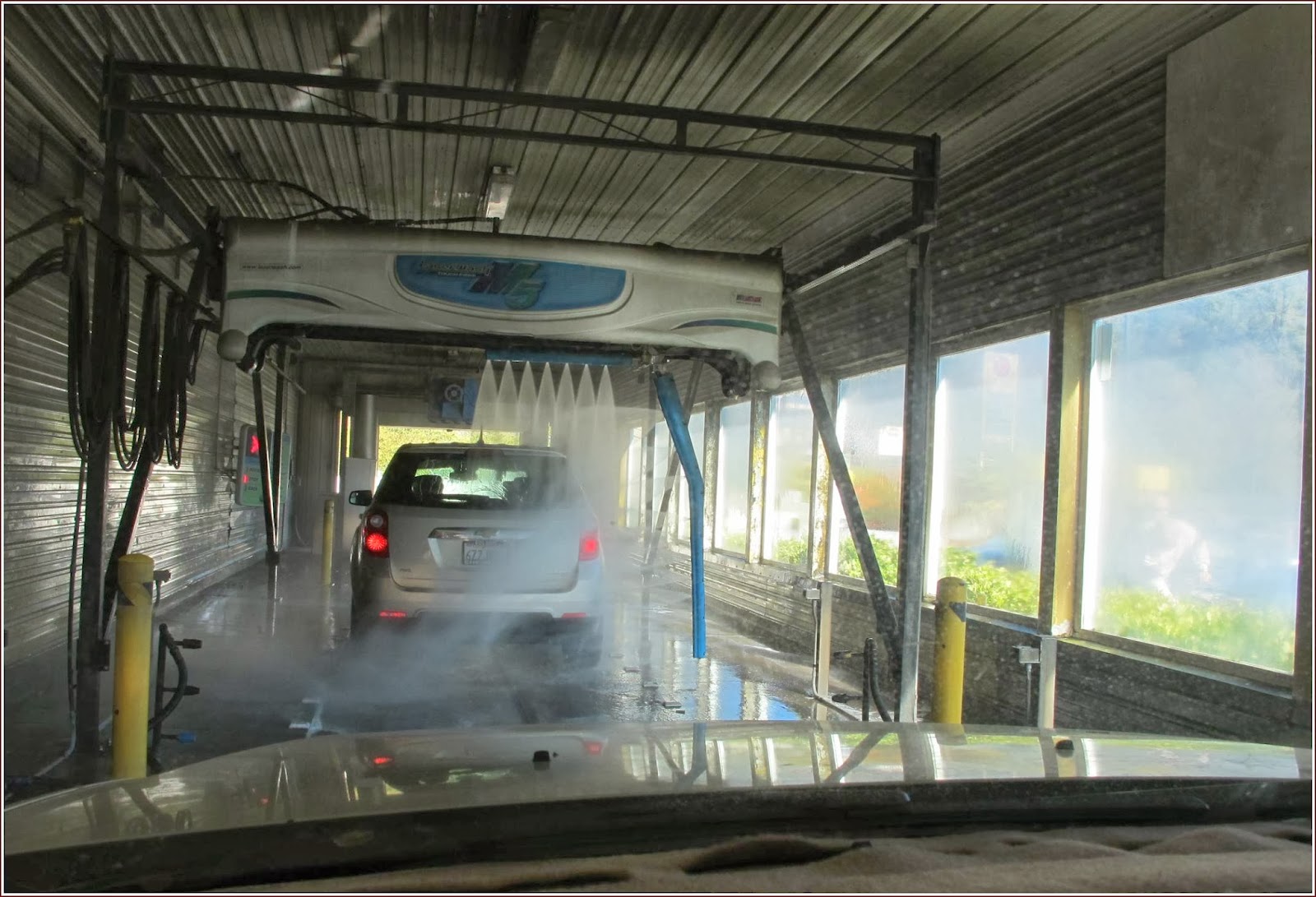 A recorded female voice gives instructions which can't be heard once your windows are tightly closed and blasts of water and air are pounding you. You can just make out the silhouette of the car ahead departing as soap blasts me. 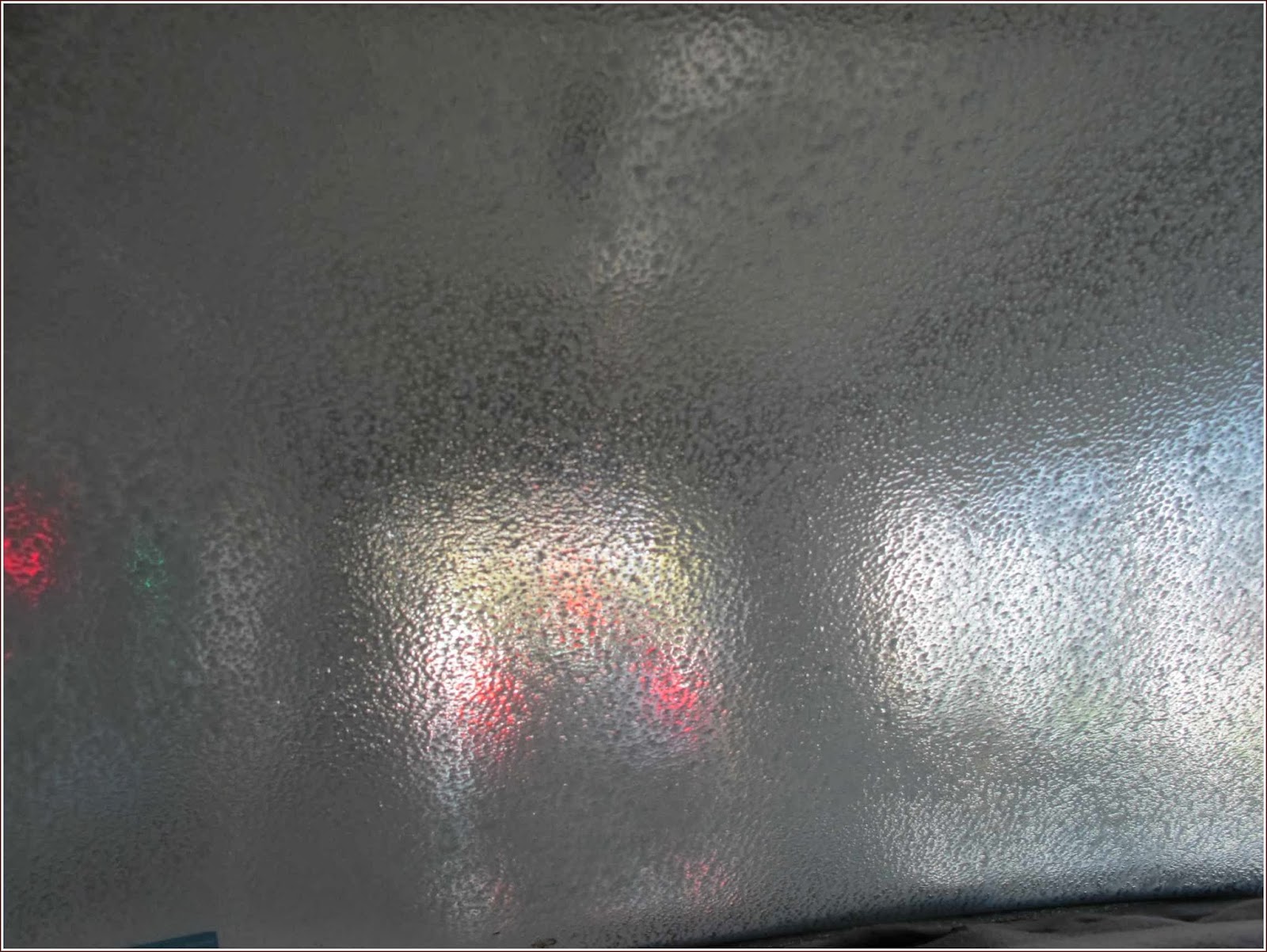 Then there is the three color polish. I thought this was quite lovely. 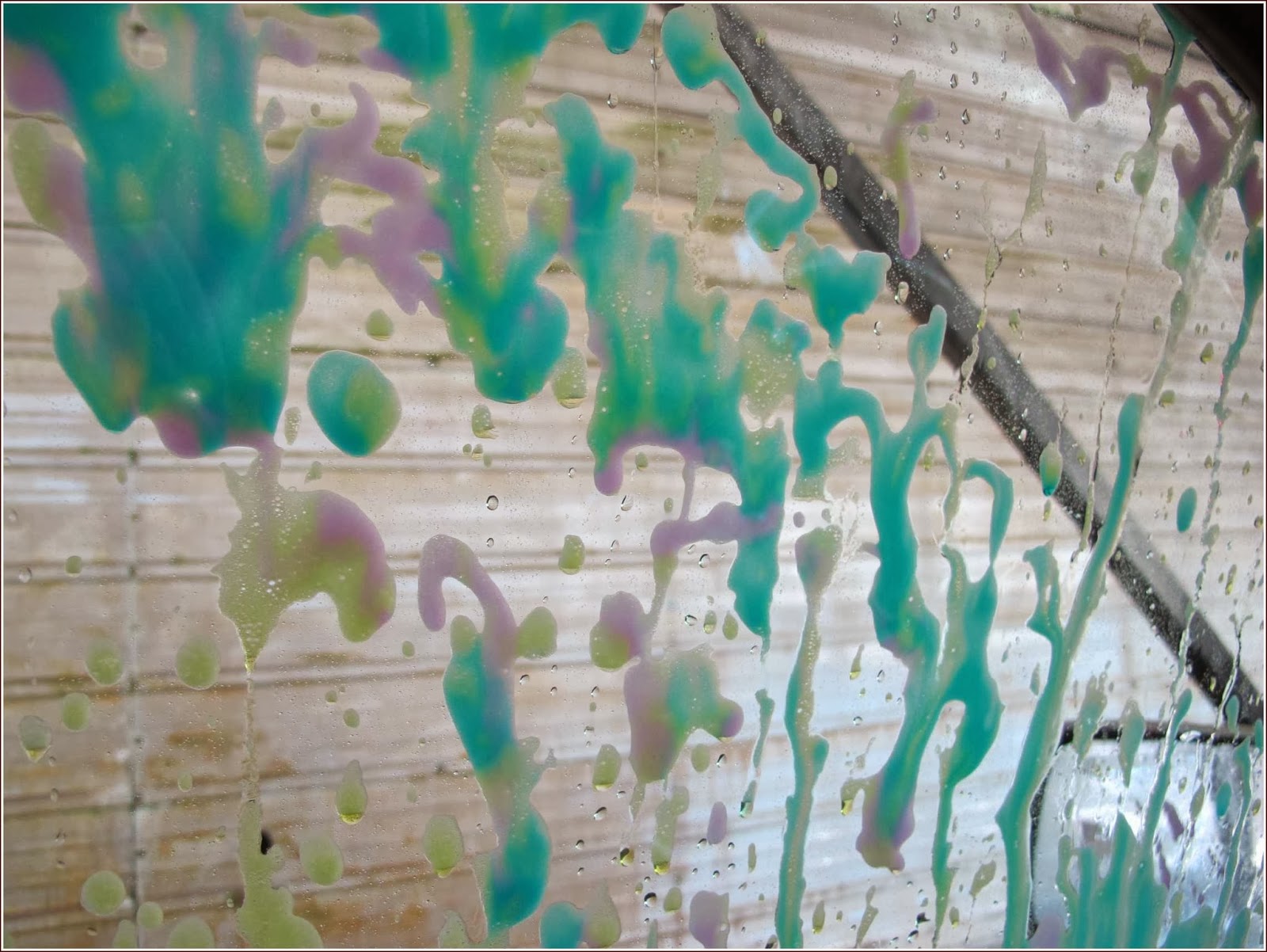 There were no tentacles of a giant mop, nor the huge rolling brush. In fact, I think my car was untouched by anything but liquid and air. There may be no humans involved, and we drive our cars through, rather than "put it in neutral and don't touch the brakes." I'm waiting for the green light and I'll be done. 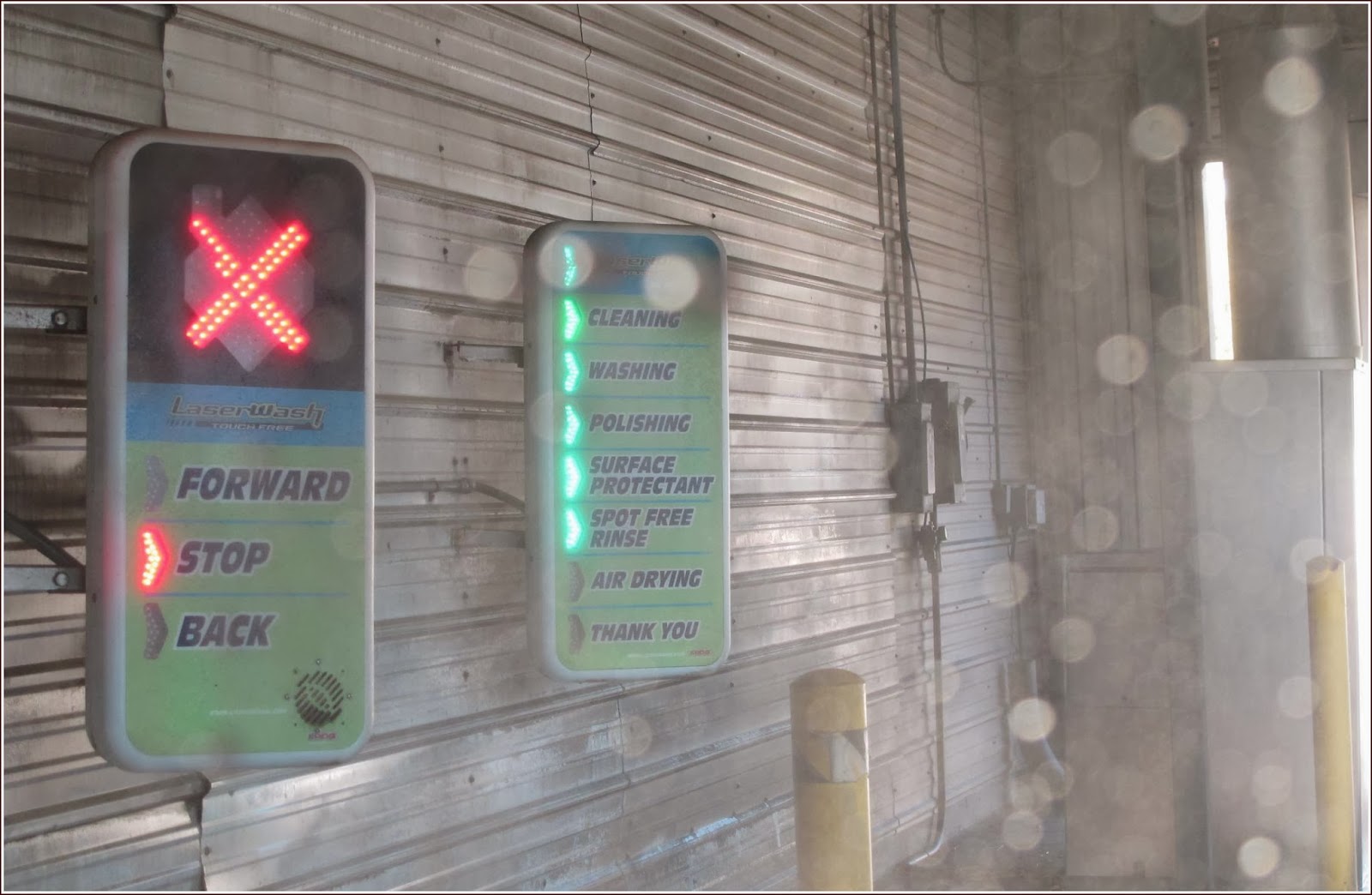 When I arrive home, another delivery awaits me on my deck. The tiny kitty known as Little M came out to greet the car as if to make sure I saw this. It's the coffee table which has arrived without fanfare or appointment or Threshold Delivery. It weighs 38.5 pounds, has no handle or side grip, and so I cannot lift it. Fortunately it's something I can handle with leverage and ropes and pulleys. No, only used leverage and a foot jammed under a rolly wheel to tip the box onto my 3- or 4-way hand-truck/dolly. It just fit through the door lying flat and I parked as you saw back in the first picture. 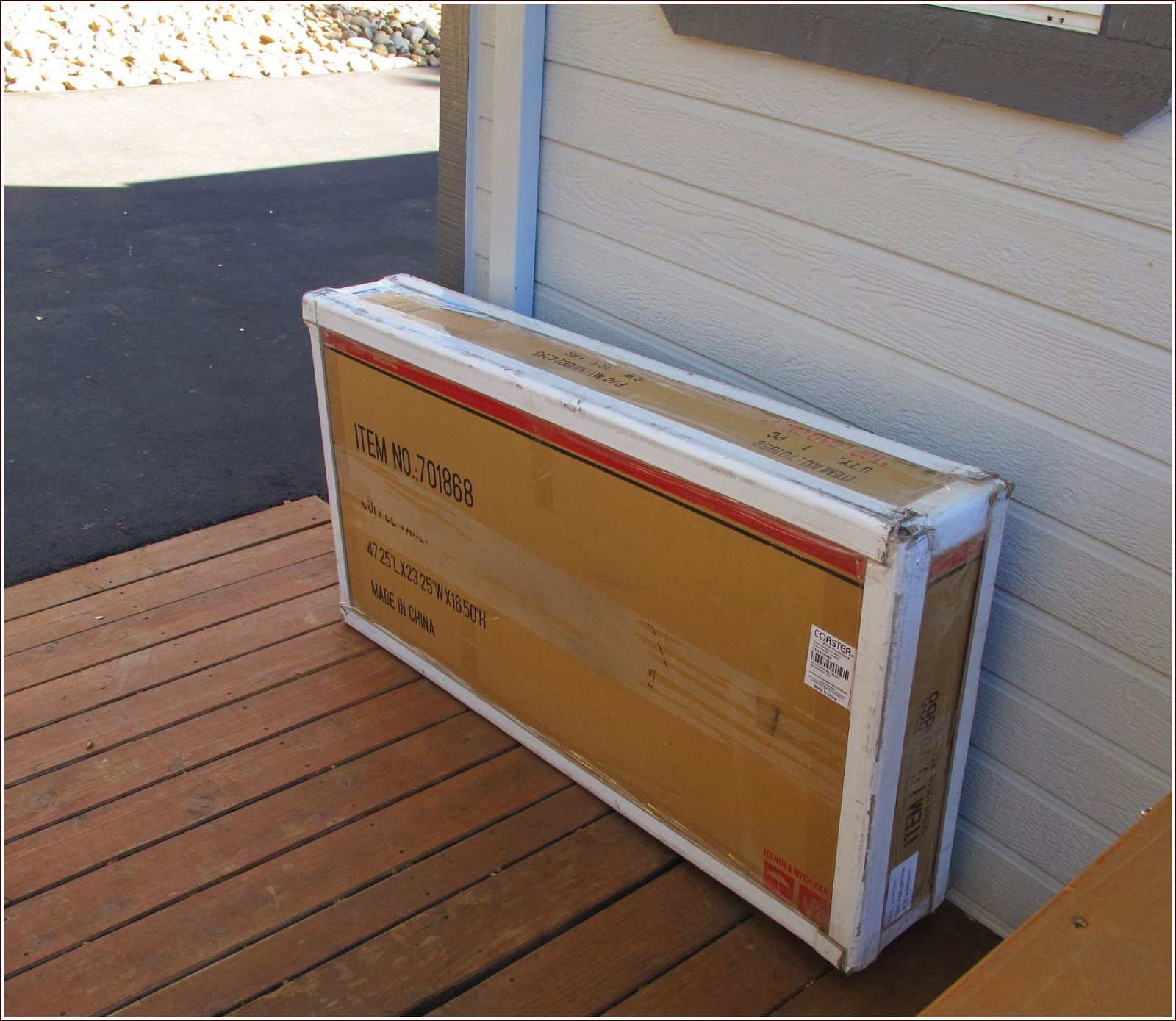 I really didn't intend to start any assembly projects Friday afternoon. I would let them sit there until this morning and then get to work. Curiosity got to me, though, about just how easy it was to screw the legs on the Euro Lounger. I got scissors. I approached the big upside down box. The bottom of the box, not surprisingly, was fit into the "top." It looked like the tape which had gone all around the edges had been cut, then a lot of perpendicular tape added to hold top and bottom together.

I began slicing tape. I lifted the bottom of the box out of the top. There was the bottom of the lounger. Hard to tell where the zipper pouch for the legs might be among plastic and a bazillion little packets of silica gel taped to the plastic. And, I couldn't see any instructions or other parts packets. I cut the corner tape so I could flatten the "top" and see under the lounger. No deal. My dilemma had compounded. I would need someone(s) who could lift the 150 pounds to find the instructions and parts under the top, then someone(s) to flip it right-side up once the legs were attached.

I appealed to the Woman with Many Handy Resources, the head honcho of my landscape maintenance service, and she knows a guy. She'll have him call me.

I think that was this morning that we talked. I don't wake up very early Saturday mornings. It's usually my sleeping-in day. Then I get out my laptop to get my start with email and Facebook, and blogs posted since the night before. It goes well for awhile, until Henley decides it's time for me to get up. "Okay, Henley, I'm taking your picture with me," I told him. That's Henley and me in bed. I'm reading things. Jokingly I told the Facebook people that I'd publish a selfie with a cat behind in my face. 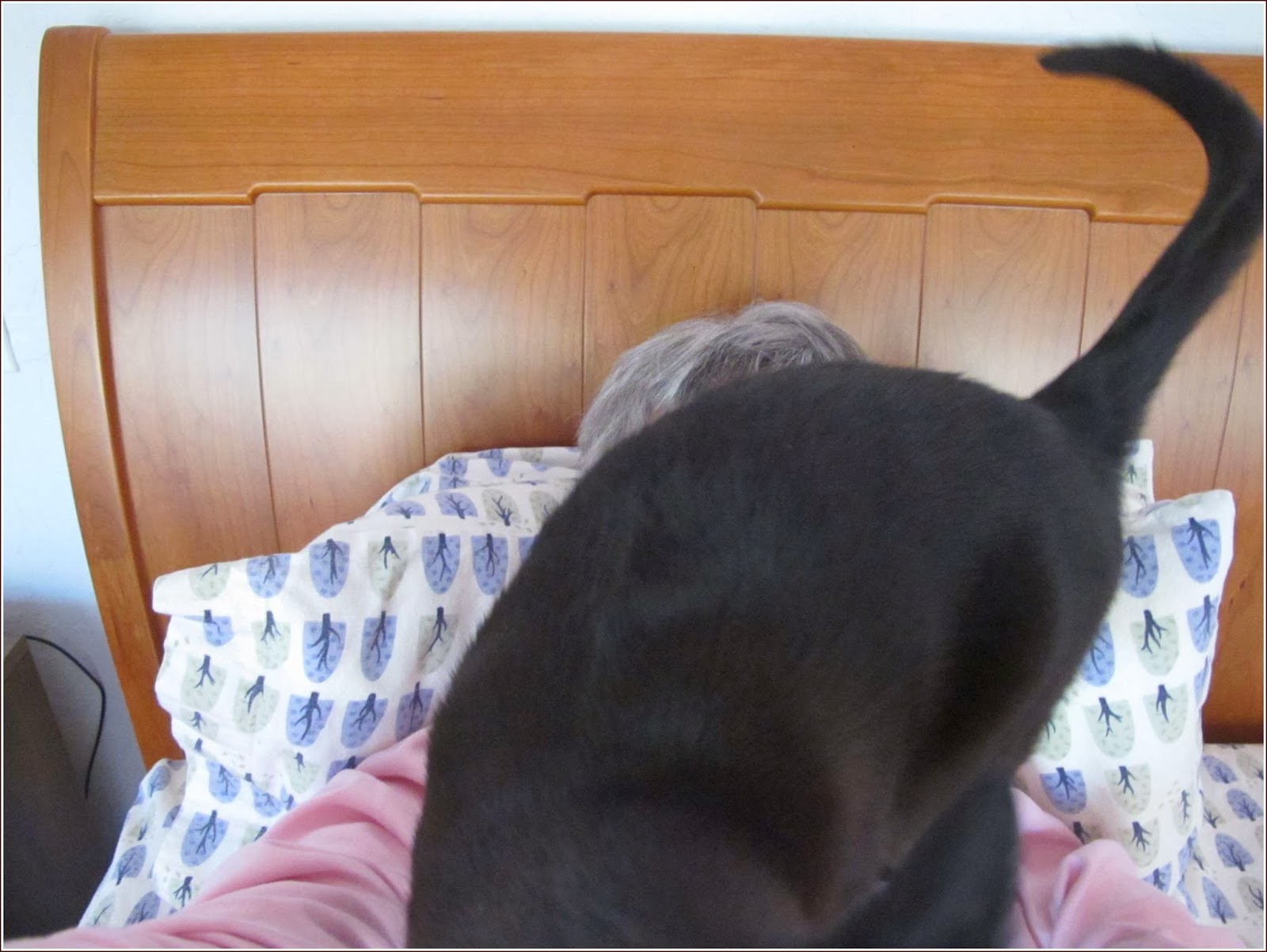 That didn't happen until later when FB Friends were discussing photo special effects and they were posting "Posterized" pictures. I asked what it was and how they did it and found it's some kind of filter in the photo software.

Filter? Huh? I searched my software. It has dozens of buttons I've never touched. I explored until I found one that did what sort of resembled what I was seeing as "posterized, and applied it to cat's rear end in the face, thusly. 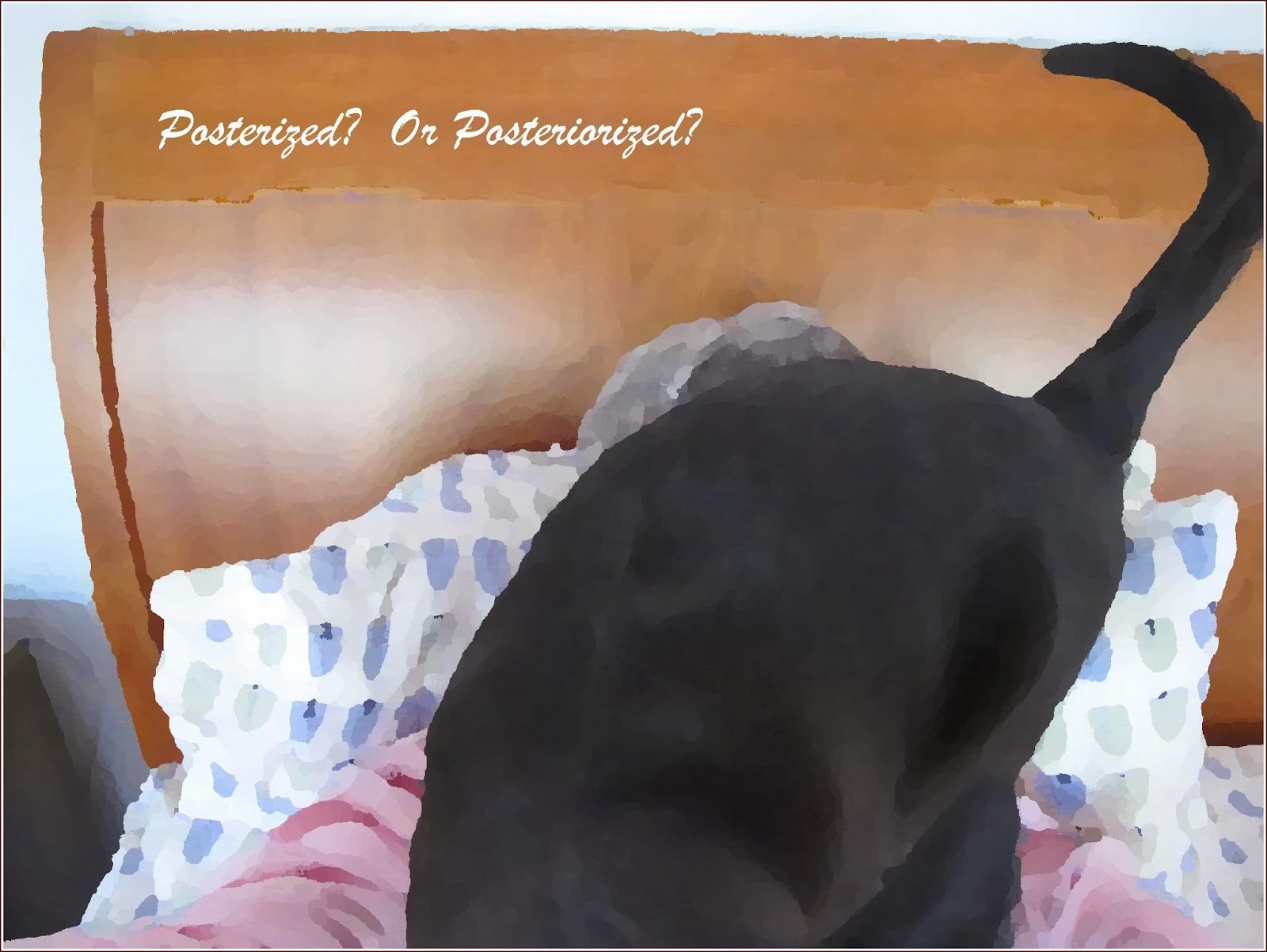 I didn't hear back from the guy until latish this afternoon so I thought I'd be waiting until Monday for the job. He said he'd be over in a few minutes. And he was. He is able to wrangle pianos so a mere 150 pound Pillow-Top Euro Lounger is not a problem. He lifted and I retrieved instructions. He assembled. The special nuts and bolts weren't as easy to install as one would think they would be, and two pairs were faulty. The well-equipped tool box and miscellaneous hardware I inherited from my husband made it possible for him to finish the job, and he flipped the Euro Lounger up on its feet. We ratcheted the back through some of its different configurations. We sat on it and pronounced it firm but comfortable. He does all kinds of handyman things. I know his wife. She is also a quilter.

I sincerely hope the cats won't want to claw it, whether it's real or faux leather. 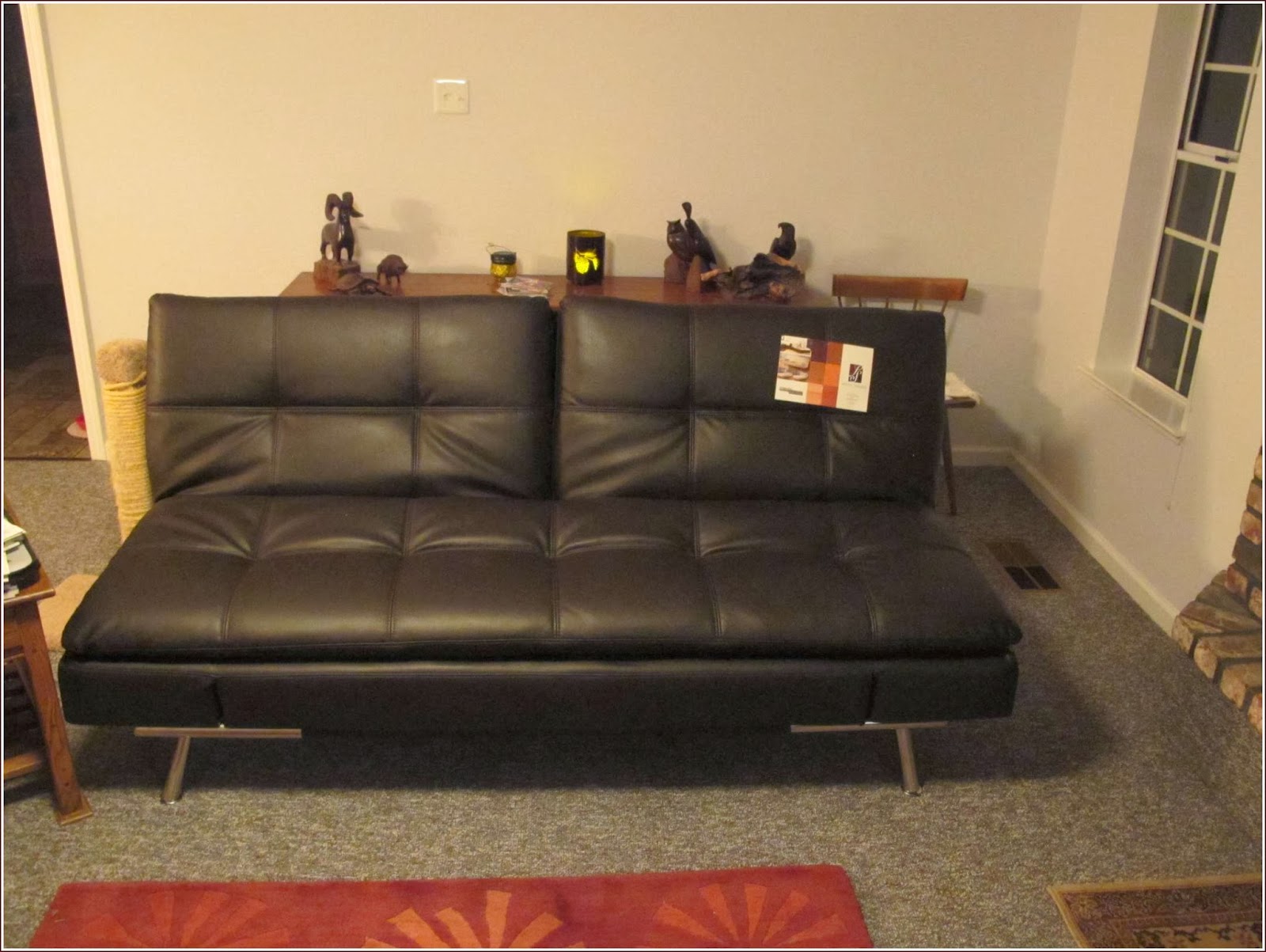 Next, a coffee table. And maybe some mail sorting. See you soon.