I could breath a sigh of relief when Christmas arrived and I had managed bring enough order to the post room-addition chaos to accommodate at least some of my kids' families and show off the home improvements. A few things went by the wayside to reach that condition. I still have to send out my annual holiday letter, and do my Christmas shopping. And I haven't blogged in over a month.

It's been a busy year, what with trips to France, quilt camp, weddings in San Diego, a sojourn in Yosemite, and sticking it out through the ferocious Rim Fire which burned 257,314 acres between us and Yosemite. And being displaced to various degrees for several months for construction. I guess it was the pressure of the pace that finds me dozing off every time I sit down at the computer since Christmas.

So I'll whisk you through December in photos, although there were some notable occasions when I completely failed to take any.

My TV should have awakened me on Dec 8 with my Sunday morning news shows but it doesn't. That usually means there has been a power flicker that disables the timer, but it's not until I turn the TV on manually at 7, when I get up to put on a cup of coffee and feed the cats, that I hear the buzz from outside. Generator running? It isn't its scheduled time for exercise. I open a window. Yup, it's running. Who knows for how long? But thank goodness the generator was moved out from under the house and reactivated when I had the room addition put on. I'd shut it down years ago when I got carbon monoxide poisoning on one similarly snowy day. It never should have been put under the house in the first place, but Husband had a way of getting his way . . .

I keep in touch with the power company. It has an excellent automated outage reporting system and I always ask for updates about changes, even after bedtime. (Nine o'clock.  Ha ha ha ha. If you've been reading this blog for long, you know that nine o'clock is a long way before my bedtime.) I was getting updates about every two hours. At seven p.m. I got an update that said power would be on, or I'd be given a new estimate, at nine. Twenty minutes later, power came on.

When the snow plow cleared the streets, they left big snow berms across both ends of my U-shaped driveway, so I don't try to leave the property until Monday. I plow through the iceberg on the least-steep end of the driveway with my little all-wheel-drive SUV.

Power outages had been shorter in other areas of our development and in town, but here you can see dirt and debris by the sides of and across the road, and the sawed up tree segments where a big tree came down from the left and took out the power lines on the right. That's what took so long to clear up our outage. 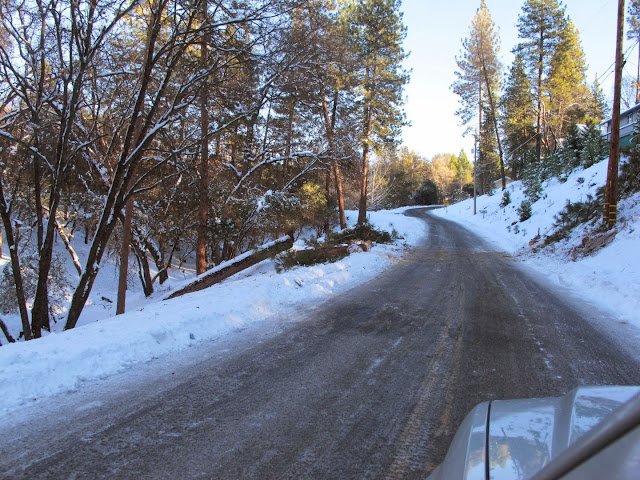 There's a massive crunch on Tuesday and Christmas morning to get the boxes that have been stored in the newly designated guest room consolidated on the racks at one end of the room so the two dressers and couch/bed I got from Granddaughter earlier in the year can be placed for use by Daughter and Granddaughter. I leave the heavy lifting for the two grandsons and the granddaughter to move the furniture into position when they arrive Christmas afternoon, and to haul trash and other heavy stuff out for Grandma. I've finally organized my new quilting studio and the Grandsons will have mats and sleeping bags to camp out on the floor in there.

I'm also in charge of making bean soup and corn meal muffins for the Christmas evening supper. Sister and BIL will be bringing desserts over and Daughter and her crew will do cheese.


Son is working night shift on Christmas and won't be able to head for the mountains from the Central California coast until after breakfast. He's bringing his Daughter (the second Granddaughter who will be with us this year) and his BTB. She calls him her Fish Nancy, because the word fiancé sounds strange to her, so I figure BTB is Bride-to-Be, so she won't feel awkward being called a fiancée. They are in charge of bringing lunch for the day. Granddaughter, who's studying the culinary arts, is making salmon cakes. 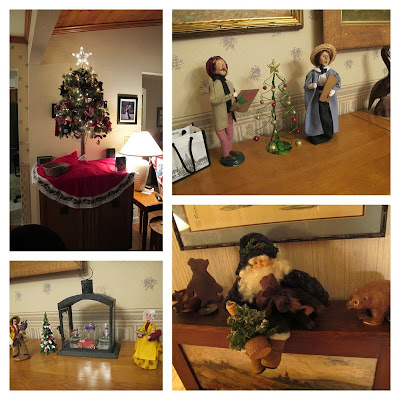 And I took no photos of the dinner! Nor a family photo. All the things I wish I had done, I forgot.


Son has volunteered to cook breakfast on Friday morning at Sister's house before everyone heads for home via Yosemite. Youngest Granddaughter is frying beignets, eggs are being scrambled, coffee brewed, veggies warmed, table set, and we all chow down again. Sister and I have decided to go to Yosemite, too, since neither of us have been up since the fire to see how much damage is visible from the road. BIL decided to stay home and oversee the manor. I could not find my camera when we headed out from Sister's house, and we stopped by my house on the way and still couldn't find it. So no Yosemite pictures!  (Did any of you get a picture of Em doing the yoga pose on the edge of the Merced River canyon at the Half Dome view point?)

And then at the end of the day, we reassemble after scattering for the afternoon for a hot toddy in the Great Room at the Ahwahnee Hotel. It's dark when Sister and I get home to Our Little Town.


Entertaining intimidates me. I don't know whether it has always been this way, but to ease my hesitancy, Daughter volunteered the younger generations to take care of the cooking. And I think Sister was in on that too. I must say I was pampered by children and grandchildren. Any time I seemed about to get up or do something, it was "I'll do it Grandma (or Mama)." There was a line up of kids giving back and neck massages to me and to each other. When they left, I had only a sky high pile of washed pots and pans to put away. I really felt pampered. Thank you, kidlinks. I love you all, including those who spent Christmas elsewhere.