The red sky on Sunday morning infused the landscape with pink. It was the second morning of Red skies in the morning, Sailor take warning. We're all hopeful that it portends rain. Weather men began to cautiously predict . . . 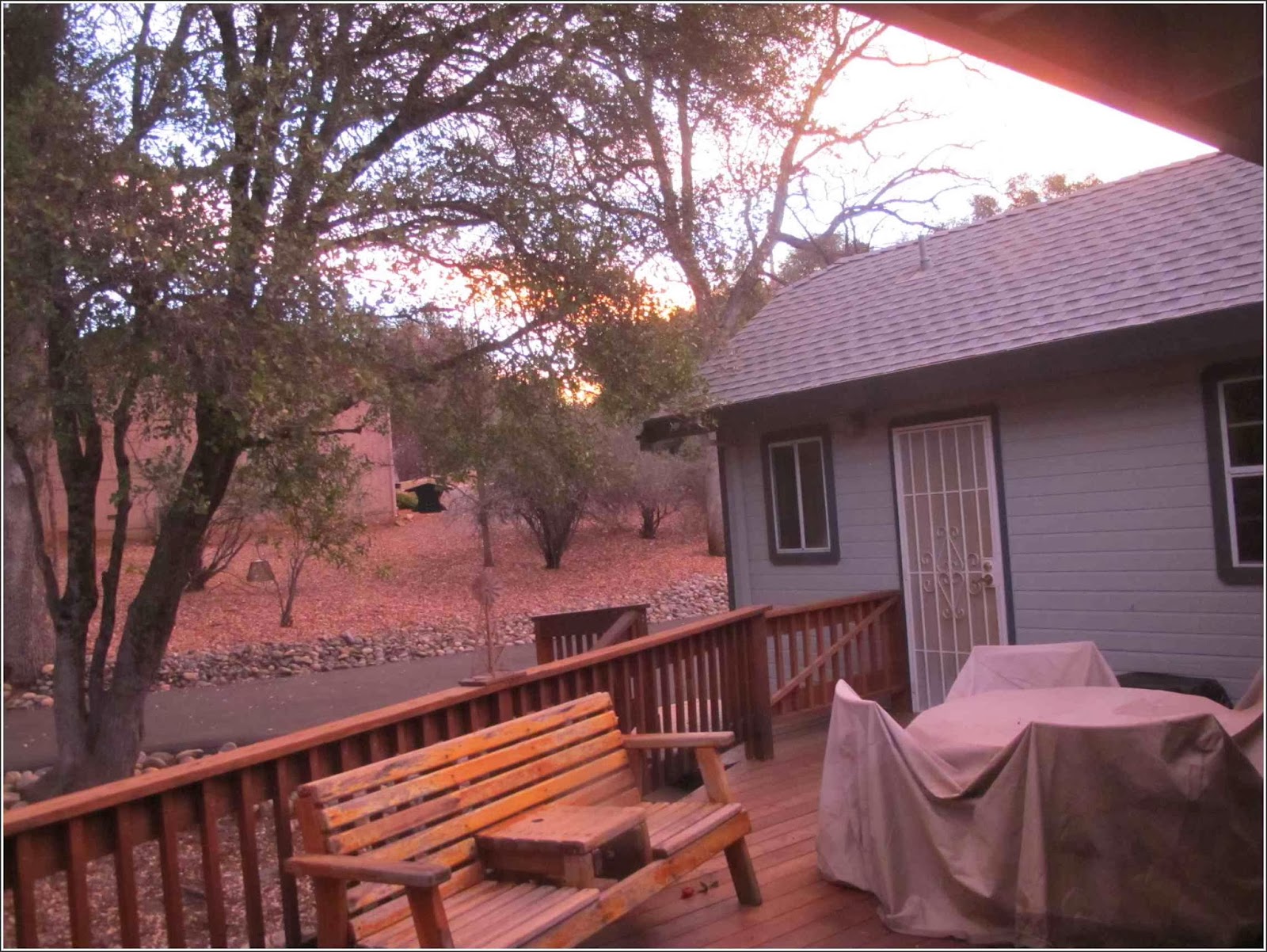 Pete,
You won't remember me. We met more than once, me, as one of a crowd of teens and young adults who sat around you on the ground and on floors, on benches and on rocks, at hootenannies in California and Ohio, singing in support of peace and social justice and civil rights. And hanging around just to be in your presence. Your voice and your struggle fueled our enthusiasm and our dreams. You never gave up the fight for the dream over these many years. You've had a long life and a good one. You will be missed. 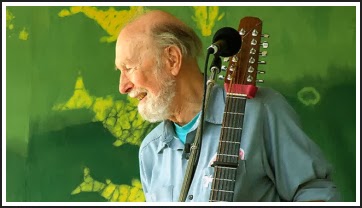 It's that time of year to buy 2014 season tickets for Stage 3 Theatre in Sonora, California. I purchased my regular season ticket, but hesitated a bit before deciding go ahead and get a ticket for the Saturday preseason Special Engagement, Looking Over the President's Shoulder. I didn't know much about it except that it's a one-person play about the man who'd been butler to several Presidents. Was it reminiscent of The Butler, on a similar topic? I haven't seen that one either.


There's usually a standing ovation for any play, but it unfolds slowly as cast members take their bows in order from minor characters to the stars. I will look cautiously around, not wanting to be the first to rise.

This was a one person play, so there's no unfolding, but I leaped to my feet instantly, applauding as loud as I could.

Alonzo Fields was a butler to the four presidents and their families from 1931 to 1953, presented as his reminiscence as he retires. The audience sits on three sides of the central stage, simply dressed with a bus stop bench, an elegant dining table, a sideboard, a service cart, a movie screen, and, out of view, coat hooks whence the actor, Dwight Mahabir, gets his change of jackets. Mr. Mahabir's deep voice can ring his words through the ceiling girders or drop to a whisper as he shares confidences with the audience. Oh, and his singing voice!

I wanted to race home and do a review that would send you all running to the theatre for the final performance on Sunday, but it was too late to make online reservations.

Material for the play by James Still came from interviews with family members, private papers and diaries, and Fields' book My 21 Years in the White House. Publication of books by domestics was subsequently banned.

For a professional review, see here.


Sunday was devoted to a project for Soroptimist that was due by the 28th. I worked until I was beat, then realized that the deadline is February 28th, so I didn't have to stay up all night to finish.

Two chairs arrived to replace the tattered love seat in the living room. I'm not even sure what day they came. They're in boxes. Some assembly required. There are two 4-tier shelving units in boxes in the basement. Some assembly required, but those should be a snap. I've already done two much bigger versions of those for my quilting studio. I dawdle around until Monday afternoon to assemble the shelving.

I see why people tear the boxes apart. The "slipping it out the end" method took me 20 minutes. 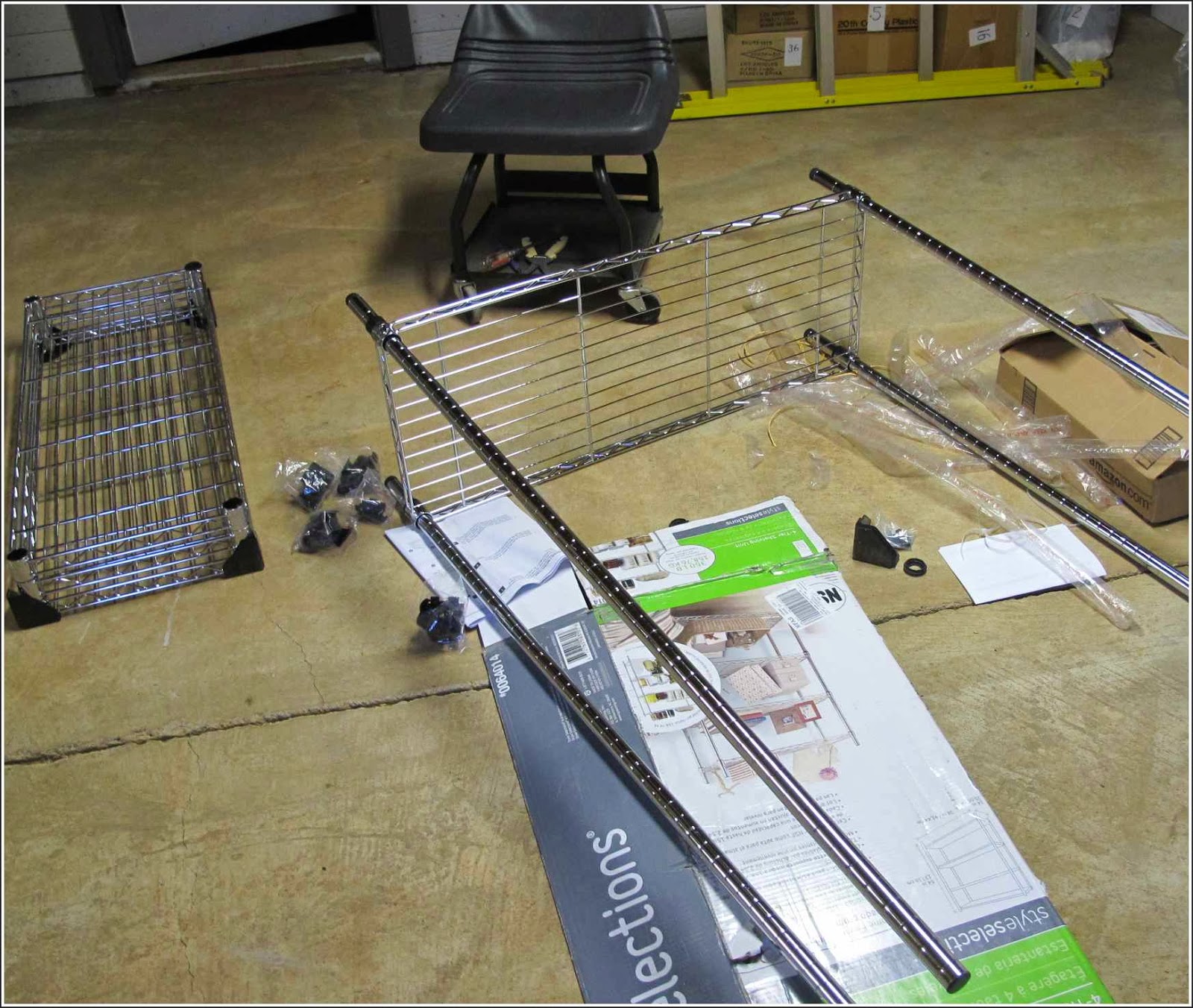 First item of business is to count all the parts. I almost breezed by that step, given the smooth way that had gone on all my prior assemblies. Most of the counting is completely obvious. Four shelves, 4 top rods, 4 bottom rods, 32 spacers. The first bag of spacers has 6 in it and there are only four bags. I see a prospective problem. We are two spacers short. That takes care of one corner of one shelf. I had one missing sticker, cosmetic only, for the DVD shelf I assembled. A replacement arrived in a hurry and I assumed spacers would, too. Meanwhile, I could either swipe two out of the other box, or see whether the leftover spacers from the quilting studio shelves would work.

I finished it using two not-quite-identical spacers from the quilt studio shelf set, and got the second set out of the box much more quickly.

I launched into the second box, this time actually counting first. All the numbers were right so I started putting the corner rods together and ran immediately into a problem. The double-threaded joiner on one of the top rods had been started hard and crooked into the rod. I couldn't get it out. I don't think anyone could have, especially without demolishing the threads. Thwarted! I was too late to call for the day.

This morning it only took one "I'll transfer your call" to get the guy who could help me. Two spacers and a top rod and joiner will be on their way.

Today I upgraded Quicken from 2011 to 2014. I had to do it twice to make it "take." On the face of it, it doesn't look too different but Quicken warns that certain functionalities in 2011 will be deactivated in April. And I've certainly discovered a bunch of old obsolete accounts that show balances that I know are not there, so there's no relying on "the bottom line."


The UPS guy delivered a package this afternoon. I will no longer have the excuse of bad weather or fear of missing a favorite TV show in order to exercise. 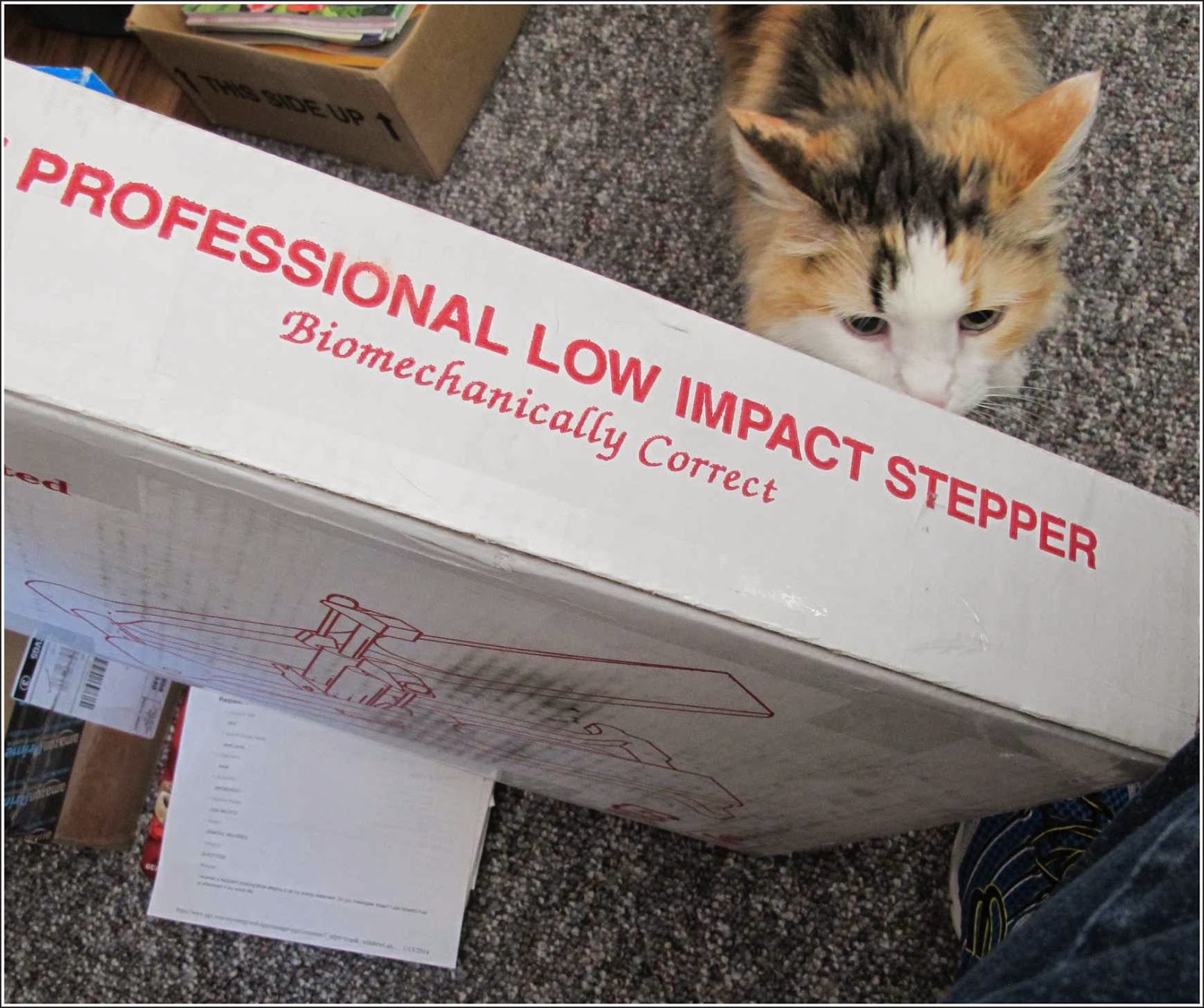 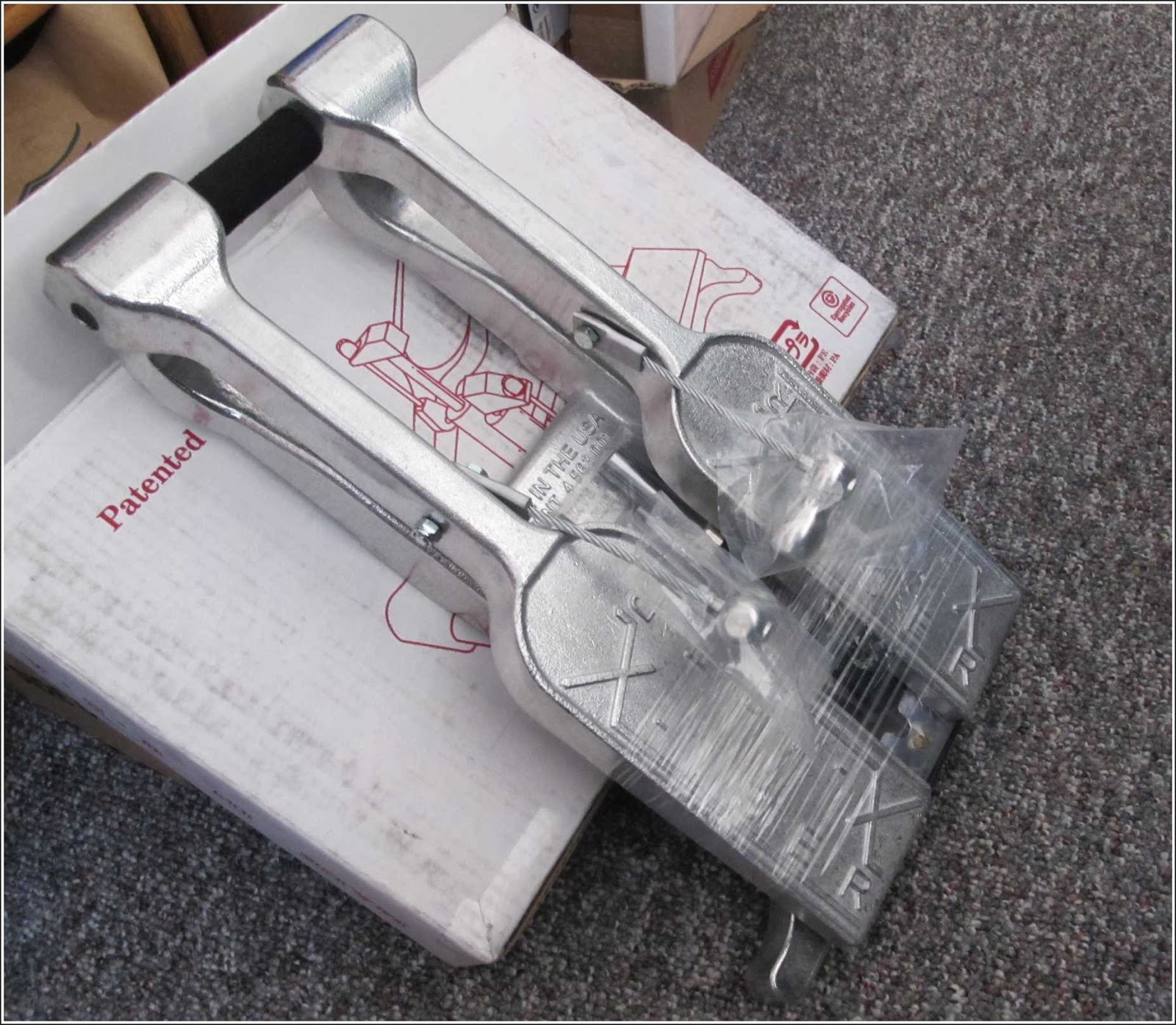 This thing got all five star reviews and passed everyone's durability tests. It fits back in the box so isn't a room hog, and it's light enough to move around. Need to use my walking sticks "until" my balance improves. It's untested so far, because just as the UPS guy arrived, I was on the phone with the vet. 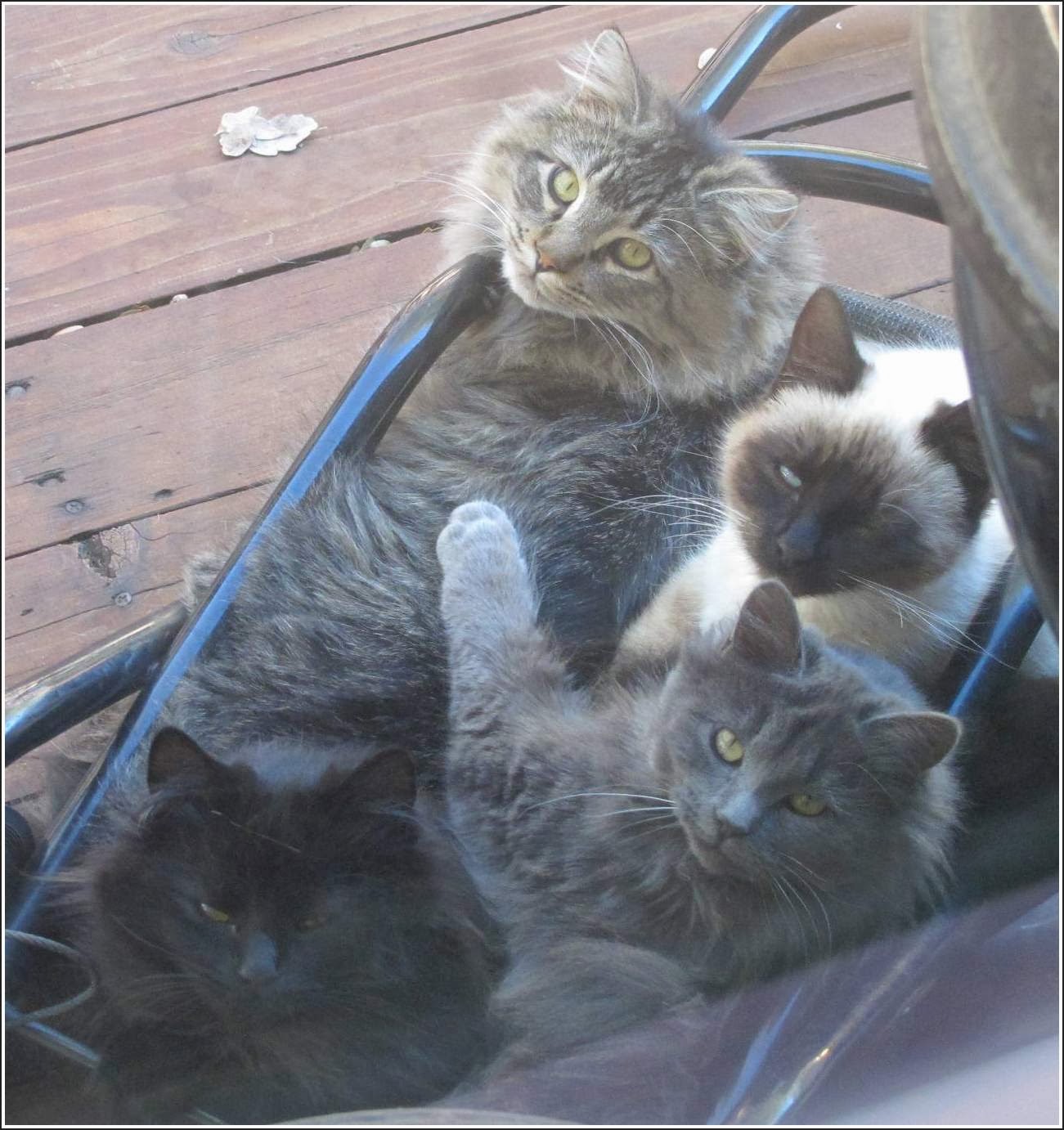 The little grey cat seen here on the lower right a few weeks ago, was lying over the water bowl, her face barely above the water. Leaves and dirt were all over her back, her eyes were squinty, she didn't run from me when I touched her. I couldn't see any injuries on the top of her, but she did go hide when I went to get the package from the UPS guy. Later she returned to the water and allowed me to touch her briefly. I've never known whether this kitten is a he or a she, but there have been cats in heat out somewhere, since the big old black male, Black Kitty, father of most neighborhood cats, came around for the first time in months. He is really old, a homeless cat rather than a feral, and I thought he'd probably died by now. The little grey cat stinks of cat urine, so it just strikes me that she's been ravaged. I got a cat carrier and gloves and lifted her into the carrier, without a struggle but several loud meows.

She's in a carrier, with a cup of water and a bowl of food and a towel to lie on. She'll be warm and dry, although her bathroom facilities aren't ideal. Tomorrow the vet is in and if she makes it through the night, I'll take her in and see what's going on.


Well, if red skies in the morning are sailor take warning, does this really mean red skies at night, sailor's delight? 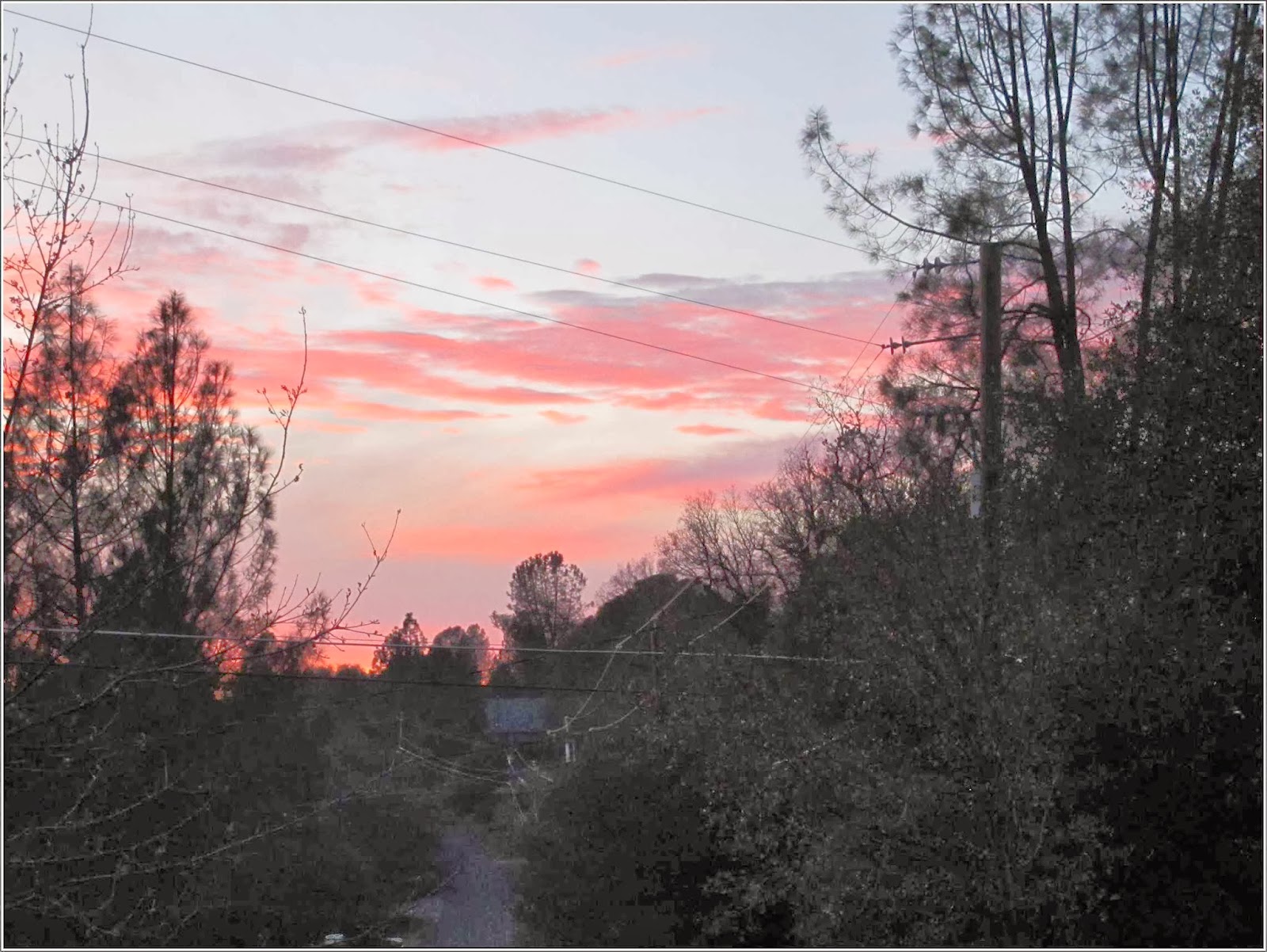 This is our sunset this evening. But the TV weathermen are doubling down on rain coming up in the forecast. We're on the edge of the green rain zones, maybe a tad below the blue snow zones, but we're hoping.