Thursdays Out . . . Funniest request yet

Unfortunately, I took 15, er, make it 12, pounds of mail to open at NeedleCrafts, so half-listening, I don't have the exact facts behind Barbara's yarn creation. Barbara's daughter, who is head of a biology lab at some university (though she said it over and over, it didn't stick), wanted a dissected lab rat. She'd seen one in a magazine and Barbara acquired the pattern from Etsy. I don't know whether it is knitting or crocheting (will my yarnie friends please advise?). It's already pinned out on a board. As they warn on TV, the following image may be disturbing.

There are several retired medical professionals in NeedleCrafts, several of whom have medical-professional offspring, so there may be more of these underway as Christmas presents. There are patterns of other dissections available if you don't happen to want a rat.

Rose has a new pair of sox more than halfway finished. She only wears her hand-knit sox, so knits up quite a few, often with matching sweaters. It's the angle that makes the completed sock look so large. It's really quite trim. 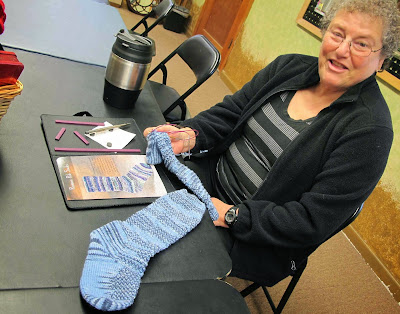 Paula finished a sweater she has been working on. We'd all been hoping it wouldn't fit her, so it might fit one of us, but it fits just right. Paula kept mugging and running through model poses. It was hard catching her still enough to get a clear shot. 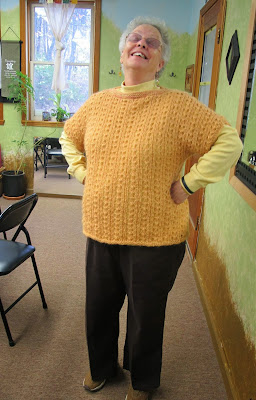 There were several kids' hats completed and a couple of adorable tiny ones for preemies that I missed shooting. 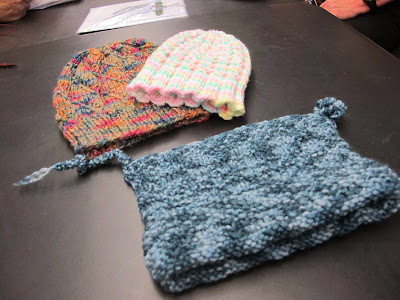 Time to go do the laundry. I've got a wedding to get stuff ready for.