The Gremlins Are Smiling

When things go missing, I blame it on the gremlins. They like to hide things, screw with your mind for awhile, and then -- ha ha -- drop them in your pathway to find again. They might hide your keys for an hour, or the bill you want to pay for three days. Things may be stashed in the gremlins' closet for weeks or months.

If you give up or forget to miss something, it may be years before it's returned by the gremlins.

Darned if they weren't smiling at me today.

A grandson is getting married this weekend in Southern California. Daughter and I have been trading phone calls to make arrangements for the trip about cars and trucks, sleeping mats and bags and places to spread them, hauling and unloading furniture, airline reservations for Daughter to get to work on time on Monday . . . you get the idea. The instructions for finding the wedding venue were in the envelope with the invitation. I had a vague recollection that I had to acquire a parking permit for the wedding venue and no recollection of having received one. I had no recollection of what I'd done with the invitation weeks and weeks before, before I'd gone to France, before I'd collected a huge store of vacation mail from the post office. (Damn bag of mail weighed as much as my carry-on bag.)

So I woke up while the sky was still black this morning, wondering whether Daughter had her invitation. As tiny hints of dawn began to lighten the sky, I'd look at the time, just waiting until I thought it was late enough to text her. I have a horrible time texting on my new Smartphone, with my fingers landing on the wrong tiny touch space, so it took several texts to determine that she was sure she could find her invitation and knows how to get where we are going. Asking about the parking permit thing was beyond my texting capabilities.

This was NeedleCrafts day, so I went to my secret stash of cash to lift out a few dollars for the Senior Lunch we eat there. The stash was missing from its hide out. Yikes! I could only hope that when I'd taken my passport and euros out of the firebox in the safe before the trip that I had stashed my US money in the box. I didn't have time to fiddle with that before NeedleCrafts, since it takes several tries to get the combination right.

Stopped at the post office on the way home and there was a brown manila envelope with the bride-to-be's address label on the outside. A little excitement here with the thought that it might contain a parking permit for the wedding.

There it was! With instructions to get to the venue. Thank you, gremlins. I texted Daughter with the good news.

When I opened the safe to stow my passport and my little envelope of euros, I indeed found my US money stash and recovered it for spending.

When I put the parking permit in the glove box (I hope this is a logical place and that I don't have a major search party when I go to use it), I found the invitation. Good. Both of them are together there now.

But what was this? A black (faux) leather folder on the floor, leaning against the center hump on the passenger side. Is it really ? ? ? I picked it up. My Kindle Paperwhite! I'd resigned myself to its being gone forever. The last I been aware of using it was while I was at the vet in the Little City Down the Hill with Jean-Luc having a medical crisis. I'd assumed I left it on the counter when I was making my payment. That was two months ago as far as I can remember. After receiving no word of it, I unregistered it with Amazon.com. A sad day that was, and an inconvenience that I wouldn't have it on my trip.

I plugged it in and the empty-battery icon popped up. I surmise that I'd put it on the passenger-side floor on the way home from the vet. It had slid between the seat and center console, out of view, and a ride downhill or a rapid stop had caused it to slide back into view. Or, as I prefer, the gremlins decided to return it. 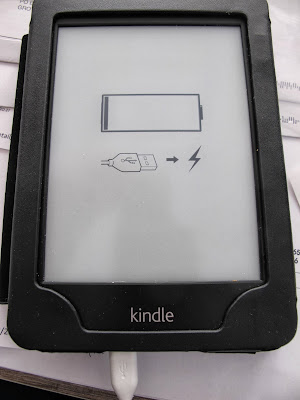 I notified Amazon.com and within a short time, my Kindle 2 was back in business.

Will the gremlins return my Garmin before tomorrow? It's not in the logical place I thought I'd put it. I may need it to get home from the wedding.


Update: The gremlins returned the Garmin this morning. Or, maybe you could say they gave me a clue where it might be.