When I went to a grandson's wedding last weekend (pictures and story a bit later), I postponed attending a theatre performance at the Little City Down the Hill until this afternoon. Lucky I didn't try to postpone again. This was the final performance. I think there was only one empty seat in the house.

There was a fine art exhibit in the entrance area, loved several works. I meant to take a picture of the wall from the Great Room, but I got distracted. I was on a mission to get a picture for my Photo A Day group for the prompt "watching." I knew there would be people here (including me) "watching" the play. There are limitations: no photos of the performance or the set. (Official photos here.) Still, I kept thinking  back to two or three of the paintings.

I slipped into the Great Room for pictures of the flute-player, who was providing pre-show music. People would be watching as they drifted into the theatre to choose their seats, then come back out to listen. 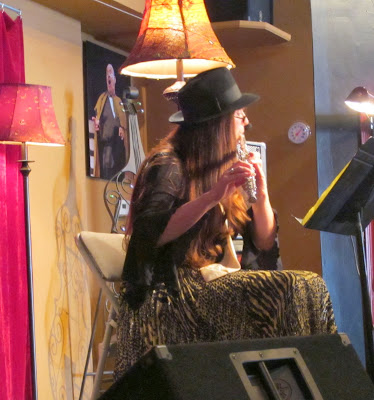 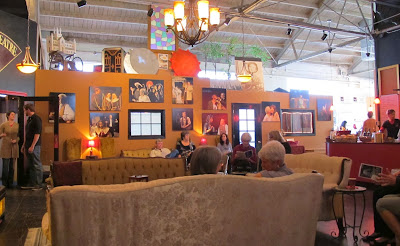 I made a collage of these photos for my Photo A Day "Watching," with the waiting audience filling up the seats, and then thronging out to congratulate the cast after the show. 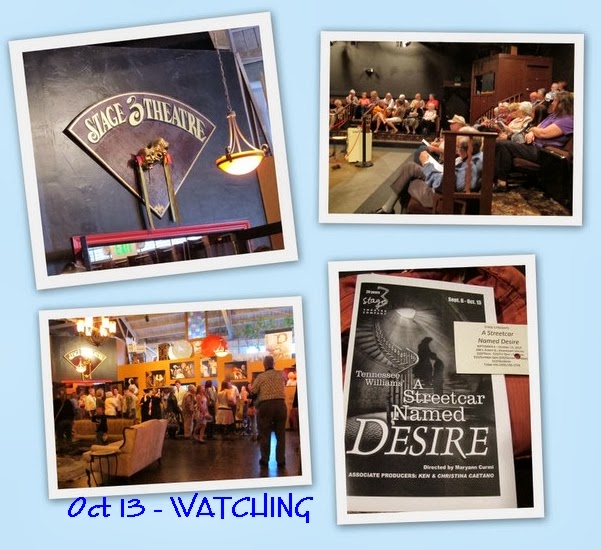 The performance was fabulous. I usually have a hard time not nodding off during the first act of Sunday afternoon plays, no fault of the plays but to the late hours I keep Saturday evenings and the early times I rise to watch my Sunday morning news shows. But no problem here, even though the first act was exceptionally long. At intermission, the woman across the one empty chair in the theatre that was between us asked whether I was enjoying the play.

I was, but I admitted to going through a few puzzled moments wondering what happened to the salesman, then realizing that I was confusing Streetcar with Death of a Salesman. She confessed she'd been doing the same. Later, driving home, my thoughts went to "but is Stanley Kowalski a longshoreman?" Oh! That was On the Waterfront. Marlon Brando was one actor who appeared in two of the movies and there were other overlaps. What else was in common? They were gritty, tragic, done in somewhat the same period. Were they all in black-and-white, contributing to the drama?

The director, Maryann Curmi, told us a story about building the set for the play. It takes place in the French Quarter of New Orleans, and Maryann had her heart set on a wrought iron spiral staircase for the production. She arranged to have it fabricated at "the college." (I'm assuming she meant the local community college.) Then on the date scheduled for the fabrication, the college was closed due to the Rim Fire. What could she do?

She remembered a place up along one of the highways I don't travel much (so don't know her reference) that has a lot of wrought iron where you can see it driving by. She asked the guy there whether he could do a spiral staircase for her. He certainly could. He did and he installed it, then brought in another balcony railing for the opposite side of the stage. It's kind of to the side of the set, so hope I'm not violating the "no photo" rule when I show it to you here. If you are interested in having something done in wrought-iron, we can track him down. 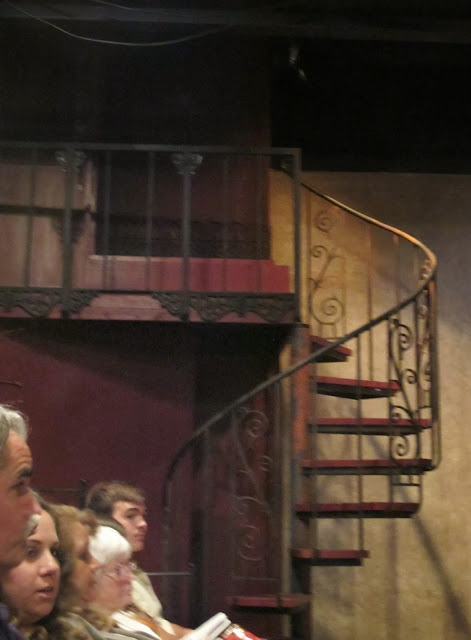 Up to the time intermission came around, I'd been thinking about those paintings that had struck my fancy and went out to talk to the house manager to see about buying two of them. There were phone numbers for each of the artists, but contacting them individually would probably involve one if not two more trips down the hill to the Little City. Was there any way I could pay and take away? The manager would try to contact the artists during the second act and let me know at the end.

The theatre goers swarm out to the cast reception line. I sneak out the back door, first intending to get into the restroom, but giving up to go find the house manager for news about the art work. 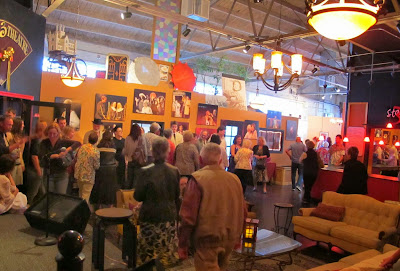 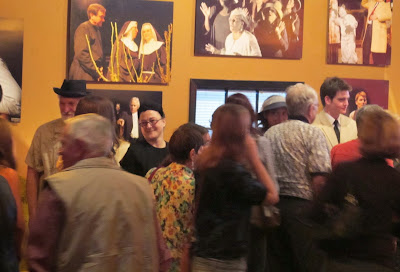 The artists had been contacted, so I could pay and take these two works. In fact, Twyla Olsen had come to the theatre to meet the buyer of her mixed media work, "The Design of Music." (Sorry about the reflections on the paintings, light reflections here, and a chandelier and a glass brick window in the next one.) 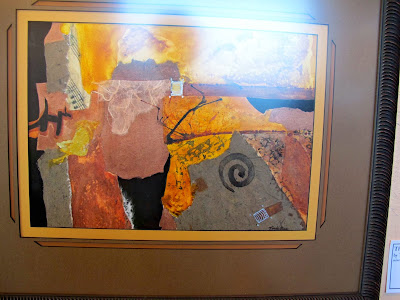 This watercolor is "New Orleans: Street Musicians" by J. D. Anderson. These put me right back into my musical passions of my teens and twenties, still nostalgic favorites. If I can figure out how to hang my guitar on the wall, I'll do an arrangement with the paintings. 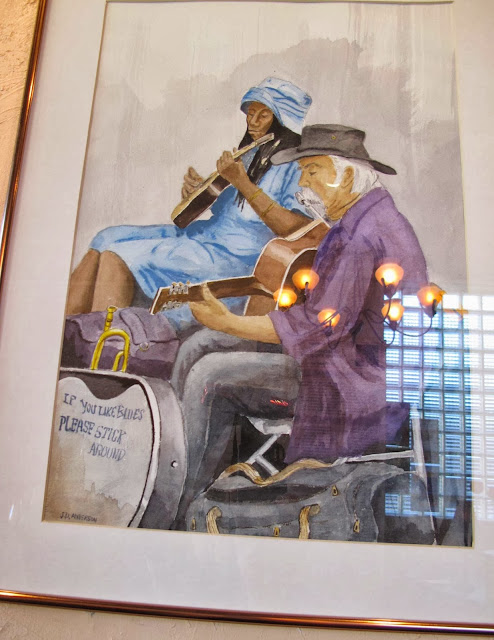 The thing is, I already have a large collection of paintings, by my parents, a grandparent, a great-grandparent. And the paintings by our parents' friends that our parents acquired, and all of which we, Sister and I, have yet to completely divide. Neither have I rehung all the paintings I took down during the painting of the interior of house. Coals to Newcastle. On the other hand, buying art supports the arts and the artists, something very dear to our parents.


The play was long, and I had to go shopping for kitty litter. Shadows were stretching across golden pastures by the time I headed home. You can even see the moon up there, though my lens is not wide-angle enough to include the glowing planet farther to the left. 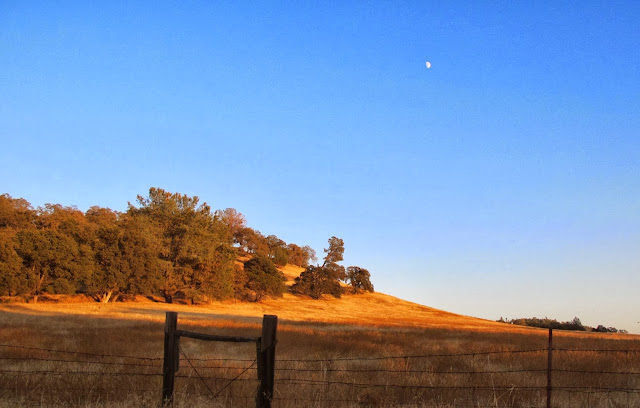 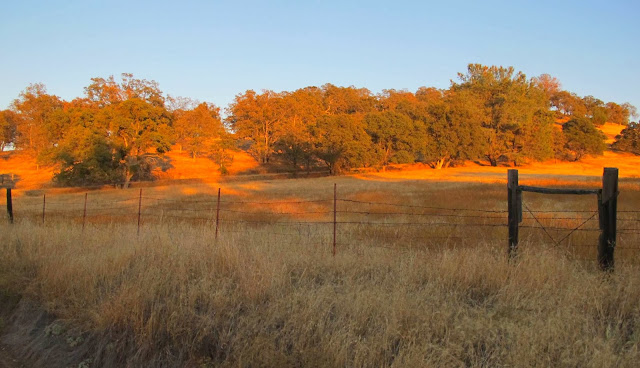 What did I just whiz by?  Llamas?  I've heard they were out here on this road, but as many times as I've driven it, I'd never seen them before. I turned around and went back to catch a few quick shots of them., 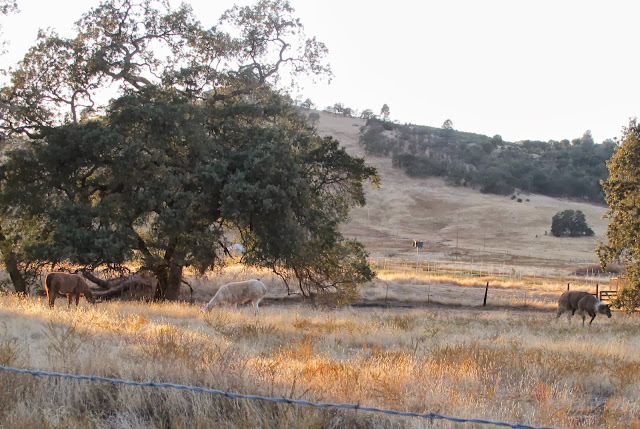 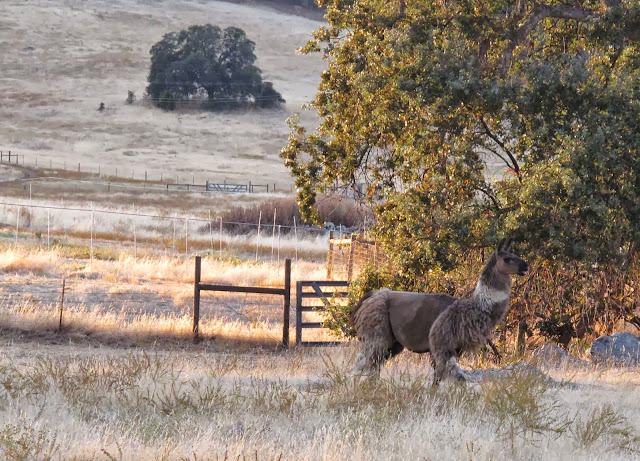 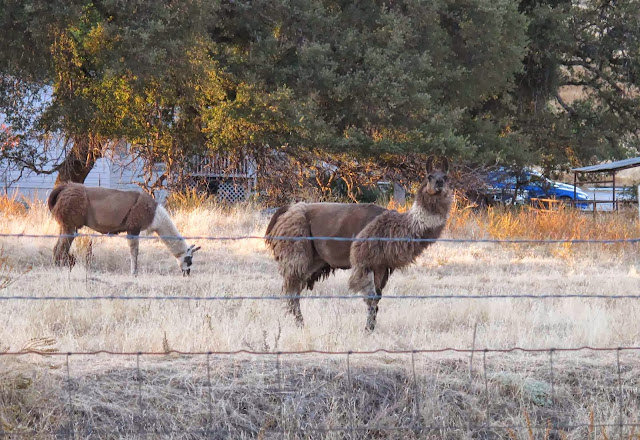 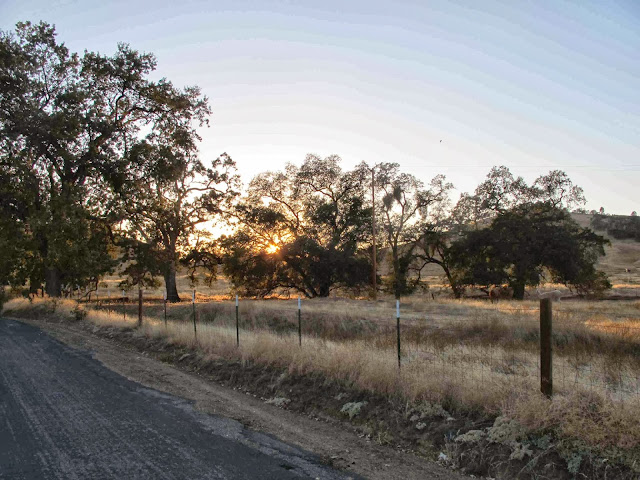 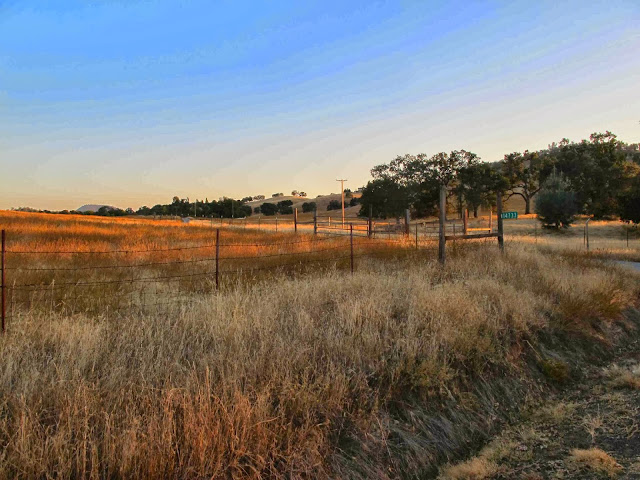 Hello, Halloween. This neighbor has decorations for every occasion. They must have a lot of storage space. 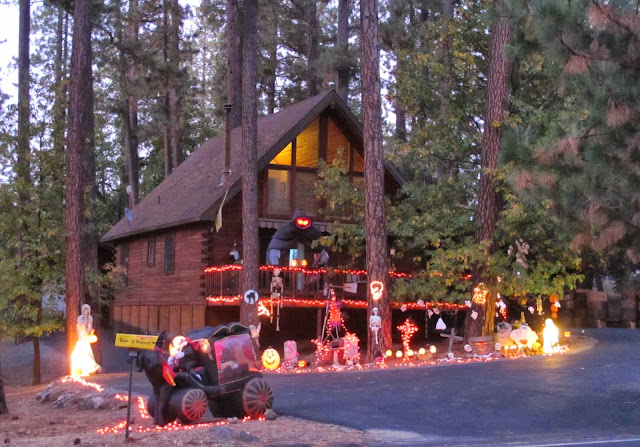