A Fine Weekend for a Wedding

As the hour approached to leave for Daughter's house on Friday, I almost thought I wouldn't make it for the wedding. I'd managed to avoid catching the cold Son had during our French adventure, but our closed-in "premium economy" cabin on the plane home had a cougher -- at least one -- nonstop for 11 hours or whatever it was. I know the poor guy was suffering more than the rest of us, but at the same time wondered whether his germs were permeating everything and everyone in the cabin.

My throat started tickling early in the week with the cough.  Not as severe as the guy's on the plane, but enough to make me feel crummy, even with all the good gremlin action in finding lost items for me. But Daughter wouldn't let me wallow. In fact, she had a new plan. Granddaughter is downsizing to a new apartment and Daughter is buying some of GD's furniture. That meant we'd take my truck -- the one she's been using for a few months now -- from her house in Fresno to . . .

It started getting more complicated at this point than is worth explaining. I headed for her house -- in my car. It should be a straightforward trip, but I got lost twice. There's freeway construction disrupting the interchange for catching the 99 south from Merced. If you follow the detour signs (as instructed on one sign), you could drive in circles for the duration.

Then there is the strange redirection of roads to get off the freeway properly to arrive at Daughter's house. I got near but oh-so-far before I called her to try to untangle me. I had my Garmin with me, but I've never cranked it up to use it, so that was no help. How do you answer the question "Where are you?" when you are lost?

We're not in a rush to leave from Daughter's on Saturday. We walk a few blocks to a Mexican restaurant she likes for breakfast. But today the sauce is very salty, too salty to eat, so we pick the solid food out of the sauce. Shortly, we're both hit with headaches. She never has headaches. Mine feels like it could go migraine. I pop an Excedrin, she uses a different OTC painkiller.

The weather is beautiful: crystal clear, warm and dry, grape fields a rich green, cotton fields picked, with little shreds of cotton littering the soil, fruit and nut trees in neat rows. I see new beauty in the rich agriculture of California's Great Central Valley, beauty I never appreciated as a kid, or probably not even as a younger adult. Does it take growing older to appreciate the fecund earth?


We head up the over the mountains -- in the truck now -- on freeways with three lanes in each direction. We called it the Grapevine when I was a kid, a steep, winding two lane road that  boiled many a radiator. It took many hours to snake your way over it. In its next iteration, we sometimes called it the Ridge Route, though stuck for a long time with Grapevine. I still call it the Ridge Route. It's I-5, though I don't know whether that's its "name." More lanes are under construction. It's always under construction. 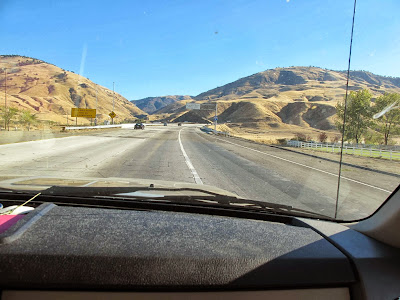 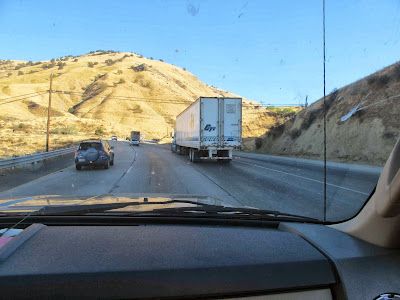 We arrive at Granddaughter's and her Boy Friend's  apartment in a beach community on the coast in LA, not long before the sun sets over the bay. I take a picture from their sun deck. Then I take a picture of Daughter, the Boy Friend and Granddaughter. 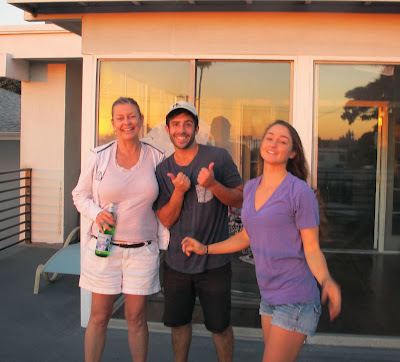 He's a photographer, so he uses some kind of settings trick that captures the sunset and also lights up us ladies. 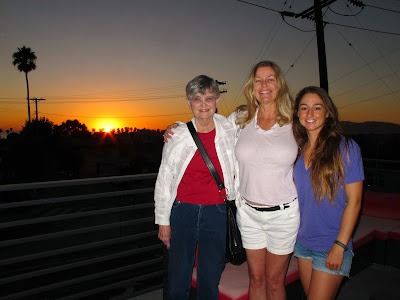 Daughter and I sleep on the enclosed porch with windows all around looking out on the sun deck.

We walk down a hill to a café to have coffee and chocolate croissants (pain au chocolate), then return to the apartment to dress for the wedding and head for San Diego.

Eventually, even chocolate croissants wear off and we stop at a restaurant on the beach for lunch. Before I can whip my camera out for a shot of the surfers outside, people take a seat at the window and have the server pull down the blinds. (Rats! We chose non-window seats so we can have a view without sitting in the sun.) So click on this photo to get a peek at surfers in the ocean. 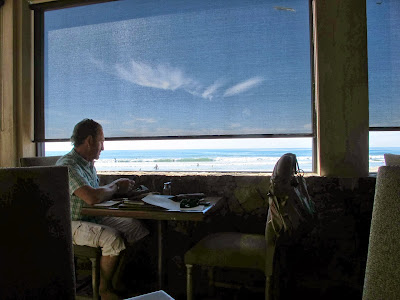 And a sea gull at the next window wonders whether things are better on the inside. 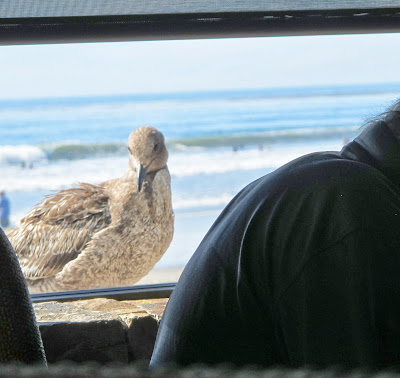 This is not exactly what I ordered, but they made these crab cakes especially for me, even though they are not served on Sundays. They are splendid. 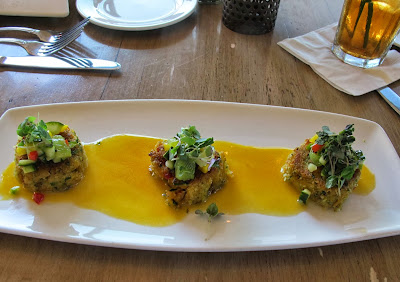 We make our way into the wedding venue using the GPS in Daughter's smartphone. The wedding party is gathering when we arrive, and the Groom comes to greet Daughter, another Auntie and me. 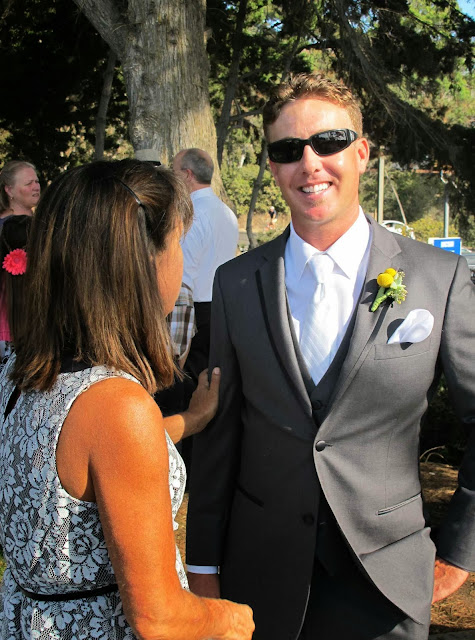 Here are the shoes for the male members of the wedding party . . . very cool with the silver-grey suits. (Daughter tells me these are boat shoes, which figures since working on boats and at sea are the groom's family business.) 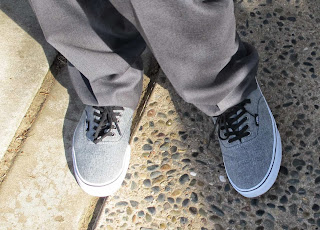 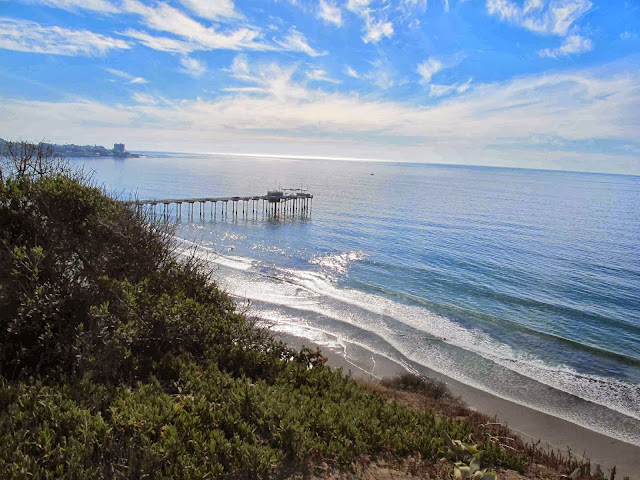 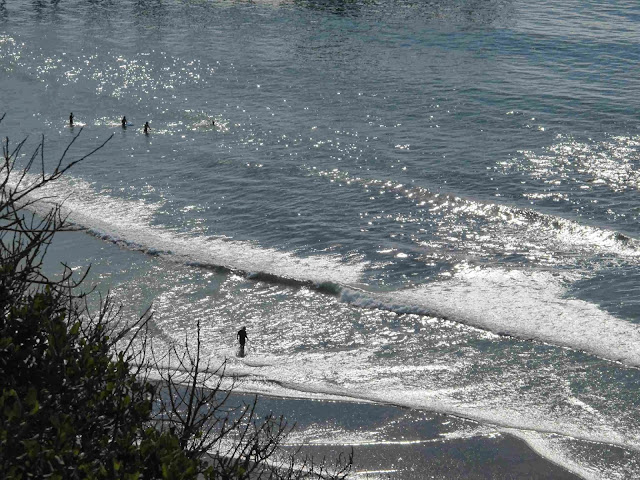 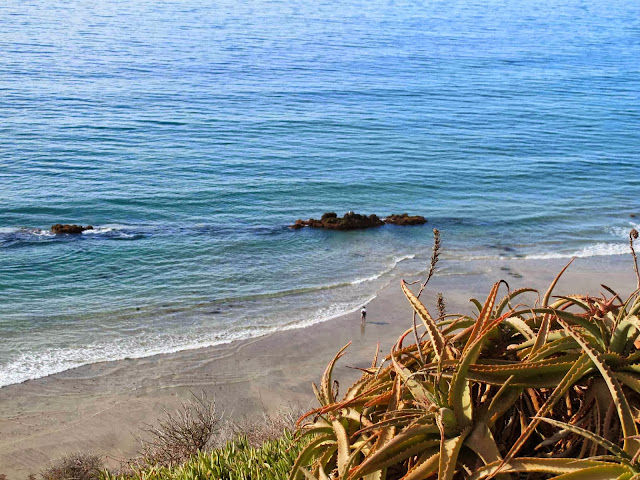 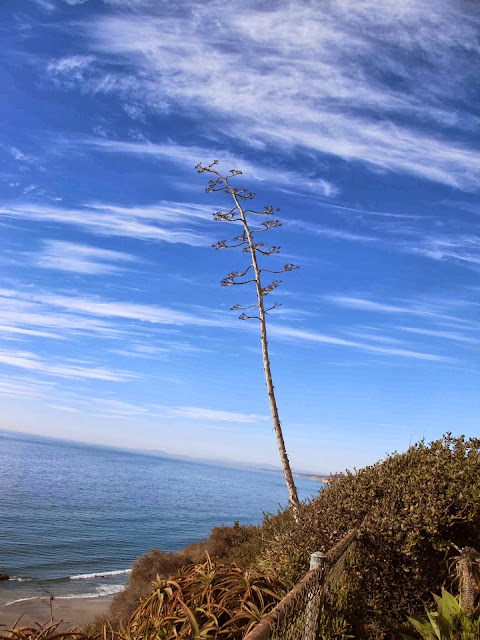 The ceremony begins with an announcement from the presider that the wedding couple has hired a very fine photographer, so we can all put our cameras away. I sneak this picture, but I don't want to be the Granny who is thrown out of the event or off the cliff. 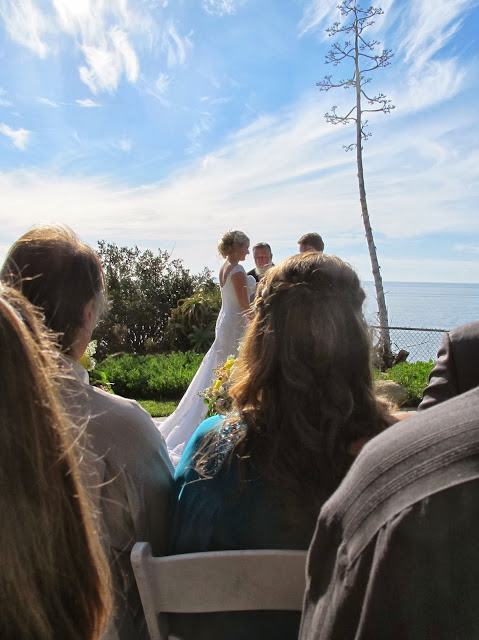 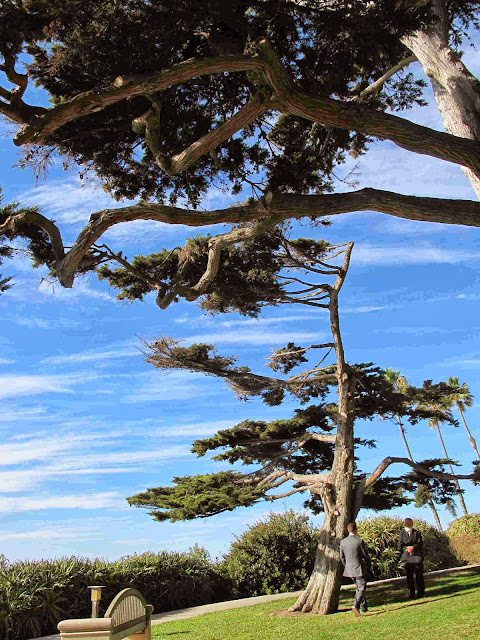 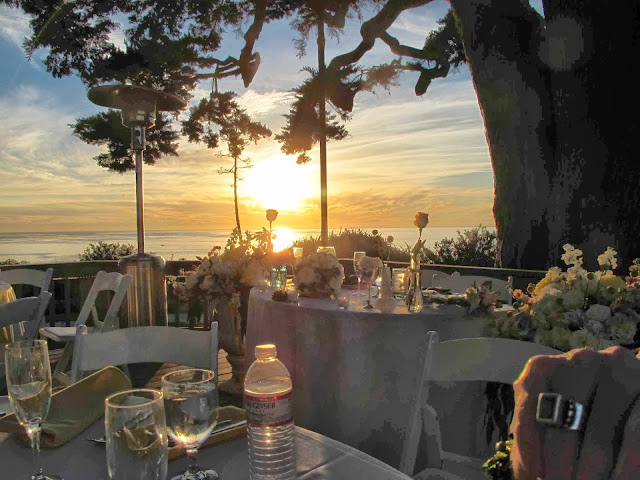 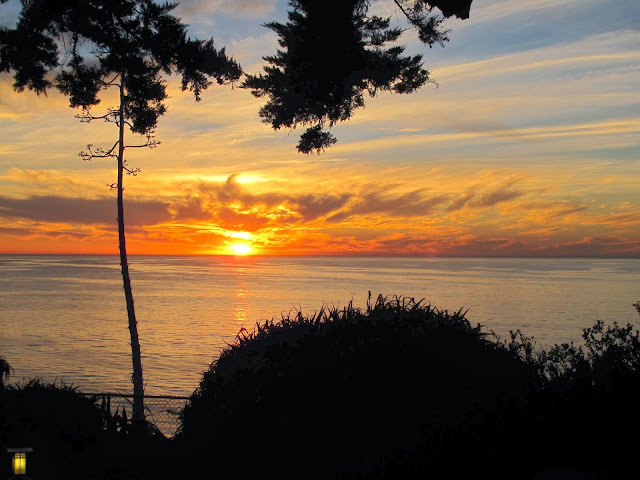 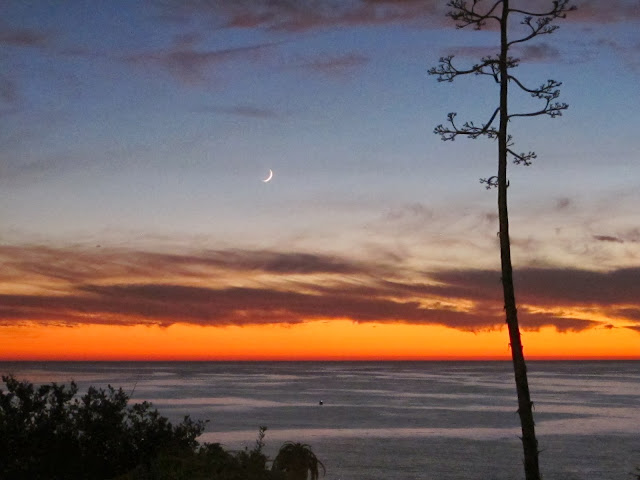 After dining and dancing and having a good old time, Daughter and I head back to Granddaugher's apartment in LA again. Since Daughter has to take an early flight out of Los Angeles Airport to get to a meeting in San Francisco, I'll drive the truck back to Fresno, and Granddaughter and the Boy Friend must go to work in the morning. I propose a change of plans from taking the furniture we are acquiring from Granddaughter back with me. We'll put our dibs on the pieces we want, then Daughter can take the truck back another weekend when a crew can be arranged to load the furniture, and another one arranged to unload at my house . . . and hers. I'm taking a couch that can be opened into a bed, and a pair of dressers. Daughter is taking a daybed.

If we'd figured out that plan ahead of time, we could have traveled by car instead of truck!

Daughter sneaks out early to the airport. The kids go off to work. I wait until enough of the neighbors have gone to work so I can bring the truck near enough to the apartment to load my suitcase and sleeping bag and pillows without toting them up the hill. I play with Garmin, trying to set it to take me to Fresno. It works okay, but after a stop for gas and lunch, I turn the wrong direction on the freeway and take many miles of traffic and construction to get back where I started. I did make it to Daughter's house without getting lost, and swap vehicles into my own car.

Between Garmin trying to take me home by a totally nutty route and getting through that freeway construction in Merced, I saw a lot of new countryside while searching for my familiar road home.

Another beautiful evening at the end of a perfect weekend . . . I stop for a picture of the sunset's reflection in Dawson Lake. 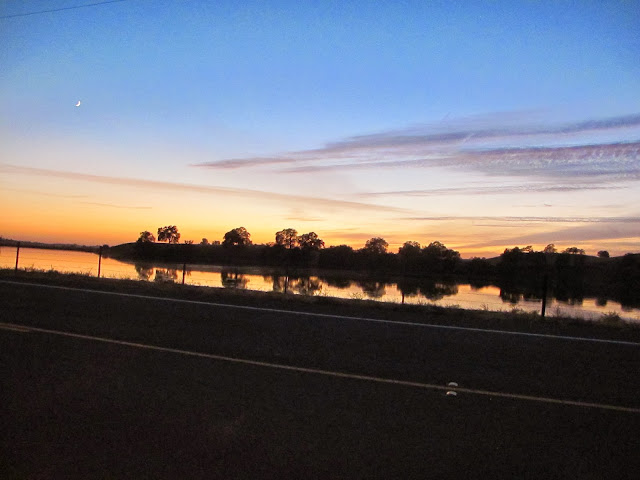