A look-back at the beginning of this trip to France

This should never be a surprise. A strike is to the French like apple pie is to Americans. But since I hadn't been paying attention, it was a surprise. And especially since I didn't learn until after it all that Son's and my travel plans had probably been at least marginally affected by it.

Attention had been, for the most part on the Rim Fire and the gradual lowering of the threat level. It has a way of hanging on to your attention. Secondarily, there was packing for a quilters trip to France with Jeanne Mills Tours. My son, who'd never been to Europe, was traveling with me and twenty other ladies this trip. (To Son's Girl Friend, all the ladies love him, but he only has eyes for you.)

I was late leaving, but I finally headed for Sister's House in the City. And what did I see as I approached her suburban locale? Smoke in the air, once again. It was burning up first-day acreage more quickly than our Rim Fire had, before it had turned into California's third biggest fire. 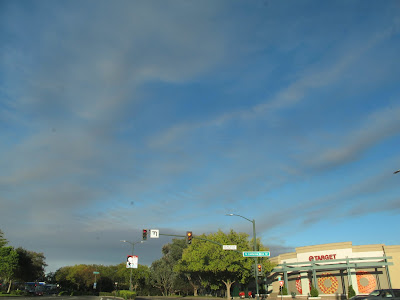 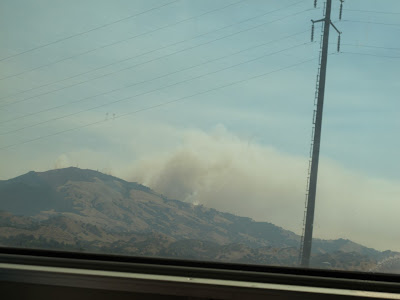 Sister prepared paella, from a recipe which claimed to be quick and easy. That wasn't exactly true, but it certainly was lovely and tasty, although she says she prefers another recipe she has used. 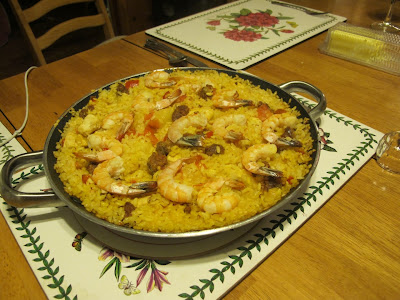 Son arrived after dinner to meet up with me for the trip to France in the morning. We head out on the BART at 11-something to San Francisco airport. (Incidentally, that is not Son and I in the picture, just fellow underground travelers.) 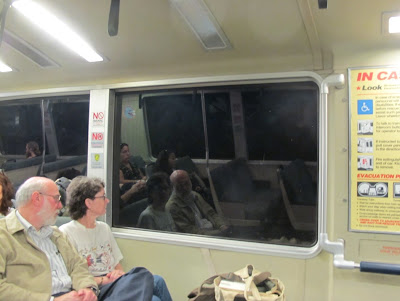 Son and I are booked on the same flight from San Francisco to Paris, but he couldn't get the same connecting flight to Nice. They tell us they can't handle changes at check-in, but we can try in Paris between flights to see what they can do. He and his luggage are scheduled to arrive in Nice about 2-1/2 hours after I do. My plan is to hang around the Nice airport until he arrives and we can take the city bus from the airport to near our hotel. 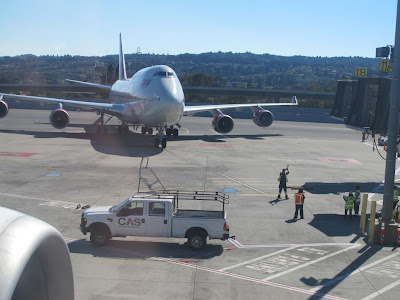 We rise up above San Francisco at around 4pm, with only a little haze and a lazy stream of fog to be seen in the air. 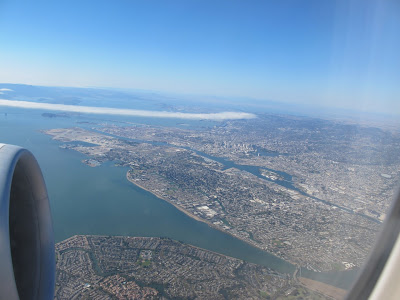 Goofy selfie of the two travelers: 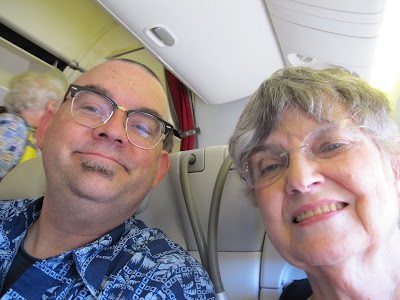 I have a window seat, my favorite, as I like to take pictures out the window.

With otherwise arid-appearing territory passing below, I love seeing these big crop circles. 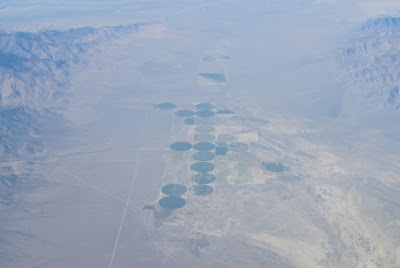 Then there is some kind of open pit mining, with the giant back pit, then numerous smaller pits in the surrounding territory . . . 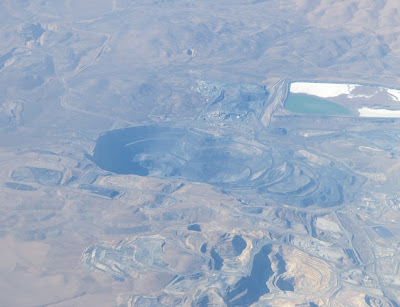 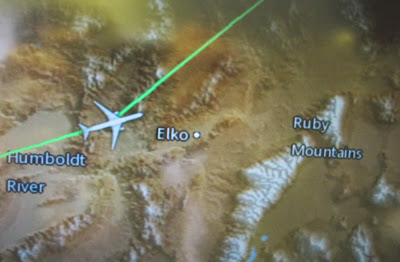 I have never seen a night of travel with such clear skies, with sharp bright stars studding the black canopy. We had only the briefest periods of turbulence during the night flight. The sun rose over a layer of haze in the morning. 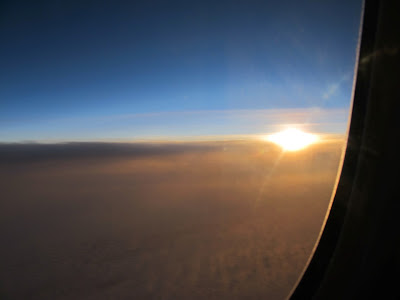 It wasn't until be began the descent into Paris that any clouds showed up, spectacular puffy giants. 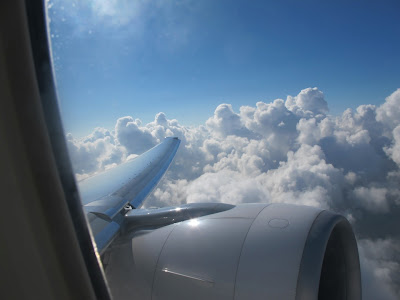 The big passenger loading ramp heads right toward us. Such personal service! 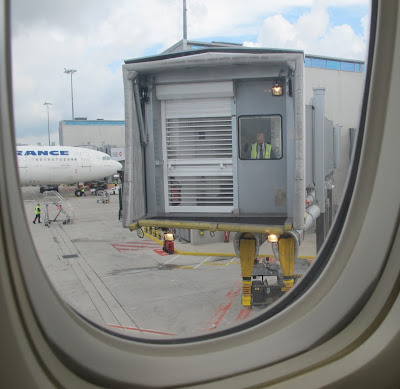 We had landed early and were unloaded with sufficient time for me to make my connection to Nice that Son's attempt to online book had judged too close to schedule. As we headed off through the international terminal toward the domestic terminal to put me on my flight, we came across the Correspondance desk, fully staffed and with no one in line. (Correspondance is not letter writers; it is the French name for connection points in transportation systems.) We stopped to see whether we could get on the same flight. We decided I would change to his flight, in case his luggage couldn't be intercepted and put on my earlier flight. The staff person even managed to get my luggage pulled to be on the flight with us. The people on that desk are real problem-solvers and have a spirit of customer service that isn't exactly rampant in France.

We settled in for our two or so hours' wait. We looked up from our snoozing or reading when everybody in our waiting section got up and moved to another section. Our gate had been changed. Then our time of departure was delayed by half an hour.

Snooze. (Remember, we really have not had any sleep for ... well, I never could calculate that in the haze, not knowing whether to add or subtract the nine hours I'd advanced my watch and camera to be on French time, in order to arrive at the absolute value of the time passed.)

Next we see our departure delayed even further. We're now out beyond our scheduled arrival time for departing. An announcement: we'll leave once an aircraft arrives back from Nice. (My original flight? How did the aircraft get so mal-positioned?) The plane arrives, everyone queues up. Arriving passengers disembark. We wait. Fueling trucks arrive. We wait. Catering trucks arrive. Cleaning people. We stand there queued up. Son and I have Sky Priority tickets. We hover near the sign for earlier boarding. I'm wanting to sit down again, but finally we are able to load.

I remember nothing of the flight, except for turns around the wavy buildings just before landing. I even missed the safety briefing!

Taking the city bus into Nice was a super idea. The bus is set up to accommodate load-bearing passengers. The luggage rested in racks, while we stood, hovering over it. A brisk walk from our bus stop to the hotel also seemed like such a good idea. You know ... we've been sitting for umpteen hours and the exercise will feel good.

It felt good for a while, until we got to the closest door of the hotel. It was closed for some kind of work. We'd need to walk to the opposite side of the building on the next street. A walk to infinity.

It was when we poked our heads into the restaurant next door to tell our Tour Leader that we'd safely arrived that I first heard mention of a strike. "I guess you got held up by the strike," she said. Two of our travelers from Los Angeles had their flight cancelled but got quickly rescheduled and arrived only a couple of hours after their original flight.

The strike had involved many sectors of the French economy, just a three hour strike -- nine to noon -- on the morning of our arrival. Just enough time for a plane to get out of position.

One lady in our party arrived a whole day late, but it seems more likely that a missed connection back in the states was more responsible than the French strikers for that one.

I never heard the outcome of the fire near Sister's home in the city.

See you soon and catch you up if I can kick this bizarre sense of jet lag. (Fast trains' ll do that to ya.)