(Not properly proof read. Corrections may be submitted in comments. Please tell me if you want spelling and grammar credit for corrections you submit.)

You've probably heard it all by now. I've just emerged from a "time-out" on posting. I read at a distance now that the Rim Fire has reached about 255,000 acres, with firefighting costs approaching $100 million. Today my computer resists linking with the Groveland Facebook page, whence comes loads of good information. So this is just a little summary from the latest word I had.

Here's an interesting graphic showing the growth of the fire, in motion. Pretty much amazing.

From the US Forest Service Law Enforcement and Investigations and Tuolumne County District Attorney, this was what they determined: The Rim Fire began when a hunter allowed an illegal fire to escape.

We may want to string him up, but I bet he's feeling plenty guilty without our piling on.

Remarkable considering the extent of the fire how few residences and other buildings were destroyed, and no one, to my knowledge died in the fire. Injuries have been chiefly to firefighters, non-life threatening, things like stepping on hot coals.

Highway 120 into Yosemite reopened last Friday at noon, and it was as if cars and trucks had been lined up at both ends of the closure, waiting to burst through. The a/c in the restaurant where I had lunch was under repair and they had a large fan and an open door. Asked whether I wanted them to close the door because of the traffic noise, I declined. "It's nice to finally hear some . . ."

Although the threat to our community is much diminished, it has moved elsewhere, threatening others, and it doesn't let us forget it either.

Sister and I started, or perhaps joined, a campaign to eat out locally. Our small town merchants will be in desperate straits this winter without that Labor Day cushion of tourism to tide them over. Sister and Brother-in-Law returned to town on a Wednesday in late August and we went out for pizza. I took a picture last time we ate there, so neglected to this time. Thursday we went out for Mexican food. The top photo is my half a compuesta. I like this healthy choice with its included greenery and fresh tomatoes. A guy at another table had the giant concoction below, which is probably 4 times the size of mine. Mine is plenty for me. 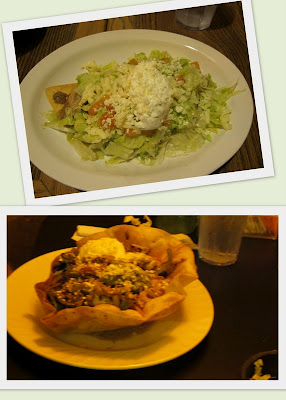 Friday night we went to the German restaurant . It serves other fare and was offering comfort food that evening, turkey and dressing and all the trappings, or meat loaf. Daughter came back to town to return the stuff she'd evacuated for the fire and joined Sister and BIL for this. We dined on the deck and I had this view. I got caught up in it and neglected to take pictures of the food. It's a recurring drama that sends everyone scrambling to Facebook for updates. Some of them are backfires and some are outbreaks that have spotted from the main fire. You can see this one's evolution from the initial plume, very tall since the view is largely obscured by the close-at-hand hill. You can see it's either diminishing or knocked down in about 10 minutes. 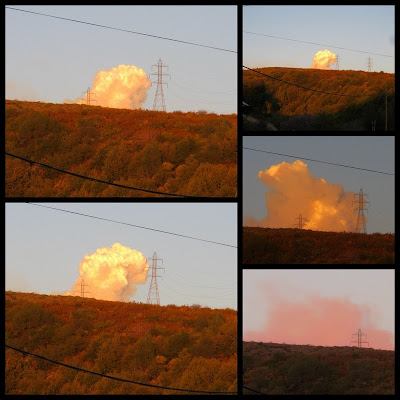 Here's a quiet sunset looking the opposite direction on the deck. Click to enlarge and you can make out Old Priest Grade dropping down the canyon below us and the main road with its string of cars coming up the main highway. 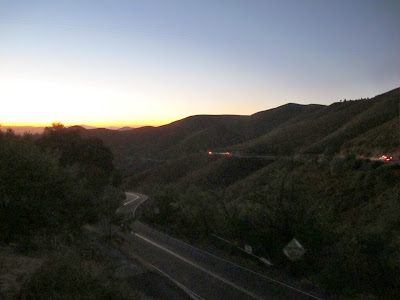 Oh, I did take a picture of dessert. We shared. Chocolate torte, or something like that. 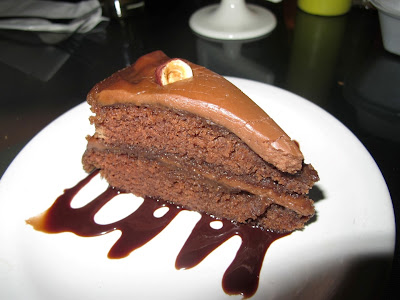 After dinner we went back to Sister's house to watch the slide show of the June trip to Provence. That was a photo tour which they copy onto a CD with pictures submitted by each participant. While Sister may look like she's asleep here, she's really looking down at her two sleeping cats. It's her excuse for not seeing me to the door when I left. 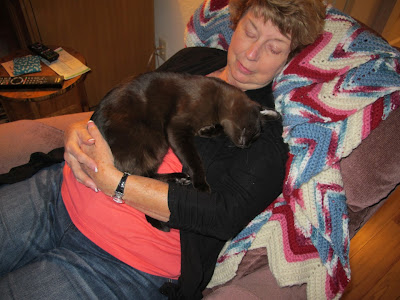 Saturday night, we went to The Grill at our country club. We sat out on the deck. Again I was facing a flare up in the fire. 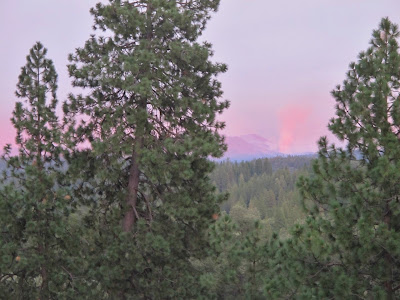 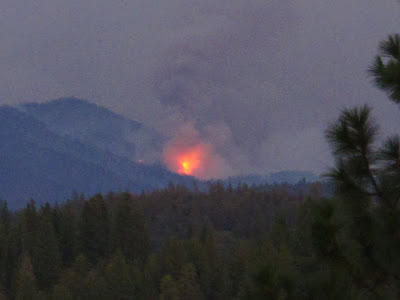 I had an appetizer, the crab cakes. Excellent and spicy (maybe that was the sauce). It's more than enough for me. Sister had the half rack of lamb on the lower part of the photo. Sorry about choosing "photo background" as the background to the photos, as rack of lamb doesn't stand out very well. 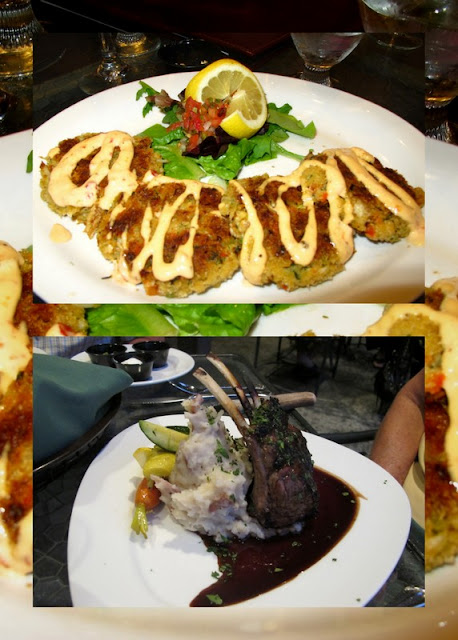 By this point in the evening, I figured this was a backfire. 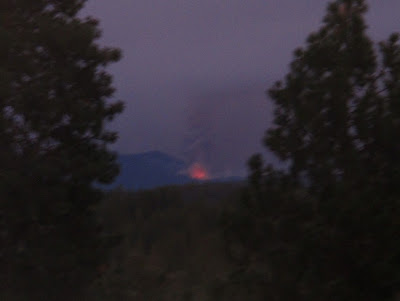 Sunday our bunch went to a BBQ fundraiser for the local historical society. Here's daughter enjoying her tri-tip et al. 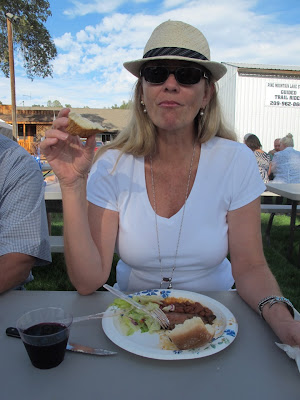 Line dancers: There's always an Arthur Murray lady (what I call people who know how to do actual dances with names and specific steps and stuff like that). 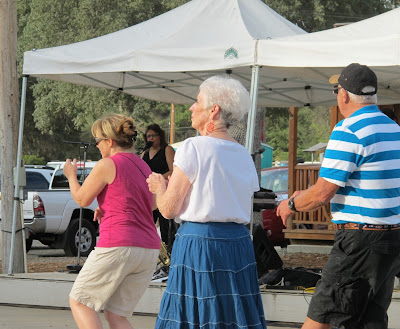 Somebody here is pooped out. Our western sky has real clouds, not all smoke like the northeast sky does. But I think fire still lends a certain color to the ensuing sunset. 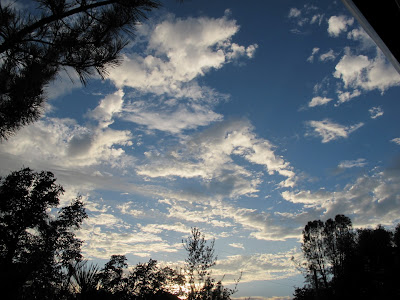 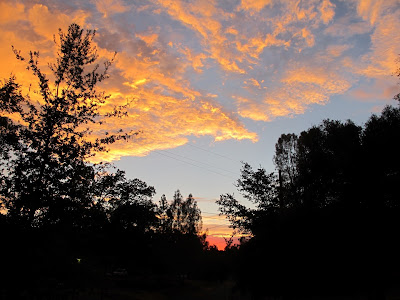 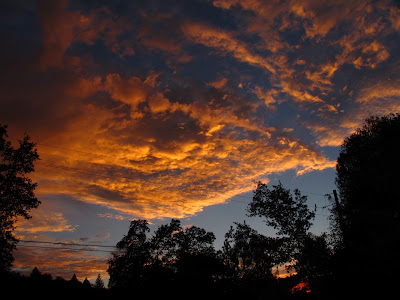 For example, sunrise is diffused by the smoke. 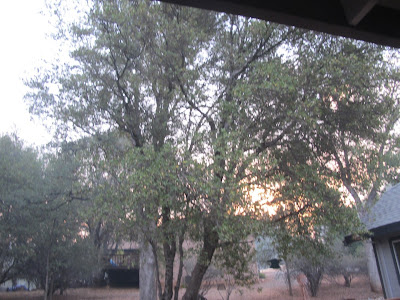 On Monday Sister and I decided we'd take a ride out to see fire damage. We'd heard one of the local roads that had been closed was open. For awhile there was no signs of fire, in places where we expected to see it. When we got to an area where burn became evident, there was a barricade in the roadway. We pulled over and began to walk toward the edge of the canyon, where we saw other people walking. We may or may not have dodged under a funny yellow tape with funny writing on it to get out there. There'd been some burning, but we were mainly tramping through moon dust. 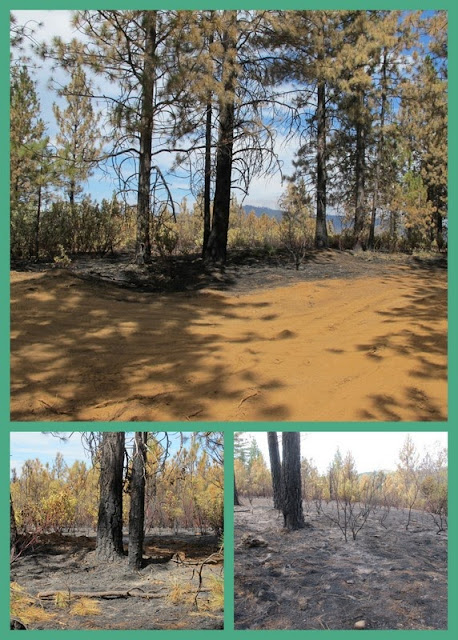 An earnest young man in a uniform came striding toward us from the roadway. Sister and I and one of the other looky lous were hailed down by the young man. (The others had disappeared down the hill.) So reports of the road being open notwithstanding, the young forestry officer ran us off. The entire national forest was in a state of closure.

We retraced our steps (er, miles) back toward home, then took a private dirt road road off along the canyon edge, very near the back units of our development, up to the airport and horsey people. Sister and I took some pictures from that area. A fire break had been cut adjacent to the road to widen the space. You can see how close to the road the fire came. 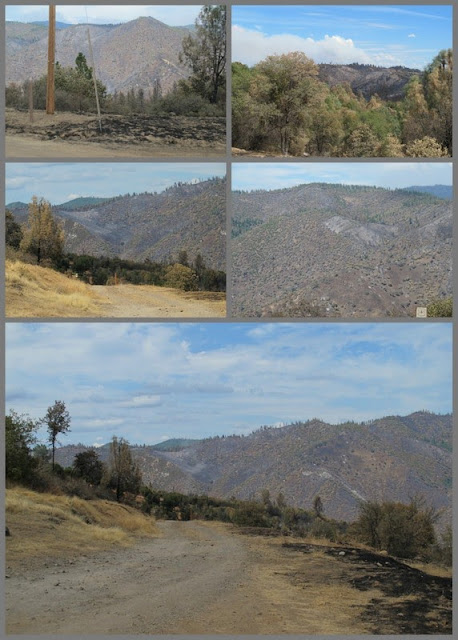 Hanging beyond the airport is the low gray layer of smoke, the tall cumulus or pyrocumulus, and the funny lenticular clouds.

The Chief Spy gave us reports from somewhere up near this windsock. 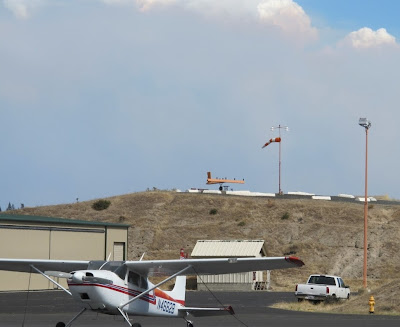 Here's a map showing day by day growth in different colors, but do watch the video linked above for a more dynamic picture of how it spread. 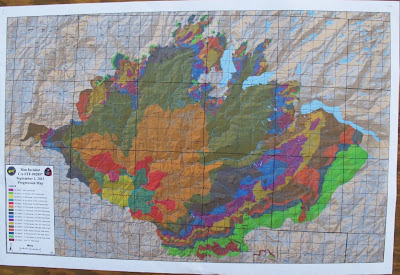 And the perimeter map overlayed on the various governing jurisdictions the fire covers. Gone is the day -- I believe -- when a fire department had to sit at the border of its own jurisdiction and watch a fire burn on the other side. What a mammoth effort involving every level of jurisdiction was involved in this effort. 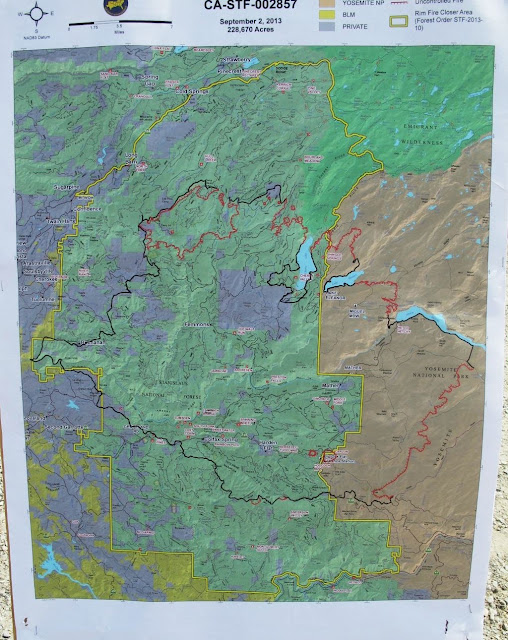 Monday, BIL, Sister and I went to a local hotel for dinner. 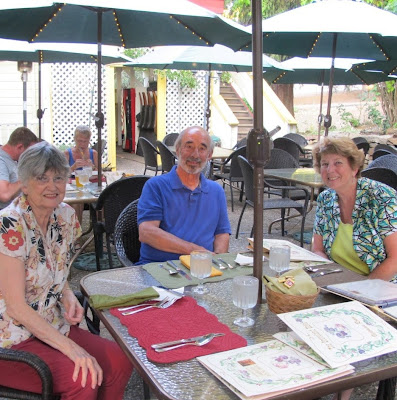 The proprietor is nursing a kitty who was hit by a car on the highway. Kitty has a feeding tube, due to a broken jaw that is wired shut, to which he has adapted quite nicely. He greeted us silently but calmly. 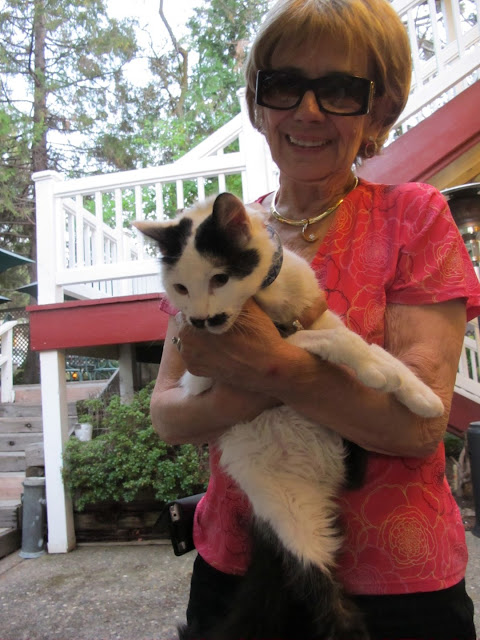 It was time to get packing.