You couldn't get a better contrast to spending several hours waiting for planes in Paris-Charles de Gaulle airport than emerging into the sparkling light and colors of Nice, Côte d'Azur, France. Or what Americans call the French Riviera.

Son had already had lengthy walks in the dark the night before, but daytime was balmy and beautiful. We walked and saw colors and corridors . . . 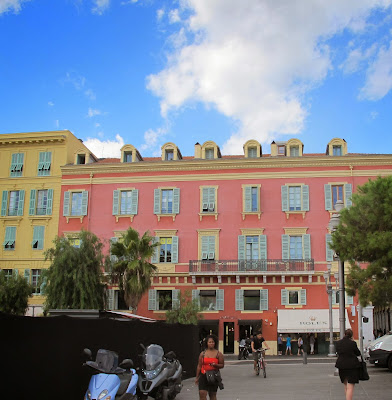 One of "ours" joins us in our stroll. 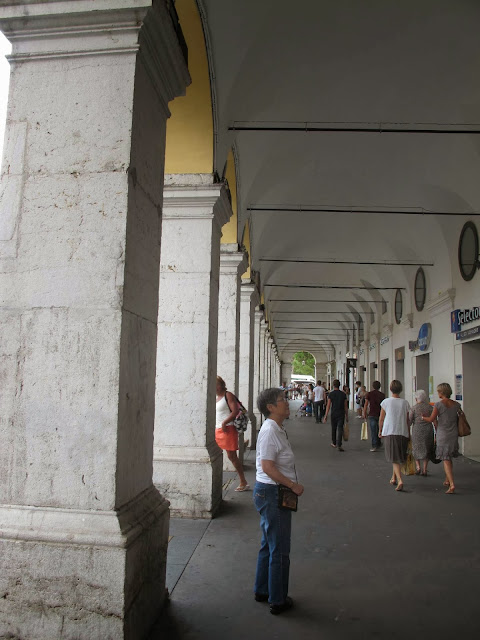 Massena Square, where the great renovation and rebuilding is still going on, as it was when I was last here five years ago, has a series of statues atop tall poles in the square. This guy bears the indignity of a pigeon on his head, obviously not for the first time. 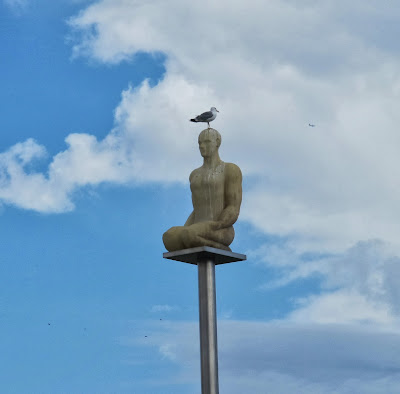 I'd read with a bit of panic just before leaving on the trip that Nice would be the home of the Francophone Games, apparently a gathering of competitors from the French-speaking nations for athletic and cultural events. I imagined Olympic-sized crowds cramming all the amenities in Nice. It's scale was not that large. I'm not sure where the actual competitions were held, but we happened across cultural displays and athletic equipment demonstrations in a tented enclave. 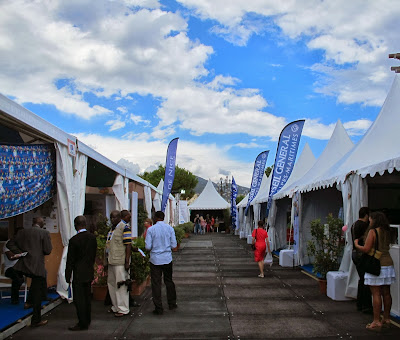 A little tot was being encouraged ever upward on a climbing wall by his watching dad and the coach. 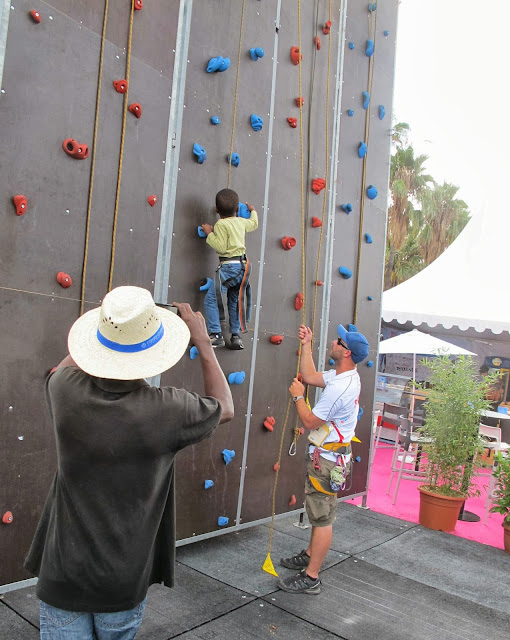 And pedestrian-friendly urban streets -- at least part of the time. 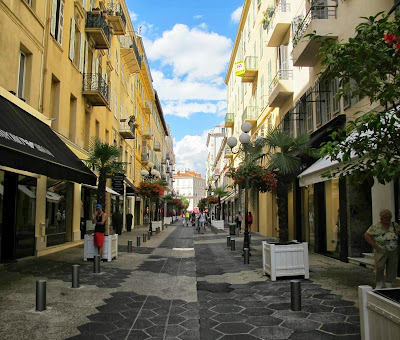 We got hungry and stop for a bite at a juice bar. The Orangina (spell-check wants to call this "or angina") was good, as usual, but the fruity little parfait fell short of its good looks in the taste department. 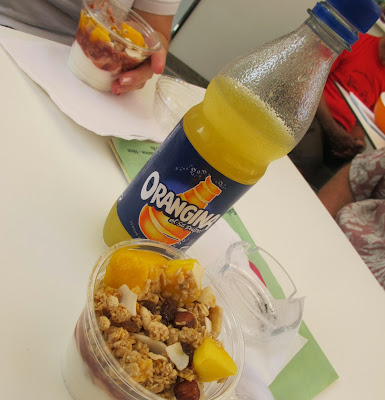 Then came the time of day when jet-lagged travelers faded to their rooms for a little rest. Yours truly fell sound asleep, forgetting completely about the scheduled late afternoon meet-and-greet get-together for the group after everyone should have arrived. I was awakened by a phone call from Son. I thought the get-together was just beginning when I raced down to the lobby to join them for snacks and wine, but it was just ending. Good impression, huh?

I introduced Son to one of my hearty perennials in Nice, Aux Deux Palmières, for dinner. After the meal, we went for another stroll through the neighborhood. The Boscolo hotel, across the street from our restaurant, presents an elegant night time view. 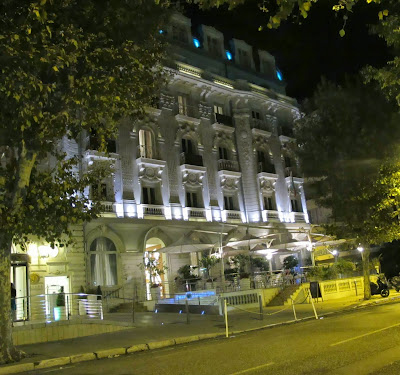 It also has a rhinoceros on its front terrace. 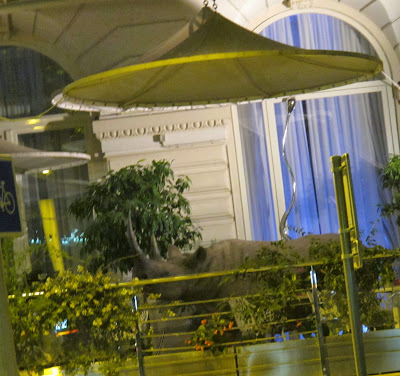 A beautiful trash truck came along. No, really. The night lighting distorts the lovely azure-blue paint job, although it makes the usual banging and crashing noises as two collection guys that ride on the back platform jump off to grab trash cans to deposit the contents in the truck.

I'm pretty sure I've blogged about Men at Work, so this process interested me. The trash collectors in my own neighborhood are no slouches, but these guys ran like an athletic competition. (Couldn't even get their pictures -- too fast!) They circled blocks and collected trash faster than Son and I were walking just down one side of those blocks. One guy sprinted half a block, sprinted back to the truck to empty the can, then returned it to its place, in perhaps the time it took us to walk a short ways to the corner. Can you tell I'm impressed? (Hello, Nice sanitation department!) 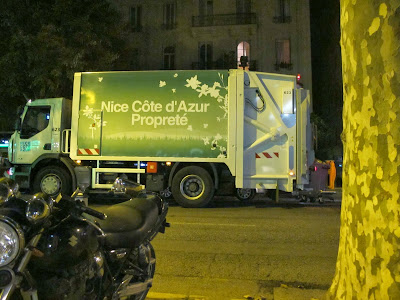 We came across a mustache store. Son's Girl Friend has a fondness for mustaches, so of course we needed to stop for pictures. 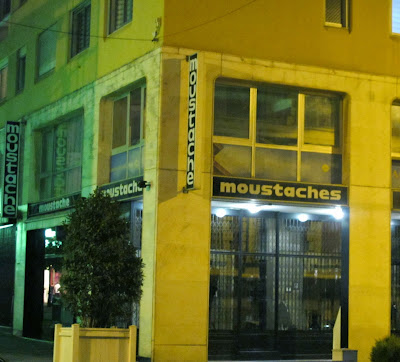 But who knew there was a market for mustaches for men AND women? 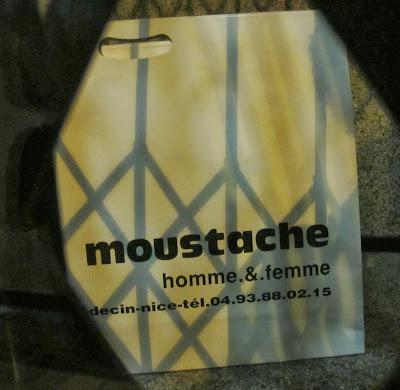 We wondered what they were selling in this bright and fancy place? 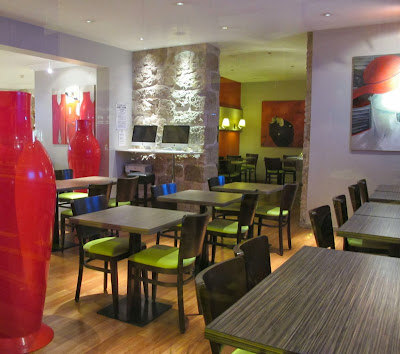 Turns out, it's a hotel, something familiar, like Best Western, although I can't guarantee that's the one.  No one was sitting around on display at that hour, but you can see the arm of someone in reception behind the counter. 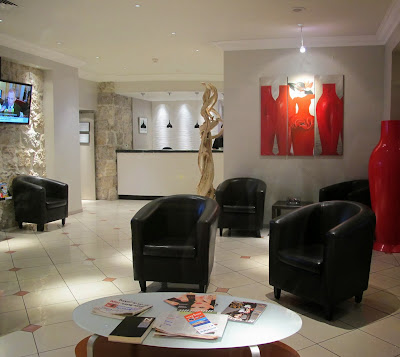 We also passed a series of fancy clothing stores. 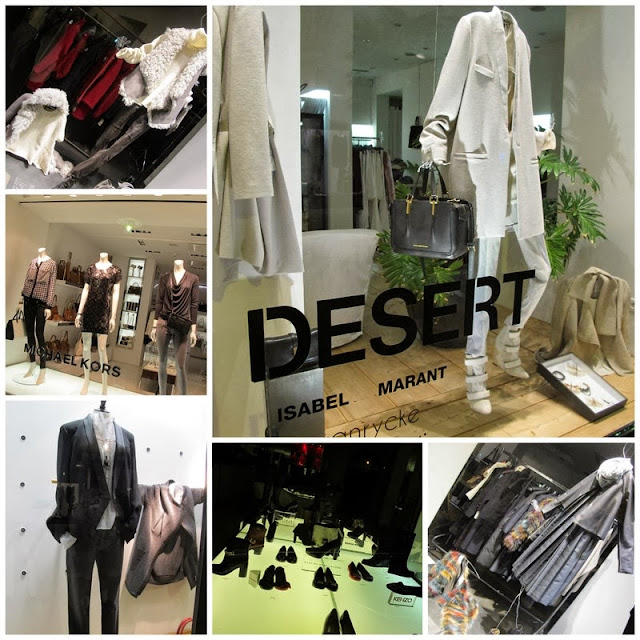 We were on a quest for pictures of something Son had seen in a window on our way into town. He'd tried earlier photos but only got reflections off the window. We both tried this night, but without any greater success. There does not seem to be any time of day when the reflections of things on the street don't overpower the items inside.

So he took me back to the hotel to resume my "nap" for the night, and went out for a power walk instead of a stroll.

A miracle . . . I finished up without falling asleep.
See you soon!