. . . but instead I'm pretty much doing nothing but tracking the fire


I'm doing:
Daughter got up at 4 a.m. to leave for work, and the realization that the whole responsibility for hearing a truck with a loudspeaker announcing evacuation, should it come to that, was mine alone. I began setting my alarm clock in 30 minute intervals, to wake up and check the websites for changes in the fire or areas to be evacuated.  When daughter left, the smoke outside was thick, and inside too. After about three rounds of this, with nothing being updated online,  I called security and determined that there'd been no change overnight, then promptly fell sound asleep. I could swear I watched the beginning of the Today Show at 7, but caller ID tells me that that's when Sister first tried to call me to make sure I was alive. But I didn't answer. I didn't answer until a much later call that woke me up.

On the must-do list, give Chloe her meds, smooshed up in cat food, and send the boys into the kitten room with their treats so they won't eat her medicated food. They're usually jumping at the door handle before she finishes and I thought I heard the jump, but when I went into the room, I saw Jean-Luc on top of a cat tree and no signs of Henley from the doorway. Until I saw a little brown paw sticking out. It appears the noise I thought was a cat rattling the door handle was really a cat knocking the clock askew. 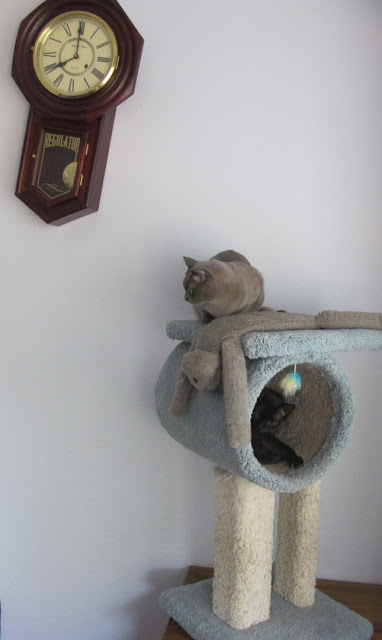 No interest in dashing madly out of the room. (What thoughts are going on behind those glassy stares?) 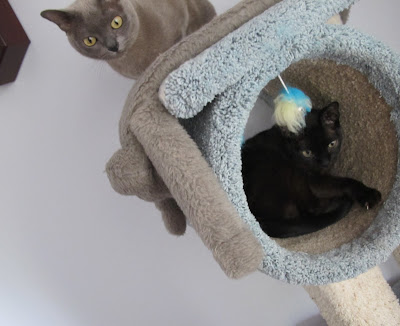 Chloe, the cause of their confinement. 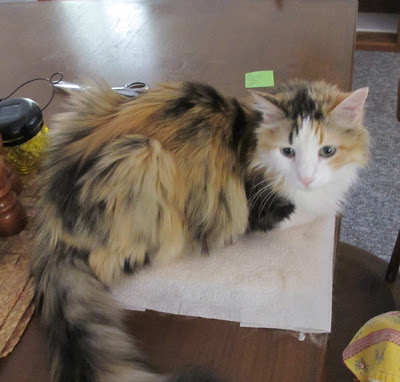 I'd become so engrossed in following the status of the fire for days that I forgot to go to the bank to deposit checks from the computer club BBQ three days earlier or go to the post office to pick up the mail for four boxes.

The bank has been undergoing a face lift. New stairs. Use ramp. 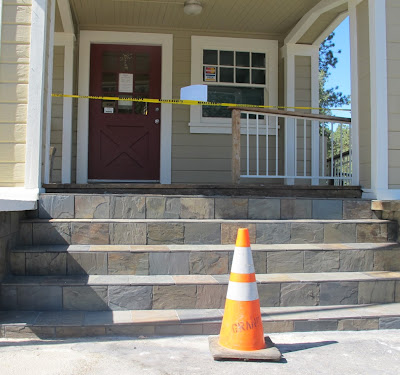 I'm getting new views of the fire's main plume. This is the view from the bank parking lot. 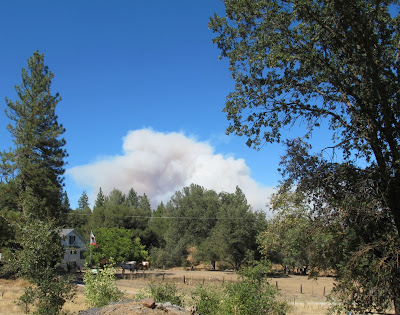 And the view from the post office parking lot. 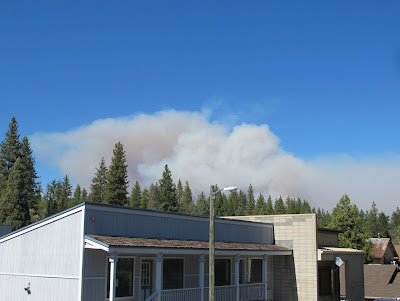 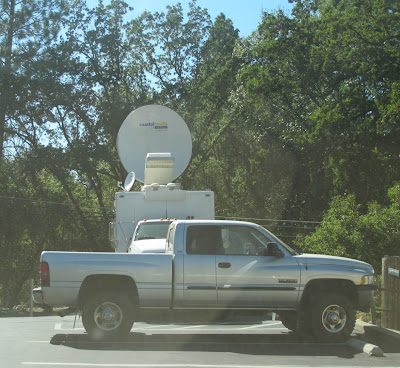 Were these motor homes on their way to Yosemite, only to be turned away by the fire, and seeking refuge under the trees behind the grocery store? 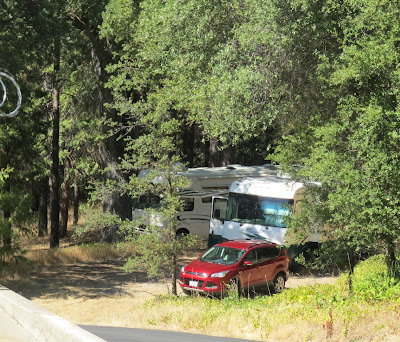 It's very quiet in town. I guess a lot of people have evacuated. I wondered how it was down at the lake. There's what looks like the leading edge of the smoke plume, although more could be ahead of it down in the canyon. 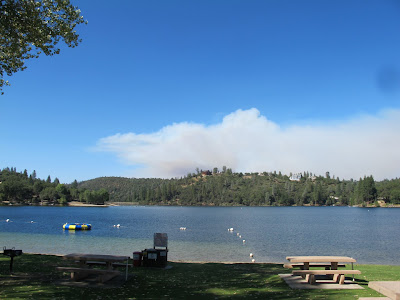 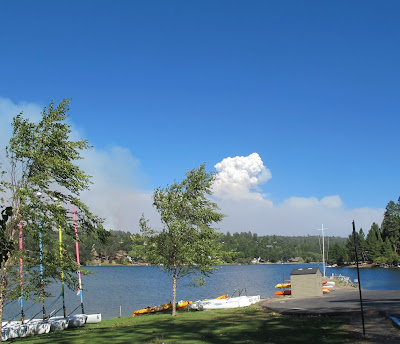 There is only a handful of people on the beach or in the rafts. 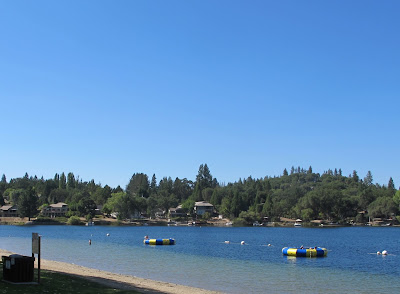 The Hobies are beached. 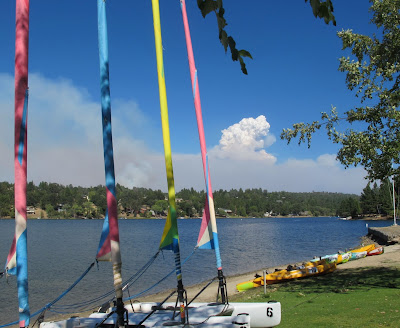 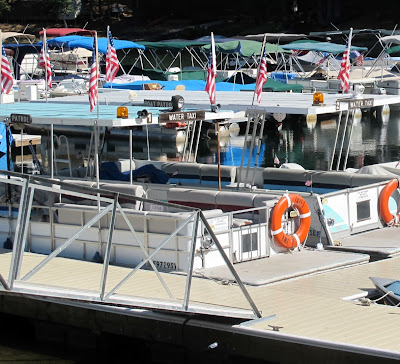 The boat patrol is silent. 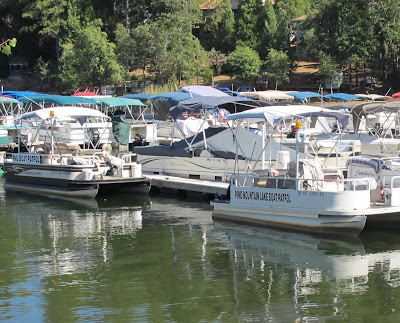 These little canoe-looking things are grounded. 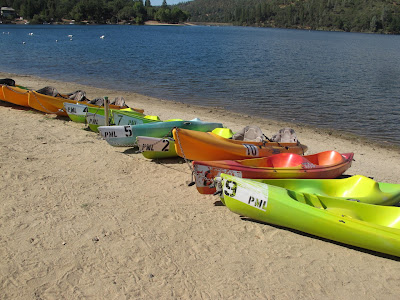 This Hobie has grown into the ground. 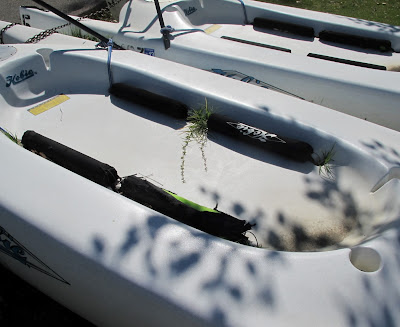 The huge houses on the hill must have an amazing (and scary) view of the plume. 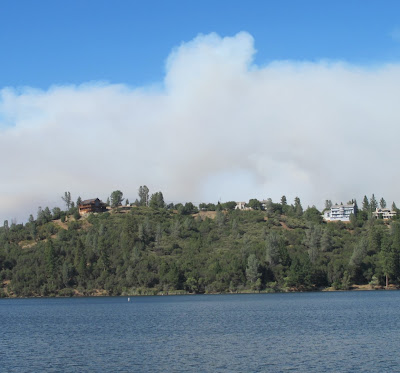 And suddenly, there's a new hot spot flaring up and I panic. It looks so close. Could it be near my house? I must get right home to my kitties, in case we need to evacuate. Even though I've been so cool all along. Even though I feel in my heart that these firefighters out there will pull us through this okay. Even though I'm afraid to say it, for fear I'll jinx it. 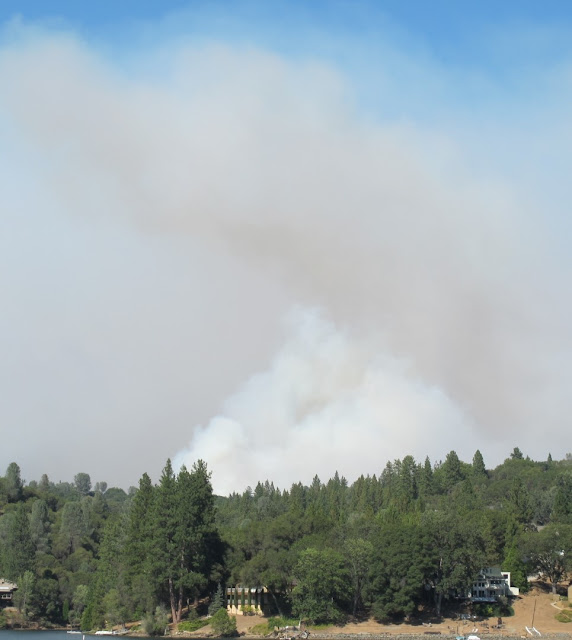 There was a community meeting tonight at the elementary school tonight to get a fire update and prognostications for the days to come. I'd originally intended to go to the meeting, but after my reaction this afternoon, I wanted to stick close to home. There was a report of the meeting on the local Facebook page and there's one little quote from it that sticks in my head.

It was asked of the Tuolumne County Sheriff's representative, local product, LT Ruckman (born and raised in Big Oak Flat) why resources were wasted to go door to door for the evacuation of units 11, 11A and 12 instead of just using the reverse 911. His answer, and I thought this was priceless, was, "I can answer that very simply. Because your life is too important to take a chance on a phone call." (Cheers from the audience)


Could I end with anything more perfect than that?

Email ThisBlogThis!Share to TwitterShare to FacebookShare to Pinterest
Labels: Fire