Sister and Brother-in-Law had been motoring around the Alps for 2½ weeks before Sister joined me and Linda C on our lavender trip, so her navigation skills, with GPS and paper map, were finely honed. Thus she's up front today, keeping track of where we are and where we're going. I'd been thrust into doing a bit of map and GPS a few days earlier, but I got tossed into the pond as we pulled out a grocery store parking lot one day, without a prior glimpse at either tool. It's hard to look at a map and get unlost when you don't know where you are in the first place. So I'm admiring her skills as we wend our way through construction diversions in Carpentras, heading out for the hilltop villages that are mega tourist destinations. 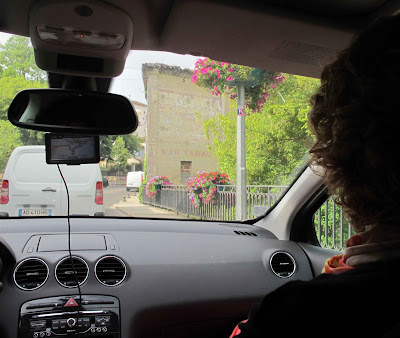 We did a fly-by of Gordes, a frequent star in movies set in Provence. We'd be back later in the day for a visit. Meanwhile, there's a well-known view point, up high enough on the winding two-lane road to this hilltop village to look it in the belly. On the proper side of the road to stop. It used to be a simple pull-out, but it's grown into a funnel for a traffic jam, as tourist buses double park and cars try to squeeze in between. It's not fun anymore, that stop, but it's obligatory. I've been there when only my immediate party was present, but not on a Friday in late June tourist season.

Everyone in both our cars headed for the small viewing area, wanting to snap that pristine view of the town, or their own solo figure with the town as a backdrop. Once upon a time -- not really that long ago -- I'd wait patiently for the clear view, but not as patiently as I tried to tell myself, silently stewing. It was last year at a crammed quilt show that I discovered the fun in taking pictures of people looking at quilts and taking pictures of quilts.

So instead of simmering, I sat back and enjoyed the giggling young people as they swarmed the view point, taking each other's pictures as they posed and scrambled scarily close the the precipice. 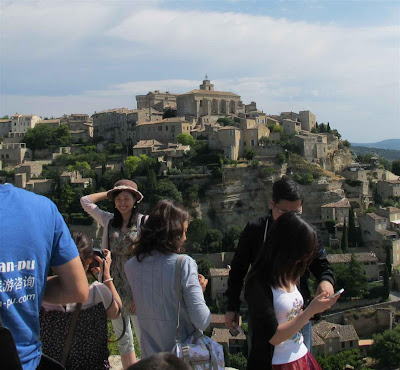 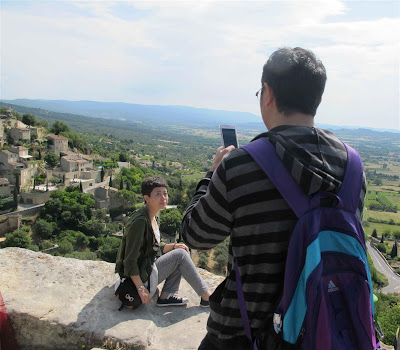 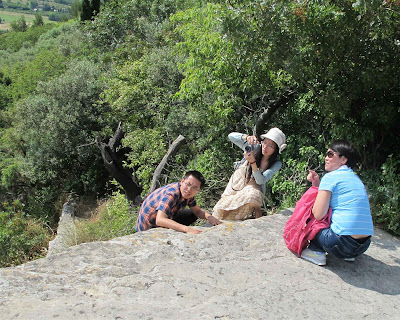 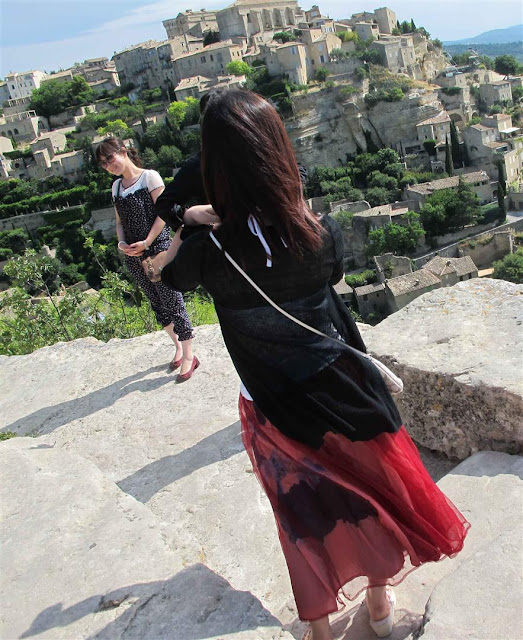 Sister finally gets a break to take Heather's picture. 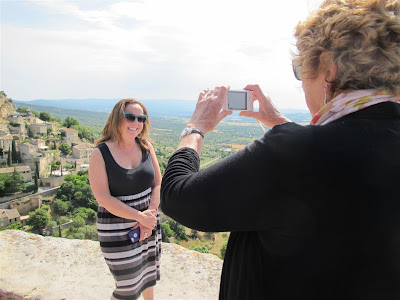 I got a picture of Sister, not really alone, but, with a slight tilt of the camera and judicious cropping, I have her picture, but, alas, not with the background of the hilltop village. 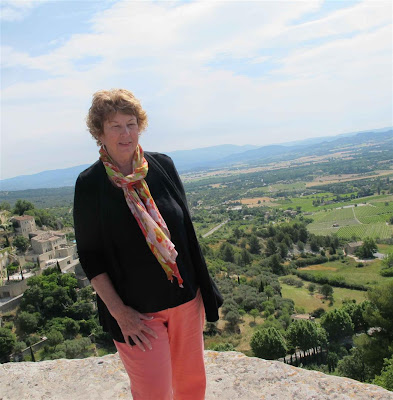 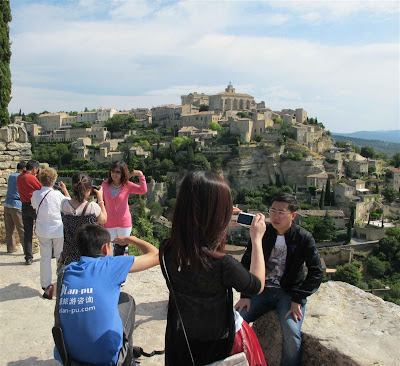 Sister walks away, a bemused smile on her face. You can see Gordes behind her from this angle. 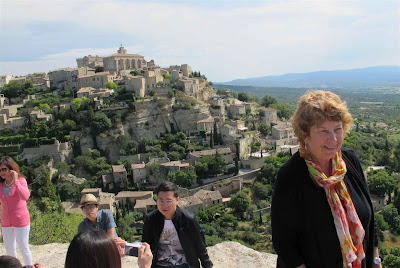 That photo shoot complete, we take a turn off the road to the top, plunging down a one-way road into a a lush canyon to Abbaye Notre-Dame de Sénanque, a Cistercian monastry which has been in this valley for over 850 years. It's crowded here, too, more buses and floods of cars. Sister invokes her special parking karma and we get a spot right next to the path to the abbey.

I take Linda down beside the abbey to see the statue of the Virgin, as she is a devout Catholic. We also visit the simple chapel, where I photograph the photographers up front. 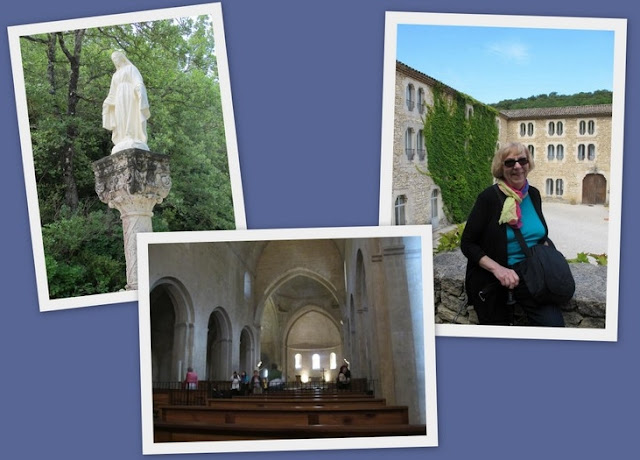 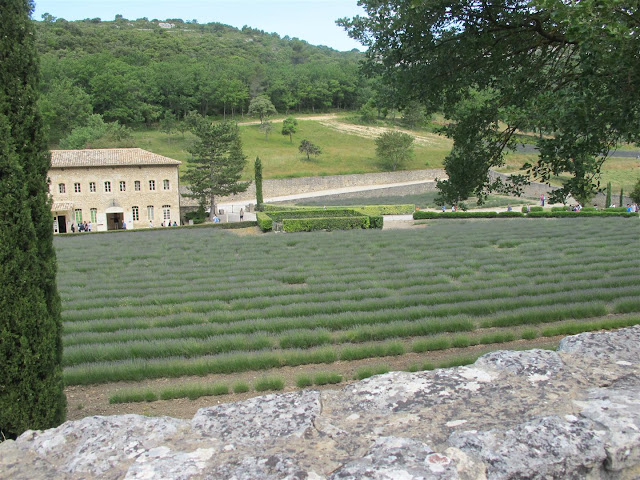 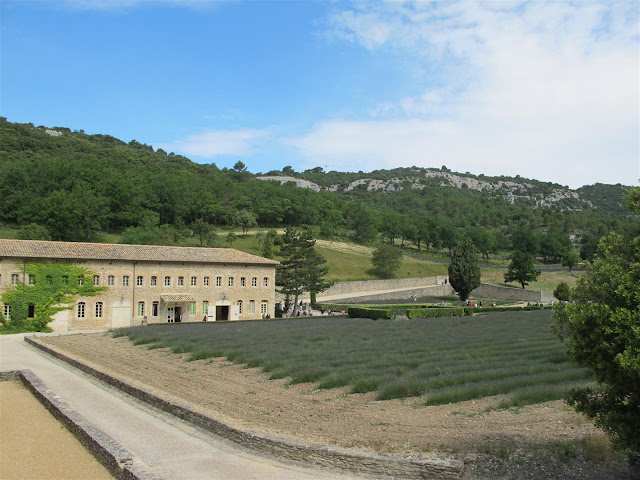 That doesn't stop the admiring throngs who want to capture the essence of it all. These ladies (and a few others) had a privileged place for painting the scene laying before them. 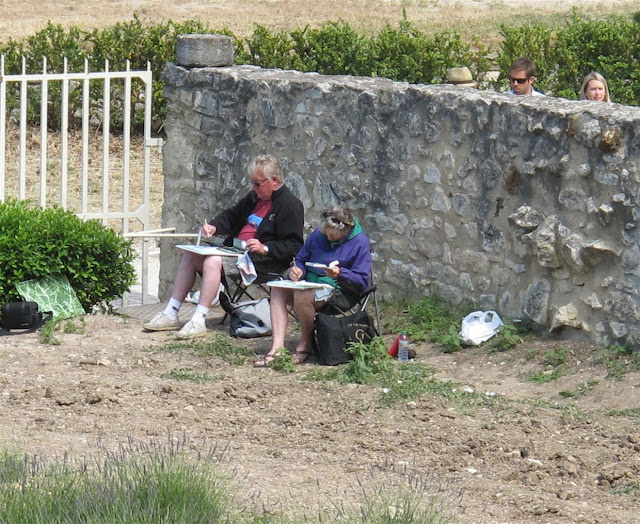 While others scramble to the top of the wall to get the good shot . . . The lady in the pink shirt had the technique for climbing and perching. She tried to teach her husband to get up too, but he was a bit of a klutz. That's Sister -- in the orange pants -- trying to reach over the wall just this side of Pink Shirt Lady  and Linda in black, who'll never see over the wall in that location. 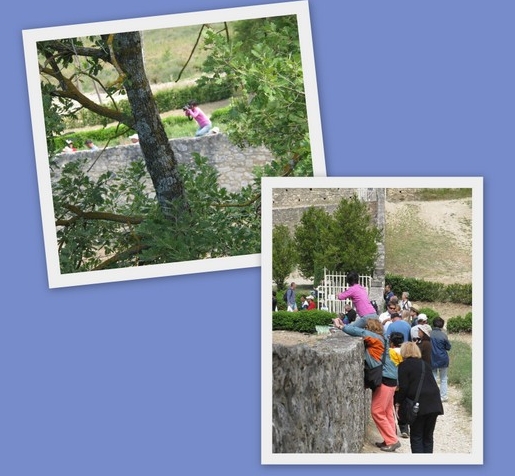 Everyone wants to get the view looking down the rows at the abbaye. 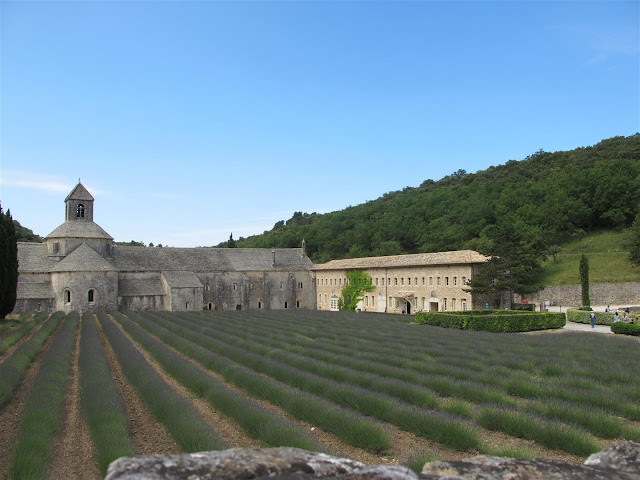 And the classic view of the young woman crouching down in the field. 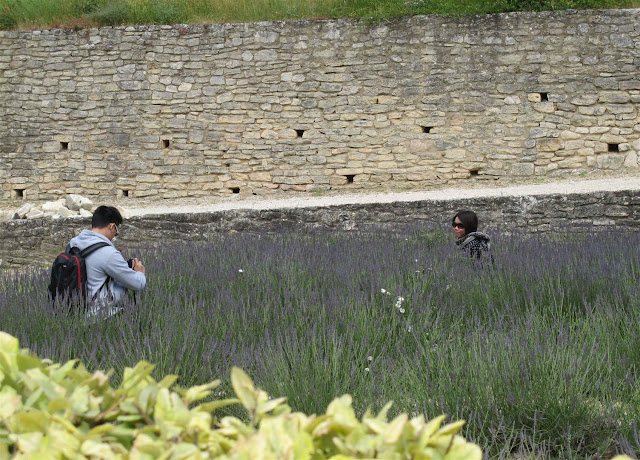 We leave Sénanque, headed for Roussillon, another well-known hilltop village, where we'll have lunch. When we sweep around a corner through a small village en route, we come upon fields of gold festooning the the hills as far as we can see. Mustard, many of our Americans think, but it's colza. It's also known as rapeseed and I knew it is used to make canola oil. It's related to mustard, so it's not surprising we're confused.  But I've just learned that before it was used as a food oil, it has been used on an industrial basis. That makes sense, because for an olive-oil kind of country, it would seem there'd be a glut of canola oil, what with the vast fields of colza under cultivation in France.

Before I'd even untangled myself from back-seat-center, Beth was sitting in the field. It wasn't long before Lisa and Heather were taking her picture. And then there was me, their taking pictures.

I'm going to jump ahead of our next hilltop visit to Roussillon to a serendipitous stop that fits in with the shooting people theme I'm on here. Besides, this is the Lavender Tour.

Around another corner, as we dip into a valley, we come across a lavender field that stretches up and down the valley on either side of the road. 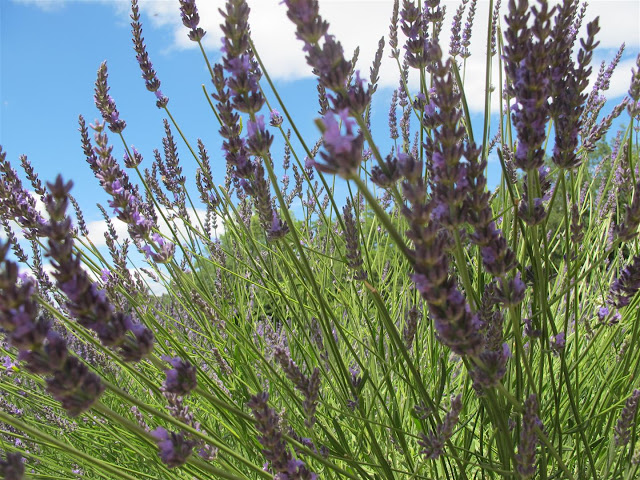 Down the valley . . . (photographers) 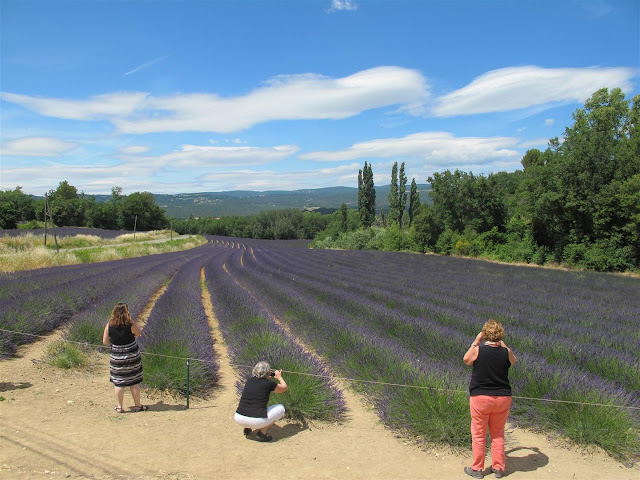 Looking up the valley . . . (photographer) 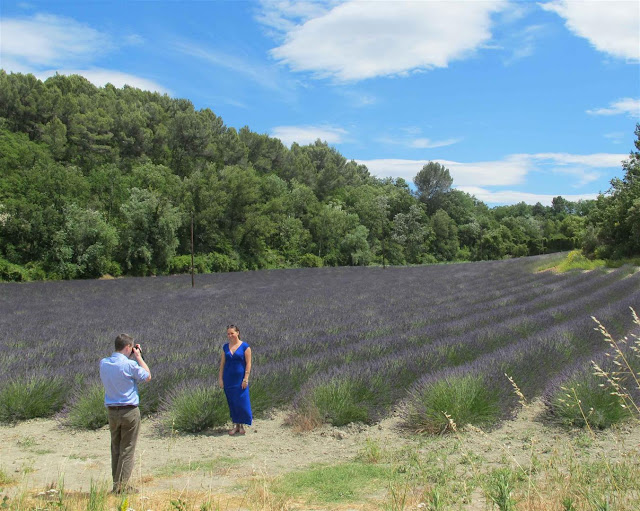 Beth, trying to get the best angle on the lavender . . . 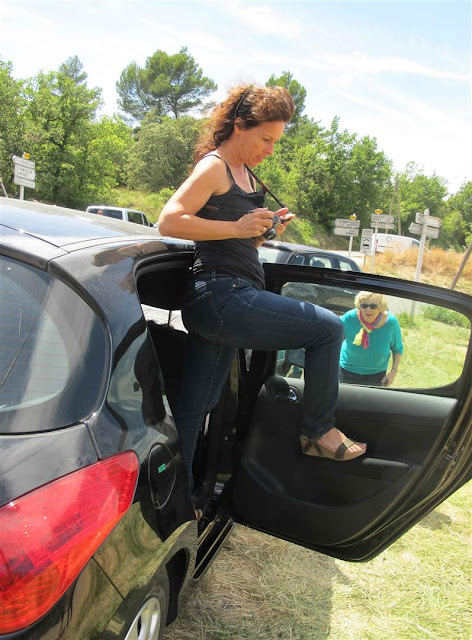 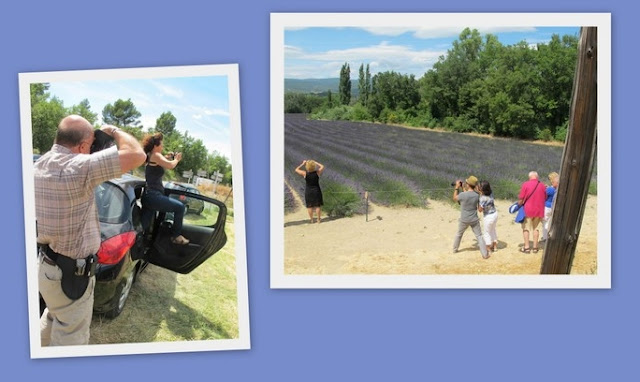 I love this field, the way it flows down the valley like a river, unlike the more traditionally organized crop fields. There. I just put my finger on what so charmed me about it.

Just so you'll know I was really at the lavender field, this one's a selfie . . . 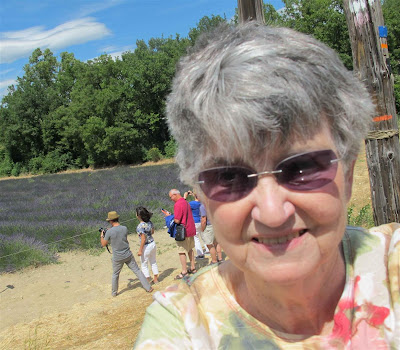