I had such a good opportunity to start this at a reasonable hour of the evening. Daughter went to bed early . . . she has to get up at four a.m. to get to work in the morning. She will be taking my photos and art work and quilts with her, to keep them out of the path of the fire. If a mandatory evacuation order comes out, I will go to her house with my kitties, a small bag of clothes, all my pill bottles tossed in a huge box (kidding just a little), cords for all my electronic equipment, and my passport. Our vehicles are packed. All we need are the live creatures and to yank out the few last cords charging phones and computers.

A goodly number of our local residents have evacuated. We got something like a level 2 notice re evacuation this evening, meaning essentially that the next one is for real . . . time to leave for sure. Although they seem to be required to advise us that they cannot make us leave against our wills.

Daughter would have left by now. I made my parents who were quite elderly at the time leave when a fire was at the door. So why am I dragging my heels? I guess I'm more annoyed by the thought of evacuating and then not having needed to, than waiting until I know I need to. I finally figured out that my low stress level is probably due to the mild anti-depressant I've been taking to recover from a trauma or two. And the wind is in a favorable -- for us -- direction this evening.

That can change at any time, of course. The fire tripled over Wednesday night. Tonight we are at 63,633 acres burned.

But I didn't get started early, because I was doing a long perusal of the most up-to-date fire information before going to bed.

Here goes my first try at embedding a video. It was taken, I believe on Tuesday, by Camp Tuolumne Trails, a camp for children with special needs. The camp was built by a generous family  with a lot of community support on a woodsy spread of land overlooking a canyon. The fire was burning at the outskirts of the camp property when this happenened. Turn up the sound to hear the dialogue. 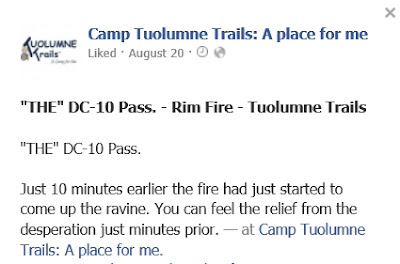 Sister and Brother-in-Law arrived at San Francisco airport after a long flight from London on Tuesday afternoon, anxious to get up here to the mountains to evacuate two treasured sports cars and some family paintings. Their flight arrived on time but the baggage carrousel wasn't in a cooperative mood and passengers from several flights were delayed for two hours waiting for luggage to be disgorged onto the conveyor belt.

Sister phoned me as they got on the BART train for the 1¼ hour trip from the airport to their city abode. They'd leave for the mountain residence as soon as possible. Hours later they arrived, lots of hours. The BART had been almost "home" when it had to be stopped for a medical emergency, for another hour's wait. Sister and BIL were jet-lagged and exhausted, but still evacuated one of their cars that evening after they arrived up here. Today they came over to pick up their vacation mail and leave off a large cat carrier that Jean-Luc and Henley can share.

After their departure, daughter and I went on a drive-about, taking pictures of smoke and talking with a fireman from far out of town. Darn . . . I didn't take pictures of the varieties of fire rigs that are flowing into town from all over the state, if not the country, and spreading out through our development.

These were taken in the area of our airport and stables/horse people. (I just wondered at the logic of that combo.) 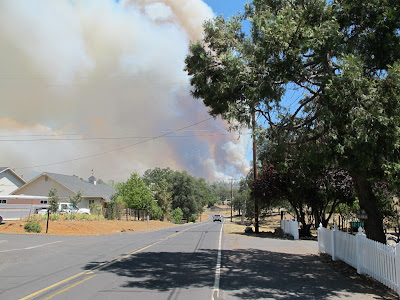 This is a little closer out to the edge of the canyon. This smoke may possibly be even another ridge over. All of these areas are under mandatory evacuation tonight. 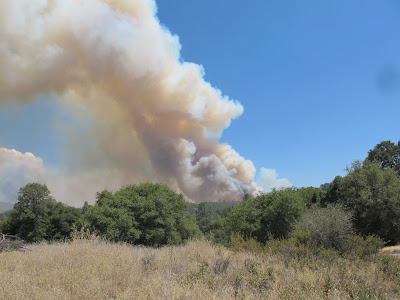 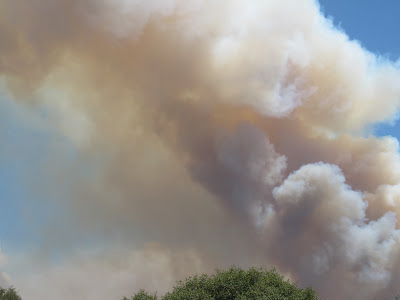 The photos above were taken in the early afternoon. This one below was taken in the late afternoon, looking straight up the road from my house. It's hard knowing directions on all these twisty streets, but I'd guess this is ENE of us. The winds were coming from the south, so it has moved farther northward. If it keeps going that way, we're good. In my own narrow little focus, I haven't looked at a map to see what it's heading towards. But it's one big MF for whomever it is downwind of it and we can only hope that the fabulous air and ground firefighters that are streaming in will be able to knock it down. 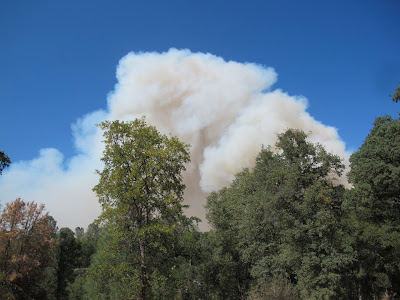 We'll see what we shall see as to how soon I'll be able to post again. If I'm still at home tomorrow, I'll try to do it then. If I'm evacuated, my internet access might be iffy.