The the Rim Fire began Saturday, August 17. Within the first couple of days, the highway to Yosemite was closed east of here as the fire crossed over. This route into Yosemite Valley remains closed, but alternate routes in are available, and encroachments of the fire into the National Park have not affected services in the Valley.

This sign has been posted at the entrance to our development since the advisory warnings to evacuate were declared. 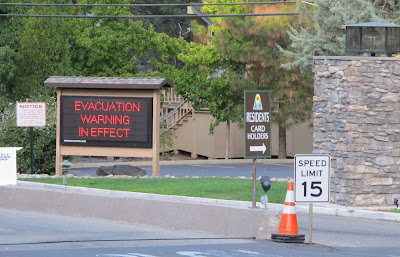 Early this evening, we who've followed every acre of this fire via Facebook read:


Evacuation Advisories Lifted for Pine Mountain Lake and Buck Meadows
Release for Saturday, August 24, 2013/Time: 2:00 PM
Evacuated residents from Highway 120 east to Buck Meadows and residents of Pine Mountain Lake, with exception of Graham Ranch Road beyond the cattle guard, will be allowed to return to their homes beginning on Saturday, August 24, 2013 at 6:00 P.M. Residents along Graham Ranch Road, beyond the cattle guard, can expect to return as soon as fire conditions allow. Only residents and those that can prove they have legitimate business in the area will be allowed in. Pacific Gas and Electric has restored electrical service to all areas of Pine Mountain Lake impacted by the Rim Fire, with the exception of residences along Graham Ranch Road beyond the cattle guard.


Our development is divided into units. Only three units, those closest to the fire, were under mandatory evacuation. The rest of us were under evacuation advisories.  If you've read my blog in the past few days, you know I didn't take the advice. Whether it's hunch, confidence or something else, I just felt like I wouldn't need to leave.

Thank you, Firefighters. (Photo from our association) 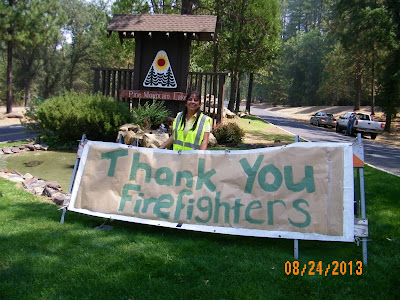 A sense that this might be wrapping up began to hang in the air perhaps a day or two ago. Always with the "unless things change" disclaimer. There was no less smoke in the air this morning than any other since it started. The sun rises as a red ball and smoke hangs in every direction like fog, only it doesn't feel good to breathe it. It was reassurances, "you'll be okay, you'll be okay," from the men in the mosaic of uniforms that led to the optimism. 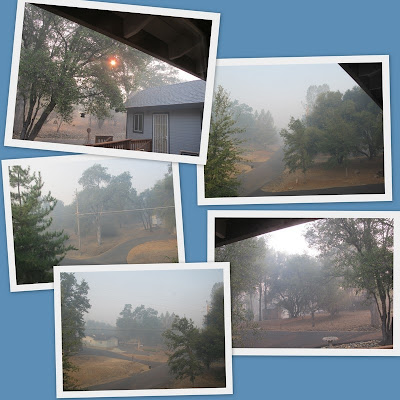 I put out food early this morning for the accumulated kittens, but there wasn't a lot left in the container and I wasn't awake enough to go out to the garage and get more. They stared reproachfully in the window until I finally got up and remedied the situation. 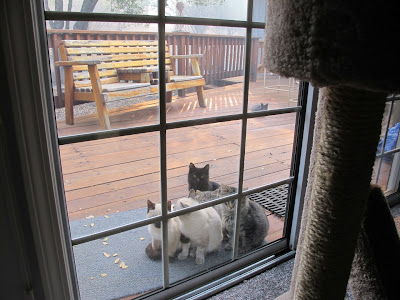 At about 1:30 I went out to check the smoke plume. Speculation was strong that the mandatory evacuation would be lifted. The chief spy at the airport reported that the power had been turned on in that unit. No smoke plume could be seen up my street! 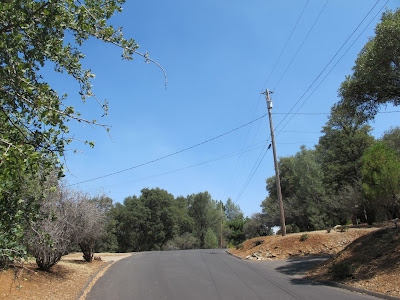 So why was I hearing aircraft flying again?

Eventually one of our Facebook reporters said there was still a hot spot out beyond the rim. Reopening the closed units might be delayed. I'd better not unpack the car yet. I went out at 6:15 to take a look. The sound of flights in the air had become alarmingly steady. It took a few steps up the street to see the plume this time. 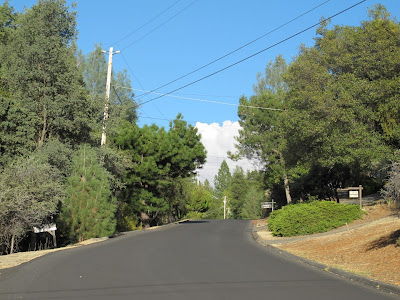 I walked farther up the street, hoping for a better view, while at the same time knowing there are trees and buildings and another hill between my street and any view out of here. This helicopter lowered steadily with its suction tube extended below, and eased down over a water tank set out to refill from. I couldn't see the tank but somewhere I'd seen pictures of them. He flew out of there lower than the tree tops. 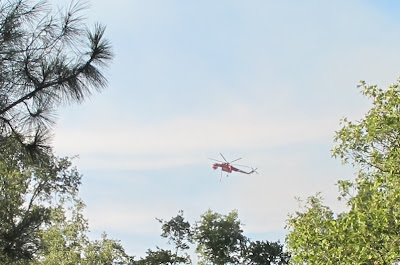 Moments later, a larger (or at least heftier-looking) helicopter dangling a bucket flew toward the fire. 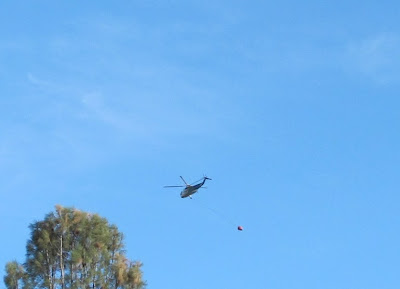 On the street corner leading into the airport, two out-of-town police cars monitored who could and couldn't access the airport. 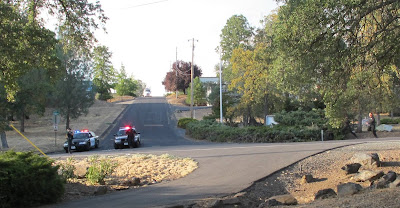 The big helicopter with the bucket heads back for a refill. I decide to head for the lake to see whether that's where he's been going, hoping to get one of those swell scooping pictures. 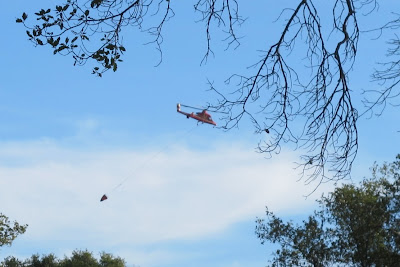 There is no one in the parking lot, no one on this beach, just this abandoned sand castle. 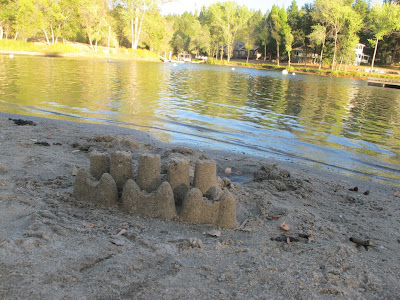 Looking at this now, are these buoys set up in an unusual manner? This doesn't seem like the usual boundary marker arrangement for the swimming area. 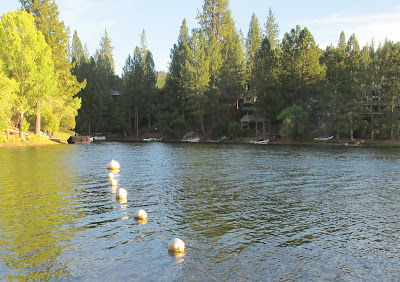 Some real clouds, not just smoke clouds, are gathering. 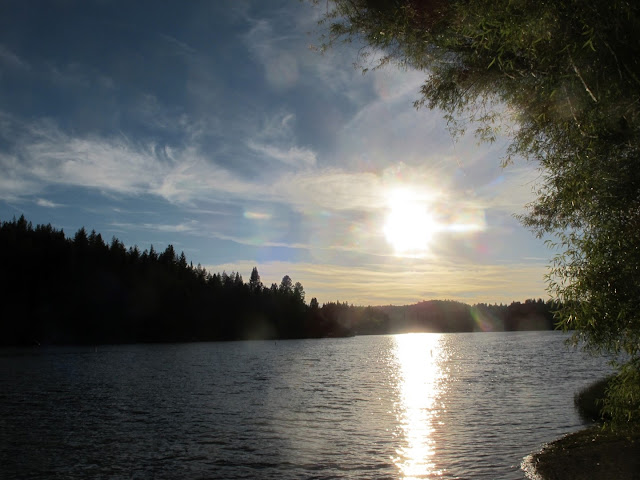 I waited awhile, but no helicopter showed up, and the sand in my sandals hurt like crazy when I tried to walk, so I headed back to the car and into town to check the mail and to see the thank you signs that were being posted around town. Fire trucks (or actually, I think this bunch was labeled Urban Search & Rescue . . . Daughter and I had seen them roll into town on Wednesday evening) had gathered in the grocery store parking lot, perhaps destined to join the string of red trucks I'd seen trickling out of town. 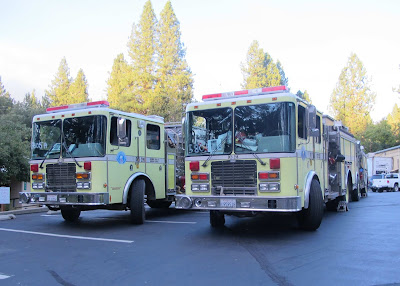 Whether they get to go home I don't know. The fire is leaving us, but it is moving on. It's at over 125,000 acres and I don't think we know yet whether today's efforts have stopped its rush toward communities down-canyon from here. Those DC-10s and other aircraft were laying down lines of protection.

I haven't smelled the smoke settle yet tonight, but I'll still close my windows for the night. It was really a very pleasant day outside, for those of us living in limbo.

Tomorrow I'll have to get back to work.  Maybe, if things don't change, even unpack the car.

Email ThisBlogThis!Share to TwitterShare to FacebookShare to Pinterest
Labels: winding down