I don't know whether Sister and Brother-in-law premeditated the weekend House Crash or whether it was spontaneous.

All during construction of the room addition -- a quilting studio and an office (or study, as we used to call them in the olden days) -- and sprucing up of the rest of the house, I began to acquire specialty furniture, almost all of it in boxes. As in parts in boxes, assembly required.

Right at the beginning I ordered the Aussie Kangaroo Kabinet sewing table. I had to jump fast on a sale, with free shipping and a free chair included. Then the adjustable cutting table came on sale. (In retrospect, I begin to wonder whether they're all always "on sale.") I don't even remember the sequence now, but there was also the Cubeical, the computer desk, the display shelves, a TV shelf for the sewing room, a better office chair when I discovered the free chair was something less than comfortable, the new bed. Oh, and I mustn't forget The Closet.

Daughter came to visit one weekend, wanting to know what she could do to help, and I asked her to help me carry the Cubeical box into the living room so I could assemble it in the biggest available open space. She not only helped carry, she proceeded to build it. Sister subsequently persuaded BIL to assemble the computer desk so I could get a start on cleaning up the office. Or at least use it. And I rather sheepishly persuaded BIL to put up the small TV shelf, a matter which looked very simple but required the skill to make it level, which eludes me. It turned out to be one of those three-trips-for-tools-supplies-and-etc jobs. Frowny face.

Sister and BIL still live in two places, although they're slowly transitioning up to the mountains. That gives BIL lots of honey-dos to do in both locations, and I don't want him to feel like he has to do my honey-dos too. Enough is enough.

Negotiations went back and forth and sideways and Craig-the-contractor and Tom, his do-it-all-employee, agreed to put the bed together and install the closet (at which point we determined that men seem to need to be reminded to count the parts in the box and start by opening -- if not reading -- the instructions). Craig finally consented to come back and put the rest of the things together once all remodel and construction-related tasks are complete.

After watching Daughter successfully tackle the Cubeical, I planned to put together the display shelf, but when Sister and BIL came back to the mountains last week and Sister appeared at my house, she announced that she and I were going to consolidate the non-sewing stuff that was stacked in the center of the quilting studio with all the stuff stacked in the middle of the former office-turned-guest-bedroom, and bring some order to it. Furthermore, BIL would be over a little later to put together the display shelf, considering it to be fun, like playing with an erector set.

We did and he did. That long black box on the bottom of the shelf is the wireless receiver for the sound system. The stupid thing sticks out from the wall about 13 inches. It used to sit on a buffet behind the table, but that has been moved. I puzzled for a long time about what I could put it on, and finally chose this display shelf, where I can also place the second rear speaker, and can create a secure location for some art objects which my cats want to "play" with. BIL did this assembly. 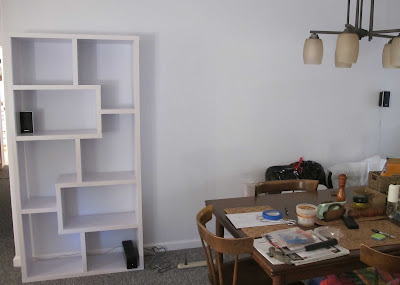 The shelving that I had in the mini storage is too tall for the new under-house storage space, so it has been temporarily enlisted to help in organizing the guest bedroom staging area. (Does that make it sound like things really will happen?) 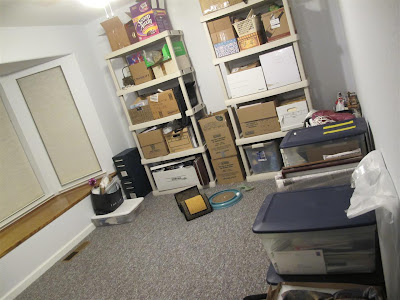 Here is a goodly part of the fabric stash that had been in the mini storage, now along the wall of the quilting studio, creating a large space in the center so BIL could return for more playing with erector sets by assembling the Aussie Kangaroo Kabinet sewing table! 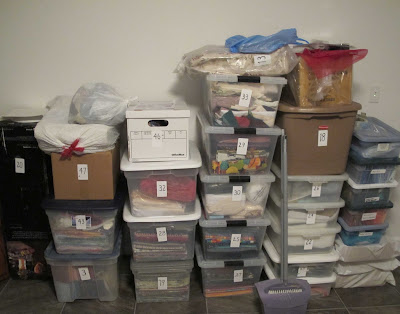 The Aussie arrived in four brown cartons that have been residing in the garage since a struggling FedEx guy deposited them there. A couple of those boxes weigh about 70 pounds. It took three of us to maneuver them on a hand truck from the garage, then through doors and hallways into the quilting studio. They look deceptively small in this picture. 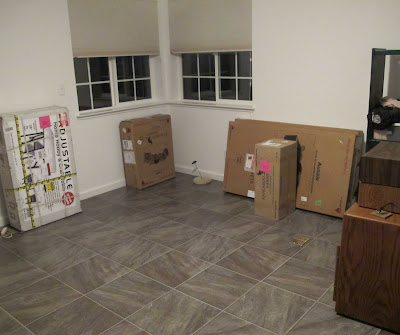 "Ready to Assemble" my foot. There was a lengthy and detailed instruction book, but we often relied on this picture on the carton to figure out how and what to do with mystery parts. 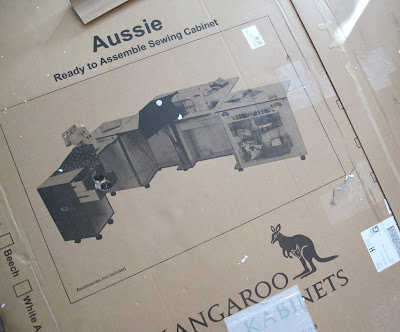 The Wizard of the Erector Set 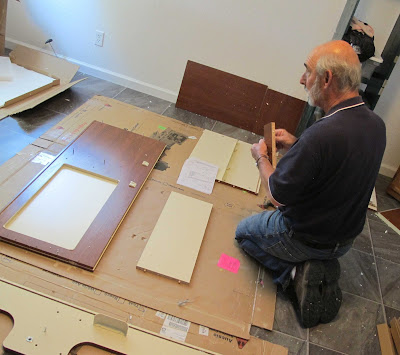 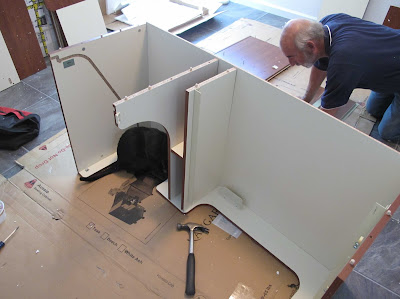 Sister holds one of the fold-out tops. 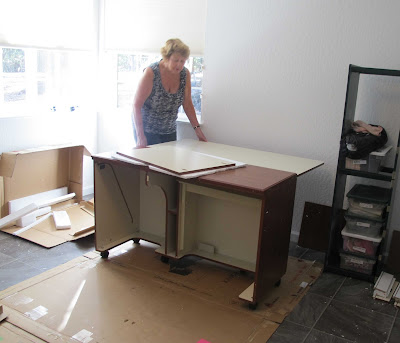 I was not completely idle while others worked. I'm getting to be the chair-assembly pro. The black one is to use at the sewing machine. The turquoise one was the freebie. It can be a guest chair, and perhaps go with me to quilt camp, a step up from the one I've been using. I hope the plethora of warnings attached to the seat bottom isn't critical. I neglected to read them. 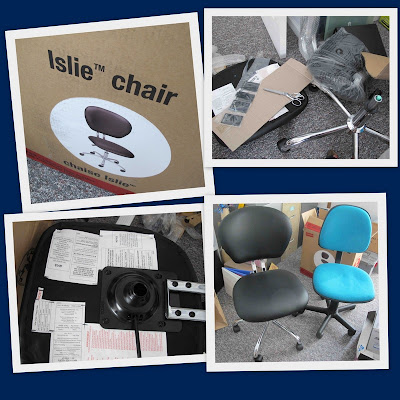 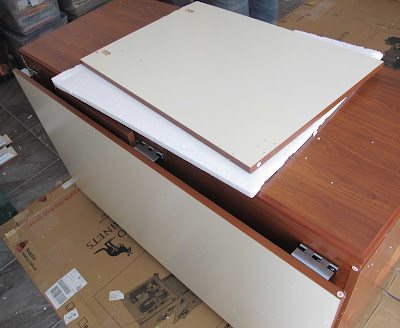 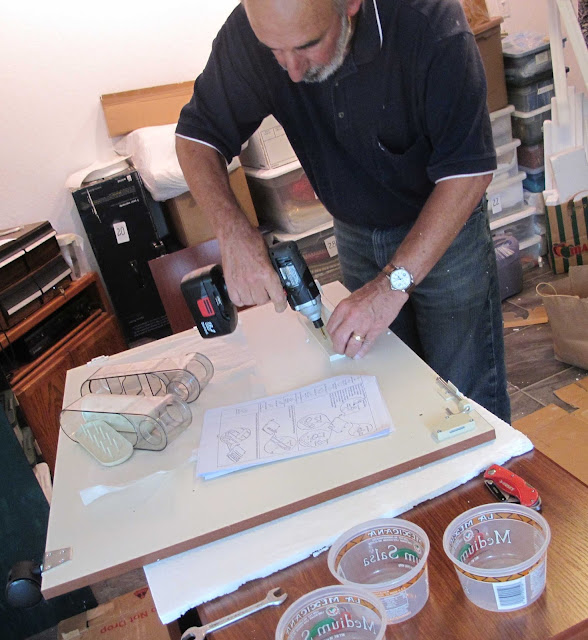 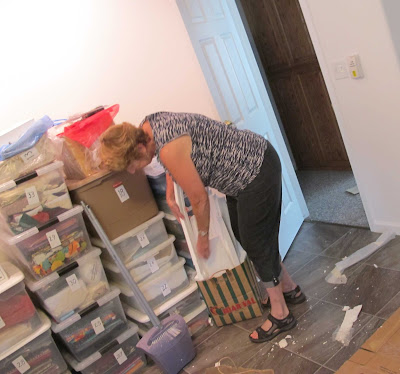 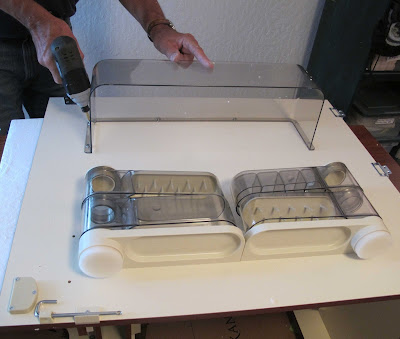 At the end of the second day with the Aussie, BIL declared himself ready for about two gallons of beer and we headed off to the pizza place. We sat outside on the deck at sunset. They shared a combo of some sort, and I had my personal pepperoni and mushroom. Yum! 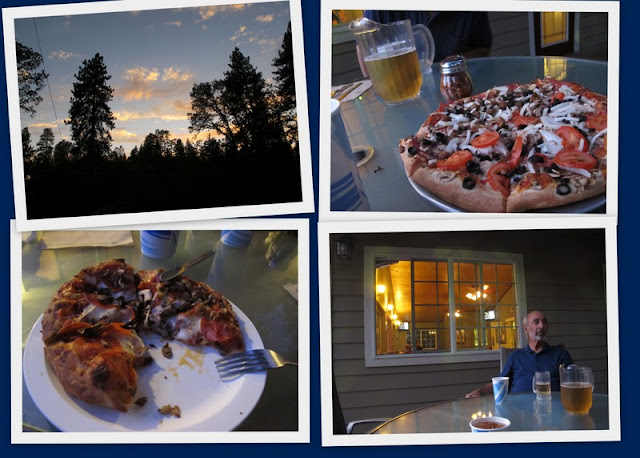 There it is, all folded up into itself. It's so compact. 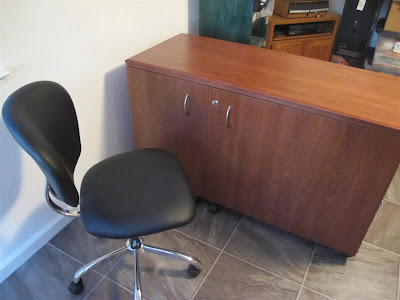 It came with a pet kangaroo. I'll have to keep it out of Jean-Luc's clutches. 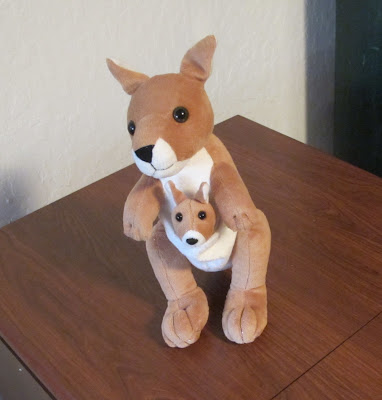 I haven't photographed my own Aussie fully unfurled yet, so I'll show you a fully stocked one from an advertisement. Building it ain't for amateurs. 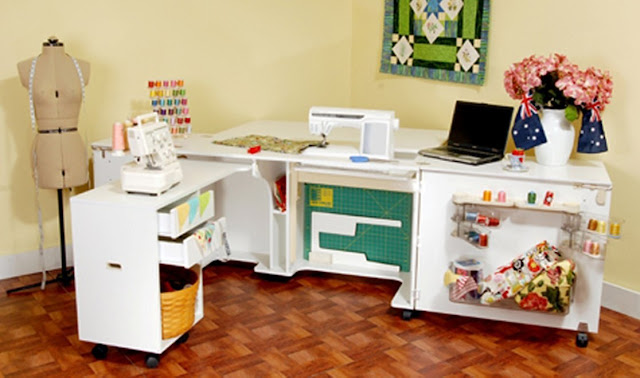 I think BIL may have had his fill of playing with erector sets for awhile. He has other things to do. I'll leave it to Craig to put the adjustable cutting table together and I have a few other projects . . . .