Tenterhooks when waiting through the fire season for the spark to fall, tenterhooks as you decide to stay through the night, and through an advisory evacuation after it turns into a torch. If I'd had a child or disabled person residing with me, I would have had to evacuate at 3:45 this afternoon when a sheriff's deputy came around to tell me about evacuation for our entire development. It's not yet a mandatory evacuation, nor can we be forced to evacuate against our will. As it is, I'm sitting tight. Keeping the window open tonight so I can smell the smoke if it comes this way.

The Rim Fire, as it is called, went to something around 10,000 acres during Tuesday. The numbers are a bit of a blur by now as I check in frequently to the incident website, a local news website, and several well-informed Facebookers.

Tuesday morning -- very early -- I woke up for the usual call of nature, and cracked the window open. The smell of smoke struck me, sharp like shreds of meat being burned off a barbeque grill. I had things planned for the day. Would they, or wouldn't they, go off as scheduled?

After two or three emails, the Soroptimist program meeting was on for lunch time. The speaker did her presentation before the business part of the meeting because she had already received evacuation orders in advance of the meeting. But before business was finished, the president was called out to evacuate her horses, so we adjourned precipitously.

The same flurry of queries preceded our computer users group BBQ Tuesday evening. We decided to go ahead with it and everyone who had signed up showed up, as well as several more. The dark smoke hung off to the east as a backdrop, but overhead everything was clear but for cute little clouds. (They may be cirrus. But they may not be.) There were enough of those in the sky for me to hang around after the BBQ was over to take pictures of the sunset over the lake.

A goose paddles by on golden waters. 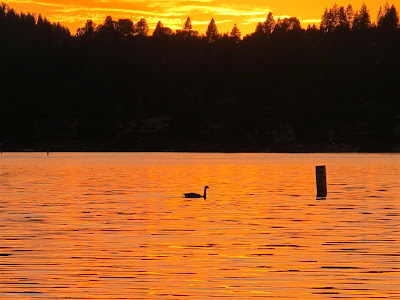 I still wait, until the sun goes completely down. 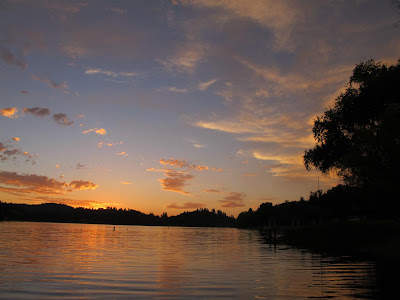 Once again this morning, the woods are obscured in a veil of smoke. My car -- still can't put it back in the garage after the room addition -- is flecked with ashes, and there are ashy splotches in the driveway, looking like they splattered there on the back of a raindrop.

The sun comes out and not long thereafter, I read a report from one of the sources that an inversion layer which had been holding in the smoke had broken and the fire flared up again. I hear the roar of a large aircraft and get a picture of a tiny dot. I believe it was the DC-10 which has been sent to help. We're up over 16,000 acres now. 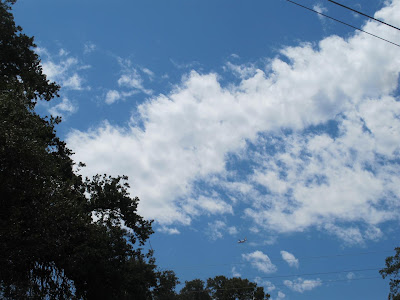 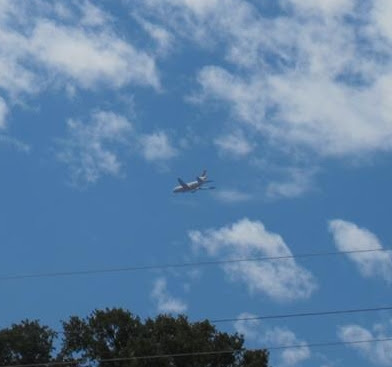 The sheriff's deputy knocks on the door with the advisory evacuation notice at 3:45. My daughter is on the way with my truck, which she has been using, to increase the amount of stuff we might rescue. I have a suitcase, my airline carry on tote, a small ice chest, some valuable papers, and three cat carriers poised in the garage to load in my little SUV. And my passport so it won't burn up and keep me from a pending trip. At four, white smoke billows up pretty much due east of me. 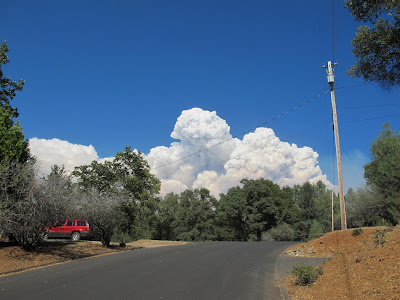 Daughter arrives around 5:15. The smoke continues in the same direction with about the same intensity, maybe even drifting a bit farther away. We take the chance and go out for a bite to eat. There are no road closures between my house and town. She had no problems with traffic or roads getting here, but she could see the tall column of smoke from many miles off.

We settle in for the night, noses to the breeze for any change in conditions.

Hope to see you soon.