A Tasting at Château de Montfaucon & Lost in Translation

Yup! This is my 400th edition of Traveling Sardine Class. On the one hand, it sounds like a heckuva (my spell checker prefers "helluva") lot of blogs. On the other, it falls far short of my intended goal of blogging daily since I set out on this journey on January 7, 2011. It's been way more than a week, for example, since I brought you our visit to Avignon. I've been caught up in preparation for the next trip as crafter of the little pocket itinerary/diary books for the participants in Jeanne Mills' tour for quilters. They were sent off Thursday to Jeanne. I whipped out the camera to get a photo of them as I was about to tape the box to mail them and got an error message from my camera about the impossibility of doing this, so it goes unrecorded.  And then I got caught up in catching up with my favorite blog that deals with current events . . . and hundreds of comments.

There's also been a little mission creep over the years, from hopscotching overseas by cheapest fare in Sardine Class, to taking the nonstop flight on the California/across the ocean leg (a lesson learned in missed connections), to upgrading to Sardine Class Plus. That bit of extra seat room and tray-table surface takes the edge off the ten to twelve hour flights.

In Flash Tour of a Popely City, I showed quite a few pictures taken from Le Petit Train tour, but didn't show much of the train itself. Later I found these photos from a previous visit of the train, back when it had its "real" engine, instead of the current utilitarian, truck-like version. It was -- and is -- a wonder to see the train wend its way through this narrow street.

Last time I also showed you a picture of the most awful croque monsieur I'd ever eaten. Here's a much better one. The croque monsieur, that is, not the photo . . . . 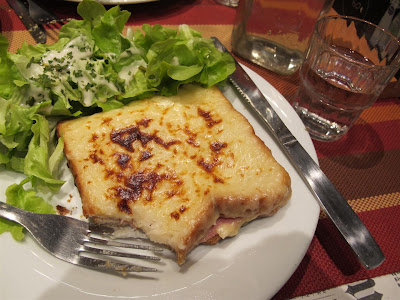 After lunch in Avignon it was off to a dégustation (wine-tasting) at Château de Montfaucon. I went to its website to find out a few factoids about it (link: Château de Montfaucon). It's a very good website, clean-looking, well-organized, easy to navigate. Too many French website developers seem over-impressed with gee-whiz special effects that leave one more bewildered than informed.

The chateau is located just across the Rhône river from Châteauneuf-de-Pape, a wine region you may have heard of. Its 45 hectares of vineyards are spread out between Roquemaure and St Genies de Comolas. The vines are up to 90 years old, with the average age of 40. They are farmed at low yields.

The first inhabitants of the location extend from pre-history, finding natural refuge in the caves that overlook the Rhône.

The first tower of Montfaucon dates to the 11th century, along with other fortifications that were strategically located along the river to guard the border between the French Kingdom and the Holy Roman German Empire.

The first baronet was awarded in 1420 by the King of France, and the chateau was extended to a triangular shape at the time, which it still retains.

The first winery at the bottom of the chateau still has the vaulted cellar from the 15th century which was where the wine was made until 1936.

The first appellation of Côte du Rhône was awarded to 11 towns in 1737 by orders of the King's Council.

The ancestors, the de Pertius family, followed the popes to Avignon. They acquired Château de Montfaucon in 1766.

The chateau, restored in the 1880s with a Scottish facade while retaining the unique triangular shape, is the only one inhabited today.

Let's go inside the winery.


From 1936 to 1995 the family cultivated vines, but sold the grapes to a cooperative. Following agricultural studies in France and California (UC Davis), Rodolphe de Pins took over the family estate in 1995 and made his first vintage in Montfaucon that same year.

Rodolphe (Rudi) took us into the cellar for his philosophy of wine production. There are several different schools of thought on proper wine-making which, as a nondrinker, I didn't absorb much of, but his is touched upon on the website. 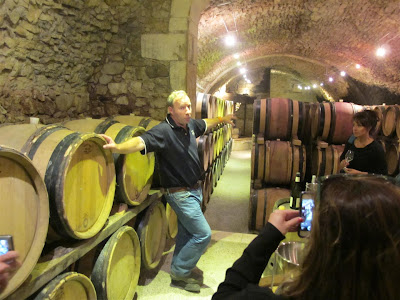 He takes us through the cellar


Now of course, on the way back to the villa, where better to stop than at the chocolatiers, with its warehouse-sized display of chocolates? Last time I was here a got a box of small chocolates and allowed myself one a day until they ran out. I splurged a wee bit more this time, because I was trying to find what I bought last time but didn't know which one it was. They must be sampled. 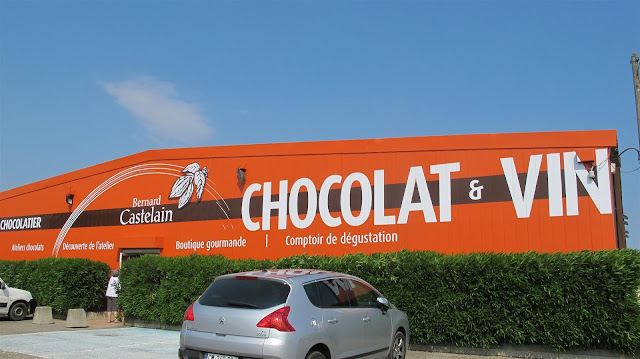 It was time for our two cars, stuffed with tablecloths, santons, wine, chocolate and other purchases to head back to home base, where dinner plans were "on our own." Sister had, for several on-our-own evenings, wanted to get Asian food and the closest seemed to be Vietnamese with a Chinese touch. It hadn't come to pass before because, we'd eaten so much during the day that we weren't hungry enough to go out evenings or we'd already walked too far for the day to make the effort to go out again.

This was the night. Sister, Linda and I went out in search of Asian food. My memory is a bit foggy about our dinner disaster part of it. It was really rather funny. None of us speaks Vietnamese. Nor even Chinese. I speak and understand French somewhat, but not fluently. I don't think the waiter could understand our English or my French and we couldn't understand his either his French or his English. And we were trying so hard to appear to be sophisticated dinners as we puzzled over the menu.

In retrospect, I think what we didn't comprehend was that the items on the left page were served at lunch time only, and that we couldn't order a whole meal separately. And our food preferences are completely different from each other's.  We each ordered one main course, one starch course, one vegetable course. The waiter was amused but dutifully brought three mains, three starchs, three vegetables, all served in quantities for the whole table. He realized that we eventually realized where our error was and he graciously brought take out boxes to us to bring home the surplus food. (Not done by the French.) There was smiling and laughing by the end, but a bit of embarrassment, too.

Sister used the leftover rice for subsequent meals, but I don't think any of us had been really thrilled with our choices. Lost in translation.

Next, I should catch on on current events, although there's still more from Provence I'd like to share. So, soonish.