If you Google "cypresses in Provence," most of the search results come up referencing van Gogh, with this painting as a prime example.

Each day as we head out in the car, we whiz along straight roads -- for some part of the day's journey -- bordered by grape fields and distant rows of cypress (also skyrocket juniper).

Nearly every day, I touch Beth on the shoulder and bubble, "I love this place!" Yes, bubble. I can barely contain the grins.

This day we are going into the heart of van Gogh country, Saint Rémy-de-Provence. We'll visit Wednesday market and find a spot for lunch, then go a little south of town to Mausole Saint Paul, where van Gogh spent a period hospitalized, and/or Glanum, an excavation of a Roman city. 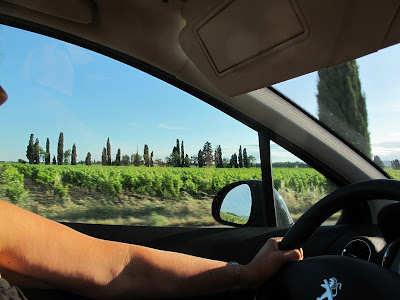 I've been to Saint Rémy numerous times, and despite an image of being very touristy and an expensive place to live, I love it there. I've seen Mausole Saint Paul and its gardens in various states of bloom, and differences in Glanum as excavation slowly continues. I stayed in town for a week to attend language classes a couple of years ago and learned to get a little less lost in the old town center, where streets take off in different angles and you never quite know where the radius you've chosen comes out on the perimeter road. This made me official guide for Sister and Linda. I also was set on having my favorite melon avec jambon cru and café liègeois for lunch, whether or not my companions liked my choice of venue!

We plunged in. Market tables and stalls snake throughout the old town, with one parking lot area off to one side that is covered with umbrellas. Elaine spots the little pink car (no, the little one, not the big Buick one). She wants it. It appears to her to be a Bugatti. I know nothing about Bugatti except the name. I Googled it. 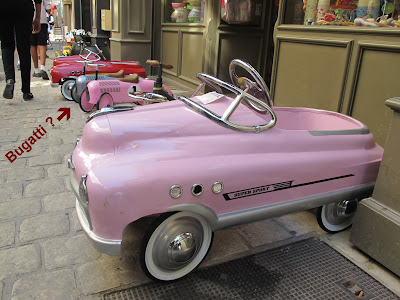 I think this must be the model. I wanted to get it for her birthday (the pink one), but didn't think it would fit in my luggage. Actually, we would be flying home on her birthday. Perhaps in her luggage?

We heard the sound of a familiar musical voice wafting through the streets and wandered into the square where Leonard Blair was playing with his group. We had hopes for a new CD from the group but that appeared not to be the case.


Colorful paintings with reflections in a window. What's that red figurine in the foreground? Looks like a porpoise jumping, but it's a horse, with his neck arched and his chin down against his neck. 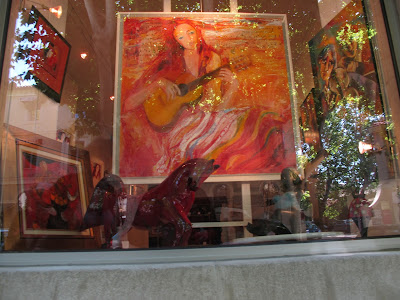 I took this picture for a friend whose last name is Barth. It turns out this is a big annual regatta. 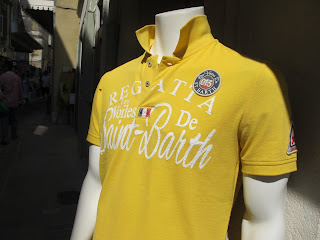 Ah! Here it is. La Fontaine. The melon avec jambon cru for lunch. The Cavaillon melon is the juiciest, sweetest, most luscious melon I've ever tasted and this one did not disappoint. 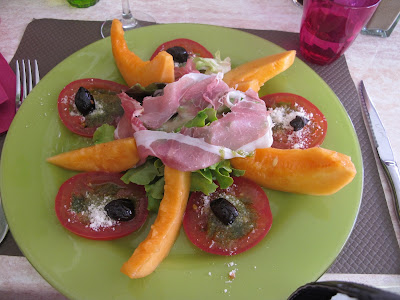 They didn't have café liègeois on the menu (at least under that name) so I asked for it. A big beaming smile from the waitress assured me that it could be done, so we all ordered. I've had them various places, but, here, they are best ever. Recipes may vary, but this has got cream, coffee ice cream, perhaps some kind of liqueur, chantilly cream, and few crunchies, then a shot of strong, hot espresso that you pour over it yourself. 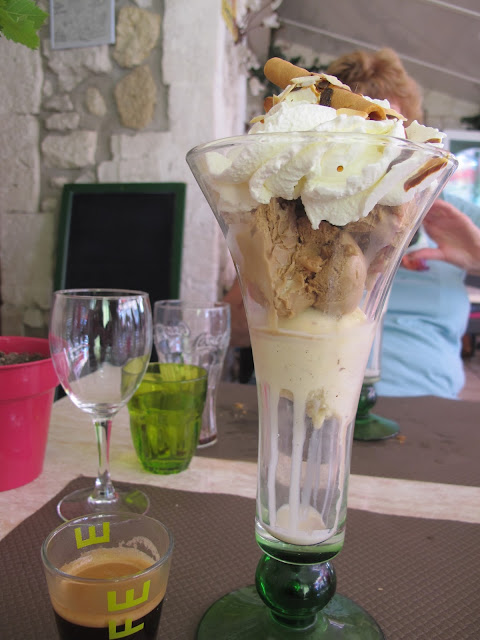 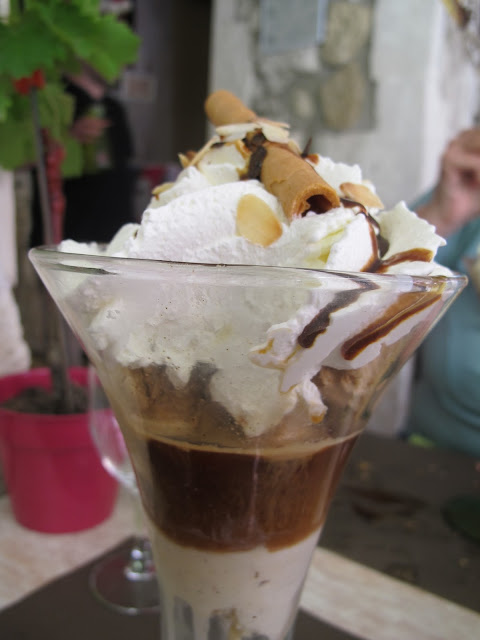 Market was over by the time we finished the meal, but we still had time before our rendezvous to stroll through the street looking at the shops. I admired the cute pants on the mannequin but never considered them for myself. I  already bought a gauzy blue shirt, but after admiring this one, the sales woman invited us in to look at shirts in other colors. I tried on a grey one, then consensus was that I should find matching pants. The "One Size" pants that came with the shirt didn't include my size, but the young woman brought me pants that turned out to be the "button pants," as I'd been calling them.

There was this other cute outfit out front, but it's definitely for the young and svelte. 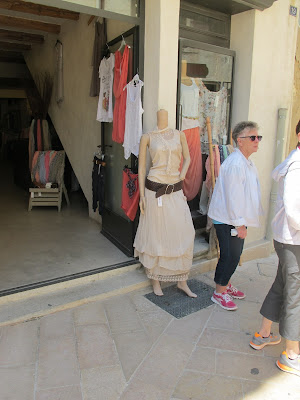 Everyone in our two cars except Sister and me went to Mausole Saint Paul to walk in the steps of van Gogh. Sister and I had gone there on our trip here two years ago, so this time I wanted her to see Glanum.

We started our tour by going the opposite direction as the suite de la visite (direction of visit) signs. The visit starts at the downhill end of the excavated city and continues uphill. I proposed we climb higher to overlook the whole scene, then wander downhill.

We climbed, higher but not highest. I'm so unsteady on foot to get too fancy. In fact, I forgot to bring my own walking stick, so Sister lent me hers, and at one point, we shared. We're looking down on it at about the middle. 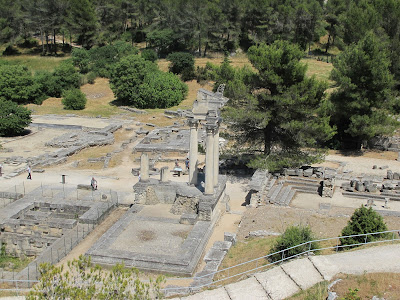 Looking downhill, toward the highway to Saint Rémy. 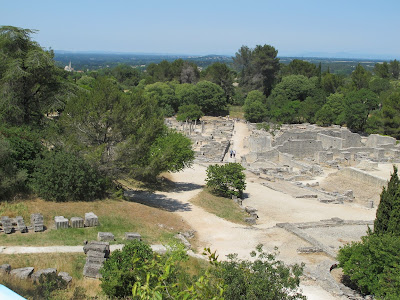 Back up the canyon. That's Sister with a turn at the stick to get down the stairs. 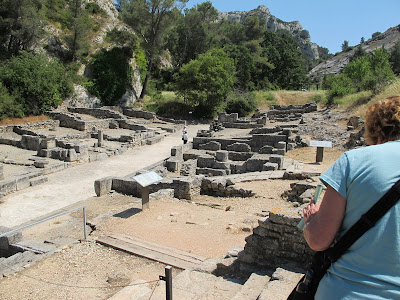 This big stone step is amazing, obviously having been formed under water. The embedded shell (a scallop?) is about three inches across, to provide some scale, and there were many smaller shells embedded in it as well. I didn't see this in other stones nearby. 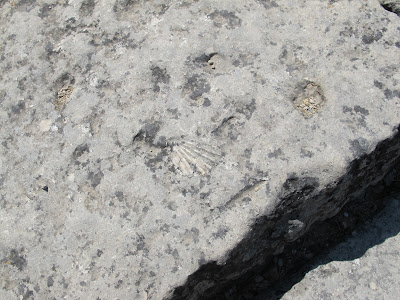 We were up there, not at the top, but at one of the intermediate levels. That's where I was taking the overlook pictures. 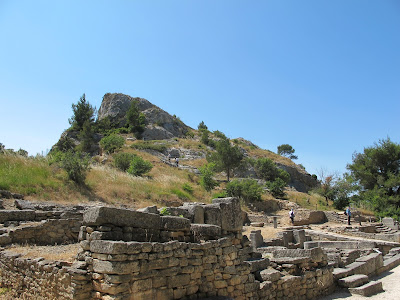 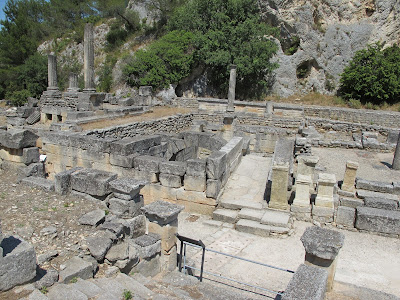 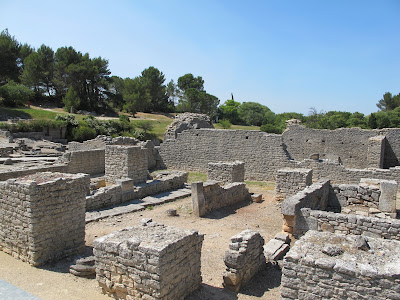 I bought a novel in the Glanum gift shop, in French, about the Roman era. It's targeted at young teens, and translated into French from English. It's my hope that it's at a reading level that I can follow with some ease. I discovered after I got back to the villa that it's book 2 in a series of 3. You may or may not know that I have a pretty good collection of Roman detective novels (in English), so my reaction was that "I must get the series." I looked around a little in France, but discovered I can order the other two online, which means NOT having to pack more books. One has arrived, the other has been sent. I'll post a photo of the whole lot when book 3 arrives.

Heading back home past grape fields and cypress trees. I love this place. 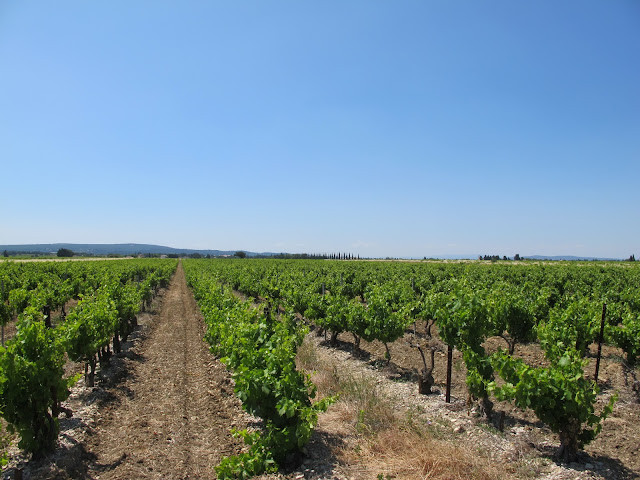 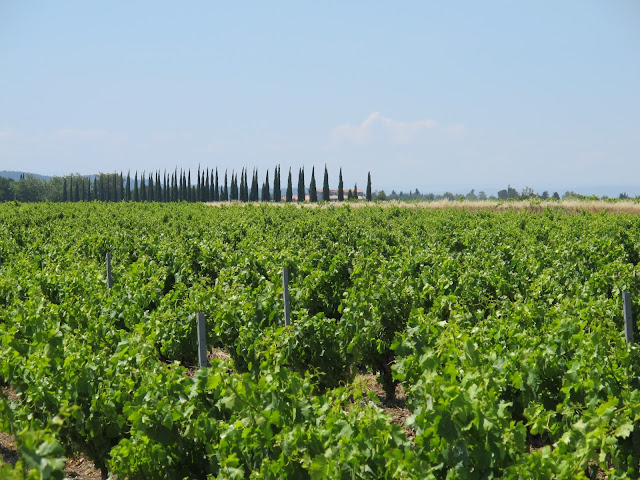 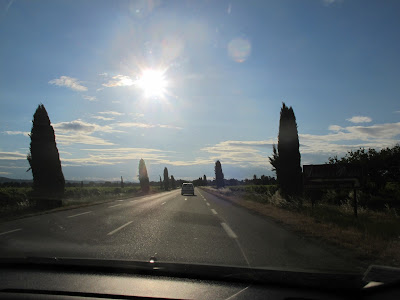 And, as promised much earlier, I've scoured up a photo of the front door of the villa, shuttered up against the heat. This year we have more chill from the mistral than heat. 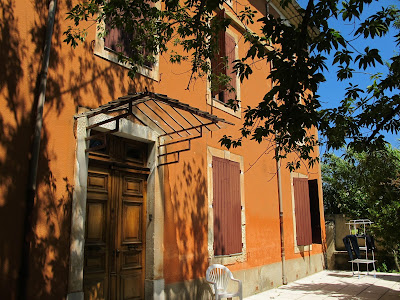