It was the thing we came for, photographing lavender fields. We woke up to the winds that had been hinted at the evening before, but it was sunny, with a forecast in the 70s. We headed out through the countryside and up into the hills northeast of Sainte Cécile-les-Vignes. We stop at an overlook of Vinsobres, take a few photos, then continue higher. Click the photos to see them enlarged. 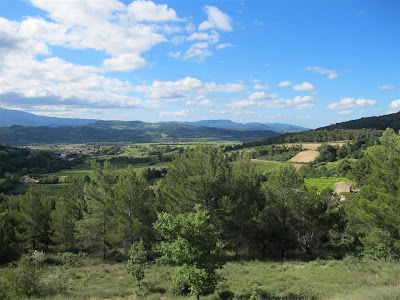 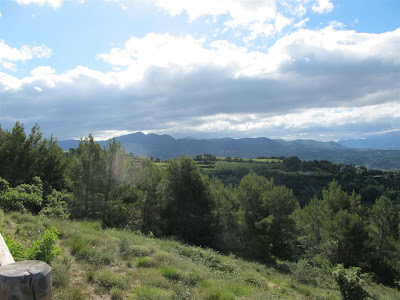 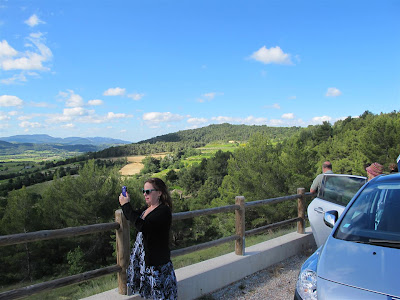 We arrive at the lavender fields. Those of us who've been here before know that these are not as lush as usual. France has had an exceptionally cool spring and early summer, and lavender is running two or more weeks behind. We hope for warmer weather while we're here to boost the flowering. We haven't even seen any sunflowers, which are usually as tall or taller than we are.

Lavender only lasts so many seasons before it is taken out and crops are rotated. See the little trees growing between the rows? The word is that they are oaks and they are being grown with the hope that they'll attract truffles for a successor crop to the lavender. 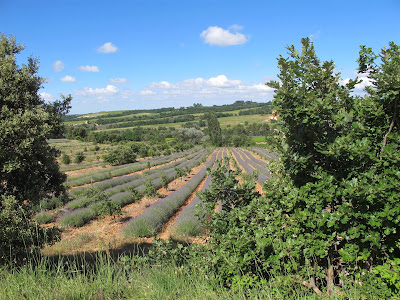 The wind is cold and piercing, whipping Beth's hair and Lisa's skirt. I've worn a long sleeve shirt over a sleeveless top, which does little to cut the chill. 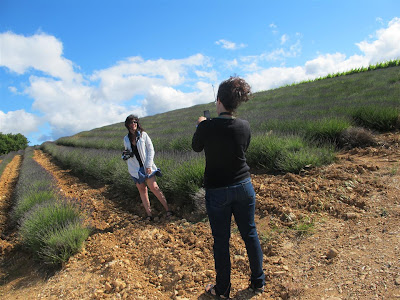 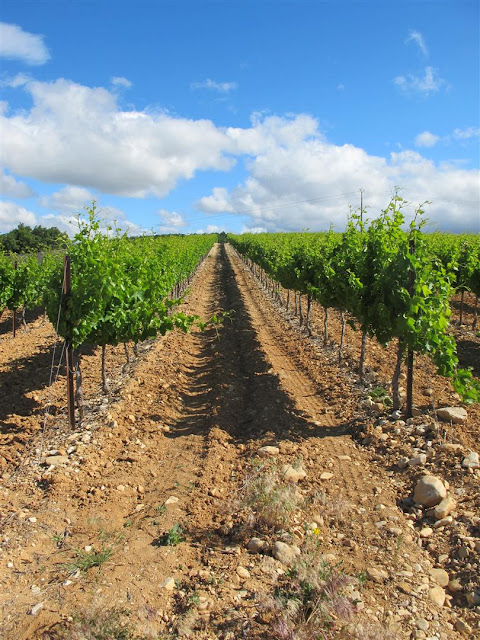 Mont Ventoux is still in clouds in the distance. 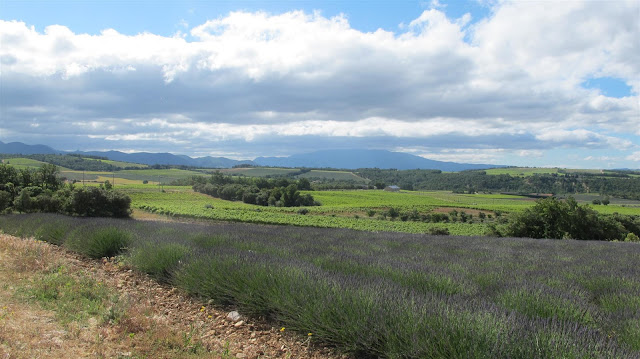 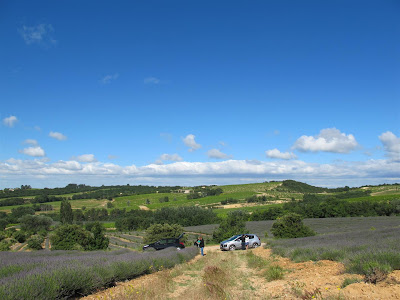 Still beautiful, despite the immaturity of the growth. 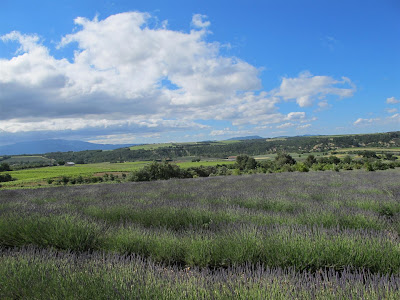 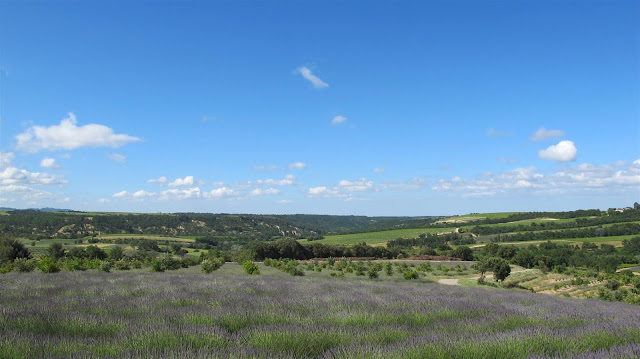 But the cold shortens our stay somewhat, and we head down the hill toward the other side to Valréas to go to the InterMarché to grocery shop for meals that we'll prepare on our own on several days, starting with lunch today. 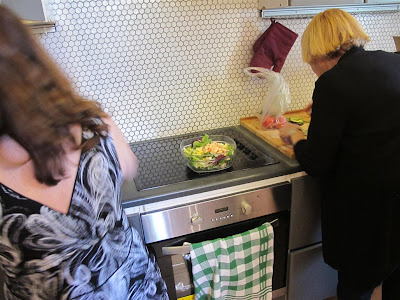 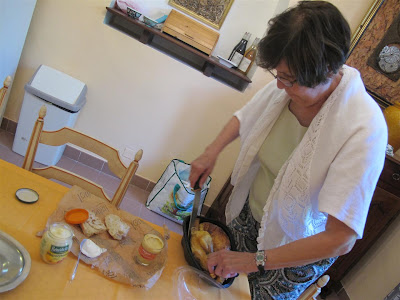 And there's a little laundry to do. This little French washing machine doesn't hold much but it's easier than washing things out in the bathroom basin. It takes a training session even to find out where to put the clothes. The first time I ever saw it, I got the view in the lower right. Training sessions involved how to open and close the drum, add soap, start it. I never did do the whole thing solo. Then wait ninety minutes for a load to finish. 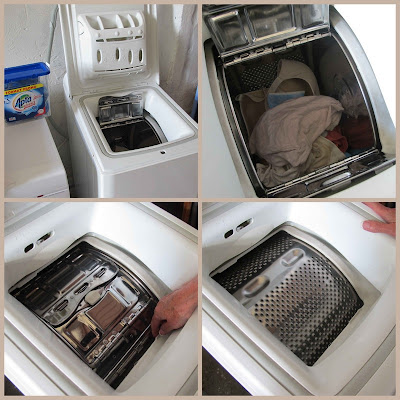 In the late afternoon, we had an optional visit to the picturesque perched village of Séguret, one of the Plus Beaux Villages de France. I'd had a shot at it in an earlier year, but we'd approached it from the wrong direction and I hadn't made it very far into the village. This time we came in the main entrance. Sorry for the finger on the lens, but I didn't notice it until too late to take another shot. 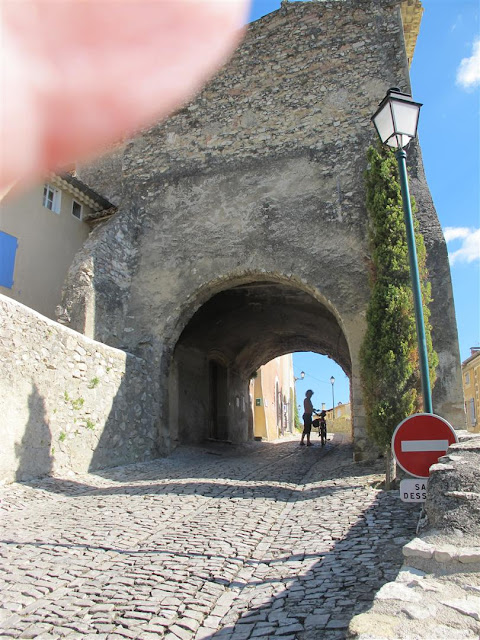 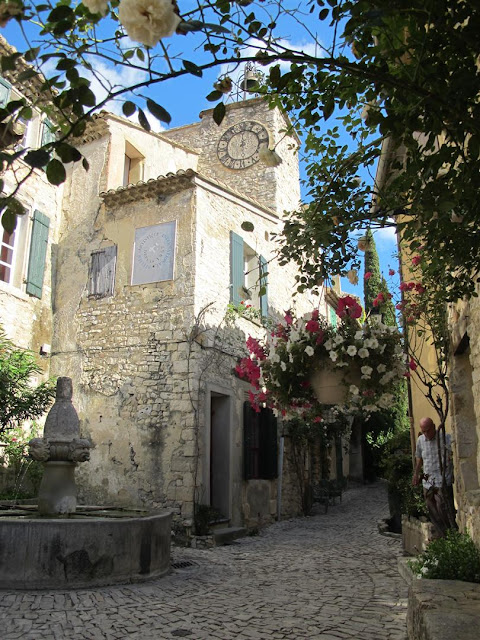 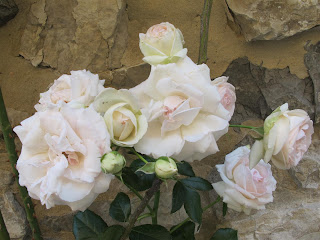 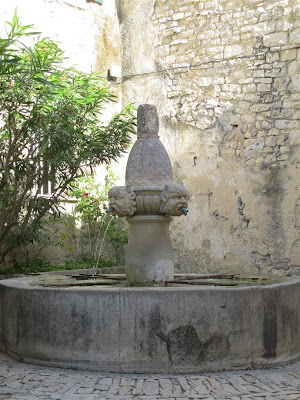 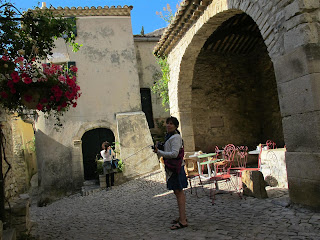 We stopped for cones, ice cream or sorbet, and I think this must be where I had the apricot sorbet that tasted like biting into a juicy ripe apricot. 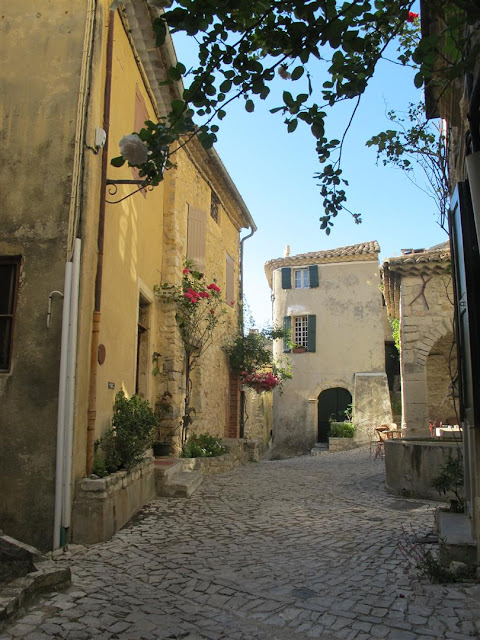 We didn't get far enough nor high enough into the village to see the ruins of the castle in the time we had left for the visit. 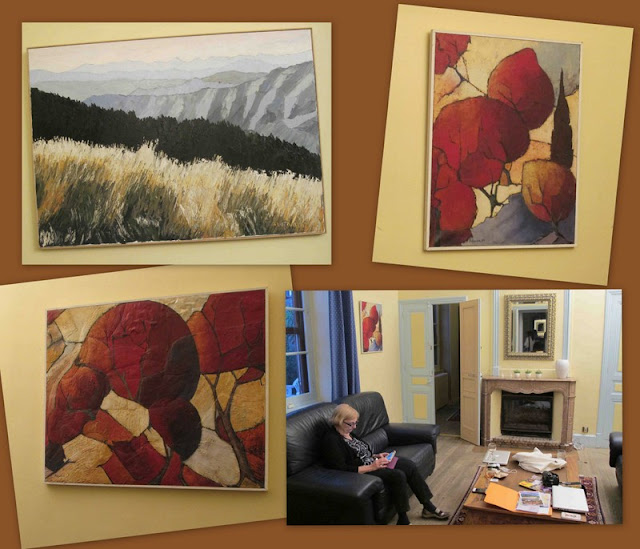 Since it was too cold to sit out evenings on the terrasse, some spent it in the, well, I suppose they call it a salon, but nobody referred to the room by a name. Everyone had their electronic toys for posting or processing photos and sending them to one another. Linda is playing here on her iPad Mini, as a couple of temporarily abandoned laptops sit on the table.

Then it's time to fold our tents for tomorrow's 9 a.m. departure.