We got to sleep in a little later on our first full day than is usual for a trip to market in l'Isle-sur-la-Sorgue, --as a concession to our jet-lagged selves. We would depart at 9 a.m.  For slow-poke me, that means getting up at 7. I had put in my special request to the breakfast-fetching team (Lisa and Beth alternate days) for pain au chocolate, or what can be described as chocolate croissants. There was an ample supply on the table for us, along with plain croissants, other pastries, and baguettes.

The name "Isle-sur-la-Sorgue" means "Island in the Sorgue river." A well-known market takes place each Sunday in the streets of the island. In addition to the market goods which are sold at markets in many villages and cities throughout France, l'Isle-sur-la-Sorgue also draws additional crowds for antiques, available both at market and in the shops that rim the island. In other words, it gets really crowded. Between 11 and noon, the jam of people almost comes to a standstill. Best to go early.

Sister, Linda and I rode with Beth from the villa to market. She let us off at the head of the island, which seems to be the place where the Sorgue splits to create the island. A terrific volume of water flows in this river, which springs from the earth a few miles up the road at Fontaine de Vaucluse. 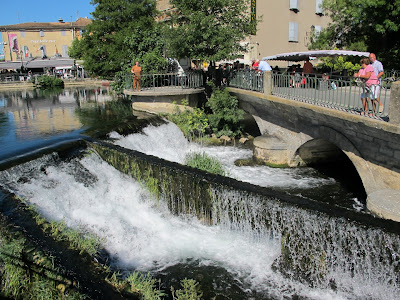 Market is a colorful place. 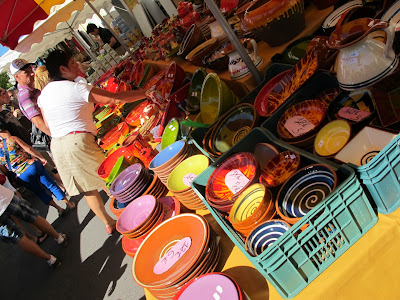 A Dad and his Little Guy inspect the Sorgue. Mom came along after a bit with a stroller. Little Guy had a meltdown that could not be assuaged, which I never did figure out. 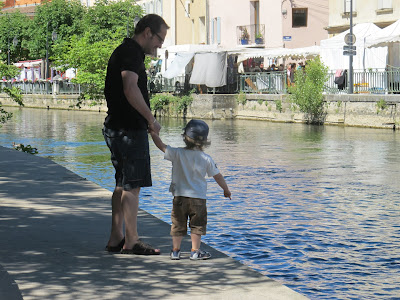 Then there was an interesting event. This guy tossed a little flat boat off the bridge and jumped precariously into it. He poled his way over to the opposite bank and picked up a woman and big dog. It attracted attention, for one thing, because there is a small waterfall just down river from here and this is hardly a whitewater craft. In the lower right corner, the girl and dog are obscured. He began to pole upstream toward the bridge. This is a low bridge. 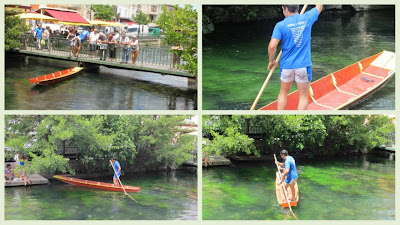 The girl has flattened herself in the bottom of the boat, pulling the dog down on top of her. Then the guy lies down and they disappear upstream. It's not that far until they reach will reach the turbulent water intersection, so I have no clue why they did this. 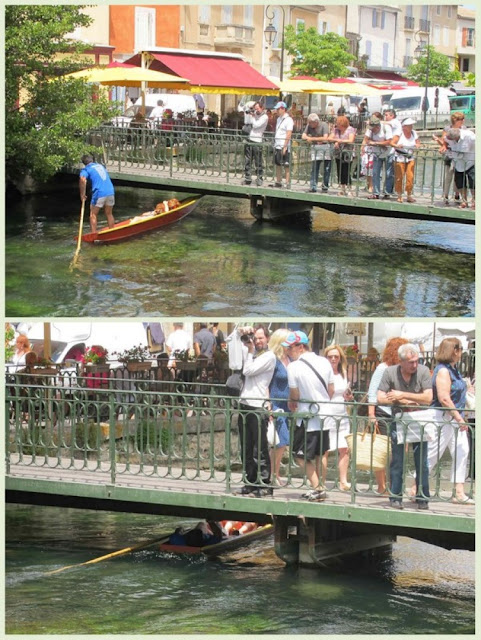 We got started a little late on finding a place to eat lunch. We made our choice by stopping at a little place that had shade and seats. We'd also hoped for les toilettes but discovered later that the place is too small to have one. Here's Linda, studying the menu. 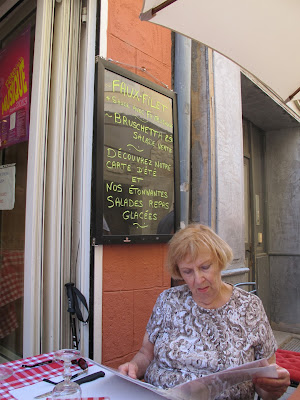 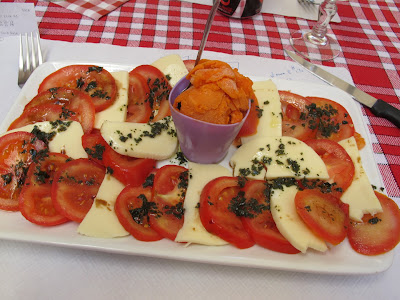 We asked about les toilettes and the proprietor directed us to a "very clean public restroom" just down the road 150 meters. Rather more than 150 meters later, there were others milling around the building. Closed on weekends. Who decides to close a restroom on weekends when there are thousands of people attending market? Little kids, moms, dads, and old ladies hurried away to find alternatives.

Oh, purchases? I got some yardage to make kitchen curtains, some salt "of exceptional quality" from the Sahara, Sel de l'Azalai, whence it has made an amazing journey (read about it at the link!) now to California, and pepper (Poivre Sauvage) from Madagascar.

After market, we headed back to the villa to regroup and rest up for the rest of the day's activities. Here's one of the roundabouts on our way home, with its distinctive statuary, two giant hands and some grapes, likely contributed by the wine growers of the Beaumes de Venise appellation, one of which is right by the roundabout. 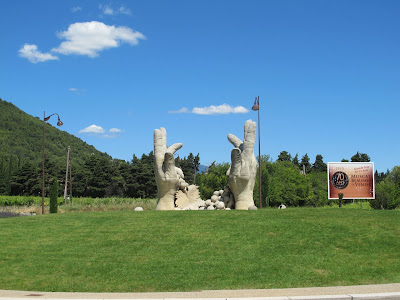 Once we all managed to run safely out there between speeding cars, we said, "Climb it, Lisa," so she did. She started a small trend. (I did not climb. The run was my best effort.) 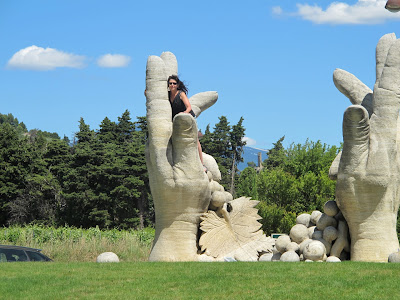 We had a late afternoon dégustation (wine tasting) scheduled at Domaine Rouge-Bleu. This organic winery, built by Kristin and Jean-Marc Espinasse, has changed ownership, now being run by Caroline and Thomas. You may know Kristin as author of the blog, "French Word-A-Day." I've visited Rouge-Bleu on two previous trips there, getting acquainted with Kristin and Jean-Marc (alas, I don't drink wine, so can't comment on that), who are a delight. I was disappointed when I heard they sold the grape farm (as Kristin calls it), afraid I might never see them again. We returned to the grape farm, meeting Caroline and Thomas. They are quite knowledgeable about wines, and also delightful. I wish them well in their enterprise, and hope I can find a way to see Kristin and Jean-Marc again sometime on their new adventure in Bandol. 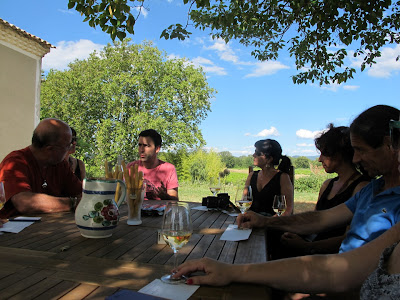 Later in the evening, Caroline and Thomas came to the villa for dinner. 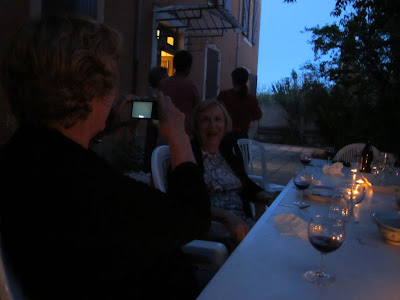 Then the photo-attempts at capturing the super moon began. No one did really well, but at least you can tell here that it was big and bright. 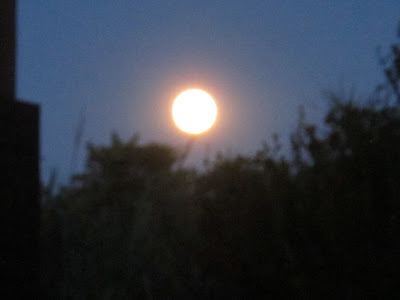 It may not surprise you to learn that I didn't have the energy to blog this long day at the time, putting me in a permanent state of arrears on reporting on this trip. I'm full of admiration for Nina Camic, who does her "Other Side of the Ocean" blog every day, even while traveling. Can I plead being a whole lot older than she is???