I had photos ready for this edition of Thursdays Out ready to go late Thursday evening, but ran out of steam before posting, putting it off until Friday morning. Daughter called earlier Friday morning than I expected that she was on her way to my house, so blogging was abandoned in favor of a bit of quick straightening up. She was here to do some "heavy lifting" -- of which more later -- and it didn't seem right to sit here blogging while she was working her tail off, so I contributed my light-weight help.

Thursday was one of those kind of days that will sometimes create a glorious interlude between sweater weather and swimming suits. It happened that Thursday. We went into a chilly Little House in the morning for NeedleCrafts and emerged into a lazy, balmy breeze with blue skies and sunshine, whose spell lasted long into the evening.

For a near-summery day, there was a whole lot of woolly knitting going on. Sandy showed off this nice hat, and contemplates gloves, perhaps the fingerless type, to go with it. 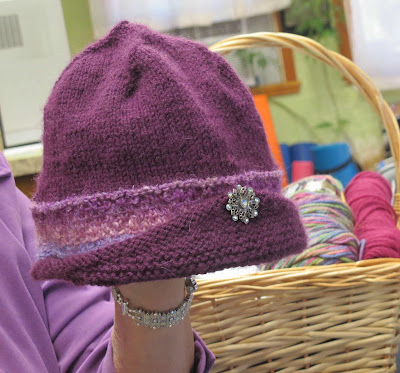 Paula is almost done  with this beautiful little pink sweater and hat. It's more the pink in the top photo than how it appears in the second. 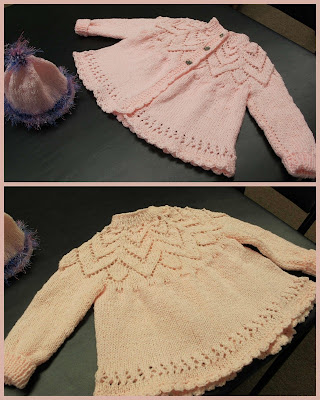 Judy asks Rose to interpret the instructions for knitting this silky little baby sweater up over the shoulders and down the front. 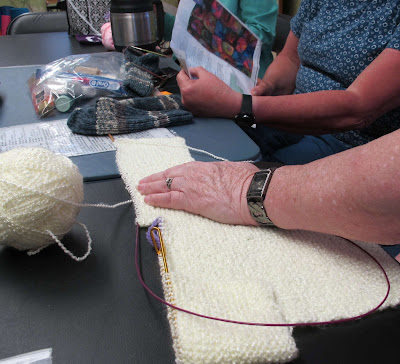 Meanwhile, chez moi, Tom was busy finishing up assembly of my closet. We can't really see it in full panorama, because at least one side of the mirrored doors is closed at any given time. It's just a little short of done here, as he had to bring his saw back to shorten the boards for the  shelves over the clothes rods. 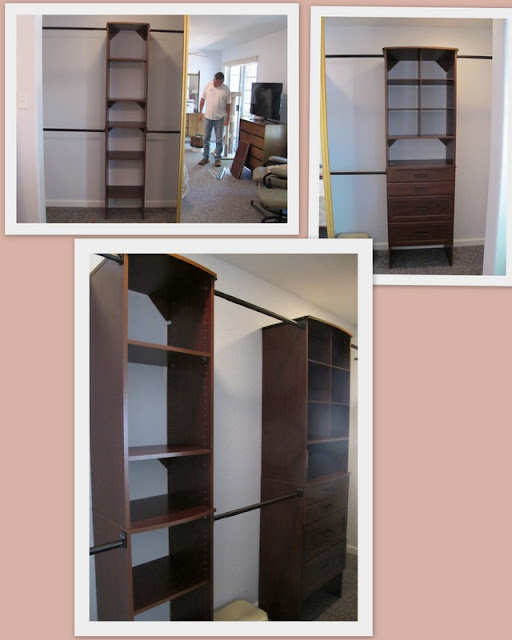 I'm on the fifth block of my tile quilt applique for the quilting I do at NeedleCrafts, but have a trip prep project I'm working on at home: one of my infamous pocket itinerary/diaries for an upcoming trip. I make four pages out of an ordinary sheet of paper, printed front and back. There's a pattern to this to make it all work out properly, but I always have a hard time getting the beginning sequenced right. I thought I had it with my little 2x2 boxes, but I don't. I'm working on another initial template -- based on rows rather than pages -- that I'm hoping with be universal, i.e. it will work for future projects.  (Don't worry about it. It's my own little quirkiness.)

Here it is, in all its glory. Here's hoping it works out. I'll know for the next trip after the pending one. 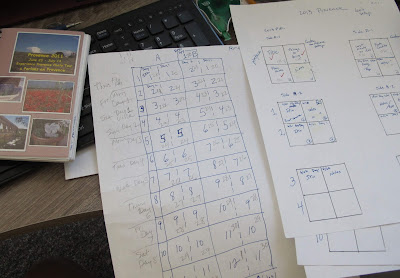 I'll catch you up on Daughter's and my projects next time.